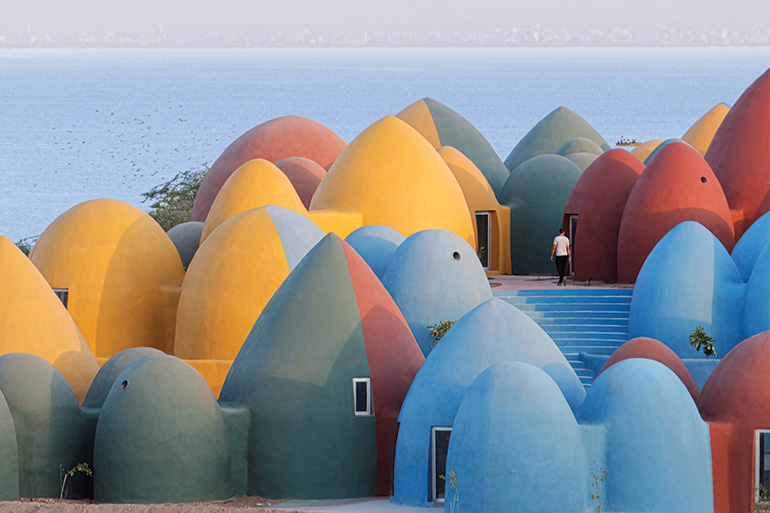 On Hormuz, off southern Iran, Zav Architects is creating an environmentally-sensitive complex that benefits community and visitors alike.

When it comes to hospitality, it might be difficult to find more generous and selfless hosts than the Iranian people. That’s underscored by the context: Iran is home to some of mankind’s most incredible architectural and engineering feats, from the Persian qanat water supply system in arid regions to the majestic Meidan Emam Square in Isfahan, as well as the country’s bazaars and religious buildings that have gone on to influence and shape the built environment of many other cities around the world. Even Le Corbusier was transformed by his travels in Persian territory, and that influence can be seen in the Swiss architect’s use of illumination and color in his religious and residential spaces. 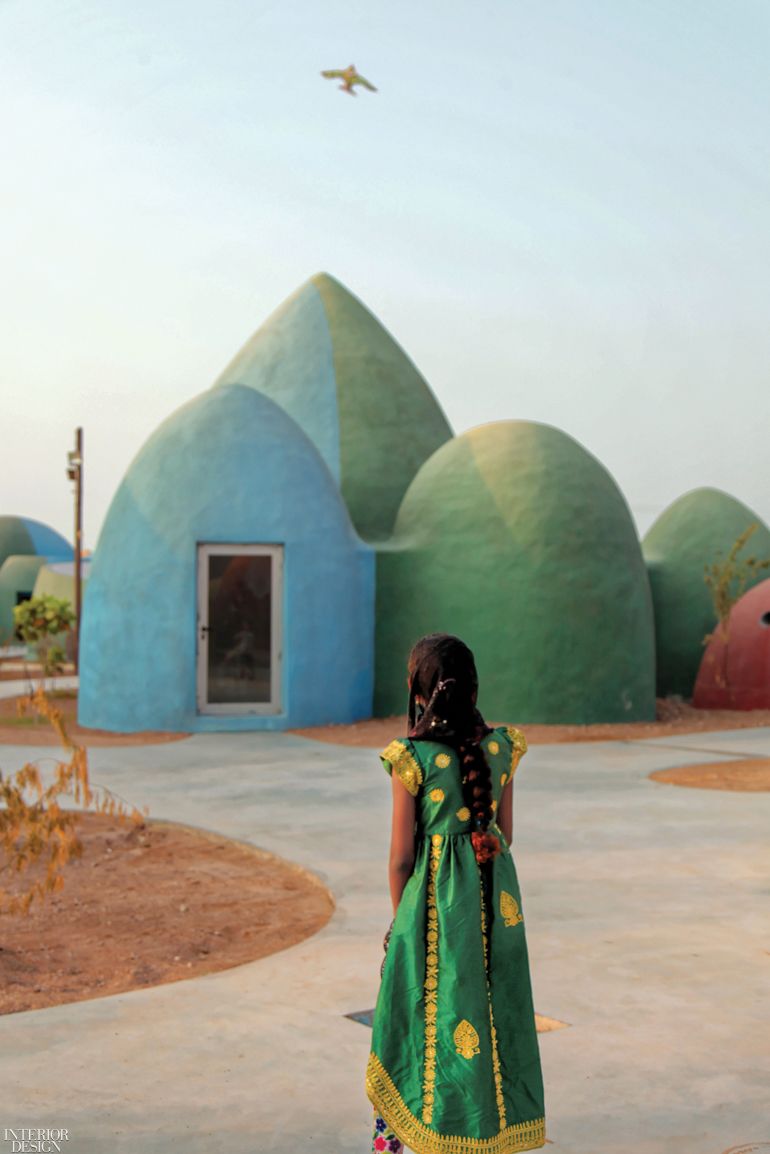 Majara’s domes recall vernacular Iranian typologies, such as the roofs seen in the desert city of Yazd or the long corridors of the bazaars around the country. Photo­graphy by Soroush Majidi.

While the principles of Western modernity seem to have taken over building culture in Iran in more recent years, studios such as Tehran-based Zav Architects seek to incorporate and reappropriate Iranian architectural tradition by working with local materials and construction techniques. Such is the case with a project on the small island of Hormuz, which opens up to the strait of the same name in the south of the country. Called Majara, it is a 17-suite guest residence that completes the second phase of Presence in Hormuz, an environmentally-sensitive, three-part complex by Zav that’s intended to draw in tourists and support the community. Zav, by the way, is a Persian word that roughly translates to builder. 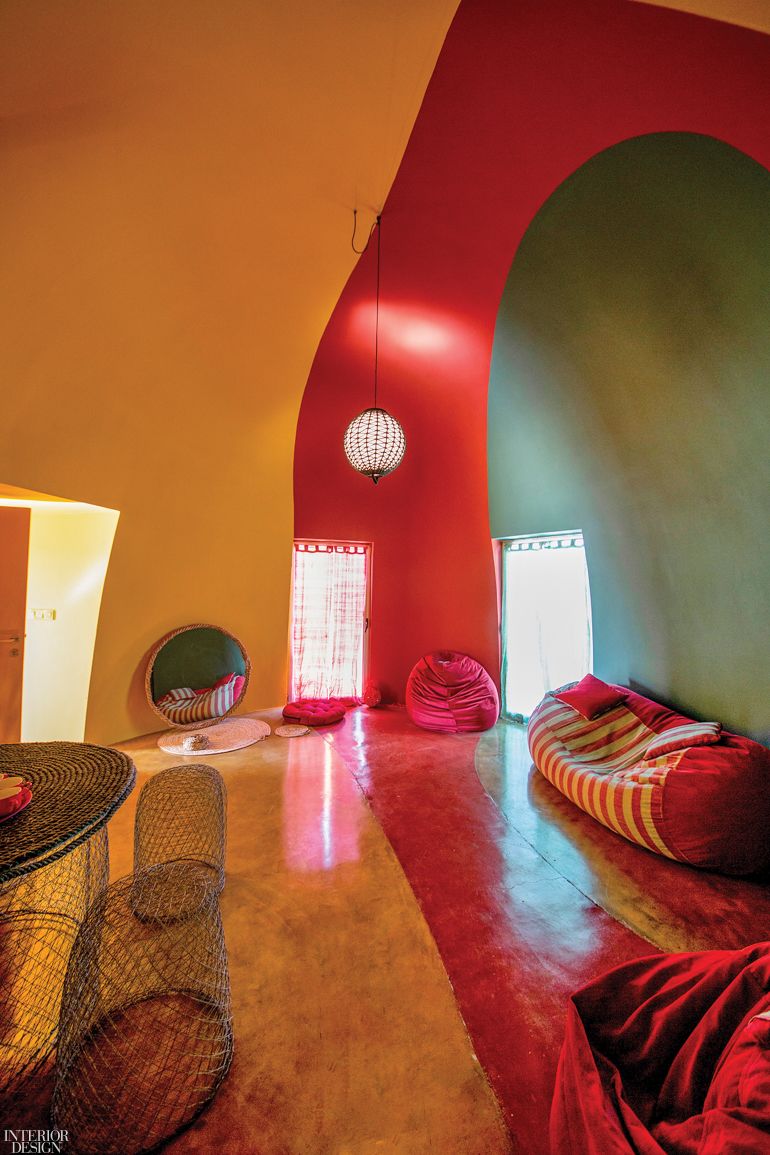 A 16-square-mile island with a population of 6,500, most of Hormuz is a natural reserve, its landscape known for colored sands and notable geological features. While most of the residents are dependent on income related to tourism, ironically, there is a lack of tourist accommodations on the island, which the Presence in Hormuz seeks to address. The complex, which encompasses 43,000 square feet on 21/2 acres, also includes the Rong Cultural Center, com­pleted in 2017, and the forthcoming Badban, a center for human-resource training and the management hub for the whole development. The recently completed Majara is the standout, featuring elements that evince a measured and context-specific approach. Majara is part of the Presence in Hormuz, a sustainably-built, three-part complex along the Strait of Hormuz. Photography by Soroush Majidi.

In conceiving the project, Zav sought to integrate the community as a stakeholder in the process. That materialized in the training of 50 local workers in Superadobe, a construction technology pioneered by Iranian-American architect Nader Khalili in the second half of the 20th century. An ingenious technique that earned Khalili a 2004 Aga Khan Award, Superadobe uses sandbags, barbed wire, on-site earth, and few tools to build structural arches, domes, vaults, or more standard rectilinear shapes. For Majara, Zav fine-tuned the Superadobe process to use less concrete and steel and replaced limited clay soil with region-abundant sand soil to mix with the plaster exteriors and interiors, allowing the creation of larger-radius and lower-height domes, 200 of them altogether, some topping freestanding structures, others interconnected. 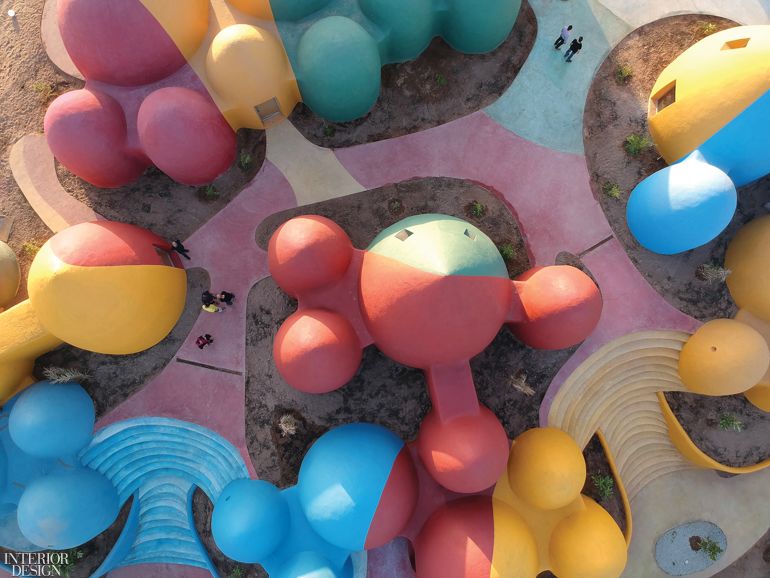 Colors derive from those found in the region’s soil, and structures are linked by meandering concrete walkways. Photography by Amir Tehrani and Mohammadreza Ghodousi.

The resulting ensemble combines several dome shapes and heights in a harmonious combination reminiscent of other locations in the country, from the desert city of Yazd to the badgir wind towers of Kashan. “Architecturally, we were looking at the domed water reservoirs in the region,” Zav founder and senior architect Mohammadreza Ghodousi begins, “a typology called berke in the local language.” Additionally, Majara employs colors in a surprising, effective way. The saffron yellows, sky blues, sage greens, and deep reds were inspired by the area’s rainbow topography. But instead of using the island’s endangered, naturally tinted soil to achieve the hues, Zav painted the structures, both inside and out. The sitting area in a suite bedroom is composed of furniture from Neshiman, a company based in Shiraz, Iran. Photography by Tahmineh Monzavi.

The outcome is a series of strong interiors that echo vernacular Iranian typologies, such as the winding, domed bazaars that are common throughout the country, dramatically illuminated by piercing oculi. Majara’s guest rooms and public areas, also by Zav, play with the exterior and interior hues by creating complementary and contrasting arrangements of monochromatic furnishings. The pieces are a mix of ones sourced in the region and custom designs executed by Hormuz craftspeople. “Some were based on the area’s shrimp-fishing nets, applying local craftsmanship like weaving,” Zav project architect Soroush Majidi notes, referring to a suite’s woven metal table and stools and pendant fixtures encased in black netting. “And our diffuse lighting system helps achieve a subtle atmosphere.” There are also simple glass orbs and round beds, which reinforce Majara’s curved geometry. 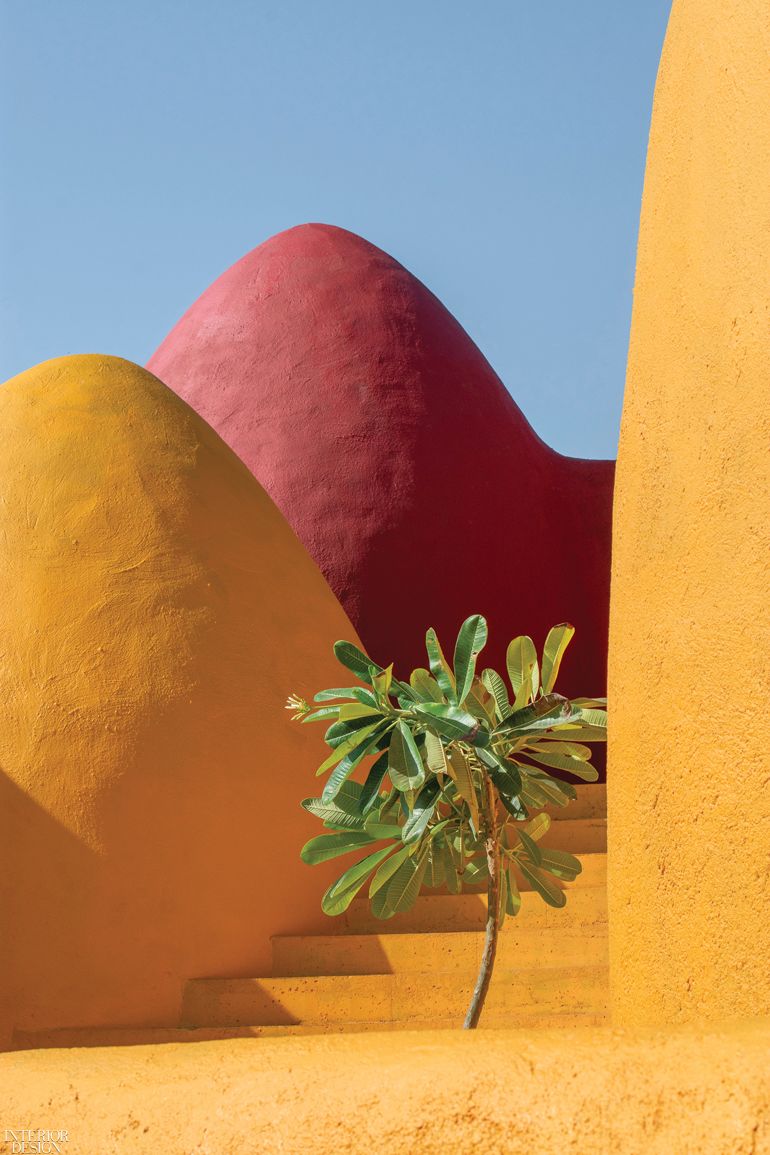 Among the landscape’s native species is Terminalia. Photography by Tahmineh Monzavi.

“Our goal for the project is to not only employ the local community but also boost GDP,” Ghodousi says of the guest residence, which opens its doors to the public later this year. When the entire Presence in Hormuz complex is complete, it will create dozens of new jobs for locals while still continuing to interact sustainably with the regionขmore than 20 percent of the landscape will harbor green areas planted with native species and the whole complex is ringed by water troughs for gazelles and area wildlife. It’s a sensitive and measured approach to the impact of mass tourism, revealing a glimpse of what the industry in a post-pandemic world could beขand pointing the way to the future of hospitality. 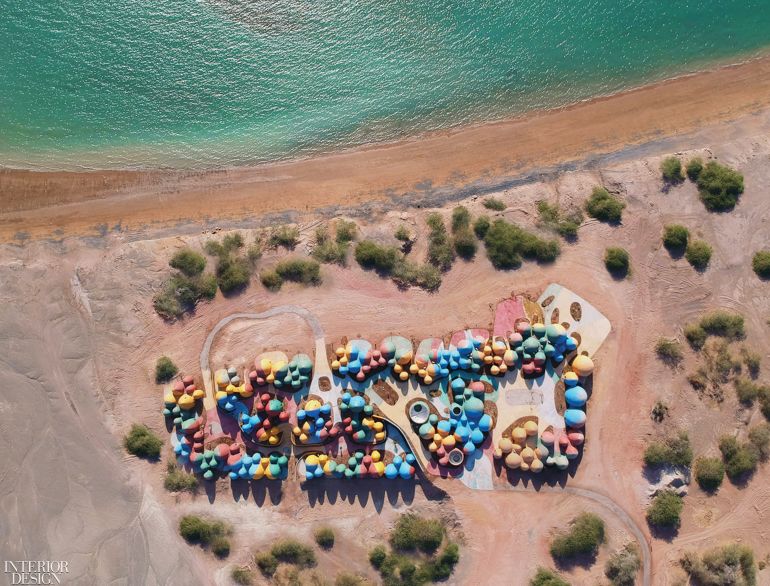 Appropriate distances are maintained to the shore and the island’s protected areas, and the entire 2 1/2-acre complex is dotted with water troughs for gazelles and other animal species. Photography by Amir Tehrani and Mohammadreza Ghodousi. 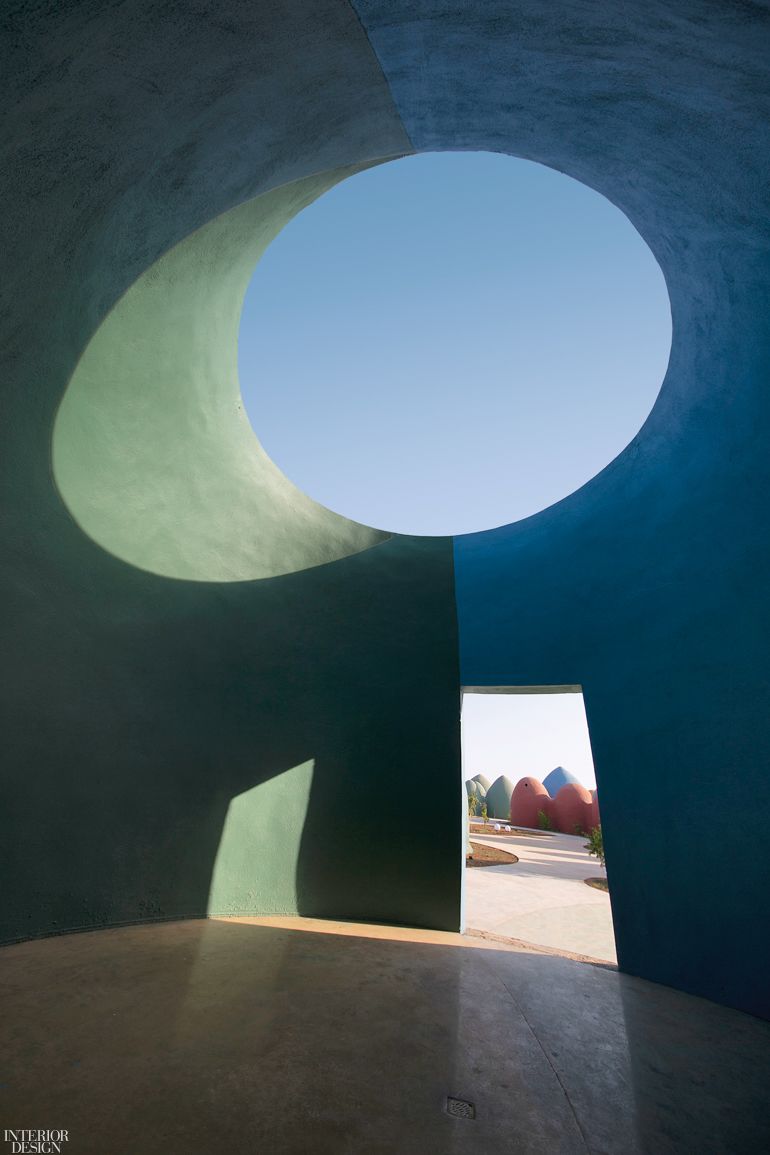 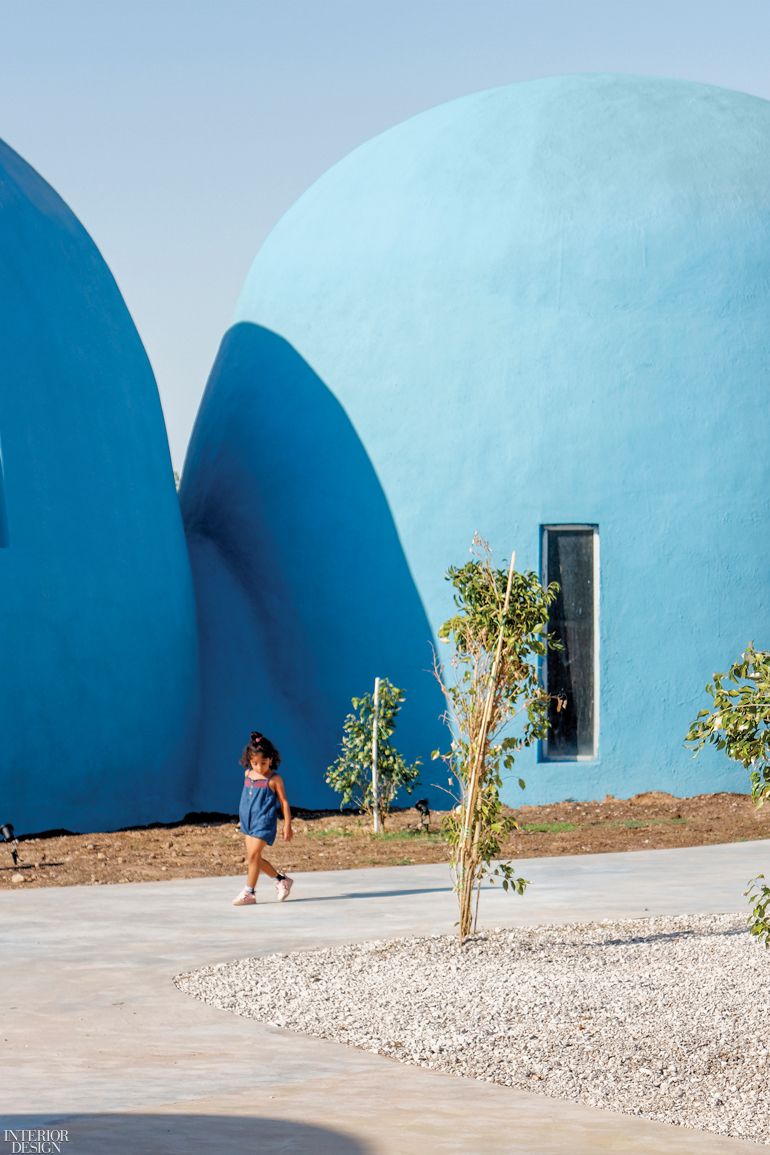 This is Ficus benjamina, also known as weeping fig. Photography by Payman Barkhordari. 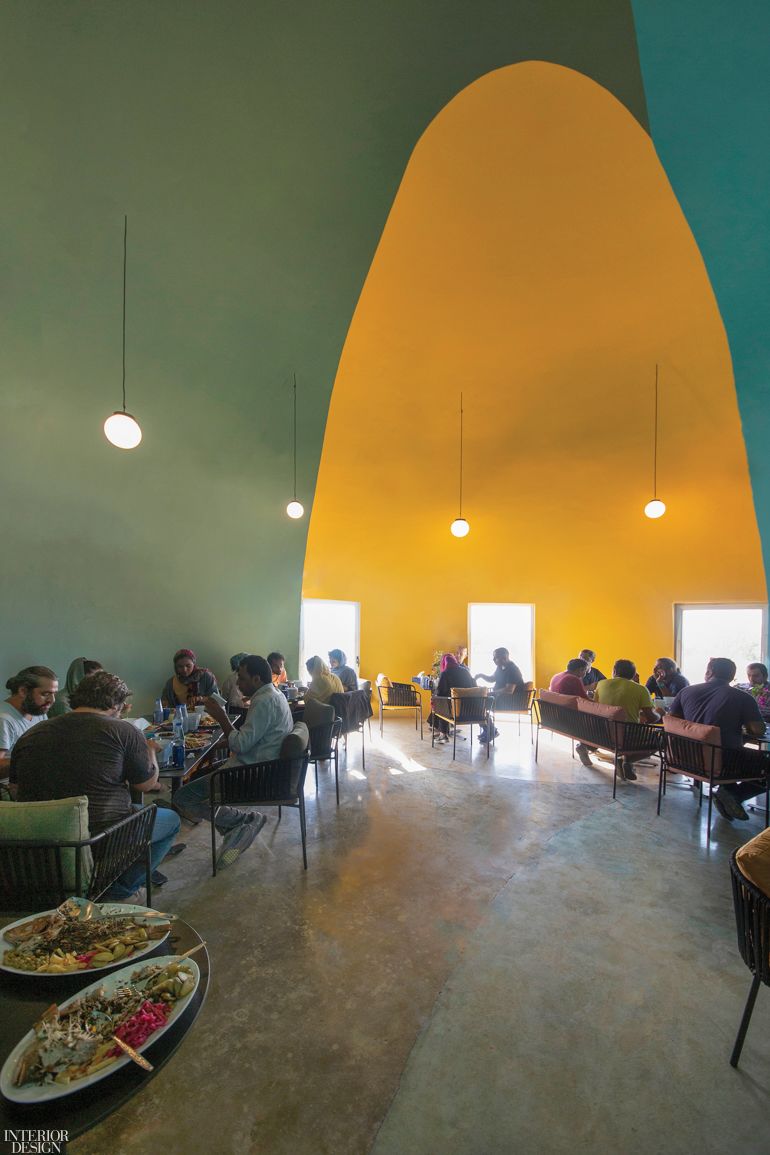 The guest residence includes a café. Photography by Tahmineh Monzavi. A suite’s entry is furnished with Puzzle sofas by Nazari, a Tehran manufacturer. Photography by Tahmineh Monzavi. 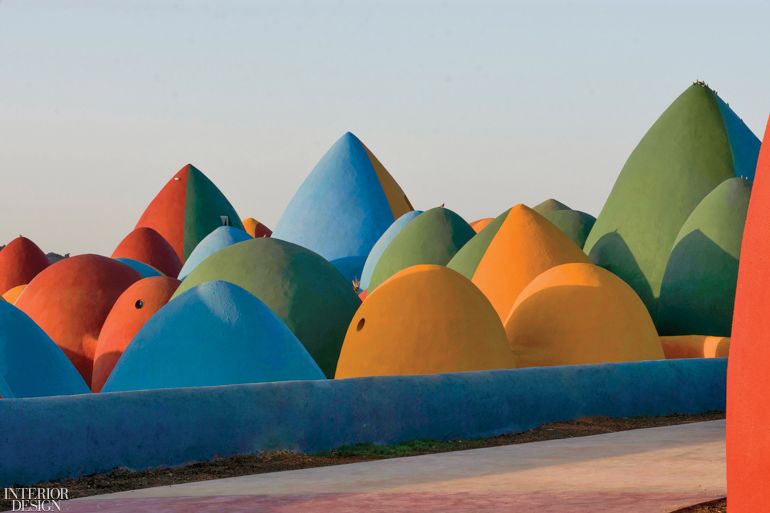 Majara features 200 pointed and rounded domes, many with larger radii and lower heights than typically built. Photography by Tahmineh Monzavi.