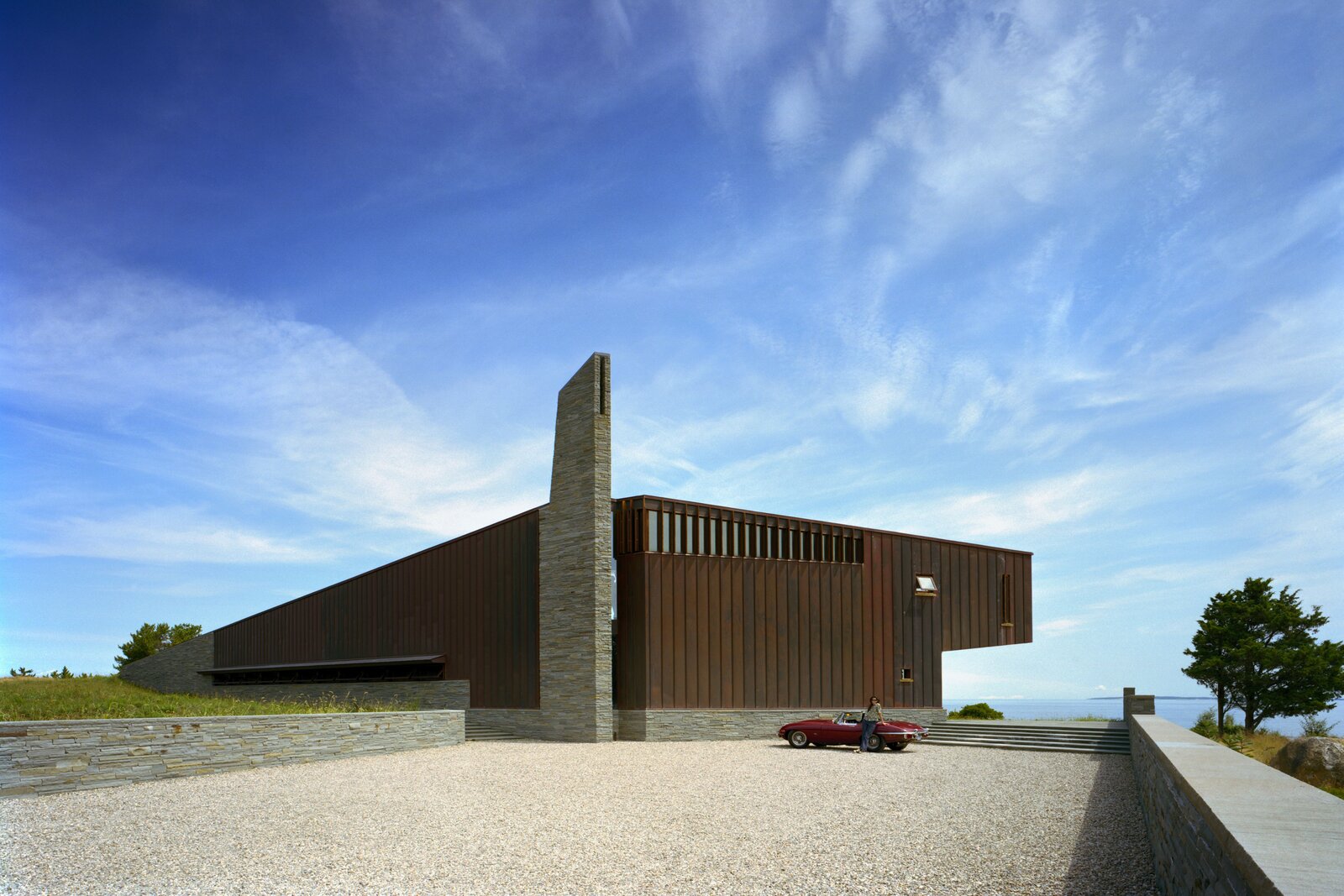 The home took 20 years to complete-and during its construction, Pedersen’s firm designed some of the world’s tallest buildings.

Skyscraper architect William "Bill" Pedersen is seeking a buyer for his longtime retreat on New York’s Shelter Island. His internationally renowned firm, Kohn Pedersen Fox (KPF), is behind some of the world’s tallest high-rises-from the 101-story Shanghai World Financial Center to portions of Hudson Yards in Manhattan. However his weekend home keeps a low profile-it slopes to meet the ground at one end, and it’s clad in natural materials to complement the coastal landscape. Architect William Pedersen’s home is located on the eastern side of Shelter Island, which is nestled between the north and south forks of Long Island in New York. The home’s exterior contrasts bluestone with copper. The entry court and the southwestern elevation is shown here.

"The house really blends into nature as much as possible," Pedersen told the New York Times last year, "and almost creates a sculptural form that becomes part of the land, and not just sits on the land but rises from the land, almost like an island emerges from the water." A staircase leads from the entryway to the upper level, where the living/dining area and kitchen are situated within a long space flanked by rows of windows. 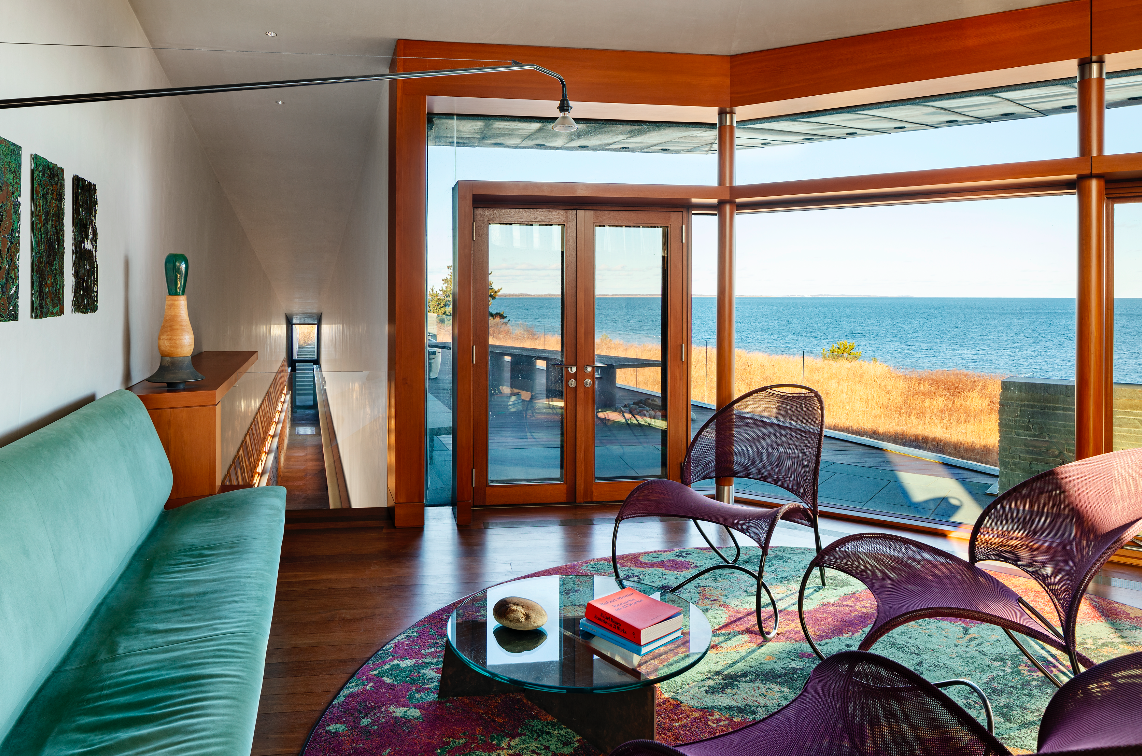 In the living area, French doors lead out to a rooftop deck. A glass balustrade in the corner overlooks a long hallway that runs along the lower-level bedroom wing.

Completed in 2005, the home reportedly took Pedersen nearly two decades to complete as he slowly mulled over options for placing the structure on the site, which he and his late wife, Elizabeth, purchased in the early 1980s. The final home was carefully designed to avoid obstructing the waterfront views of surrounding homes. 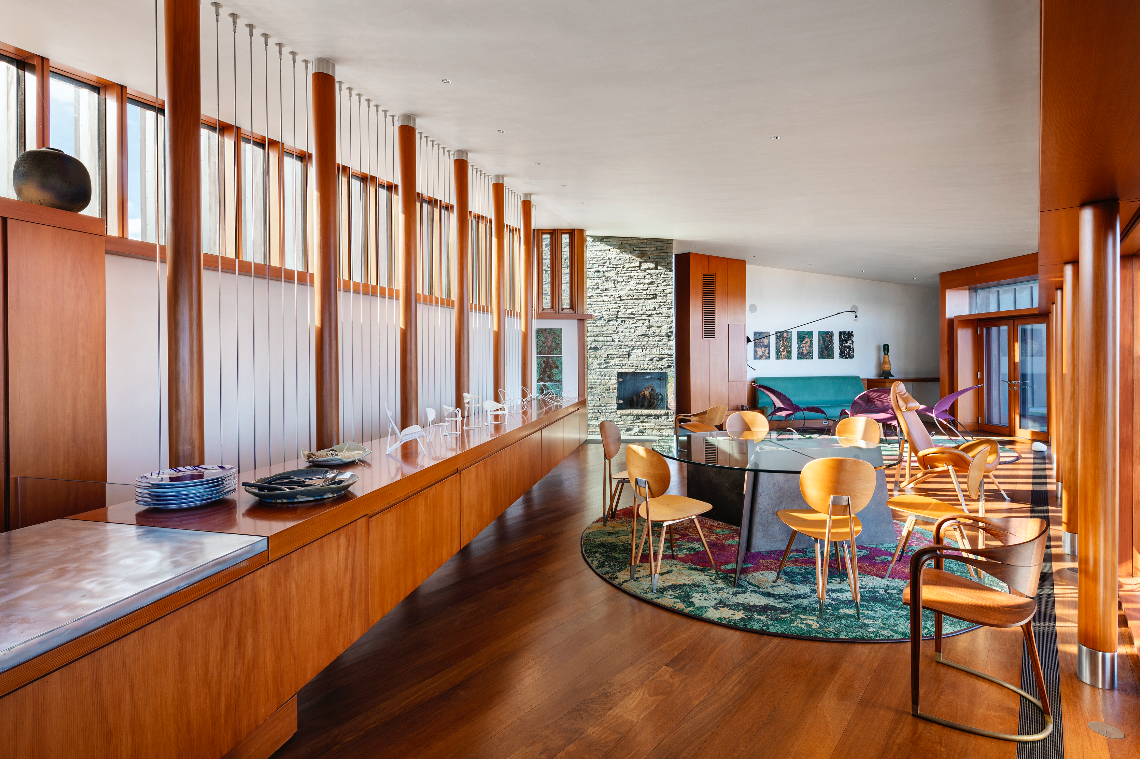 The interior is finished with bluestone and Douglas fir millwork and flooring. 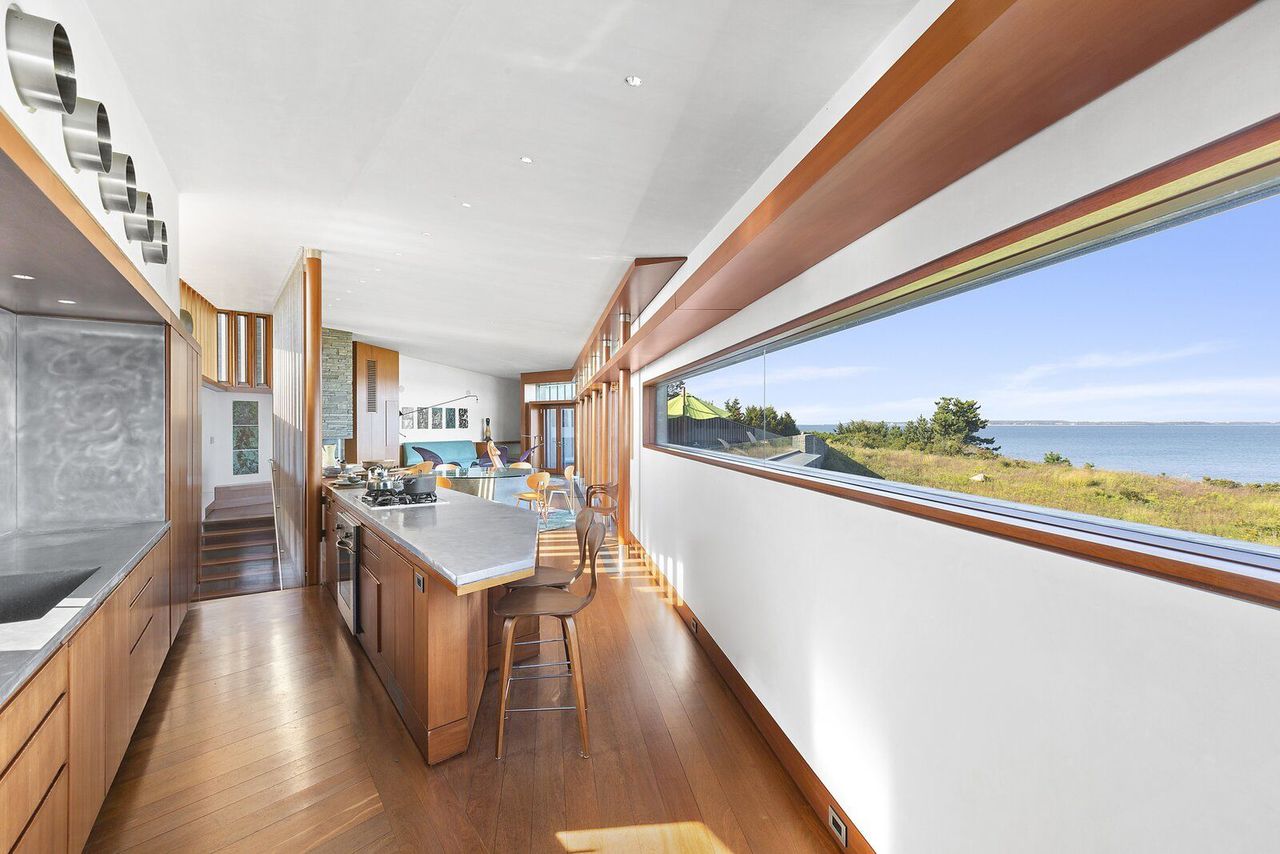 A central peninsula extends from built-in cabinetry in the dining area to the kitchen. A linear window frames the view along one side.

The residence measures nearly 4,700 square feet, and it offers three bedrooms and three full bathrooms, with the private areas situated on the lower level. The property also comes with 220 feet of water frontage along Gardiners Bay, as well as 2.92 acres of meadowland surrounding the home. The home originally listed for nearly $10M in 2020, however Pedersen recently dropped the price to $8,495,000. Keep scrolling to see more. 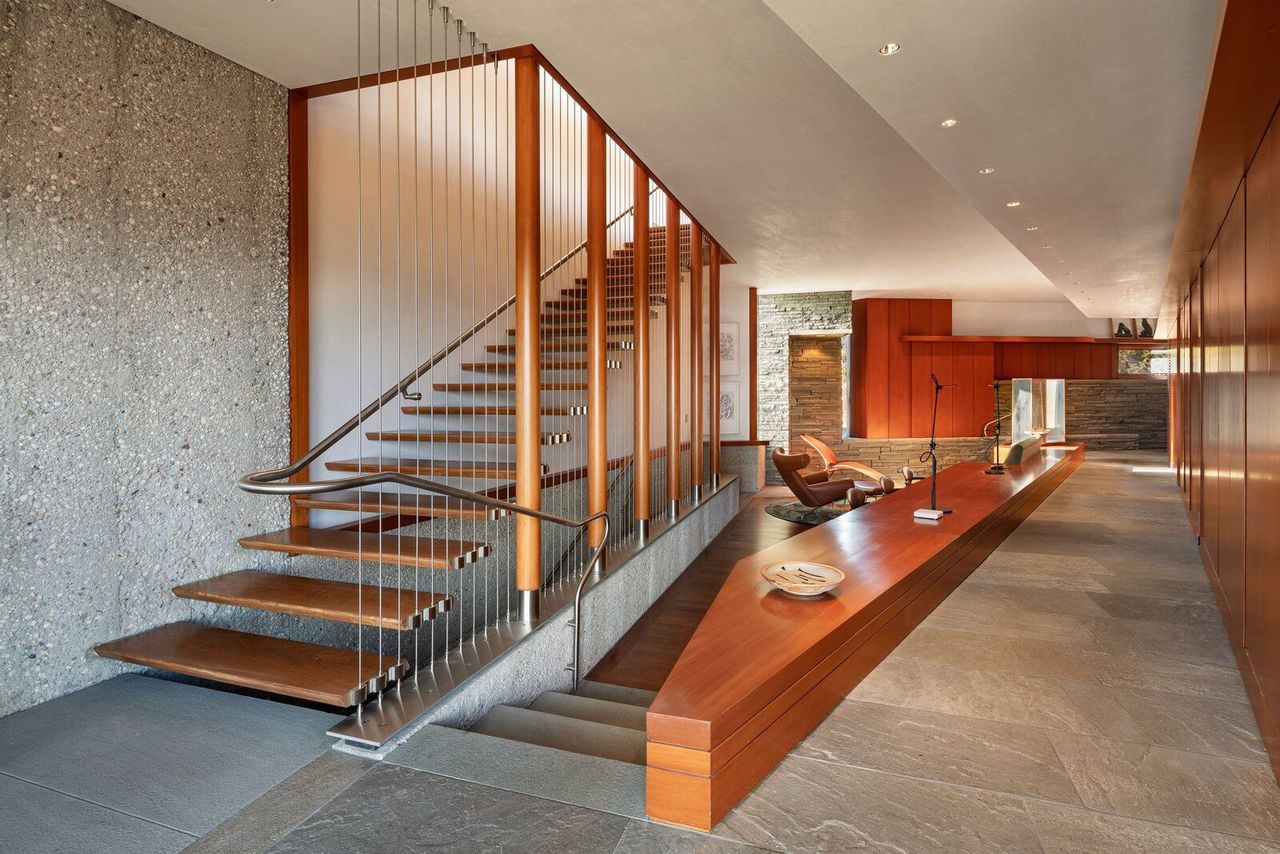 A staircase leads to the lower level, which opens with a built-in seating area before transitioning to the bedroom wing along the rear. A row of casement windows runs along one side of the bedroom wing. Sliding doors provide access to each room along the opposite side. 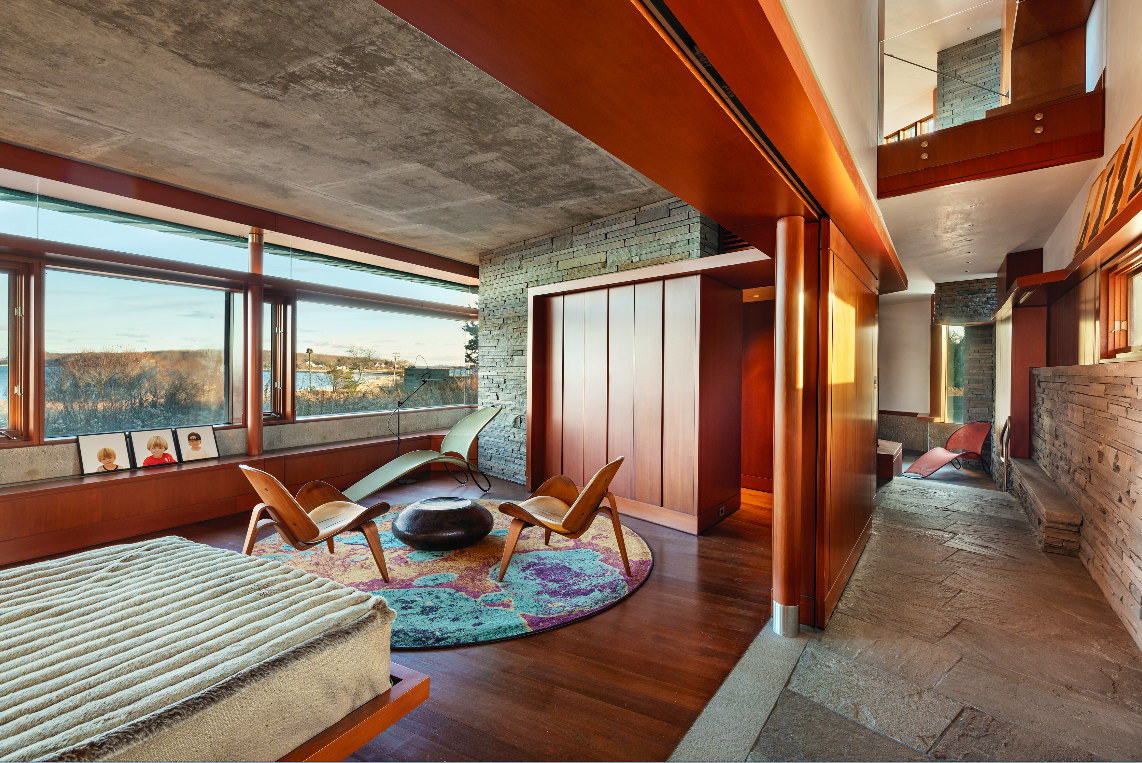 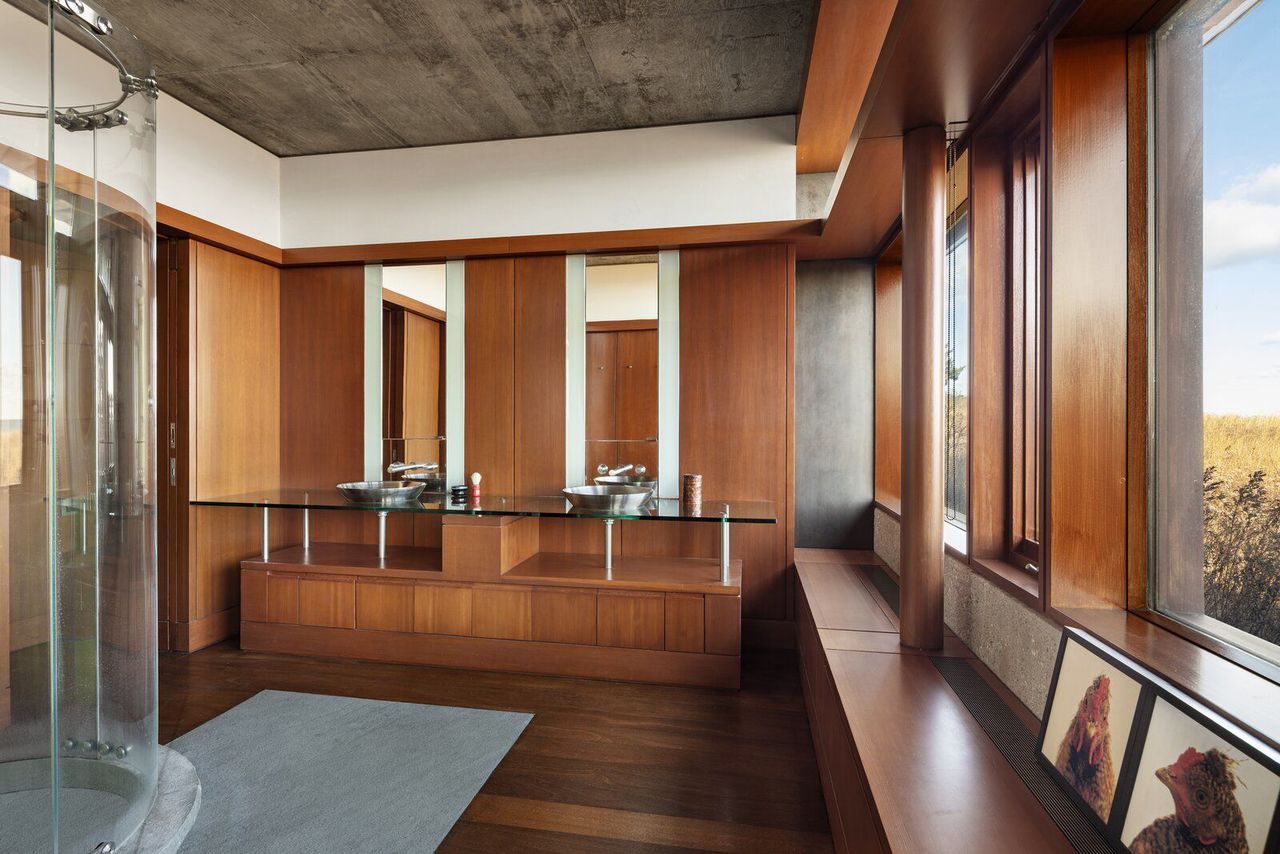 The principal bathroom features a glass-topped vanity with stainless steel vessel sinks and a circular shower in the corner. 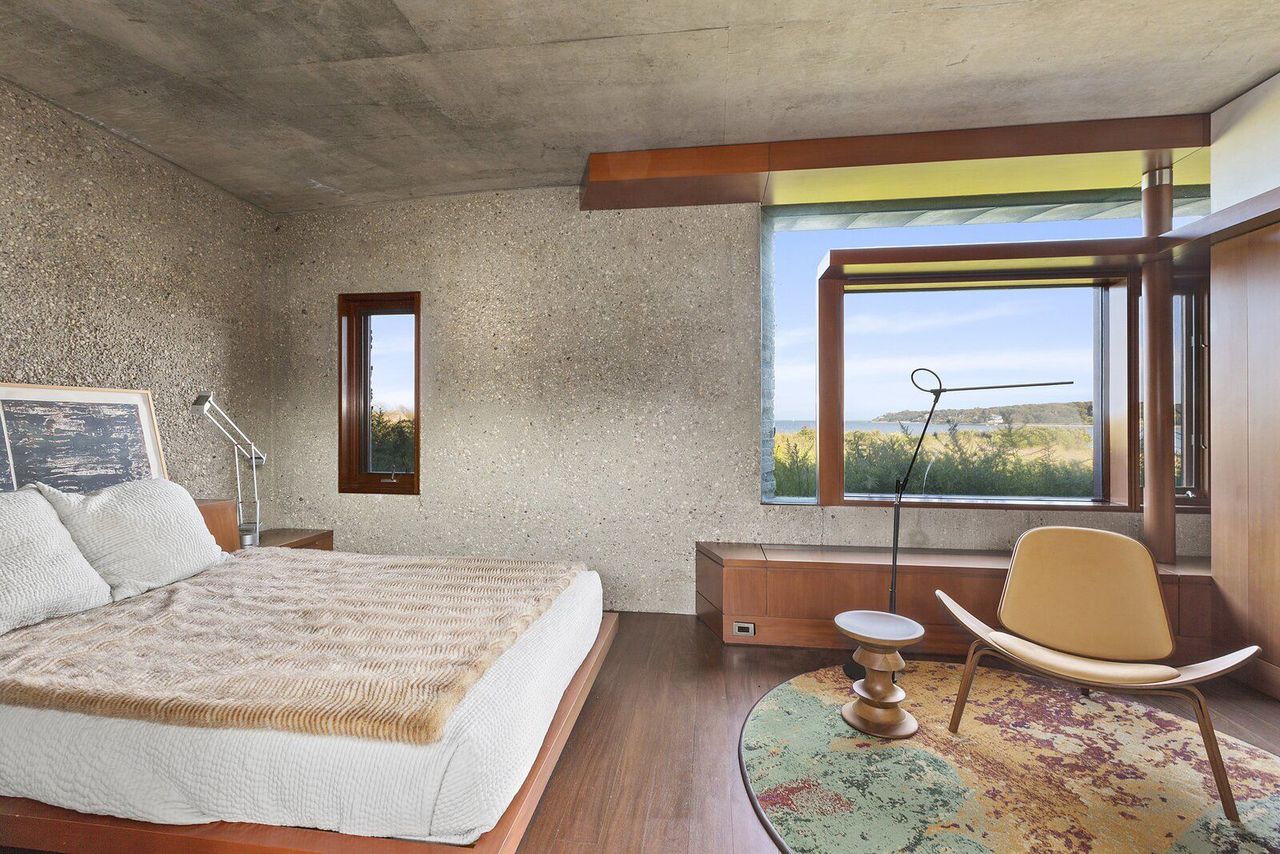 A look at one of the secondary bedrooms, which also feature concrete walls and ceilings. 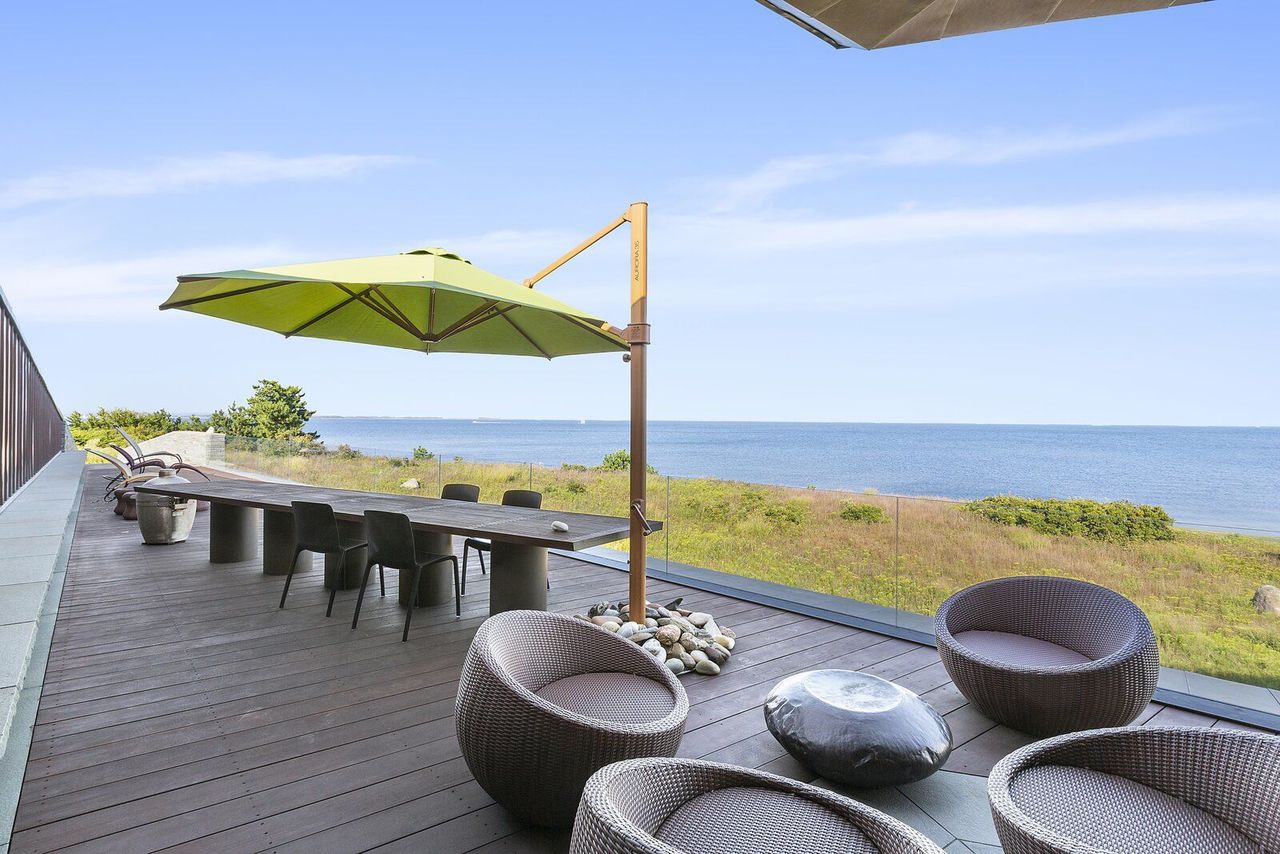 Accessible from both the lower and upper levels, the rooftop deck overlooks Gardiners Bay and the property’s 220 feet of private beach frontage. 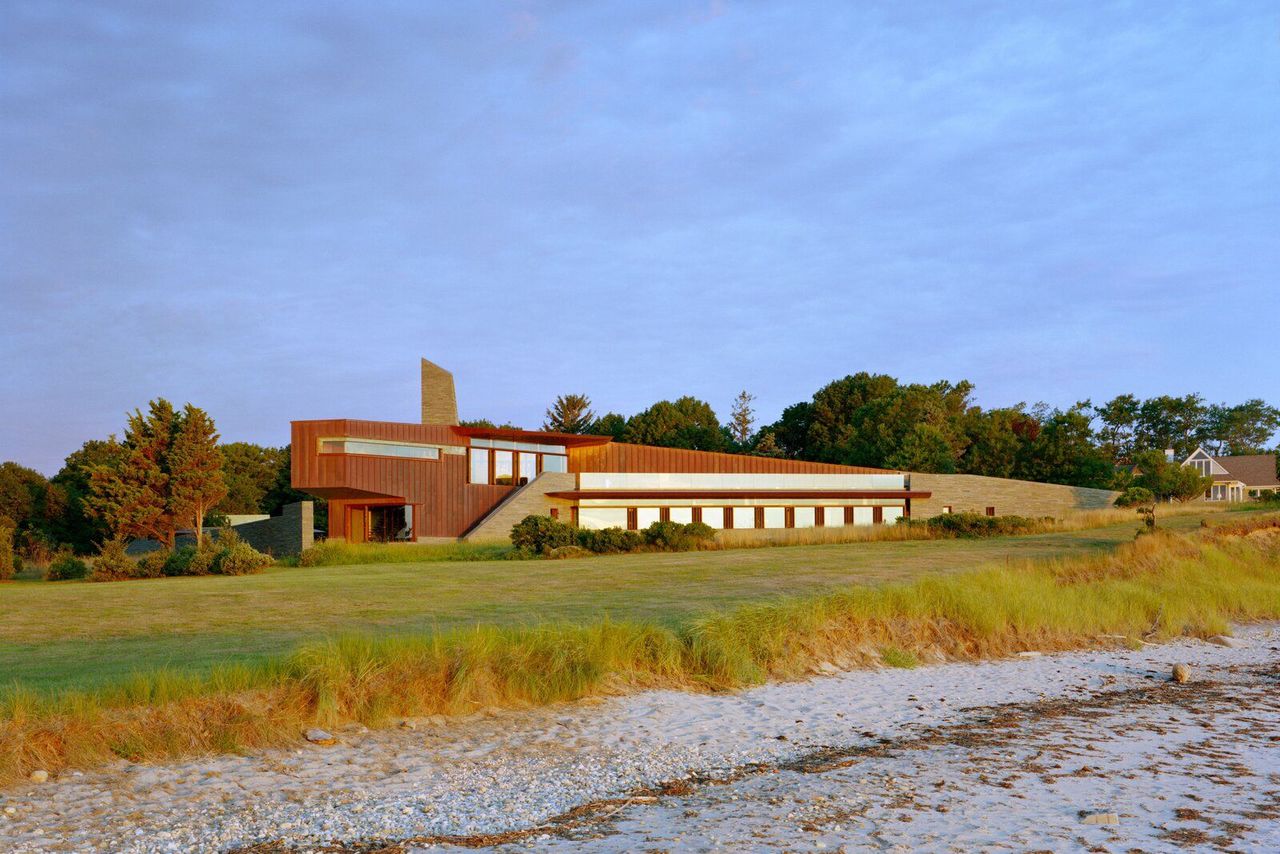 The low-slung home gently emerges from the surrounding landscape. The choice location on a narrow strip of land extending from Shelter Island provides panoramic views of three distinct local landmarks: the Long Beach Bar Lighthouse to the north, Gardiners Island to the east, and the entrance to Coecles Harbor to the south.