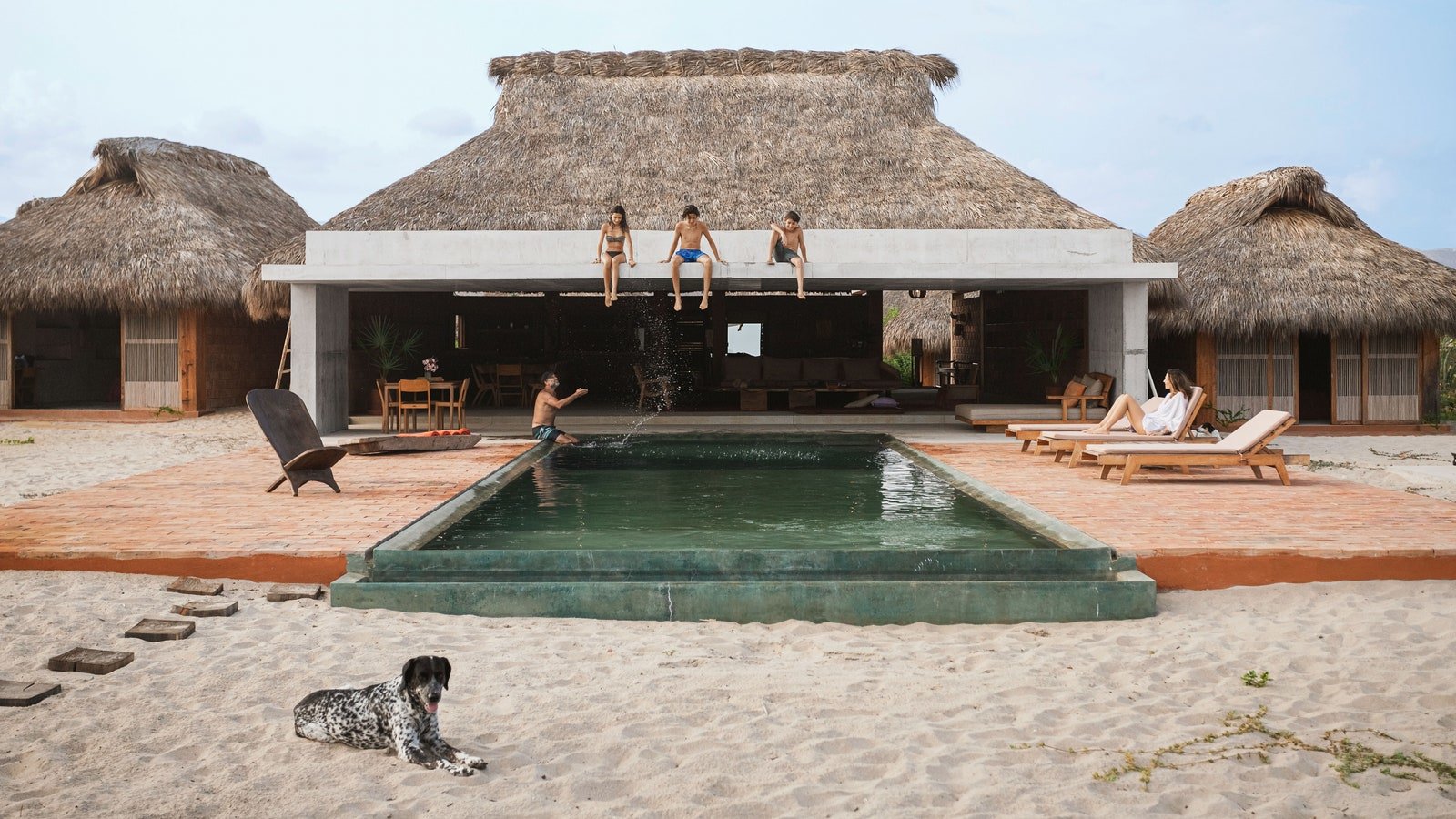 With the effects of time and the elements in mind, artist Bosco Sodi creates a private retreat for his own family on the coast of Mexico

Bosco Sodi understands the virtue of patience. For his best-known paintings, the artist slathers canvases laid flat with a heavy mixture of pigment, wood, glue, and natural fibers-engaging in an intensely physical and intuitive process, alone, for hours on end. Weeks or months then go by as that slurry dries into distinctive topographies, each work cracking at the whims of weather conditions, revealing unpredictable nuances of place. “Things become beautiful the more time passes,” says Sodi. “I want to work with the elements, not against them.” 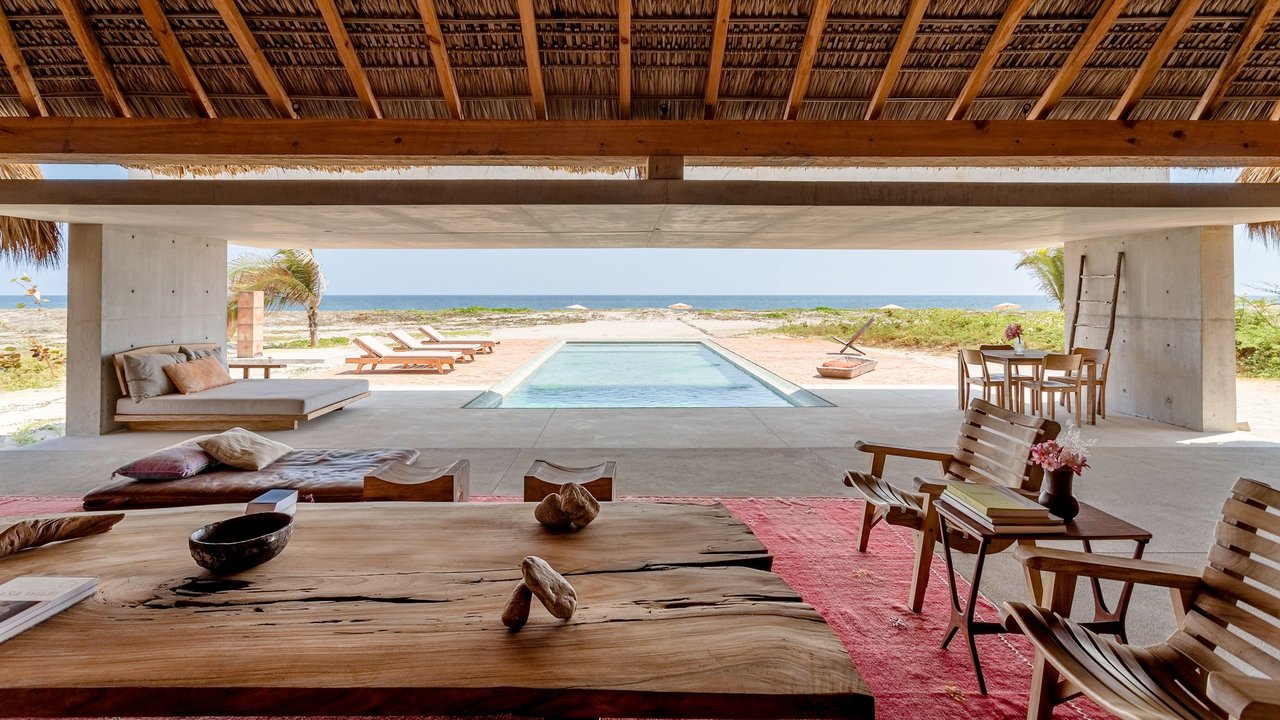 Artist Bosco Sodi and his wife, LucÍa Corredor, recently built a private home for their family on the grounds of Casa Wabi, his artist residency, foundation, and exhibition space in Puerto Escondido, Mexico. The house was built according to Sodi’s design and decorated by Decada, Corredor’s Mexico City design studio. Alex Krotkov That was the idea behind his family’s new house in Puerto Escondido, a surfing hot spot on the Pacific coast of Mexico. Completed last year according to Sodi’s own designs, the beachfront home combines concrete, clay, and timber into a series of open-air palapas, the surfaces of which will weather with each salty breeze. Traditional Oaxacan thatched roofs offer shade from the harsh tropical sun, floor-to-ceiling openings frame ocean views, and walls of stucco and brick reveal the mark of local artisans. There’s no air-conditioning-just ceiling fans-and only spotty internet. Outside, a pool extends dramatically toward the waves, reflecting every sunset, every day gone by. 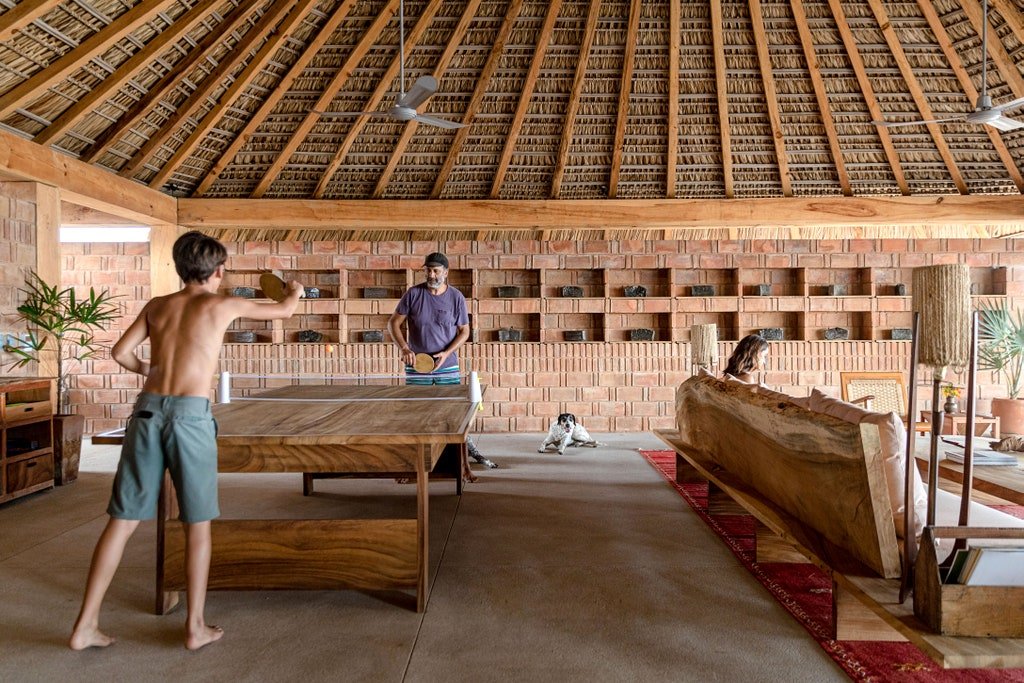 “I am not an architect, but I wanted to experiment with the materials,” says Sodi, who, if not exactly an expert, certainly knows a thing or two about construction. Since 2013, he has transformed this scenic swath of sand into the artist residency and nonprofit foundation Casa Wabi, collaborating with some of the world’s leading architects to realize its campus, now a pilgrimage site among design lovers. Tadao Ando conceived the main structure, with his signature cast-concrete walls. Álvaro Siza, another Pritzker Prize winner, devised the ceramics studio, distinguished by a curved brick partition. It’s accompanied by a towering kiln by Alberto Kalach. And Kengo Kuma created a sculptural chicken coop of interlocking wood boards. Sodi took inspiration from each, assembling their precedents into a mixed-media homage. 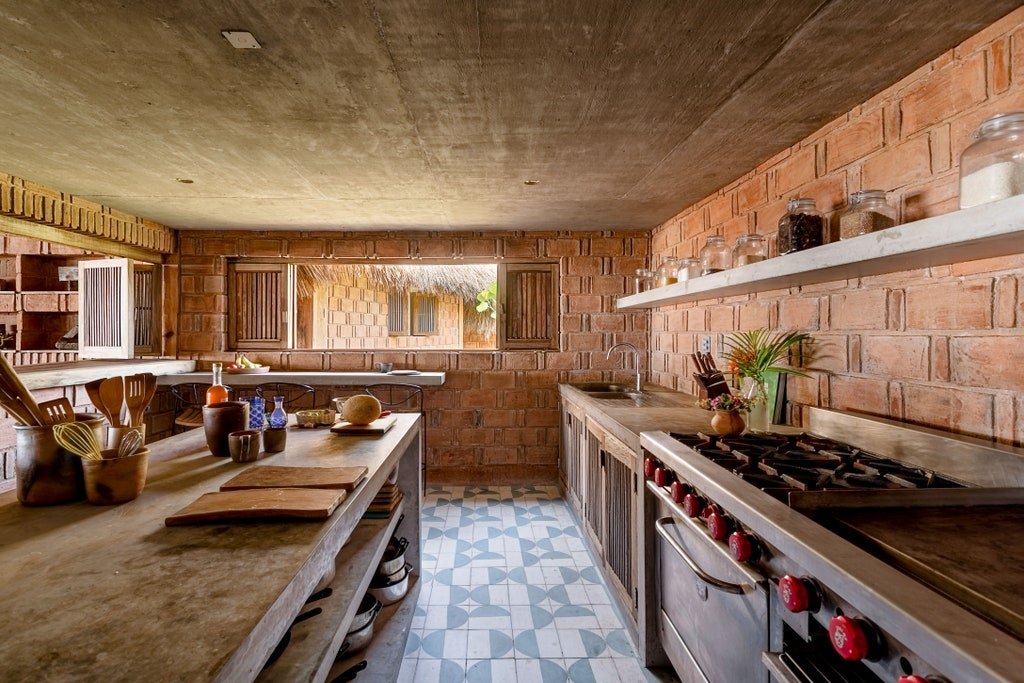 This coastal stretch has, in many ways, been Sodi’s home away from home for decades. He first began camping along the coast as a teenager, later introducing the area to his wife, Lucía Corredor, cofounder of the Mexico City design shop and atelier Decada. After building two other houses with his father in Puerto Escondido, Sodi eventually bought Casa Wabi’s ocean-facing plot. “We fell in love with the energy of the place,” he says, adding that he and Corredor were always eager for their three children-Bosco, Mariana, and Alvaro-to experience that magic. “Because we live in New York, I wanted our kids to see their Mexican roots, to understand their culture.” 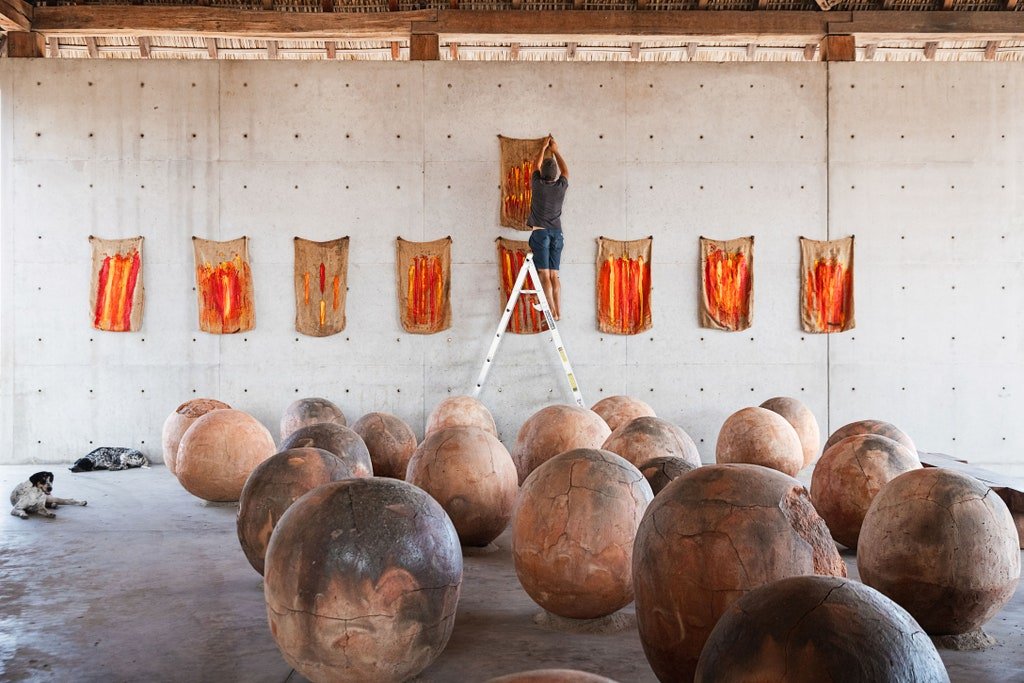 While the original living quarters at Casa Wabi afforded the family a place to crash in between artist residencies, their new house allows them to stay as long as they wish. Such was the case this past year. After arriving in Puerto Escondido in early March to ride out the New York City lockdown by the ocean, they ended up sheltering in place well into May—finding relief along the beach and in the pool, the deep end of which invites pencil dives off the roof. Inside the main palapa, a timber Ping-Pong table gave parents and kids a chance to blow off some steam. That piece, like all the furniture in the home, was chosen by Corredor with an eye for rustic materials and hand craftsmanship. “We thought we would only stay for a couple weeks, but it ended up being the perfect place for us and the kids,” she says, reminiscing about sunset walks on the beach, movie nights outside with a projector and a sheet, and alfresco dinners with local friends. A live-edge cocktail table mingles with other decada pieces, both vintage and contemporary, in the great room of the main palapa; the sofa is upholstered in Sunbrella fabric to withstand the elements. Alex Krotkov 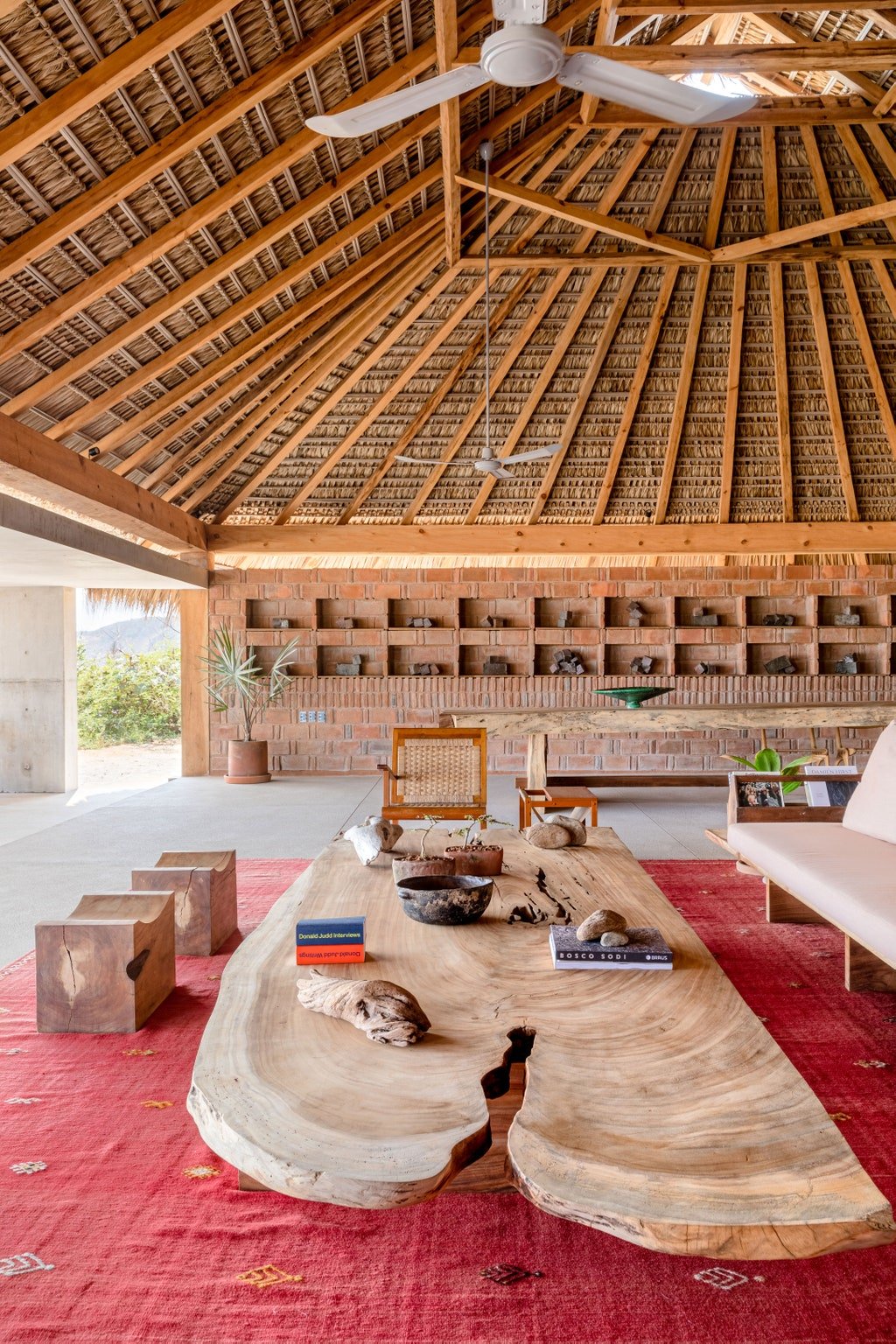 “For me, Casa Wabi is my therapy,” says Sodi. “It’s a very different, very special rhythm.” That disconnection has proved to be potent creative fuel for the artist, working out of a separate studio on the grounds. Unable to get stretched canvases during the pandemic, he began painting on the readily available woven sacks used by local vendors to store dried chilies, each bag enlivened by frayed edges and stains. “We have to adapt,” says Sodi, who also dedicated himself to a series of spherical sculptures, molded from local clay, which he let dry one month in the sun and another month or more in the shade before firing them in the kiln. An array of these works is now on view at the Brooklyn arts space Pioneer Works, a complement to his recent solo show at Paul Kasmin Gallery, which debuted a series of all-white paintings imprinted with the forms of tree branches. And Sodi further used his time in quarantine to compile 20 years’ worth of writing into a new book, En Cuarentena, published this past summer. 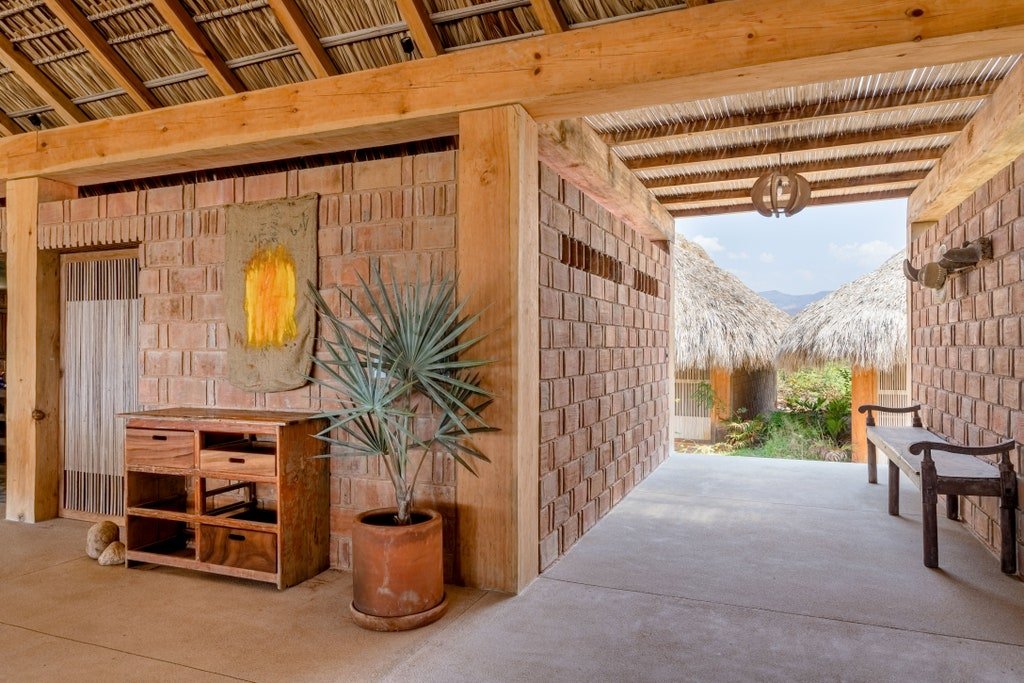 Creativity is quite literally baked into the new house. To realize its brick walls, Sodi turned to the same Oaxacan artisans who had created the clay timbers for Muro, his 2017 installation in Manhattan’s Washington Square Park. That artwork, more than six feet high and 26 feet long, invited viewers to remove a single timber from the structure and take it home with them, dismantling a barrier at a time when one was being proposed along the United States–Mexico border. Bringing people together, fostering community-all that, too, is at the heart of Sodi’s extraordinary new home. “It’s a place to invite friends, to invite family, to connect with nature,” he says, noting that when there’s heavy rain, water may pool inside the rooms. “It is important not to be easy.” 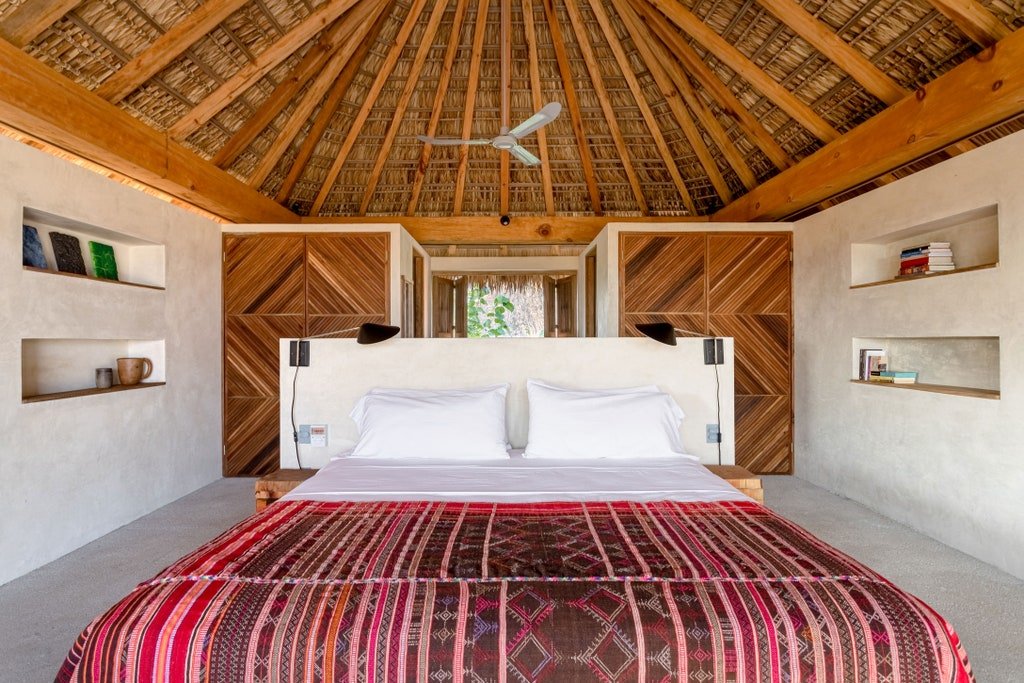