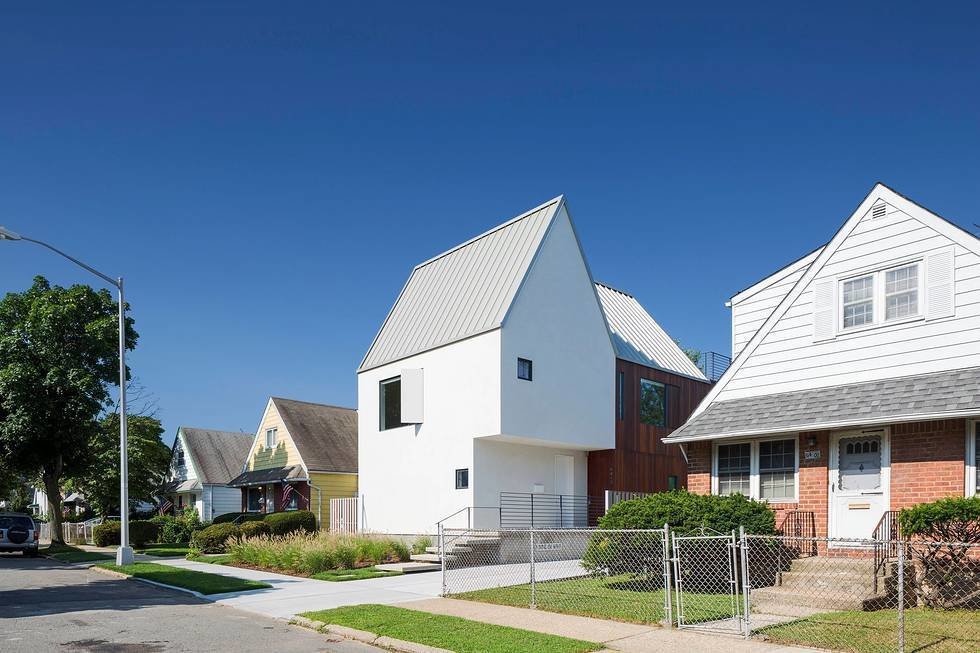 O’Neill Rose Architects designed each unit of this modern Queens compound based on the personality of the family member occupying it.

Before O’Neill Rose Architects took on this project, the client-a contractor the firm often works with-was living with his mother, brother and sister-in-law in an older, smaller house previously owned by his father-in-law. It was a less than ideal situation for the busy family. "He wanted to make a space that would work for the whole extended family but have each piece have its own identity and presence on the property, so they could feel like it was theirs as it was still tied in with something else," partner Devin O’Neill says. Different exterior finishes demarcate each section of the building; the client’s home is identified by rich ipe wood with windows that fan outwards to allow fresh breezes inside. The other two parts are clad in stucco, a challenging material to work with, O’Neill says, because they had to scaffold and apply it in a single day to create a seamless look.

Tasked with creating a brand new structure that would house three separate groups of people with very different personalities, the firm devised an unconventional scheme that would be composed of three unique units joined together beneath one roof, with areas of overlap and connection. Each unit has a slightly different visual scheme, to "generate the character of who was living in the space." 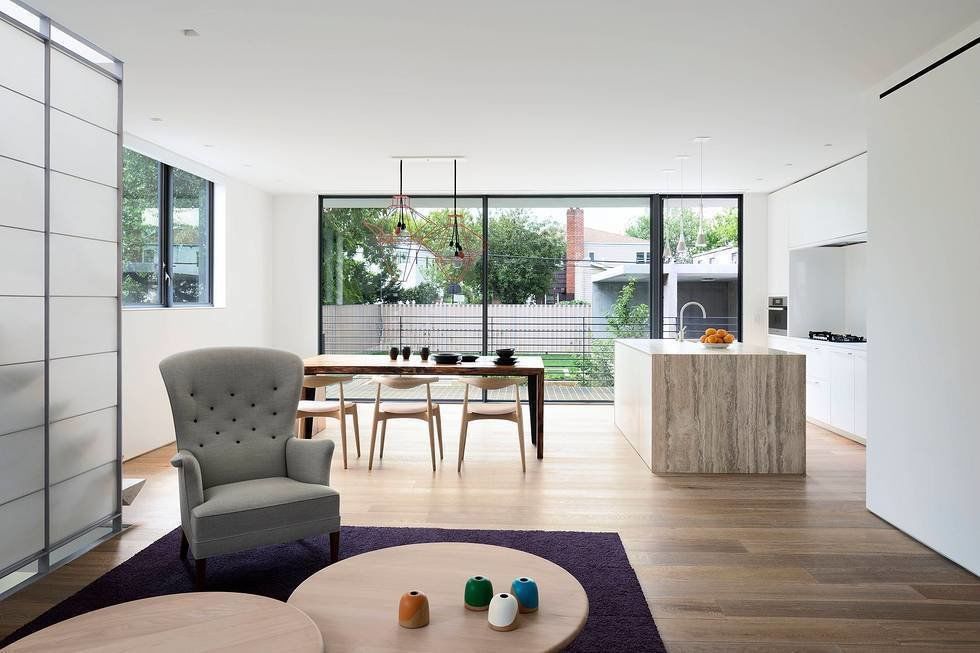 The client’s house, located in the center of the building, caters to the couple and their two children. The clean, understated kitchen features a hulking travertine island and views of the garden below. 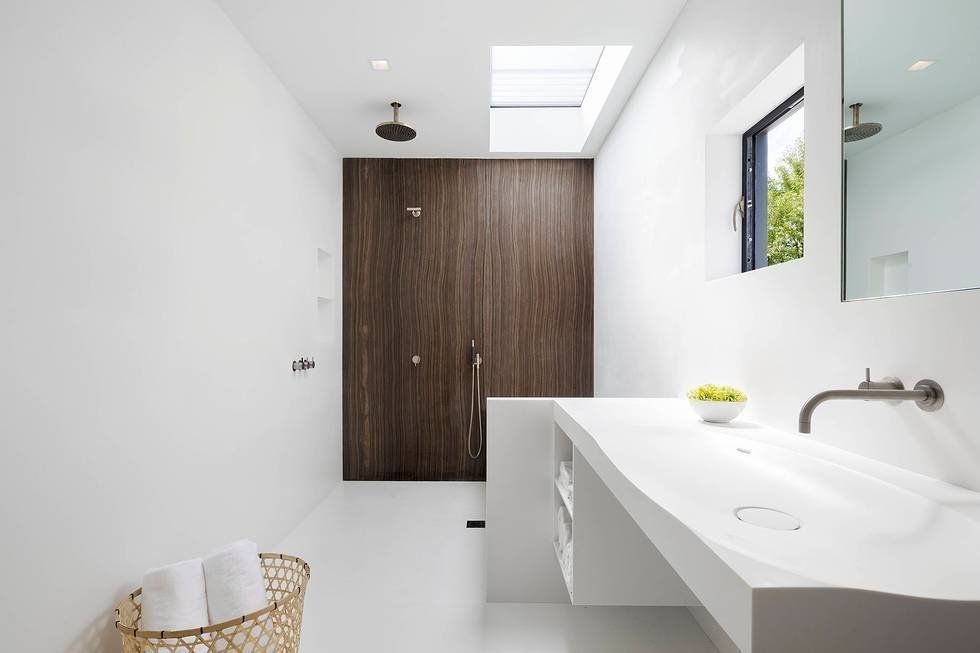 The master bathroom in the client’s unit features Corian for the flooring and sink, a material O’Neill favors for its “beautiful plaster quality, where the light almost sits in the material and glows," adding, "we wanted the bathroom to be like a light box where the material is holding this light in a big room.” The back wall of the shower is a single slab of travertine stone, adding elegant contrast to the room. 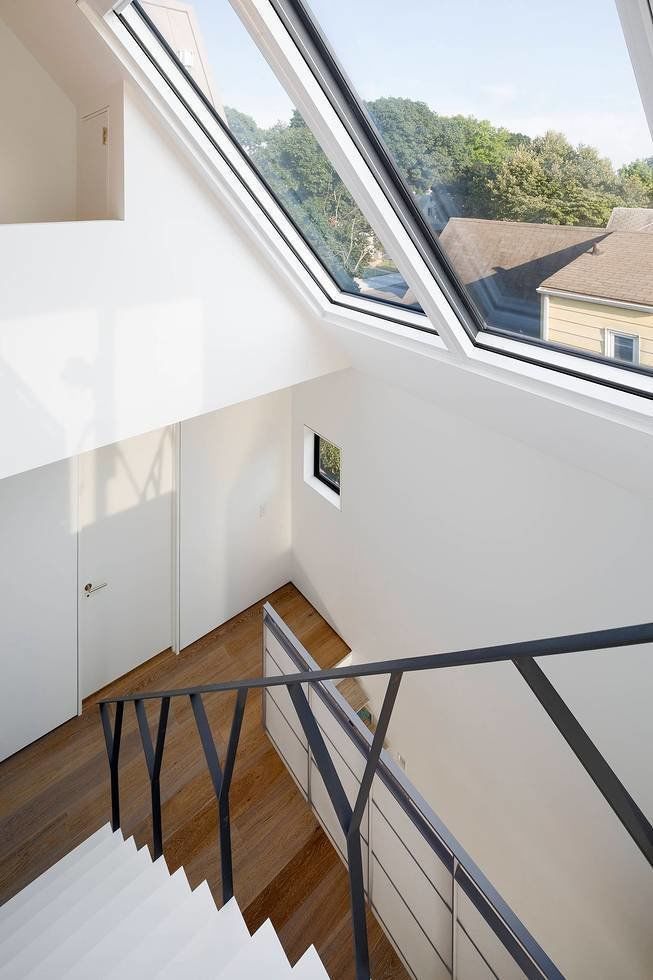 A thin Y-shaped metal banister guides movement up the stairs to the client’s son’s room. Below the Corian stairs, an office nook was carved out of the wall in the daughter’s room. 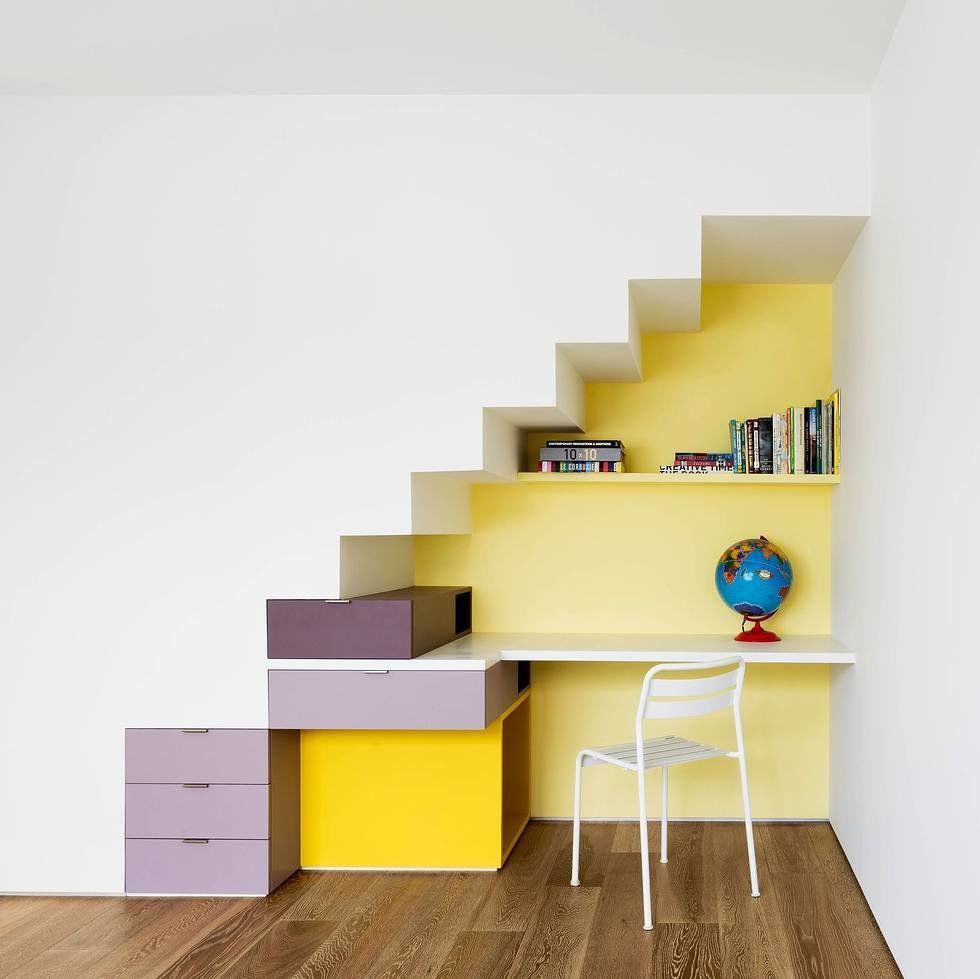 Bright yellow and purple paints were used to add some vibrancy to the daughter’s desk area, one of the ways the architects tried to honor the personality of each inhabitant's space. 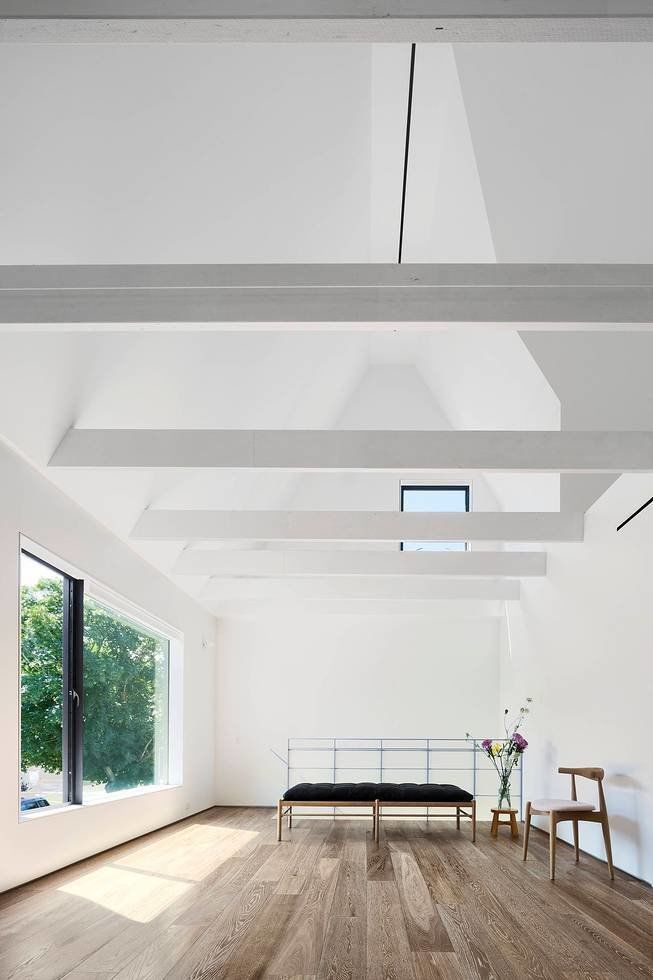 In the client’s brother’s section of the building, a monochrome palette was employed to keep the space feeling as large and open as possible. The living room is located in the front section of the house that cantilevers out towards the street. O'Neill Rose Architects designed each unit of this modern Queens compound based on the personality of the family member occupying it. The kitchen in the brother’s unit is bright and fun with a backsplash made of painted glass. The light fixtures, like many other materials found in the project, were left over from the client’s contracting work; O’Neill Rose bent the found pipes into an array of angles and attached light bulbs. 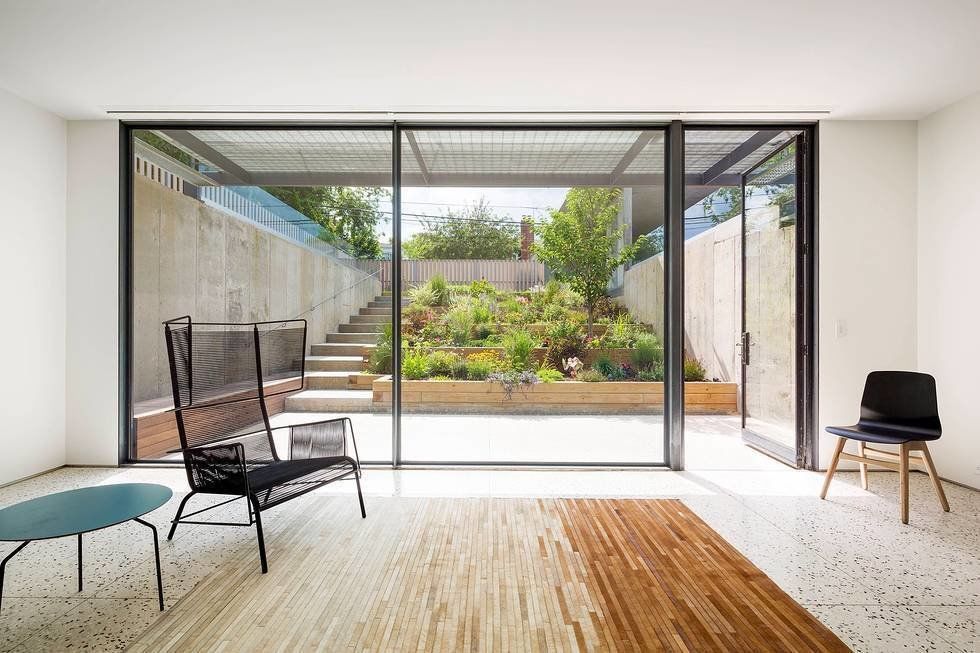 The mother takes up residence in the basement area, which enjoys access to the backyard garden where the children often play. Terrazzo flooring with a cowhide rug create a slightly retro-glam look. 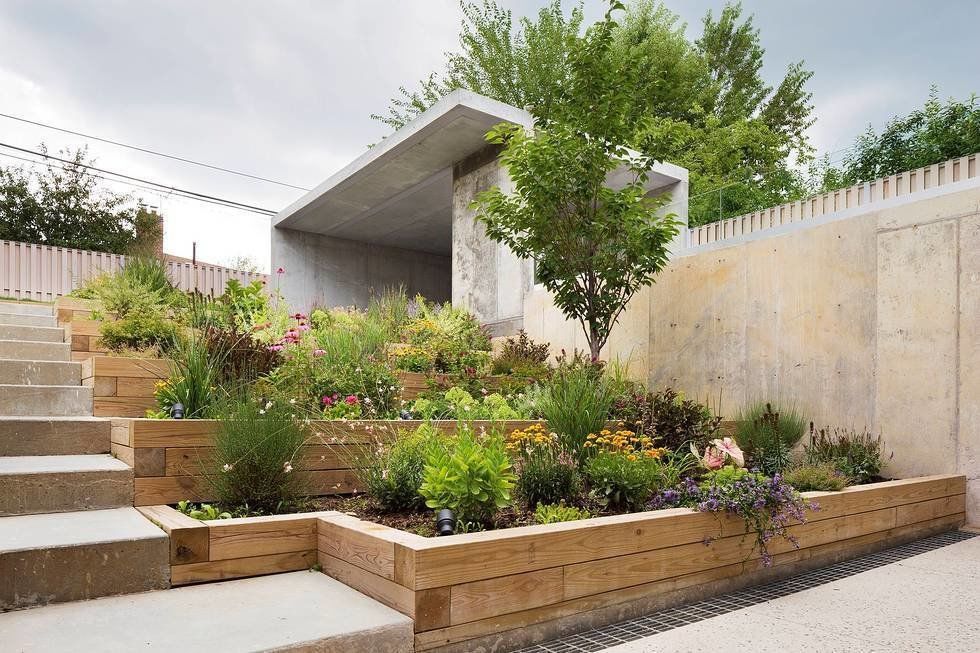 The backside of the lot was dug out to create a recessed garden for privacy. The mother is an active cook, so including planter boxes for herbs and hot peppers was a must. 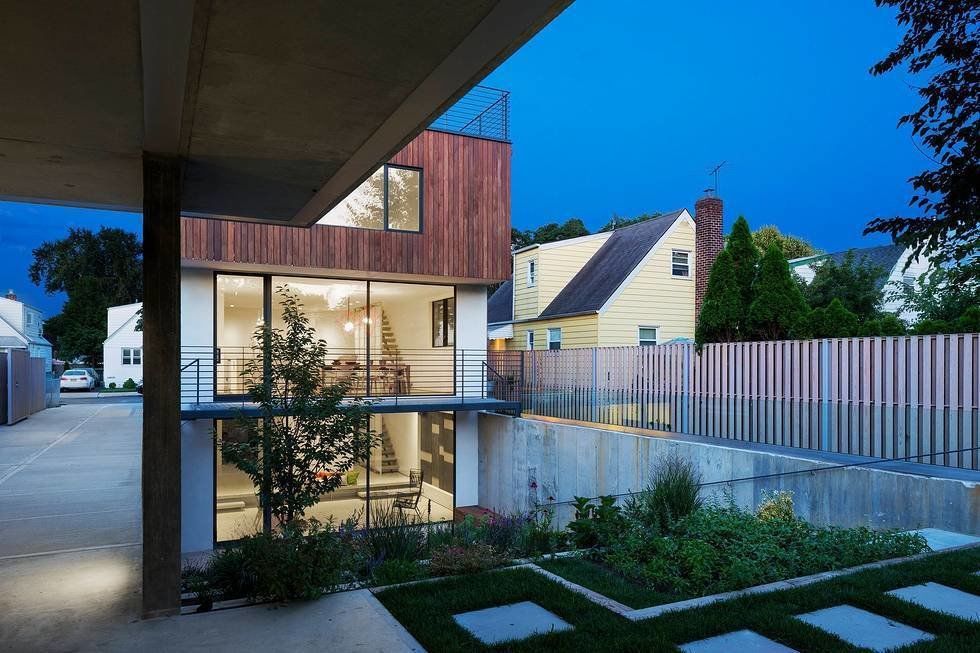 The client's mother enjoys sitting in the concrete pavilion, where she can watch the activities of the house with a prime view.