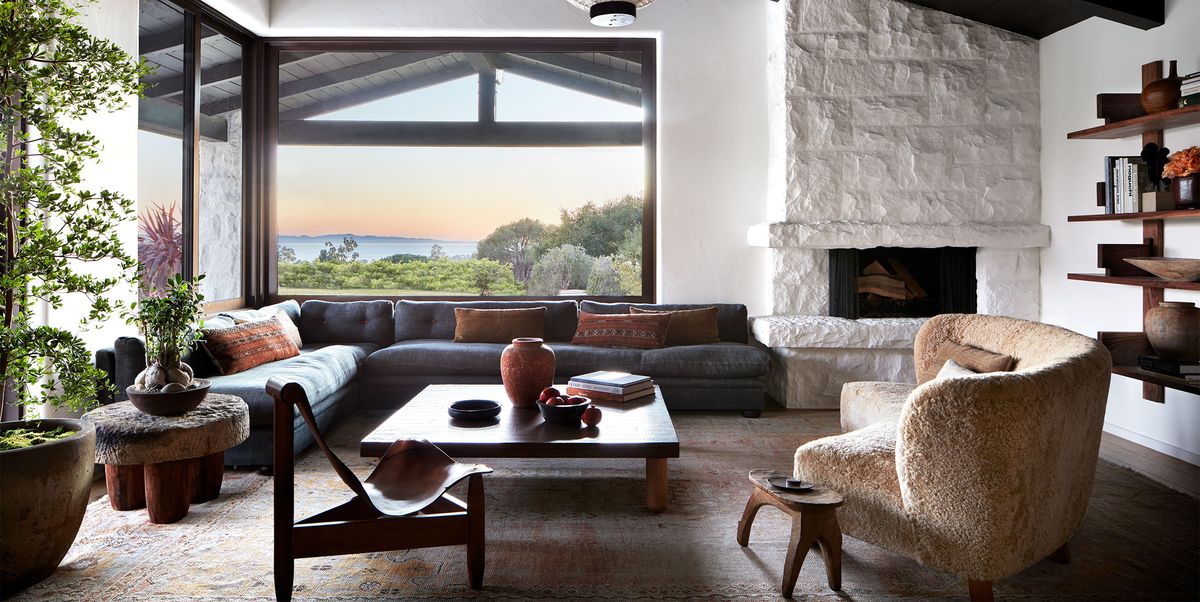 This Southern California Sanctuary Will Envelop You Like a Warm Embrace

Leave it to Studio Shamshiri to make time stand still.

During the 20th century, when parts of the United States had already been standing for hundreds of years, the look and feel of Southern California architecture was only beginning to take shape. Operating at a healthy distance from the established traditions of the East Coast and Europe, designers here were left with ample room to experiment; they liberally borrowed from the conventions of the Old World, remixing and repurposing them for new modes of indoor-outdoor living. 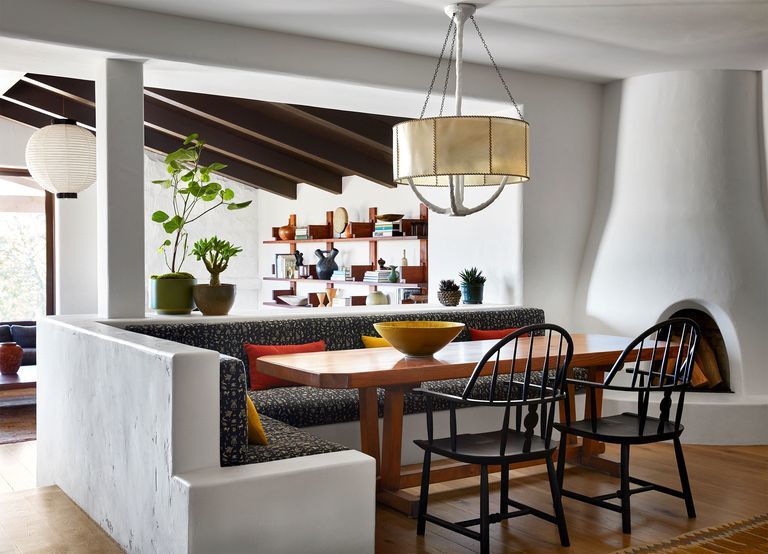 The breakfast nook banquette is upholstered in a cotton print by BDDW, the French table is from Morentz, the chairs are by Sawkille Co., and the chandelier is by Trans-Luxe.

In some ways, this forward-​thinking approach to the past describes the work of Studio Shamshiri, the Los Angeles–based ELLE DECOR A-List design firm cofounded by brother and sister Ramin and Pamela Shamshiri in 2016. A pair of history buffs with familial roots in Tehran and Rome-plus Pamela’s background in designing for the movies-the siblings are known to weave global textures and moments in time into a singular, cohesive narrative. Where their interiors exude a warmth and a freshness, their reverence for history serves as a guiding principle in their work. “We fantasize about the past,” Pamela says. “We love to do a lot of research to situate a project within its historical context, then take that information and bring it into the present.” 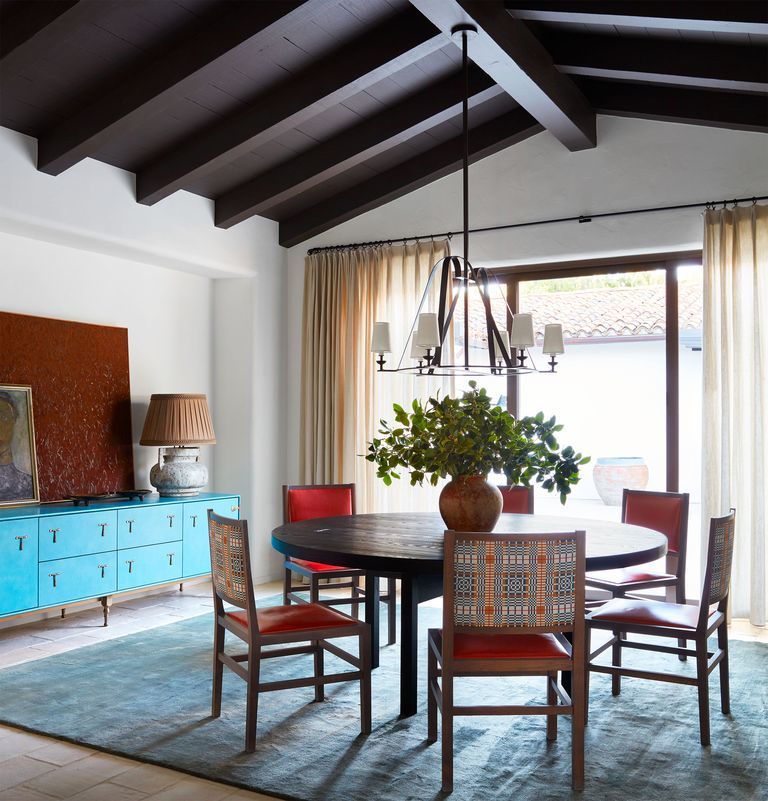 In the dining room, the table, chairs, and credenza are by BDDW. The lamp is by Chris Brock, the rug is by Christopher Farr, and the chandelier is custom.

As evidence, consider Studio Shamshiri’s latest project: an 11-bedroom, 1952 ranch-style home an hour and a half north of Los Angeles, with exquisite views of the Pacific Ocean. In the previous century, its architect had reinterpreted the Spanish mission as a residential space, tiling the low-slung gabled roof with slabs of terra-cotta and orienting the home around a U-shaped courtyard. 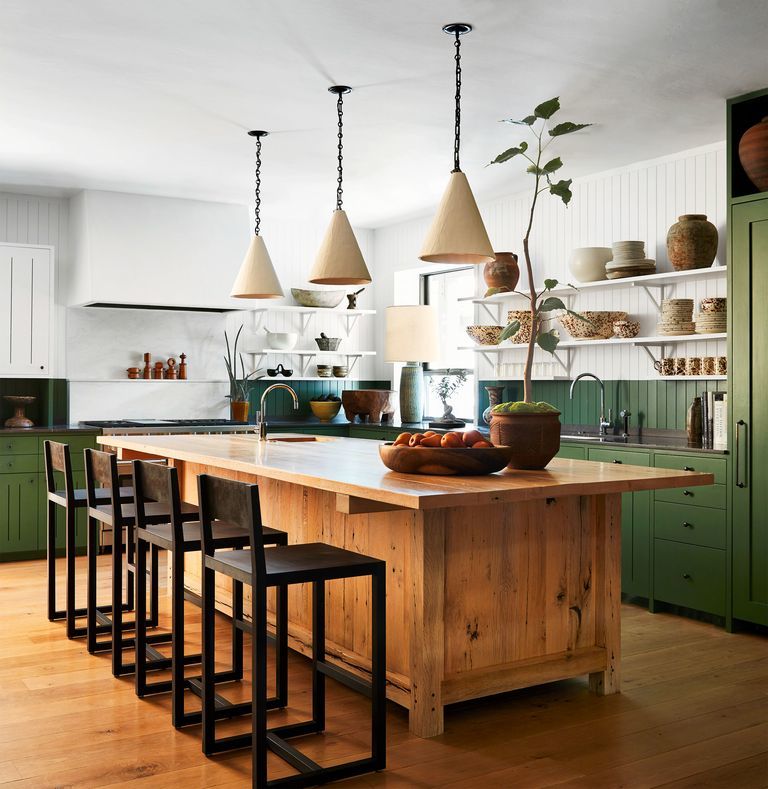 The custom kitchen island is by John Williams, and the stools are by BDDW. The range is by Wolf, the sink fittings are by Dornbracht, and the pendants are by Rose Uniacke. The cabinets are painted in Dyrehaven by Farrow & Ball.

“This for us is a California fantasy,” Pamela says, where the home’s original residents would have had to fly into the area and then complete their journey on horseback, parking their horses at the front door under the generously scaled porte cochere. It was that sense of the Old Hollywood western that they wanted to evoke, she adds. “We want our projects to feel like they’ve always been there.”

To capture the ruggedness of that era, the Shamshiri siblings paid close attention to materiality, emphasizing heft and texture while eschewing synthetics. As a general rule, “we try to avoid materials and finishes that off-gas,” Pamela says, “and we embrace natural aging.” Consequently, one of their first steps was stripping coats of polyurethane from the double front doors, bringing them “down to their original glory.” The white walls were refreshed with a limewash plaster, while the exposed beams on the interiors’ vaulted ceilings received a darker finish, aligning with the austerity typical of a Spanish mission. 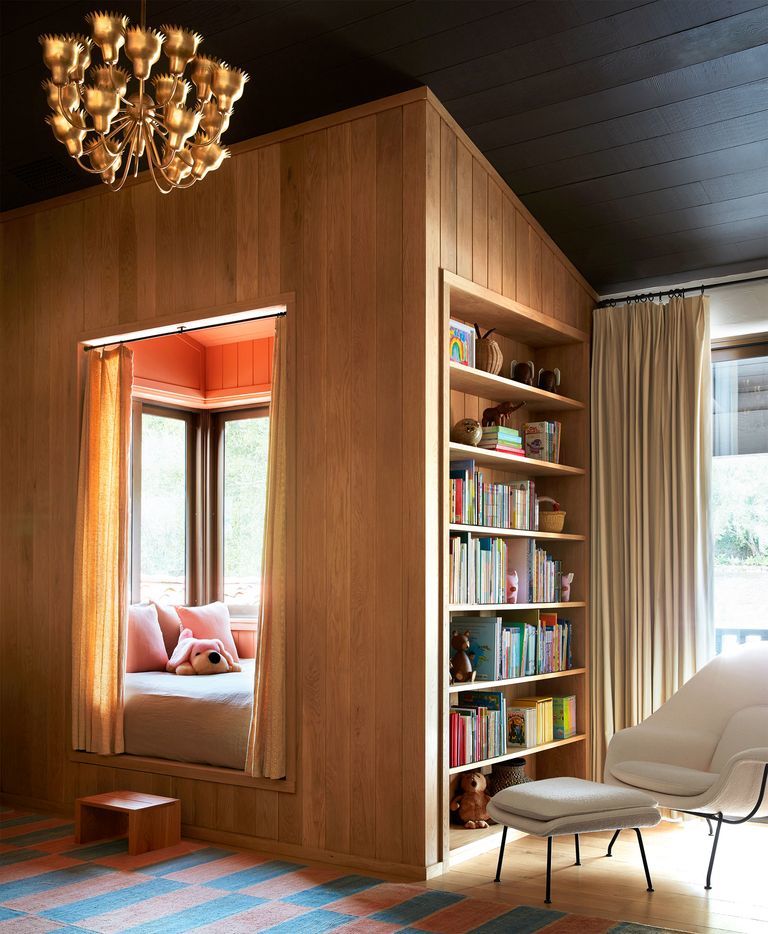 In the kids’ room, the encased bed is custom, the Turkish rug and Eero Saarinen chair and ottoman are vintage, and the chandelier is by Hans Bergström.

Throughout the house, the designers sought to soften that stark contrast with pops of color and texture, with an abundance of natural materials like wood, leather, and rattan. Hewing to the California ranch-style theme, these included pieces designed in the same era but in other parts of the world: plush shearling midcentury sofas from Scandinavia, for example, and over the family room, a traditional Japanese paper lantern. “With the furnishings, we really embraced a lot of curves,” Pamela says. “The house is so masculine, and so that tension was good for it.” 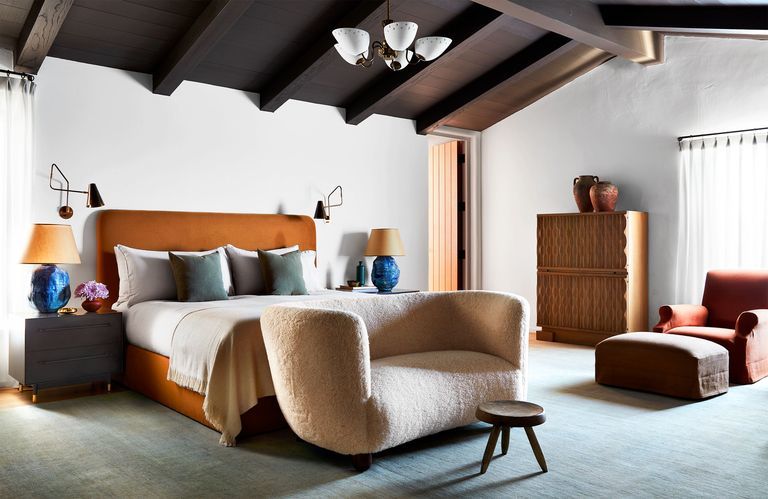 In the primary bedroom, the bed is custom, and the BDDW nightstands are topped with lamps by Adam Silverman. The sconces are by Lumfardo Luminaires. The sofa is by Viggo Boesen, the Charlotte Perriand stool is vintage, the chair and ottoman are by Oliver Gustav, and the rug is by Christopher Farr. The vintage chandelier is Swedish.

Much of the furniture for this project already belonged to the clients, she adds, describing them as an academically oriented East Coast couple raising three young children. “We had just finished a house with them in New York, and so there’s a lot of links to their past life that we’ve introduced into this house,” she says. “I think people should reuse and reinvent pieces, and so the challenge of the job was to adjust their palette and bring it into the West Coast.”

For the living room, that meant reupholstering the family’s formerly red-wool Rietveld armchair in a brilliant sky-blue twill and integrating newly commissioned works by Los Angeles artists and designers. John Wigmore designed the pair of ceramic sconces mounted on the living room walls, and John Williams constructed both the “indestructible” coffee table and the farmhouse-style island anchoring the kitchen. To further soften the interiors, cozy nooks abound: The primary bathroom includes both a salon-style reading room and a Japanese hinoki cedar tub, surrounded by soft pink plaster walls. The children’s beds are also enclosed in mini cabins, a favorite feature of their former home in New York. 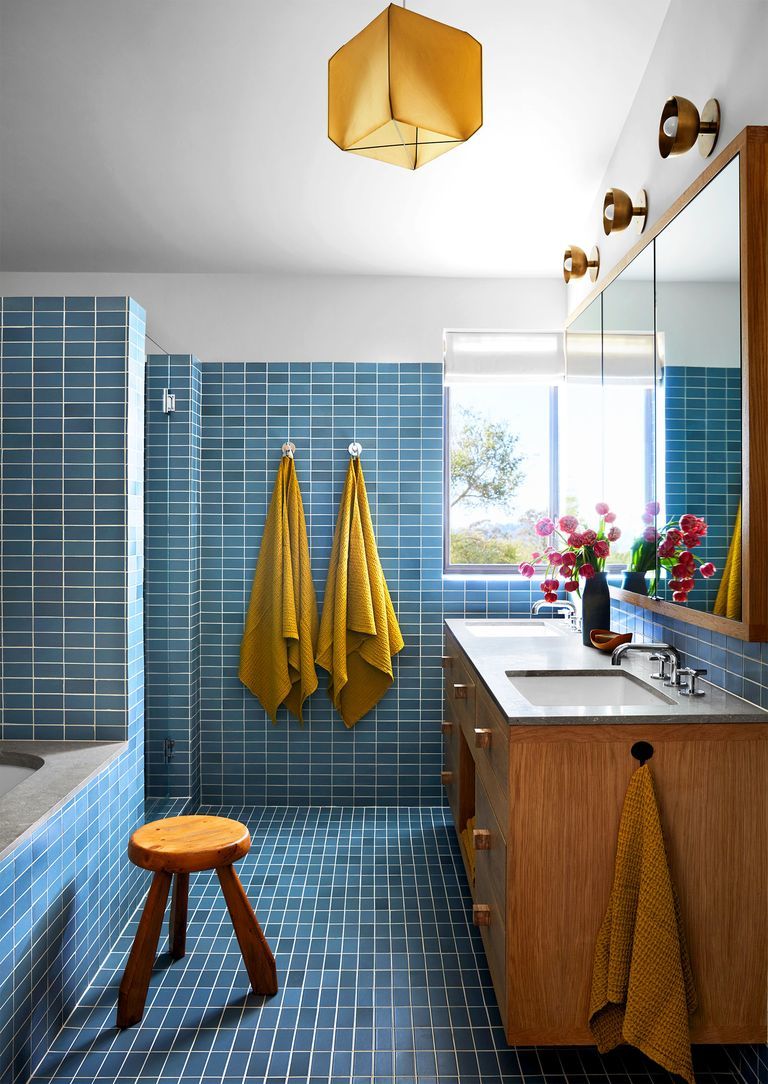 he kids’ bathroom has custom cabinets, and the sink fittings are by Waterworks. The vintage stool is by Charlotte Perriand, the sconces are by Apparatus Studio, and the floors and walls are clad in Field tile by Heath Ceramics. The pendant is by Bruno Munari.

In the true spirit of Southern California design, the house embodies a singular narrative made of global influences and disparate histories, including that of an East Coast family starting a new life on the West Coast. According to their mantra of creating spaces that feel like they’ve always been there, this is exactly Studio Shamshiri’s specialty-to cultivate a sense of belonging, no matter the time or place. 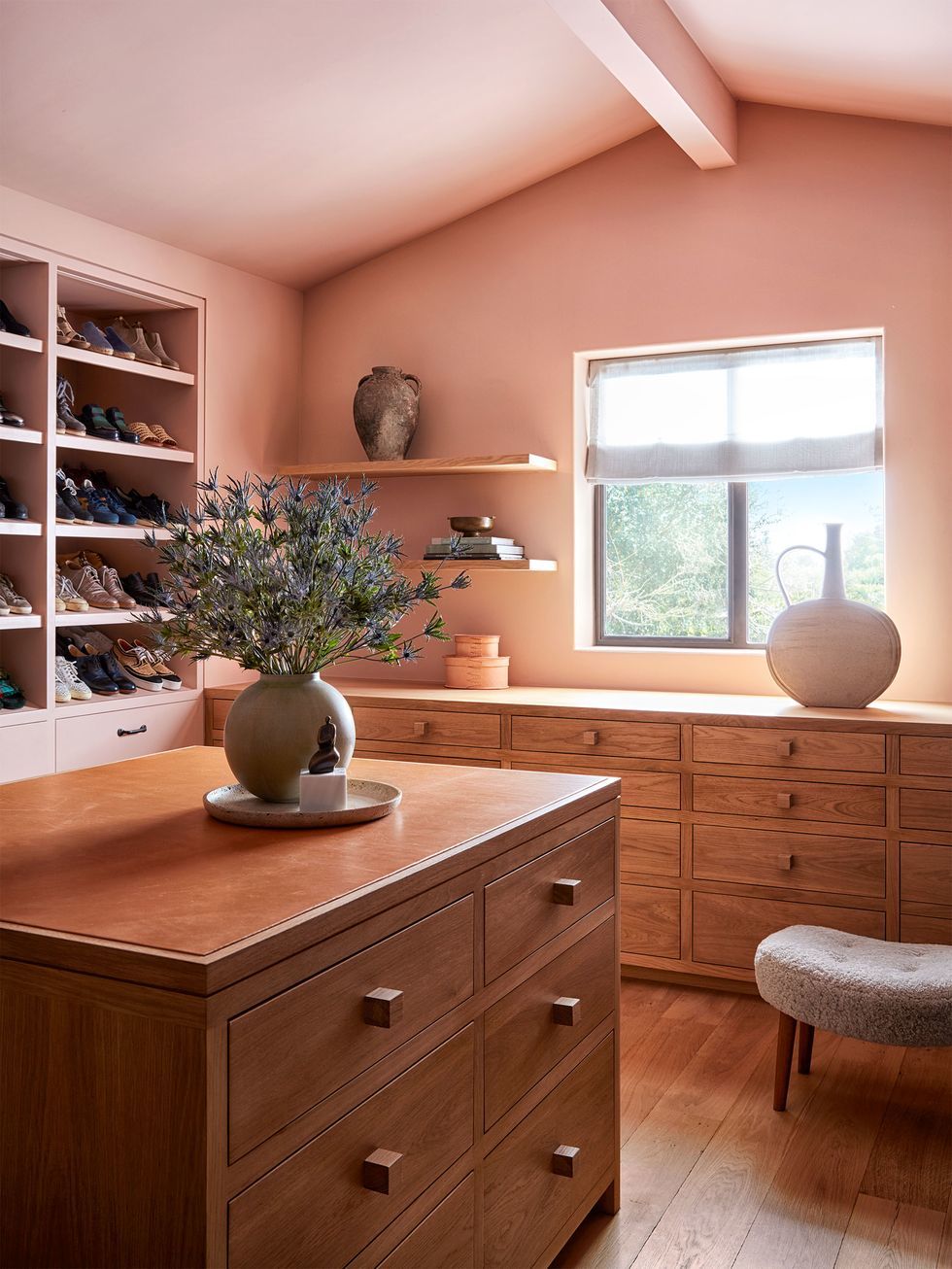 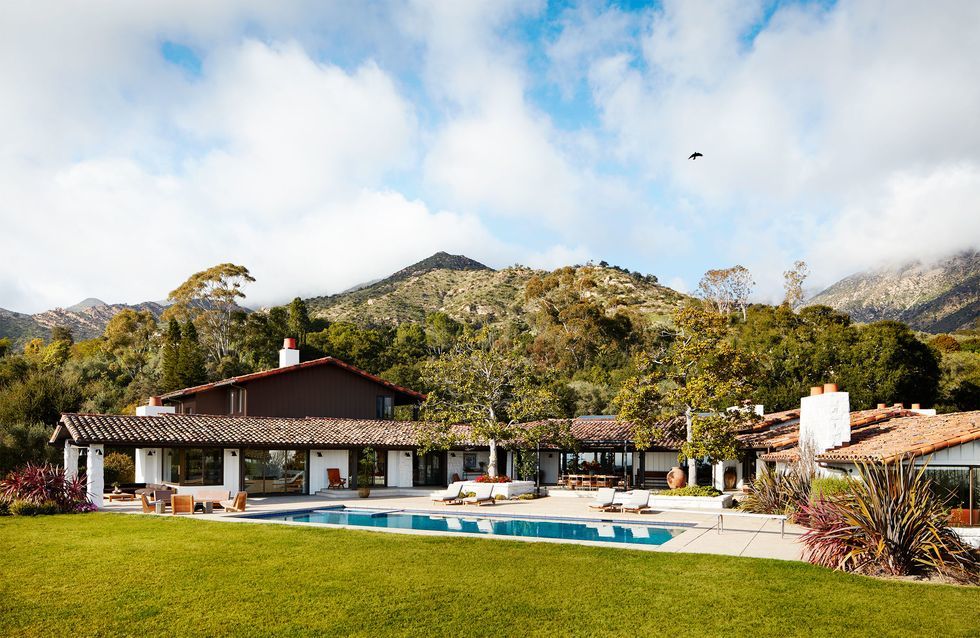