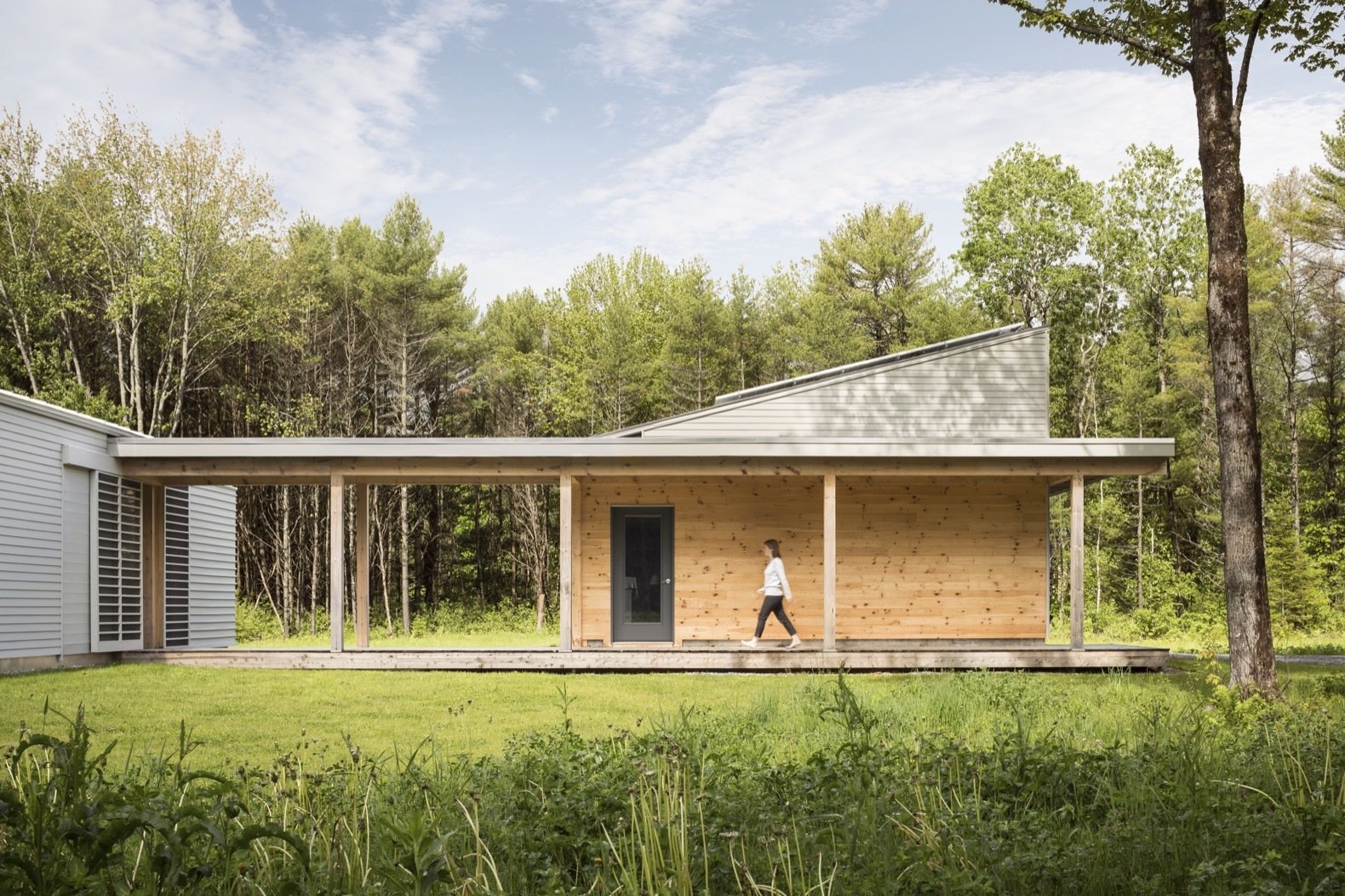 With their three children grown up and out of the house, Nico and Ellen Walsh were ready to downsize from their old Victorian home to a smaller abode better aligned with their environmentally friendly principles.

When the couple spotted Belfast-based design-build firm GO Logic’s LEED Platinum GO Home on the cover of Maine Home and Design Magazine, they instantly fell in love with the modern high-performance design and the possibilities of a nearly net-zero energy house. 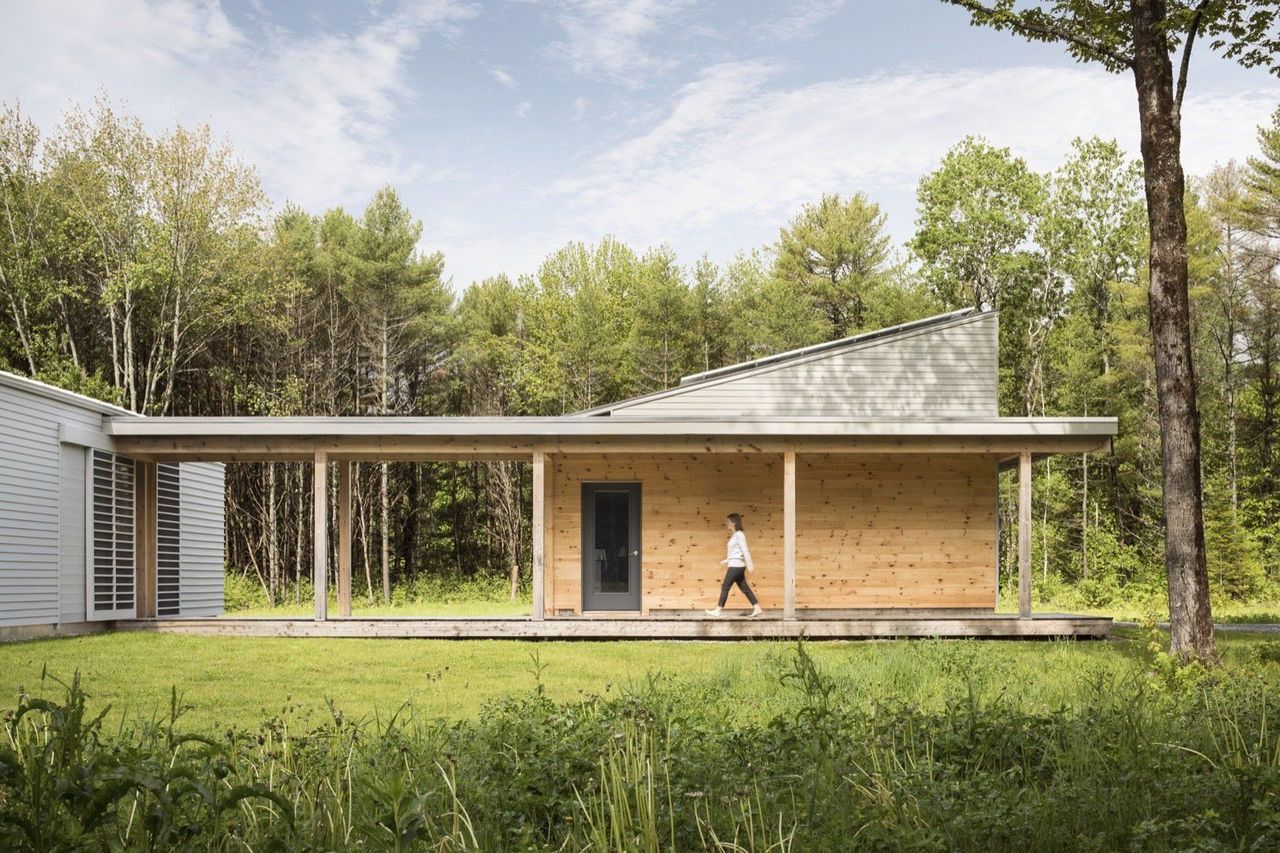 Completed in 10 months on a flat meadow atop a wooded bluff near the Cousins River estuary, the energy-efficient residence emphasizes indoor/outdoor living for a pair of nature lovers.

After meeting with the GO Logic team, the couple decided to forego a direct replica of the GO Home in favor of a modified version that better suited their needs while retaining the benefits of low maintenance, energy savings, and reduced site impact thanks to the architects’ use of panelized construction. 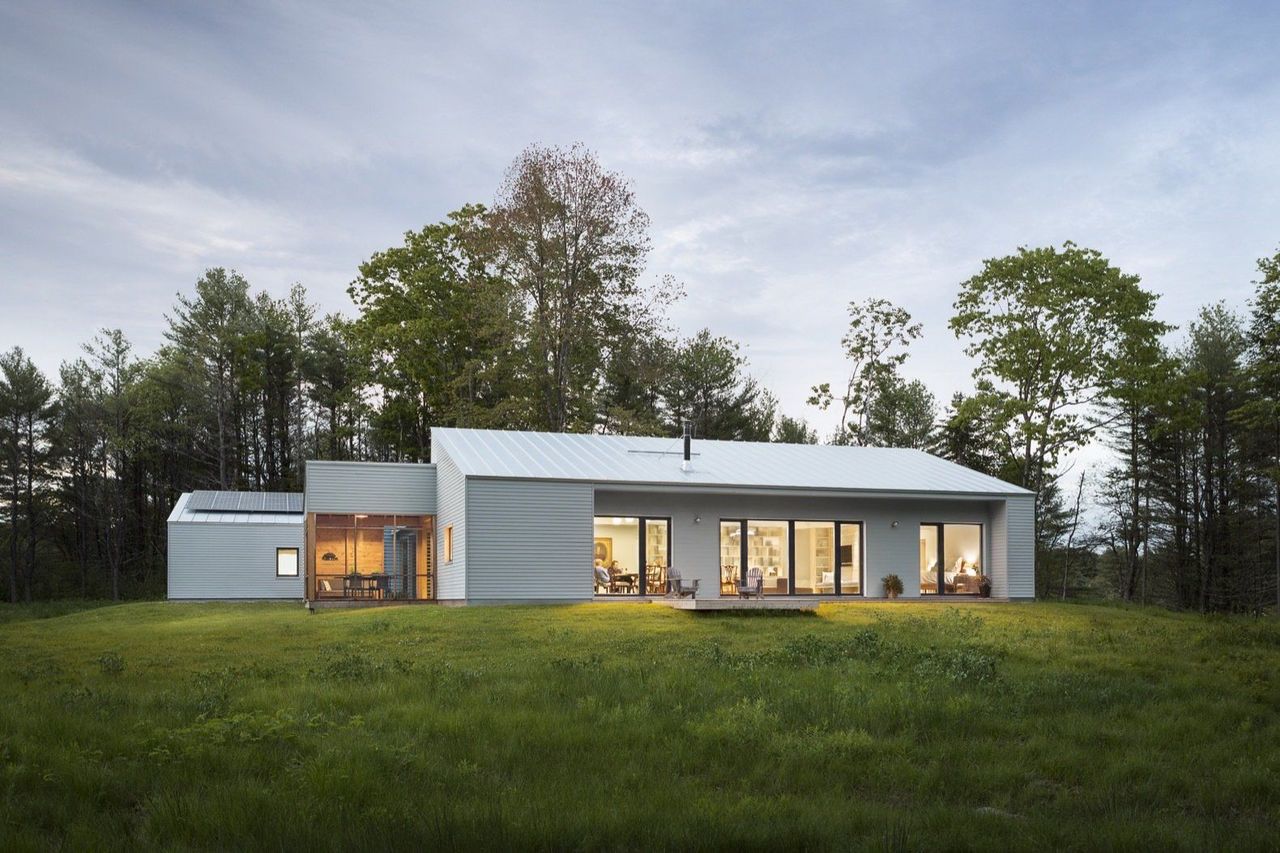 Set back from the road at an angle to minimize views from the road and to maximize connection with nature, the home is a quiet and private sanctuary. The photovoltaic panels on the garage can feed excess solar energy back to the grid.

"At that time, we had been using prefabricated wall panels for a few years already and it was part of our standard construction method," says GO Logic Principal Alan Gibson, who began work on the Cousin Rivers Residence in the summer of 2013. "Building with prefab components allows for a quicker close-in of the structure so that damage from moisture is minimized. The overall project completion timeline is shorter as well, and labor costs are reduced since the panelized components are pre-cut." 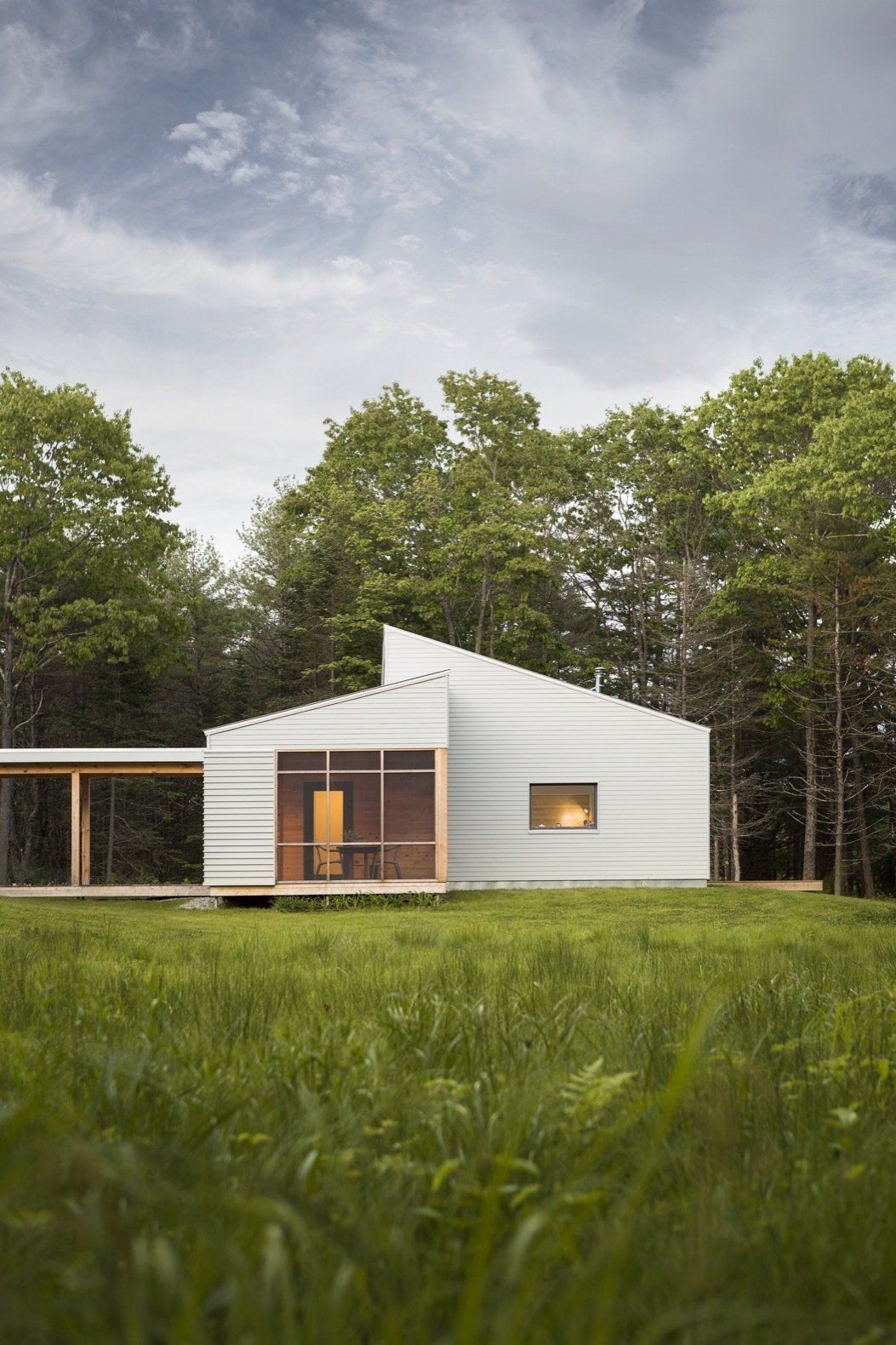 "The walls consist of a stick-framed stud wall with prefabricated structural insulated panels attached to it, made off-site in a facility to our design and specifications," explains Gibson. "The roof structure consists of trusses built off-site."

Since the Walshes wanted a home- conducive to aging in place, the couple opted for a 1,600-square-foot, single-level layout with three mono-pitched volumes-the main house, the screen porch, and the garage-connected via a long covered walkway. Inside, the open floor plan is oriented to take advantage of solar gain with large south-facing windows that frame views of the pine forest. 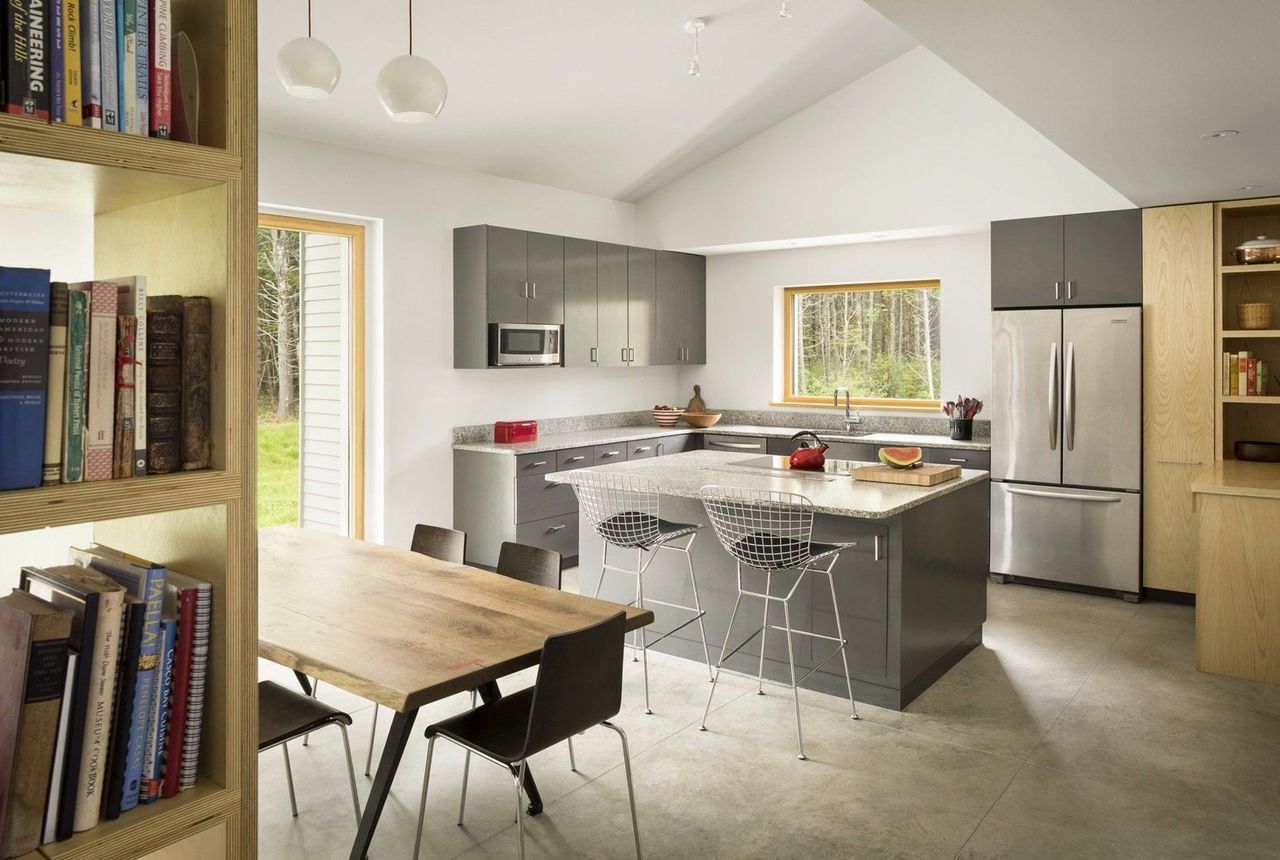 A subdued color palette is used throughout the home. In the kitchen, custom timber cabinets by North Yarmouth carpenter David Sprague are painted gray and topped with Freshwater Stone granite. The kitchen island seats are Baxton Studio Bertoia-style wire bar stools, while the dining table is by District Eight Design.

To meet Passive House standards, the Cousins River Residence features an airtight building envelope, triple-glazed windows with a u-value of 0.16, a heat recovery ventilation system with 90% efficiency, and a 4.6 kW south-facing photovoltaic array on the garage roof that makes the house nearly net-zero energy. 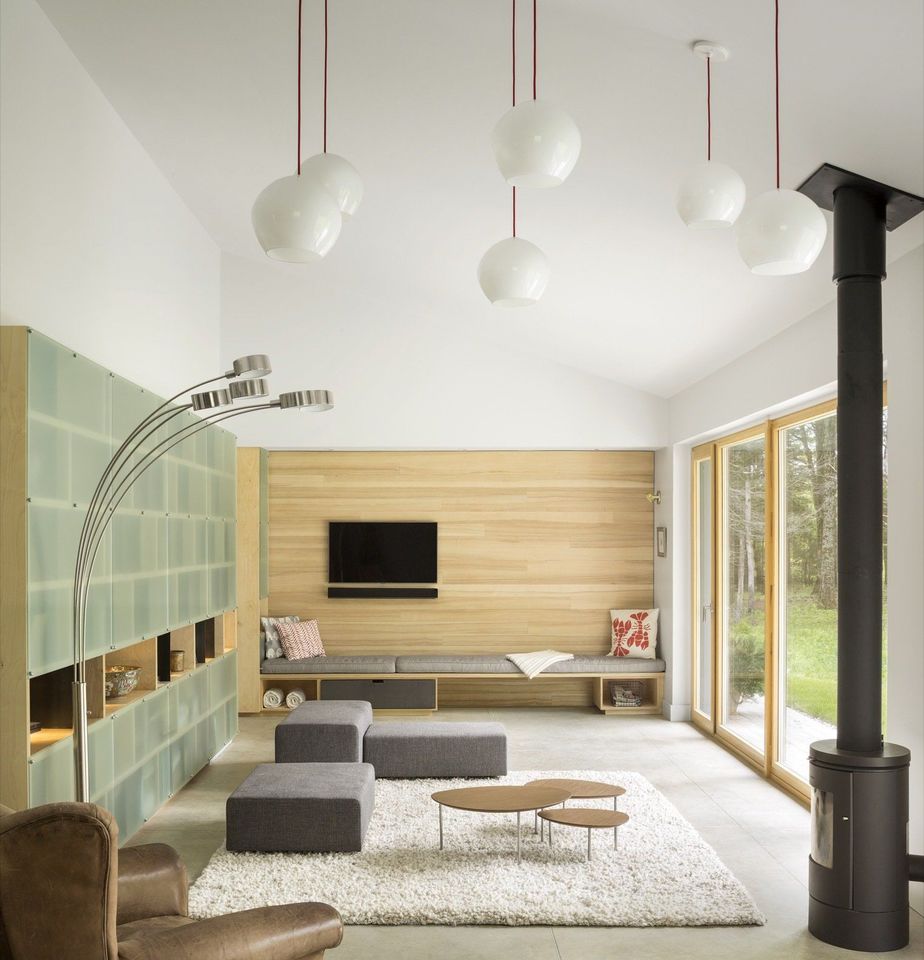 Anchored with an ash accent wall with a built-in daybed, the midcentury-inspired living room features a Living Divani modular sofa and Tech Lighting pendant lamps. On the left is the custom double-sided bookshelf covered with acid-etched glass that divides the living space from the bedroom hall. 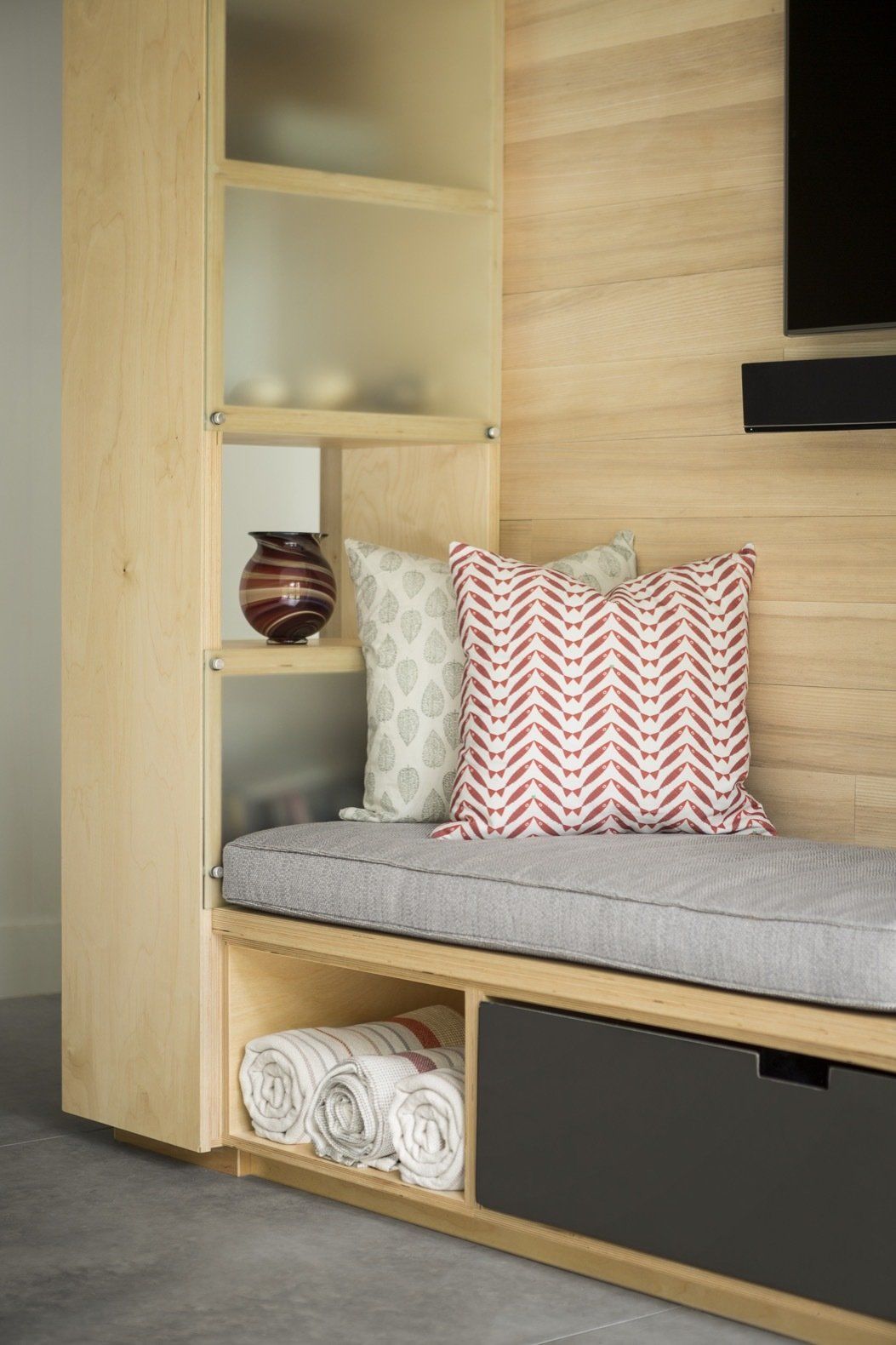 A close-up view of the built-in daybed and custom shelving, which allows light to filter through to the hallway behind.

In the winter, the home is mostly heated by passive solar gain. The concrete floors (treated with a dye to mimic limestone) provide thermal mass, while a small wood-burning stove supplies supplemental heating. 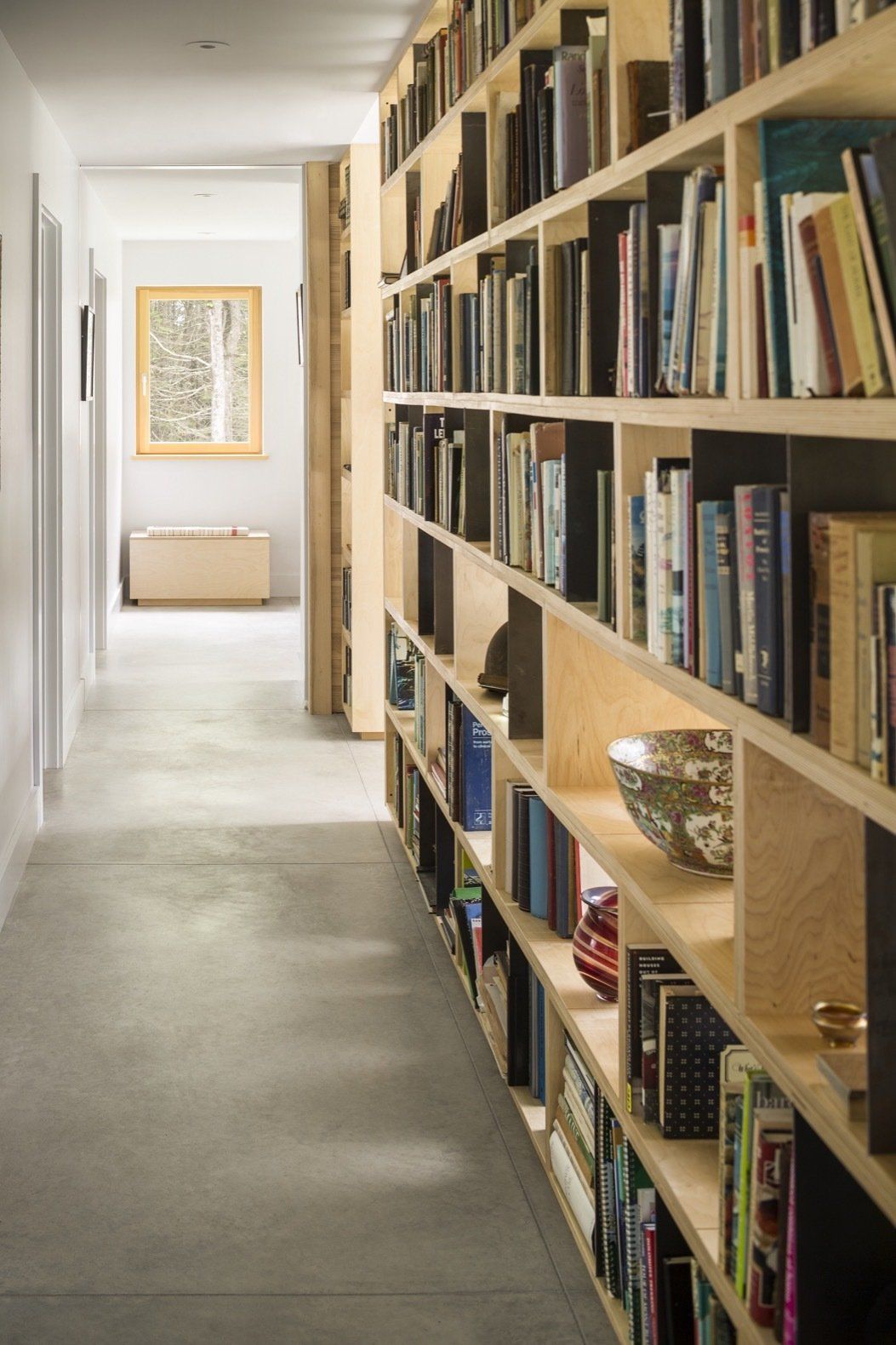 A view down the bedroom hall with a glimpse of the master bedroom straight ahead. The hall connects to two secondary bedrooms on the left side. 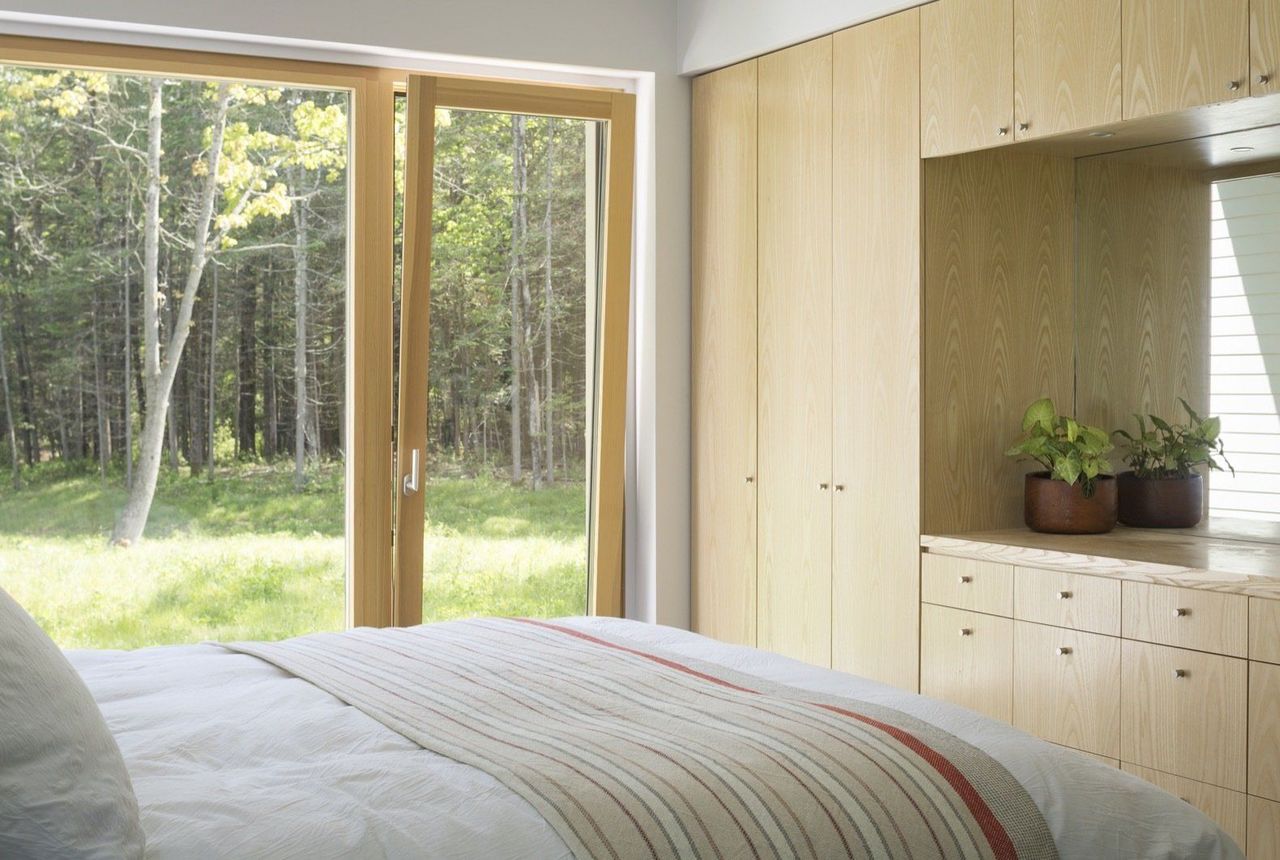 The bedrooms feature custom ash millwork, while large windows invite views of the outdoors in.

"This home was a second version of the GO Home, so the challenge was to incorporate new elements like a breezeway and screen porch, along with their specific wants for finishes," notes Gibson.

"But all the parts that were challenging also ended up being the most interesting: the way the breezeway connects to the entry and screen porch; the screen porch itself; the higher end finishes such as the kitchen, bookshelf/display, and bedroom casework; plus the tile work in both bathrooms. The way the house is sited to offer solitude to the south is really nice too." 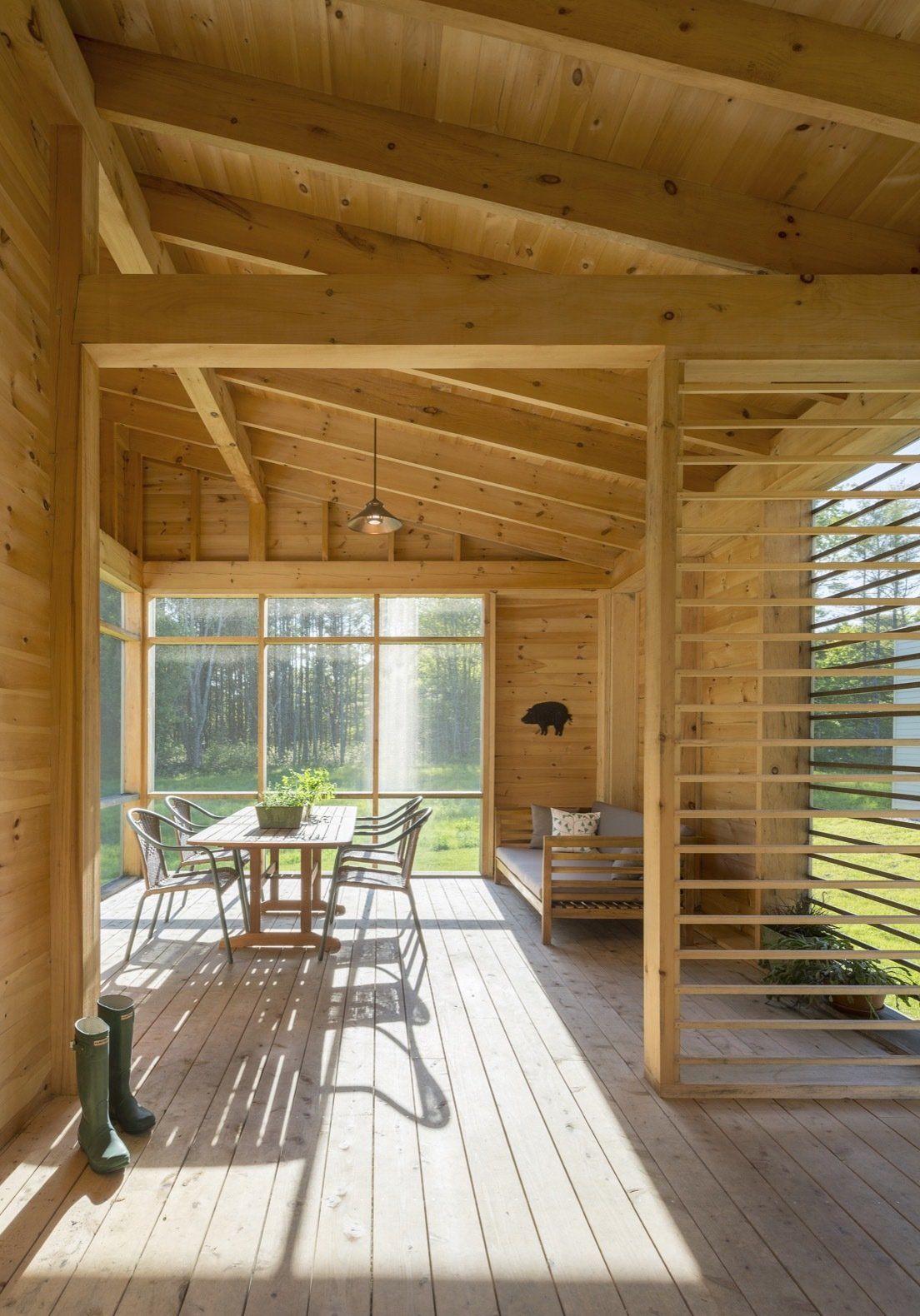 A look inside the post-and-beam screen porch built with locally sourced eastern white pine. The floors are Port Orford cedar. 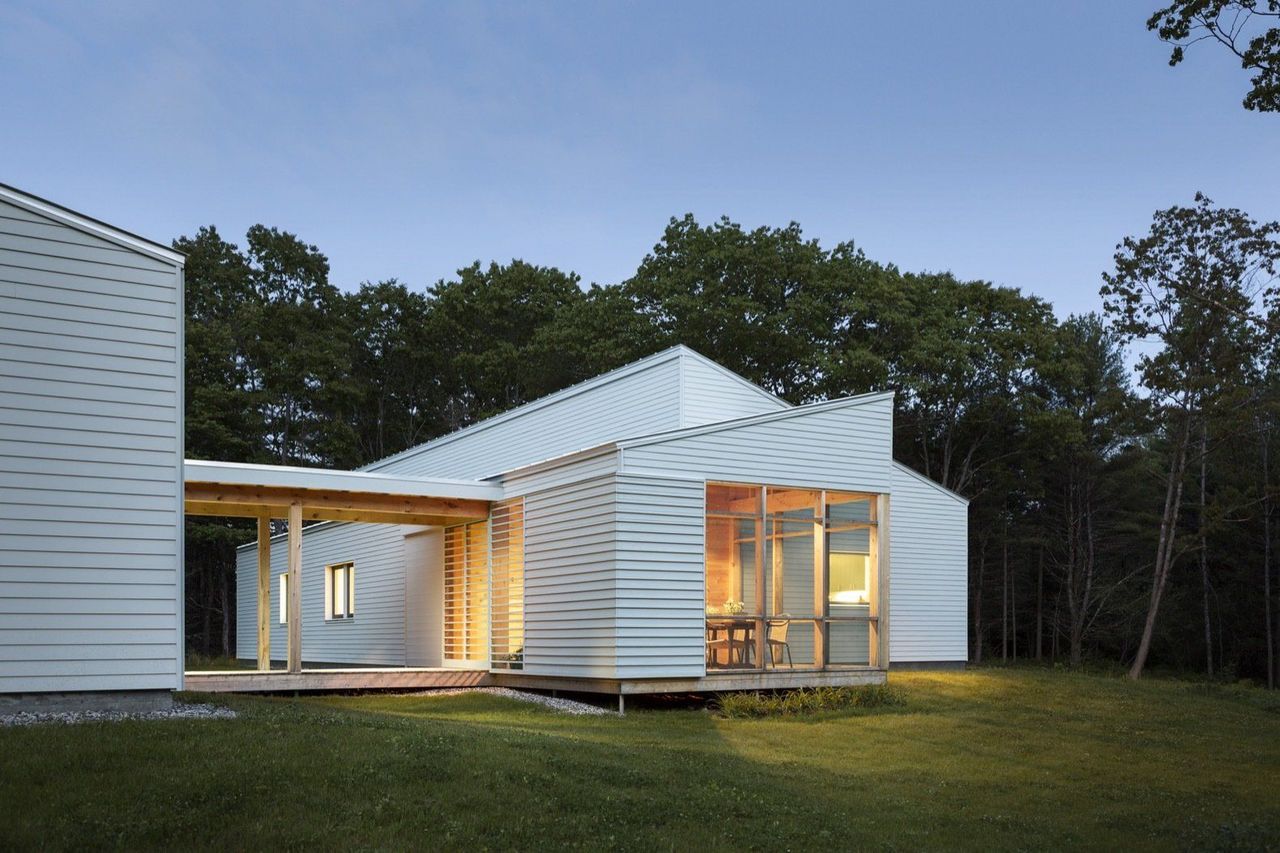 Fiber-cement siding by Allura emphasizes the horizontality of the house and, along with the standing seam metal roof, nods to the traditional New England vernacular. 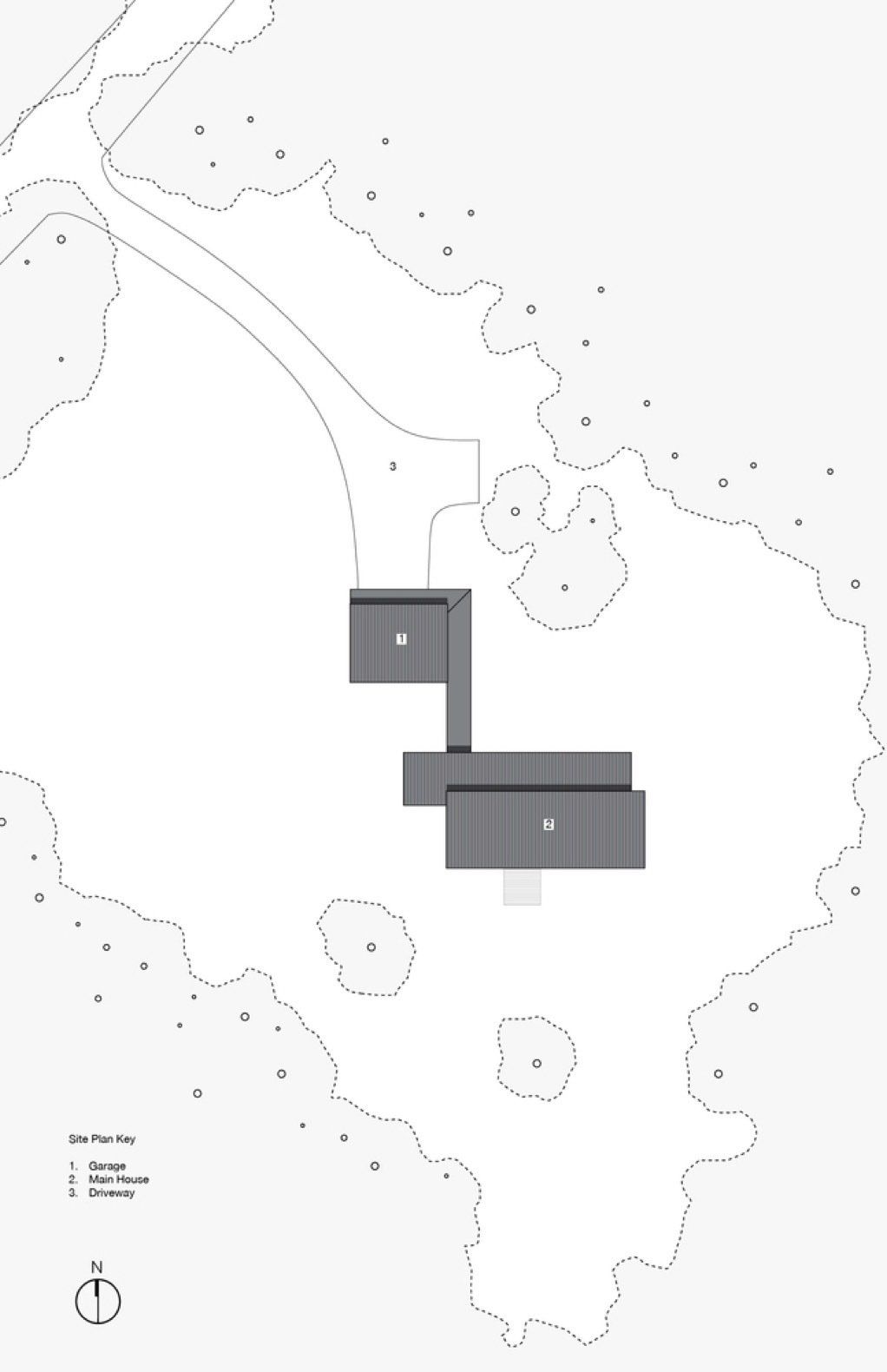 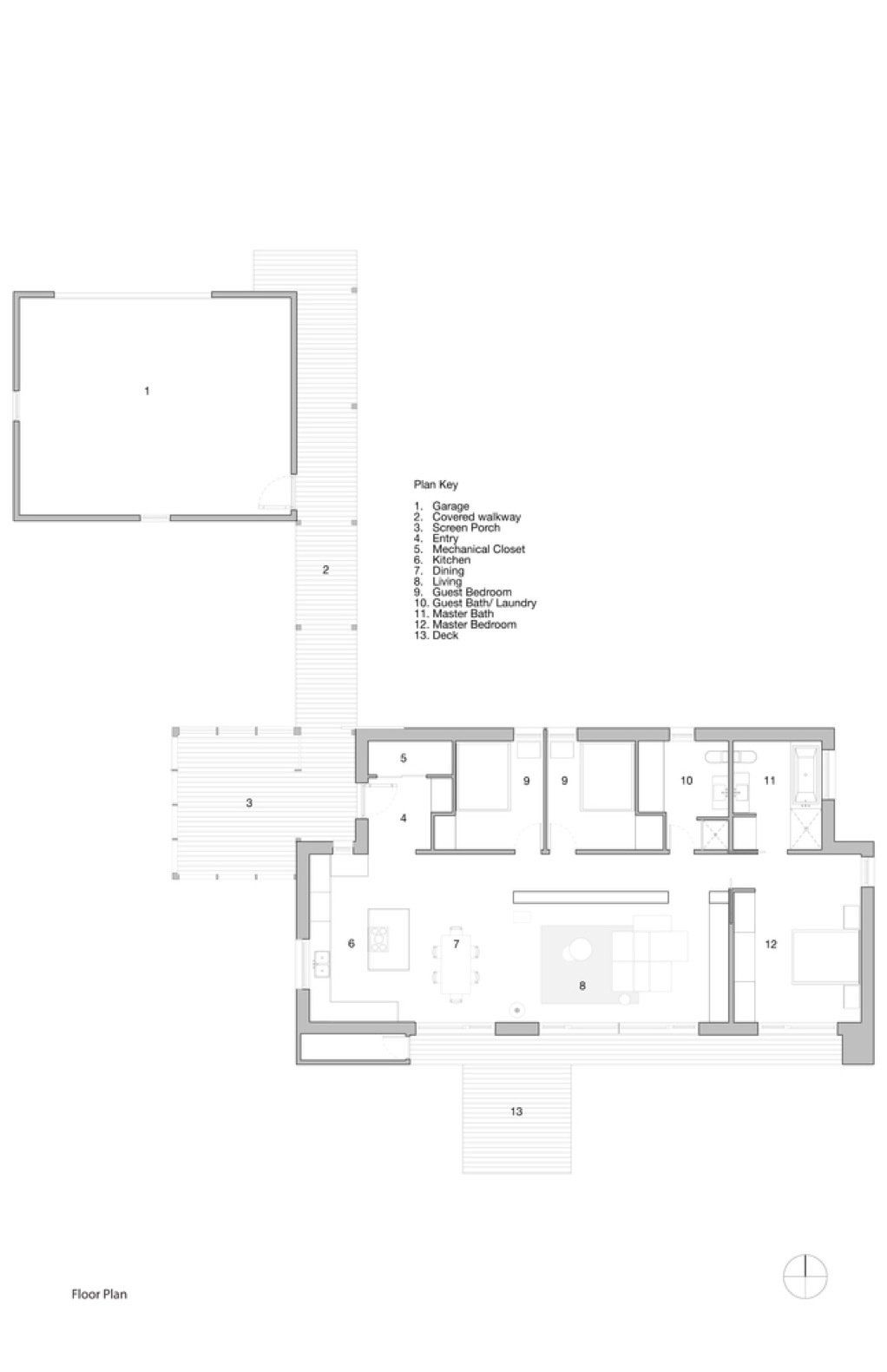