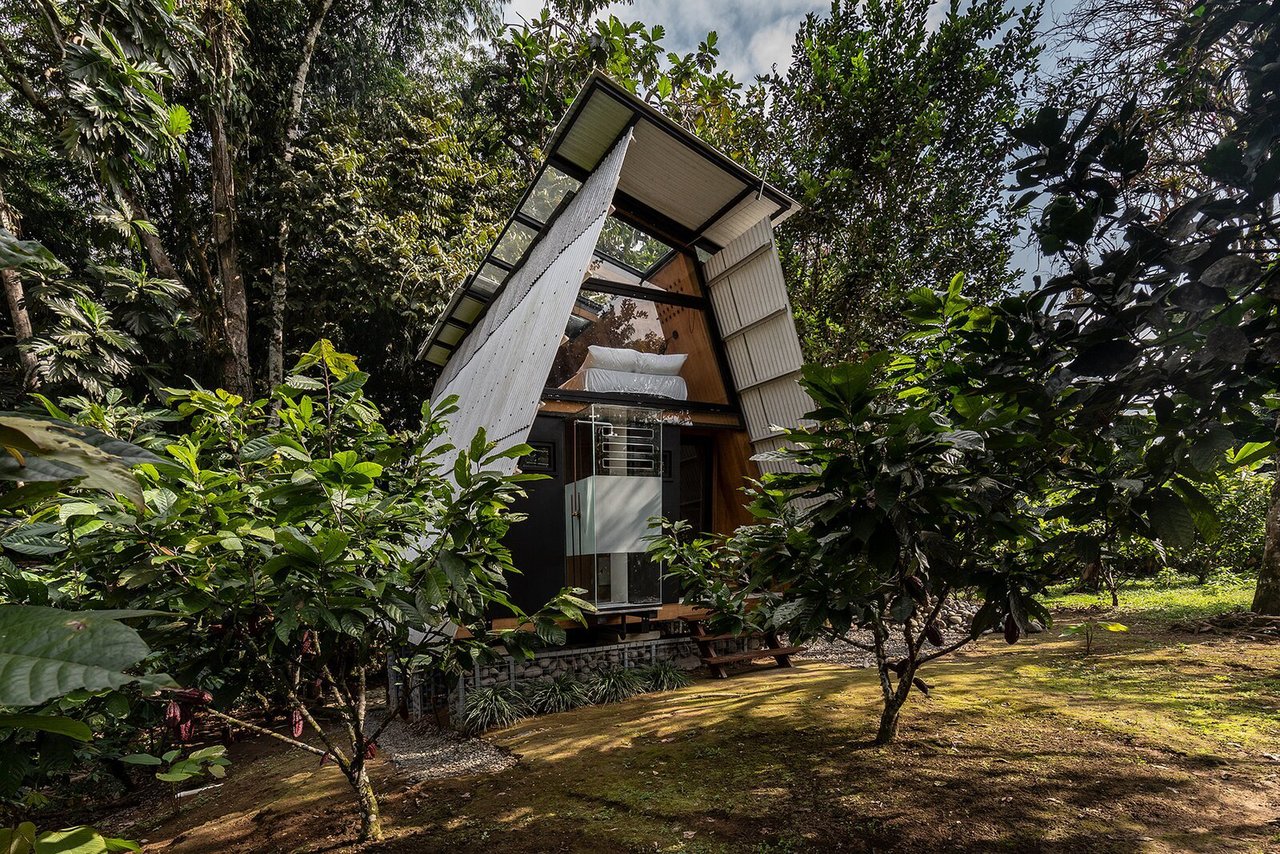 The architects’ tiny, modular retreat uses sustainable materials and building techniques to leave the surroundings pristine for the next generation.

When architects Diana Salvador and Javier Mera came together to design Huaira Cabin, a 430-square-foot retreat in Puerto Quito, Ecuador, they identified sustainability and a connection to nature as two major goals. "We use the cabin once a week as our refuge outside the city," Salvador says. "Contact with nature is a very important part of our lives. Huaira Cabin reflects our ideology; we prefer to live simply."

Built on farmland located two and a half hours from Quito, Huaira Cabin is situated on the banks of a small river, named Roncador, and surrounded by cocoa, orange, and banana crops. Puerto Quito is part of Ecuador’s tropical forest and experiences a year-round temperature of about 77 degrees Fahrenheit and plenty of rainfall.

In response to this climate, Salvador and Mera raised the two-level home off the ground on gabions, or cages filled with rocks, to prevent flooding. The void between the earth and the ground floor traps cooler air beneath the interior of the cabin, ventilating and cooling it. Double walls-plywood on the interior and Tetra Pak on the exterior-and a double roof-glass on the interior and Tetra Pak on the exterior-allow cooler air to flow through the layers and wrap around the home. Perforations in the walls and the flooring facilitate cross ventilation. 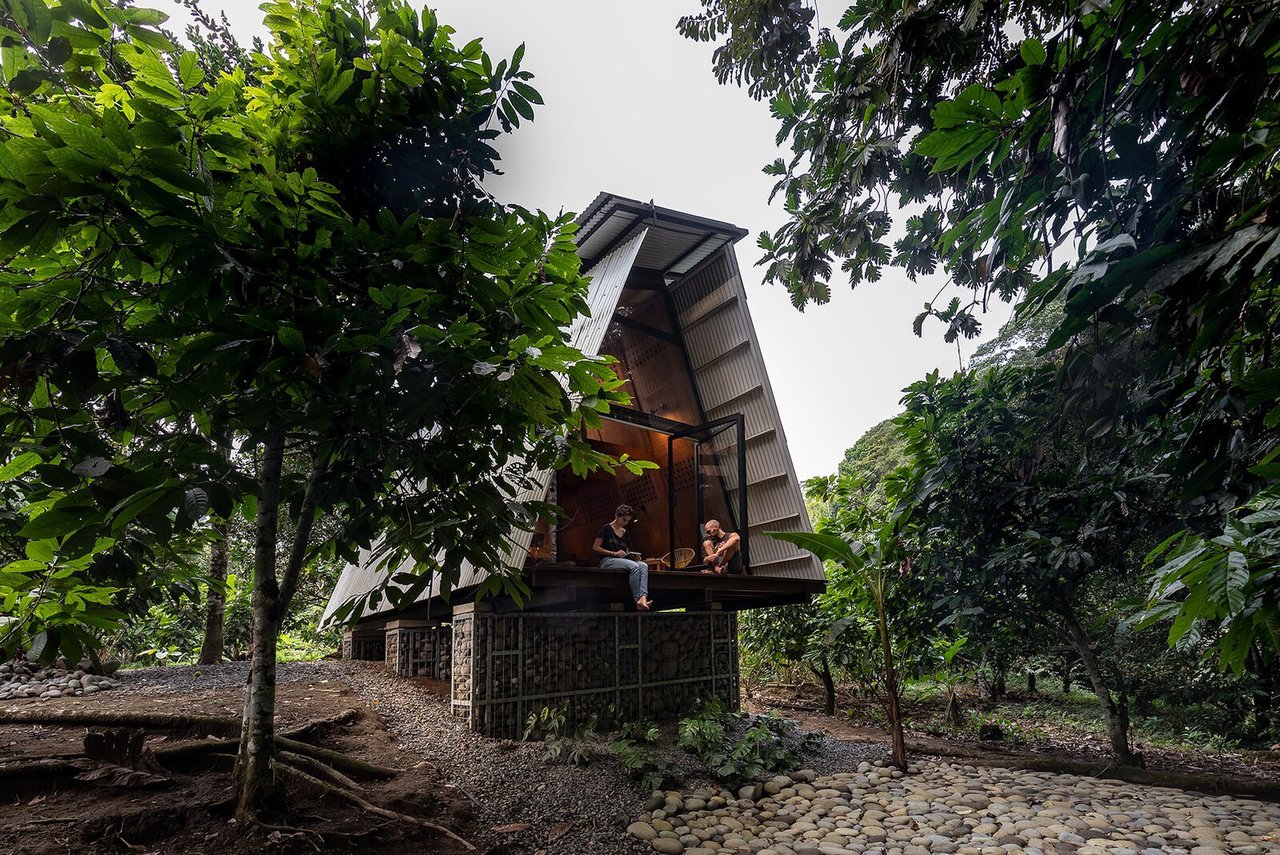 The cabin is elevated by a system of gabions that act as its foundation and prevent flooding. The rear facade features a teak deck where visitors can sit outdoors. 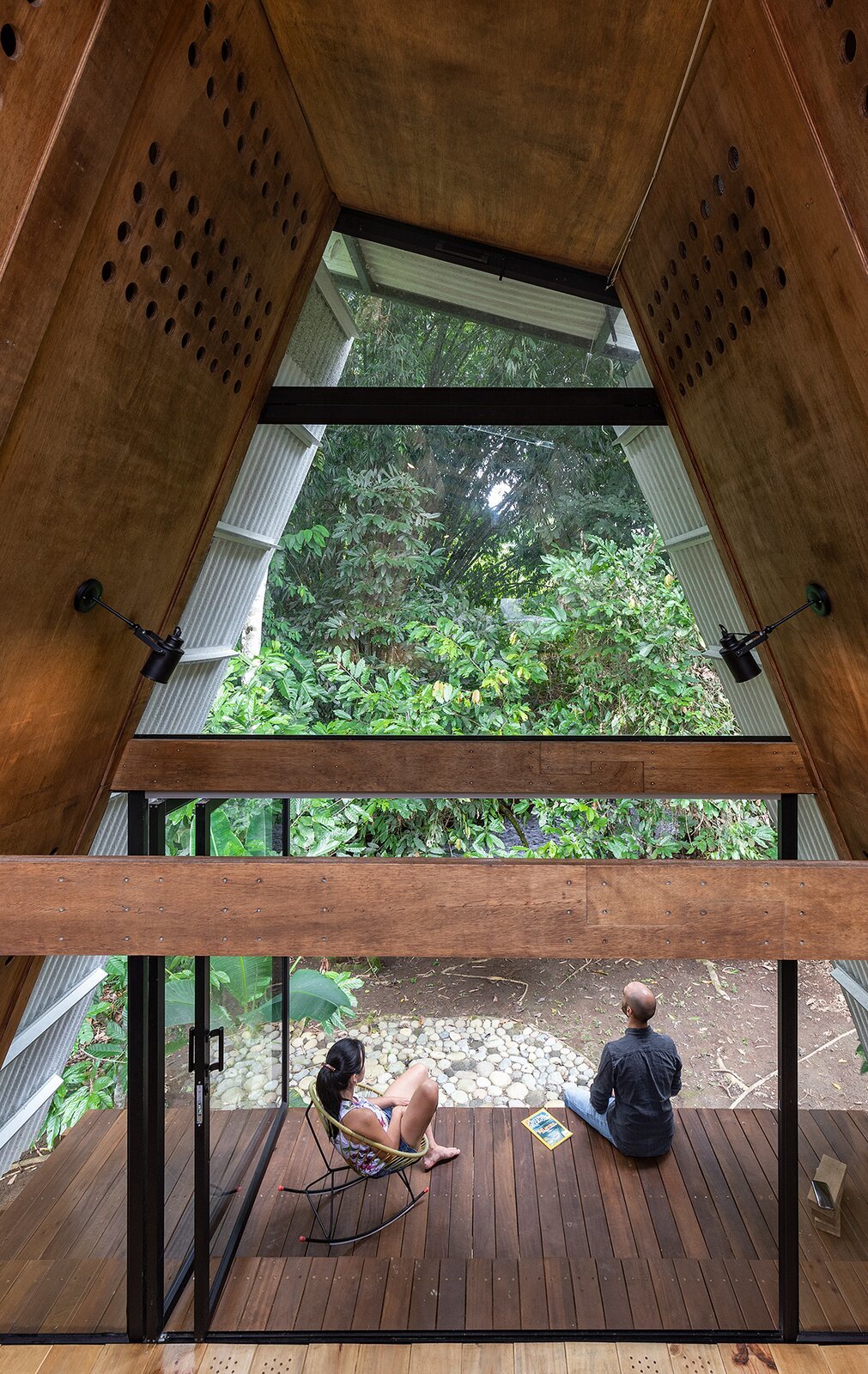 The two-level cabin opens to the outdoors via a folding glass door.

The architects tied the cabin’s interior to the natural landscape in three different ways. The roof’s metal layer slides open to reveal the inner glass membrane. "The removable layer allows me to control direct sunlight without losing the connection to the sky and the environment," Salvador says. On the rear facade, a floor-to-ceiling glass wall and a folding glass door open the interior to teak decking, the river, and the lush vegetation surrounding the cabin. And on the front facade, a cantilevered glass shower provides the sensation of bathing outdoors. 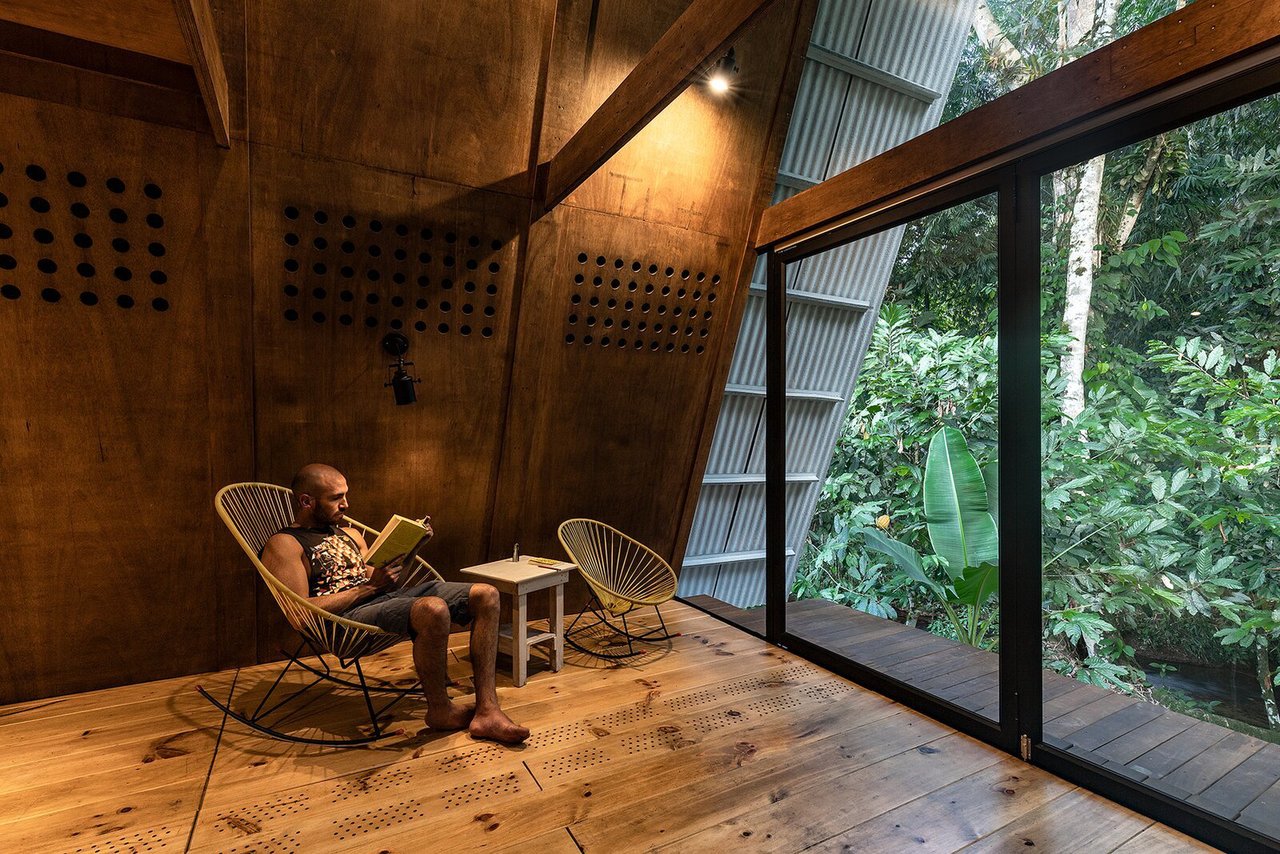 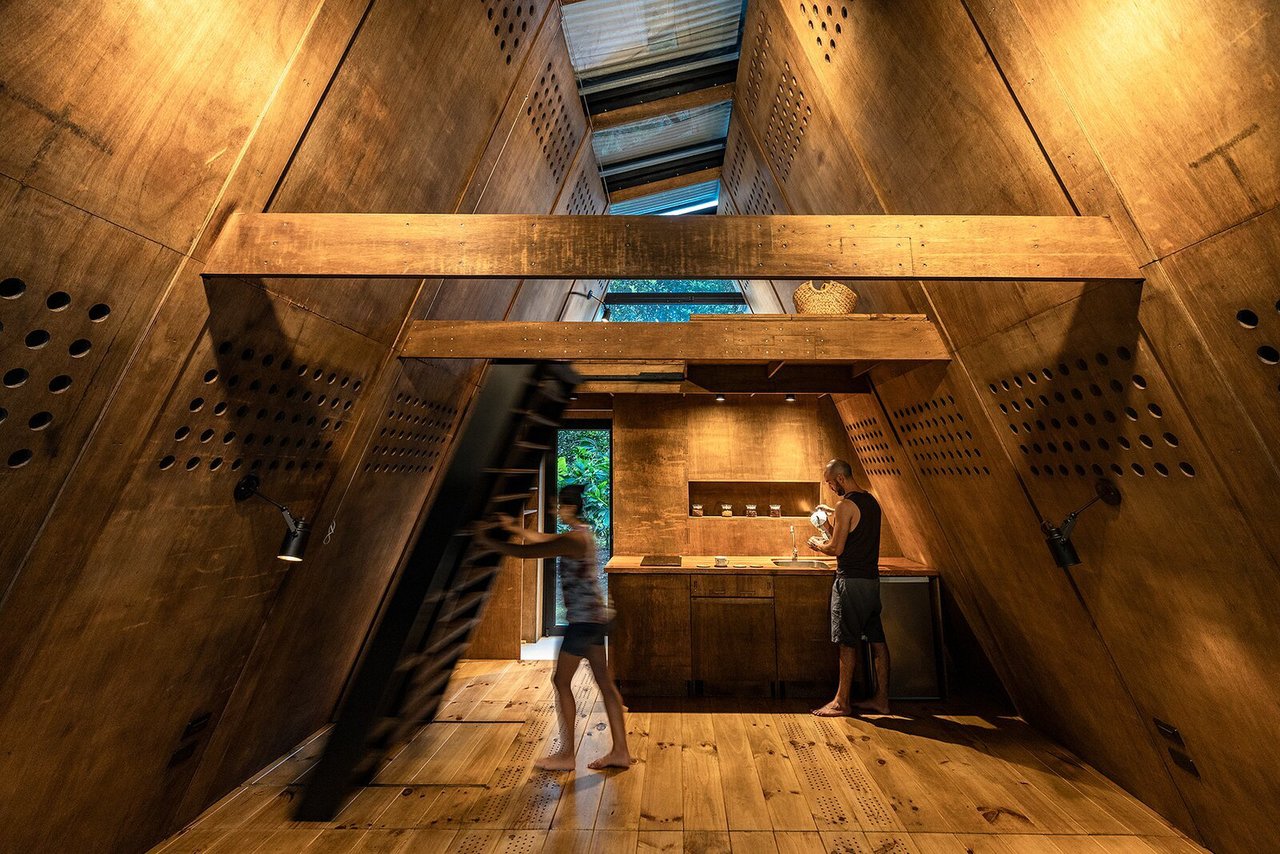 A large metal staircase near the kitchen folds up and provides access to the loft-like sleeping area.

An open floor plan provides flexibility for the owners and continues the theme of connection to the natural surroundings. The living room, kitchen, and a bathroom are located on the lower level, while the loft-like bedroom is accessed via a moveable staircase. "Every space has a function, but also gives the sensation of being outdoors," Salvador says. "Taking a shower allows you to see how cocoa is farmed. And at night, instead of counting sheep to go to sleep, you can count stars. Cooking and eating become a meditation exercise." 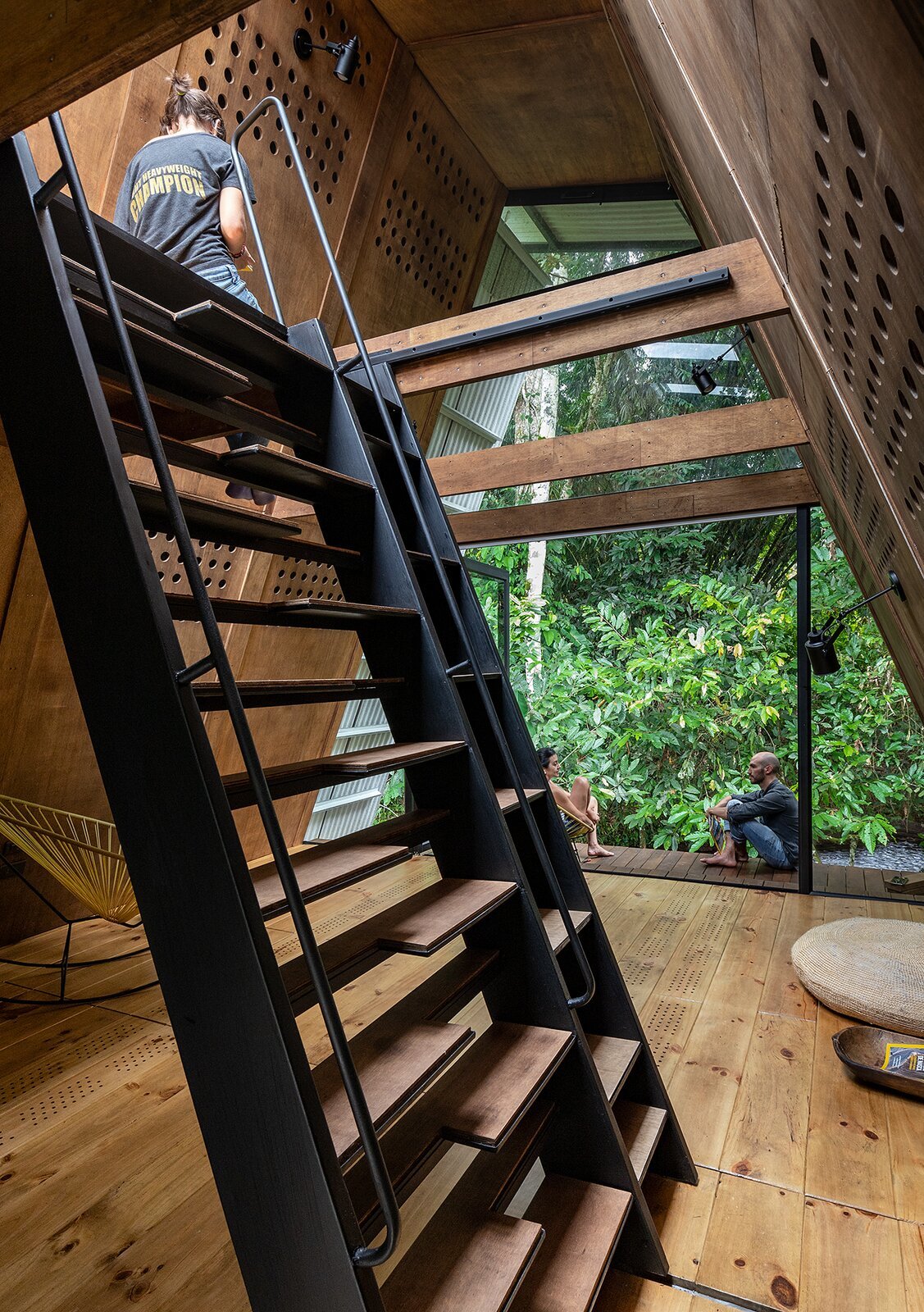 A sparse array of furnishings keeps the flow between the front and back of the cabin clear. 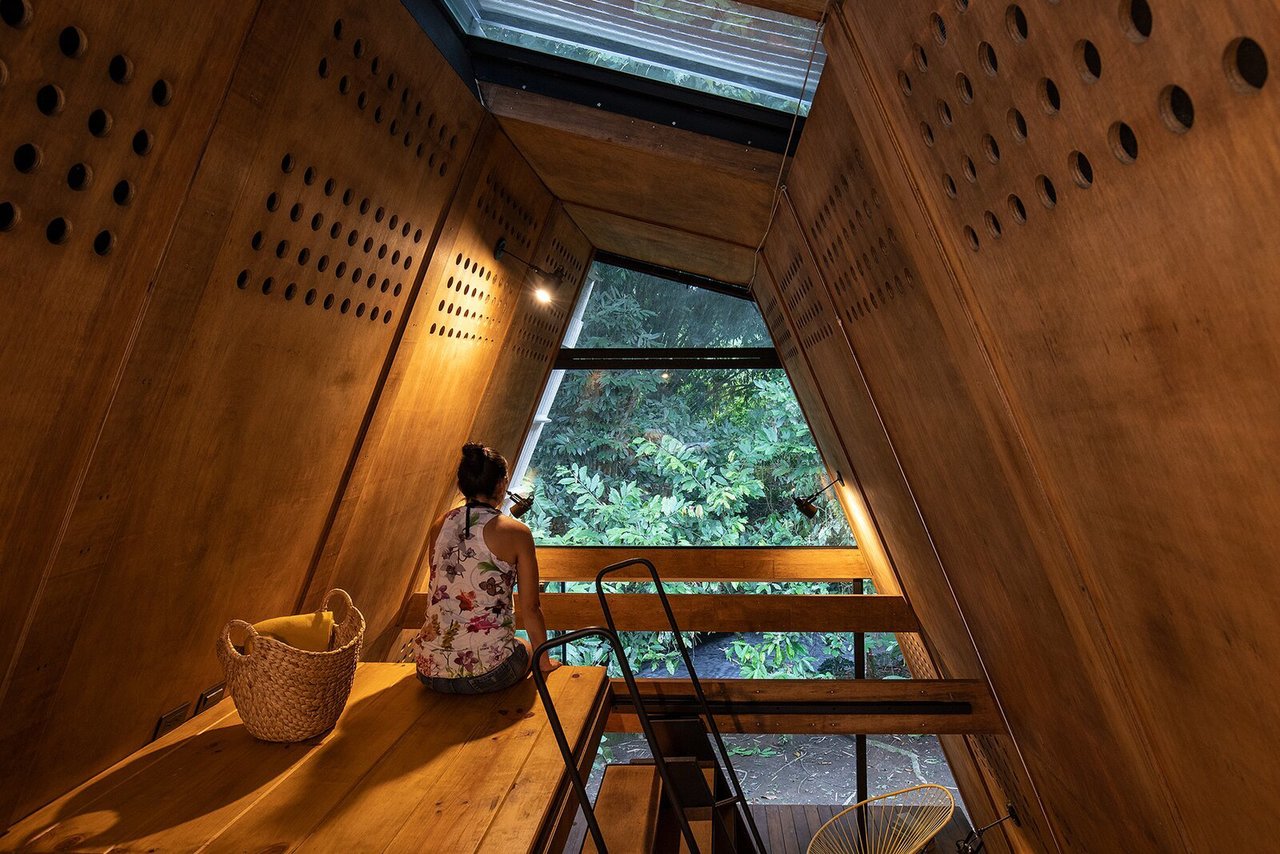 The loft-like sleeping area offers views of the forest.

Though it’s not apparent, the cabin features a modular quality that helps protect the natural landscape. "It’s low-impact and is made up of assembled pieces, like a large-scale Lego construction that can be transported in a single truck," Mera says.

In fact, Huaira Cabin boasts a negative carbon footprint. "We wanted to create a solution without generating more problems or waste," Salvador says. "Design and construction have to be done responsibly. As a client and as a mother, it’s important for me to think about future generations and the quality of the environment they’re going to inherit." Salvador wanted a retreat that would be economically sustainable, too. "When we stay in the city, Huaira can be rented out as a tourism getaway," she says. "This modality allows us to obtain income to pay for the financing." 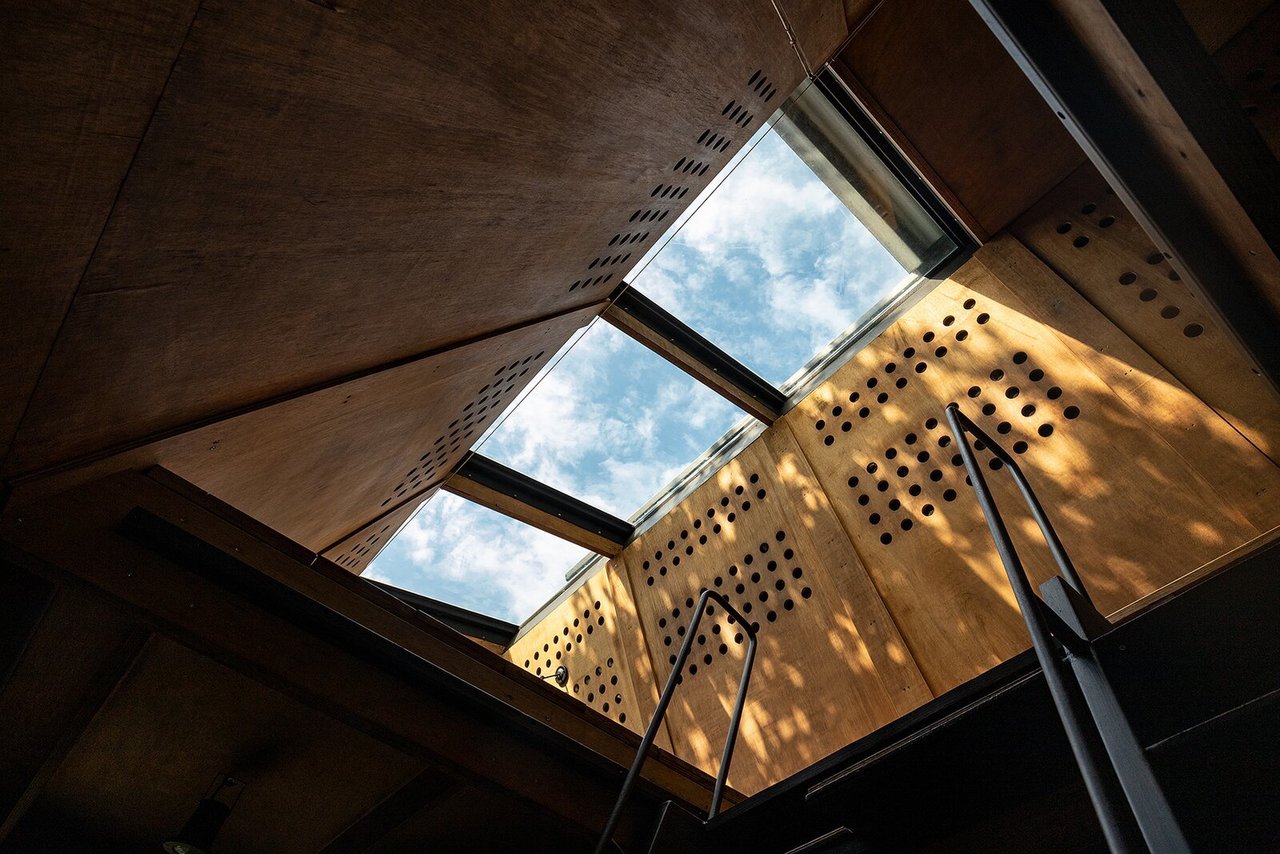 The outer layer of the roof slides open, revealing a glass ceiling that lets in sunlight and frames views of the sky.

In Quechua (the language spoken by Indigenous populations in the Peruvian Andes), "huaira" means wind. It’s a befitting name for a home treads so lightly on the land. "Huaira is the sum of multiple simple processes that solve a great complexity," Mera says. "It’s low-cost, replicable, scalable, modular, expandable, and adaptable to multiple weather conditions." And for Salvador, Huaira Cabin is as tranquil as it is dynamic. "The purpose was to create a continuous experiment that connects to the environment," she says. "It sounds a little bit romantic, but sadly, only a few people know how beneficial nature can be." 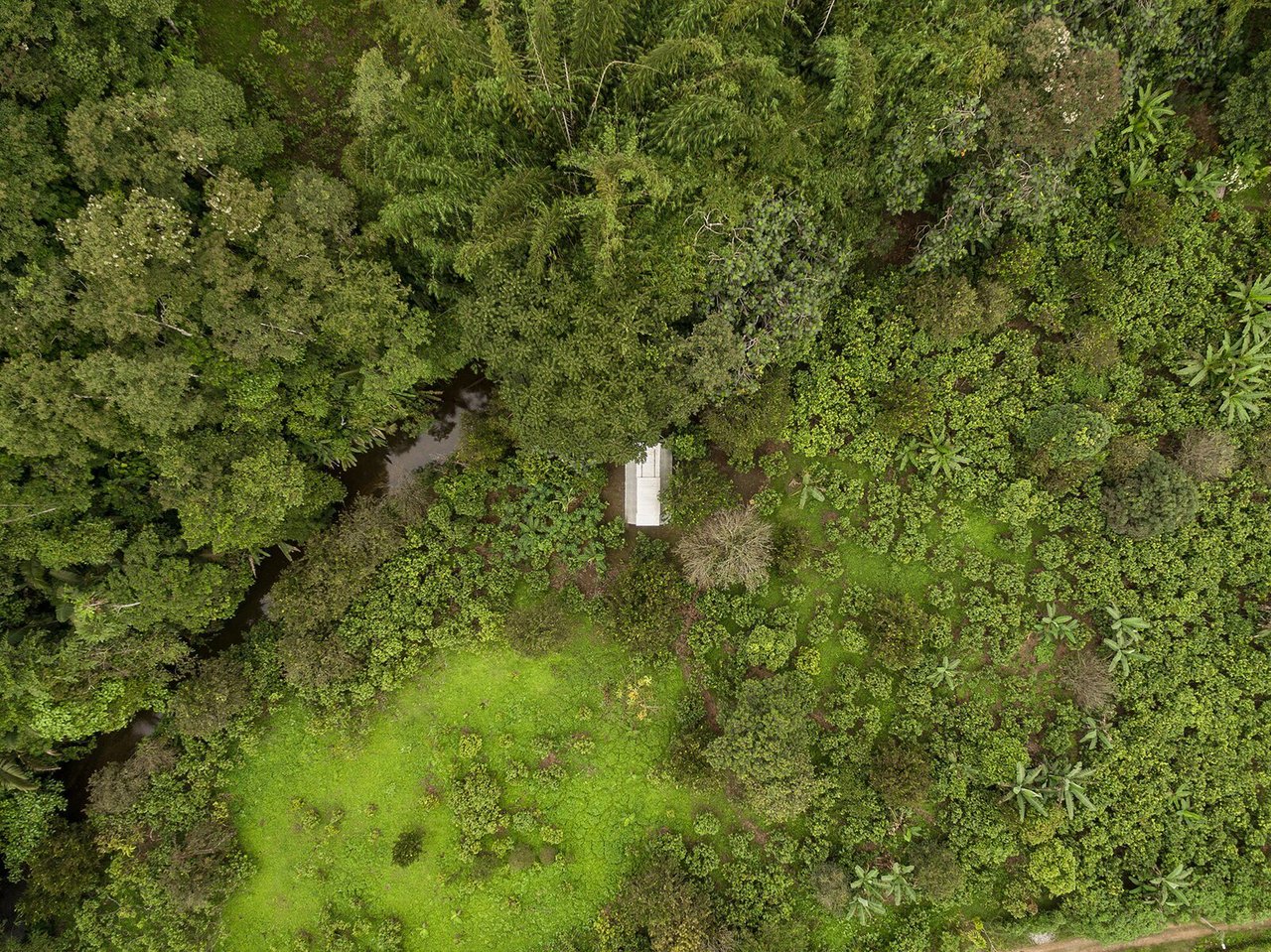 Lush vegetation and a small river mark the natural landscape that surrounds the cabin.