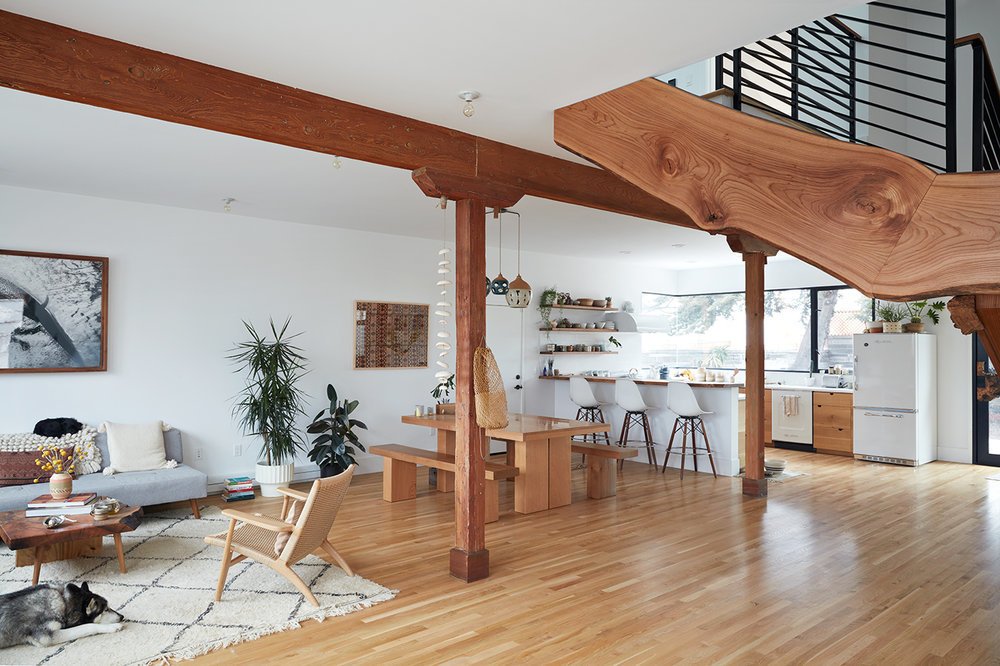 Honing in on the meditative surfing vibes of the ocean, what was once an old horse barn is transformed into a seaside haven, equipped with subtle accents brimming with maritime lore.

Round windows and large, sweeping glass doors swing open to let in the salty sea breeze. Minimalist wood accents-cedar, redwood, oak, elm, white oak, and ipe-permeate the entirety of the Great Highway Project, deliberately selected to express a connection to the landscape and the ocean. 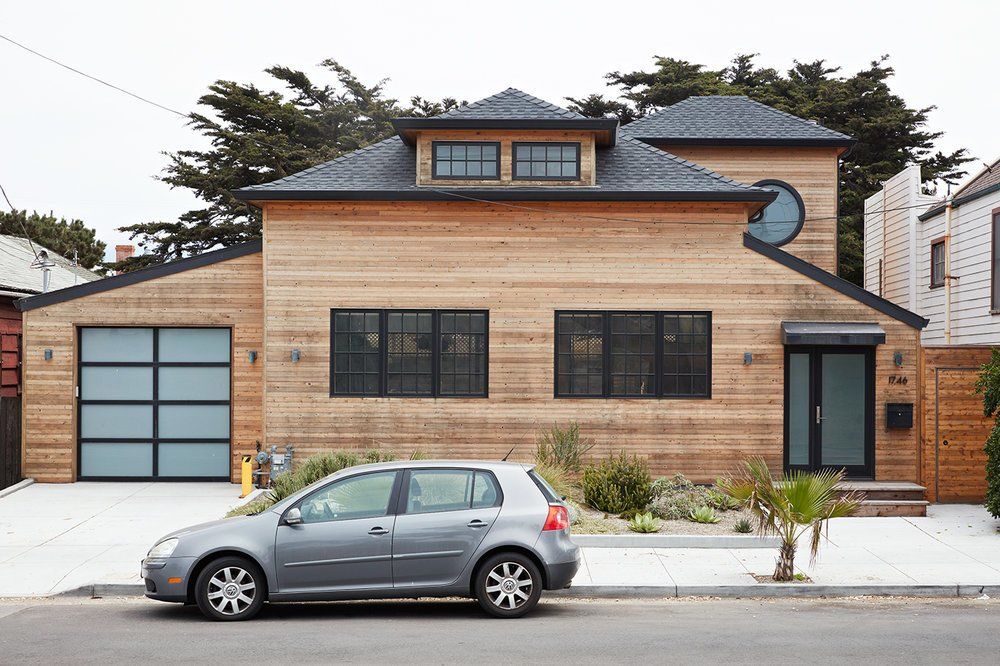 These elements are the signature style of designer Mason St. Peter, whose work can be found in San Francisco's beachside neighborhoods such as Outer Sunset and Venice Beach. He is the man behind projects like the General Store, and his very own Topanga Canyon home with his wife-cool-girl Serena Mitnik-Miller, artist and owner of the General Store-and their son Wild. 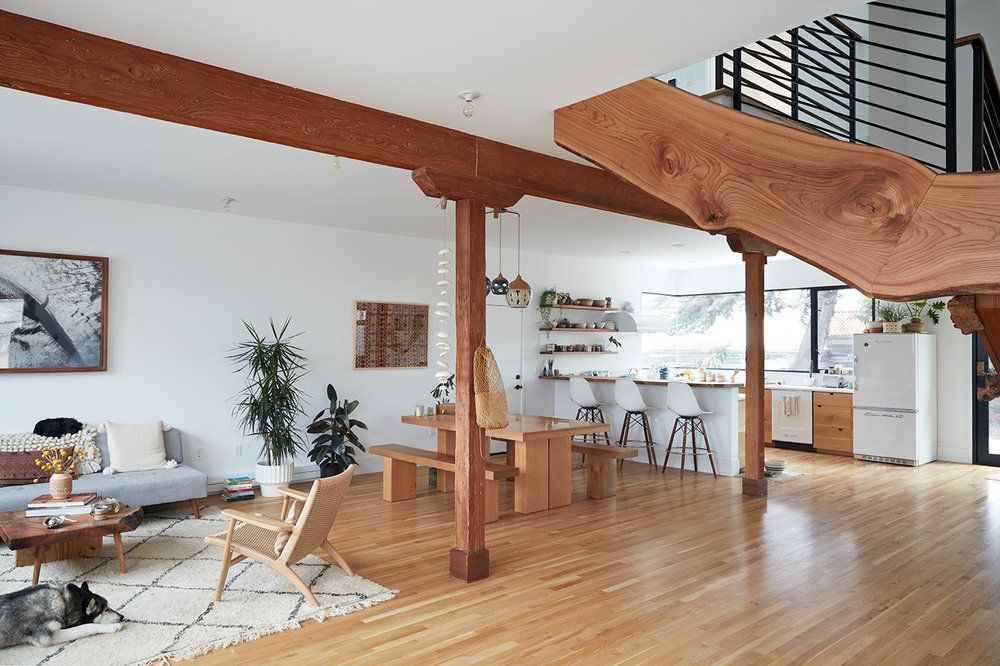 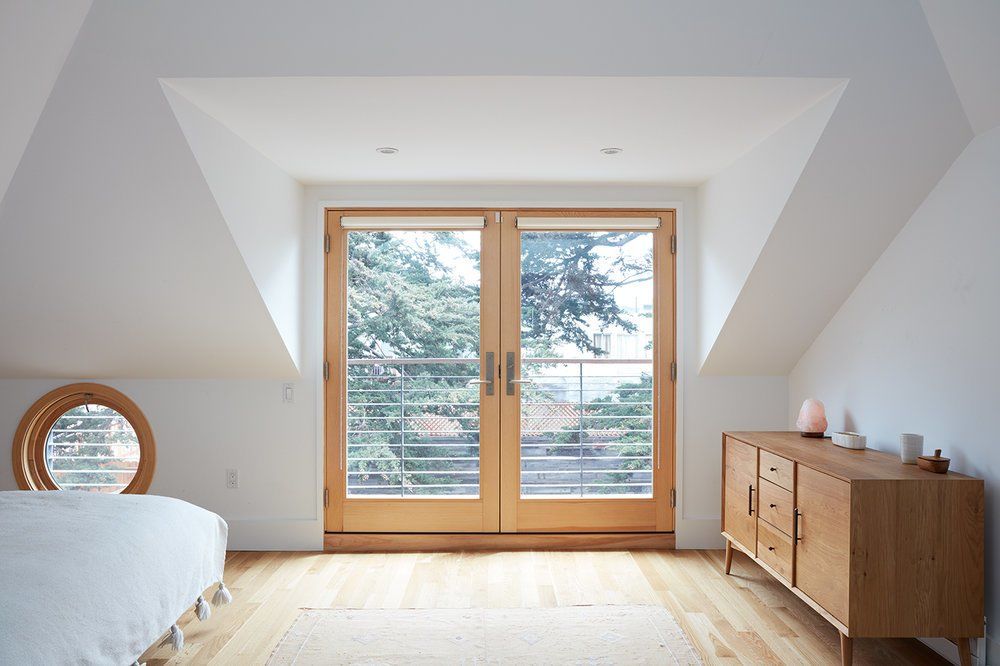 Peter flows from one project to the next. With an emphasis on depth and functionality, his creations have a spiritual aspect, honing in with almost divine lucidity. As a surfer, it makes sense-he is constantly tuning in with the sea and the connection to a greater, centrifugal force. He sires balance in his designs, and he is a light seeker. In a new space, he automatically looks for where the sun breaks through and explains that bringing or keeping light in is a perpetual driver for space creation. After finding a light source, he blends soothing aspects-some sharp, some soft-to hatch harmony.

This is how a 5,000-square-foot lot and 2,000-square-foot home were transformed from a dark, leaky space into the light-filled sanctuary known as the Great Highway Project. The project landed in his lap when an old friend of his wife was searching for a home closer to the beach. He, too, is a surfer who was looking to leave his loft in SoMa for a place more accessible to the swell. Peter stepped in.

His vision for the space was "to bring in the light and add an intentional connection to the rear yard," he says. Additionally, he wanted to "open up the front yard to the ocean and dunes and to privatize the rear yard with a boundary by adding the garage." 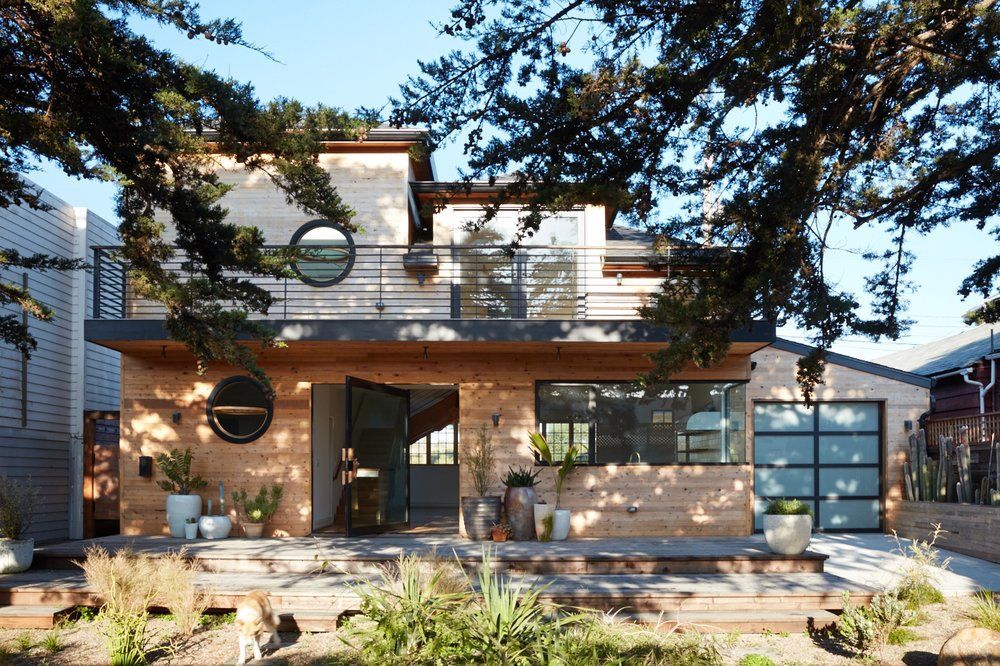 From there, the entire three-bed, two-bath house was enhanced from foundation to roof-an extensive structural upgrade. All new exterior siding and interior finishes were applied. A bathroom was added and the upper deck legalized with a new code-compliant, sculptural stair element. The entry and rear yard areas were formalized; and kitchen, bath, and service areas were remodeled. Peter also added a deck and many skylights.

"The main spaces existed; we just unified them with intention and careful attention to direction and flow. Upstairs was an open, low-ceiling room that we divided into two bedrooms and added a nice large bathroom for comfort and relaxation," he says. 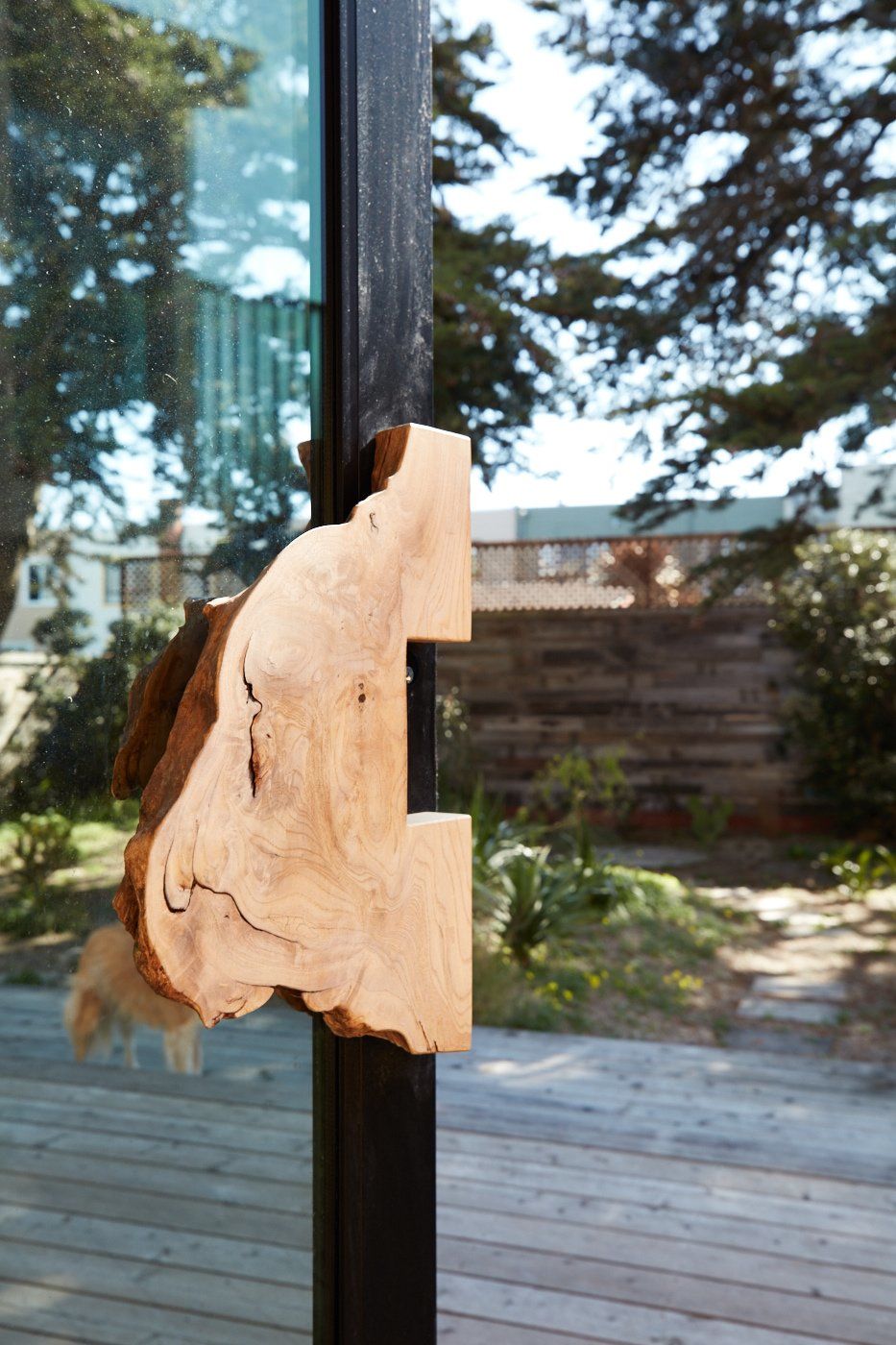 The home is saturated with thoughtful design elements. Large, sweeping glass windows and doors allow natural light to flood the space. To add balance, live-edge handles grace the edges of the doors. Says Peter, "I wanted something soft and organic to diffuse the rigidity of the 8-foot square pivot door and the modern tubular bar pull that was provided."

In Peter’s usual muted palette, there lies an anomaly in this project-a pop of crystalline azure juxtaposed against the otherwise alabaster-hued abode. The tiles in the entryway and bathroom flaunt a cerulean geometric design that exudes a playful elegance, evocative of a Moroccan influence. He divulges that it is something he’d like to be able to incorporate more. "I love the tile I chose for this space and would have it in every project if I could. Fortunately for me, the client agreed," he says. 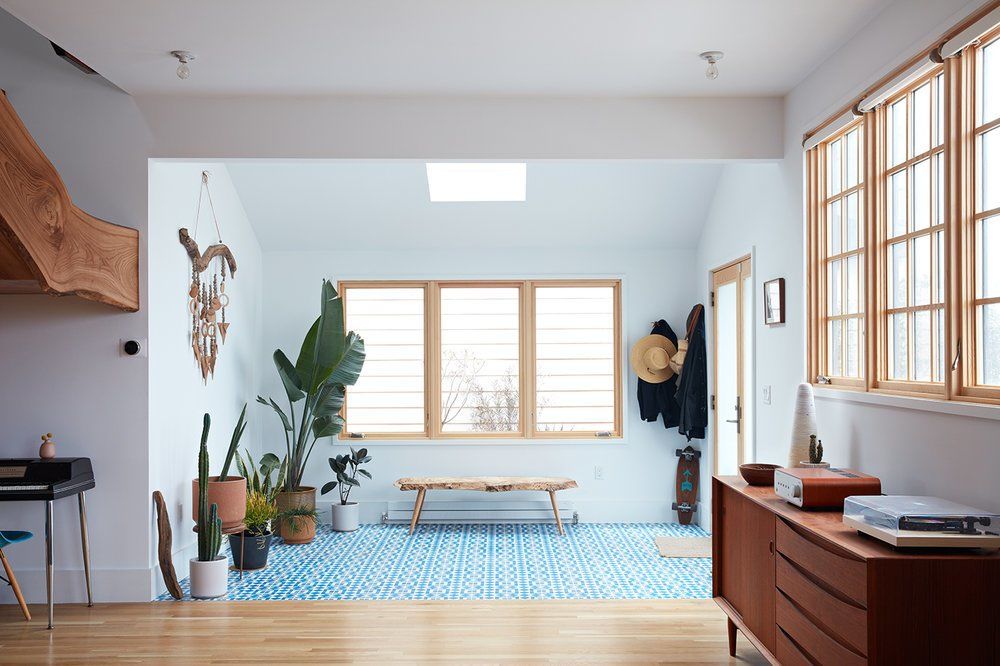 Of the entire dwelling, there is a single, striking element that emerges-that Peter admits is his favorite-the ergonomic, live-edge staircase: "The house had an existing spiral stair that was very tight and very dangerous-the owner was six-foot plus. We played around with locations that were contingent upon entry, but once we had our entry, the stair needed to be where it is now. I wanted a threshold that exposed the sculptural element that would provide access to the upper level. With all projects, this element is a true collaborative work with input from the builder, the structural engineer, and the wood worker to bring my vision to fruition." 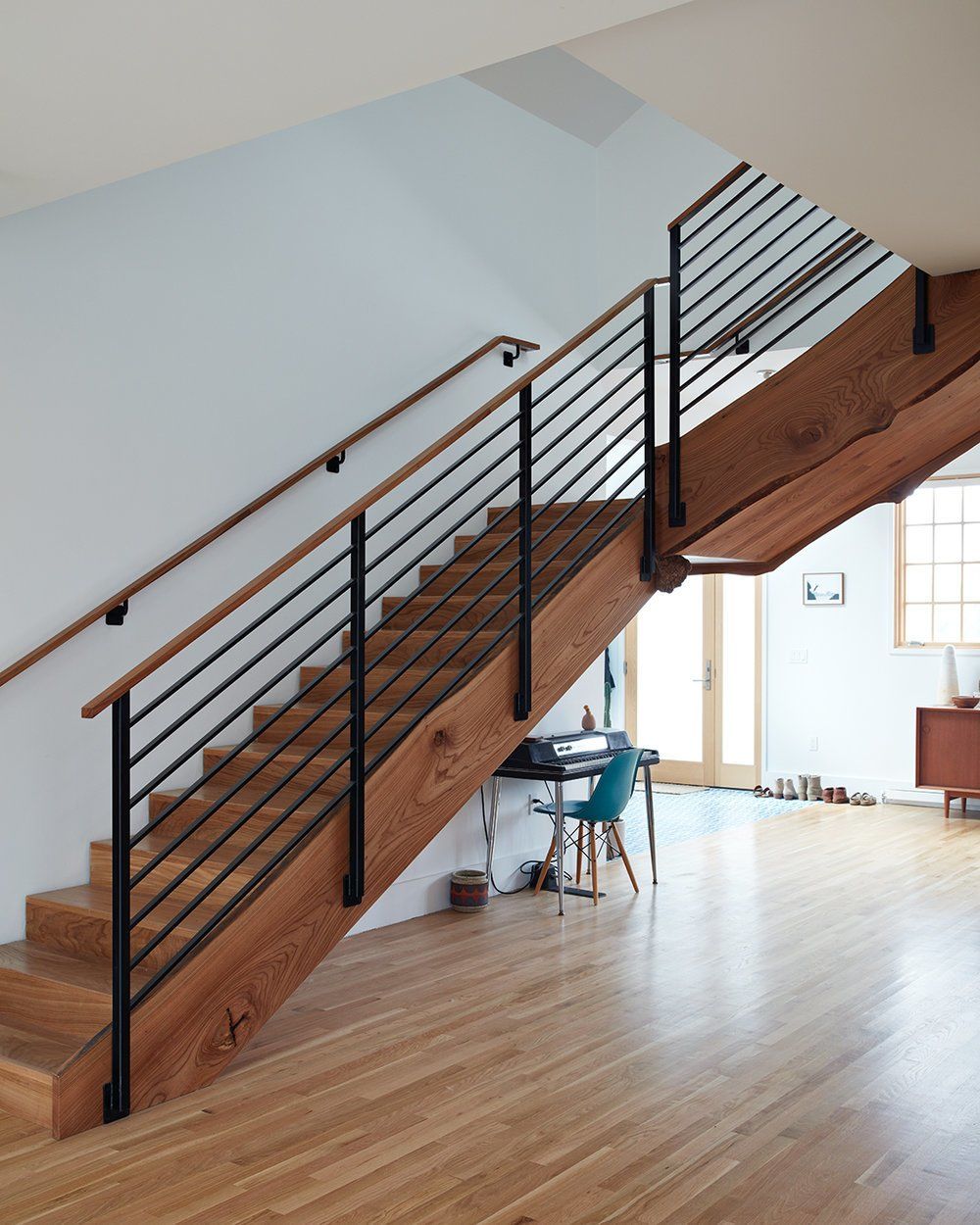 Designed to serve as a reminder of being ocean-side for its seafaring owner, Peter designed the space with elements that welcomed the outdoors; a key component are the circular windows.

"The house is on The Great Highway, adjacent to the sea," he says. "A maritime tradition of ocular openings seemed fitting to engage."