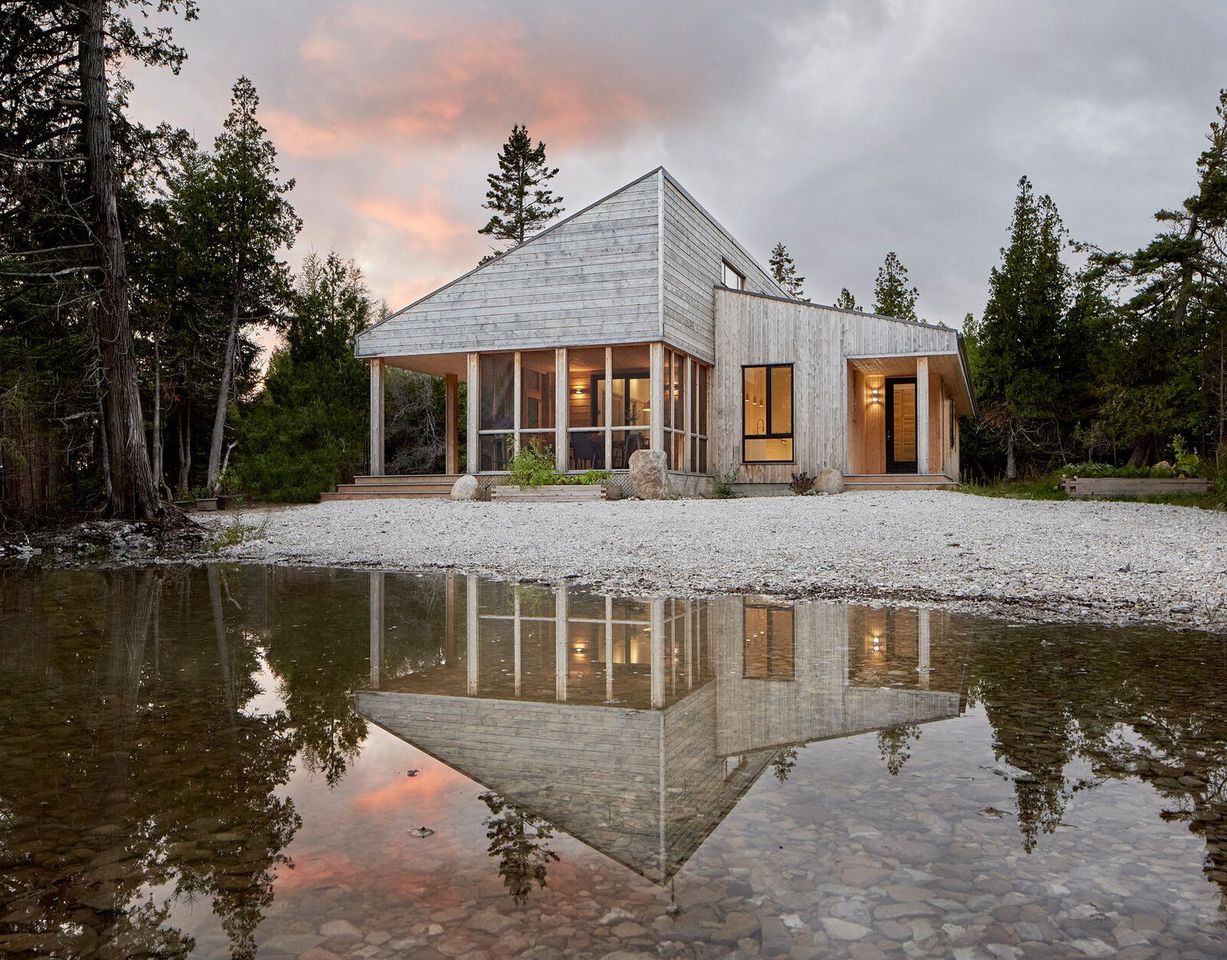 After escaping over the years to Lake Huron’s Manitoulin Island, a pair of painters tap Solares Architecture for a sustainable pine-clad cabin.

It turns out paradise is just a six-hour drive from Torontoขat least that’s how Donna Creed and Oliver Girling see it. When the couple first visited friends on Lake Huron’s Manitoulin Island 15 years ago, they stumbled upon dramatic water views, spectacular stars against a dark sky, and peace and serenity among a forest of cedars. Immediately, it felt like something special; it felt like home away from home.

Soon after that visit, they snapped up a property of their own and spent the following years escaping the city to camp out on the land. Later, they upgraded to bunkies to make stays a little cozier. But with retirement drawing near, the couple, both teachers and avid painters, started to wonder if it was time to upgrade their island accommodations. They weren’t asking for much: "We just thought having a place to cook indoors and running water might be nice," laughs Oliver.

Solares Architecture, a Toronto-based firm reputed for their eco-conscious designs, helped them dream a bit bigger: The Manitoulin property now boasts a gorgeous 1,500-square-foot beachfront cabin that blends with the wilderness. 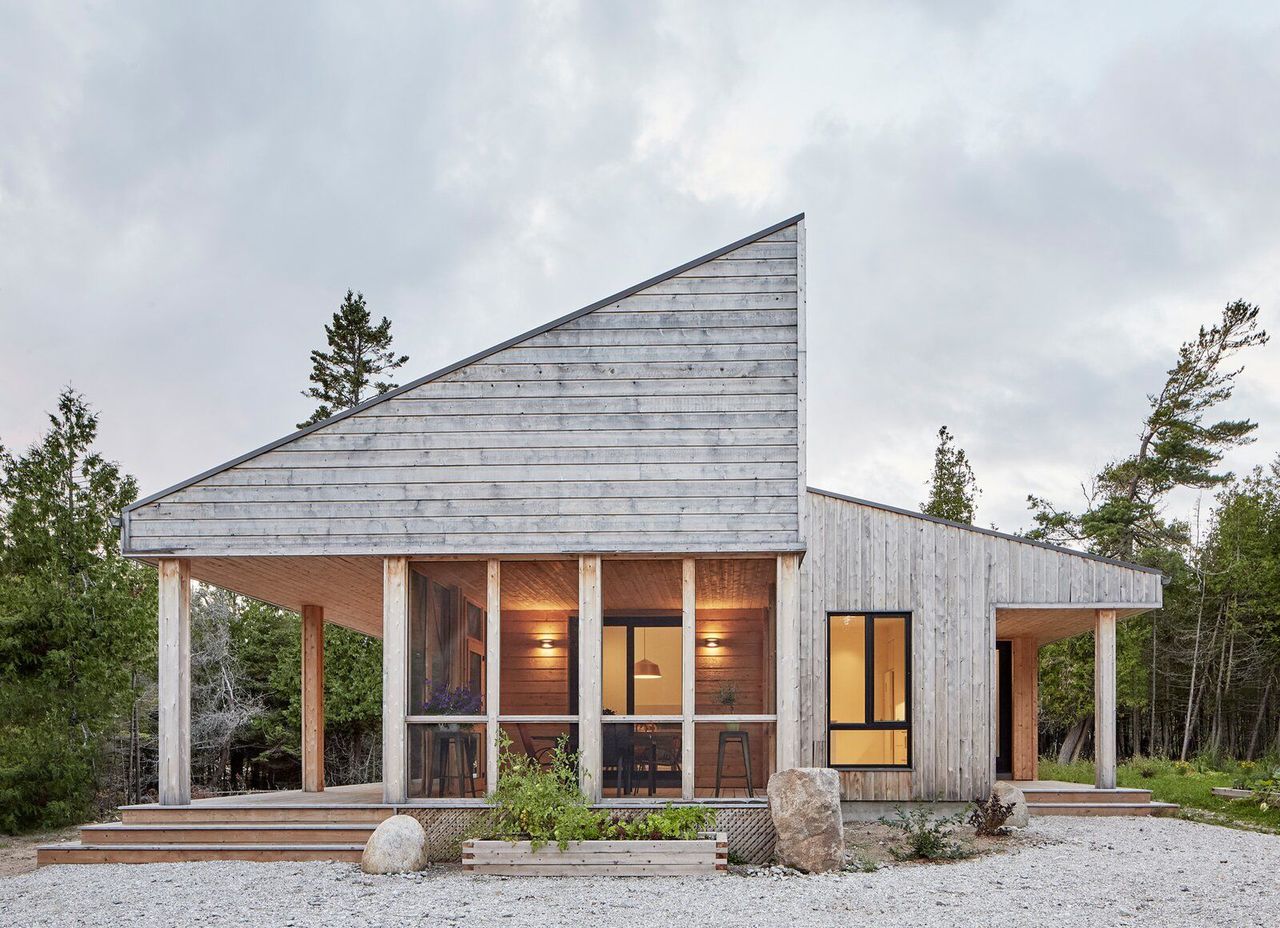 The roof is made of steel sheet metal, another sustainable choice. "Two generations from now, whoever wants to replace the roof can just recycle it," says Lolley. 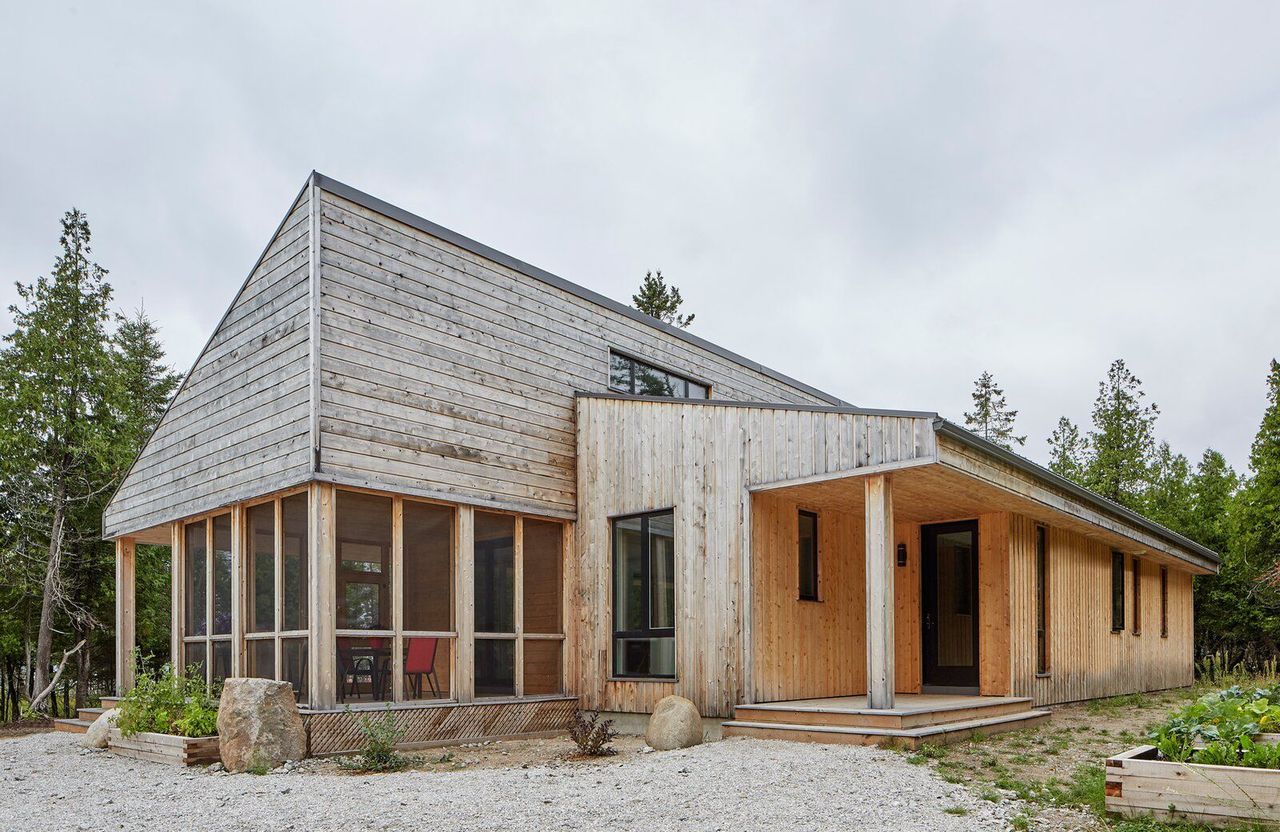 Plans for a separate artist’s studio on the property are currently in the works.

Since the remote island didn’t have infrastructure to provide gas or electricity, going off-grid was a more a necessity than a choice. But the team at Solares, which specializes in solving for arrangements like these, had plenty of tricks up its sleeve.

Solar panels collect energy daily for the beachfront home, and backup power is provided by a propane generator and batteries. "It’s tough to fully survive on solar in Canada," explains supervising architect Christine Lolley. "When people say off-grid, they really mean off the hydro grid. You’re pretty much always on the fossil-fuel grid in this country." An airtight envelope and high-quality insulation work double time to make sure no energy goes to waste. "It's kind of like the equivalent of buying a really really nice big parka," says Lolley, "but also making sure you zip it up." The office and studio doubles as a guest room for those who make the trek out. 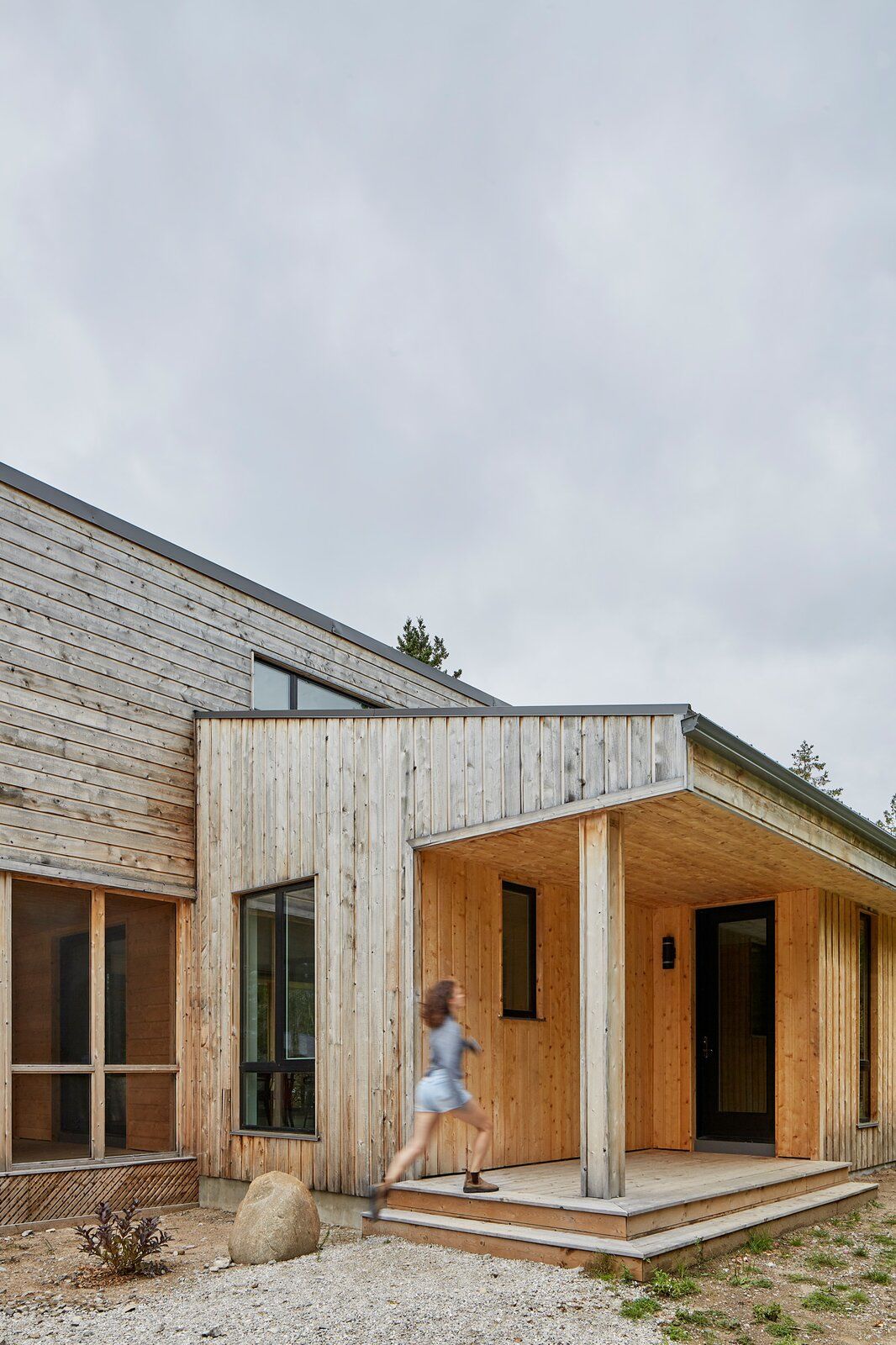 The home is a huge step up from the handmade bunkies that used to exist on the property. "We were basically glamping," says Donna.

As painters, allowing natural light to pour into the space was critical for Donna and Oliver. High-efficiency windows provide plenty of daylight, and views of the stars at night. "We just follow the light all day," says Donna. "You actually notice the shifting of the solar system through the year."

By implementing clerestory windows in the living room, the area below on the tall walls could be used for hanging the couple’s completed pieces. "We bought a scaffold to put artwork up," says Oliver. 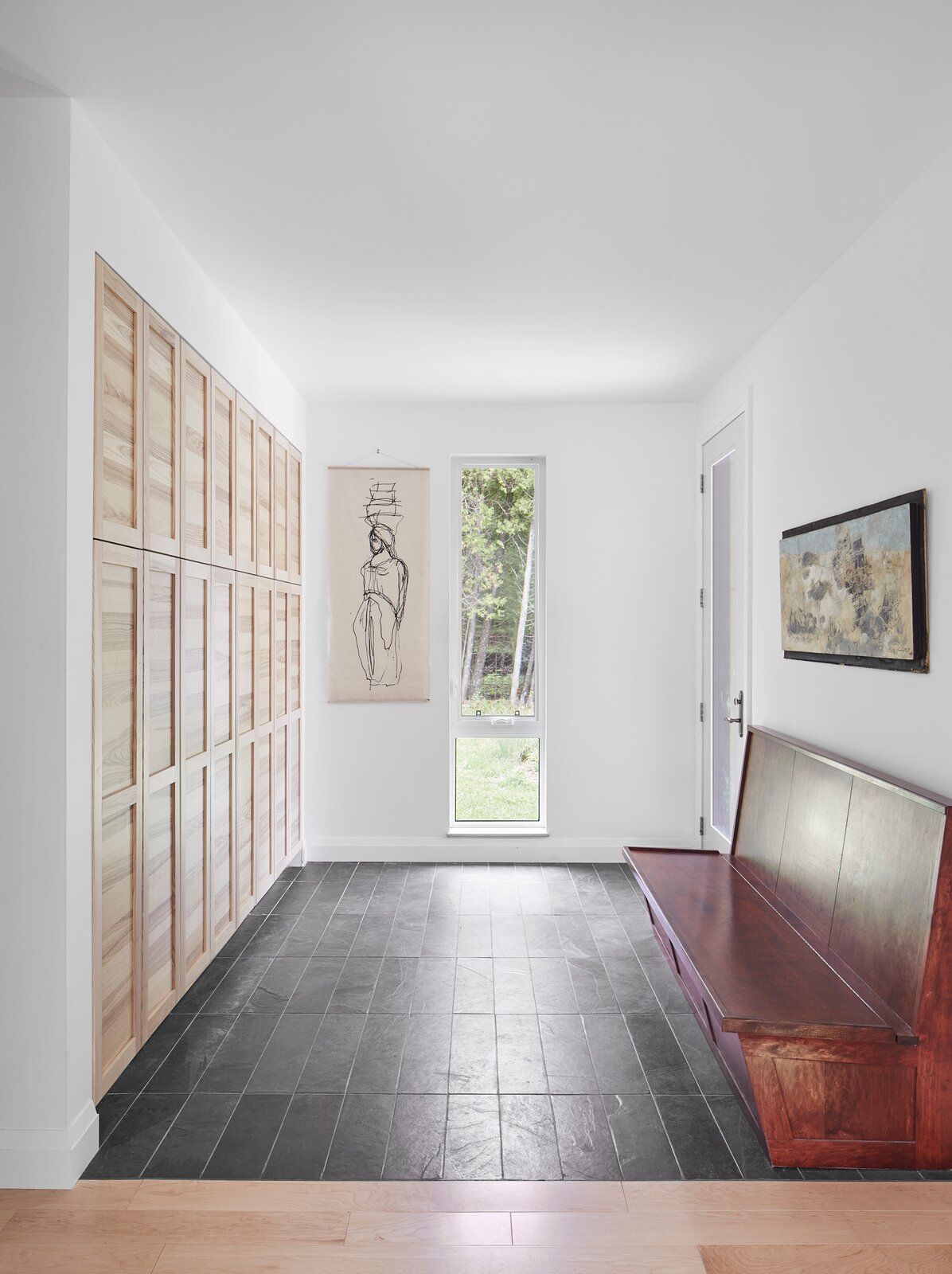 IKEA Pax cupboards with birch panel doors are banked in the entryway. A carpenter friend made the bench; another friend painted it. The dark slate flooring contrasts with maple floors throughout the rest of the home. 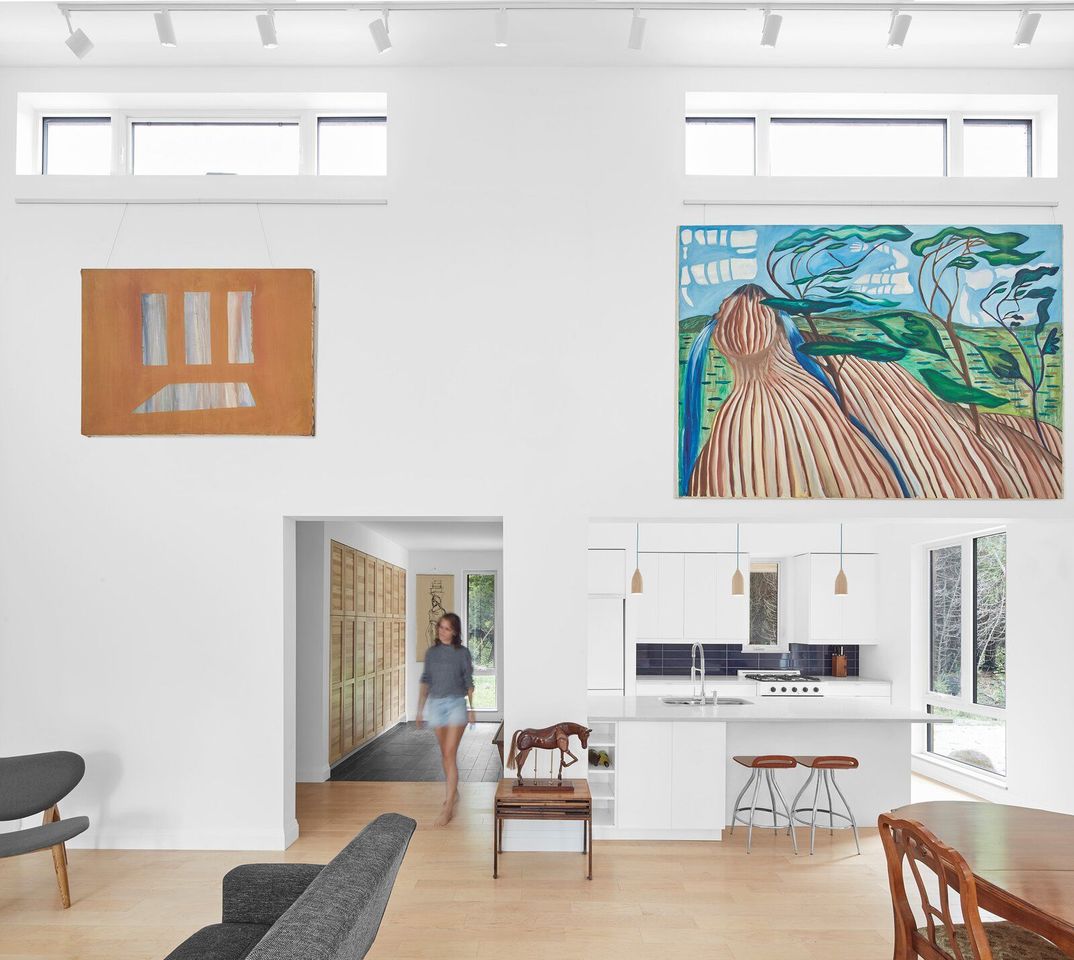 Most materials were sourced from local hardware stores, with all of the wood siding coming from a nearby mill. The high-performance windows, which came from Toronto, were a major exception. The cabinetry is from IKEA. The white walls act as the perfect gallery space for the couple's works. "The walls are a bit of an odd proportion because the ceiling is so tall, but I think there’s kind of a beauty in that oddness," says Lolley.

With so much sunlight coming through the southwest-facing windows during the summer months, the home can get a little toasty. To escape the heat, lead architect Elise Snyder designed a huge porch facing the lake to create a shady, breezy space. "You’re either physically outside on the ground, or you’re physically outside on one of the porches, or you’re inside and you’re looking out," says Lolley. For the couple, paradise is there at every turn. 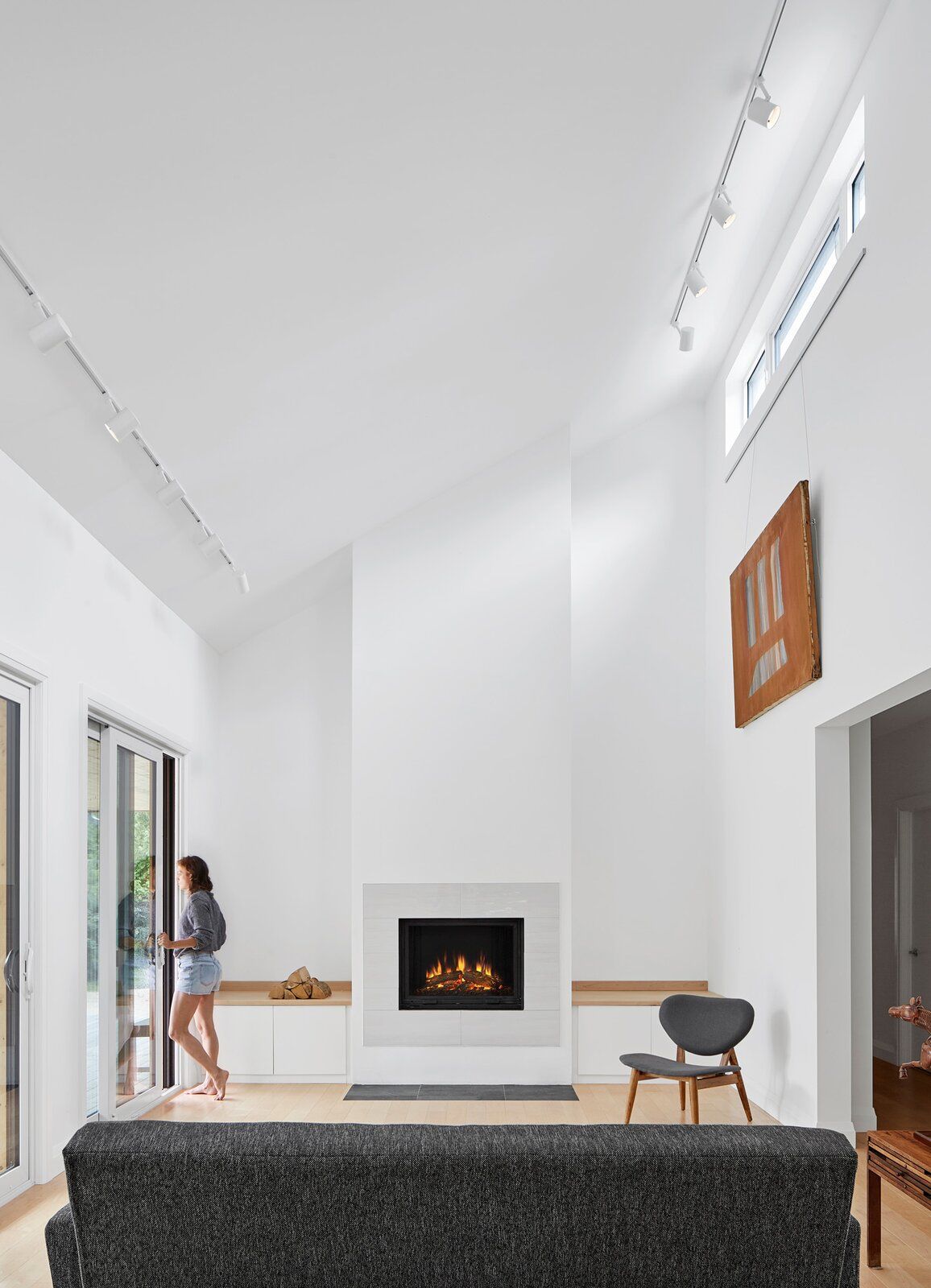 "At first we thought the fireplace was going to be too big… but now I think it’s just fabulous," says Donna. The bathroom floor is equipped with radiant heating and finished in grey porcelain. A cedar wall adds warmth to the space. 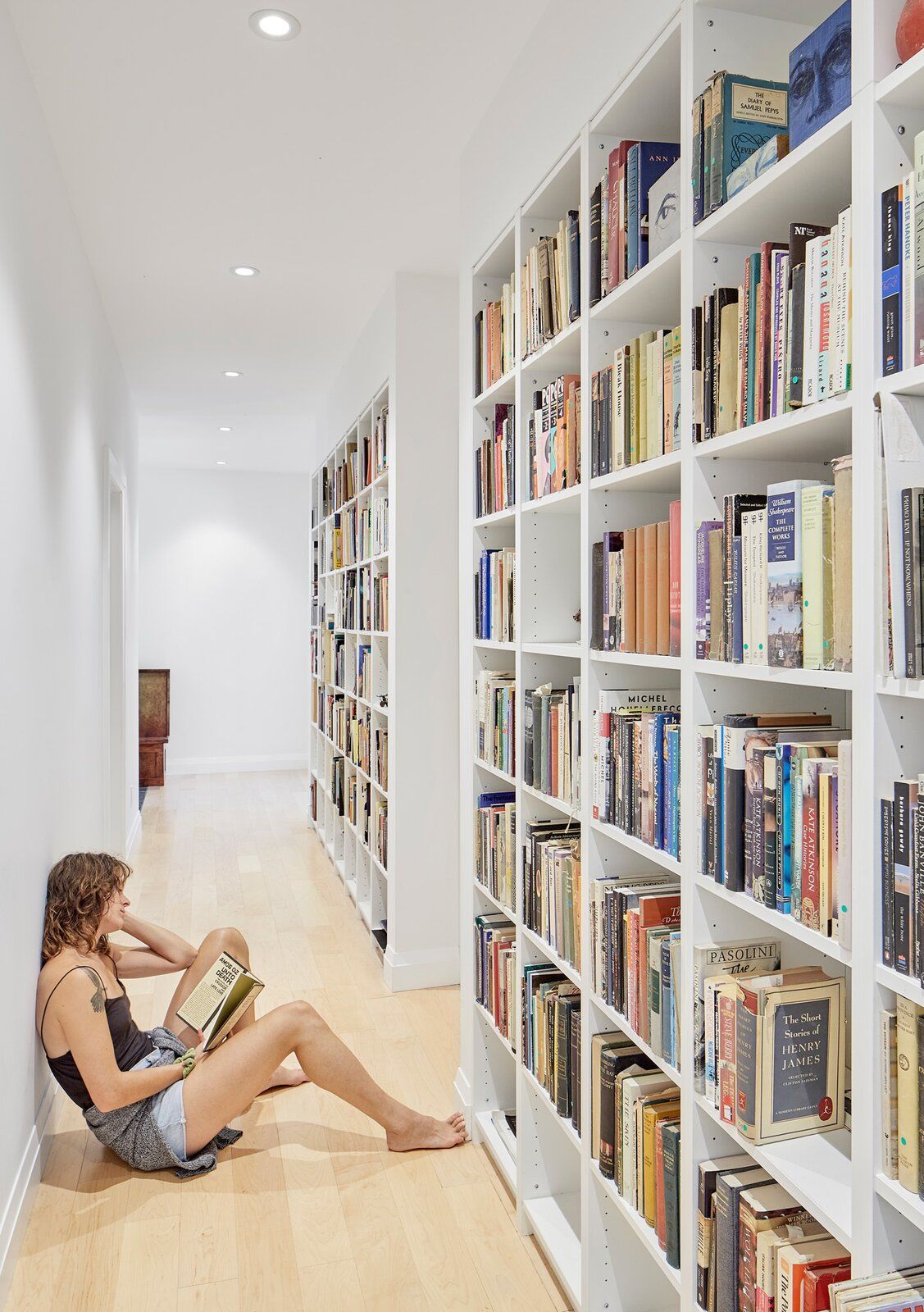 The couple are avid readers; a hallway of shelving is now home to their ample book collection. "As we walk by, we catch a glimpse of something we haven’t read in 30 years," says Donna, "or something we’ve never read at all." 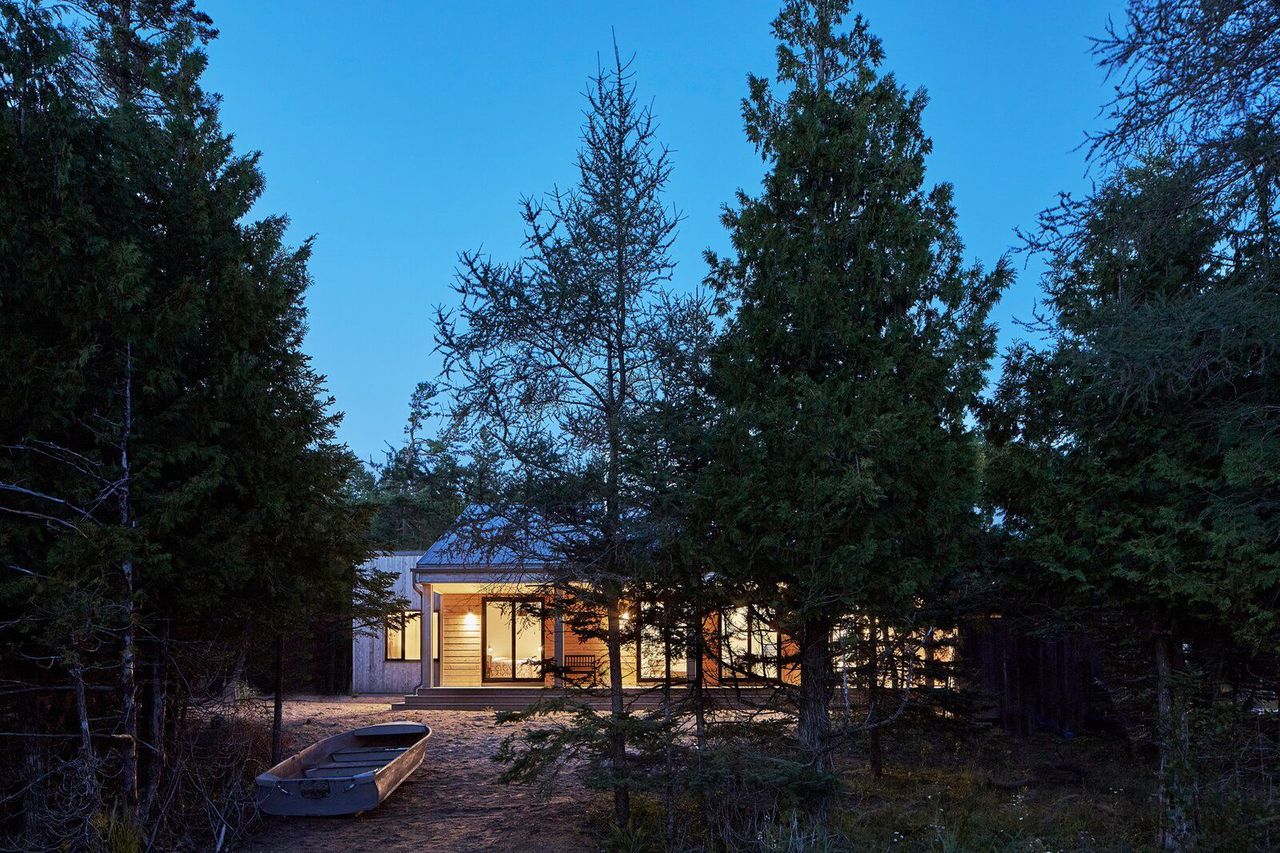 While designing the home, project lead Elise Snyder and another Solares staff member stayed overnight on the property to get a sense of the landscape. "It had an old-fashioned logging camp feel to it," says Snyder. 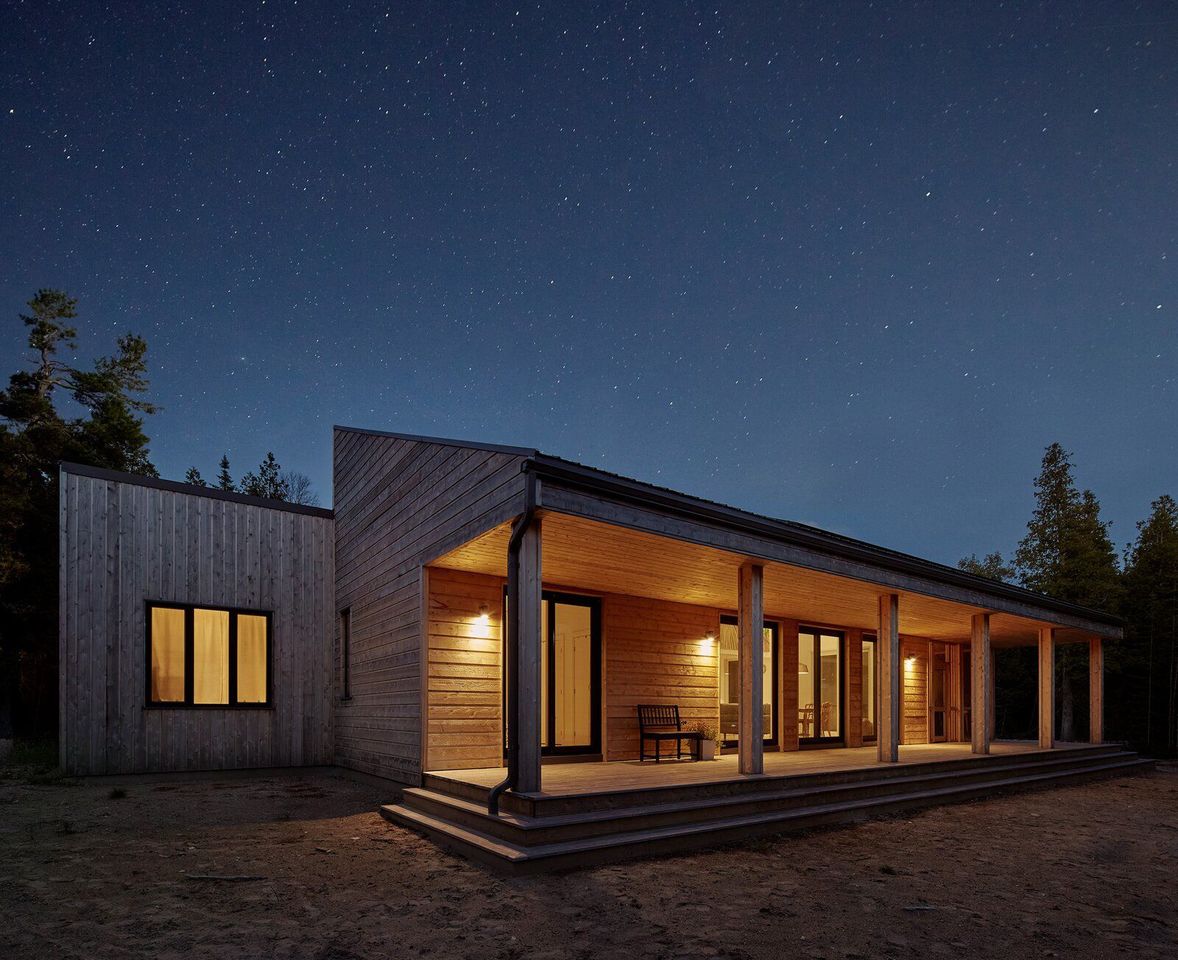 The remote location offers incredible views of the stars.