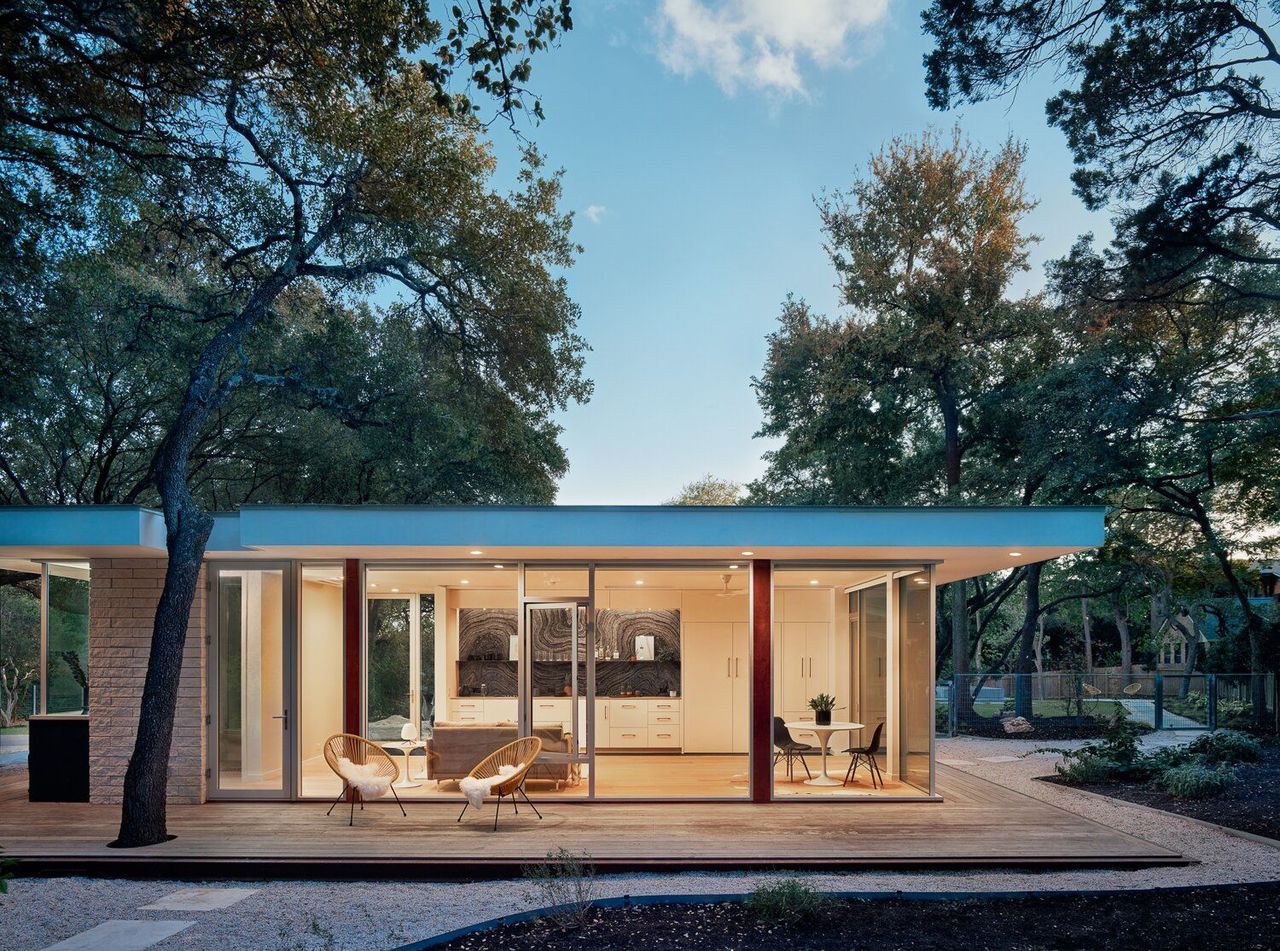 This ADU in Texas Looks Like a Miniature Midcentury

The glass-and-limestone structure by Matt Garcia Design evokes the heyday of modernism, and provides an elegant stay for an Austin musician’s visiting friends.

When it comes to building an accessory dwelling unit (ADU) in Austin, Texas, it’s possible to go big. To accompany a client’s existing 1960s ranch-style home, designer Matt Garcia could have maxed out the ADU’s size to Austin’s allowable limit of 1,100 square feet-but that didn’t feel right. "The challenge was to keep the scale appropriate to the existing house, to be really sensitive to the property," says Garcia. "I wanted to make an architectural statement, but not a loud one, and do something rigorous and thoughtful." 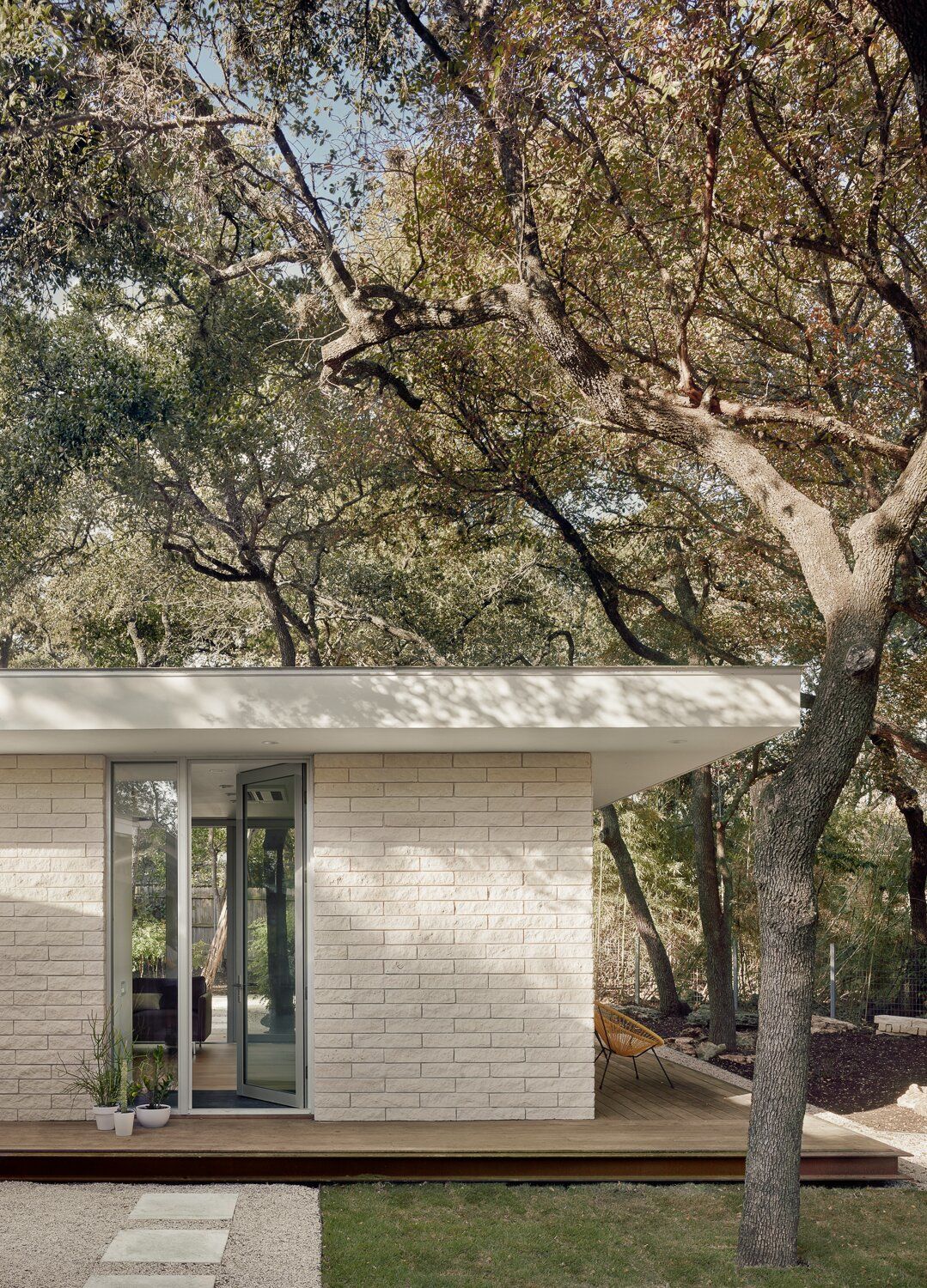 Designer Matt Garcia designed this 540-square-foot ADU to accompany a musician’s 1960s ranch-style home in Austin, Texas. Due to the size of the lot-about an acre-Garcia could have designed something twice as big. Instead, he accepted the challenge of keeping it small to achieve the right scale.

When siting the new building, Garcia had to preserve a lot of the mature oak trees where he wanted to build. "All of the trees on that side of the property were protected by the city of Austin, so we couldn’t touch them," he says. "So that was part of it, getting it nestled into that oak grove." A clever cutout in the ipe deck, mirrored in the roofline, is a gesture to that constraint.

For the interior, the goal was to give the client "a small footprint that someone could live in for about a week," says Garcia. "He’s really involved in the music scene in town and he wanted a spot for buddies to come and jam and have a place to stay during South by Southwest." Floor-to-ceiling glass melds the tiny building with its surroundings, while nine-foot-tall ceilings give the interiors a spacious feel. 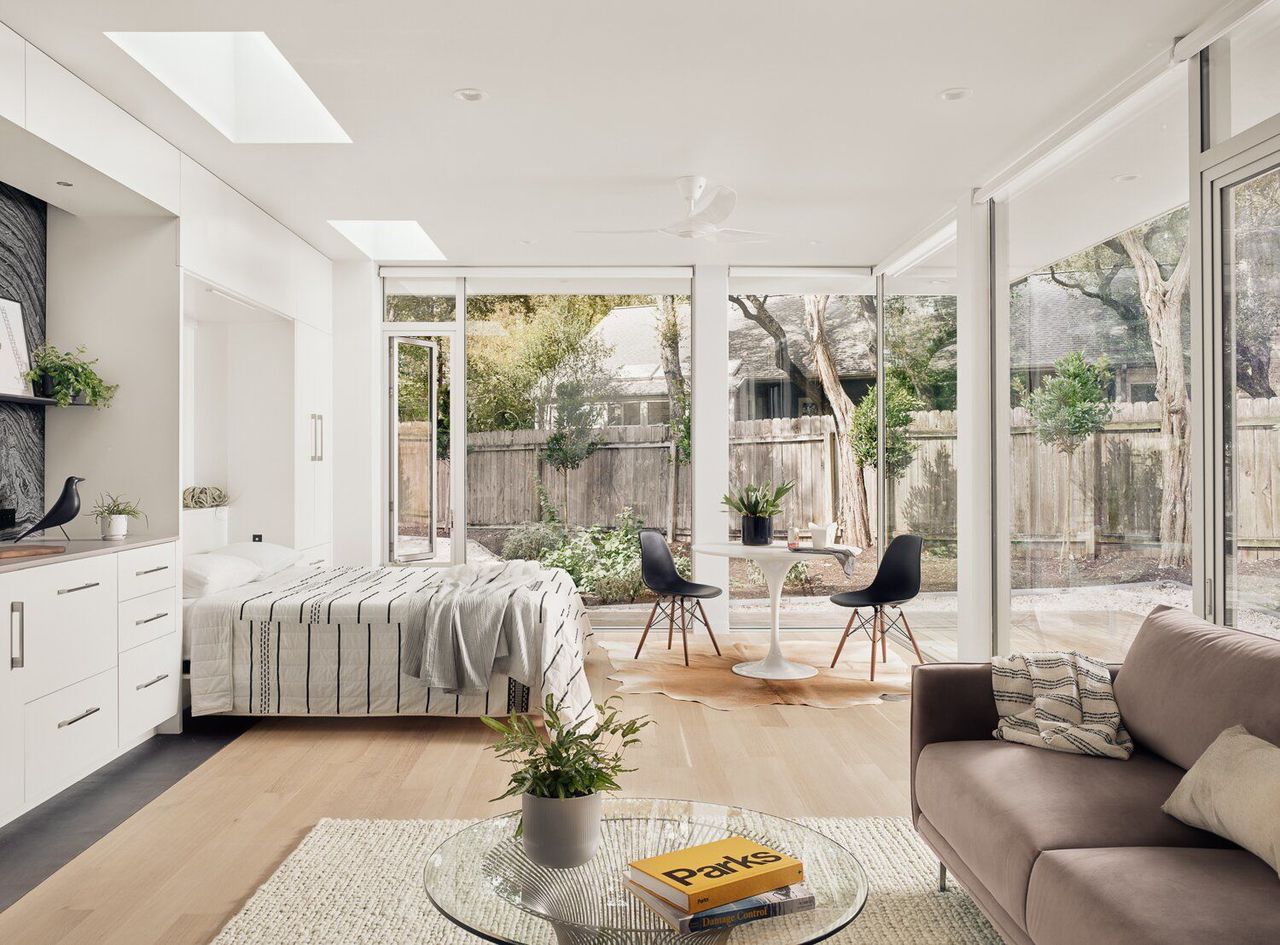 A Murphy bed folds down from the custom cabinetry, and folds up again to save space when not in use. A series of skylights flood the interior with natural light.

To that end, Garcia anchored the main room with a wall of custom cabinetry that features an integrated full kitchen and Murphy bed. The material palette was then considered as carefully as the building’s form. Garcia combined white walls and cabinets with rift-sawn white oak floors and blackened steel accents. The steel lines the floor in the kitchen and entry, and forms the shelf in the kitchen and a countertop outside the bathroom. 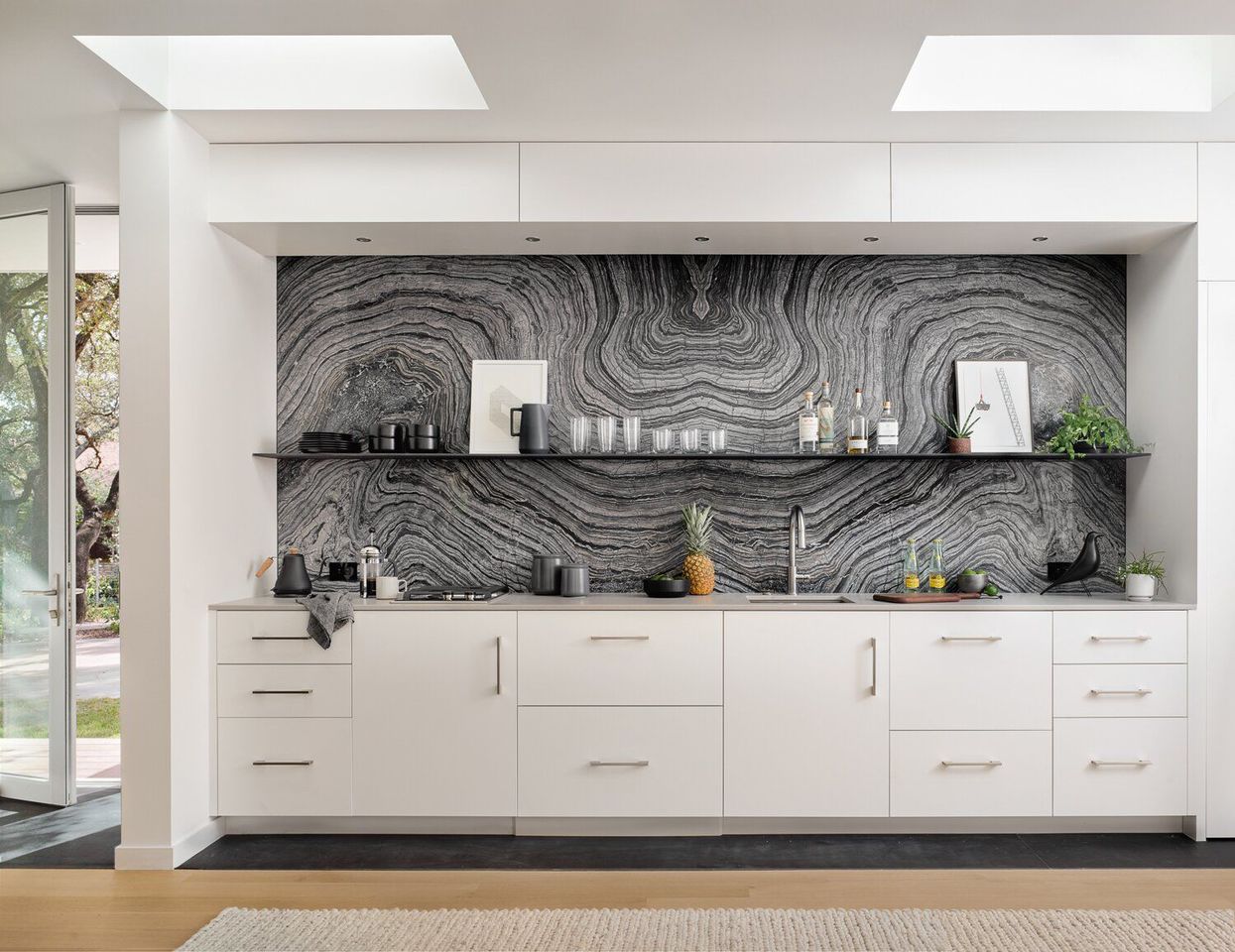 Garcia says people often comment that the ADU just needs a refrigerator and dishwasher, not realizing that both are seamlessly concealed in the cabinetry. "It’s actually a fully functioning kitchen," says Garcia. The kitchen includes a 15-inch Wolf cooktop, a Miele dishwasher drawer, and a Sub-Zero refrigerator drawer. The counter is by Caesarstone. 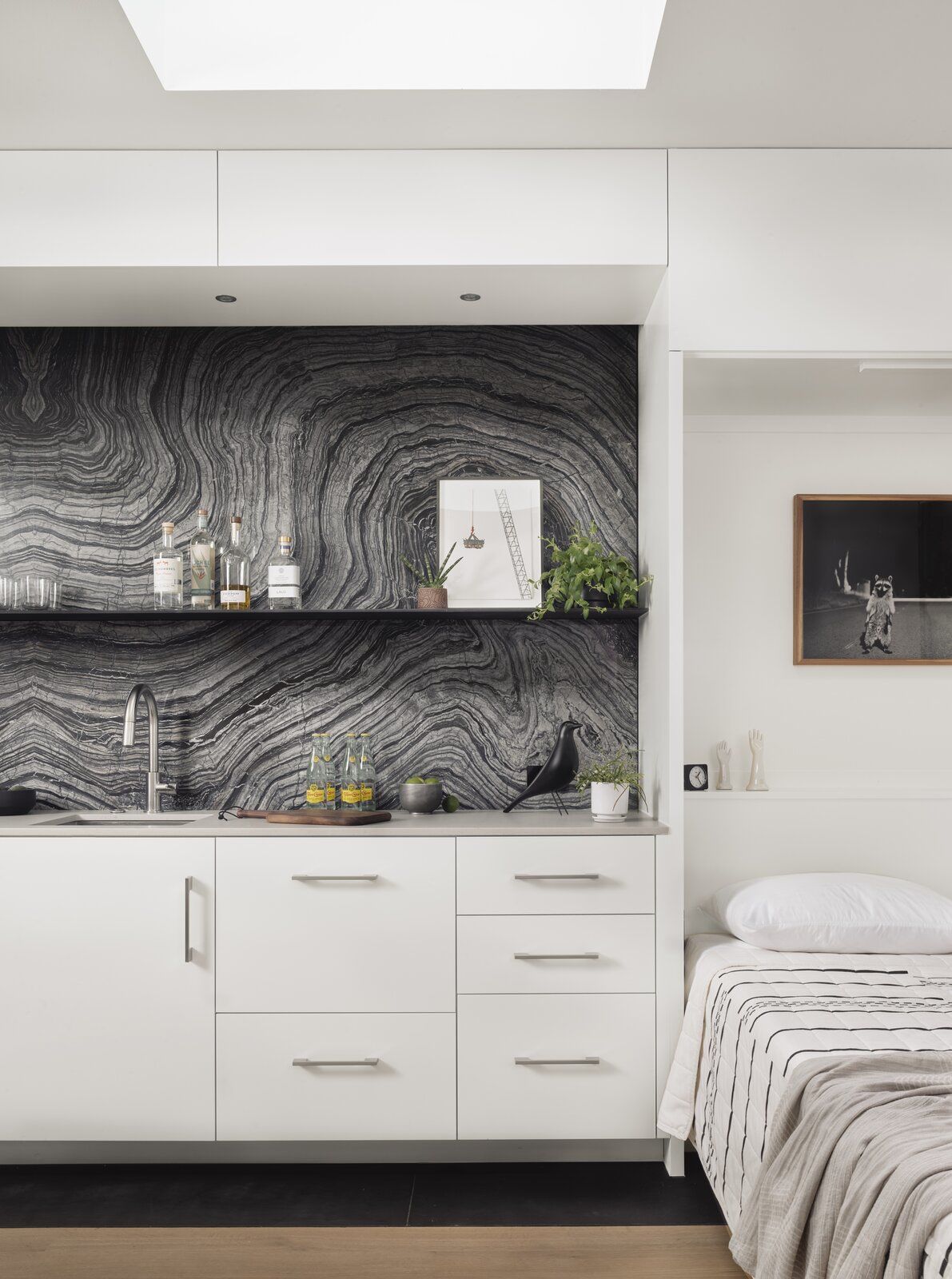 Garcia included a display space behind the Murphy bed so that it "creates a moment" when the bed is folded down.
Casey Dunnsed Lighting

The focal point of the main room is a backsplash composed of two perfectly aligned slabs of Kenya Black marble. "There’s a metallic sheen to the veining, so depending on the lighting, it can really change in a dramatic way," says Garcia. The bathroom is a counterpoint to the kitchen’s drama, with an all-white backdrop that reflects sun from the skylights above.

With floor-to-ceiling glass and decking that appears to hover over the gravel, the petite 540-square-foot ADU projects a sense of airiness. "The building just seems to float," says Garcia. Outside the bathroom, blackened steel makes for a shelf that’s ultra low profile; the use here echoes the rest of the steel throughout the ADU’s design. In the full bathroom, the floating vanity for the sink is from Caeserstone. The shower is covered in bright white three-by-twelve-inch ceramic tiles. The skylights provide ample light during the day. 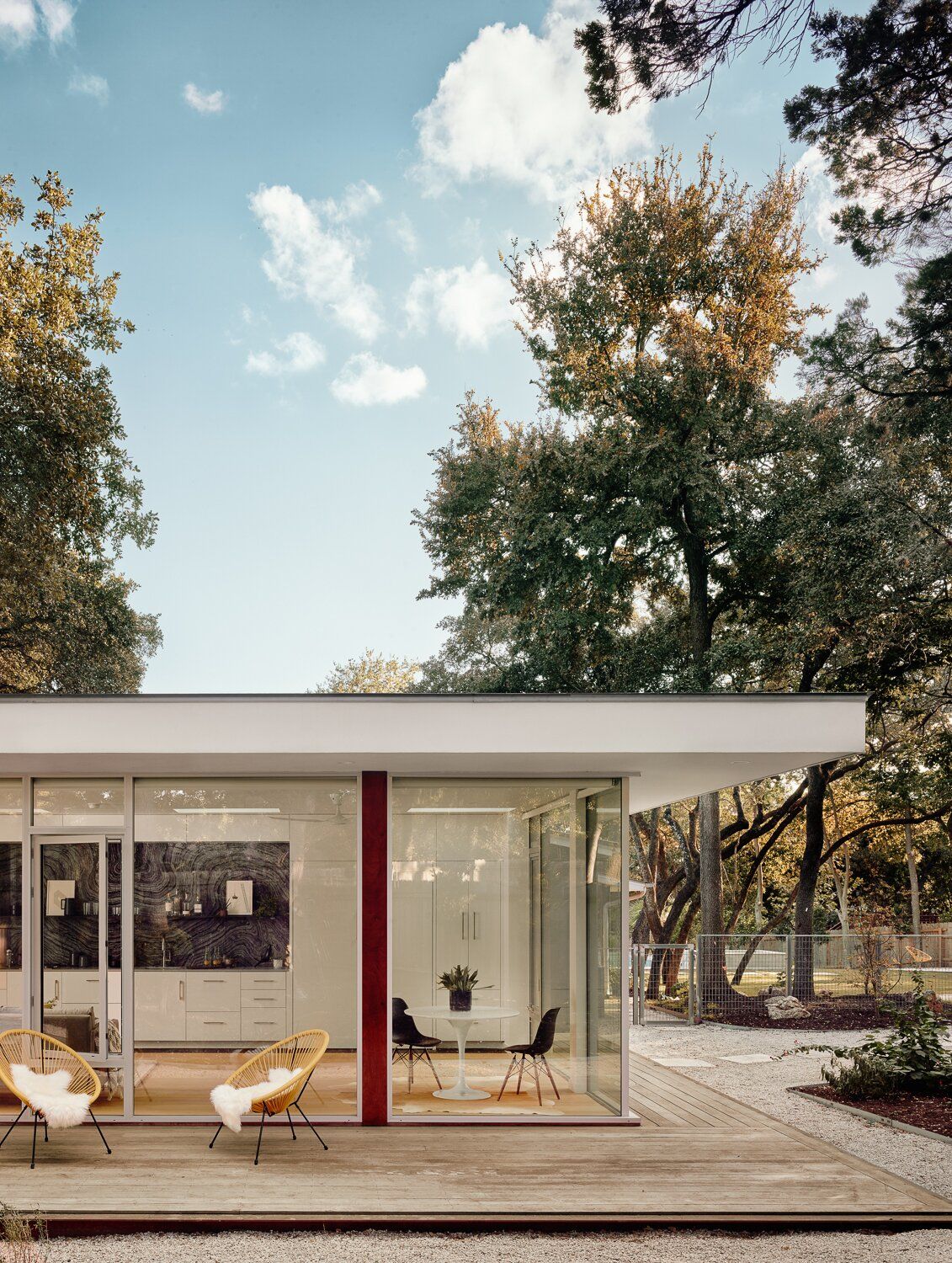 The strip between the glass panels, and the decking, is made of ipe. The vertical strip retains its original hue. The deck is wrapped in a steel channel that nods to the steel used inside.