Completed in six short months, ZeroCabin Krul is a self-sufficient getaway near the Andes mountains and the Patagonian fjords.

When the Krul sisters stumbled upon ZeroCabin’s low-impact, off-grid homes on Instagram, they jumped at the opportunity to build a self-sufficient retreat on their slice of paradise in Calbuco, Chile.

"They wanted to unplug from the rest of the world and live well with just the elements provided by nature," explains ZeroCabin founder Felipe Lüer. The sisters also sought to capitalize on the flexibility of remote work. "They wanted to work while looking at the sea but be as free as a bird during the week," Lüer says. 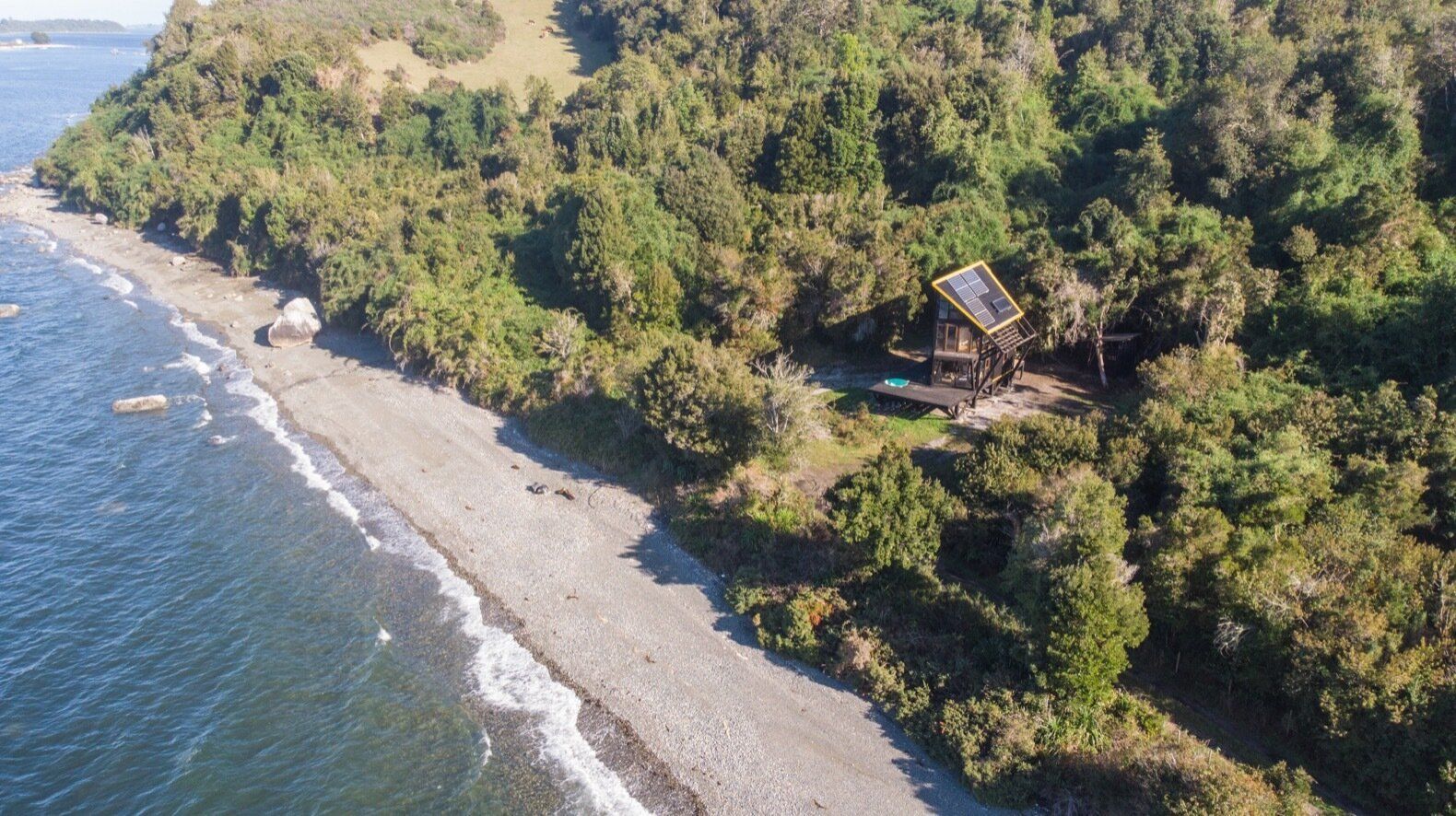 Located in a forest in southern Chile’s Lake District, ZeroCabin Krul faces an inlet of the Pacific Ocean. 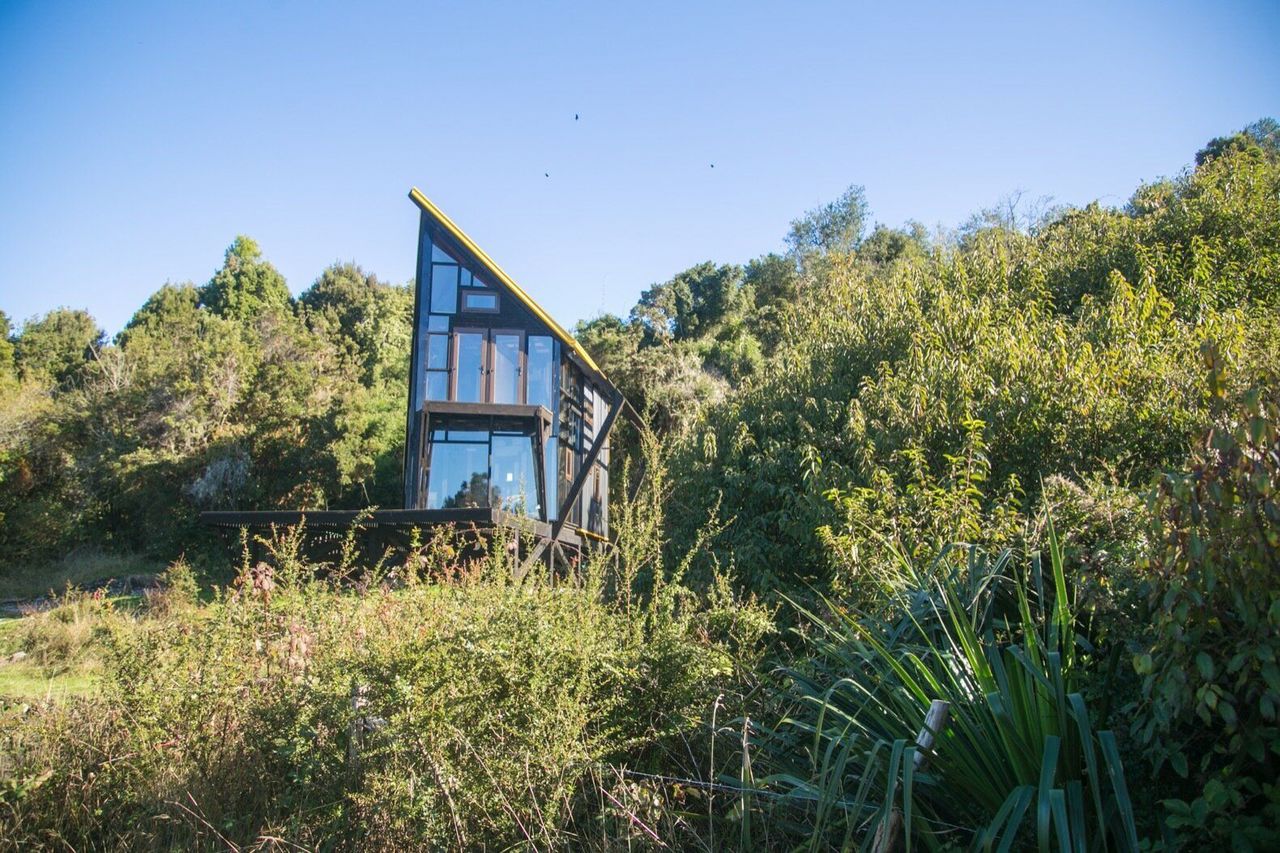 "The cabin’s shape is in humble dialogue with the surrounding nature," says Lüer, who collaborated on the final design with Alejandro Otero. "It is like a tree that only uses what is available to live."

Each ZeroCabin starts out as a kit of parts that is customized to client specifications and site conditions. Lüer’s team of Zerobuilders has thus far completed six cabins across Chile that are powered by renewable energy and sit lightly on the landscape. 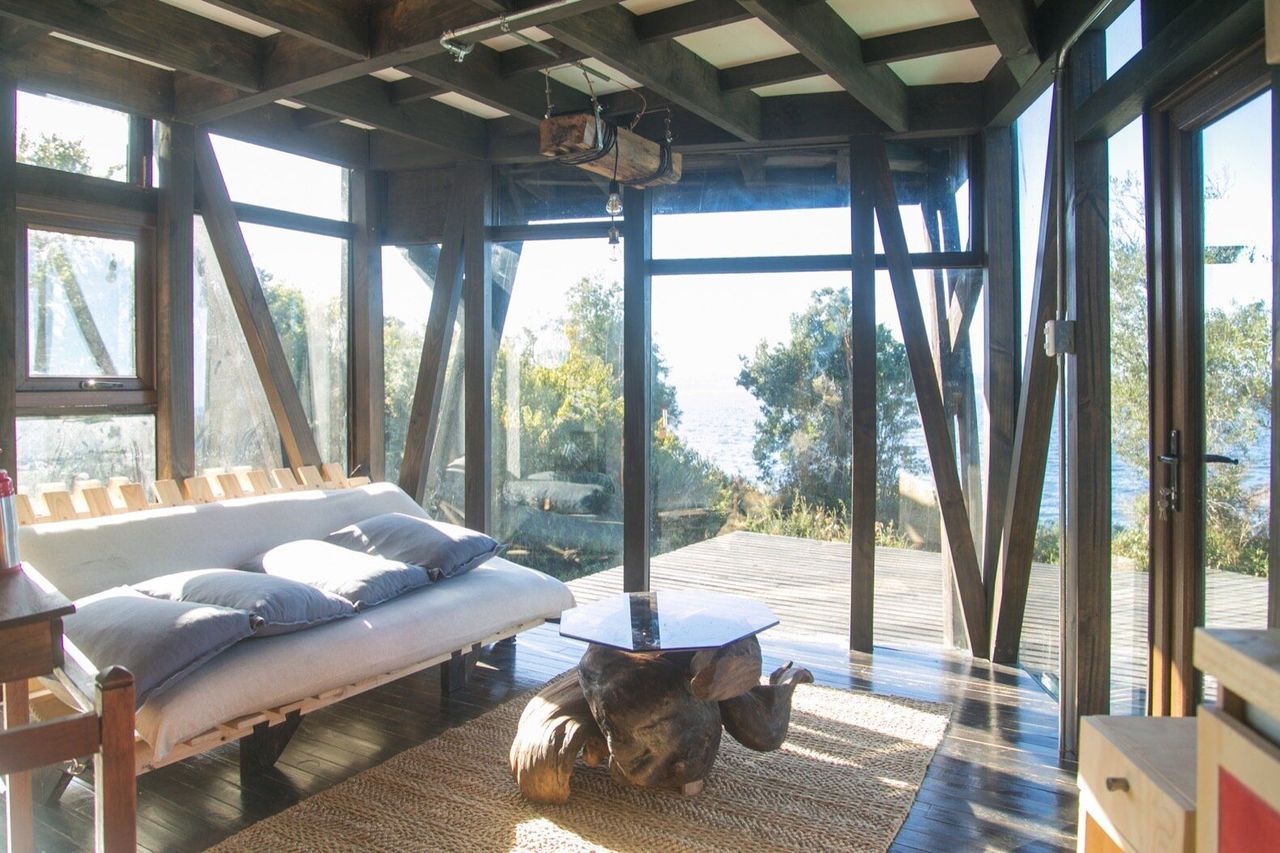 The three-bedroom, two-bath home has a ground-floor kitchen and living area and a loft on the third floor. 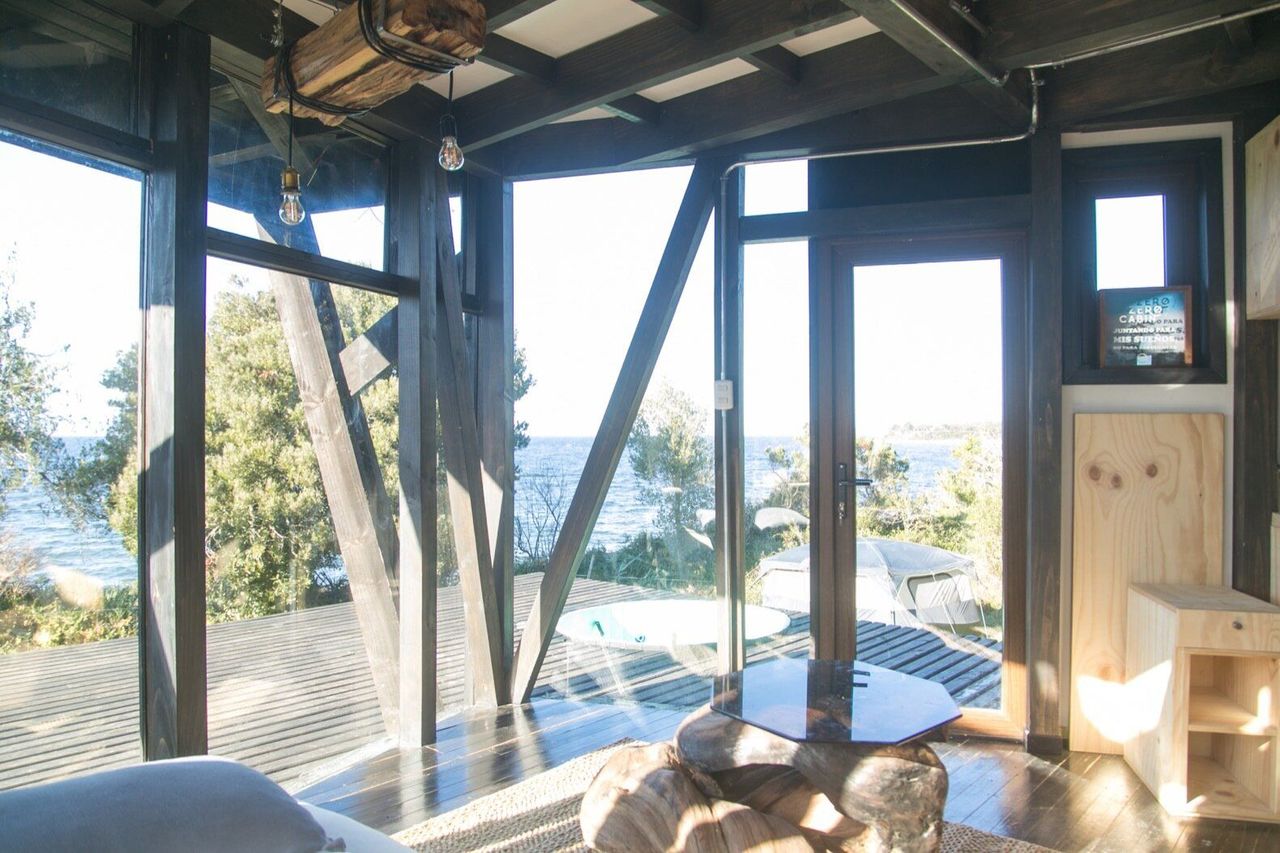 The living room opens up to a 30-square-meter deck and views of the sea.

Like its predecessors, the 1,184-square-foot ZeroCabin Krul has a timber frame clad in structural insulated panels filled with pulverized cardboard. Passive solar principles informed the cabin’s placement and orientation, while a two-kilowatt solar system powers all of the home’s electrical needs. Rainwater is collected and treated in a five-cycle system-electrolysis, reverse osmosis, and filters for quartz, chlorine, and ozone-to meet all of the home’s water needs. Bathroom waste is treated through a vermicomposting Toha System, wherein earthworms turn sewage into nutrient-rich humus. Shower water is collected and reused to flush the toilet.

Due to the site’s remote location along a steep road, the ZeroCabin team had to use a light pickup truck rather than larger vehicle to transport cement and rubble for the foundation. Installing the solar panels was also a tricky endeavor.

"Each panel weighs 90 kilograms, and getting them to the top of the roof and putting them together like LEGO pieces was really difficult," says Lüer. "Using pulleys and scaffolding at a height greater than five stories, we (three people) managed to climb up the structure with the roof panels and install the entire array." The design team used salvaged thermopane panels for the home’s many windows, which are positioned to provide views and optimize solar exposure. 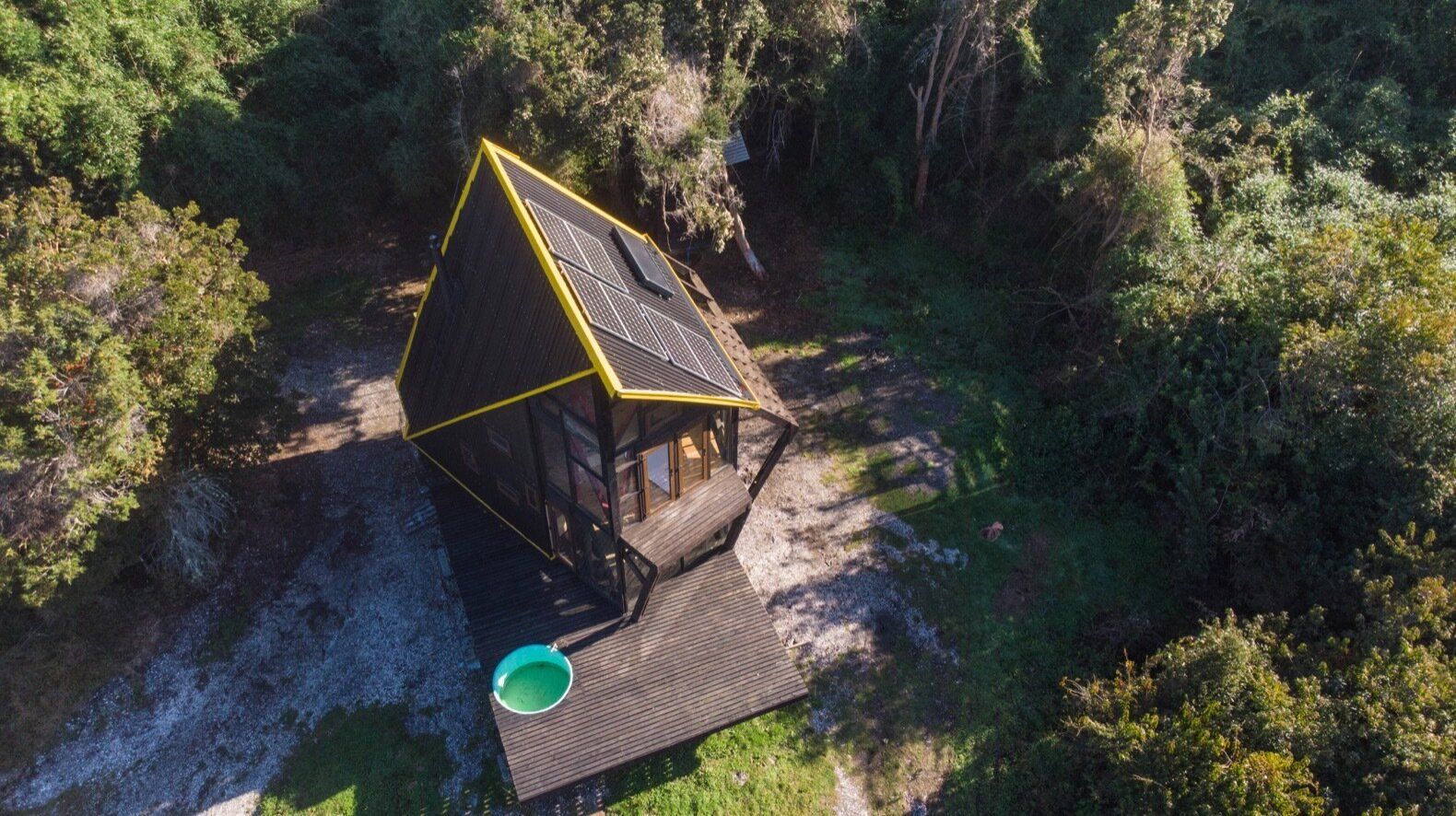 Passive solar design helps to regulate the home’s temperature all year round. Supplemental heating is provided by a Becker stove, which is also used for cooking and heating the hot tub.

By using simple, natural materials and sustainable low-tech solutions, the team was able to complete the cabin in six months for a total of $165,000.

"ZeroCabin Krul faces the sea to the east, but the west side faces a 70-meter-tall hill that blocks the winter sun as early as 1:30 pm," says Lüer. "So we built the north facade perpendicular to the north, opened it up with windows, and expanded the east facade to allow more winter sun to enter the house obliquely." 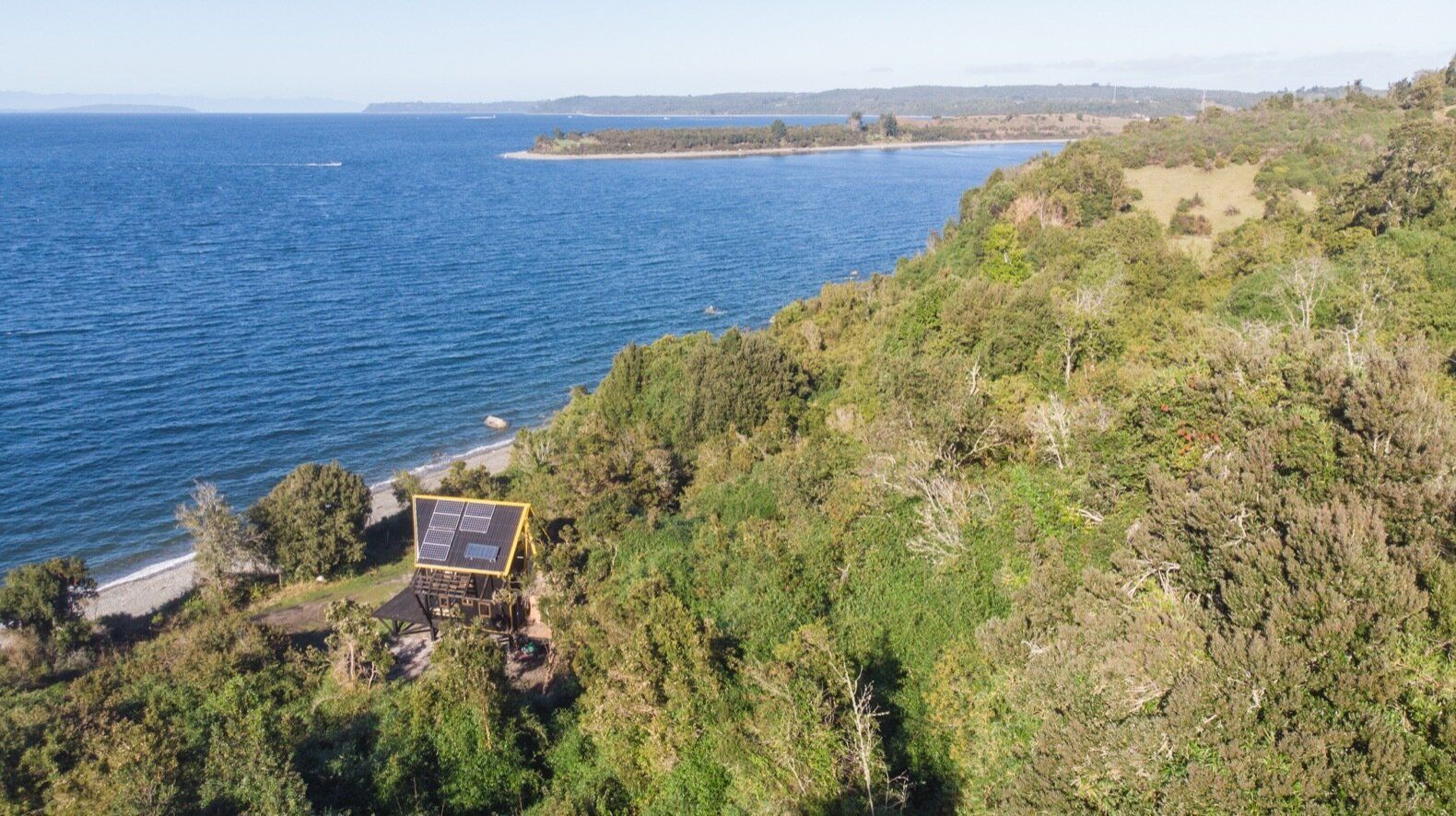 The cabin is elevated 1.5 meters above the ground in response to the region’s extreme humidity and to allow the winter sun to reach the ground floor, which would have otherwise been shaded by tall trees. 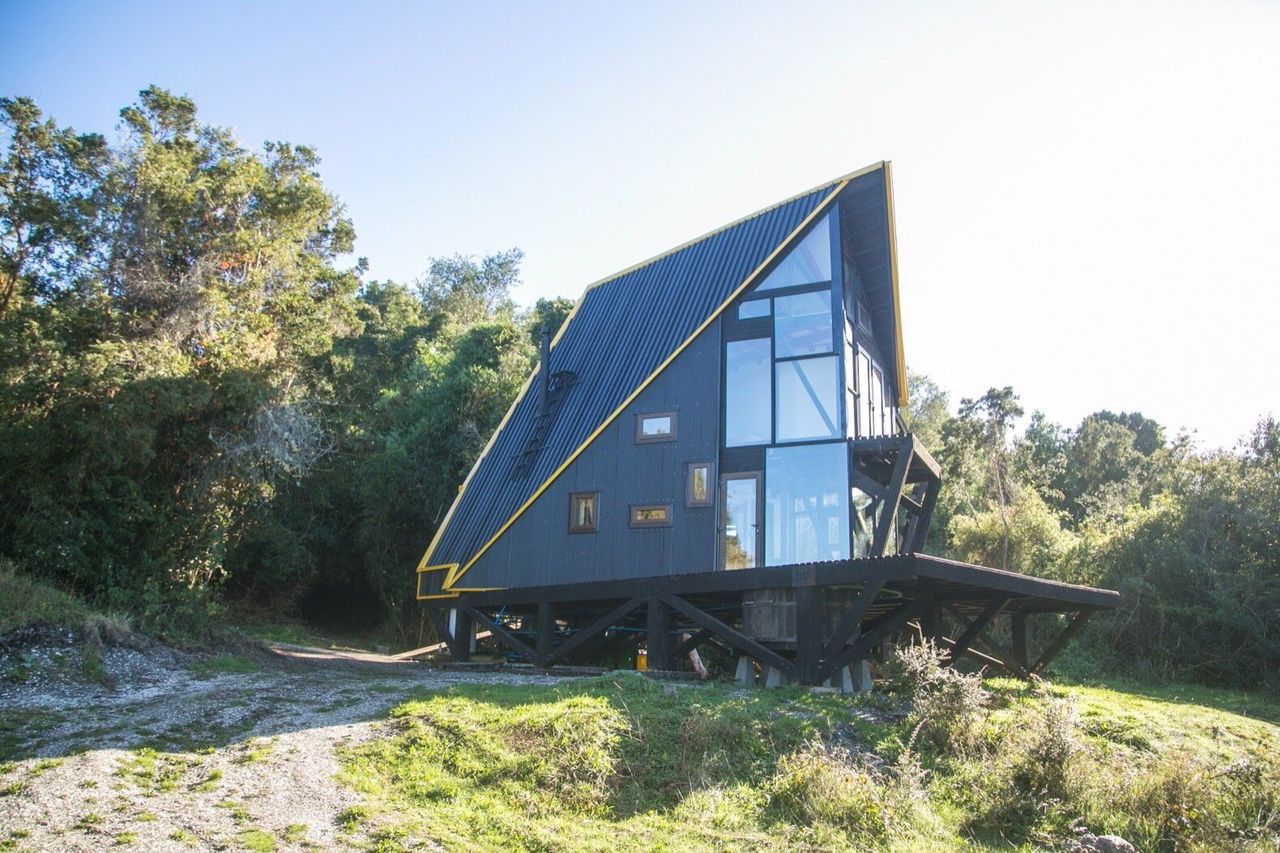 The bright yellow trim calls attention to the ZeroCabin Krul’s unique, site-specific form. "We combined completely different shapes for the four facades, which are optimized for the collection of water, sun, and wind," explains Lüer. "We wanted to highlight those lines to show a new kind of architecture that puts living harmoniously with nature at the forefront."

The Krul sisters didn’t visit the site during construction, and they asked Lüer’s team to surprise them with a grand reveal after the cabin’s completion last May.

"They cried with happiness when they finally saw it," says Lüer. "It was like a reality TV show moment where they appeared at the last minute when the house is already built…the best kind of house that is designed specifically for the site with a unique approach of getting the most energy as efficiently as possible."