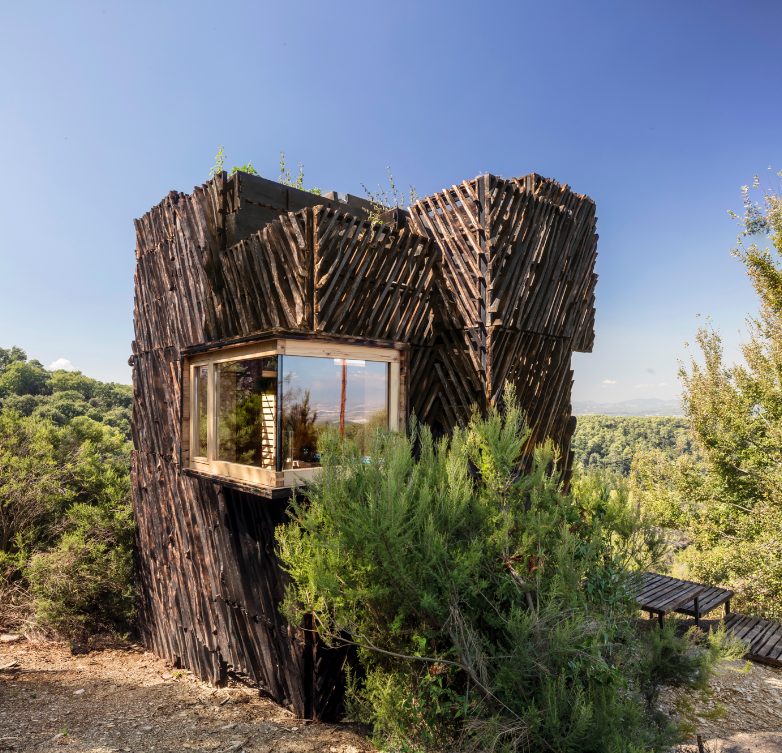 The Voxel by Institute for Advanced Architecture of Catalonia

Crafted by a group of students at the Institute of Advanced Architecture of Catalonia (IAAC), the Voxel offers an eco-friendly space that is equipped for 14 days of self-confinement.

Tucked away in the Spain’s Parc de Collserola, a secluded nature area just outside of Barcelona, a striking wood-and-glass structure known as the Voxel is made of materials primarily culled from its site. The small-but-functional space was recently completed by a team of students and researchers at the Institute of Advanced Architecture of Catalonia’s (IAAC) Valldaura Labs, as part of the Master in Advanced Ecological Buildings and Biocities (MAEBB) program. 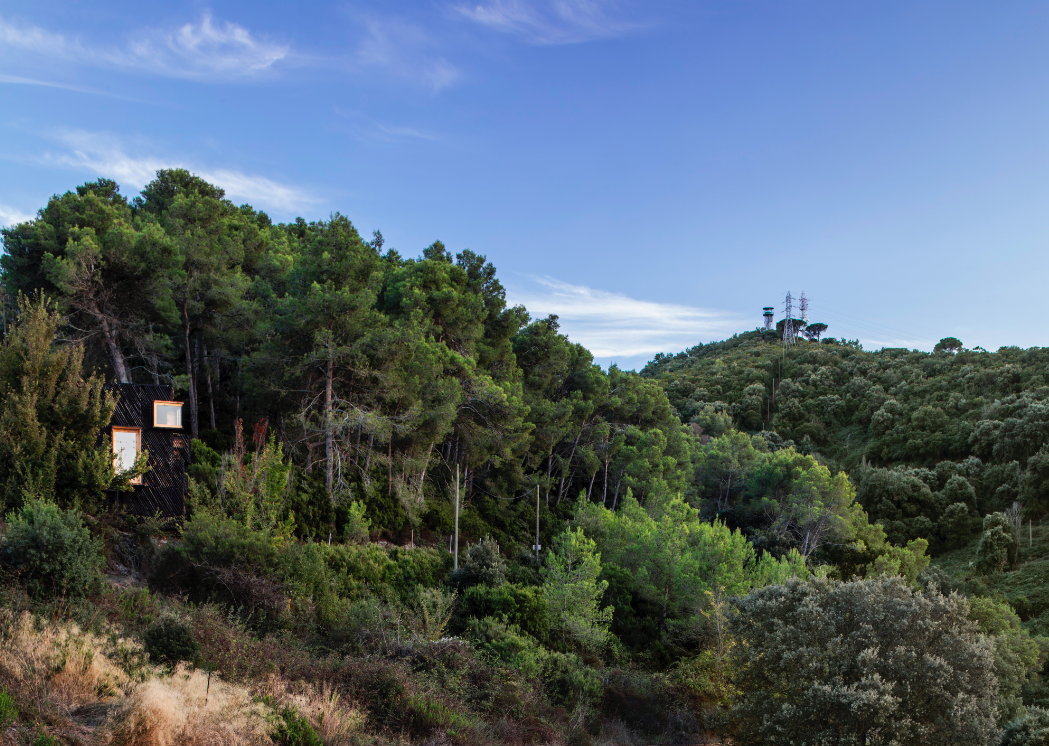 Under the direction of Daniel Ibáñez and Vicente Guallart, the 2019–2020 MAEBB class designed and built the 130-square-foot "quarantine cabin," which they executed in just five months as a response to the COVID-19 pandemic. The students worked with an array of experts to transform local timber into "structural and thermal material" for the project using sustainable forest management practices. The result is a fully equipped, eco-friendly living space where a single occupant can self-isolate for up to 14 days. 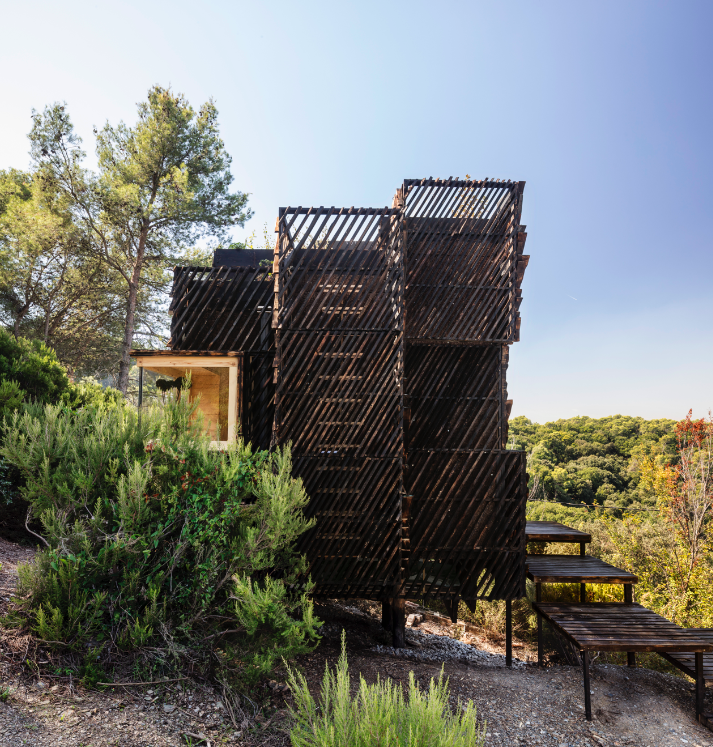 The cabin’s exterior is mounted with rain-screen panels, which the students created using waste materials from the CLT-production process.

At the start of the project, the students harvested 40 pine trees near the site to be used for the construction. After allowing the wood to dry for three months, they moved the raw material to the Valldaura campus to be processed into thin layers, or lamellas, which the students then pressed to create cross-laminated timber (CLT) panels for the cabin. 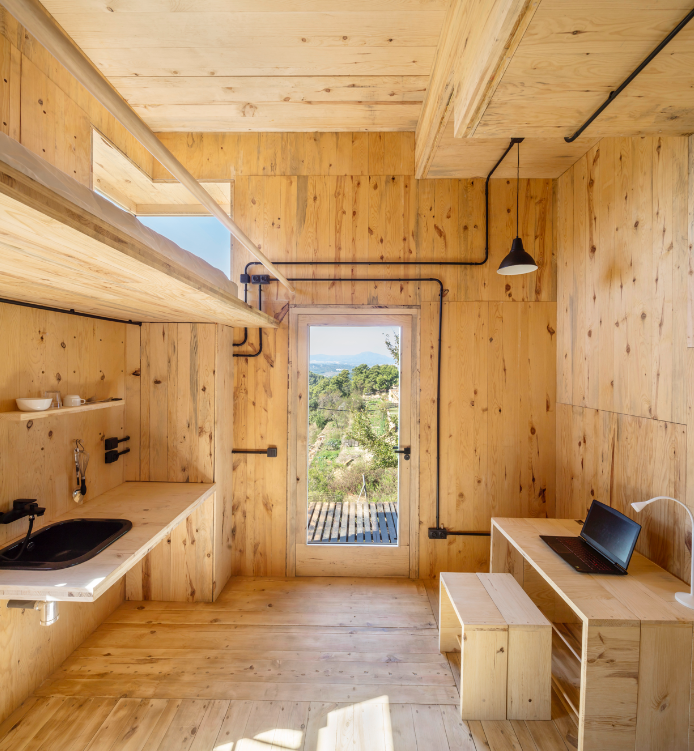 The cabin receives electricity from an independent battery storage that can power the lighting and devices for a single resident for up to 14 days. 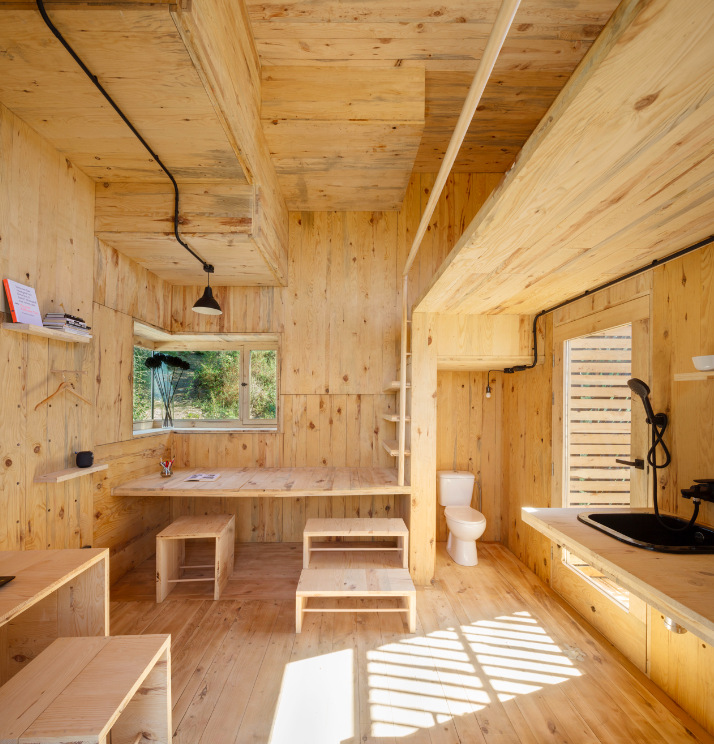 Large windows bring ample natural light inside the 130-square-foot structure. While the toilet is positioned inside the cabin, the shower is located on the exterior and is hidden from view.

Every lamella of every panel was tracked and traced," notes the team. The students took this measure to ensure that each wooden element of the house could be tied back to the site of the tree where it came from. 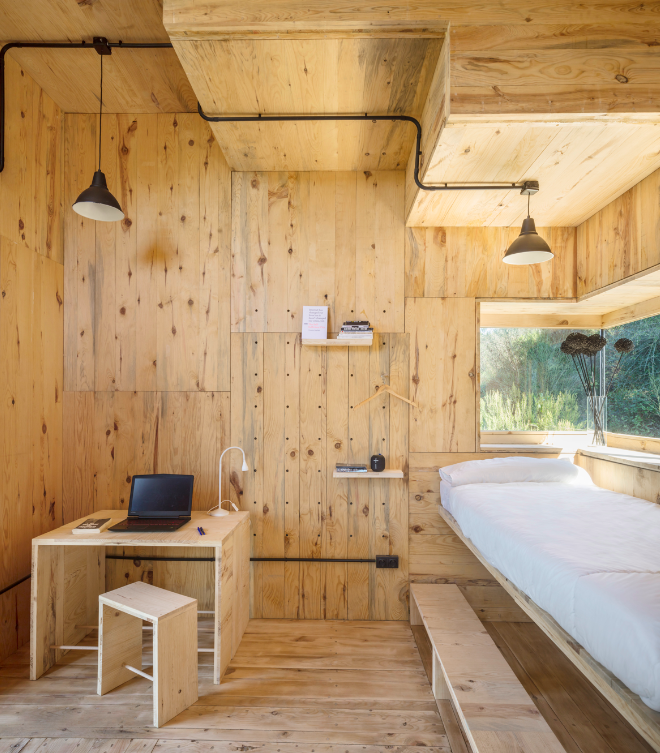 The long table underneath the window can also serve as additional sleeping area. 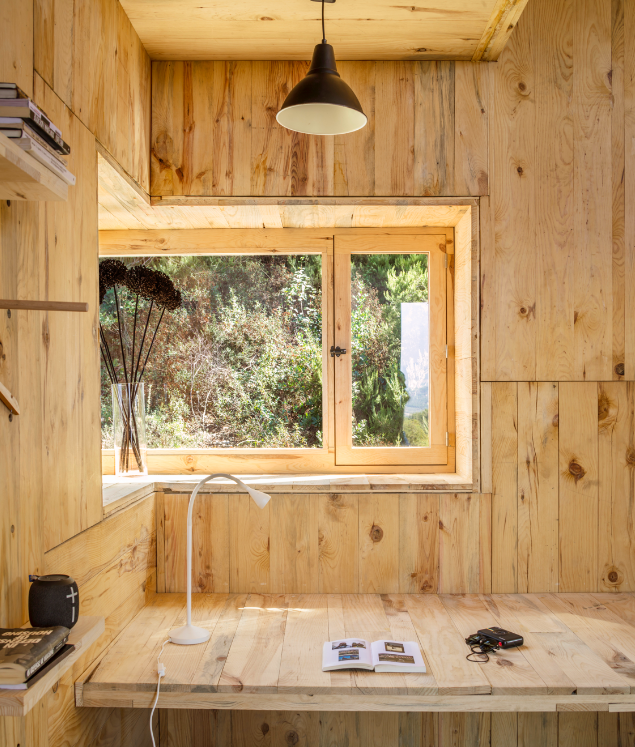 The Voxel’s wood-clad interior blends into its natural setting.

In order to use less metal for the construction, the team relied on lap joints and wooden dowels to hold the panels together. After wrapping the cabin with a layer of cork insulation, the students used the Japanese shou sugi ban technique to create "a burnt wooden skin" for the exterior, which is intended to help protect the building from rain, the team explains. The rooftop garden planters were developed using computer software that eliminated the need for screws or glue. They hold an array of local plants and also funnel rainwater into a collection tank below.

On one side of the cabin, an exterior ladder leads to the roof, which features a series of garden boxes, three solar panels, and a funnel for rainwater. A self-contained biogas system facilitates graywater recycling and blackwater treatment while also generating cooking and heating fuel, as well as sanitary fertilizer.

In addition to the energy provided by the cabin’s solar panels, the space is also equipped with a battery storage system that’s specifically designed to accommodate a single resident for up to 14 days. 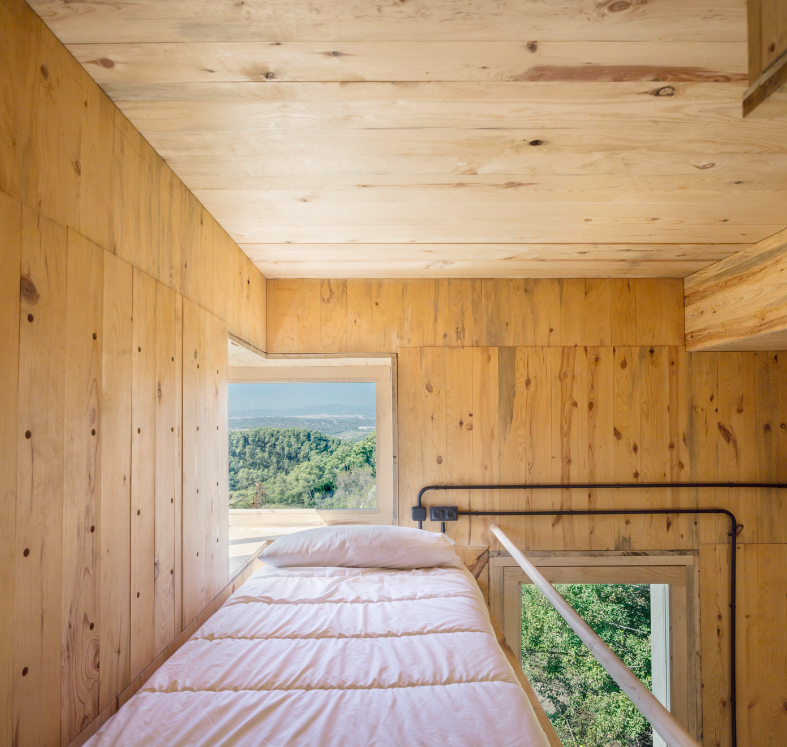 Inside, the Voxel presents a minimal, wood-clad aesthetic. The same local material is used to create all of the furniture, which includes a platform bed, desk, dining table, and kitchenette.

The innovative design of this off-grid cabin is characterized by a focus on hyperlocal materials and industrialized building techniques. Fittingly, the IAAC students describe the Voxel as "visceral proof of a forthcoming ecological architectural paradigm." 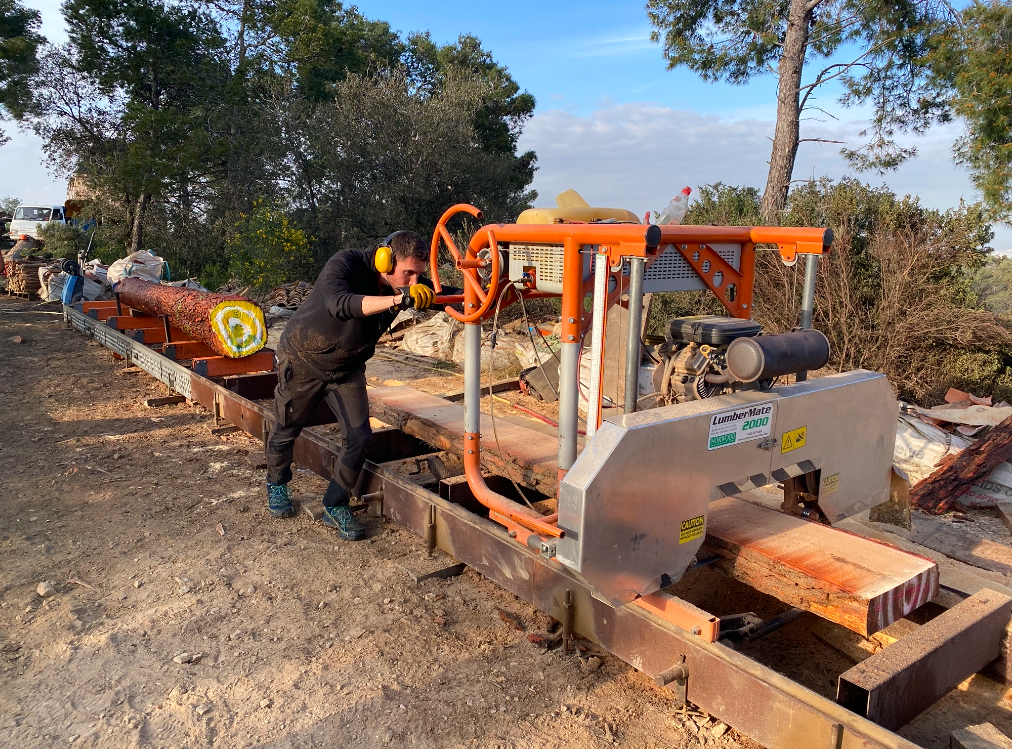 From April to August 2020, the group of 17 master’s students worked with expert volunteers to develop the 130-square-foot cabin, which features a bed, desk, dining area, and small kitchen, as well as a toilet, outdoor shower, and garden rooftop. 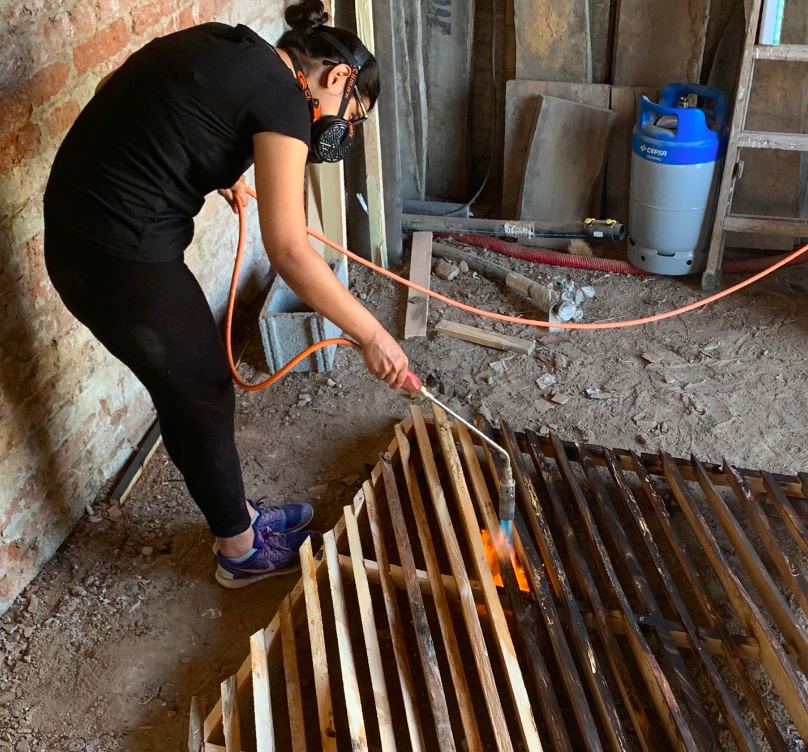 To weatherproof the Voxel’s exterior, the students relied on an ancient Japanese technique known as shou sugi ban (or yakisugi), which involves charring wood to make it repel water. 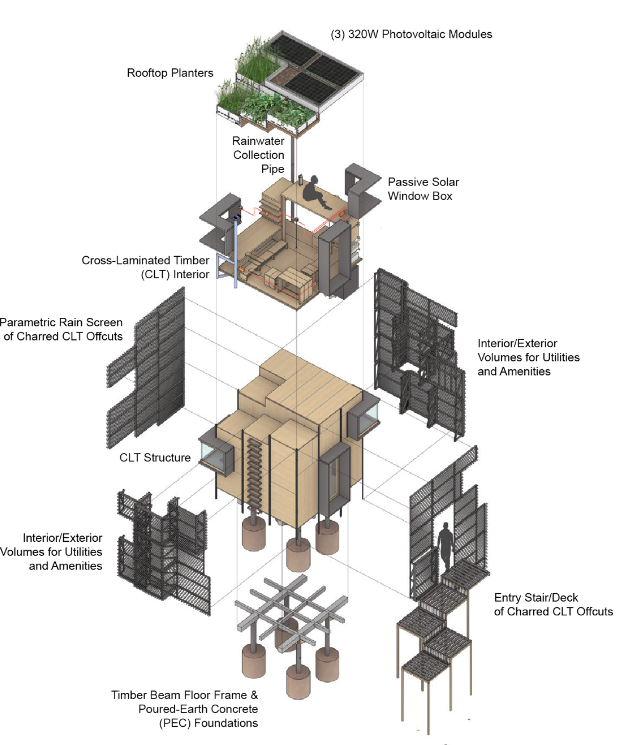 The MAEBB 2019–2020 master’s class utilized local timber and avoided carbon-intensive materials, such as nails and screws.