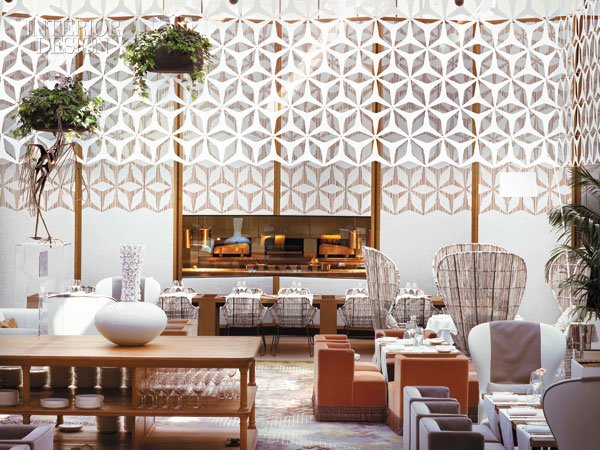 Patricia Urquiola has earned boatloads of critical and commercial success. Ever prolific, she's tried her hand at an astonishing range of products, from outdoor furniture in an overblown wicker weave to a bathtub aerodynamic enough to fly. Her client list reads like a who's who of top-shelf manufacturers: Agape, Axor, B&B Italia, Flos, Hansgrohe, Kartell, Moroso. No less impressive is her first hotel project, the Mandarin Oriental, Barcelona—about 500 miles from where she was born.

Partnering with Carlos Ferrater of Ferrater & Asociados and the namesake founder of Juan Trias de Bes TDB Arquitectura, who together won a competition to gut and revamp the bank building chosen by the five-star chain for its first Spanish location, she handled virtually every aspect of the interiors, from the armchairs in the restaurant to the tiles of the lap pool.

The result is a singular interpretation of understated luxury steeped in a serious sense of place. A nine-story 1955 building, the onetime Banco Hispano Americano stands squarely in Barcelona's commercial heart, on one of the city's most storied avenues, the Passeig de Gràcia—Antoni Gaudí's Casa Batlló apartments are just steps away. A visual extension of the Passeig, an entry ramp pierces the limestone facade to bring visitors through a stylized gold-anodized aluminum screen reminiscent of the scrolling ironwork on facades all over town. In the bar, the steel doors of safe-deposit boxes cover the ceiling and walls, the highly burnished metal giving the room a rich gleam. 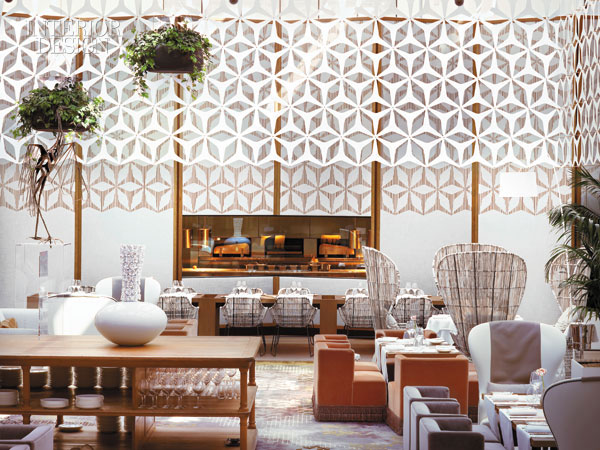 In the lobby lounge at the Mandarin Oriental, Barcelona, a suspended PVC screen's geometric motif repeats on the acoustical wall covering behind. Photo by Eric Laignel. 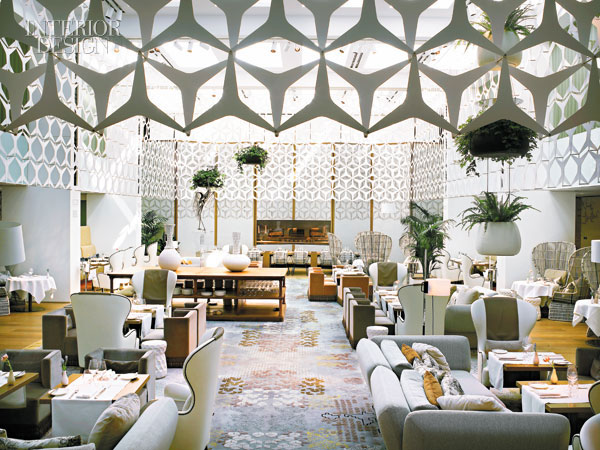 In the center of the lounge's armchairs, sofas, and stools by Patricia Urquiola, dishware is stored under a French antique ironing table. Photo by Eric Laignel. 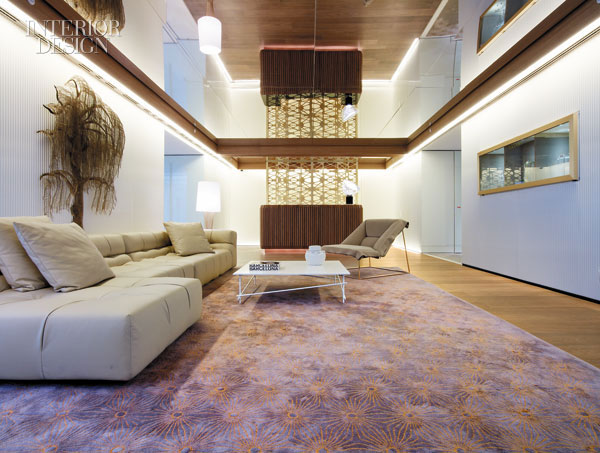 A sectional, chair, and cocktail table, all her production pieces, gather near the concierge. Photo by Eric Laignel. 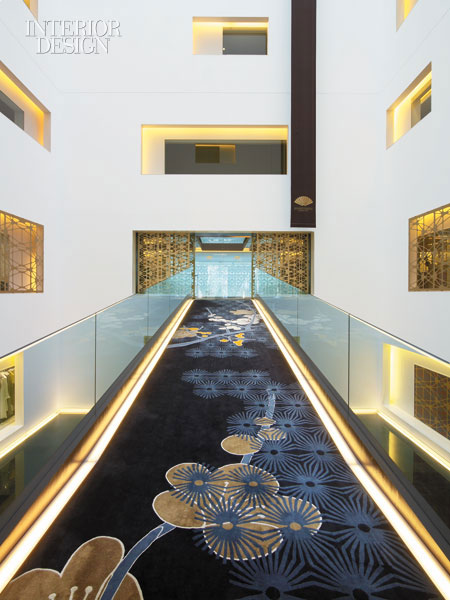 Her custom runner in silk and wool lines the entry ramp. Photo by Eric Laignel. 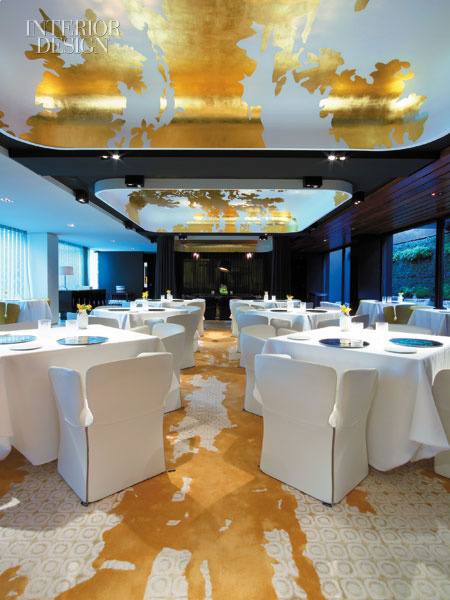 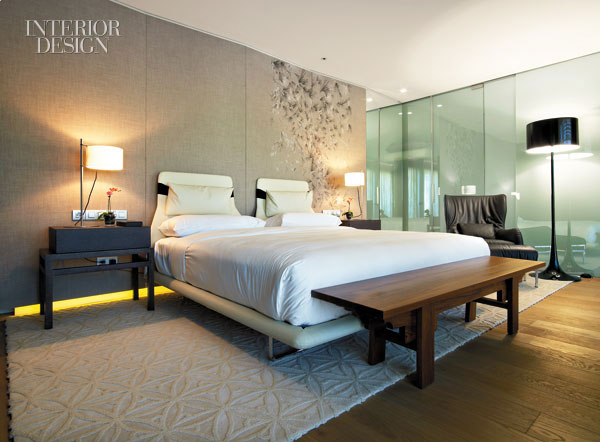 Her bed and bench and Sebastian Wrong's floor lamp meet in the bedroom of a suite. Photo by Eric Laignel. 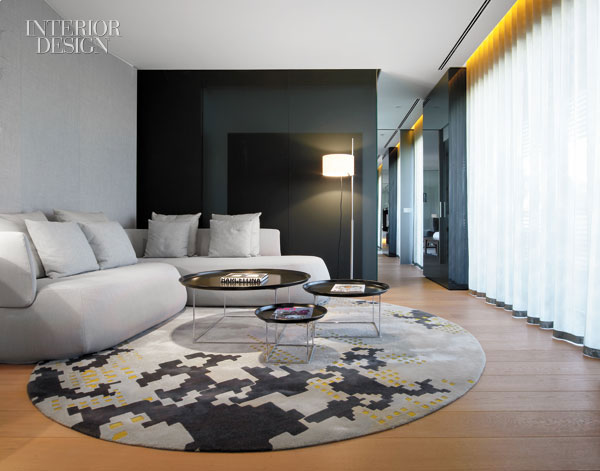 Its sitting area is furnished with her sofas and tables. Photo by Eric Laignel. 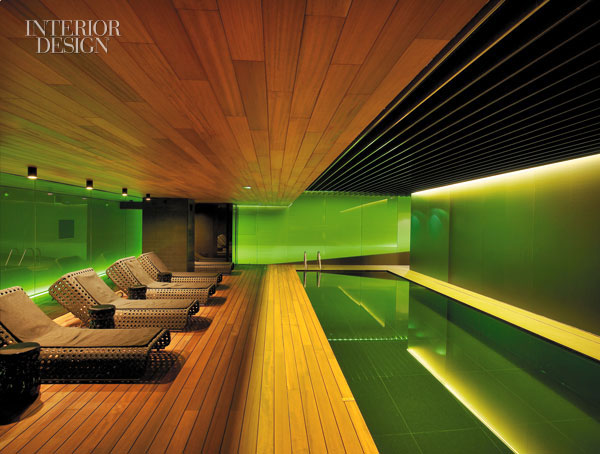 Urquiola's chaise longues line the iroko decking around the granite-clad lap pool in the basement spa. Photo by Eric Laignel.