The home’s industrial facade is easily overlooked-but step through the door and you’ll find a sublimely sunlit, matte-black interior.

British-Ghanaian architect Sir David Adjaye has earned numerous accolades throughout his career-including a 2017 appointment as Knight Bachelor by Queen Elizabeth II and, more recently, the 2021 RIBA Royal Gold Medal. His international portfolio includes the Nobel Peace Center in Oslo and the Smithsonian National Museum of African American History and Culture in Washington DC-and he’s also noted for his bold residential commissions closer to home in England.

One such property, known as the Lost House, occupies the former delivery bay of an industrial building in London-and it just hit the market for only the second time since its completion in 2004. 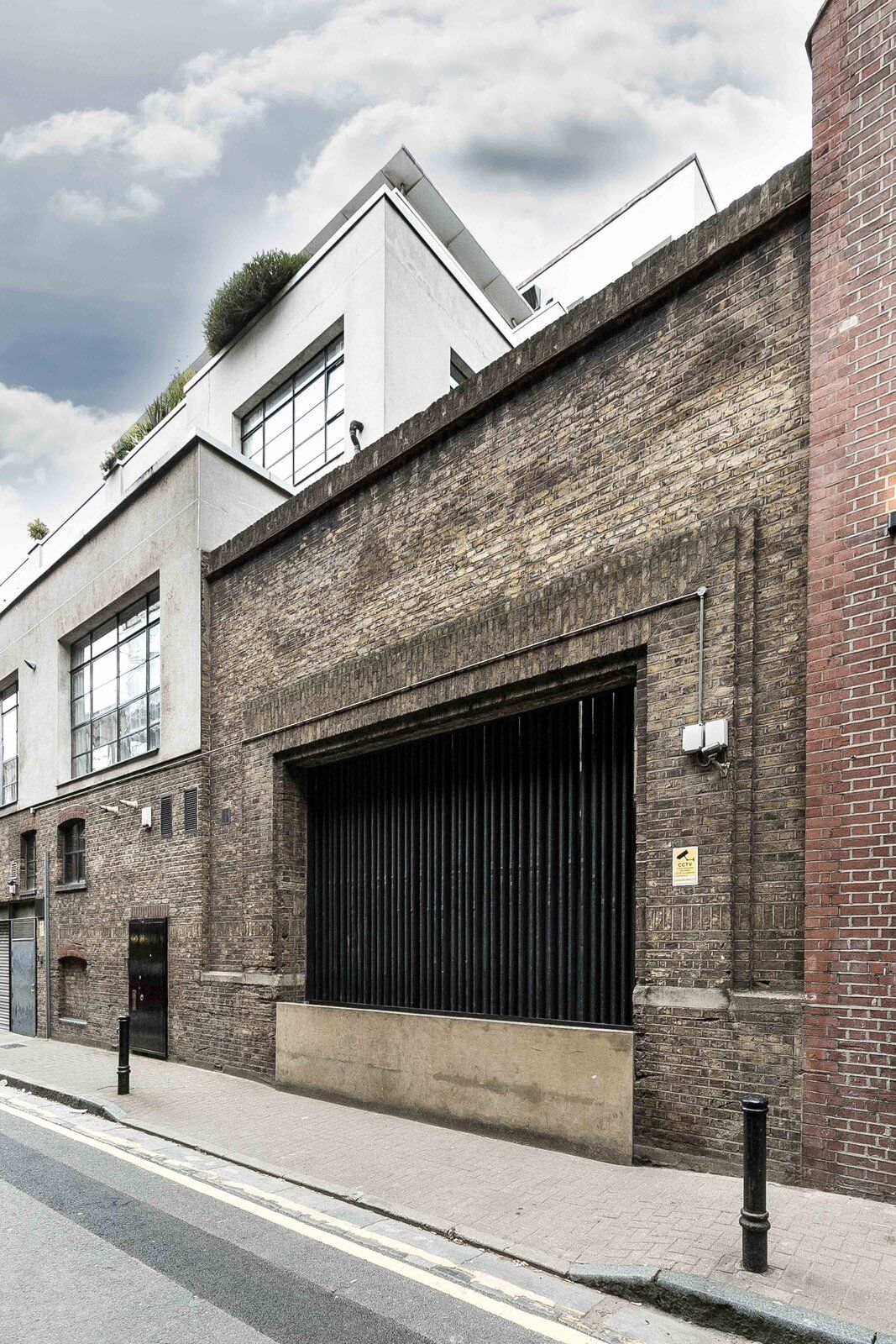 The Lost House by Sir David Adjaye occupies what was once an industrial building’s drive-through delivery bay. 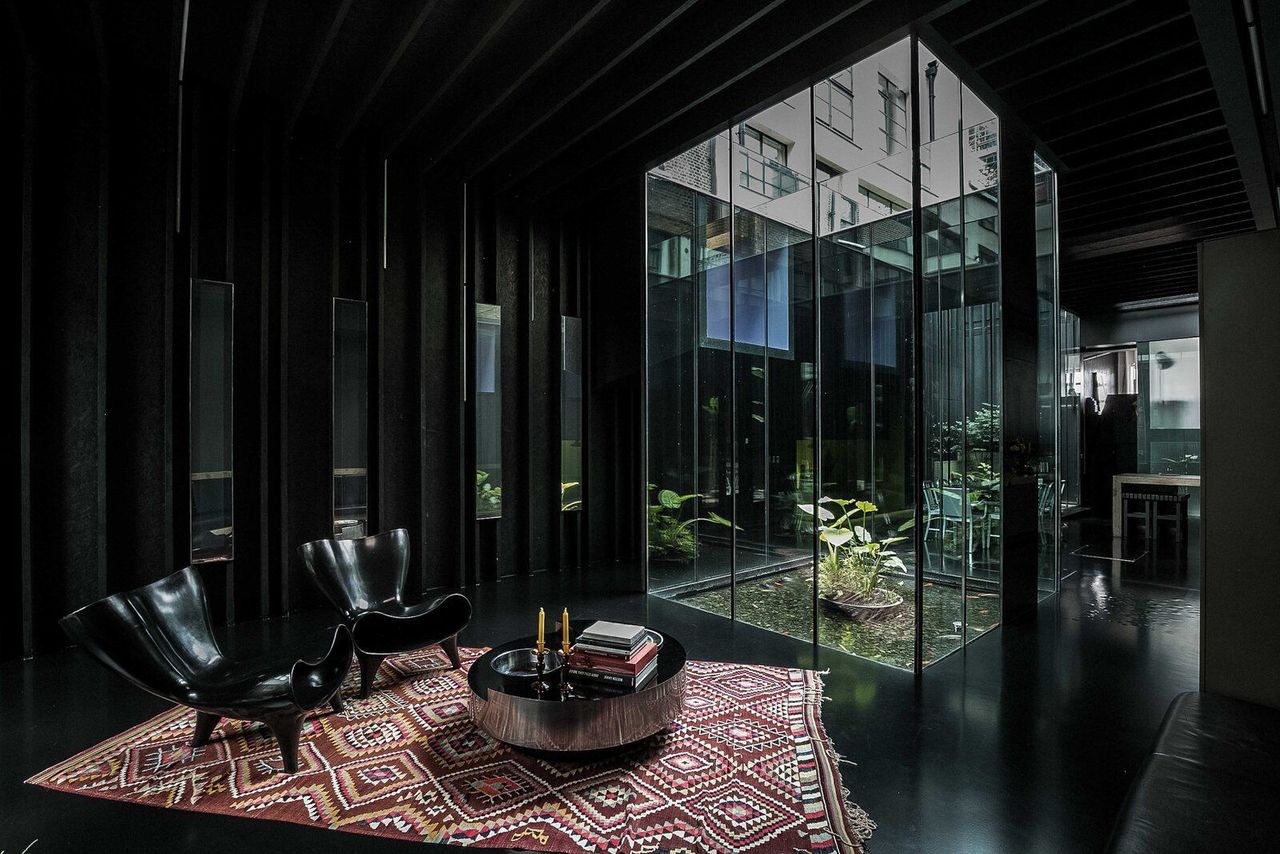 Now enclosed at both ends, the unassuming facade conceals interior features such as a sunlit courtyard and a swimming pool. 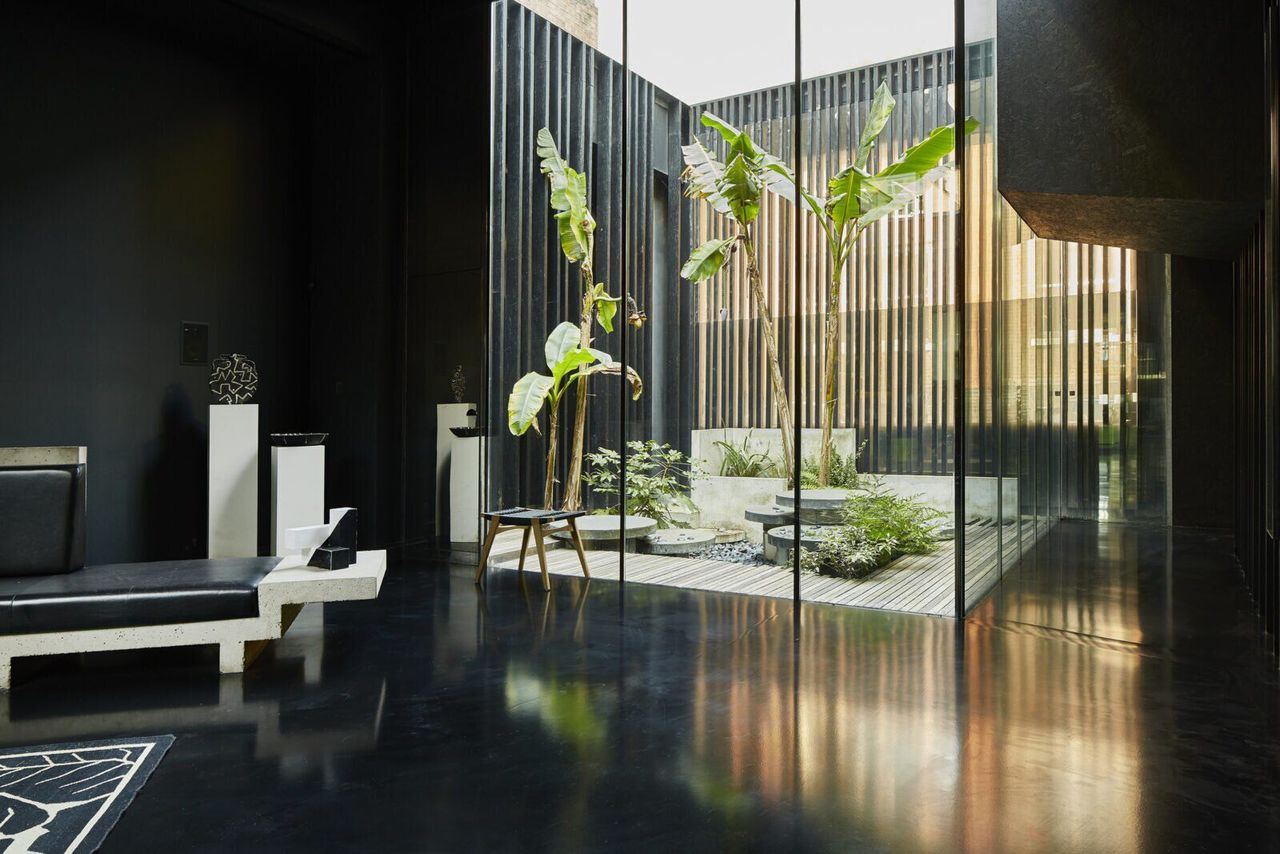 With no traditional windows, the main level is illuminated by three expansive light wells that define a series of glass-encased outdoor areas.

With its moody black interior, the nearly 4,000-square-foot Lost House has been the site of numerous parties, photo shoots, and even fashion shows. At the heart of the main level is a voluminous space-some 60 feet long and over 13 feet high-encompassing a front reception area with built-in furniture, as well as a kitchen, dining area, and sunken living room toward the rear. 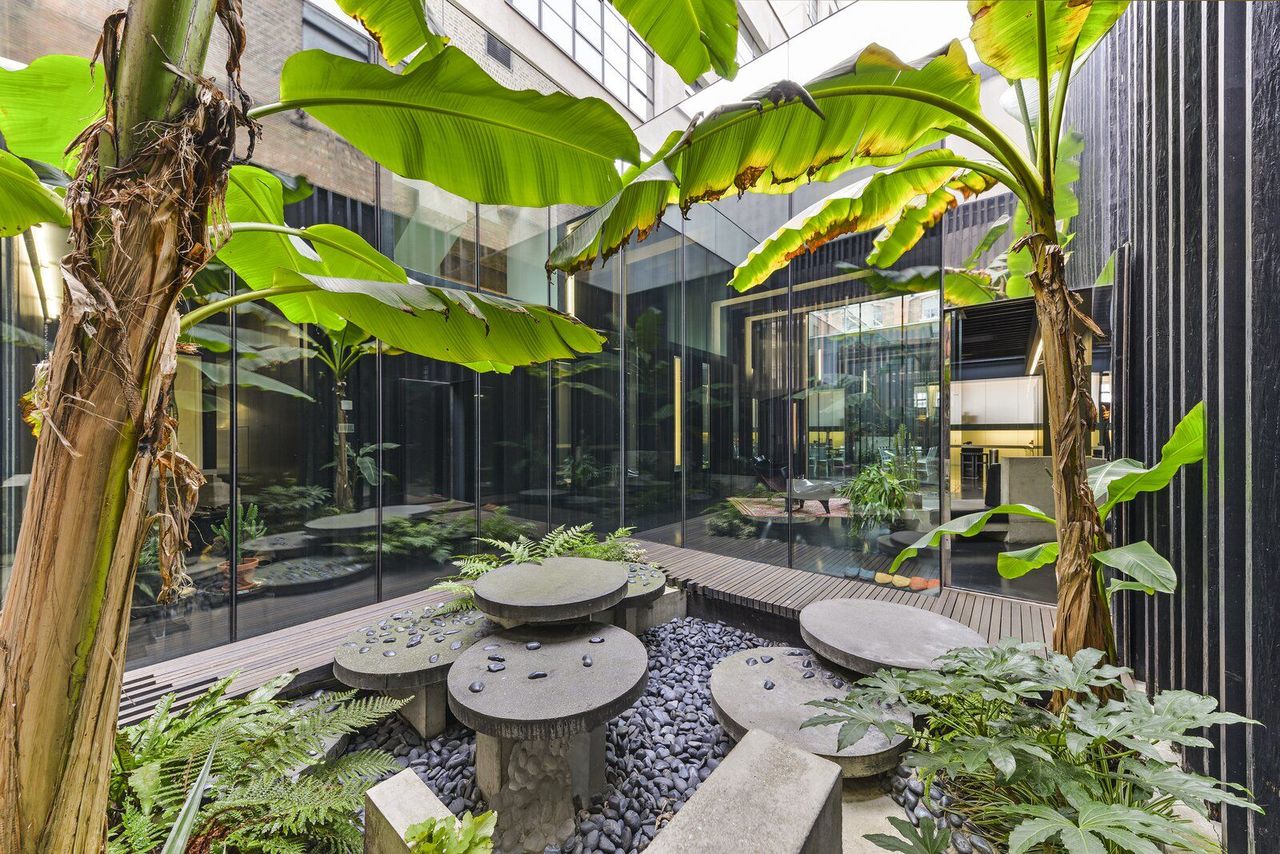 A courtyard sits just behind the front facade. It’s enclosed on two sides with glass walls overlooking the interior entryway and reception area. The reception area features original built-in furniture, and it opens to the courtyard via a hidden door along the wall. Along one wall of the courtyard, vertical wood slats enclose the former loading bay and diffuse sunlight entering from the street. Slit windows along an interior wall also filter natural light into the guest bedroom on the opposite side.

Absent any windows, the long, open space is illuminated by three large light wells encased in glass. Smaller light wells also connect to the larger ones and filter natural light into the bedrooms. Further back along the main level, the second light well holds a glass-enclosed water feature and divides the front reception from the kitchen, dining area, and sunken living room. 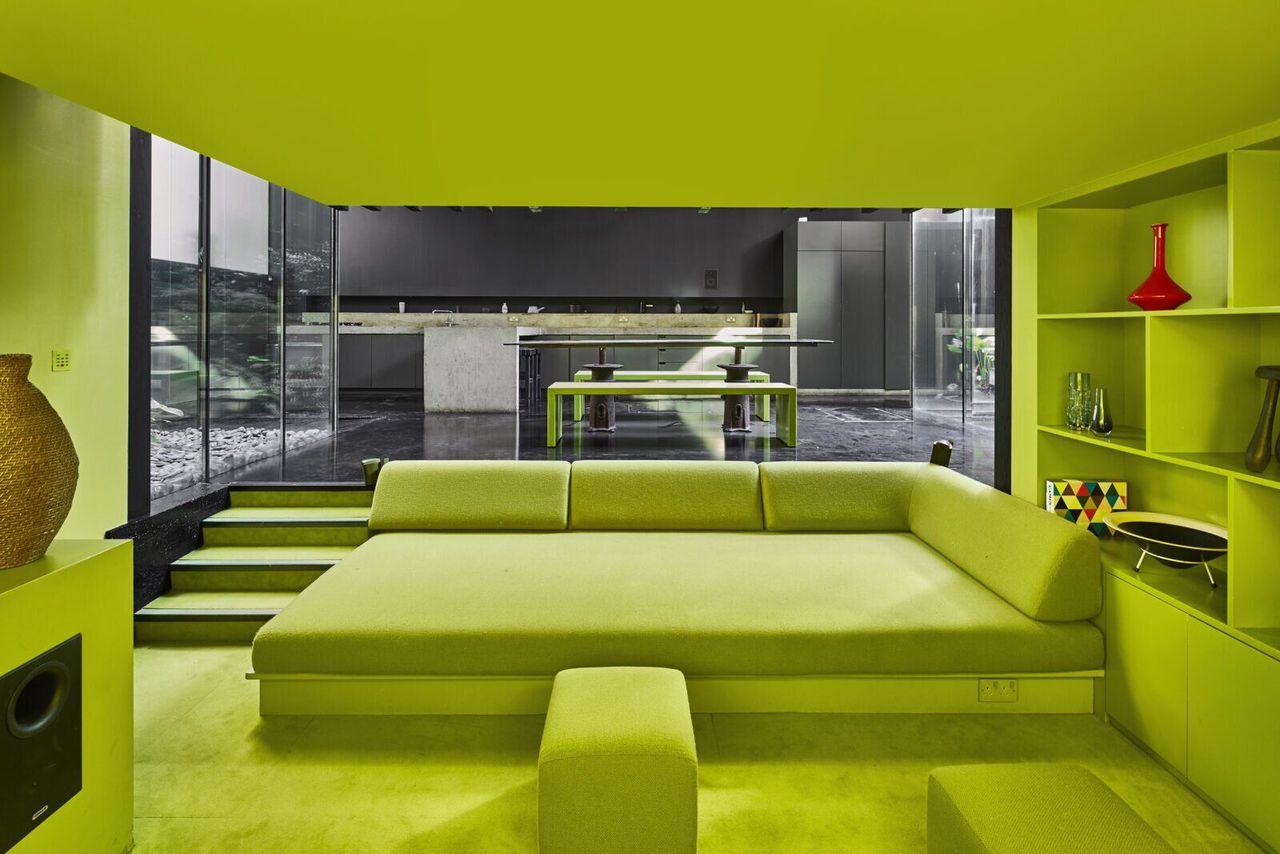 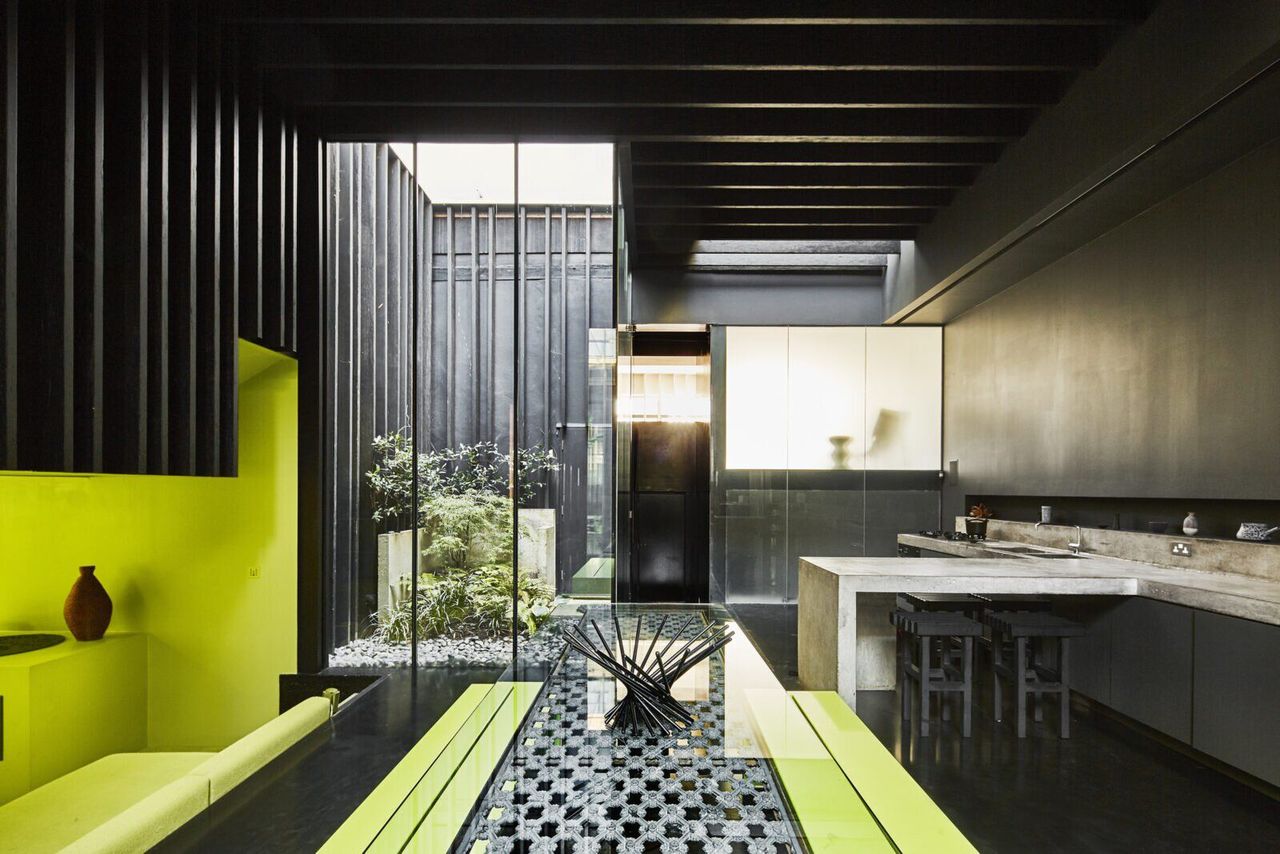 The third light well illuminates a small garden in the corner. Sunlight also enters from the home’s rear garage, accessible from a parallel street. 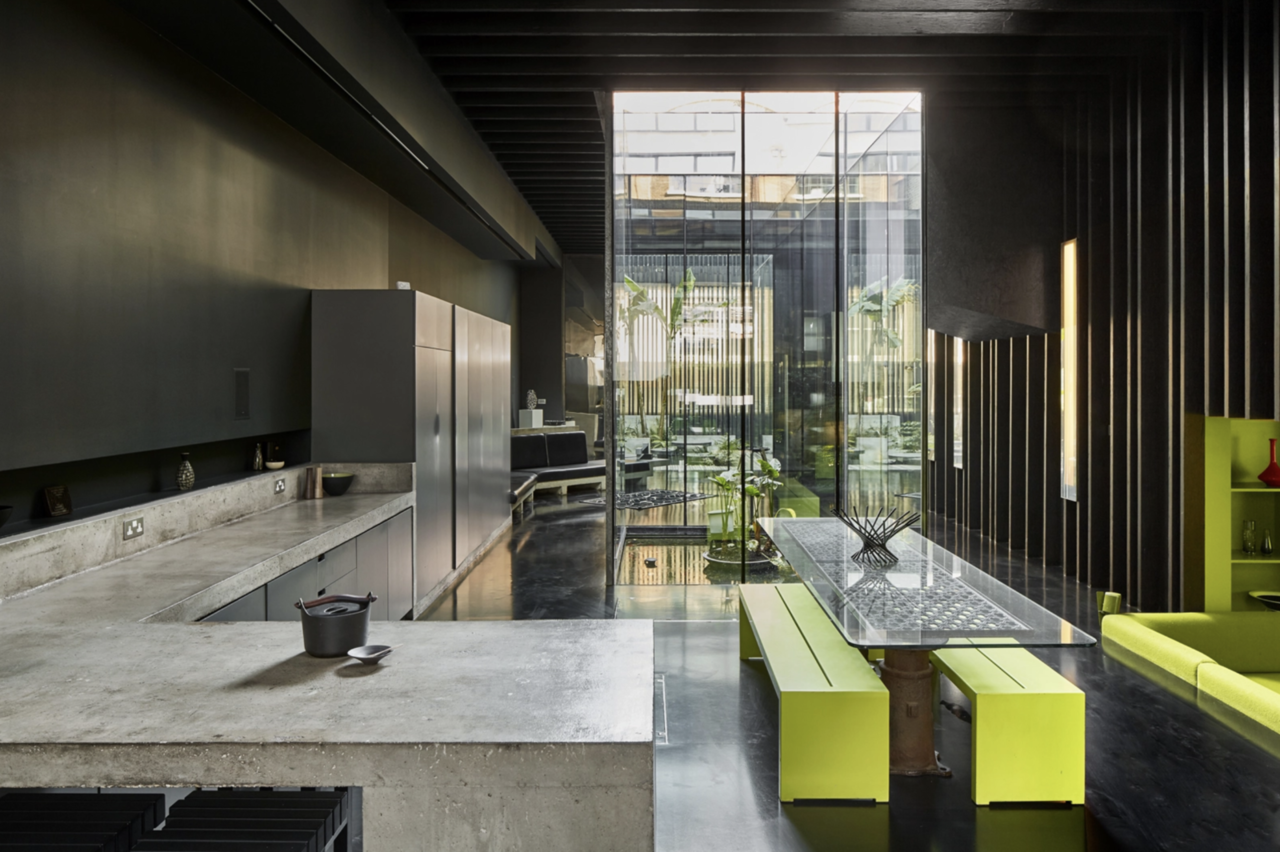 The minimalist kitchen features concrete countertops and a wall of storage.

The home has two bedrooms, three full bathrooms, and a home office that could be converted into a third bedroom. The building is located in London’s Kings Cross neighborhood with easy access to transportation and businesses. Keep scrolling to see more of the home, currently listed for £6,500,000 (approximately $8,410,000). At the front of the home, stairs lead up from the entryway to the bedrooms. The first bedroom, which includes an in-room vanity and adjacent water closet, receives natural light through the slit windows in the reception area. 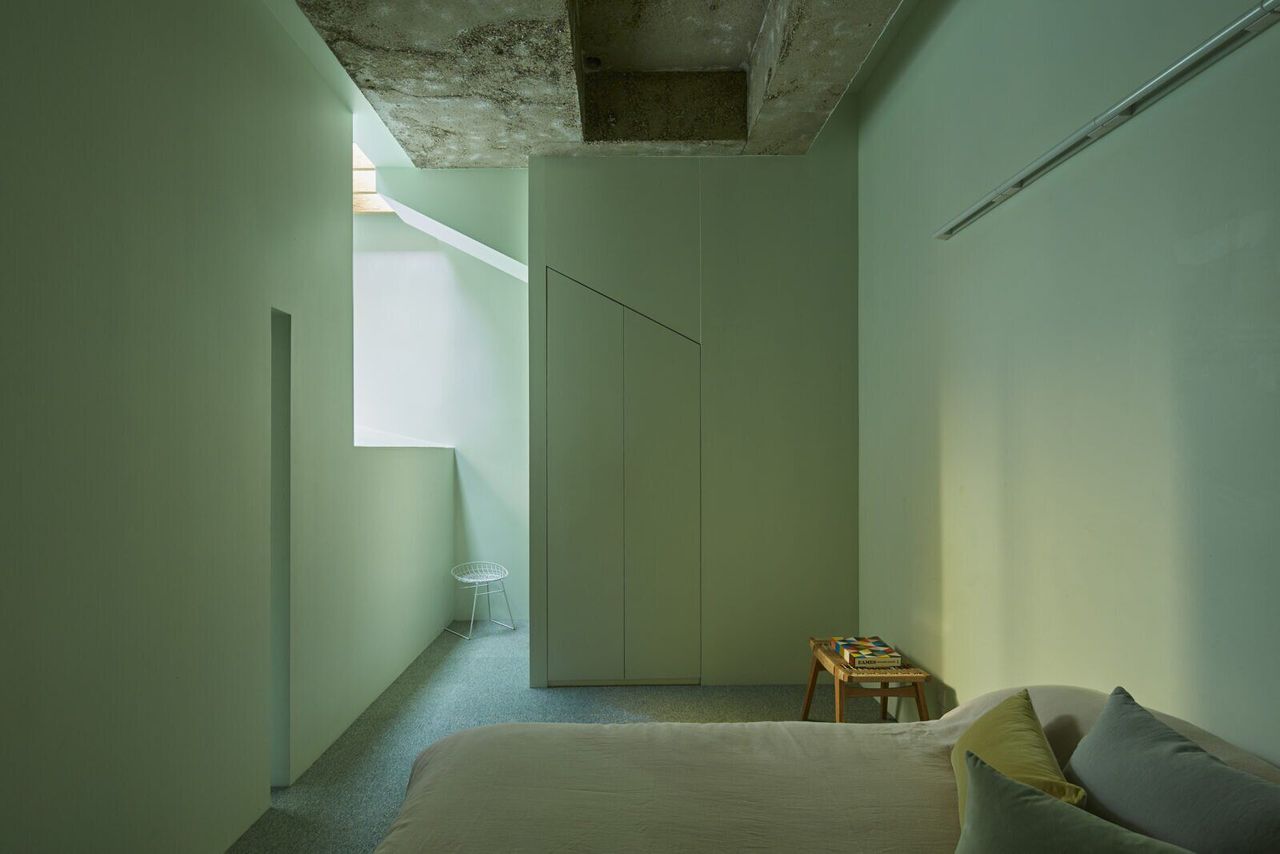 A smaller light well in the corner of the room pulls natural light in from the front courtyard. 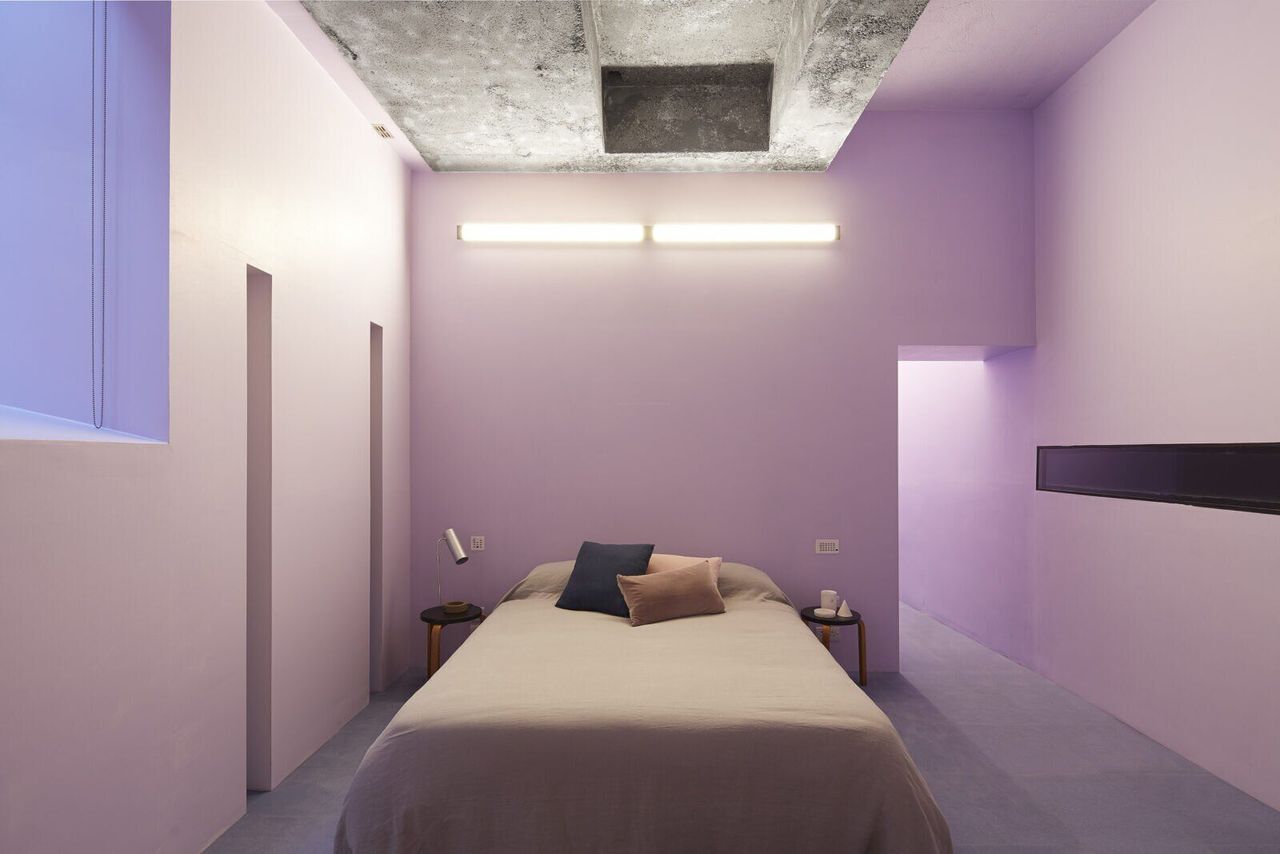 The principal bedroom, accessible via a long hallway that runs parallel with the first bedroom, features another light well that draws in sunlight from the central water feature. 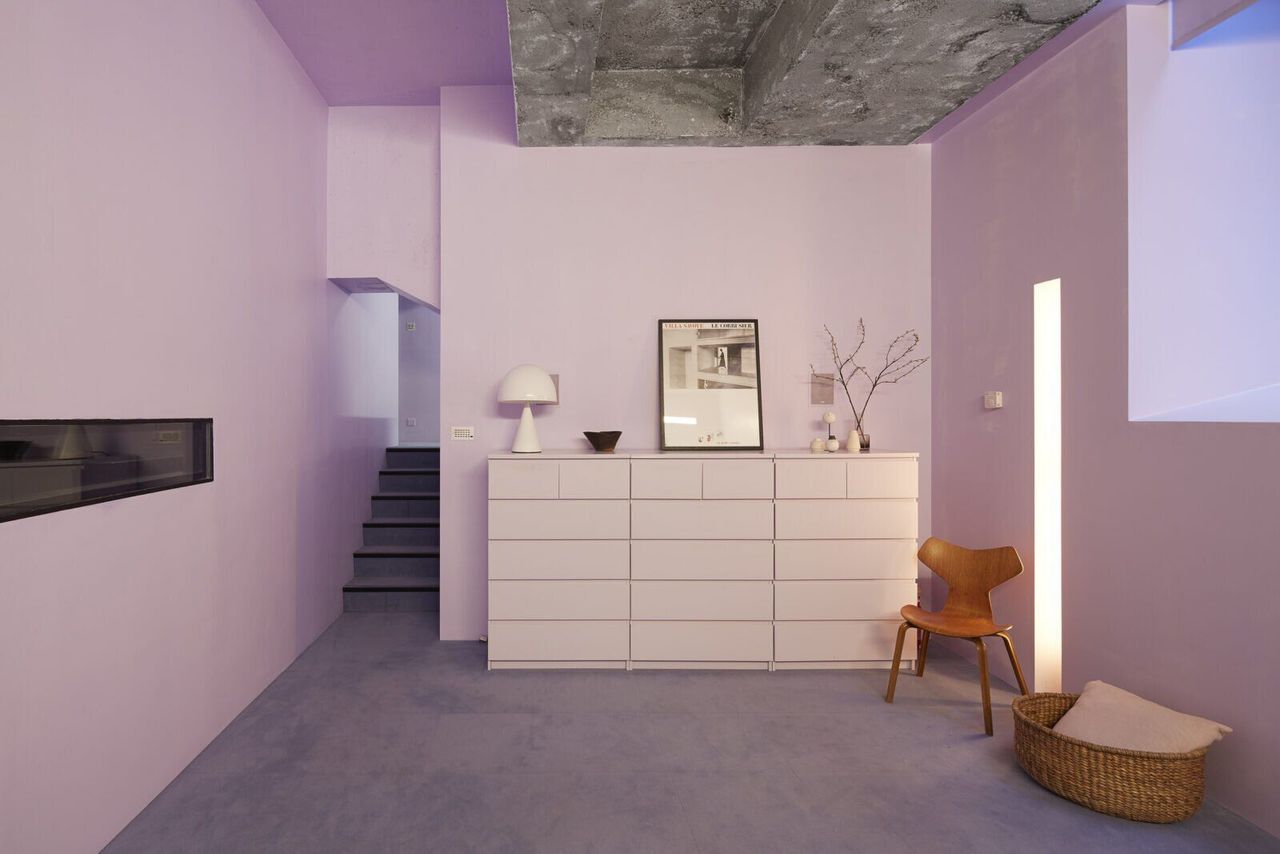 Lights mounted inside the slit windows illuminate the kitchen and dining area on the opposite side of the wall. Stairs at the rear of the bedroom lead up to the bathroom and adjacent lap pool. Using the original loading bay as a structural base, Adjaye designed a lap pool that runs nearly the full length of the home. A slit window along one wall filters light in from the adjacent principal bedroom.