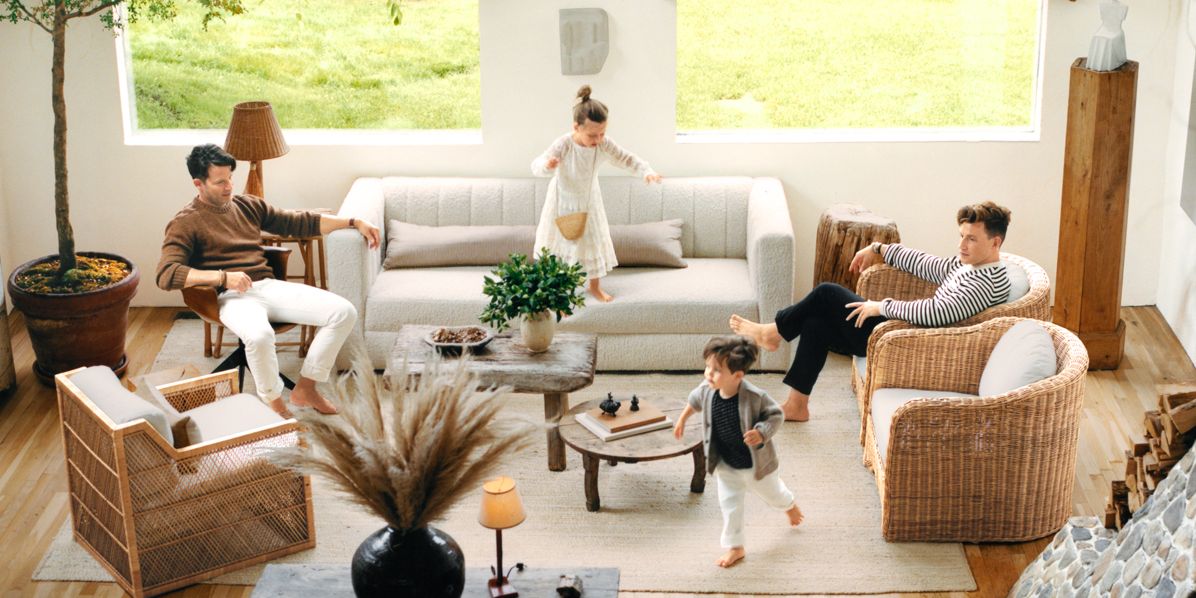 If you had asked interior designer Nate Berkus 15 years ago where he would feel at peace, it is unlikely that he would have described a house near a beach

Berkus was on vacation in Arugam Bay in Sri Lanka in 2004 when the country was devastated by a tsunami, and though he survived, his partner at the time, photographer Fernando Bengoechea, did not. 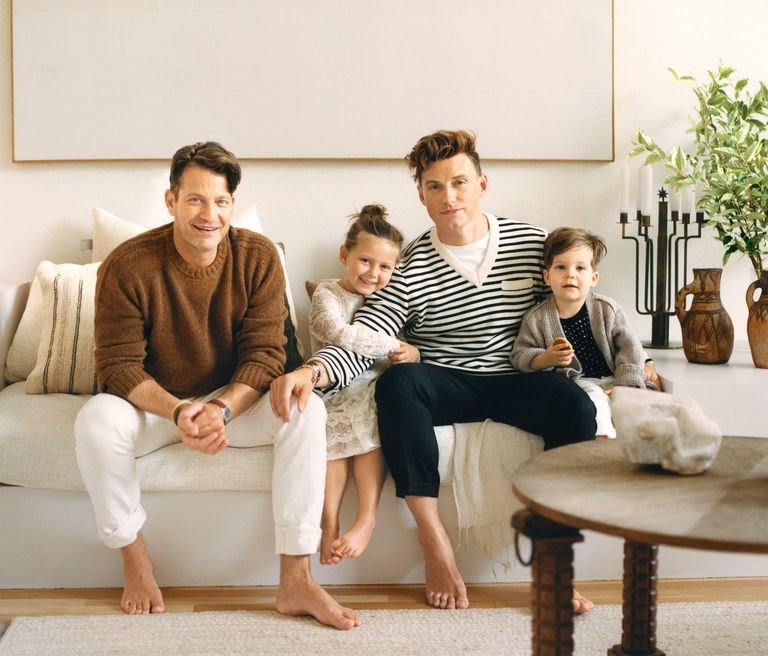 Nate Berkus and (from left) Poppy, Jeremiah Brent, and Oskar in the living room of their Montauk home. The custom plaster banquette has a cushion covered in a Perennials fabric; the painting is by Ethan Cook, the African pitchers are from Thos. Cornell Galleries, and the Jacques Adnet candelabra is from A La Mod.

But last year, when Berkus’s husband, designer Jeremiah Brent, suggested they check out a house for sale in Montauk, New York, as a second home for their family, Berkus was finally ready to explore the idea.

“I was raised in Southern California and lived on a lake outside of Minneapolis. The water has always been how I think of a carefree afternoon,” explains Berkus, who has been living in Montauk full-time since March with Brent and their children, Poppy, five, and Oskar, two. “I didn’t want my experience in the tsunami to deprive our family of summers like that.” 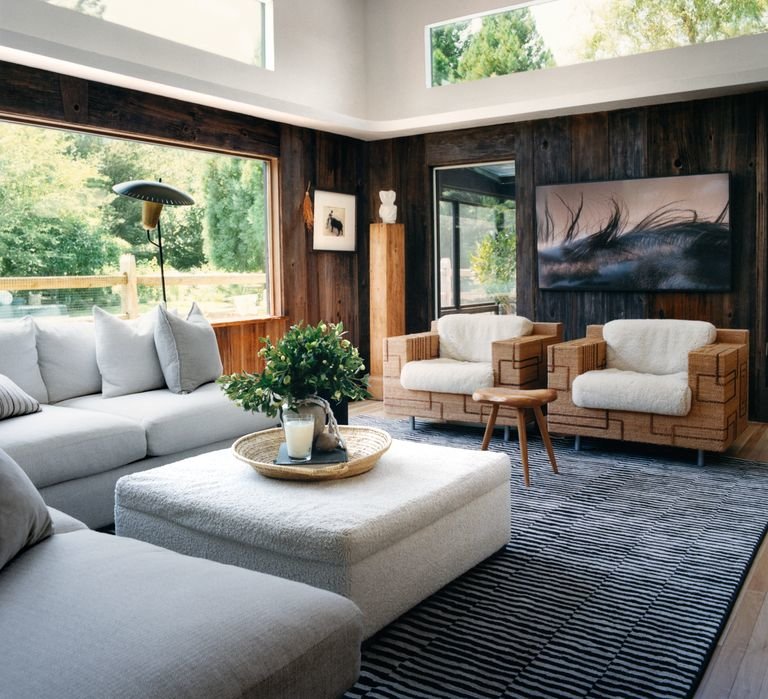 In the family room, the sectional, ottoman, and rug are all by Nate + Jeremiah for Living Spaces, and the 1970s rope chairs are from 4th Generation Antiques. The 1960s floor lamp is from Galerie Half, the 1950s stool is French, and the television above the chairs is by Samsung. The photograph is from the 1930s, and the sculpture is by Marina Karella.

In August of 2019, Berkus and Brent had just returned from three years in Los Angeles, where they had planned to stay longer until they realized how much they missed the hubbub of New York City. They had downsized from a Spanish Colonial spread in Hancock Park to a West Village townhouse and weren’t looking to purchase a weekend place. But the house in Montauk, previously owned by the photographer Raphael Mazzucco, proved difficult to resist. Residing on a nature reserve, the home, which was built in the 1980s and extensively renovated by Mazzucco, boasted a picturesque landscape, ample light, and numerous handcrafted touches. “Raphael built the fireplace in the great room out of beach rocks,” Brent explains. “The wrapped walls in the family room were from a dock that was being demolished.” 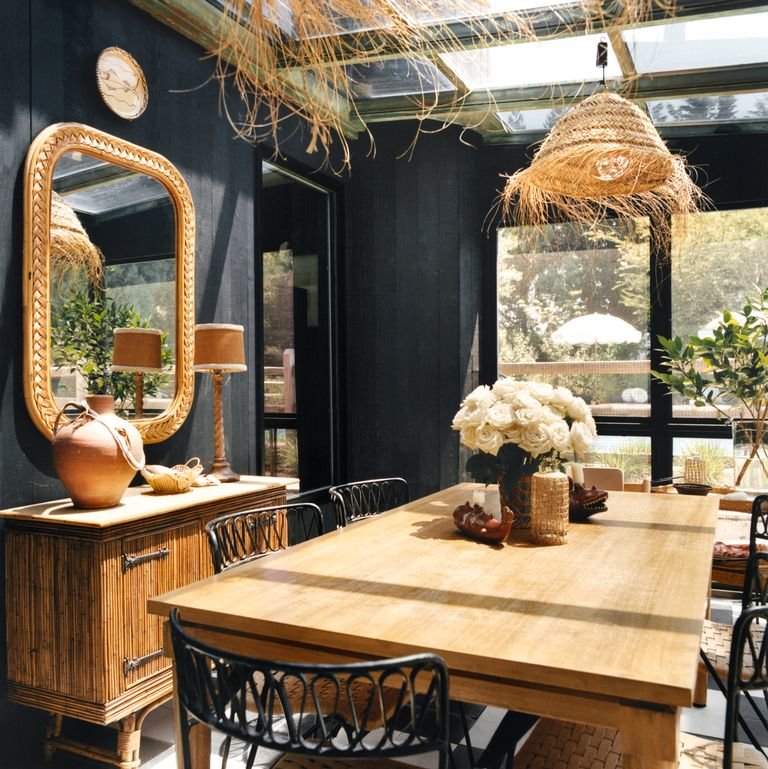 The oak table in the dining room was purchased on the RealReal, the 1970s ­rattan mirror and antique ­bamboo console are from Chairish, and the 1950s dining chairs and table lamp are from 1stdibs. The wicker bar cart and Moroccan jute lampshades are from Etsy, and the vintage fish candleholders belonged to Berkus’s late partner, Fernando Bengoechea.

The couple gave the house a renovation “face-lift,” as they characterize it. They painted the exterior black to ­contrast with the brightness within, stripped and sanded floors for added lightness, and redid the kitchen with plaster walls and white concrete countertops. An outdoor kitchen is now a screened-in dining area, and they created a back patio for lounging. Perhaps most crucially, they added 40 percent more native vegetation to the surrounding land.

Inside the house, Brent and Berkus stuck to a neutral palette and incorporated design details influenced by their trips to Portugal, Mexico, and Peru, where they got engaged in 2013. Down a hallway and a few stairs from the entrance is the great room with its 22-foot-high ceilings and the aforementioned stone fireplace, which the couple topped with a collection of antique terra-cotta bulls, Peruvian objects thought to ward off evil spirits. Much of the furniture here and throughout the home is from Berkus and Brent’s collaboration with the company Living Spaces, which they mixed with online finds from Etsy and eBay that are covered in performance fabrics. 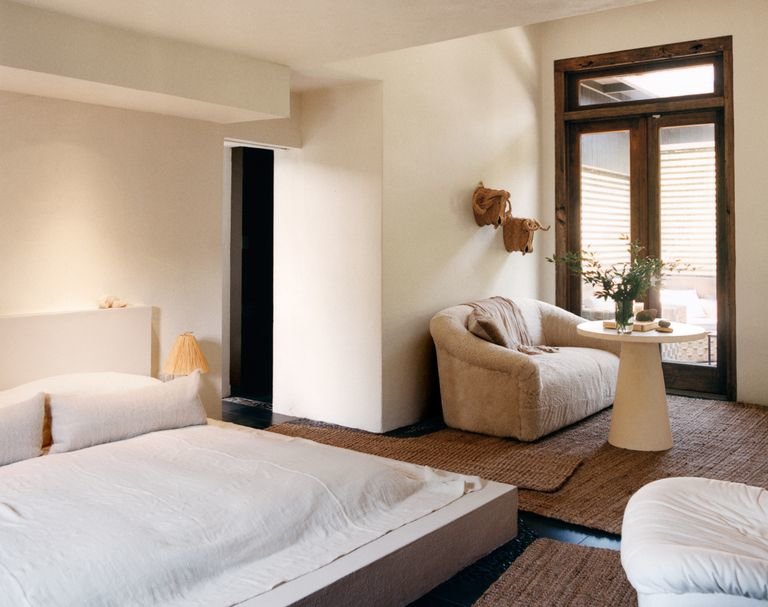 In the main bedroom, the bed is dressed with linens by Nate Berkus + Project 62 for Target and topped with a coverlet by RW Guild and RH, Restoration Hardware pillows. The table is by Leanne Ford for Crate & Barrel, and the artwork is by Javier S. Medina.

As a counterpoint to such technological textiles, the couple turned to wicker, jute, and other woven materials for an artisanal contrast.

In the wood-paneled family room, 1970s rope chairs with shearling cushions from 4th Generation Antiques in Pasadena add textural interest, while varied surfaces abound in the main bedroom on the second floor, where Berkus and Brent added a wall and pocket door to separate the previously open bathroom and sleeping areas. In the bathroom, they added a holly olive tree in an old limestone pot to go with the existing pebble-floored shower. 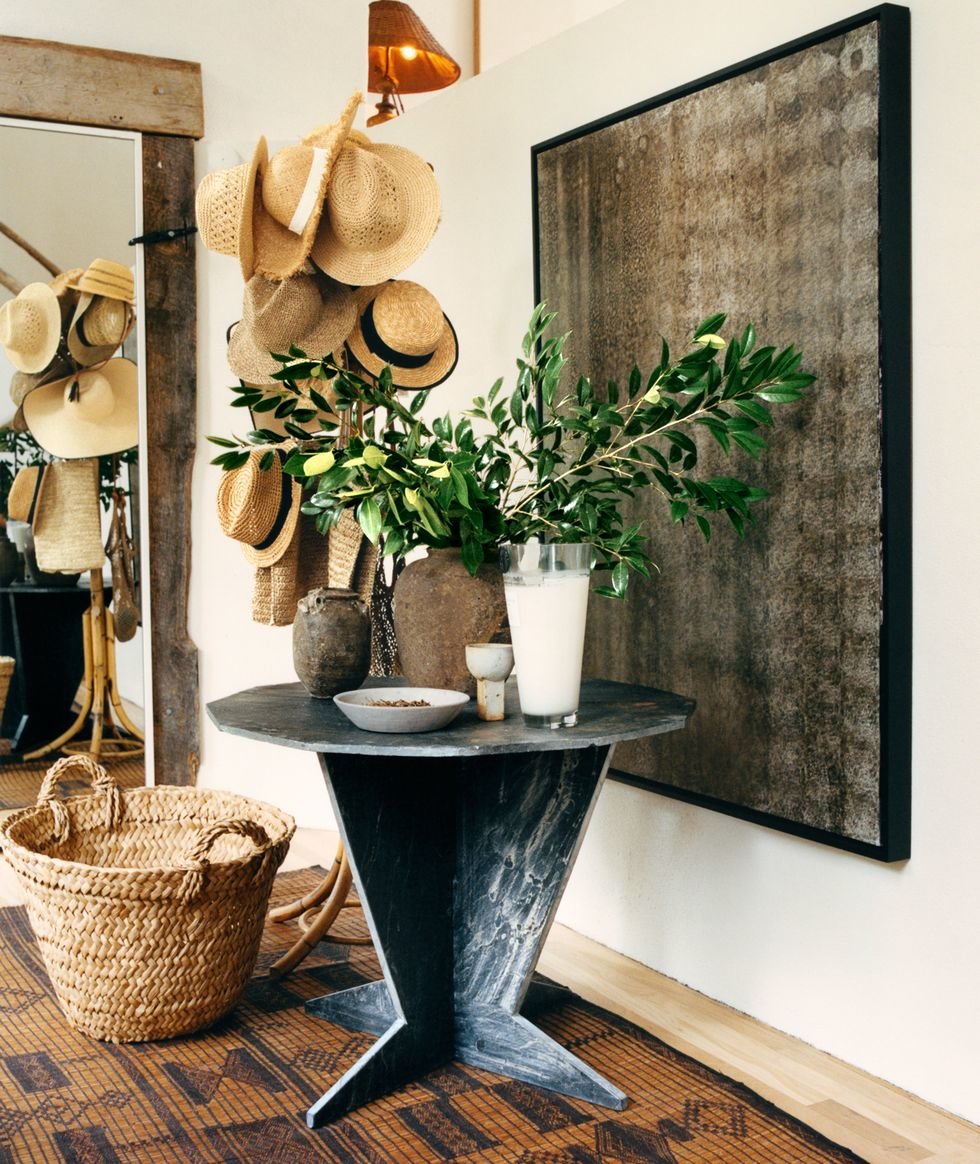 Entry The midcentury slate table is French, and the family’s hat collection perches on a 1950s coatrack by Pierantonio Bonacina; the basket is by Nickey Kehoe, and the artwork is by Simon Mathers.

“That was my worst nightmare when we bought the house,” says Brent of the stony surface. “But now we both love it. It is so relaxing.”

A deep sense of calm pervades the whole home, something Berkus attributes to his and Brent’s mindset when they approached the design process. 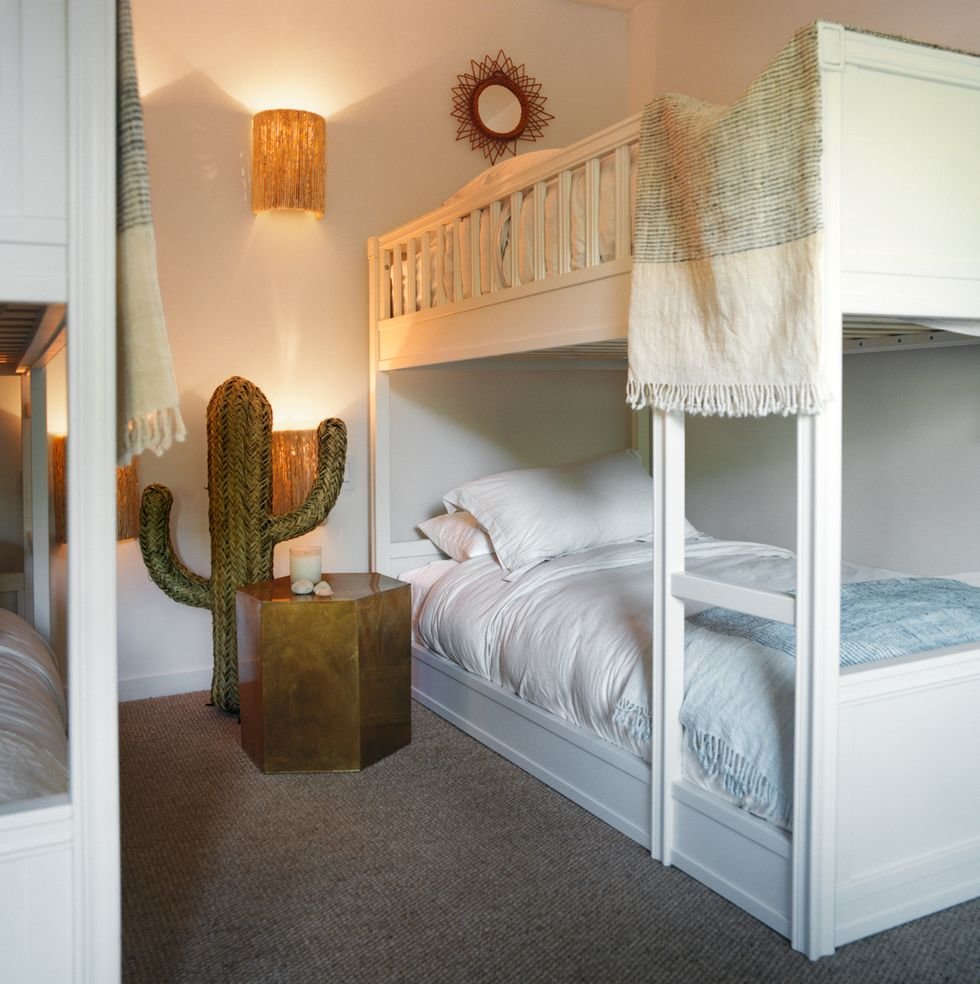 Children’s Room The bunk beds are by Pottery Barn Kids and the sconces are by Elk Lighting. 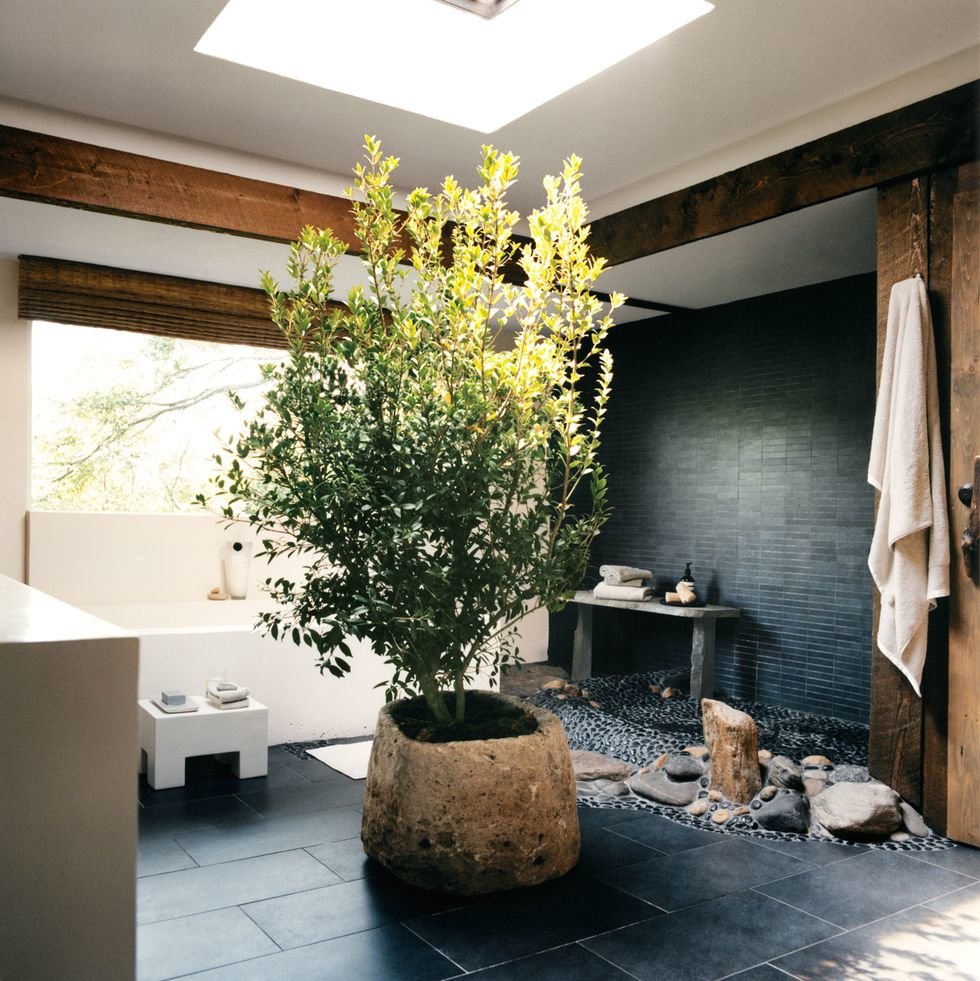 Main Bathroom A wood chair from Pasadena Antiques & Design is topped with towels by Nate Berkus + Project 62 for Target. 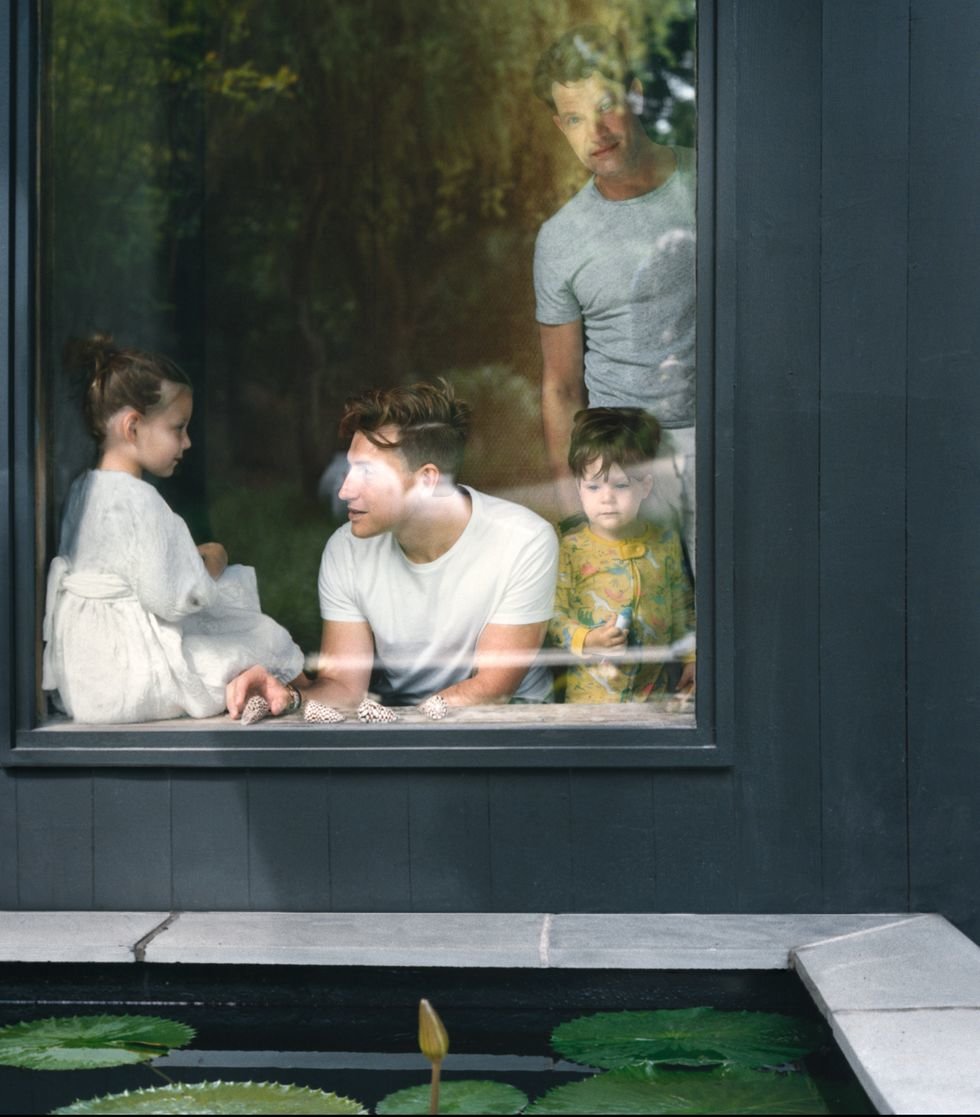 The Family Poppy, Jeremiah, Oskar, and Nate seen through a window of their home. Patio The Living Spaces armchair and sofa have cushions covered in a Sunbrella fabric, the dining table and vase are by RH, Restoration Hardware, the runner is by Amber Interiors, and the candles are by Pottery Barn. The dining chairs are by Article, the vintage side table is teak and ebony, and the cement floor tiles are by Clé. 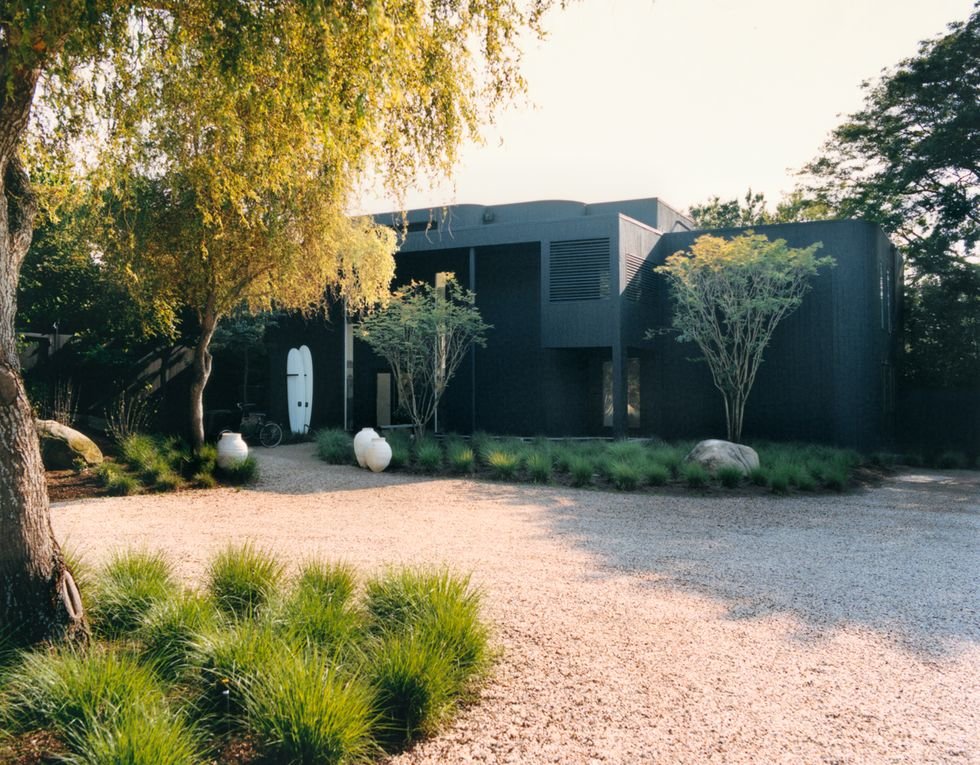 Exterior The black-painted exterior of the house, which the couple renovated with the help of contractor Paulette Davis. Brent teamed up with Shawn Eckardt on the property’s new landscape design, which focuses on native plants.