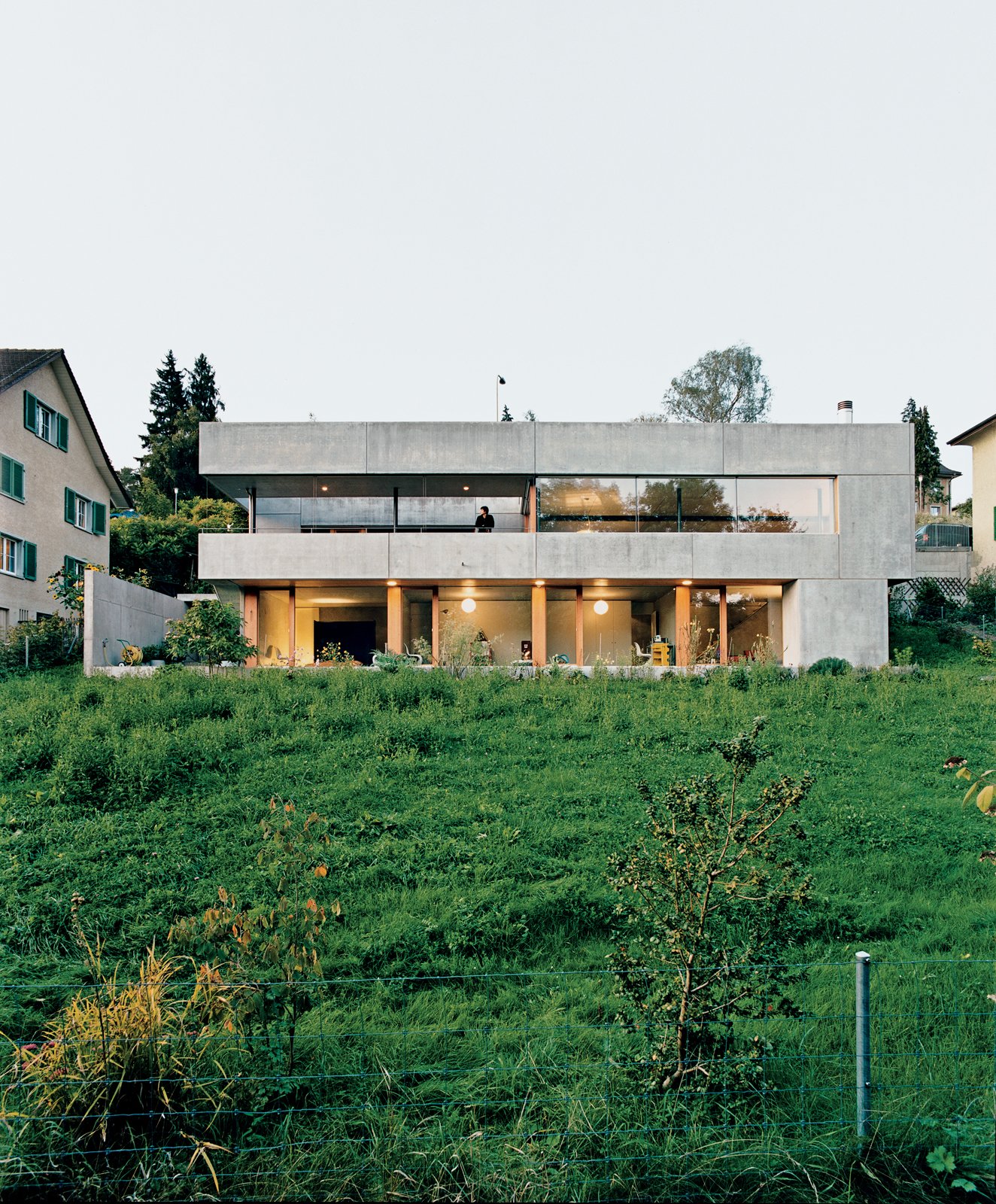 Built for a young family of Spartan-minded clients, architect Felix Oesch's spare, concrete prefab outside of Zurich is a marvel of clean living.

The house is located on the busy Schaffhauserstrasse, which links Switzerland to Germany, and therefore part of Oesch's brief was to reduce noise and orient the building toward the nearby Rhine. 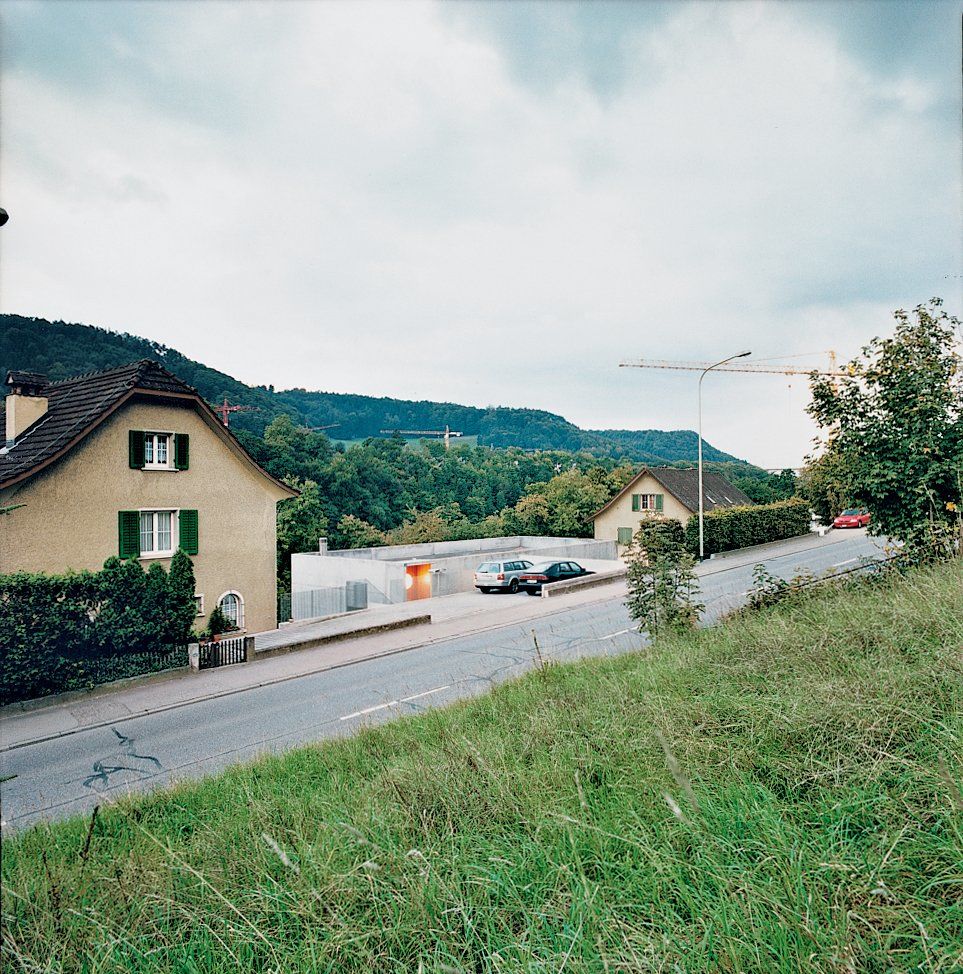 Meili and Anais lounge on a Transform sofa by Moroso. 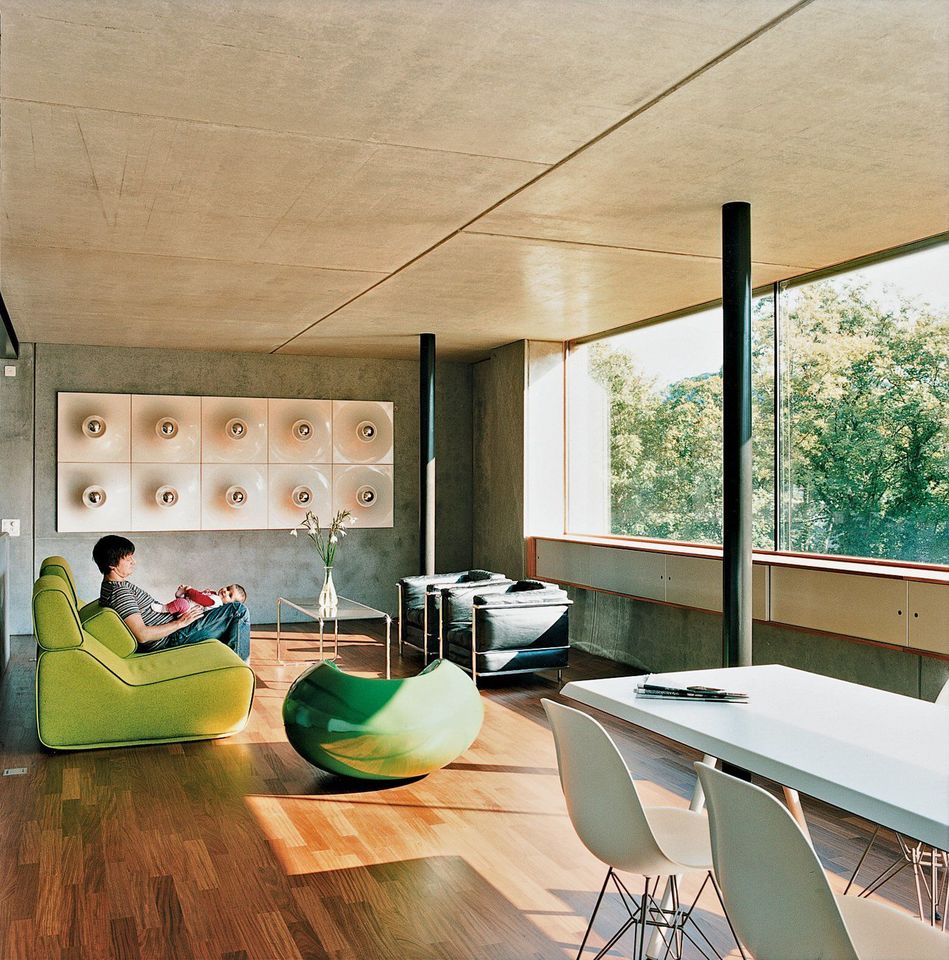 The office includes the Living Tower designed by Verner Panton for Vitra. 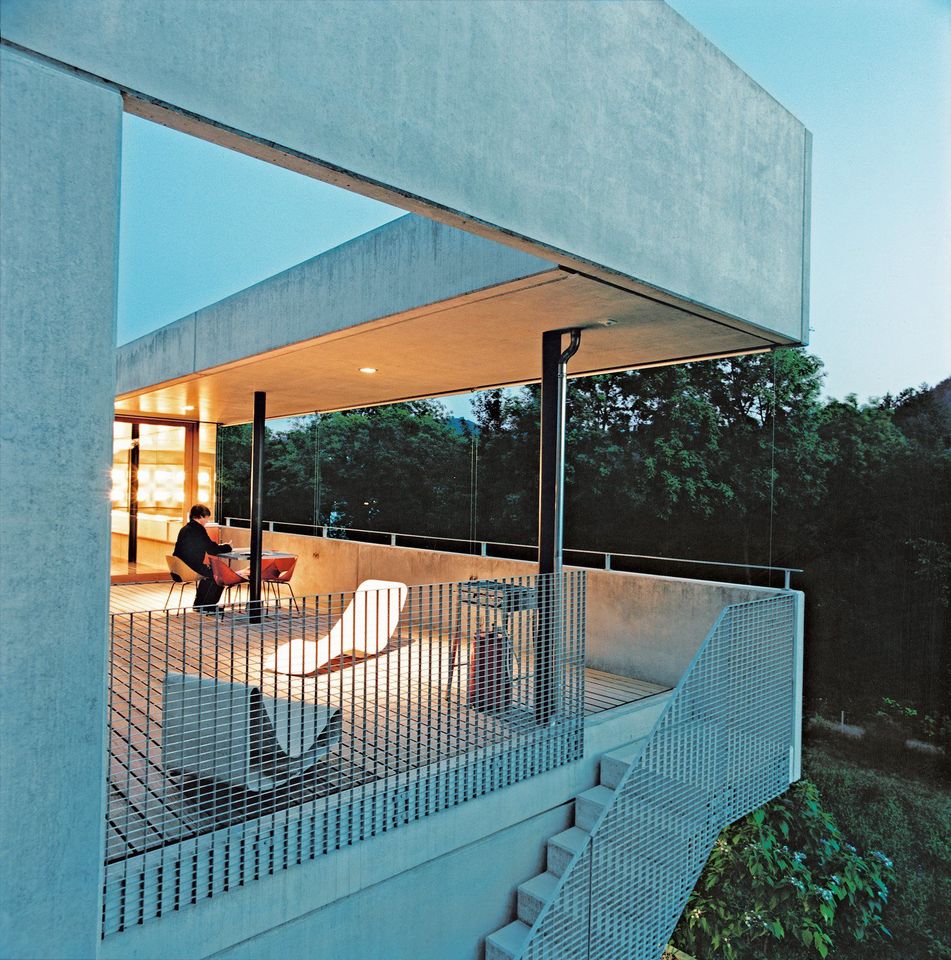 For a nation of only 7.5 million, Switzerland has always punched well above its weight in terms of design. During the interwar years, the "Swiss Style" played a pioneering role in contemporary graphic design; today Swiss furniture manufacturer Vitra leads the pack, and the likes of Herzog & de Meuron and Peter Zumthor reside at architecture’s bleeding edge. Of course, the country was also the birthplace of Charles-Édouard Jeanneret, or Le Corbusier, as he’s better known.

It’s impossible not to think of Corbu as I step out of the car and on to the driveway of Christof Meili and Farzaneh Moinian’s home. Although only two years old, it owes a significant debt to the godfather of modernism, as its architect, Felix Oesch, is happy enough to confess. "There was never a discussion about style," he tells me. "When Christof and Farzaneh told me one day that they’d seen the Petite Maison, then for me it was clear. My design would fit." 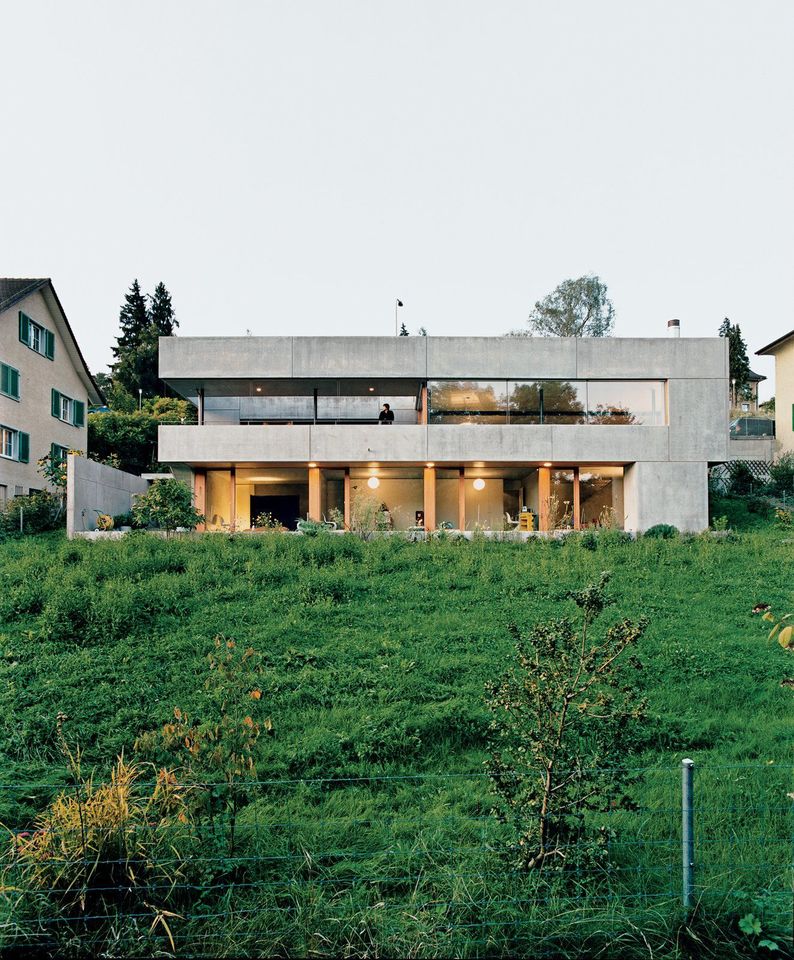 The house is a short walk from the center of Eglisau, a small town 20 minutes from Zurich Airport, on a slope between the bustling Schaffhauser-strasse, which links Switzerland to Germany, and the Rhine. The manner in which the house functions is largely dictated by its locale. The architect’s job was to reduce the noise from the road and orient the building south toward the beautiful, almost emerald green river. However, its look was a more personal choice and perhaps betrays the couple’s roots in design and architecture. Meili trained as an urban planner before becoming an IT consultant, and Moinian is an industrial designer, working on projects such as the Transrapid system for Deutsche Bahn and interiors for Swiss International Air Lines when not looking after their 14-month-old daughter, Anaïs. The pair, who met when their companies shared an office space, commissioned Oesch after seeing one of his houses in a Swiss design magazine. 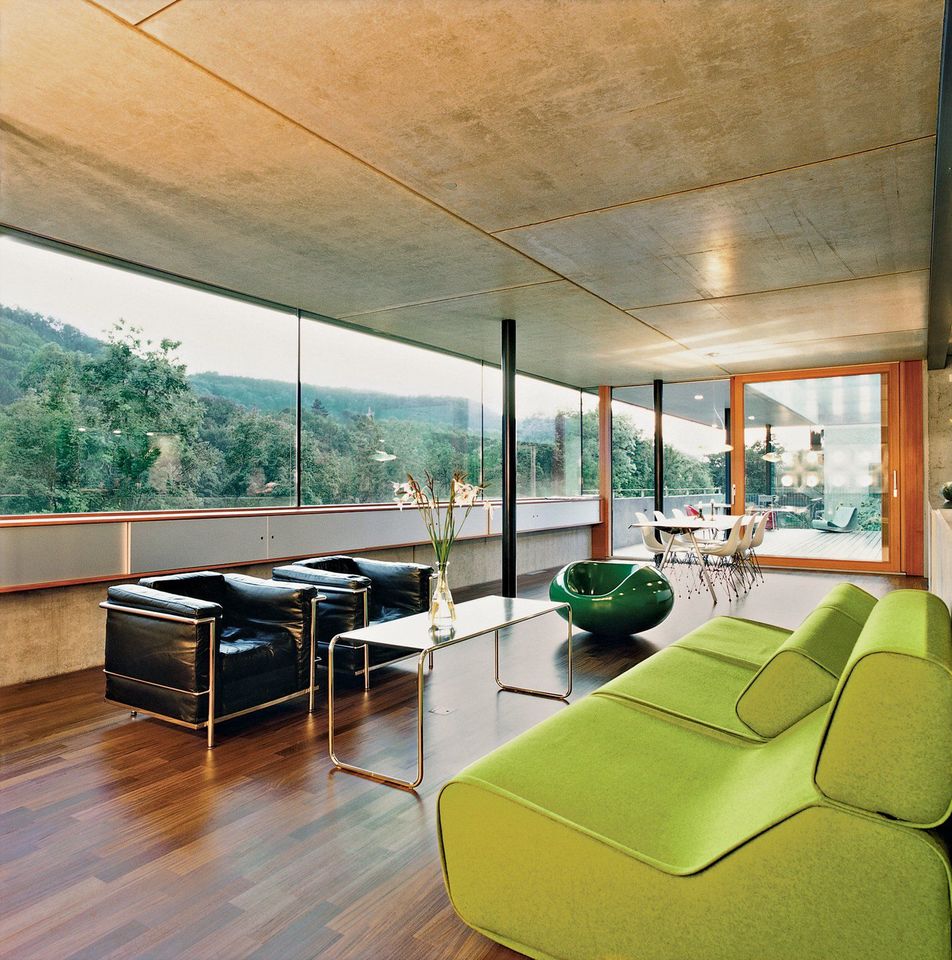 As all four of us sit down for an impromptu barbecue, it’s plain that aesthetically both architect and clients sing from the same hymn sheet. "We were really lucky," confirms Meili, "because Farzaneh and I have the same taste. We both wanted a modern, minimal concrete house." Handy, because that’s precisely what they got.

Descend a flight of steps from the parking area and open the heavy larch timber entrance door, and you arrive into a huge kitchen, dining, and living space that Oesch describes as "a strange kind of church," and which provides a panoramic view of the Rhine and neighboring woods. The link is a partially covered deck, where we’re currently sitting, that allows the family to eat outside even when it’s raining. 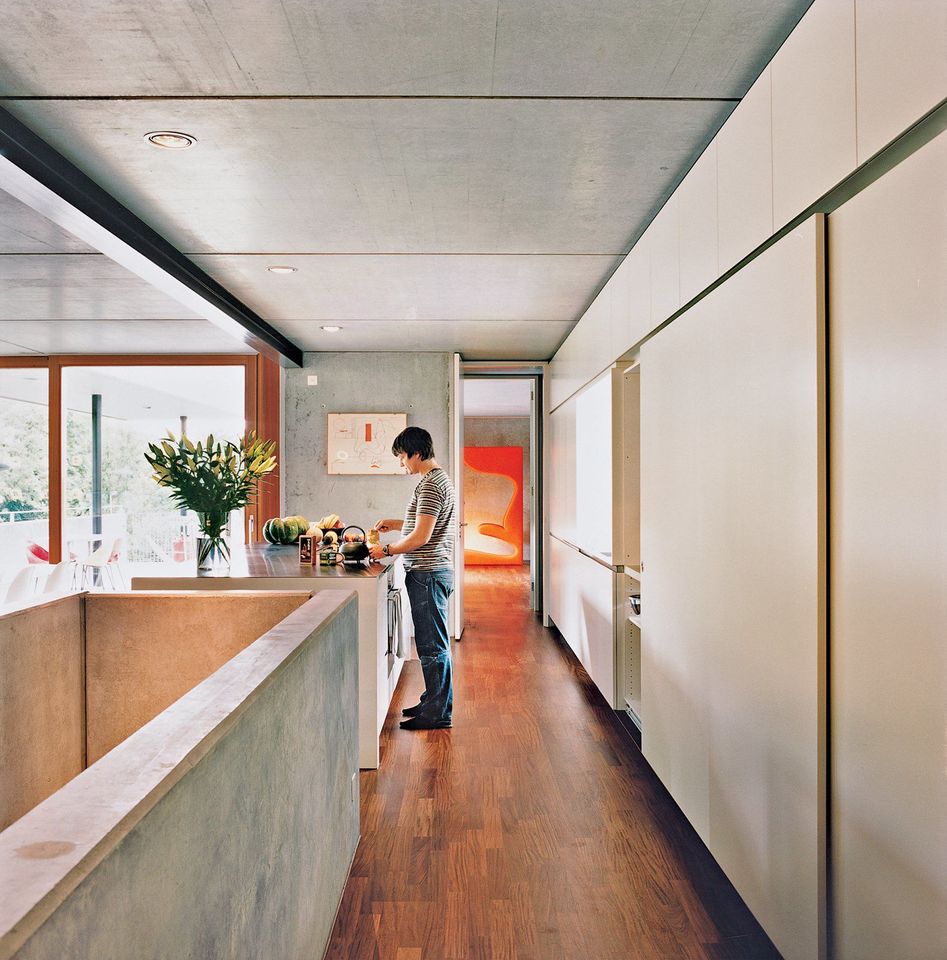 Down the banisterless stairs, there is a second living room as well as two decent-size bedrooms-one for Anaïs, the other presently spare-and a rather intriguing bathroom, intriguing because it’s a mirror image of itself: A pair of toilets sit side by side, and there are two sinks and a pair of showers. It can be left as one linear space or divided by a sliding door, presumably for when their daughter begins to demand some privacy. "We wanted it to have the feeling of the length of the house," says Meili. Natural light comes in via a letterbox-shaped window that runs the length of the outside wall and another slot window that allows you to look out into the garden as you’re having a bath. It’s a nice touch. Last, but by no means least, is an understated master bedroom furnished with a storage cupboard, a double futon bed, a mirror, and not much else. 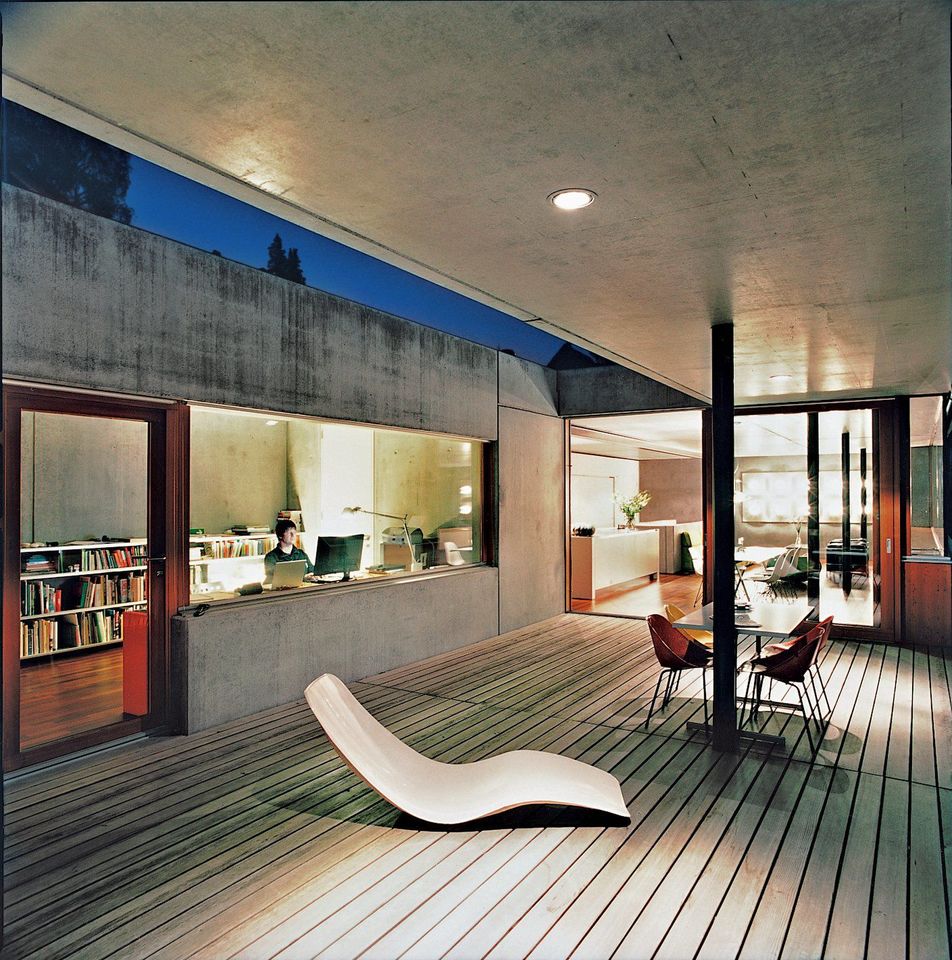 Though the house is pristine, the garden, somewhat surprisingly, has a rougher feel to it. Judging from the couple’s taste in cool minimalism one might be forgiven for expecting their lawn to resemble the 18th green at Augusta. However, this is a family that enjoys the outdoors. They regularly swim in the Rhine after work (which explains the outdoor shower) and the kayaks hanging by the log pile allude to Meili’s competitive background in the sport. So perhaps their slightly unusual agreement with a local farmer makes sense: When the grass is ready and the wildflowers are out, he brings a flock of his sheep to graze, and the gardening is thus done easily and organically. Oesch explains the reasoning behind this: "I didn’t want to change the landscape. I wanted the house to look like it’s always been here."

Which of course it hasn’t. In fact, it took nine months to build the house using a prefabricated panel system developed by the German manufacturer Syspro that’s more commonly used for building cellars rather than entire houses. Each panel is made up of two outer layers of 2.4-inch-thick concrete, which act as the bread of the sandwich. Inside there’s a core layer of concrete as well as seven inches of insulation. This means the panels, which arrived onsite with all the holes cut for the fixtures and fittings, are relatively light and easy to maneuver. Subsequently, construction was a question of fitting them all together like pieces of Lego. 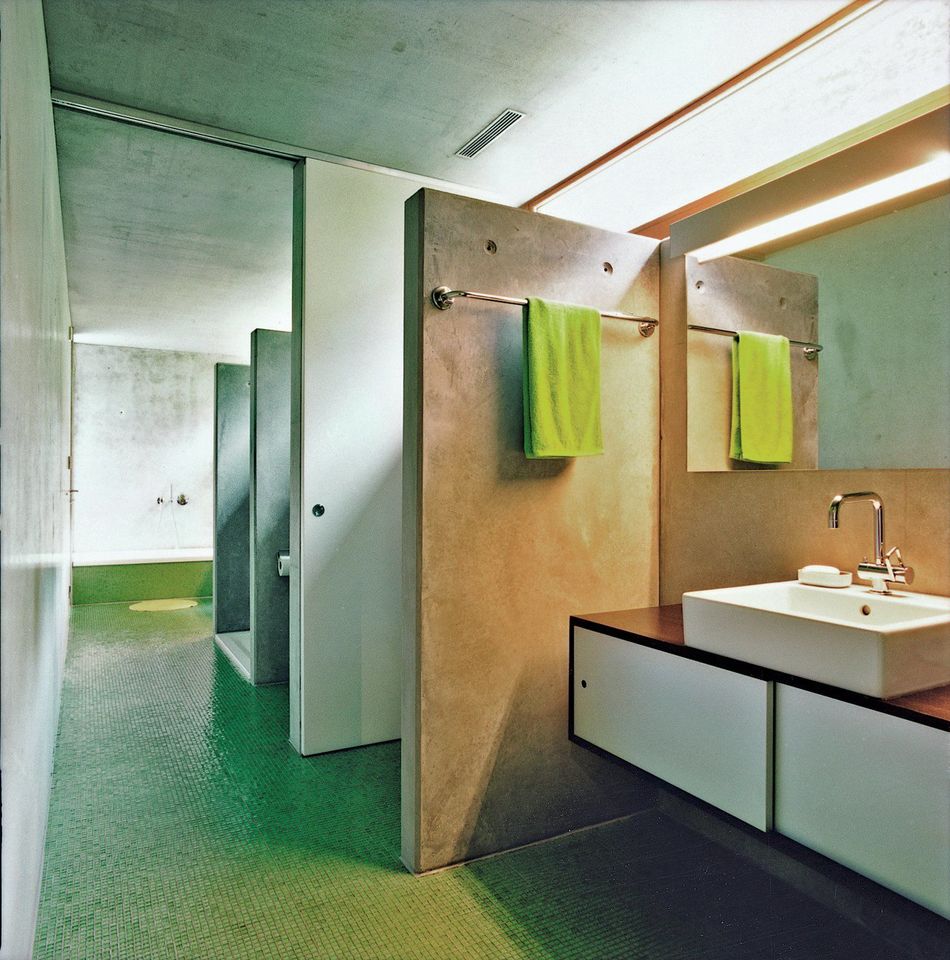 The house is also hugely efficient. Geothermal energy for hot water and under-floor heating (which negates the need for ugly radiators) is provided by a pair of 300-foot-deep boreholes that transfer warmth from the ground to the house through a heat pump. Meanwhile, used air is taken out from the bathroom and kitchen and pumped back into the earth, effectively storing its energy for a later date. Heating and cooling air is pumped into every other living area of the house. Elsewhere, the concrete flume on a fireplace in the downstairs living room provides some thermal mass for the whole house. All told, this is a remarkably inexpensive house to heat. In fact, the architect jokes that the huge light sculpture, made up of two rows of bulbs, hanging from one of the walls in the main living space uses as much energy as the rest of the house put together.

Wandering around, two things are instantly clear: This is a couple who loathe clutter and have a passion for contemporary furniture. The house is littered with design classics-Verner Panton being a particular favorite. Even the miniature furniture in their daughter’s bedroom, which has been in the family for two generations, has a touch of Jean Prouvé about it. And there’s absolutely no mess. To live like this takes a good deal of rigor and plenty of storage. Look around and everything has crisp, clean lines.

In the kitchen, for instance, the stove’s extractor hood is hidden, only popping up from the counter when it’s required.

Naturally, I’m intrigued by how the relatively recent addition of Anaïs has changed the way they live. Is it possible to have a young child and maintain this level of super-tidy minimalism? "Life is just different in general," shrugs Moinian, seemingly unfazed, "and I’m not working all the time now so that’s different as well." "I think we won’t have a big playing area," Meili chips in. "We really like a minimal space." And while they’ll almost certainly have to make adaptations when their daughter starts toddling, I’m inclined to believe them. 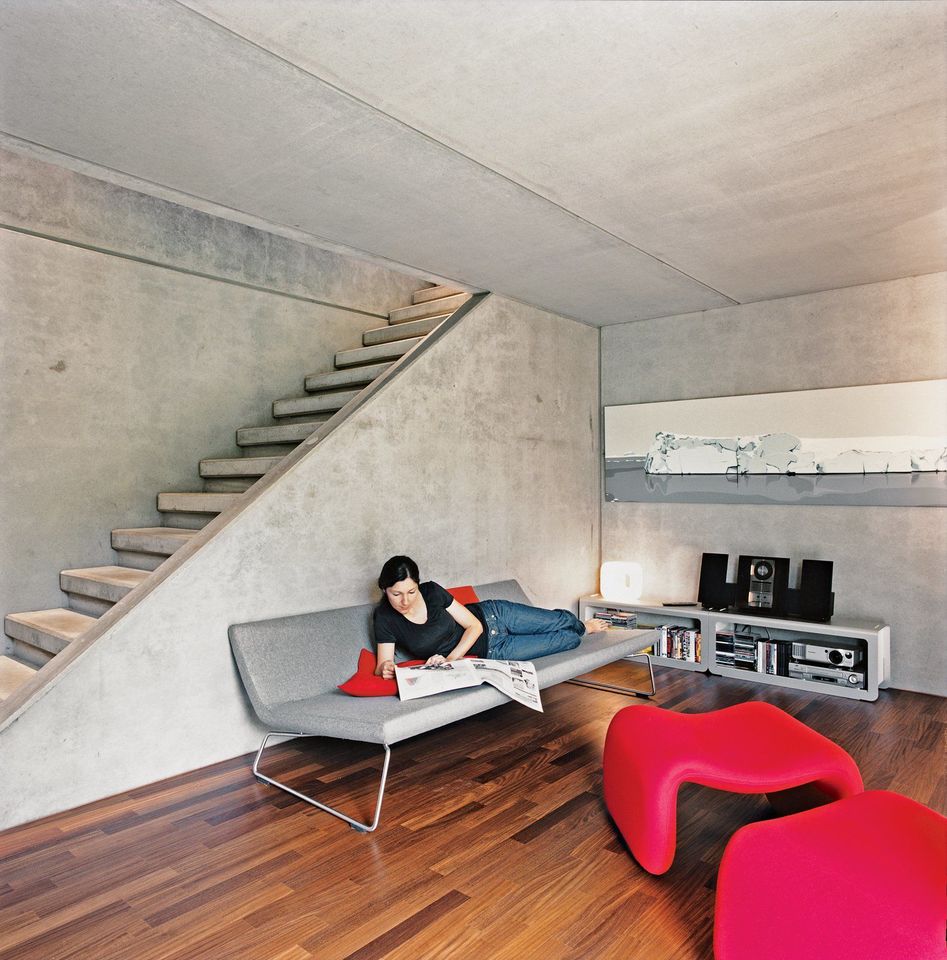 The relationship between architect and client can be extremely fraught in a major building project, yet if there were any problems during this process then it’s almost impossible to detect as our meal draws to a close and we go for a walk around the chocolate box–beautiful town. In fact it would seem the scheme has turned clients and architect into firm friends.

As I make my way back to Zurich airport in Oesch’s pickup truck, it strikes me that for all the concrete and iron discipline, the neat trick they’ve pulled off is giving a house that in the wrong hands might have turned into a museum piece a sense of warmth.