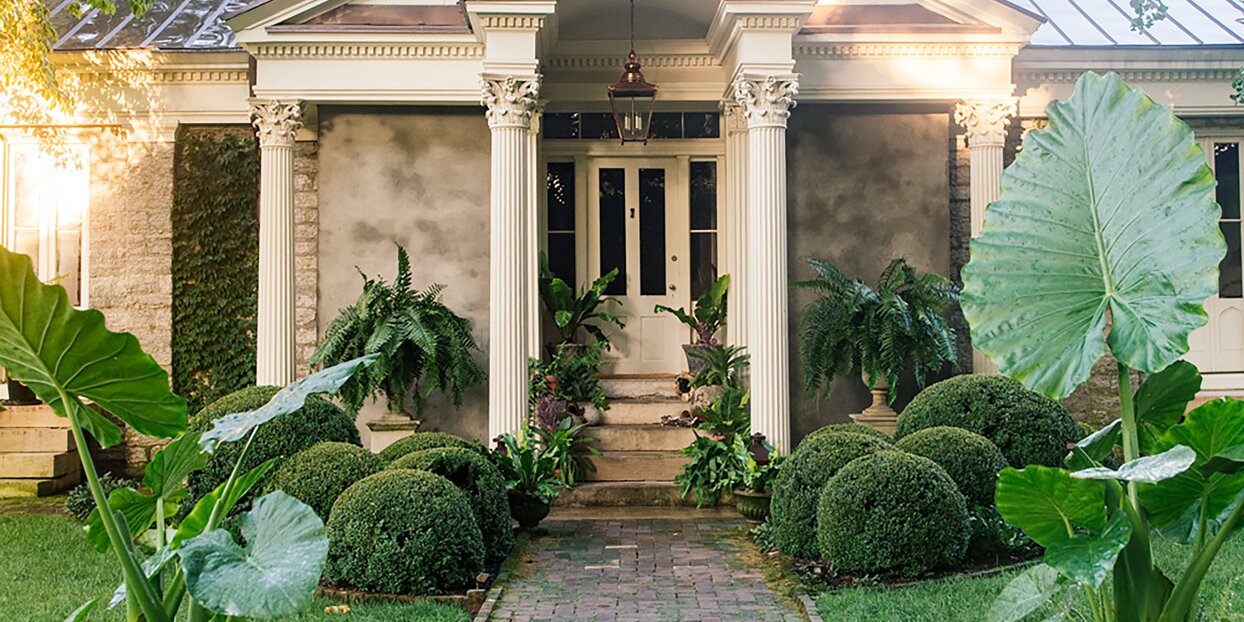 Southern Charm Radiates From This Restored Kentucky Home Inside and Out

Never underestimate the power of love at first sight. Jon Carloftis was a college student looking to pick up a few bucks from a bartending gig when he stepped through the columned portico of the "Taj Mahal" of Lexington, Kentucky-an 1851 Greek Revival house named Botherum by its original owner, banker and Abe Lincoln confidant Madison C. Johnson. "I walked into the drawing room and looked up at this medallion-crowned arched plaster ceiling-it had to be 18 feet tall-and I decided then and there that this house would be mine one day."

That day, it turns out, was a good piece down life's winding road. Jon set out for New York City, where he accumulated dirt under his fingernails and celebrities in his social circle as he pioneered the fine art of rooftop garden design. For more than two decades Jon's star rose, and Botherum's fell-into a sad state of disrepair.

The genteel old home had bars on the doors, boards over the windows, and a legion of frightfully ill-mannered raccoons staking claim to the basement when Jon's phone rang in 2012. 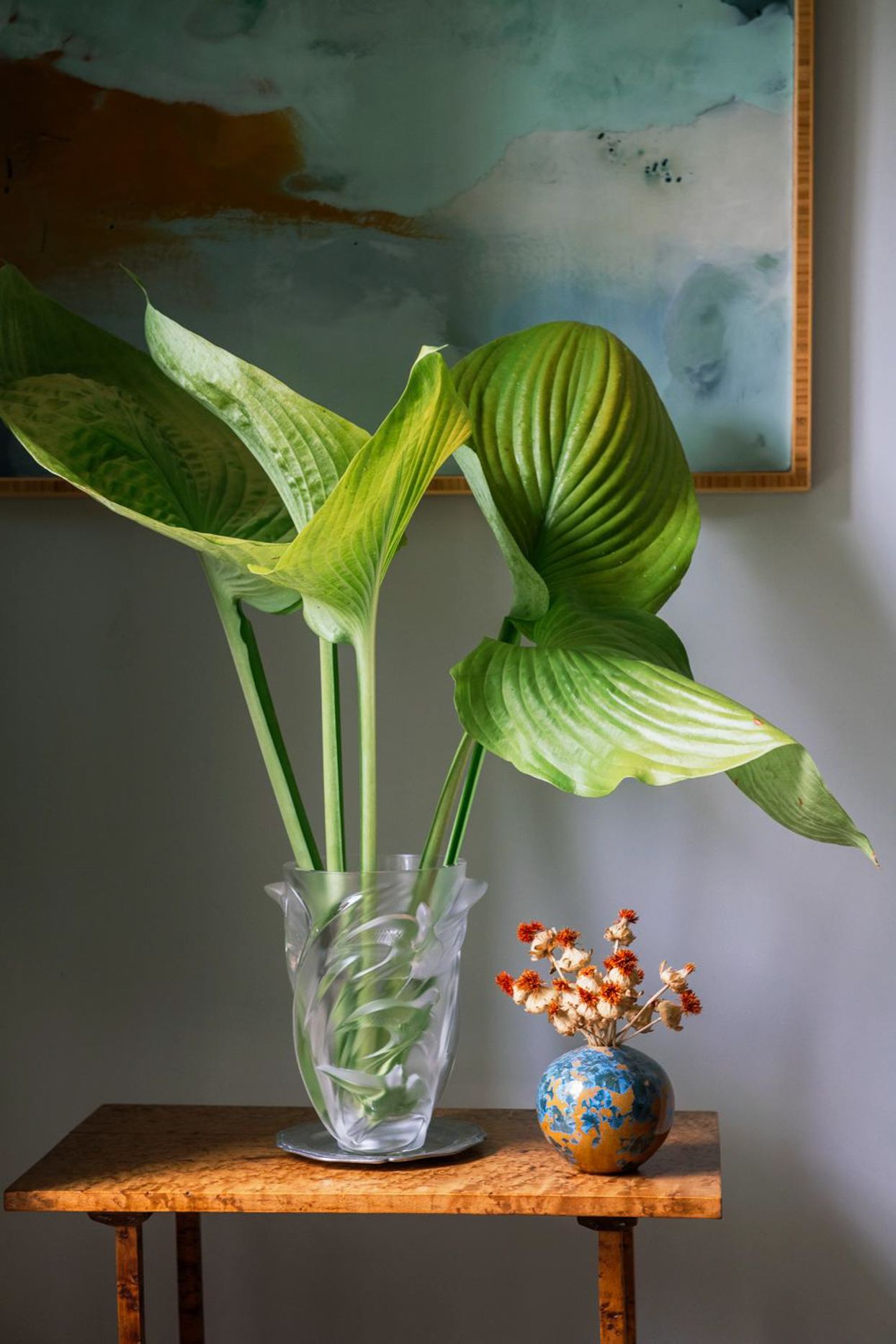 And he wasn't going to waste any time doing it. "People thought it would take me six years to restore this place," Jon says. "It took a year and six days. My clients joke that I'm president of the Git 'er Done Club."

Out went the dregs of neglect-and the raccoons-and in came a return to Southern charm, both inside and out. 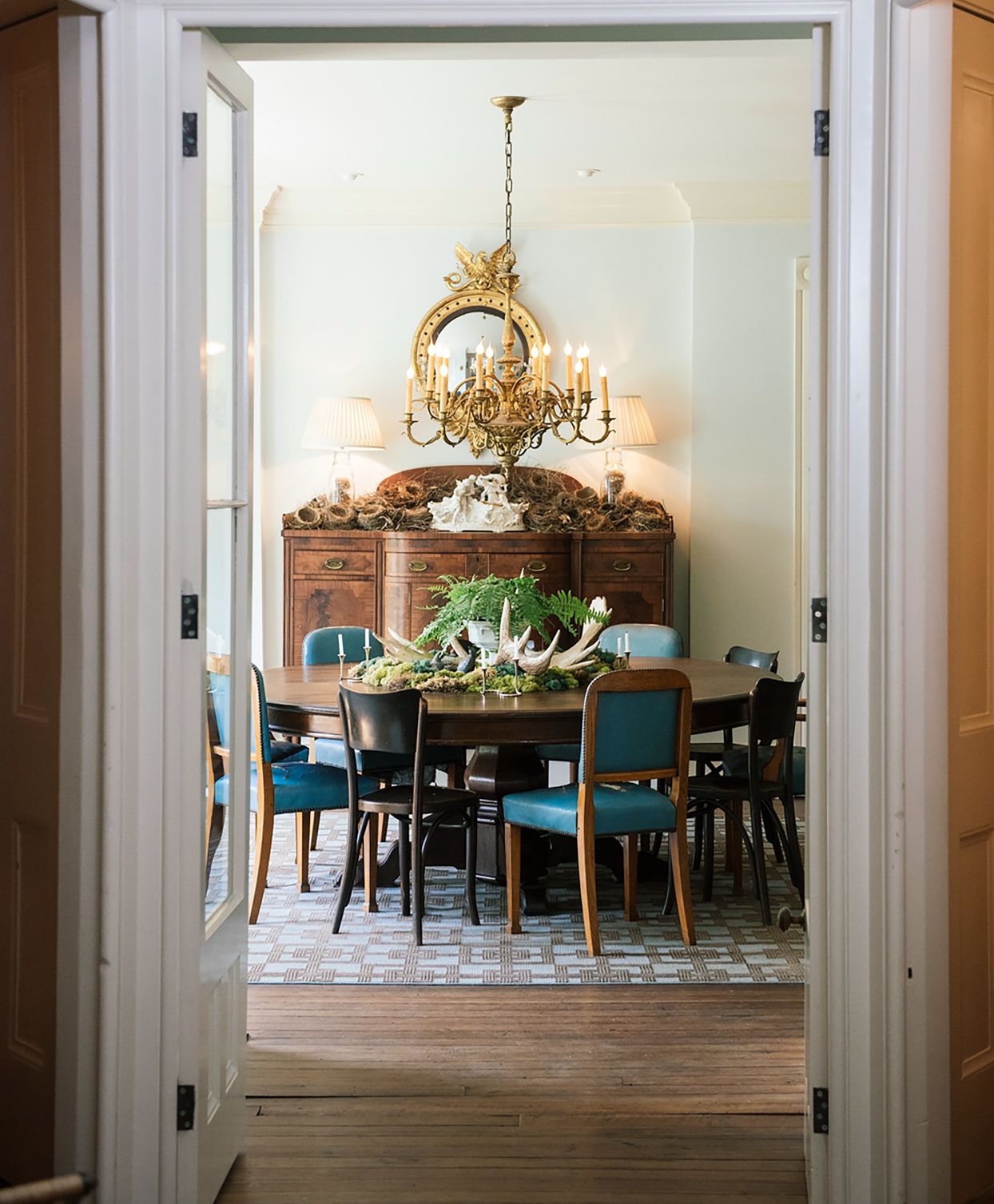 Jon outfitted rooms with a mix of antiques, vintage family pieces, and new furnishings that are all about comfort not pretentiousness. "I hate going in a house and feeling like I need a powdered wig and a fan," he says. "I want people to feel at ease, to have a good time."

In the dining room, an 1872 table from a Philadelphia hunt club is ringed by unpretentious 1950s chairs once used in a bank. "I love that blue-and that they're ripped apart. I keep them that way. It lets people relax, just like a round table makes everyone feel equal."

Original architect John McMurtry gave Botherum (lore says the home's name comes from a character in a Henry Fielding play) beautiful bones that set the stage for gracious Southern living. "The piano is a 1904 Knabe, a gift from my momma," Jon says. "She was going to get me a Steinway, but I said, 'Momma, black doesn't go with my colorway.'" 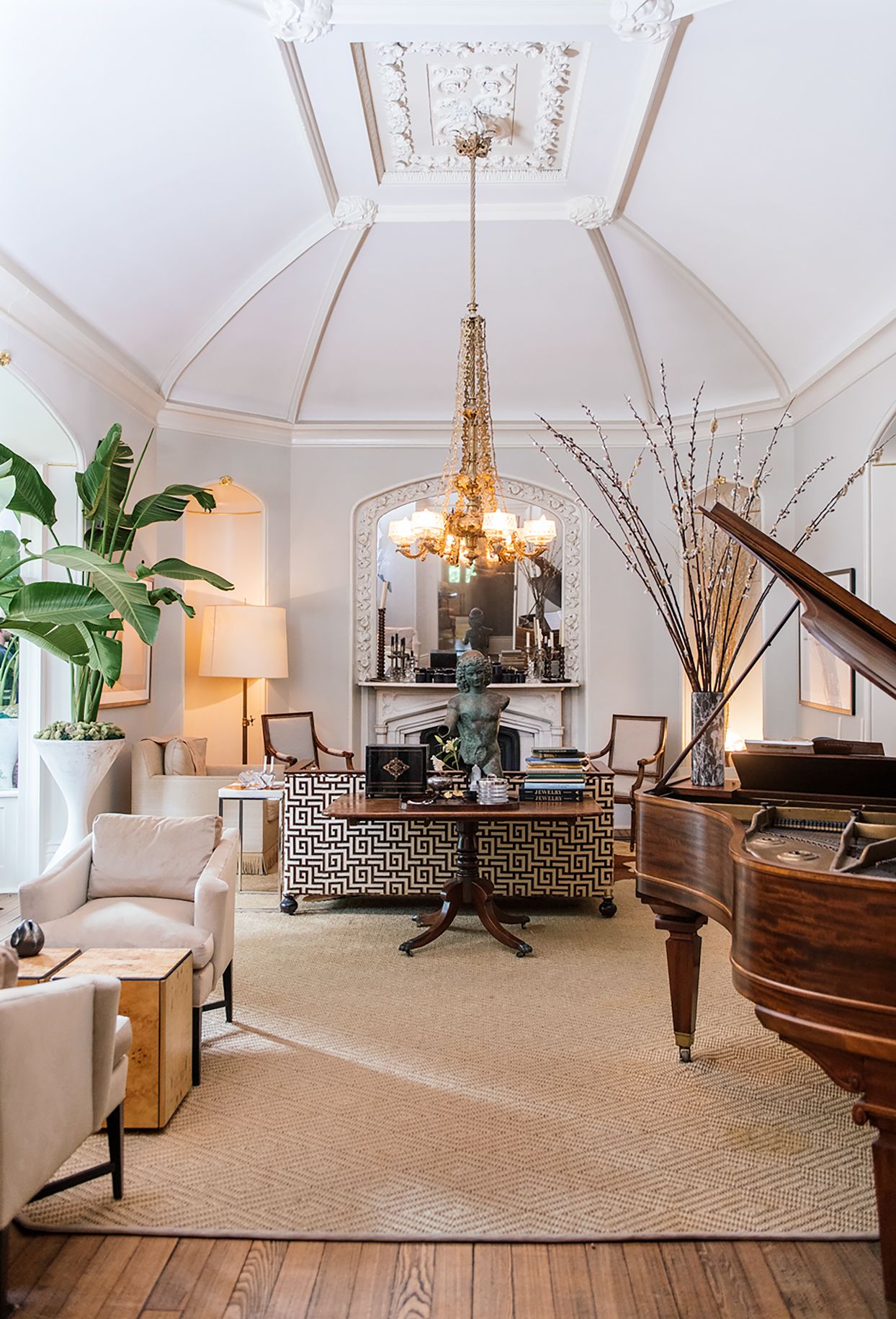 A bay window nook offers an inviting perch to take in the pleasing symmetry of the foursquare garden with its neat rows of boxwood, graceful arches of arborvitae, and wood benches that beckon visitors to venture out and take a closer look. A 1930s settee offers a cozy seat framed by bird-of-paradise planted in vintage Willy Guhl containers.
formal garden 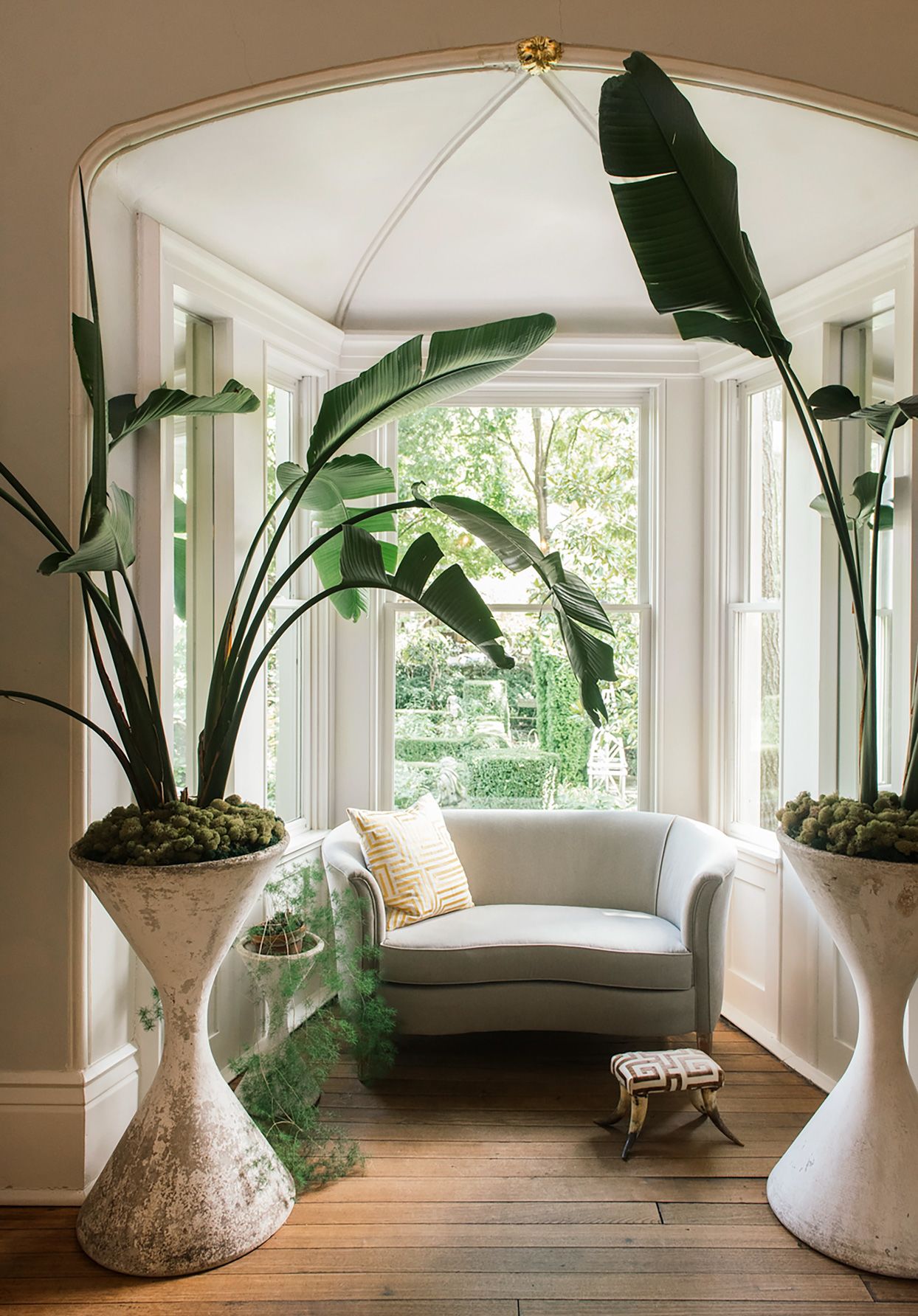 While guests relax, Jon-ever the Southern gentleman-treats them to cool drinks, fresh bites from his vegetable garden, and glorious views. "No matter where you are, there is a little tableau," he says. "People are inside 95 percent of the time, so it's important to create a garden that looks beautiful from each room of the house."

Jon found a photo of the property's earlier boxwood knot garden and re-created it. "There's lots of green, lots of texture," he says. "Texture looks amazing even in winter. A garden has to have structure. Flowers are the bonus." 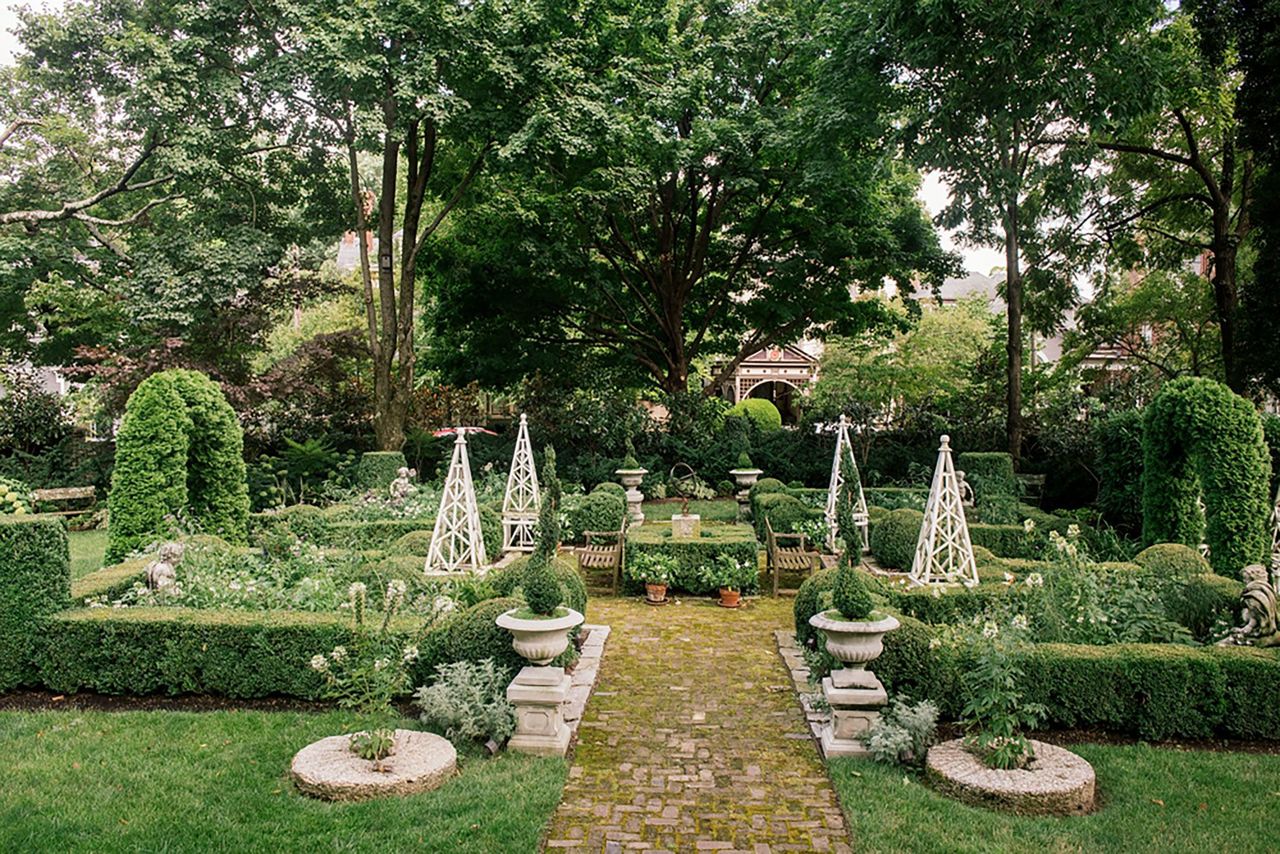 Just outside the front door, a cushioned swing dangles from the stalwart branches of the "Henry Clay tree"—a gingko, arguably the largest in Kentucky, that the famed statesman gave to the original property owner before the house itself was even built. "I'd have bought this place for the tree alone," Jon says.

The kitchen offers glimpses of the walled parterre garden, lush with neatly clipped boxwoods. A few steps away, the vegetable garden gains visual interest from pyramid-shape tuteurs, which act as jungle gyms for climbing plants, and an old white-painted potting shed that Jon moved with a giant crane. Now, instead of being relegated to a far corner, the shed is a focal point that discreetly blocks views of neighboring downtown condominiums. 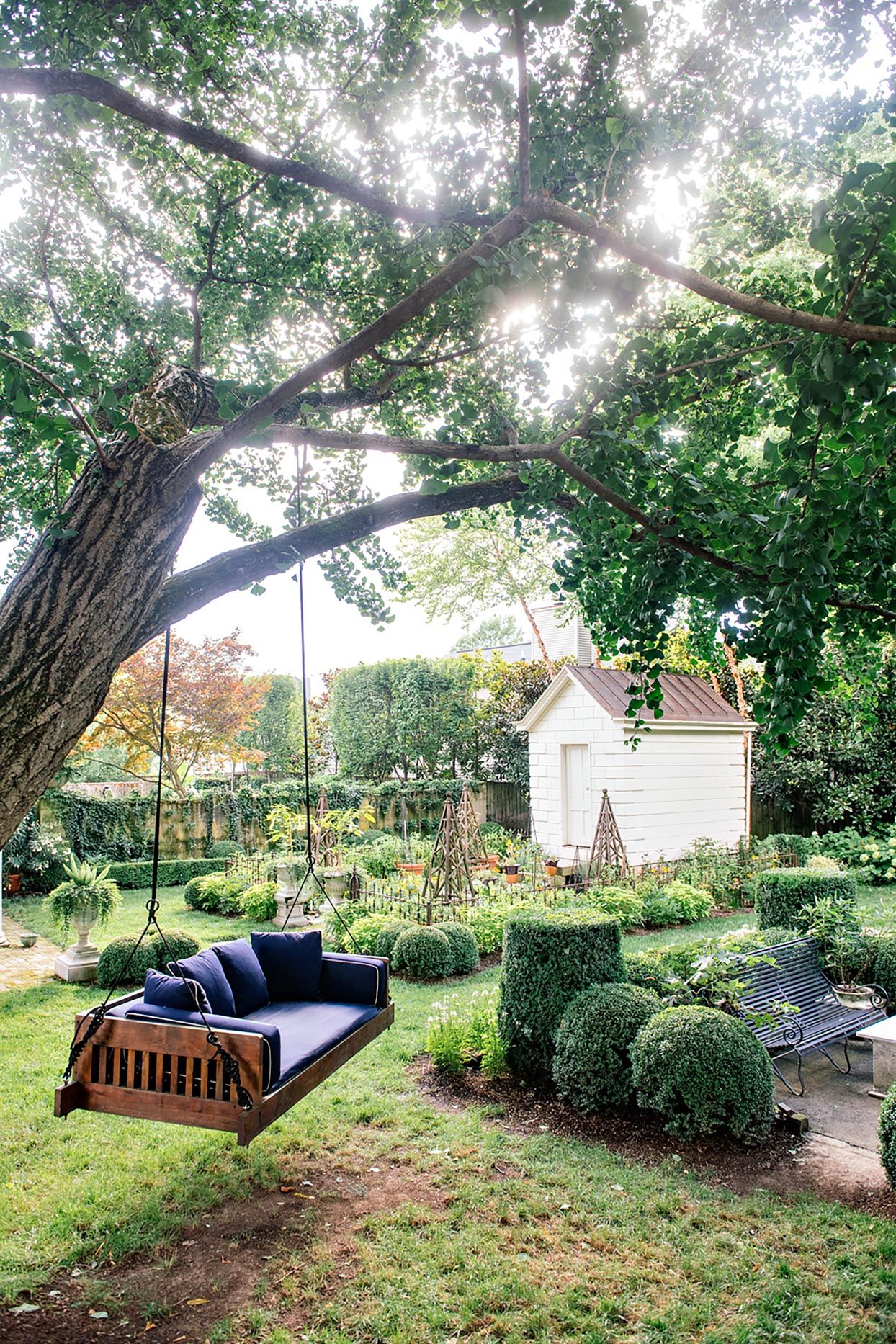 An old limestone pedestal topped with a terra-cotta pot serves as the centerpiece of a garden space defined by boxwoods, including the tall 'Green Mountain' variety. A 'Bloodgood' Japanese maple adds color. 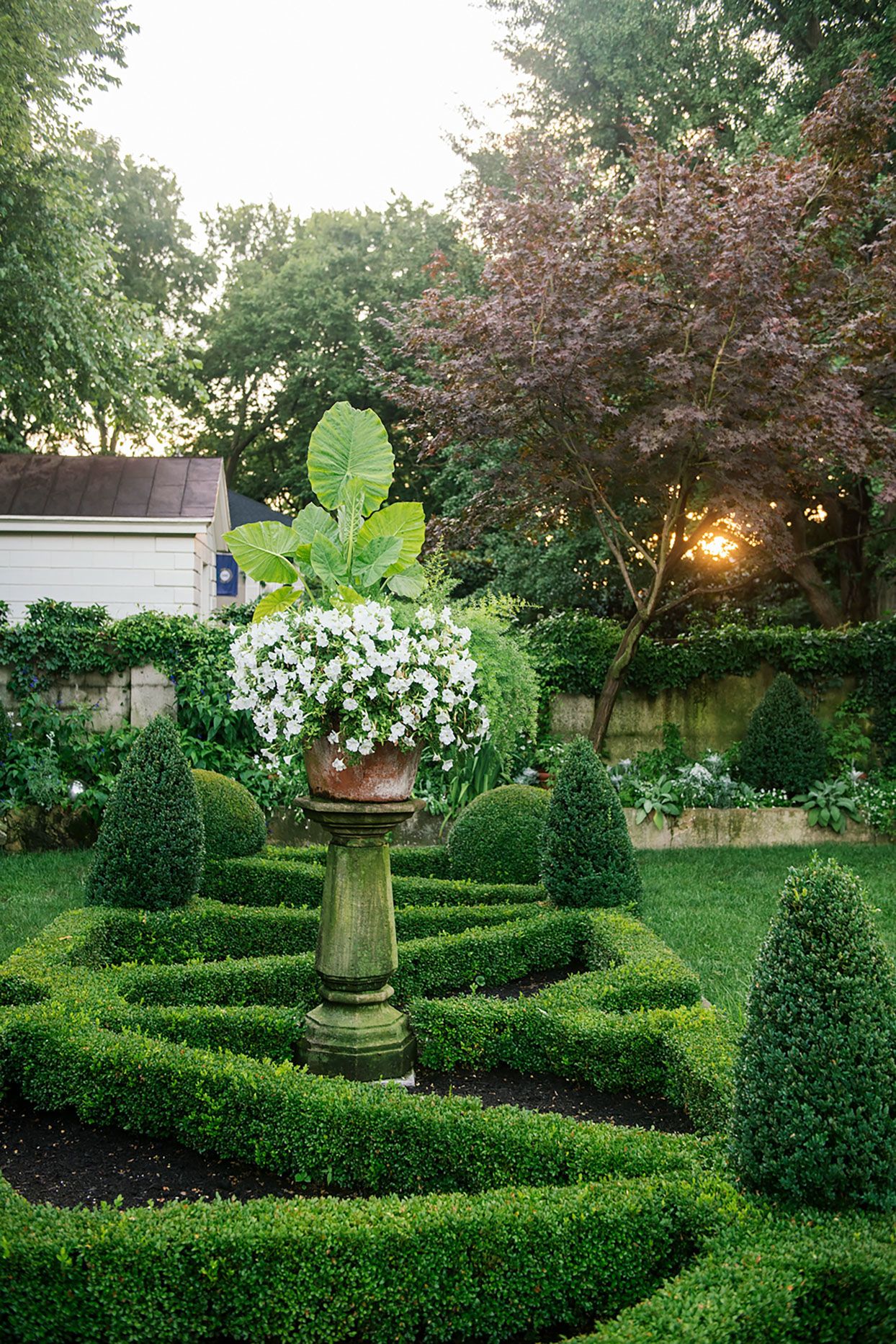 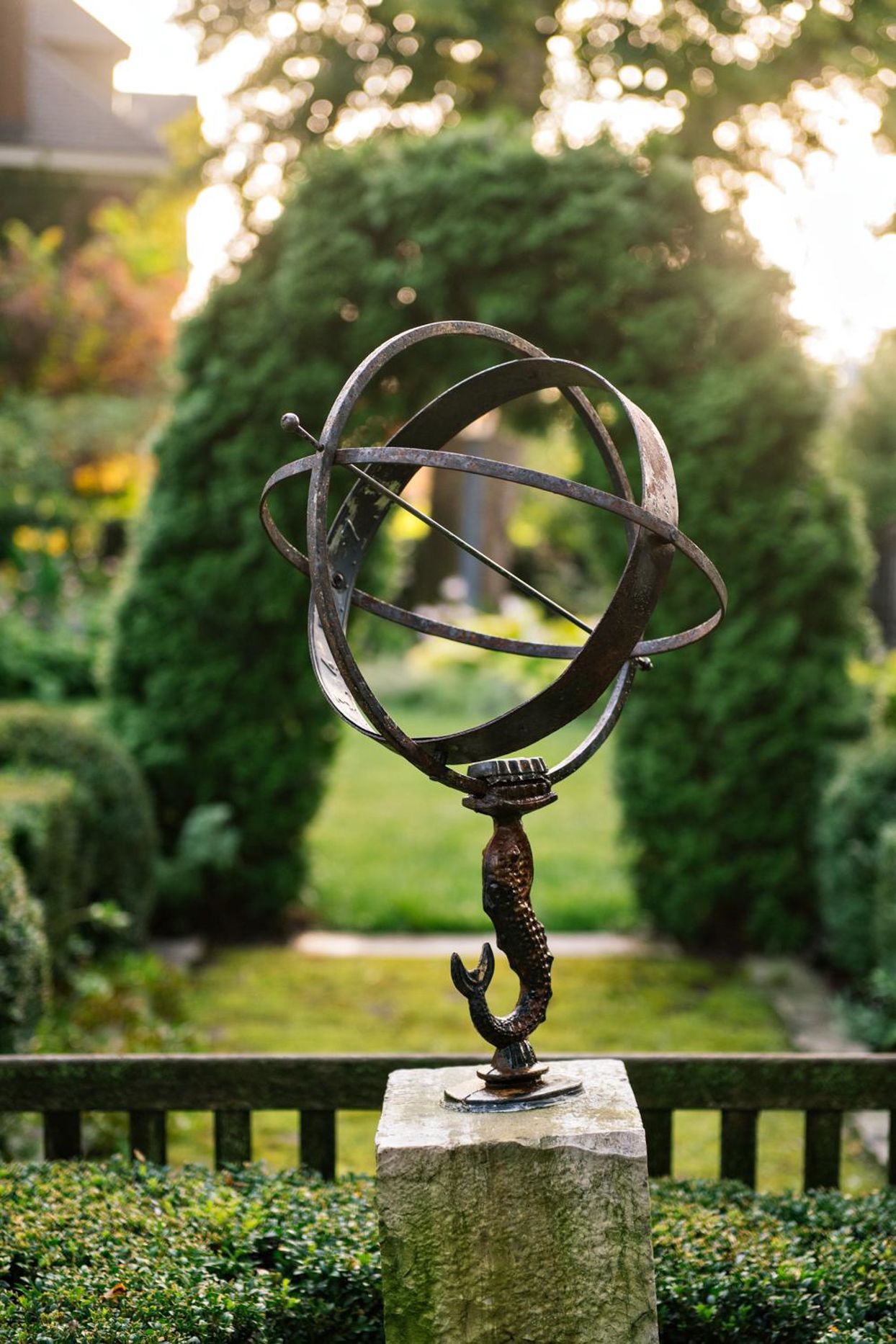 Tonight's salad is as close as the vegetable garden. Jon's secrets to great tomatoes? "I took inspiration from Italy and Greece and incorporated sand-tomatoes love sand and heat." Even the old garage, a 1990s addition to the property, is eye candy. Jon transformed the three-stall structure into an elegant pool house accented by climbing vines and window boxes that opens to a new patio and saltwater pool. The canopied outdoor daybed from Arhaus has turned out to be a favorite. "It's the perfect place to curl up and read a book," he says. No matter where they are, Jon's guests know they are welcome to relax and kick back-maybe even kick up their heels. The 1904 Knabe piano in his drawing room isn't just there to look pretty. "At parties, we've been known to move back the furniture, roll up the carpets, and dance," he says. "It's tradition-a Southern thing." 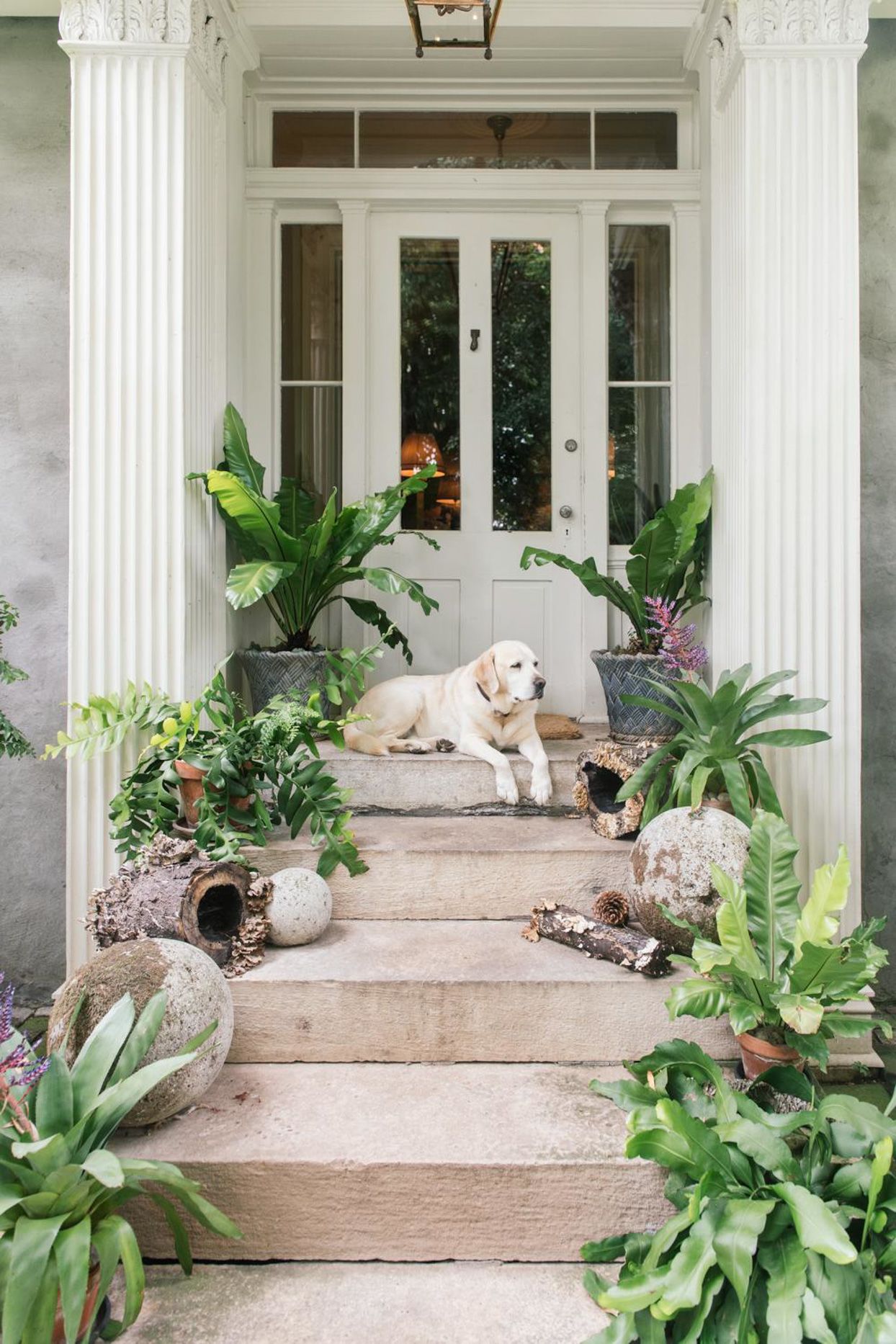 Celebrating the past, celebrating nature, celebrating life. Jon has woven it all into this revitalized old home. "It's a feel-good house," he says. "People fall in love with it-just like I did."