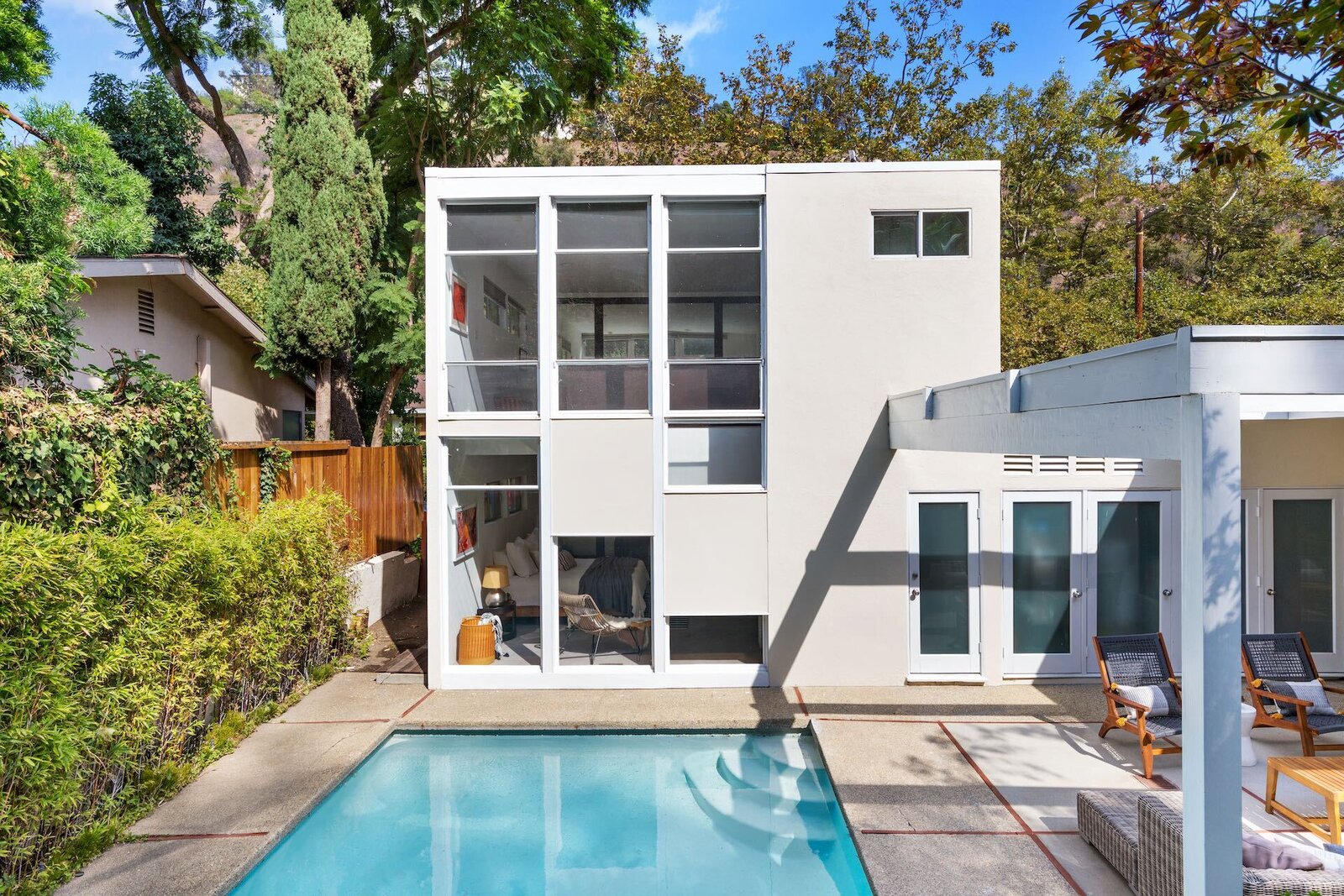 The T-shaped residence combines Koenig’s trademark steel-and-glass construction with warm wooden accents, which were unexpected for the Case Study architect at the time.

Call this a case study in warm, wood-ensconced modernism from an architect known for working with steel or perhaps an example of relatively modest postwar housing from a man whose work has long been associated with Hollywood glamour. In the Crestwood Hills enclave of Brentwood, Los Angeles, known for its high concentration of homes by midcentury masters, the 1961 Wilheim House is a quintessential work by architect Pierre Koenig-with some unconventional characteristics.

The Wilheim House features two design details that were uncommon for architect Pierre Koenig at the time: a second level and warm wooden accents on the ceilings and facade.

Koenig, a World War II veteran, earned an architecture degree in 1952 from the University of Southern California. The young architect became interested in steel framing for houses, and when one of his professors rejected the idea, Koenig successfully designed and constructed a steel-framed home two years before he even graduated, which won him an American Institute of Architects Design Award.

The architect gained fame in 1960 with completion of the Stahl House, better known as Case Study House #22. A steel-and-glass box cantilevered its sloping site in the Hollywood Hills, the Stahl became perhaps the most familiar house of the iconic Case Study program, which included works by celebrated modernists like Richard Neutra, Charles and Ray Eames, A. Quincy Jones, and Eero Saarinen. Koenig’s two Case Study houses, the 1960 Stahl House and 1958 Walter Bailey House, were both framed with steel. 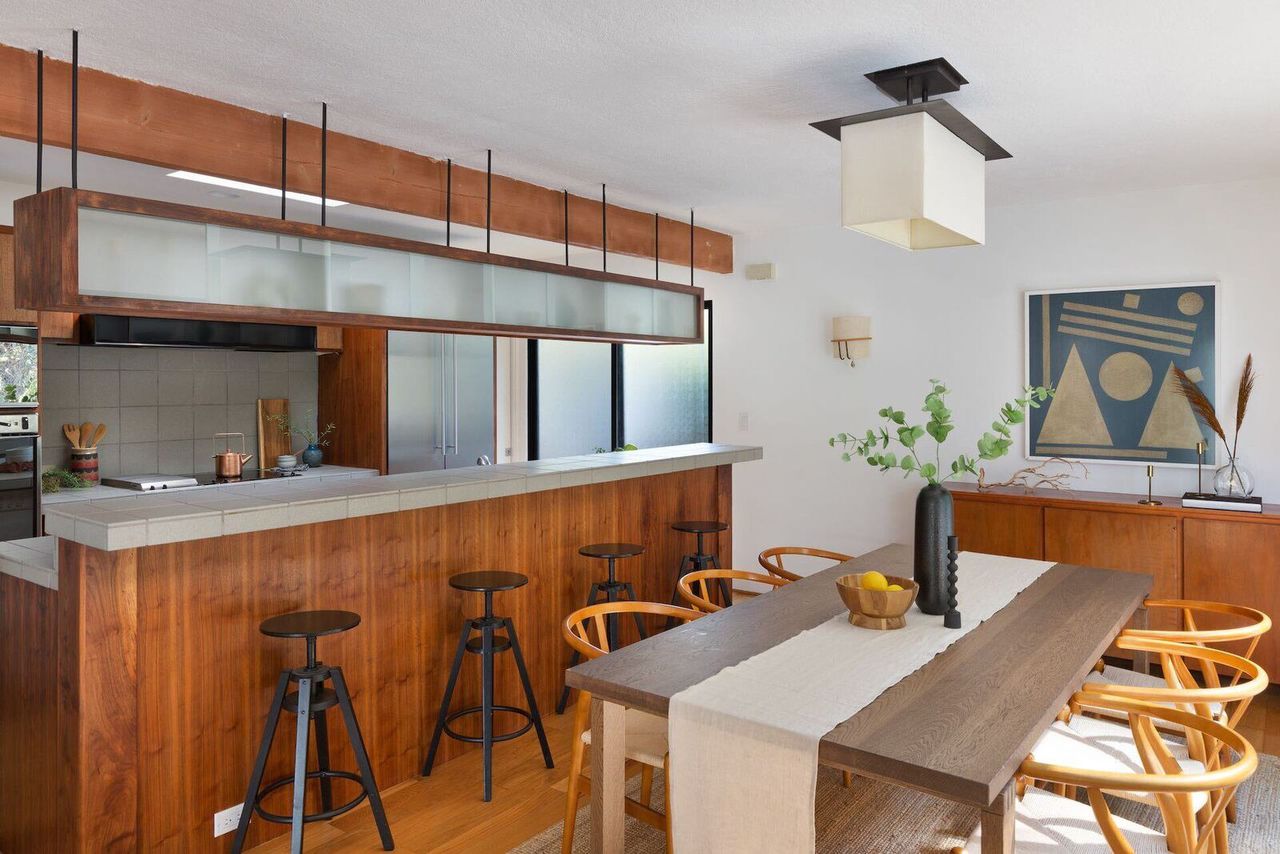 While Koenig was lesser known than some of the other Case Study architects at the time, a black-and-white photo of the Stahl House taken by Julius Shulman (which is now part of the nearby Getty Museum's permanent collection) made Koenig’s work famous. A few months after the Stahl House was completed and Shulman’s photo published, Koenig was commissioned by Robert and Jeri Wilheim to design their home on North Bundy Drive in Los Angeles at the edge of the Santa Monica Mountains. 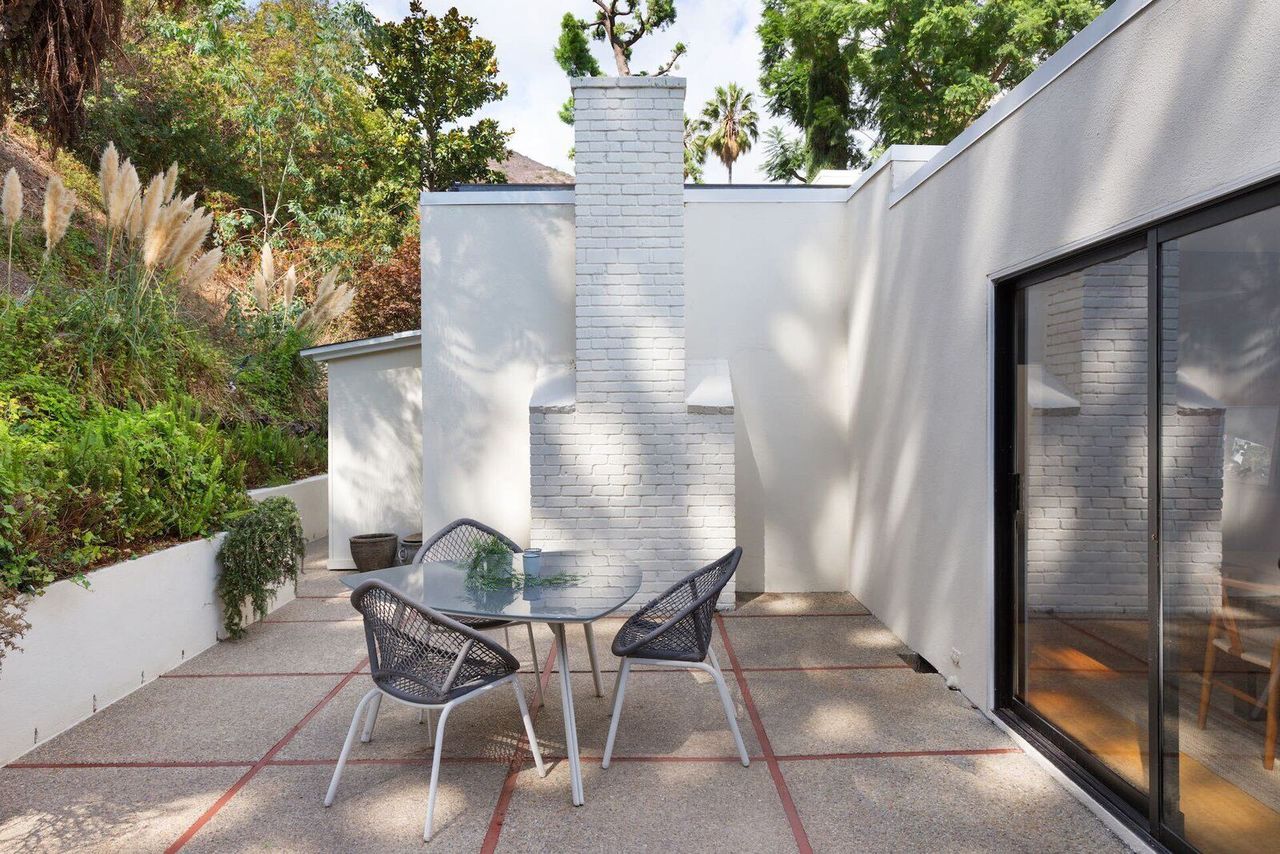 The three-bedroom, three-bathroom residence occupies a narrow lot nestled against the hillside. Keonig decided against using a retaining wall to facilitate a lush setting (and save money).

The Wilheims were introduced to Koenig by their friend, Tom Seidel, husband of actress Jean Hagen (of the classic 1952 musical Singin’ In The Rain), who had already built two homes with the architect. At first, the couple were unsure about hiring Koenig due to their preference for wood, but they went ahead with the project after the architect produced a design for a steel-framed home with ample wooden accents.

Just a few months after the home was completed, the Bel Air Fire of 1961 destroyed nearly 500 homes in the area. The Willheim House was damaged by the blaze but, thanks to its steel framing, was not destroyed. After repairs, the Wilheims moved back into the residence and stayed for another five years. 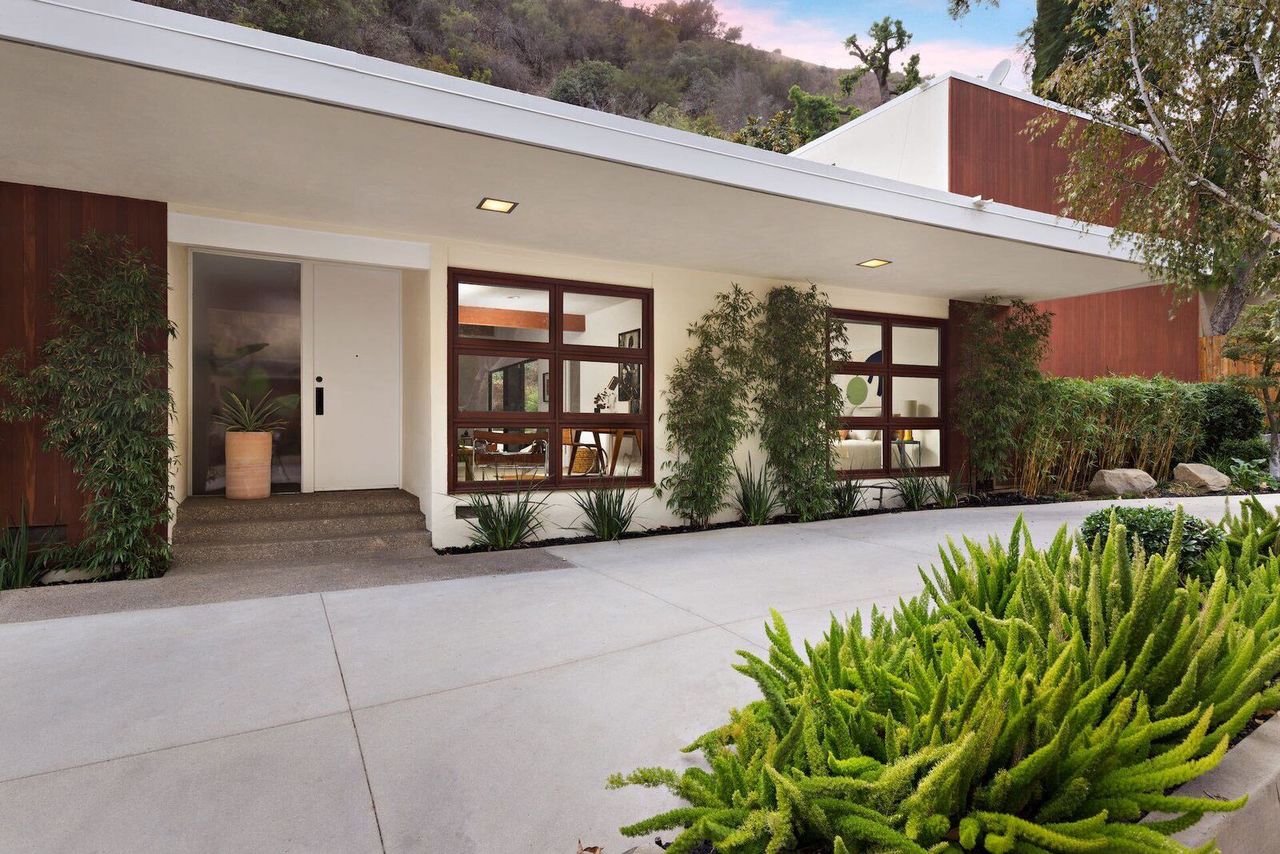 To save space, Keoning also eschewed a carport on the side of the home. Instead, the architect designed a curving, porte cochère–style front driveway, with the overhanging roof acting like an awning.

The three-bedroom, three-bathroom residence occupies a narrow lot nestled against the hillside. "By situating the house linearly in the same direction as the axis of the street, Koenig was able to get a lot more square footage onto the site without having to develop a structural system to retain the hillside," explains realtor Mike Deasy of Deasy Penner Podley. To save space, Keoning also eschewed a carport on the side of the home, instead designing a curving, porte cochère–style driveway in front, with the overhanging roof acting like a carport awning-in effect, creating a "carport-cochère." 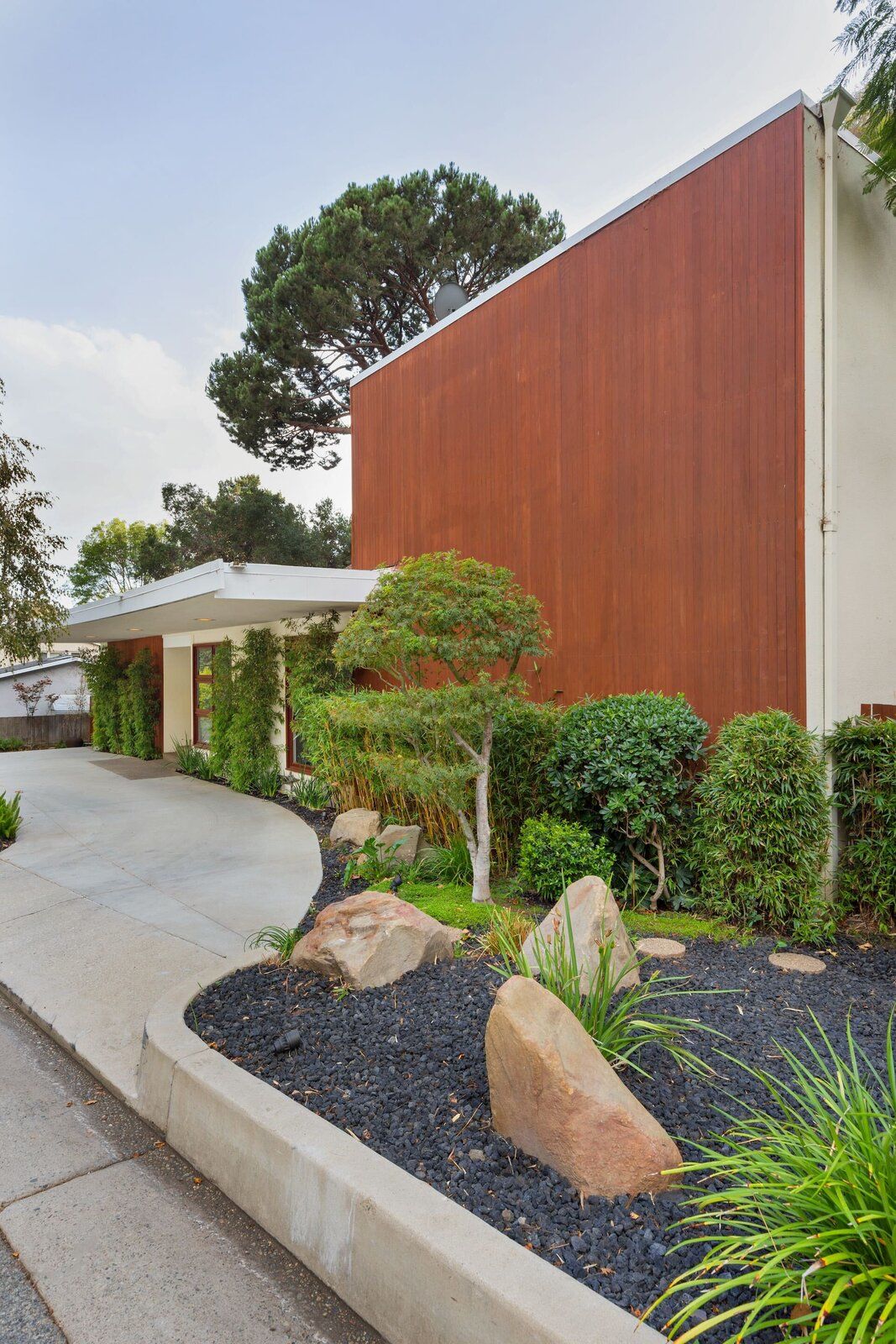 The street-facing facade features a two-story volume clad in wood.

Koenig saved more space by giving the Wilheims something most classic California modernist homes lack: a second floor. While the great room extends as a single story on the south side, a two-story volume containing the bedrooms rises on the north side of the residence. The private wing faces the street with a completely windowless, two-story facade clad in natural wood. This was a bold and unexpected move for Koening, given that he and his Case Study contemporaries are largely associated with glass and transparency. 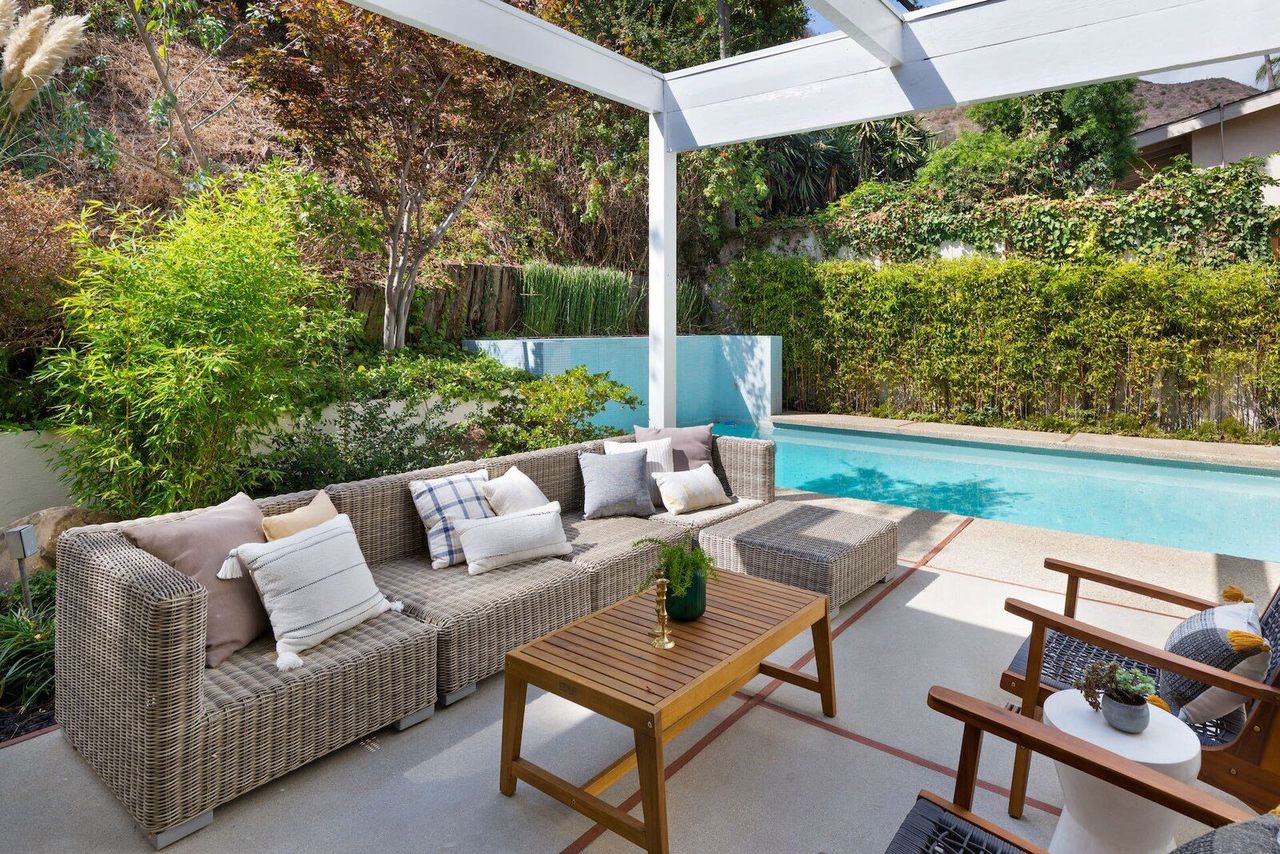 A wood loggia marks an outdoor seating area beside the pool. 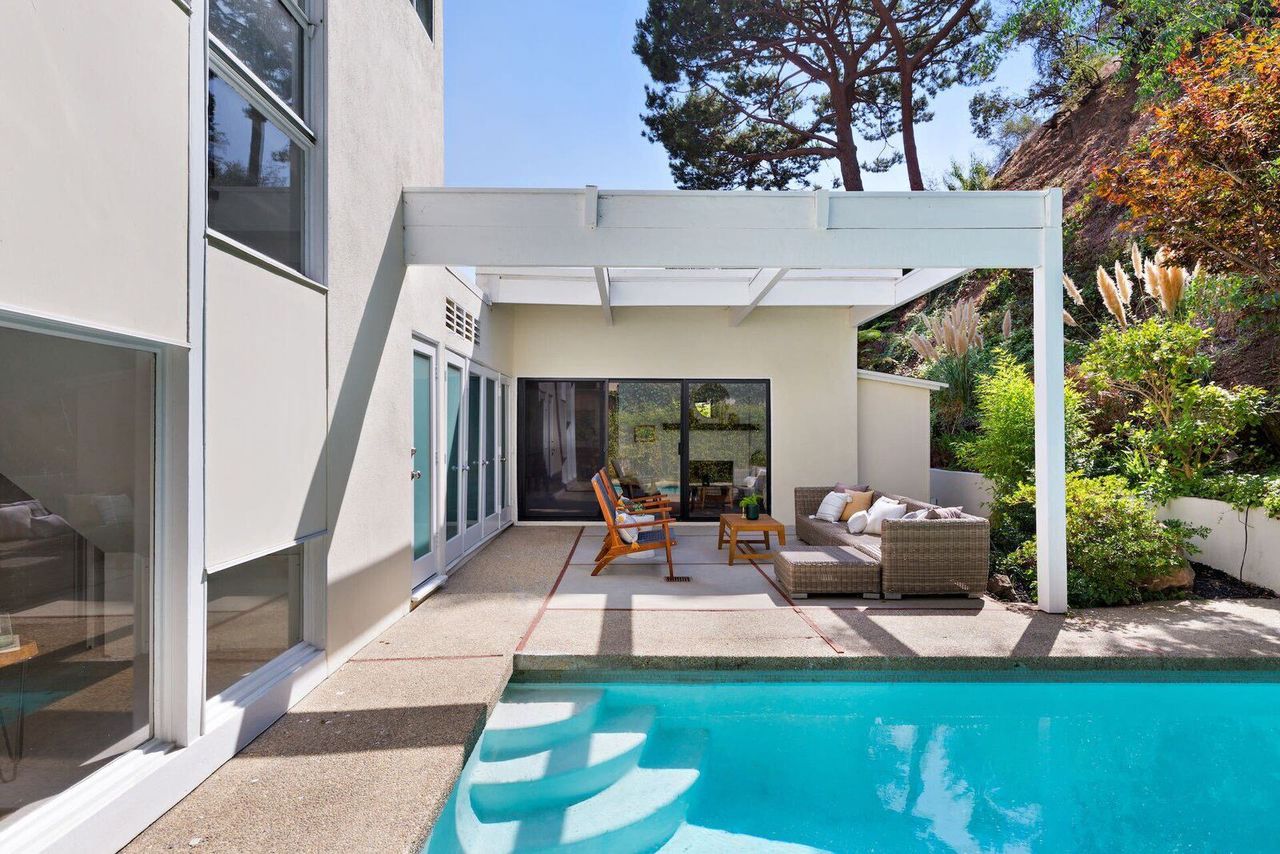 The public and private wings enclose the pool and outdoor gathering area.

By orienting glazing on the back side of the house, "You have a very quiet, almost hidden environment," says Deasy. "The design wraps the two wings around the pool, and on the right adds a kind of loggia-it’s an intimate little enclave," he continues. 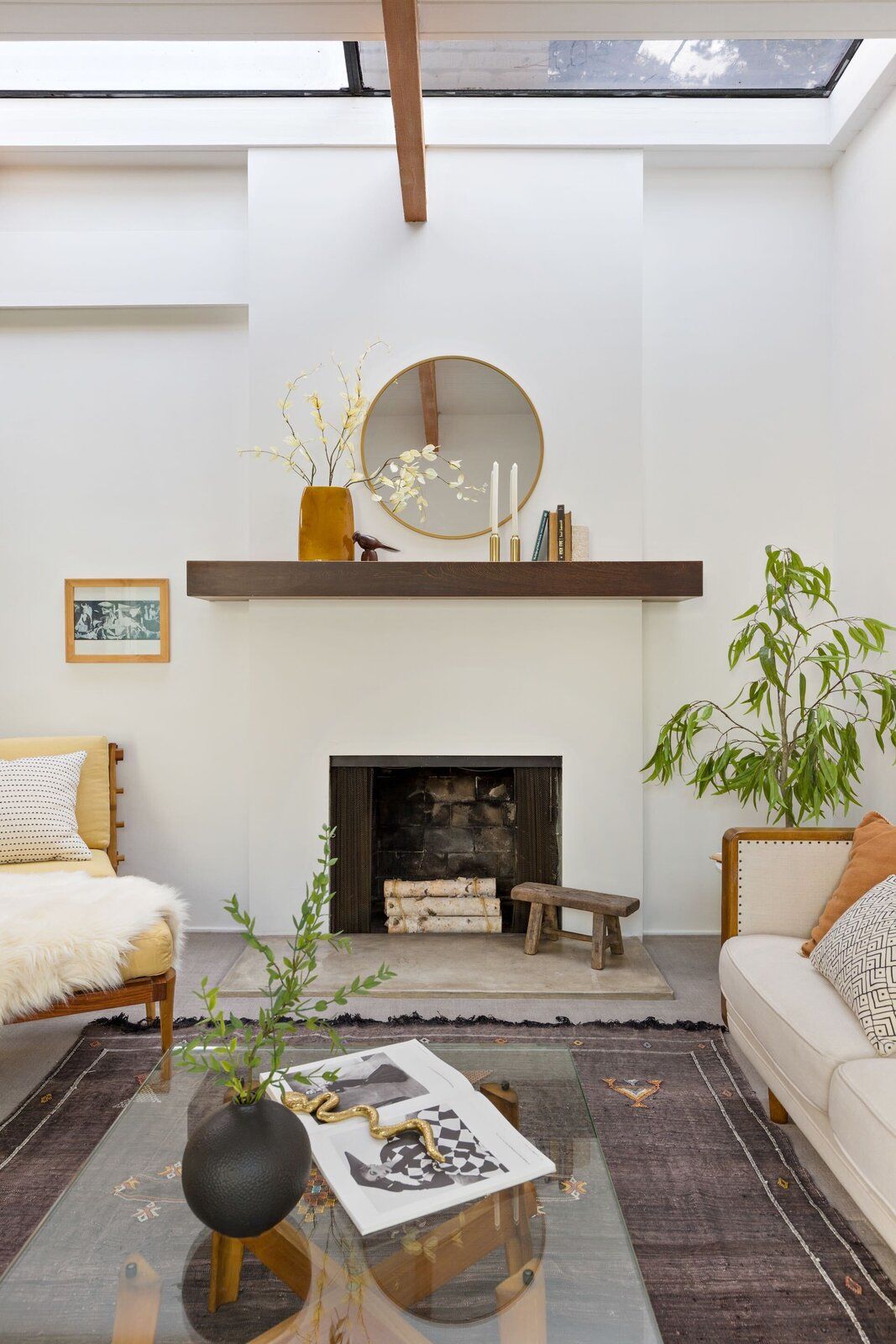 A built-in fireplace and skylights help make the living room both cozy and full of light. 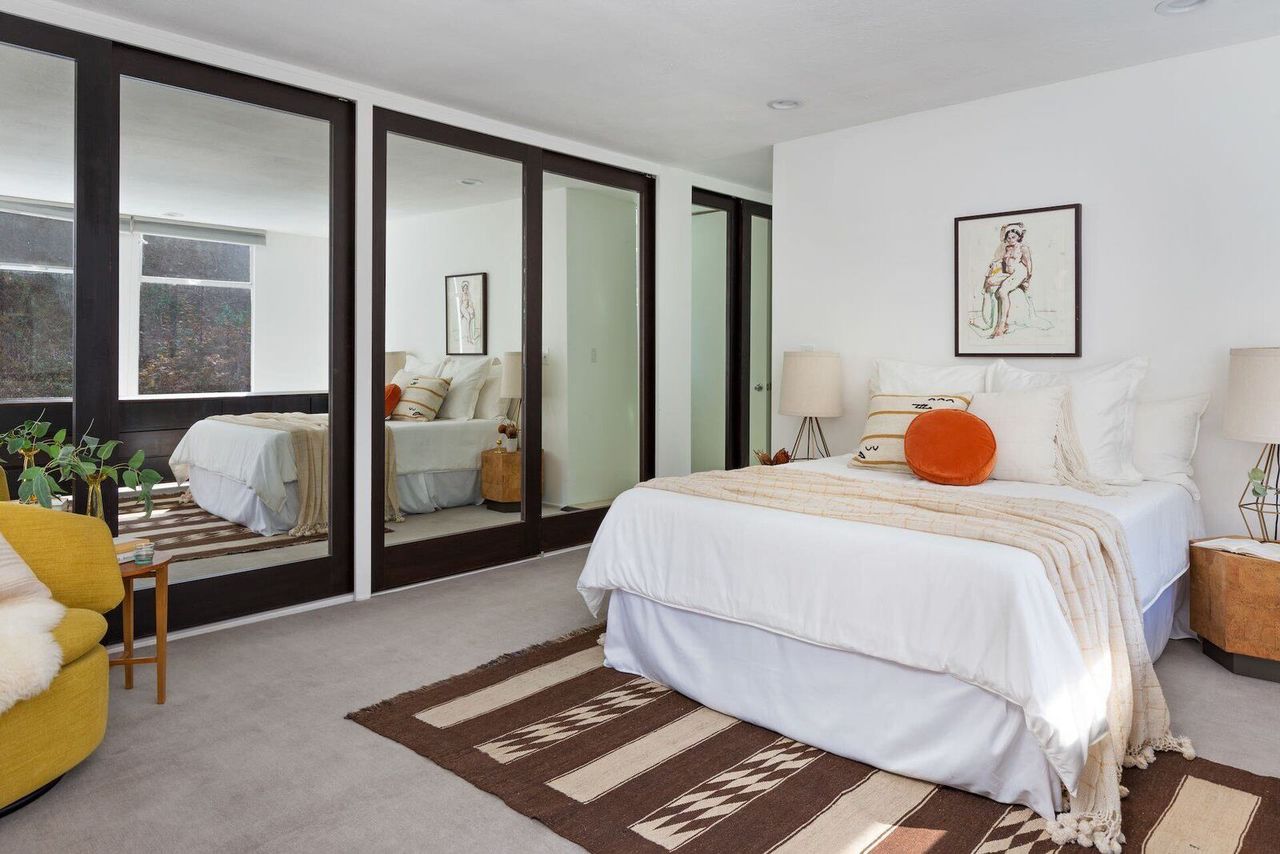 Mirrored closet doors in the principal bedroom capture light from the windows facing the backyard.

Inside the three-bedroom, three-bathroom residence, Koening paired steel vertical framing with wood ceiling beams, which add a sense of warmth, as do the naturally stained kitchen cabinets and oak floors in the kitchen and dining area. The T-shaped floor plan seamlessly segments the kitchen, dining, and living areas. 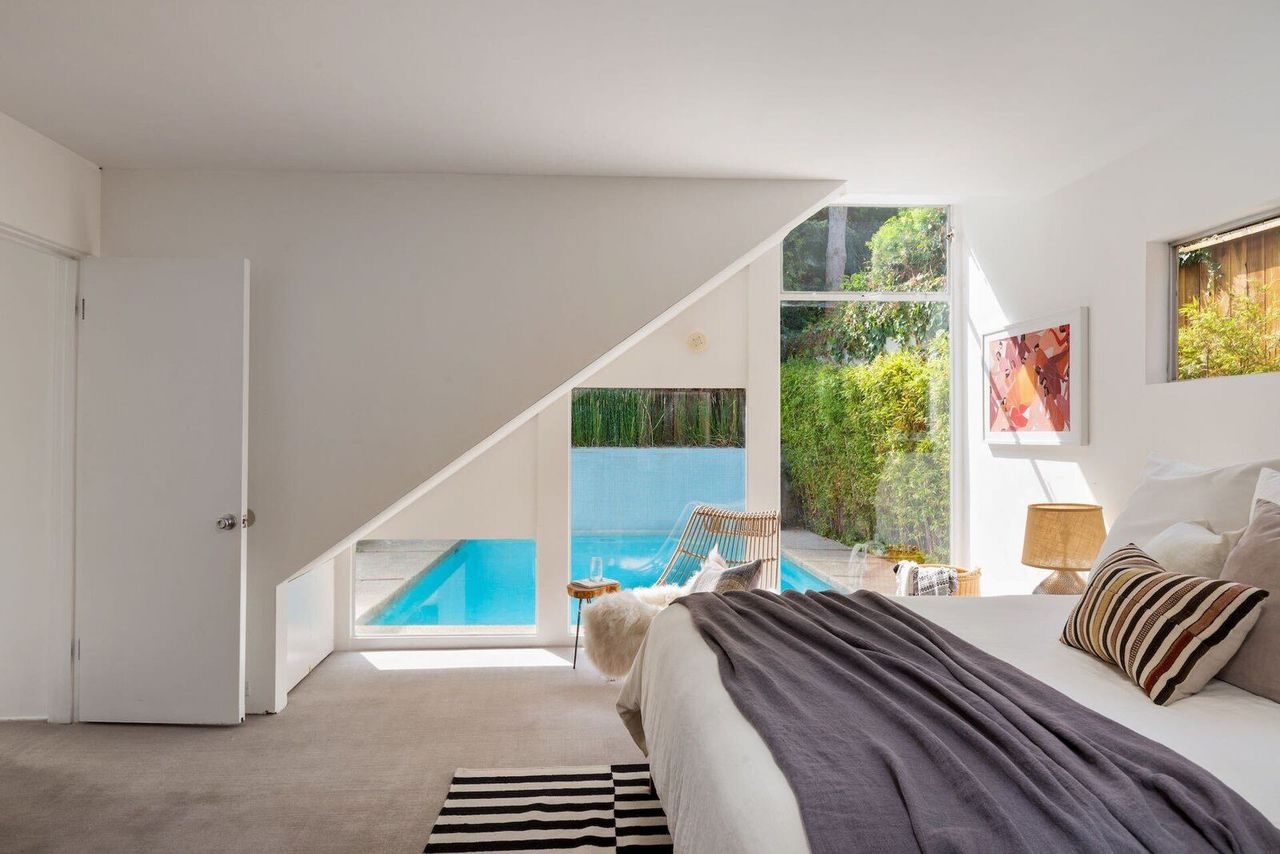 Beneath the stairway, a downstairs bedroom sneaks a view of the pool.

Viewed from the back, a grid-like wall of rectangular glass panels clads the two-level volume. A glass-enclosed stairway leads to the primary bedroom and en suite bath, which overlook the pool, courtyard, and hillside. Beneath the stairs, another bedroom looks out at the pool through a wall with glazing on the lower right half of a diagonal slant. The principal bedroom and en suite bathroom face the pool and hillside.

For those interested in historical accuracy, the Wilheim House has scarcely been altered from its original form. "When I sold it to them 30 years ago," Deasy says of the current sellers. "This is pretty much the way it was."

Following the completion of the Wilheim House, Koenig devoted an increasing amount of his time to architectural education. Hired by his alma mater in 1964, the architect taught at the USC School of Architecture until his death in 2004. But he never stopped designing: Koenig’s last project, the Michael LaFetra Beach House in Malibu, was commissioned in 2000 and completed posthumously in 2012.