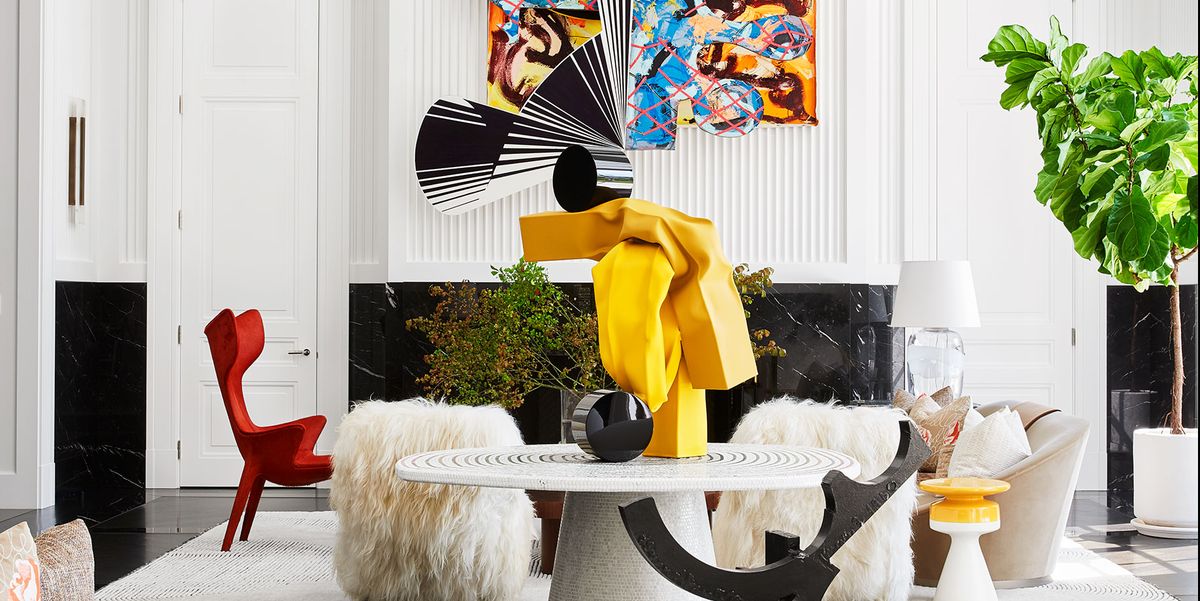 More Is More in This Gargantuan, Art-Filled House in the New York Suburbs

Designing a 33,000-square-foot family home might seem daunting for some. Not for Delphine Krakoff.

Bank of America. Beyoncé. Bubble tea. Some things really are too big to fail. But bringing a 33,000-square-foot house to boisterous, unfussy life is no sure thing. Add to the mix a museum-quality art collection, 24-foot-high ceilings, and a private hockey arena, and you’re one misstep away from a residence that feels larger than livable, too imposing to greet visitors with a sweet embrace. 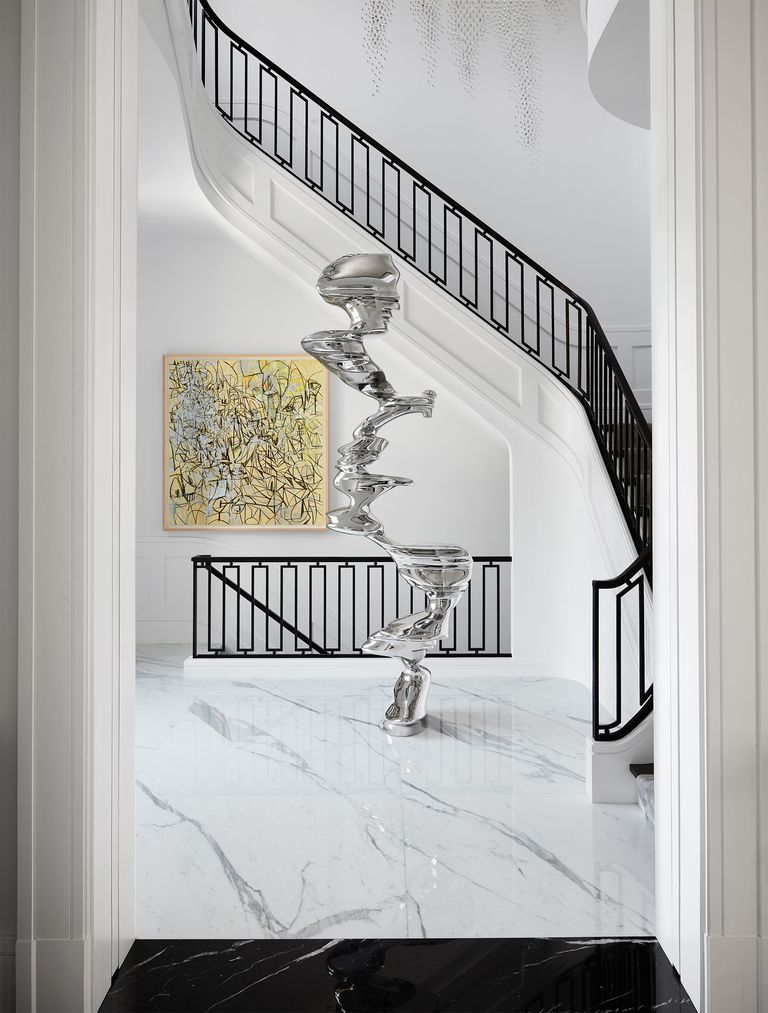 In the main stair hall, the stainless-steel sculpture is by Tony Cragg, and the artwork is by George Condo.

“The idea, selfishly, was that I want everyone right here,” says the homeowner, an inveterate entertainer who (pre-pandemic) had dreams of dinners with guests in the three digits and child birthday sleepovers in a dedicated slumber party room. Her new home in leafy Scarsdale, just north of New York City, had to operate on multiple levels. It needed to accommodate stampedes of visitors and yet, in a family with three kids and two dogs, also feel like an honest-to-goodness refuge: a dwelling and a resort all in one. 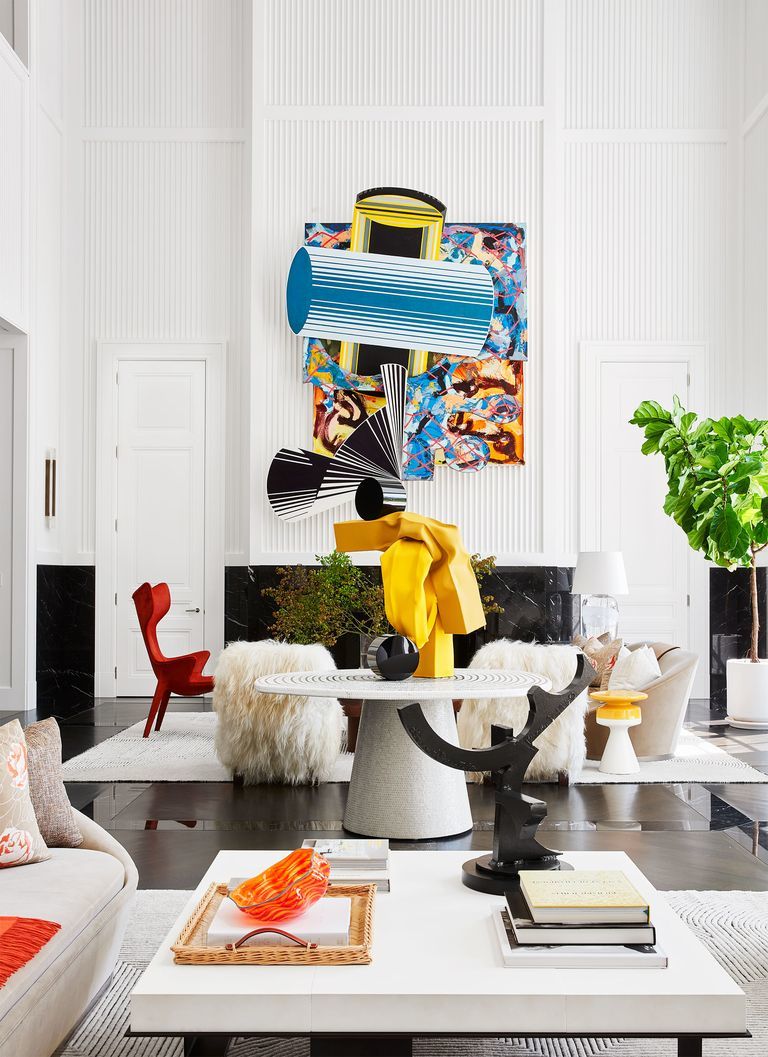 A Carol Bove sculpture rests atop a Pierre Charpin center table from Galerie Kreo, and a Holly Hunt cocktail table holds a Dale Chihuly glass sculpture on an Hermès tray. The artwork on the wall is by Frank Stella.

She had seen Delphine Krakoff’s work in the homes of friends and admired her sense of elegance and playfulness. “She fills a home with a magnificent spirit,” the owner says. “I love that she uses a pop of color here and there. It’s not overly done, but it’s not boring and drab.”
The need to bring a grounded quality to a home awash in elevated components (and ceiling heights) hardly ruffled Krakoff, who knows a thing or two about building chic and child-friendly environments. In addition to running her Manhattan-based ELLE DECOR A-List firm Pamplemousse Design, the Paris native is a mother of four and the wife of Reed Krakoff, the fashion designer and former creative director of Tiffany & Co. Her appreciation of furniture with pedigree was useful here, where every single item-from the coffee tables to the coffee-table books-was a new acquisition. Over the five years that the project took to complete, she worked alongside the home’s architect, Anthony Minichetti, to ensure that all aspects of the interiors were in harmony. “The rooms are enormous,” Krakoff says. “The challenge was to still make it a human scale and warm and fun.” 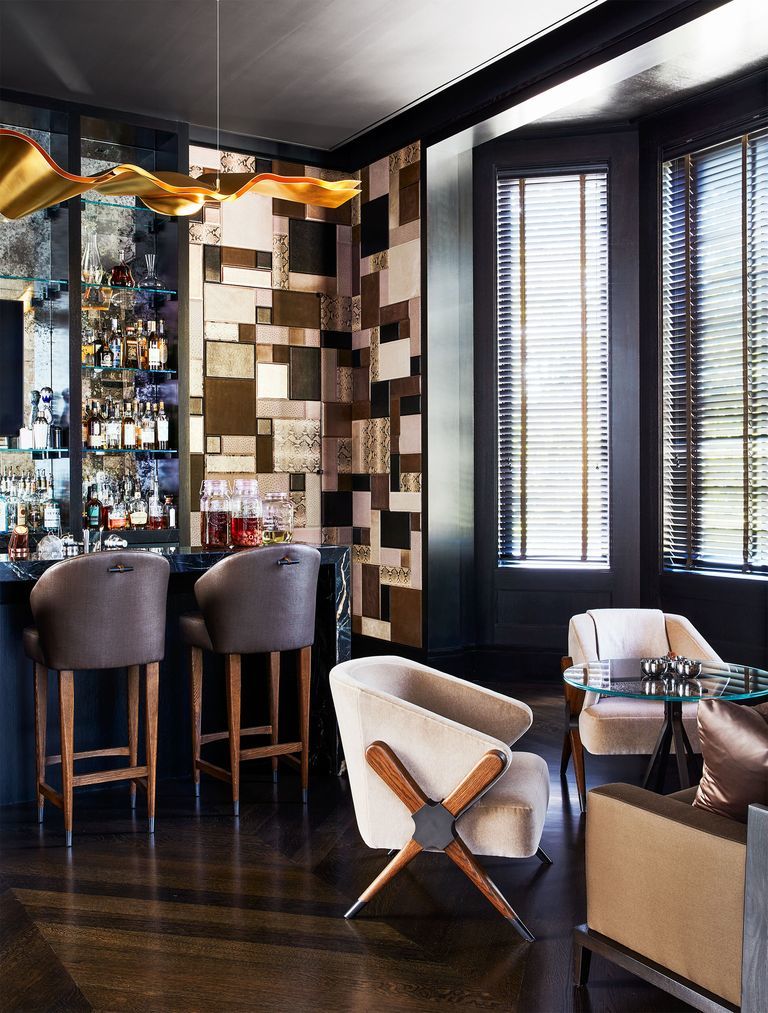 Custom barstools pull up to a granite bar in the lounge, where the walls are sheathed in leather tiles. The club chairs in a Rogers & Goffigon mohair velvet and Ingo Maurer pendant are all custom.

Meanwhile, the family’s longtime art consultant, Wendy Cromwell, was working on building out the collection. After reviewing the blueprints and seeing the details, including fluted paneling and waist-high marble wainscoting, it was clear to her that “the art needed to be sculptural,” Cromwell says. She built a five-square-foot “dollhouse” model of the home in order to try out art in various rooms. She helped her clients acquire three-dimensional pieces by rising artists Carol Bove and Jean-Michel Othoniel, as well as what might be the pièce de résistance: the Cones and Pillars sculpture by Frank Stella that presides over the great room. 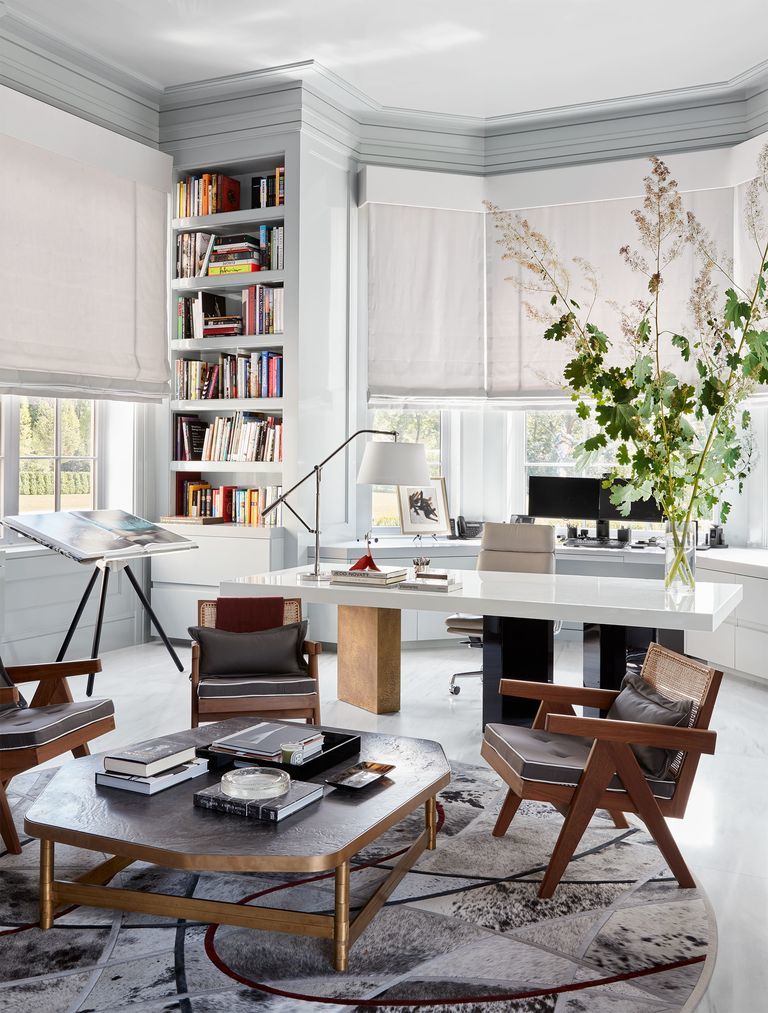 In the office, the desk is by Hervé van der Straeten, available from Ralph Pucci; the vintage armchairs are by Pierre Jeanneret; the cocktail table is by Henge; and the rug is by Kyle Bunting. The Annie Leibovitz Sumo bookand stand are from Taschen, and the table lamp is by Ralph Lauren.

Krakoff amassed a mix of new and vintage pieces, relying on textures and hues to complement the multidimensionality of the sculptures. For the great room, not overshadowing the art was only one of the hurdles. This was a space capacious enough to host a seated dinner for 120. “That’s like the size of a hotel ballroom,” says Krakoff, who divided the room into distinct, cozy seating areas.

She dialed up the whimsy factor in some of the smaller rooms. One of her favorite areas is the bar, inspired by the husband’s love of hotel bars around the world. The dark and clubby space has leather-tiled walls and a custom light fixture that bathes the room in an amber glow. Look closely and you’ll see a secret door that leads to his home office. 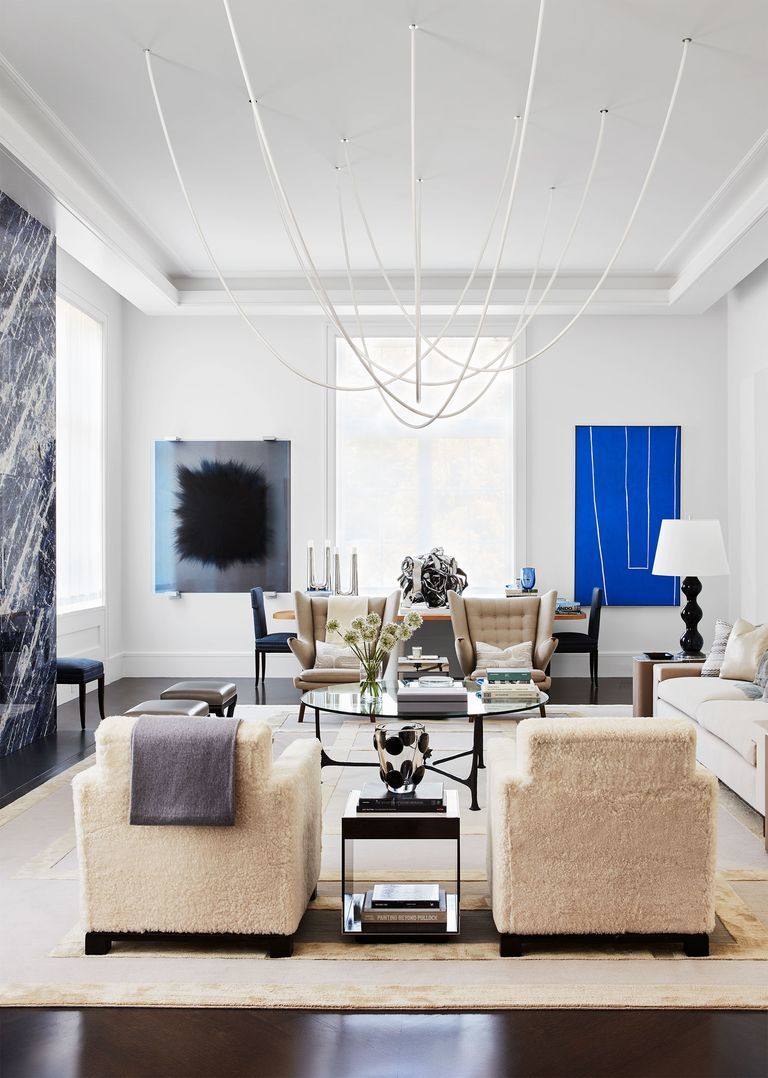 In the living room, a pair of Hans Wegner Papa Bear chairs in a Dedar fabric face two vintage club chairs reupholstered in shearling. The Dmitriy & Co. sofa is custom, the cocktail table is vintage André Arbus, the side table is by Minotti, and the chandelier is by Luke Lamp Co. The sculpture near the window is by John Chamberlain, and the framed artworks are by Idris Khan (left) and Robert Motherwell.

Down below is Fun City, with a professional-size hockey rink encircled by a picture taken with a 3D panorama camera of a crowd at a New York Rangers game. The adjoining game room is stocked with Pac-Man, pinball machines, and a massive Scrabble board. The house was ready for the family to move in a few months before the pandemic hit, just in time for Thanksgiving dinner; by last spring, they were living under lockdown. The husband’s office was his new all-day bunker, while the fantasy kitchen for dinner parties became command central for round-the-clock family meals. 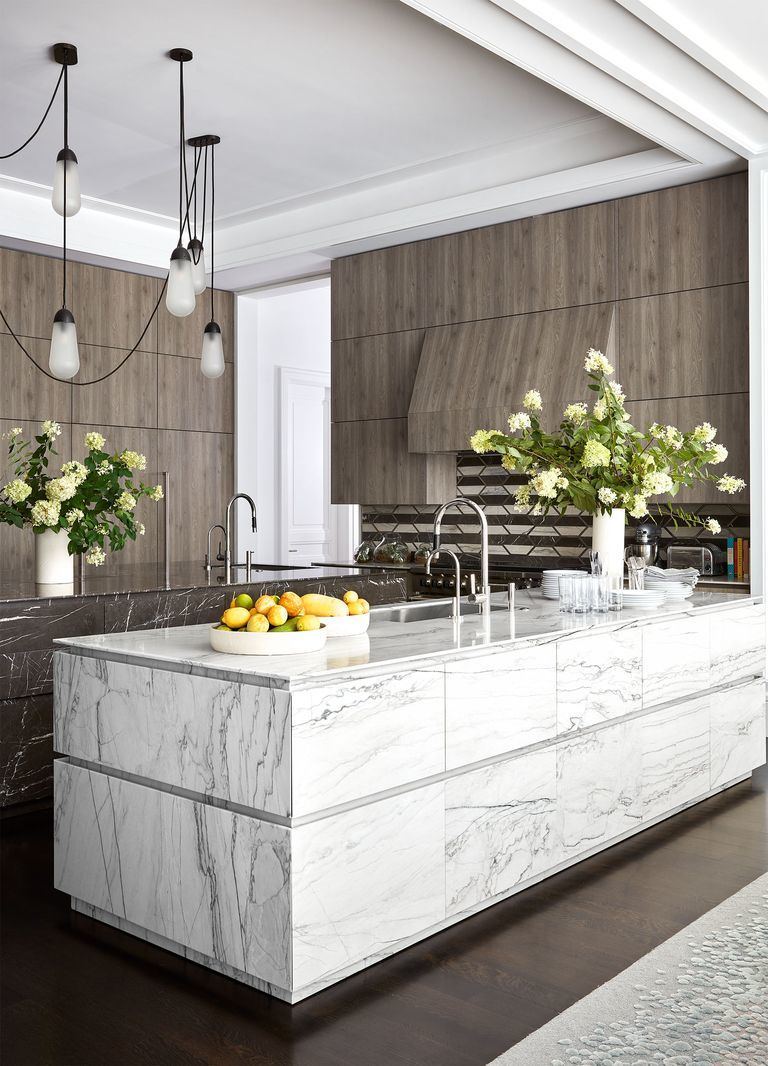 The kitchen cabinetry is by Eggersmann, the sink and fittings are by Dornbracht, the chandelier is by Apparatus, and the vases are by RH, Restoration Hardware.

Recently, though, neighborhood kids-in masks-have begun to race around the hockey rink. A mixology-happy neighbor has been appointed the house “bartender.” Looking further ahead, the owner likes what she envisions: “My children will be able to bring their spouses and their spouses’ families and my grandchildren, and nobody can ever say there’s not enough space.” 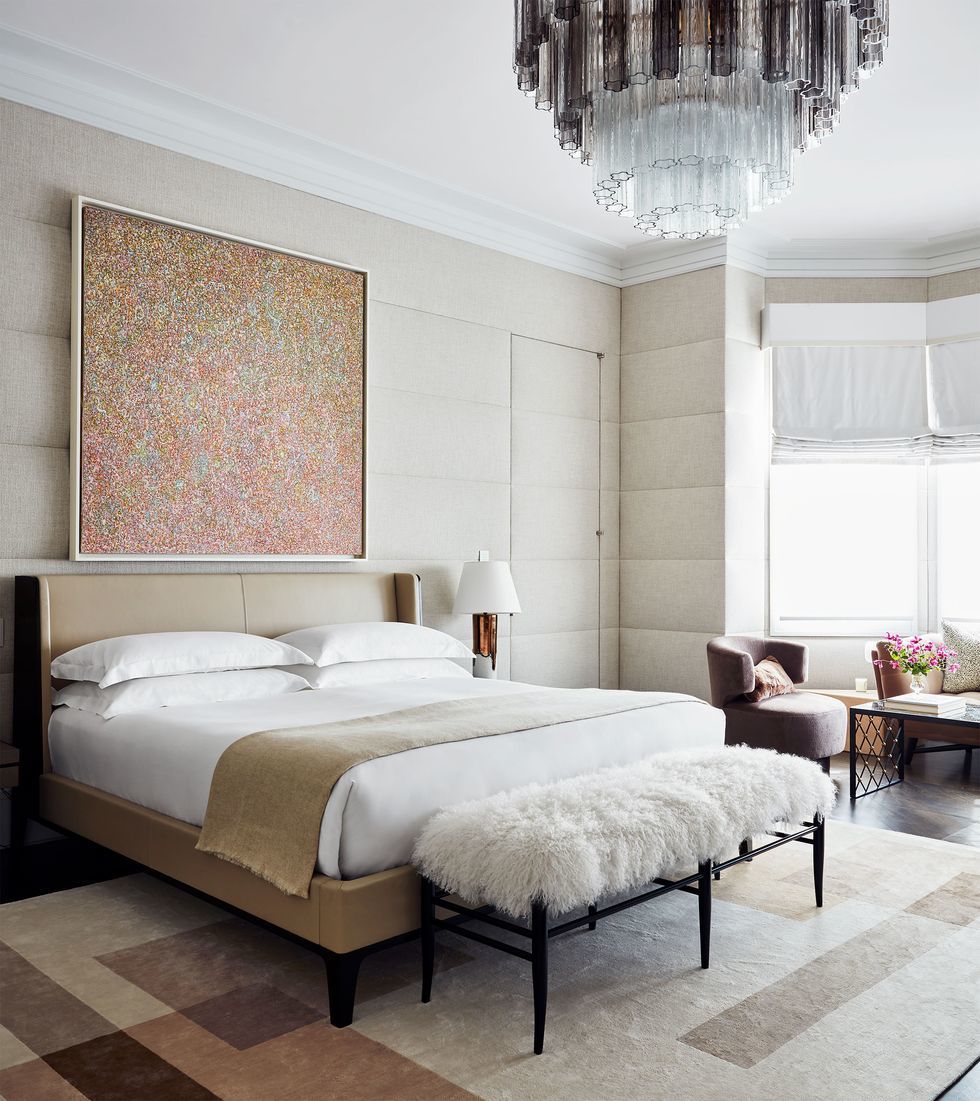 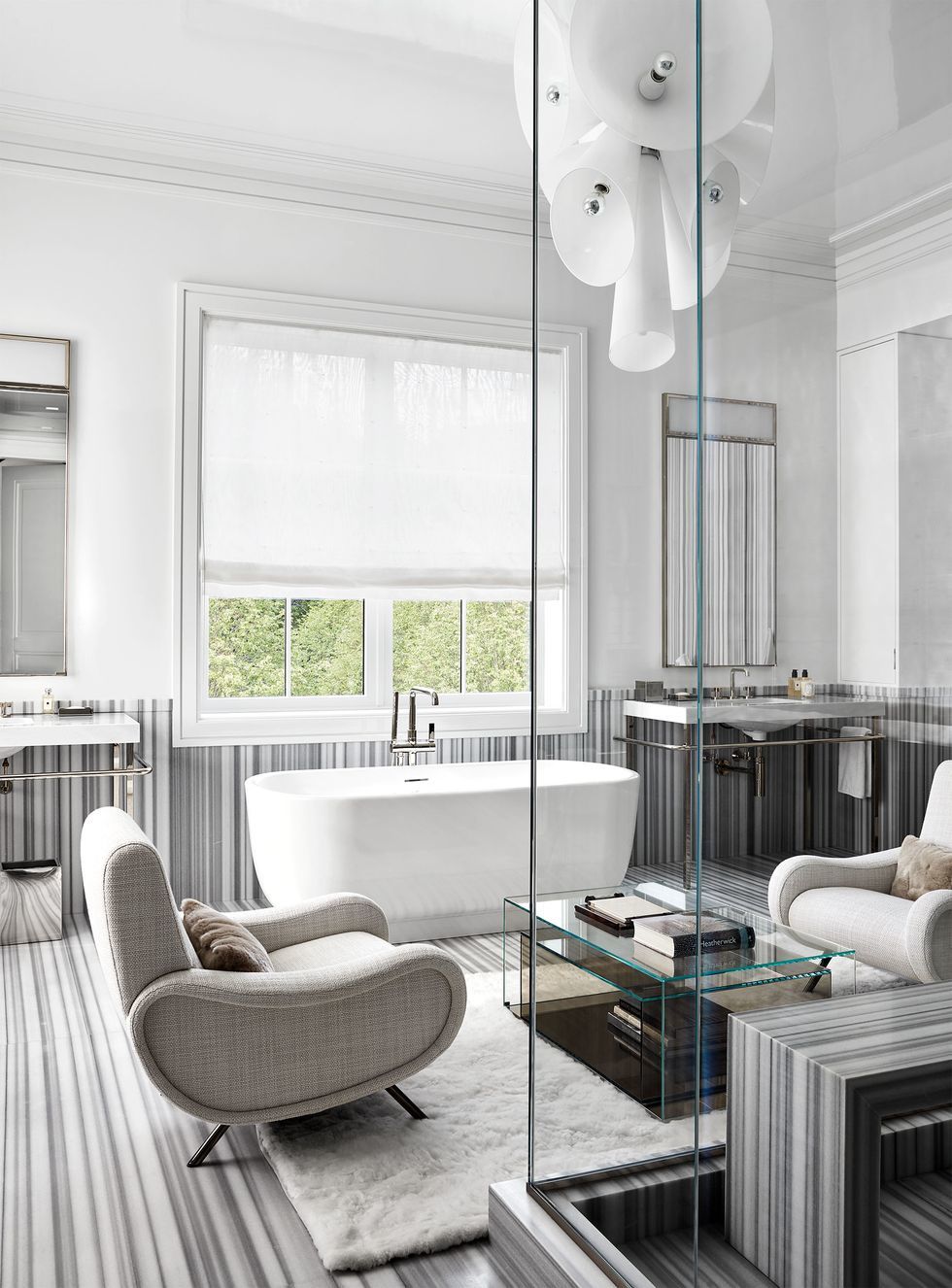 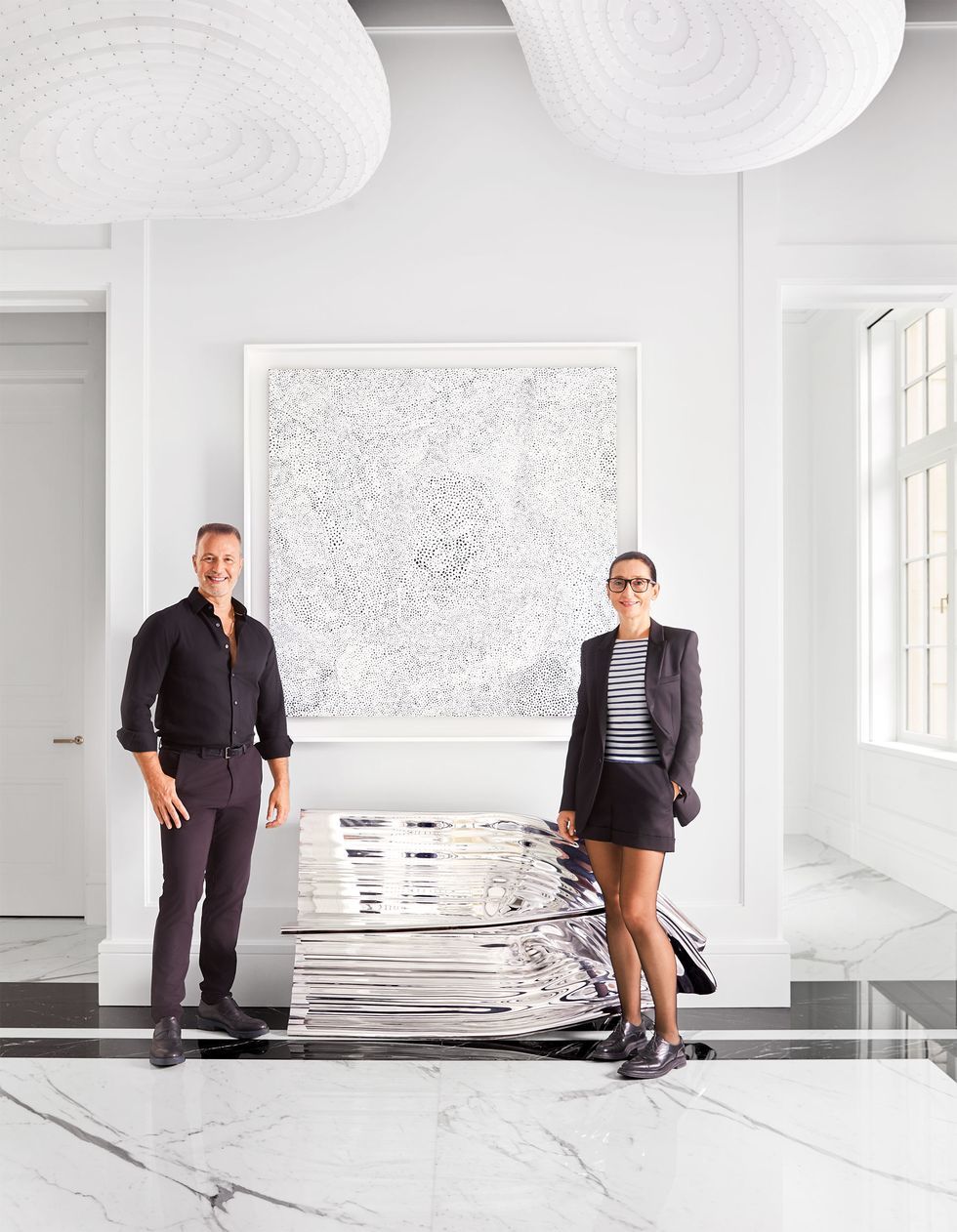