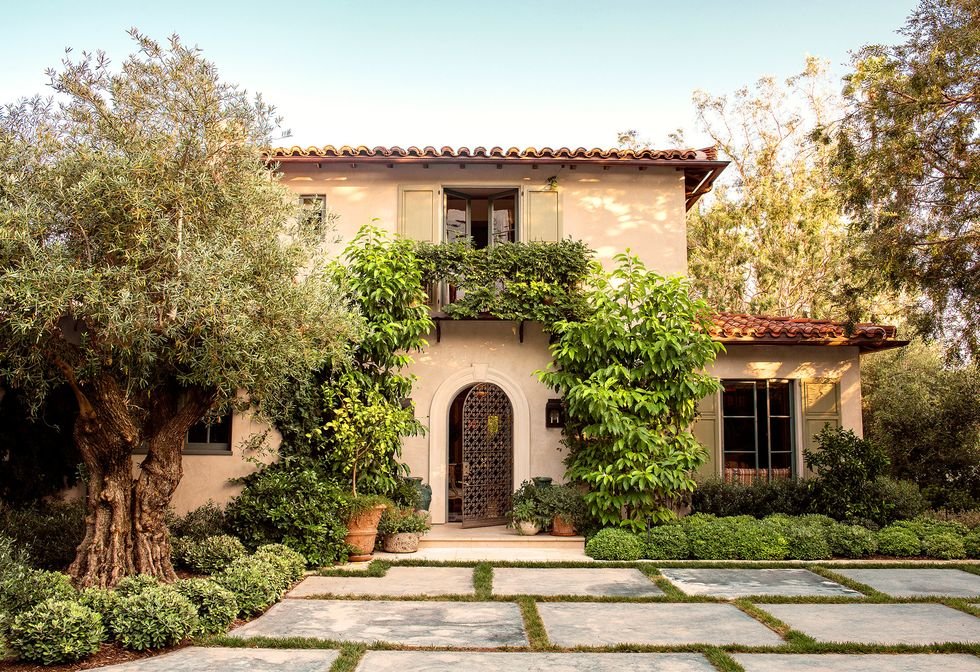 The ED A-List designer infused this 1932 house with Mediterranean style and old-world charm.

Although much of Los Angeles dates back only as far as the early 20th century, the relatively young city holds an unlikely affinity for old-world charms. Michael S. Smith, the L.A. designer who redesigned the White House during the Obama administration, recently completed the interiors of a Beverly Hills home dating to 1932 that closely resembles a classic Mediterranean villa-terra-cotta roof tiles, stucco walls, and all. Inside, Smith’s approach embraces that likeness, as the arched entryway opens to a foyer evocative of a European courtyard; the floors are paved in reclaimed Spanish stone, and miniature antiquities, including a small obelisk carved from marble, sit atop an 18th-century northern Italian walnut console. As the skylight at the top of the central staircase illuminates the vase of freshly cut olive branches below, one gets the distinct sensation of standing in the open Mediterranean air. 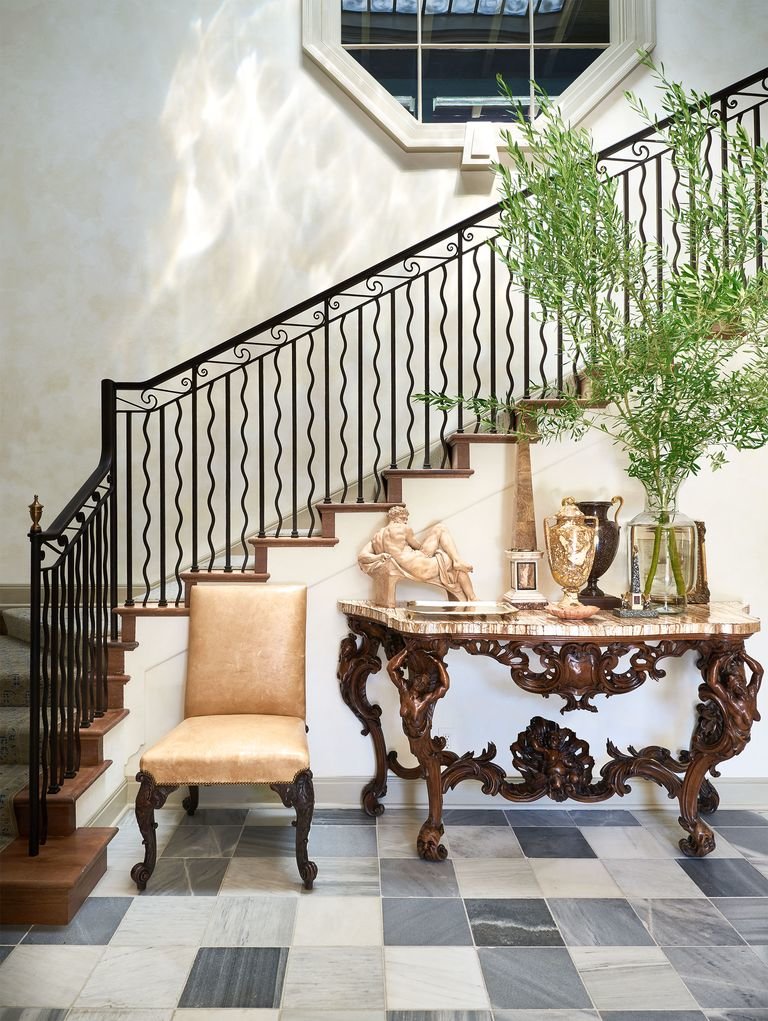 The rest of the 12,000-square-foot, nine-bedroom home likewise unfolds as a journey through different eras and destinations, a convergence of various historic European sensibilities: the layering of boldly patterned textiles, an abundance of exquisitely crafted marble and stone, and a formidable collection of 17th- and 18th-century art and design. 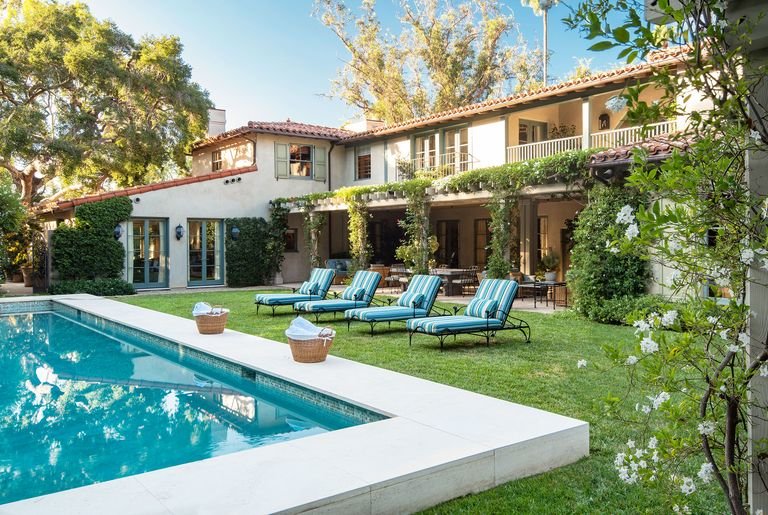 Smith describes these interiors as a “greatest-hits album,” a testament to the clients’ world travels. For decades, he and the couple who own the house have done a fair amount of globe-trotting together, scouring flea markets and auction houses to furnish their residences in New York, California, Majorca, and beyond. For this home, Smith decided to pull different design elements from the couple’s rich past, “reshuffling the deck,” he says, by bringing them together under one roof. “This is sort of the distillation of what they’ve loved about all the houses they’ve had.” 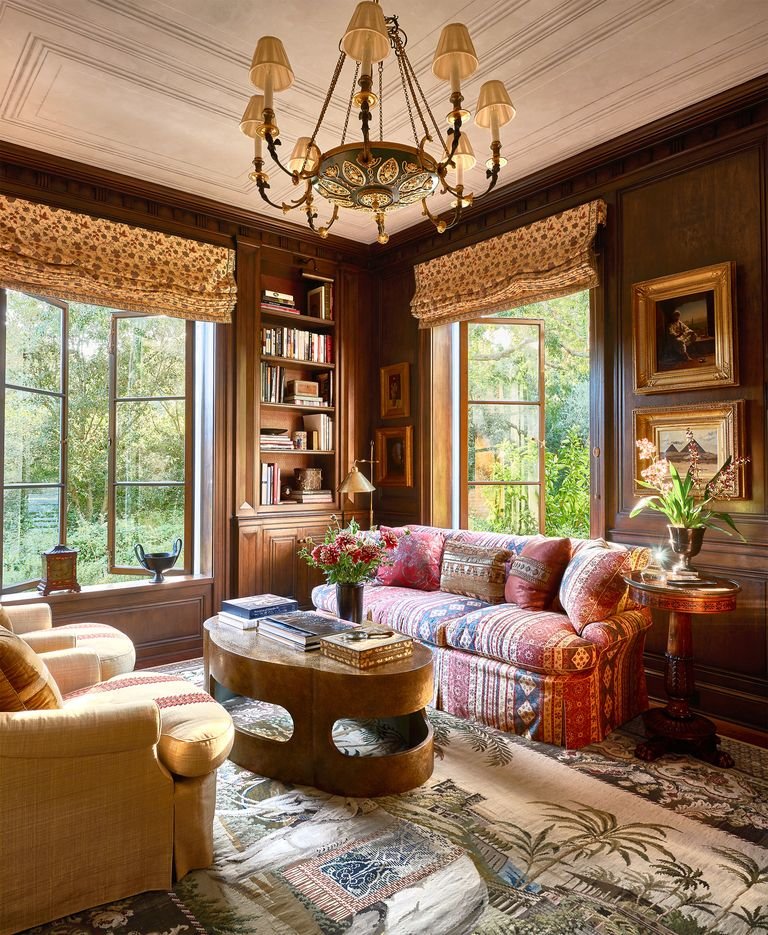 Dialing up his yen for pattern, Smith says his “jumping-off point” was his use of French fabrics to bring color and warmth into the home. In the formal living room, surrounding the newly installed Louis XVI–style marble fireplace, the sofas are upholstered in an archival Pierre Frey print, a romantic motif of floral branches that first emerged in the salons of 17th- and 18th-century Europe. Working with Pierre Frey, Smith fine-tuned the pattern to a shade of persimmon, a complement to the custom terra cotta–pink Venetian-plaster walls. 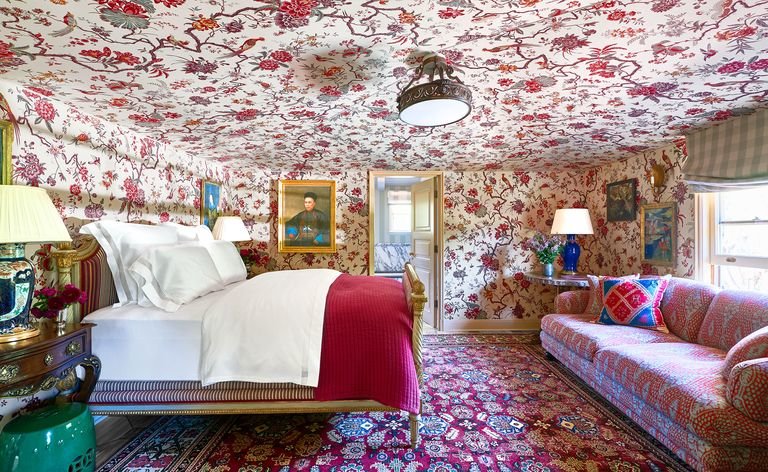 “This idea of a pink living room was something that we thought about for their other houses in the past,” Smith says, but it hadn’t been realized until now. “When you work with the same people for so long, you know that one day you’ll be able to use an idea, so you kind of file it away in your head.” 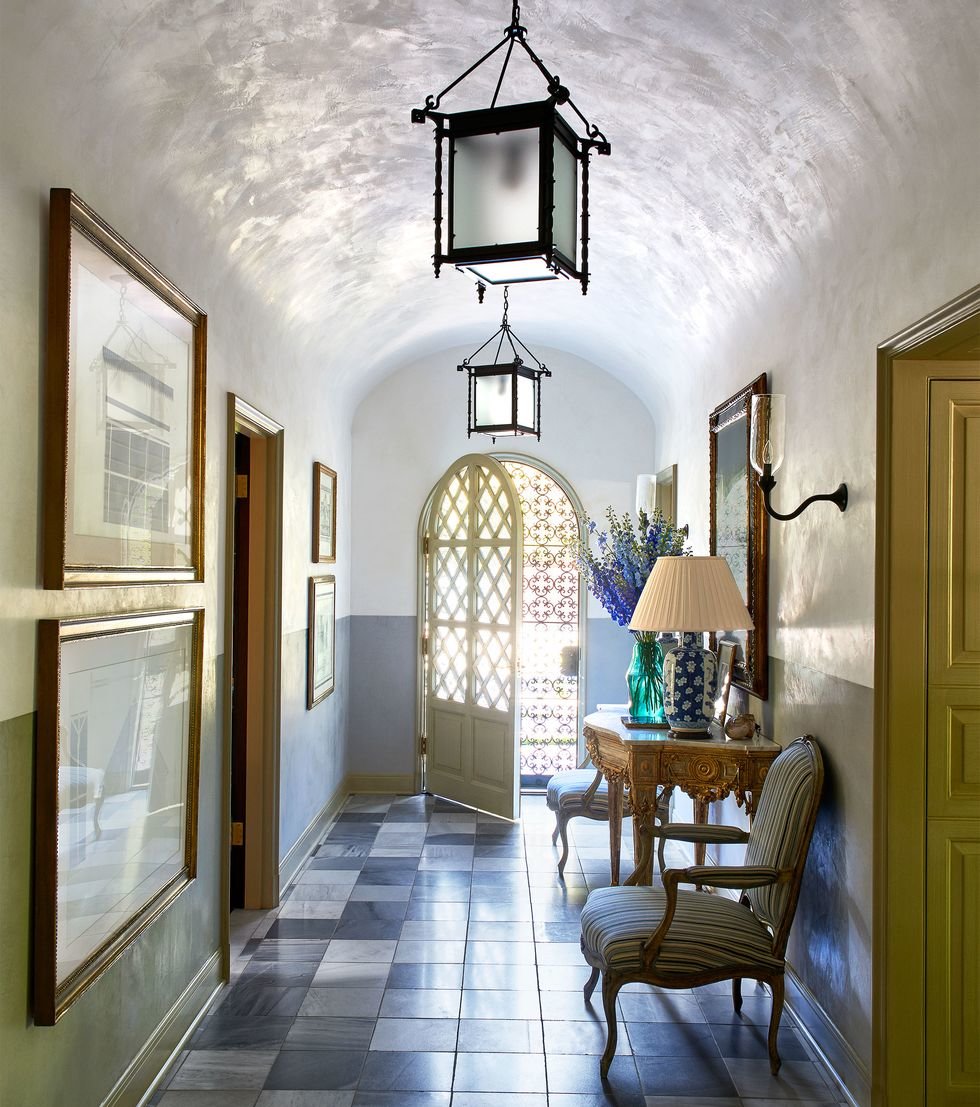 On the second floor, as part of the main-bedroom suite, the wife’s attached bathroom and study evoke the airiness of a French garden; the study walls are covered in a Zuber chinoiserie, the leaves and petals of which have been delicately painted onto the ceiling. On the opposite side of the main bedroom, “the husband had a very specific fabric in mind,” Smith says-a classic red-and-white toile pattern. Smith paired it with dark cabinetry and shelves to strike a masculine tone, echoed by the wood paneling of his study on the first floor. 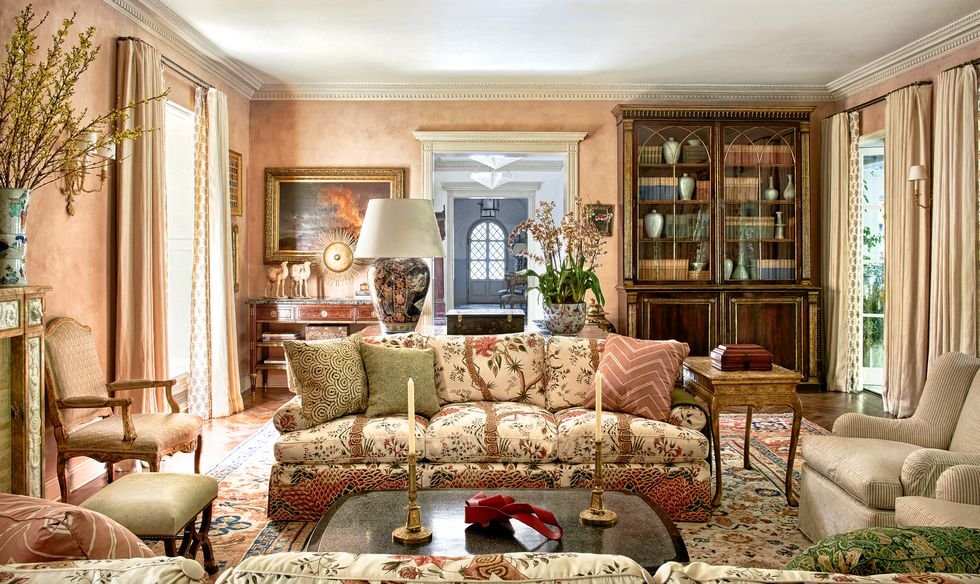 Alongside a robust inventory of antiques, newly commissioned pieces were inspired by the past, like the main bedroom’s re-creation of Hubert de Givenchy’s bed at his Clos de Fiorentina estate. In the dining room, the walls are covered in exquisitely patterned, embossed, and hand-painted leather, rising to the level of craftsmanship seen in the ornate gold frames of the antique mirrors and 18th-century oil paintings hung around the room. 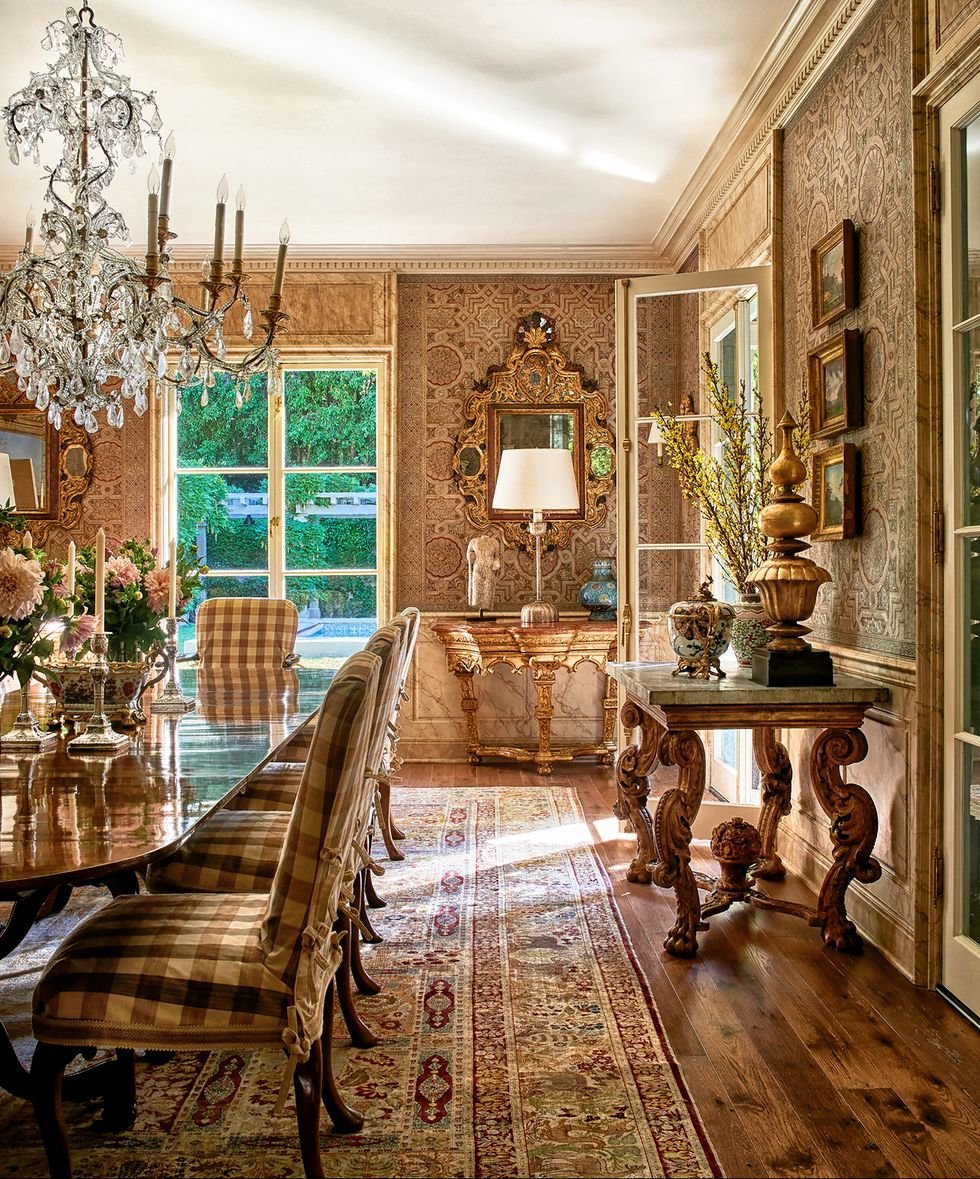 It was the couple’s personal history, however, that inspired the blue and white–tiled wainscoting of the garden room, a decidedly more relaxed corner of the ground floor where their grandchildren can play with their toys. In the late 1990s, they had owned a home outside Santa Barbara that Smith decorated as a traditional Portuguese country house, complete with azulejo-style tiles. “They loved them,” Smith says, and with that house having long been sold, he reproduced those tiles here. The patterns resonate with the blue and white of the couple’s English paisley upholstery. 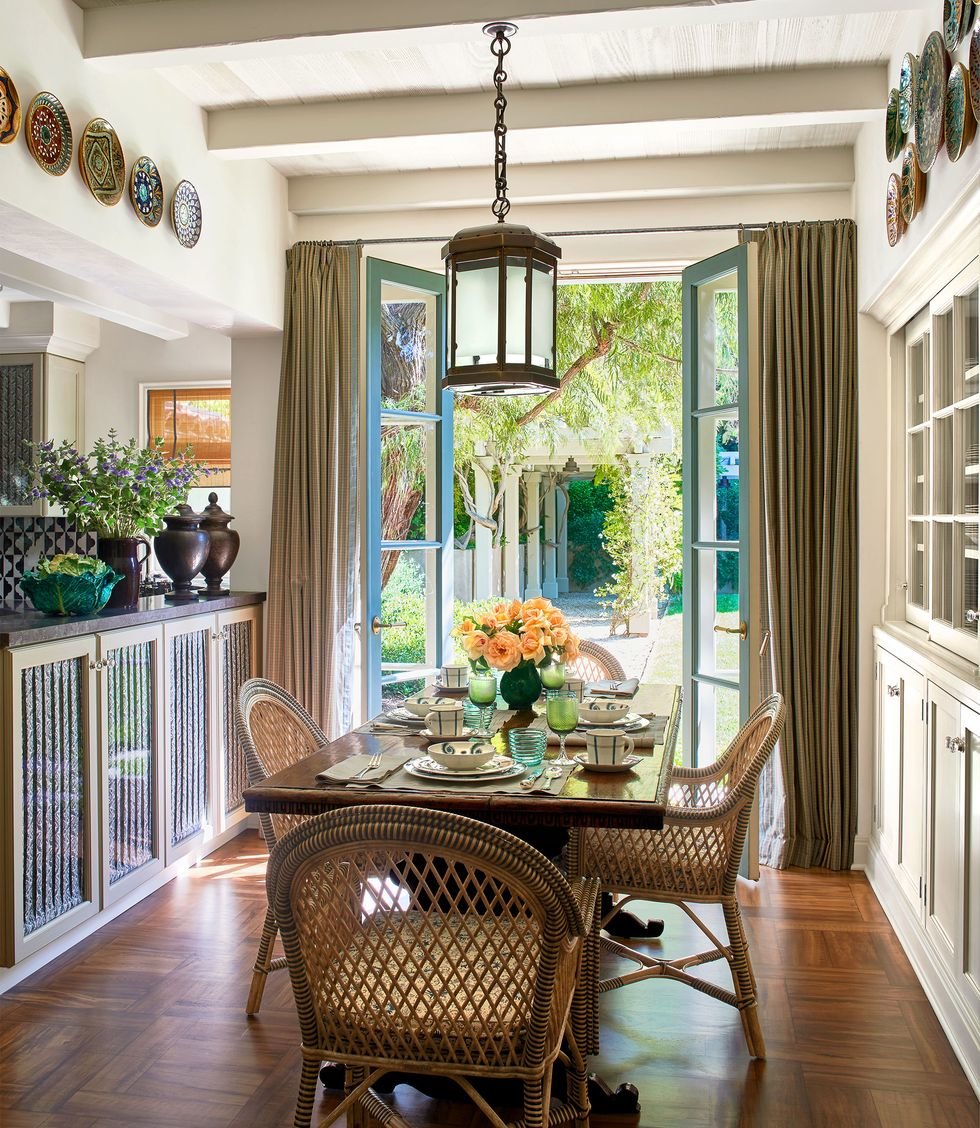 “Taking all these different pieces and fitting them together, it’s beautiful how they all work in a different context,” Smith says. As furniture follows you from home to home, he adds, “it’s the ultimate long-term investment.” Reflecting on the decades that he and his clients have shared, the same might be said of a good interior designer. 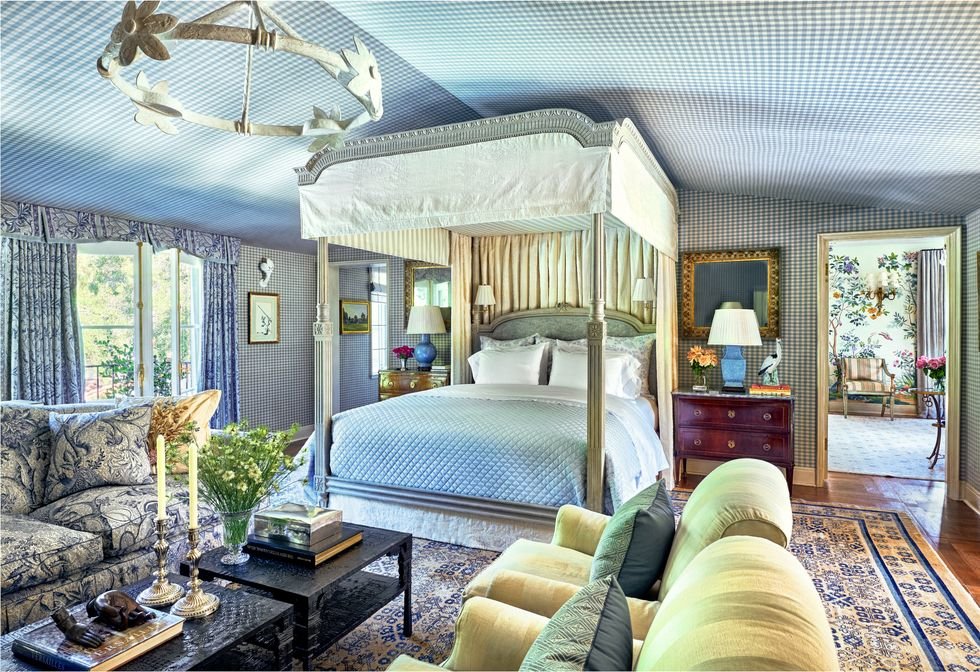 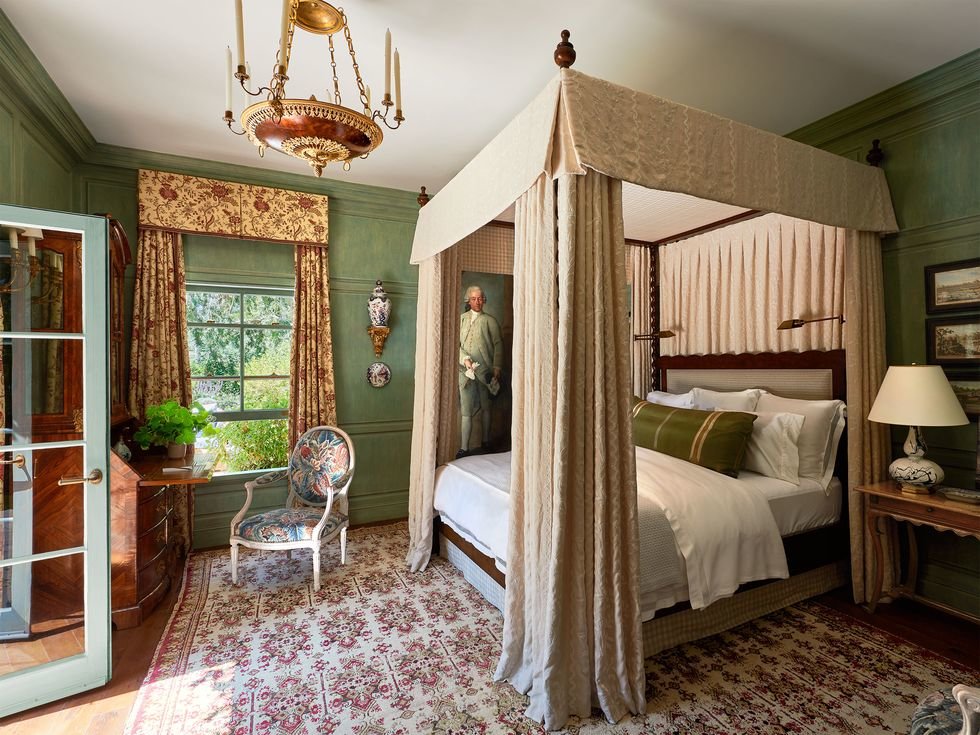