Privacy in Malibu is hard to come by. Most of the area’s commodious beachfront houses are packed close together, which is why Brad Lynch, principal and president of Chicago architecture firm Brininstool + Lynch, was intrigued by a residence that stood apart. The actual site of the 1955 residence is one of the first aspects that appealed to the client. "Situated on a flag lot tucked away by tall 20-foot-tall hedges, [the home is] a secret that only reveals itself once you get inside," he says.

In 2017, one of Lynch’s loyal clients asked him to fly out to Los Angeles to scope out the home, which he was keen to buy. "A lot of the properties in Malibu are relatively exposed, but this one is down a side road that gets you off the street. It’s rare to get this kind of quiet there while the Pacific Ocean is still within walking distance," says Lynch.

The home is nestled into a canyon and surrounded by the Santa Monica Mountains, and it was this dramatic setting that initially called out to Lynchขbut its distinct architecture captured his intrigue, too. "The combination of the low, sprawling midcentury ranch with a more than one-acre expanse of mature palms just spoke to us. Everything felt like it belonged right there and nowhere else," explains the owner.

The Malibu home, dubbed the Mariposa House, was built in 1955 by Frank Lloyd Wright protégé Alfred T. "Hap" Gilman, who was also known for his Spanish Colonial–style creations. Despite its rundown state, Lynch thought the residence was a stellar example of California modernism. The "good bones" of the structure, which flaunted a mix of earthy stone, wood, and glass, are also what impressed the client. Before: When the owner discovered the dwelling and its adjacent guesthouse, the property wasn’t in the best condition. However, he was immediately struck by the home’s simple palette of materials and believed in its potential to become a modernist showplace again.

Before: Leafy exterior pathways, a holdover from the old site, were beautifully reimagined for the 2020 renovation.

"It felt considered, not contrived," says the owner. "[There were] small courtyards for every bedroom, rooms with comfortable scale, [and a] low, flat, sloping roof. You could tell the original architect thought about how to put it together for living, not just for looking."

Given that Lynch and the client had collaborated on a number of prior projects, there was an ease to their communication about the Mariposa House renovation. Lynch understood from the get-go that one of the client’s priorities would be reinstating the dwelling’s midcentury vibe while seismically retrofitting it and making upgrades with sustainability in mind. 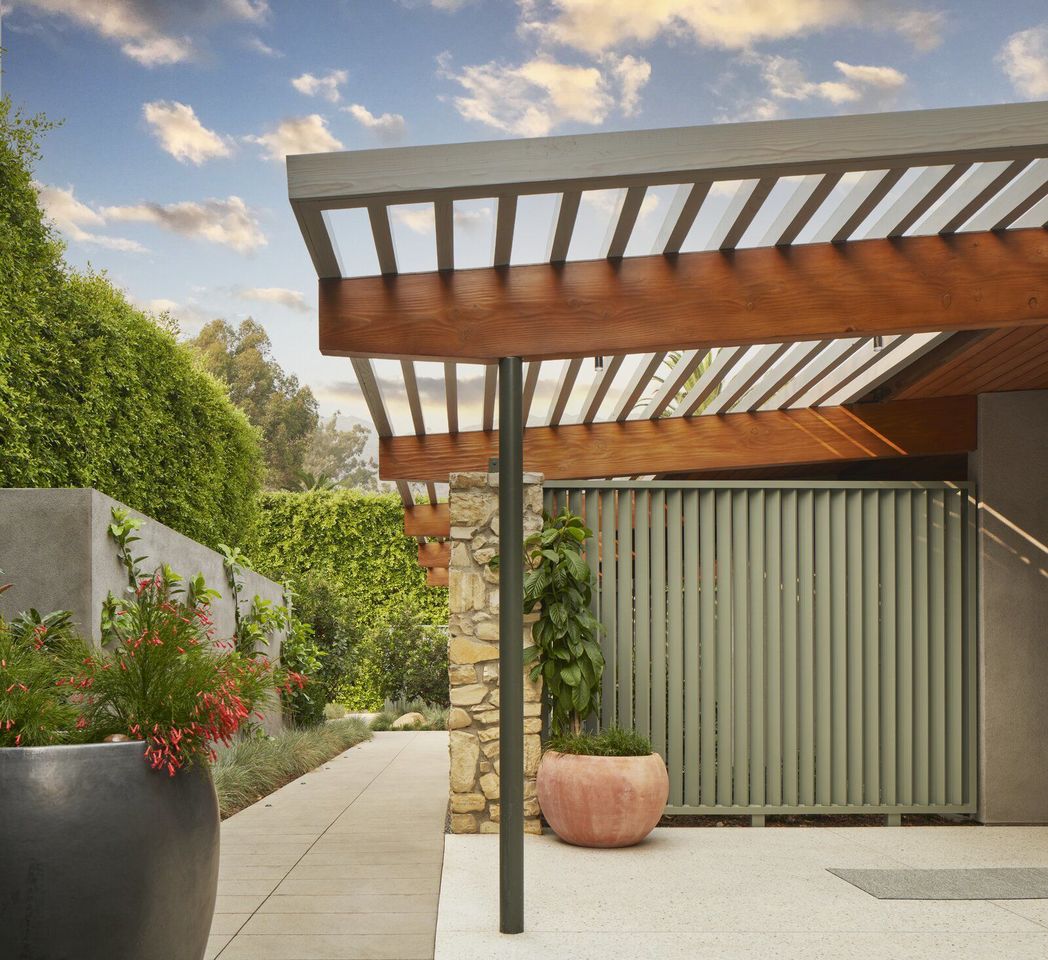 One of the highlights of the Mariposa House’s renovation is a new trellis complemented by heaps of lush vegetation. 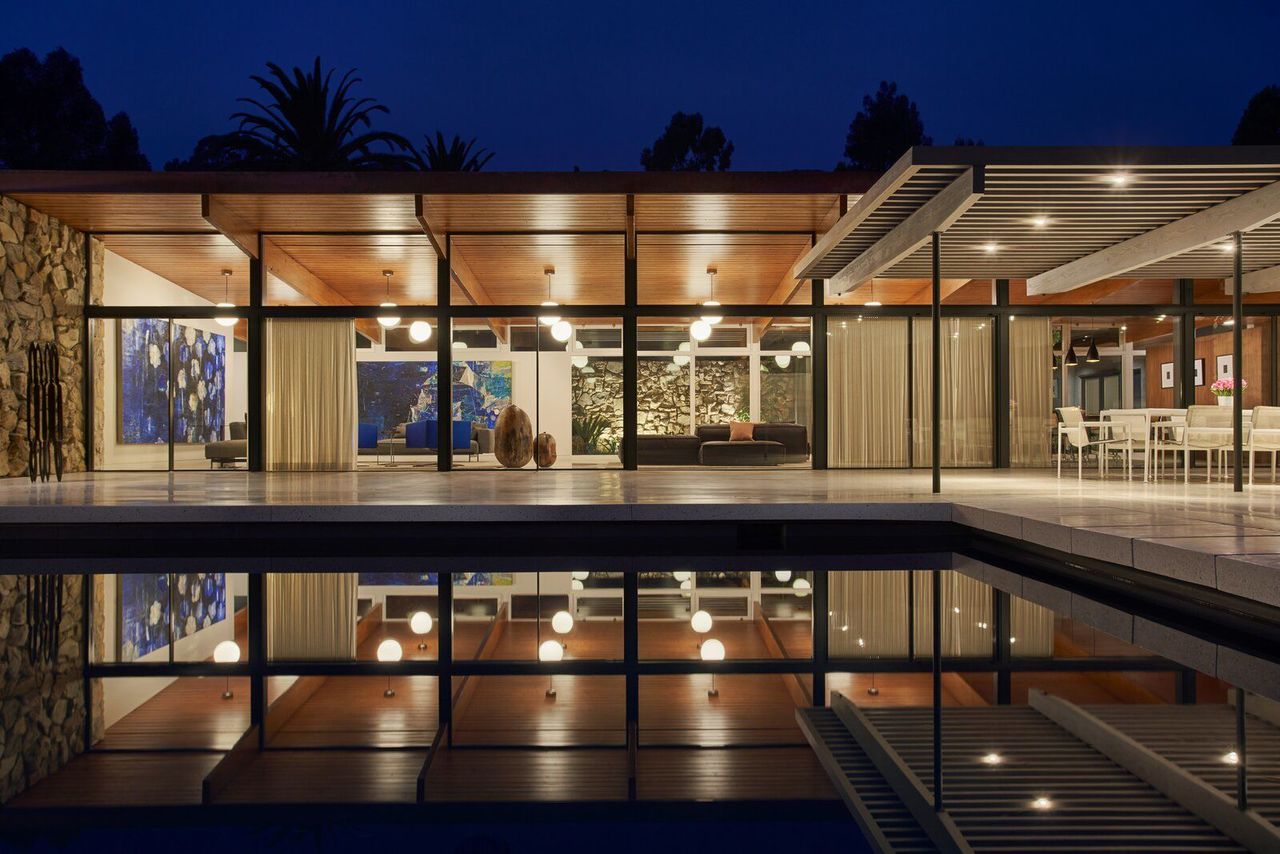 "We wanted Brininstool + Lynch to honor the original intent while transforming it into an even better version of itself," says the client. "Clean it up, balance it out, modernize the systems, create more views out to the landscape, and introduce one big, new element: A gorgeous whole-house terrazzo floor, to pull it all together." 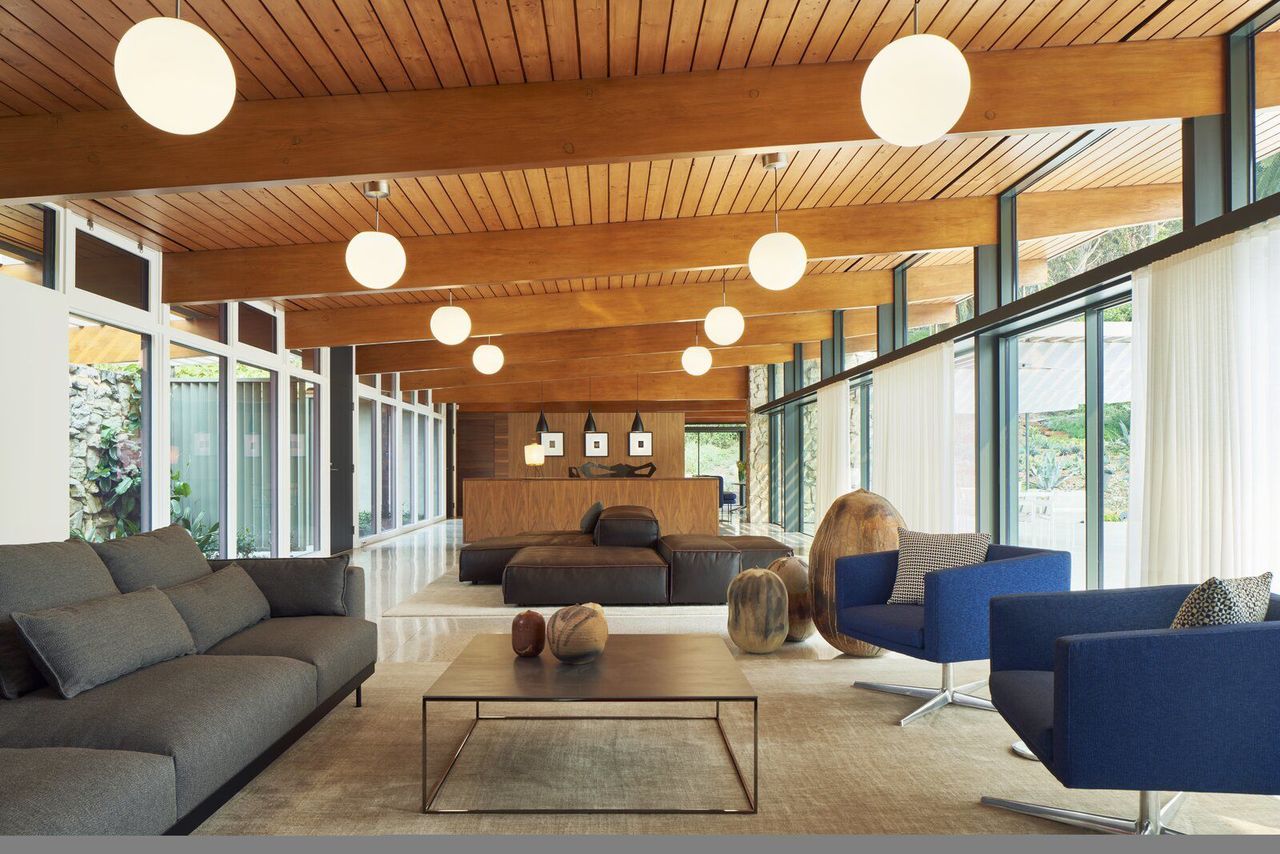 A duo of vintage Cubica chairs from Verzelloni and globe-shaped light fixtures set against warm slats of Douglas Fir elicit a retro spirit in the living room. 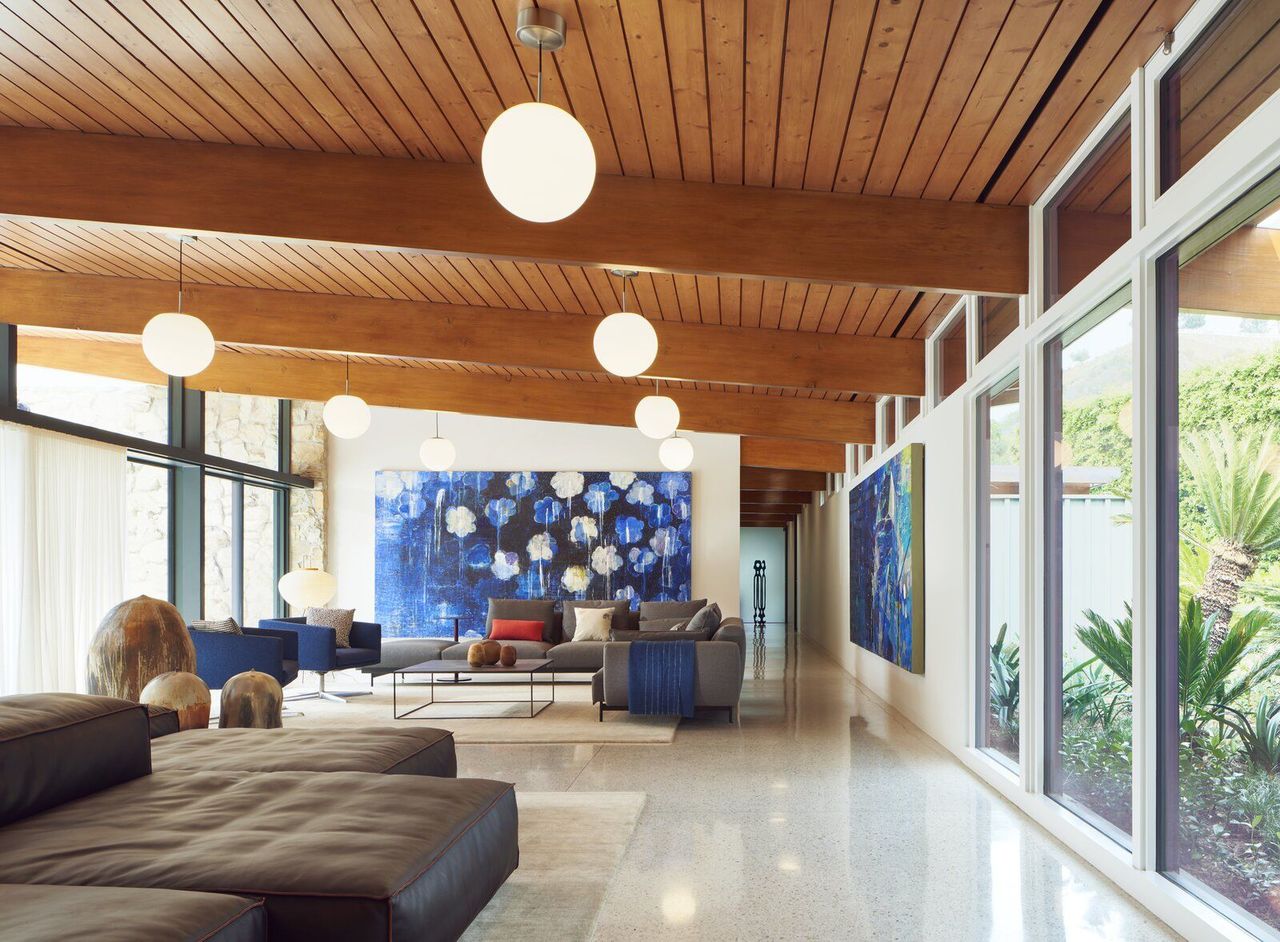 Behind the Muuto sofa, a dreamy but muted painting by artist Keiko Hara commands attention. 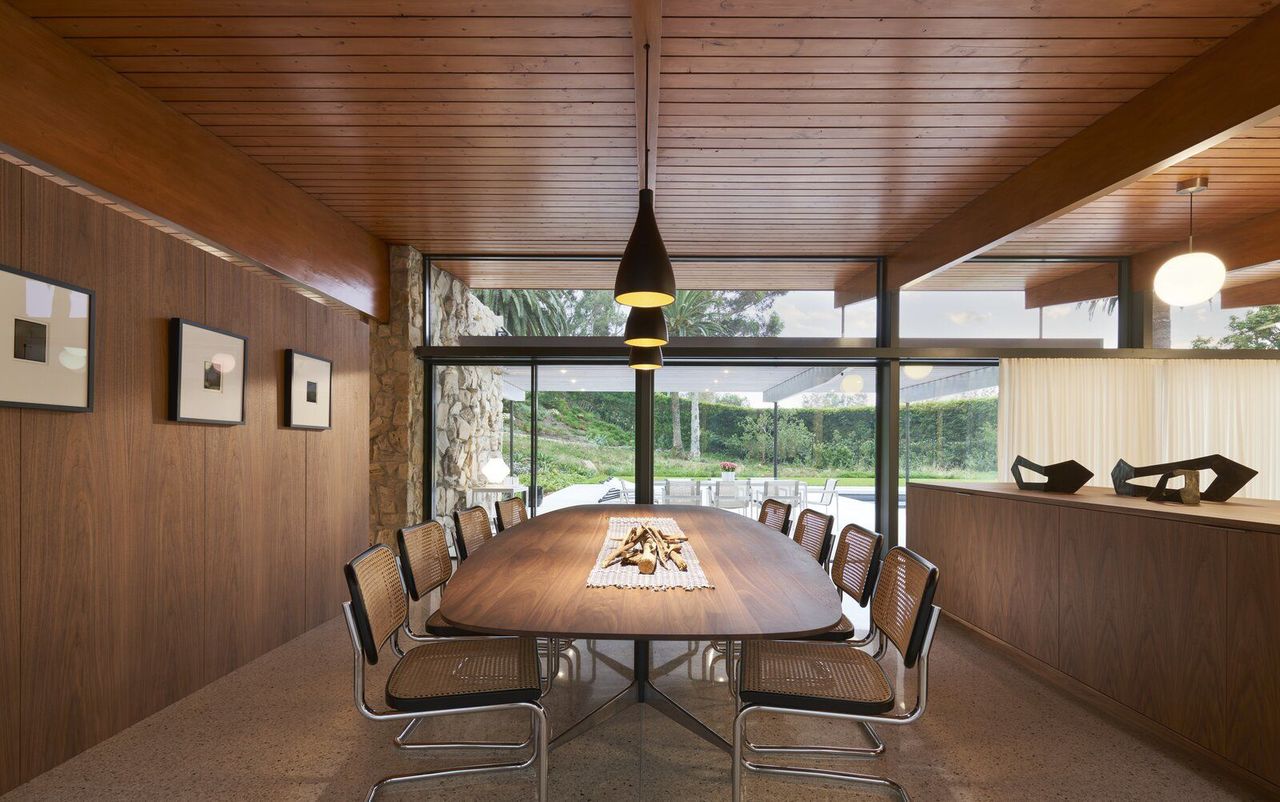 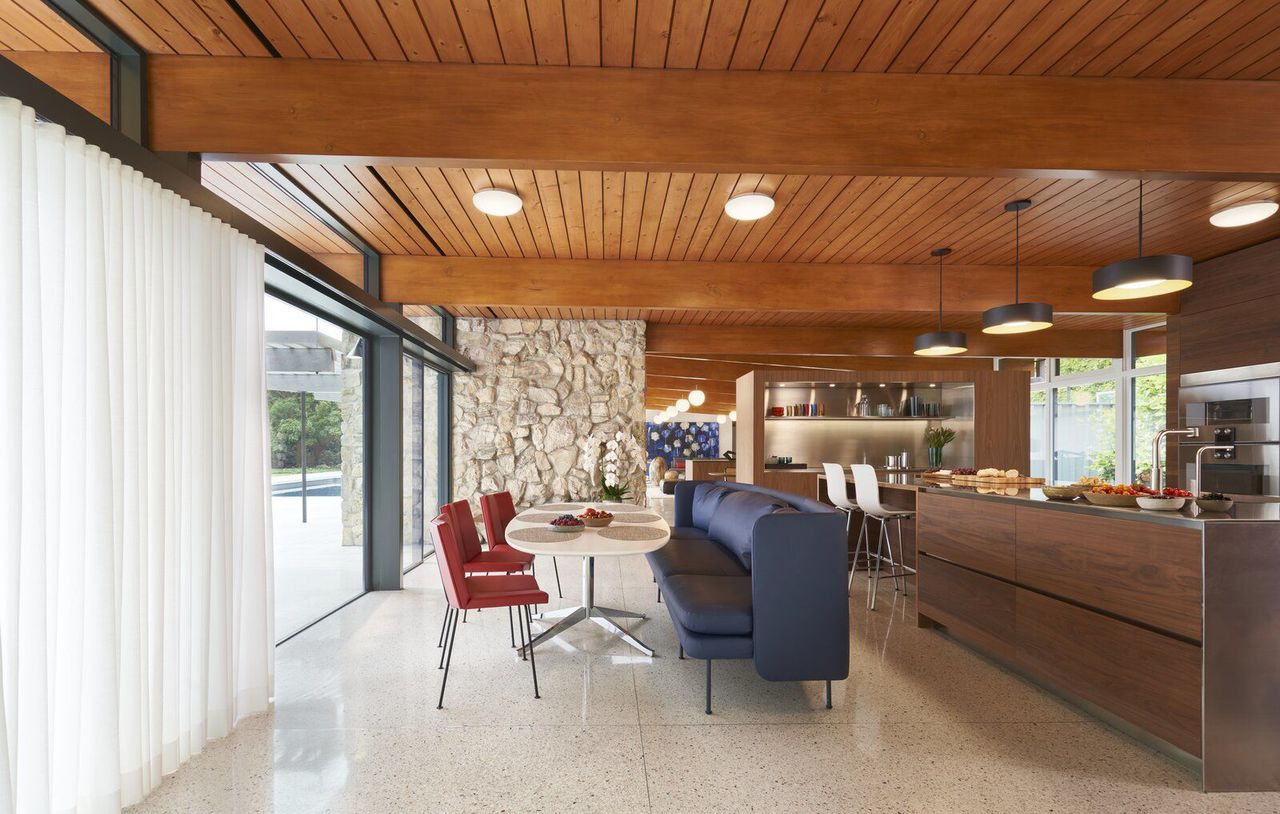 The new kitchen, which features banquette seating for laidback meals, is one of the owner’s favorite parts of the renovation. "There were very few parts of the house left standingขjust a few stone walls and beams that we thought we would have to replace but were able to restore by stripping down and adding a minimal stain that looks as natural as possible," recalls Lynch.

The owner wanted to maintain the warmth conjured by the home’s original Douglas fir tongue-and-groove ceilings, so Lynch replicated that same cozy feeling with a swath of new wood. 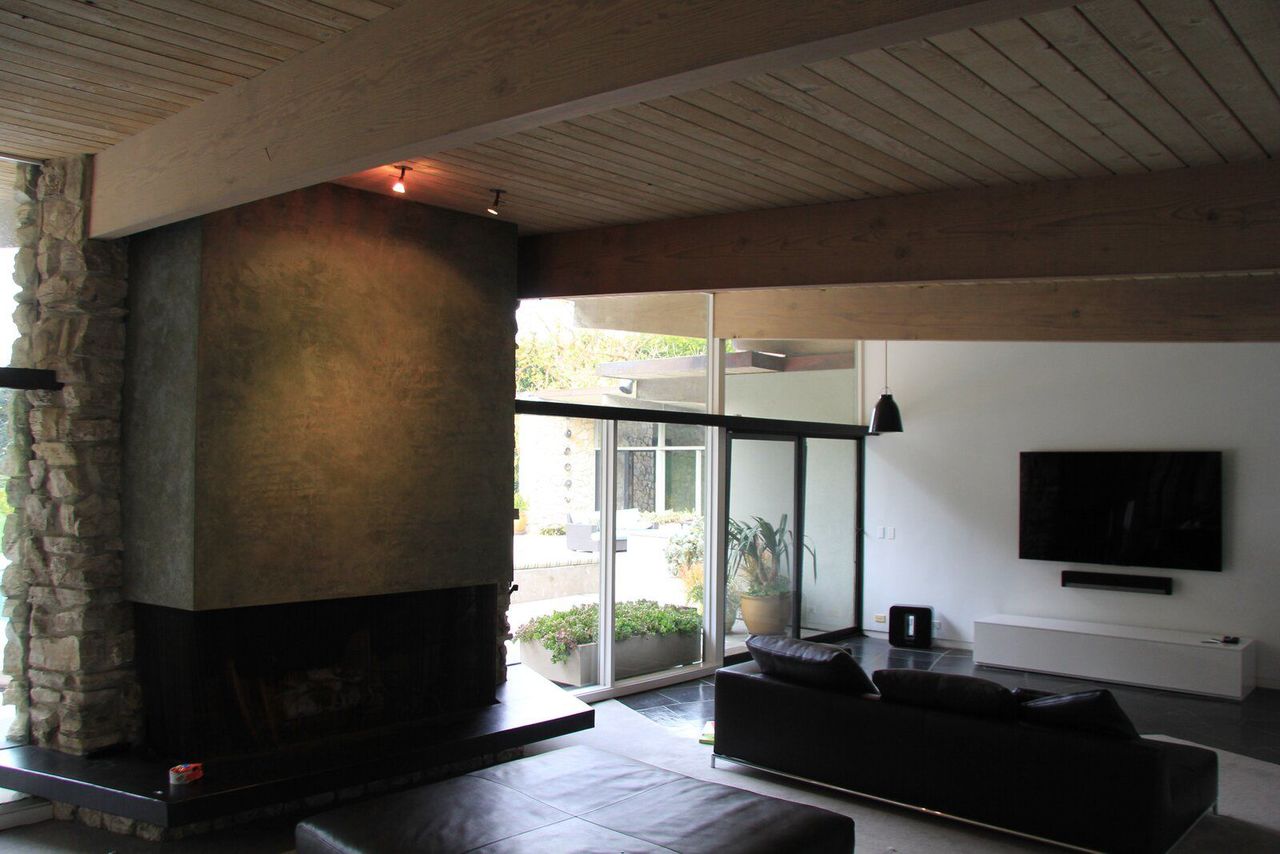 Before: In the old living room, a fireplace obstructed the gorgeous views, so it was removed and the stones were then recycled and incorporated into the new layout. 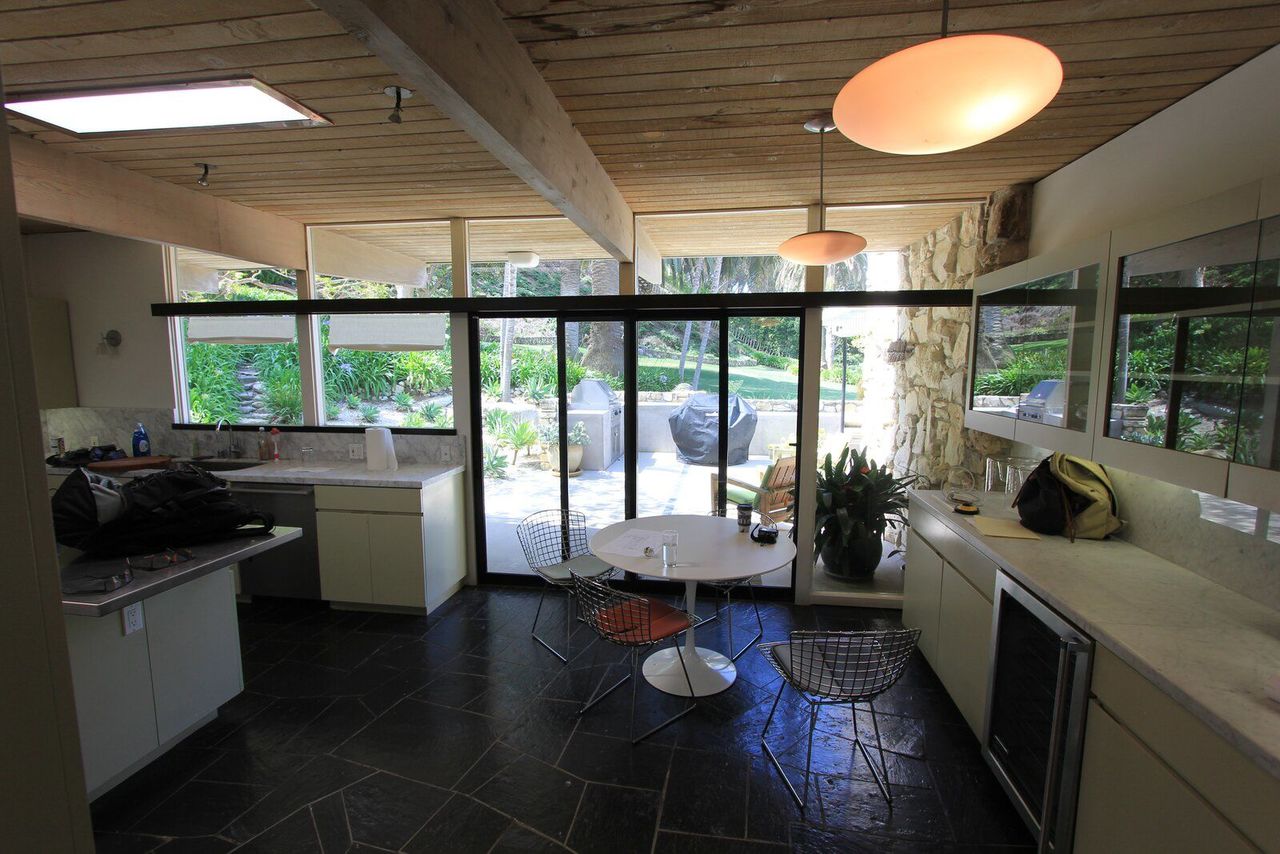 Expanding the connection to the outdoors was also essential to the client. Lynch amplified this relationship by ensuring the home featured copious glass walls and gardens rife with native plantings like California sycamore, California poppy, and Calistoga harrow, all pieced together by Santa Monica landscape architecture firm Pamela Burton & Company.

"The idea is really that the depth of the landscape becomes the predominant feature," explains Lynch. "[So] that when you walk into the home, you are comfortable and your eye is drawn outside." 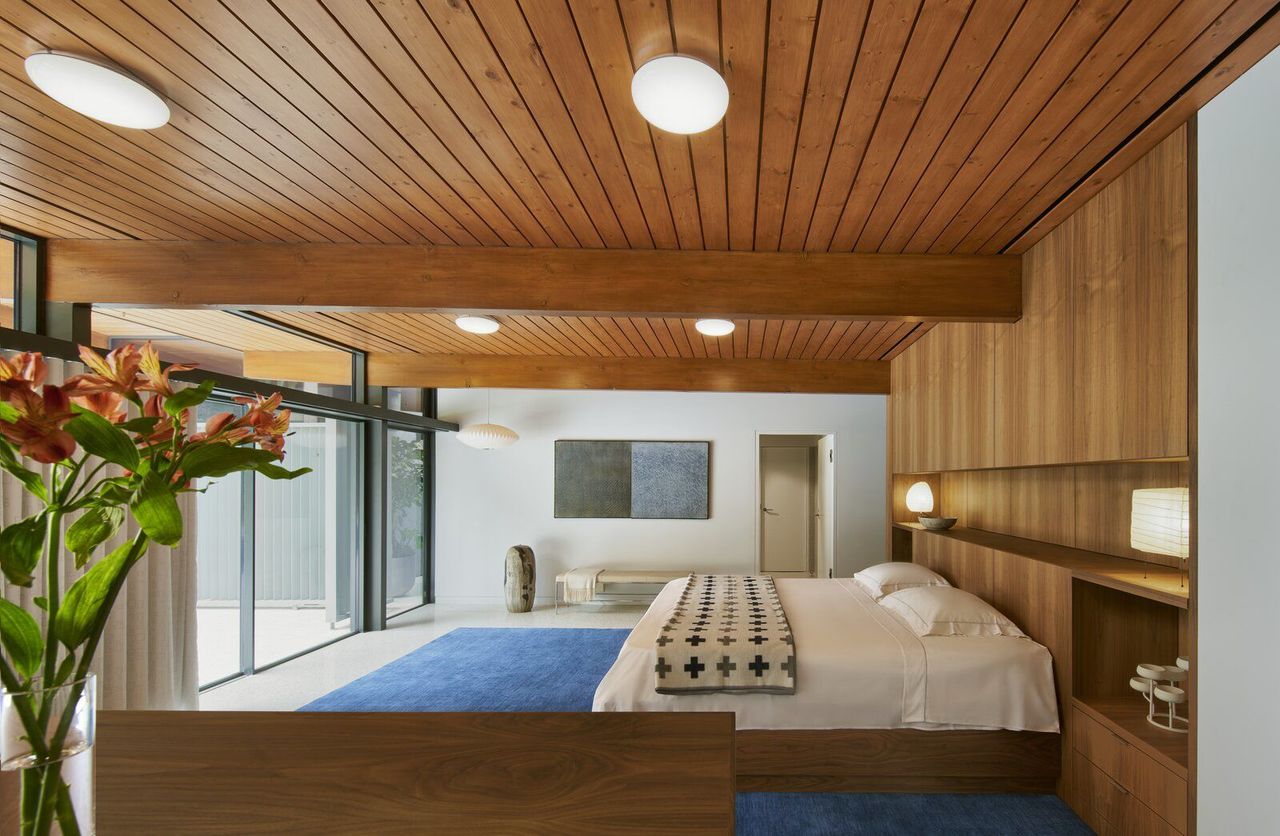 Custom walnut millwork, courtesy of Brininstool + Lynch, provides a crafted, minimalist touch in the bedroom that overlooks the pool. 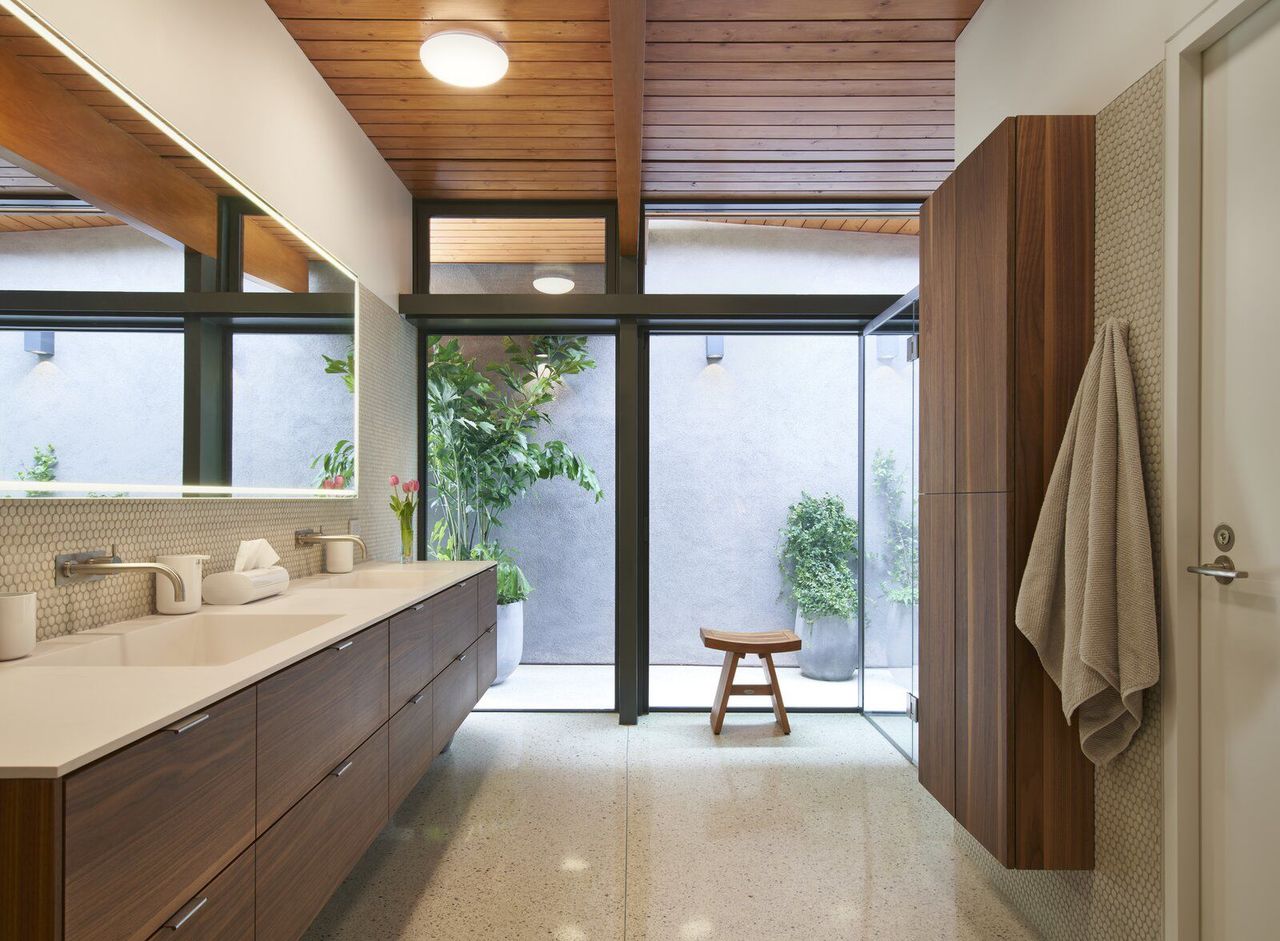 Greenery brightens a patch of outdoor space just off the main bathroom. New, glimmering terrazzo floors help make the indoor/outdoor transition feel organic, stretching across each room in the 5,574-square-foot home, and even out onto the hardscape.

"It is just spectacular; the warmth of the colors, the flecks of texture throughout," says the client. "The glass, the flowing curtains, even the little things, like the hidden integration of the forced air registers. The place is awash in thoughtful, respectful details where they matterขnothing feels overdone, nothing too precious. It’s lightweight and livable, perfectly integrated with the landscape, and a treat to spend time in. We’re fortunate." A floor plan of the Mariposa House in Malibu, California, by Brininstool + Lynch.