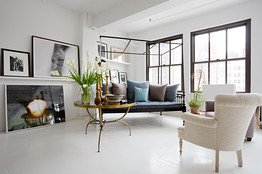 Two designers -- one of homes, one of wedding gowns -- create matching spaces.

In 1988, interior designer Vicente Wolf moved next door to bridal gown designer Amsale Aberra and the two embarked on an unusual design relationship -- one that has created a pair of matching lofts that reflect both their tastes and sensibilities.

In both apartments, located on the 11th floor of an industrial Garment District building, there are startlingly white concrete floors and walls painted Benjamin Moore Super White -- both Mr. Wolf's signature. Rooms are separated by flowing off-white draperies, an idea dreamed up by Ms. Aberra. The homes are accessorized with black and white photographs, artifacts from Ms. Aberra's native Ethiopia, furniture designed by Mr. Wolfe (including identical armchairs) and by still more white -- white candles in many shapes and sizes and always white flowers.

A few years ago, the pair collaborated on the hallway connecting their apartments, painting the walls and doors black, finding vintage light fixtures and sanding the elevator's interior steel door to create a brushed look. Realtors say the lofts are worth about $3.5 million each.

"We've known each other for 20 years. It's like masters that start to look like their dogs," joked Mr. Wolf, a tall, sardonic man dressed in grey and black who wandered in and out of Ms. Aberra's kitchen on a recent Monday, eating her muffins. Ms. Aberra, a petite 55-year-old wearing gray leggings and Uggs, teased Mr. Wolf about changing his 3,000-square-foot apartment around "at least every hour" and the two talked about their cross-pollination. "If I ever got married, I would wear one of her dresses...If I wore dresses," Mr. Wolf, 64, says.

The similarities can create confusion. Film producer Debra Martin Chase ("The Princess Diaries," "Sisterhood of the Traveling Pants") was caught off guard one recent night on her way to Ms. Aberra's when she mistakenly ended up at Mr. Wolf's door, peering into an eerily similar space. "I was thinking this is so New York," she says.

Both designers arrived in the U.S. under difficult circumstances. In the 1970s, after a revolution in Ethiopia led to the imprisonment of her father, Ms. Aberra was working as a waitress in Boston when she met Mr. Brown. The couple moved to New York. Mr. Brown purchased the loft in 1983, and Ms. Aberra got a degree at the Fashion Institute of Technology and turned to designing elegant wedding gowns when she couldn't find one she liked for her own wedding.

Now Ms. Aberra's company generates $25 million in retail sales a year with its three collections (Amsale, Christos and Kenneth Pool) and line of bridesmaid's dresses. Her clients have included Kim Basinger and Salma Hayek, and the Amsale gown worn by Katherine Heigl in the blockbuster 2006 season finale of ABC's "Grey's Anatomy" toured several museums and appeared on Oprah.