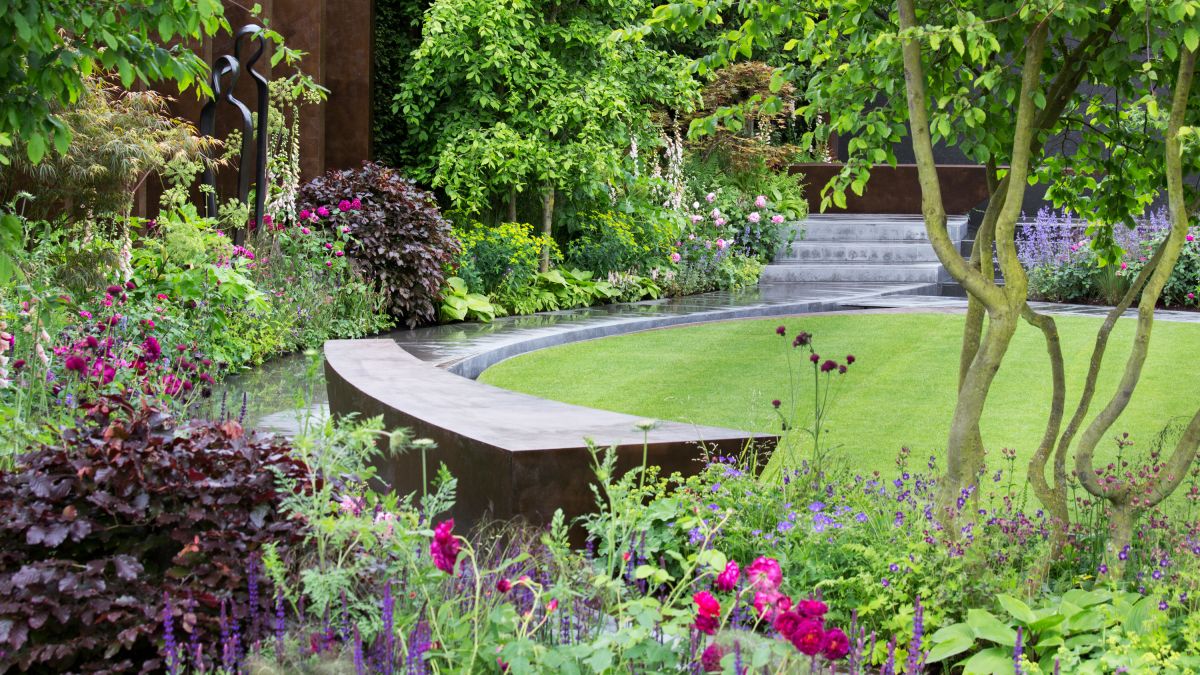 Gardens have never been more important to us. The pandemic has made outdoor spaces our havens and, for many months, our only source of entertainment. Yet the shift in the ways we think about and use our gardens began long before the pandemic.

For several years now, it's not just 'gardens', anymore. Instead, what many of us want is beautiful modern garden ideas that combine leisure, exquisite planting schemes, and sustainability.

The ways we design our gardens, what we do in them, and what we decorate them with has been influenced by prevailing fashions and changing lifestyles for decades. This year, as the Society of Garden Designers(SGD) celebrates its 40th anniversary, 10 leading garden designers and members of the SGD, reveal how tastes and trends have changed over the past four decades, since the Society was founded.

1. The shift to outdoor rooms

Probably the most profound change in people's garden design preferences has been the shift towards outdoor spaces that are styled as rooms rather than just green spaces.

'When I began designing 30 years ago” says James Scott, 'people viewed their gardens simply as a place to be ‘gardened’'. Over time, that perception has completely changed, he says, with gardens increasingly being seen as an extension to the house and offering the opportunity to be ‘styled' in the same way you might style a room.

As a result, 'garden design has grown up', says Juliet Sargeant, adding that they have become far more sophisticated and now incorporate a wonderful variety of materials, features, and plants that weren’t even considered 20 years ago.

Key to these, according to Andy Sturgeon, has been a gradual move towards the contemporary style of garden we know today with minimal use of materials and a more naturalistic, wild, and informal approach. Andrew Wilson agrees: 'We have developed a new Modernism in style', he says, 'with a move to bold color and simplified palettes.' 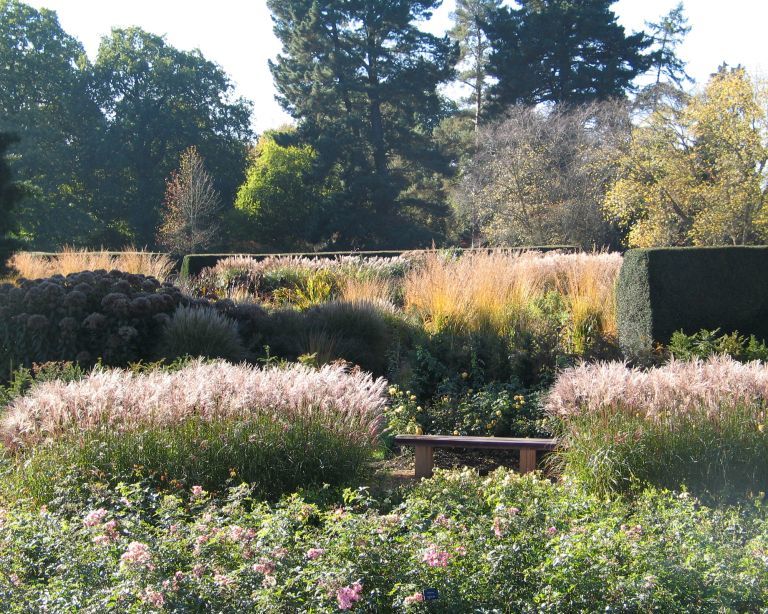 It is undeniable that rewilding has become one of the biggest garden trends in recent years, with more and more gardeners opting for wildflower meadows instead of neatly manicured lawns, and looser, more relaxed planting schemes that seem a million years away from neat borders our grandparents would have praised.

Plants, more than any other aspect of a garden, are followers of fashion. From the traditional herbaceous borders of the 1980s and 1990s to the New Perennial Movement of the late 20th century and the unstructured wildlife-friendly aesthetic popular today, 'you can date a garden by the plants that have been used' says Sarah Eberle.

'When I started out, shrubs were the backbone of everything anyone did. Perennials were a sideshow, points out Andy Sturgeon, who designed his first garden in 1983. 'Today wildflower meadows, new perennial planting, and grasses have taken center stage.' 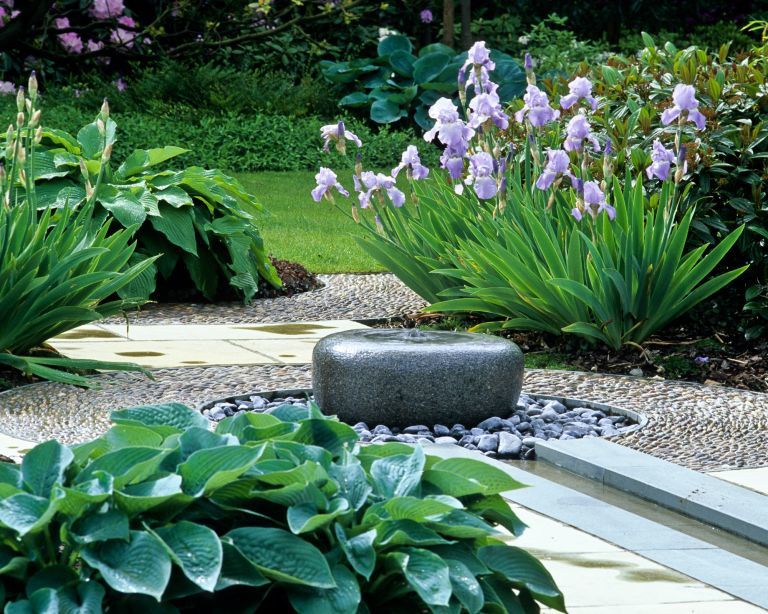 Unsurprisingly, a burgeoning appreciation of the role gardens play in protecting the environment, has led to a shift in the type of materials being used too. 'With sustainability at the forefront of our minds now, high quality, environmentally-friendly products such as porcelain and composite decking have been game-changing', says Andy Sturgeon.

'York stone seemed to be everywhere in the late 90s', says Andrew Wilson. Now, the provenance of garden materials is becoming increasingly important with many more people thinking about where materials come from and only using locally sourced materials.

'We use more indigenous stone than ever before, says James Scott and 'far less Chinese or Indian stone' that needs shipping around the world. Sarah Eberle has gone one step further. Since she began designing gardens 40 years ago, she says she has reduced her use of hard landscaping altogether favoring a softer, more ecological approach instead.

4.Getting creative with smaller gardens 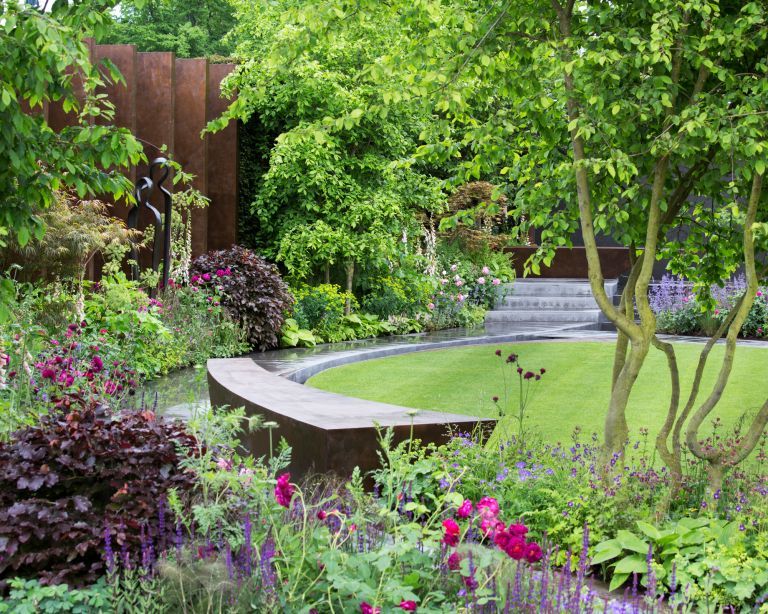 With the average house and garden getting smaller year on year since the early 80s, garden design has inevitably had to adapt. Small garden ideas are incredibly popular right now, with gardeners keen to make the most out of even the smallest patch.

'Clients expect a great deal from a small space' says Andrew Duff. 'In a large garden you can create journeys, both visual and physical, but this has become more difficult as gardens have become smaller.'

James Scott has noticed a trend towards more zoned areas as a way of meeting the different needs of a household, while Jo Thompson has developed a multi-functional approach to her designs. 'A buttercup-filled meadow is a view, a seat is a piece of art, a rill is a wine cooler, a weeping birch is a shady picnic spot', she says.

5. Making space to relax and play 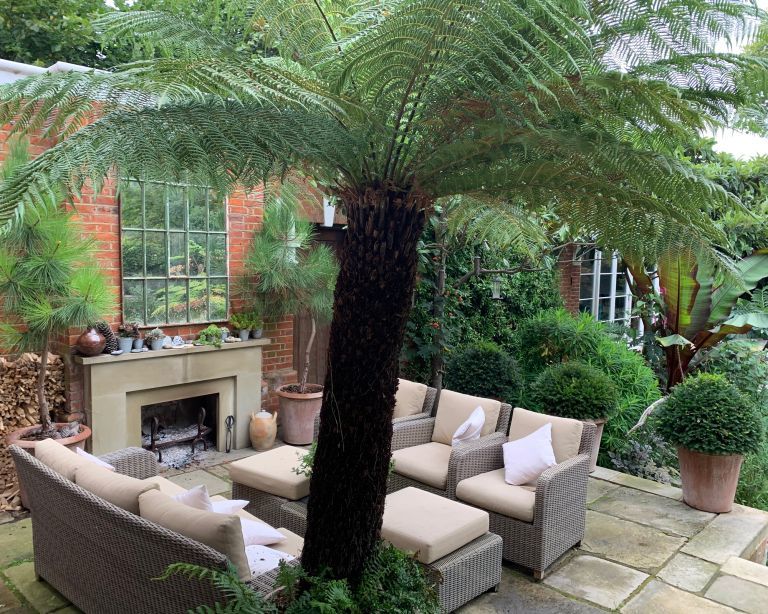 Put simply, gardens used to be mainly something to look at. Nowadays, we think of them as spaces where we take out leisure. If the 50s were all about ornamentation and decoration in the garden, the 80s was the decade that paved the way for the concept of recreation in our outdoor spaces. Since then, the popularity of recreational garden features has continued to soar.

'Long gone is the built-in brick BBQ, the terracotta urn placed on its side amongst pebbles dribbling water and the gazebo in the corner of the garden', says Robin Templar-Williams who began designing gardens in 1986. Instead, due in part to a warmer climate, we are seeing the rise of outdoor kitchen ideas, says Sarah Eberle.

More elaborate entertainment areas have also become more and more popular, to march people's dreams of a multi-functional garden, says James Scott. 'Outdoor seating areas have really caught people’s imagination in recent years, with features like the firepit extending the use of the garden later into the evening and into the colder months.'

6. From purely ornamental to sustainable planting 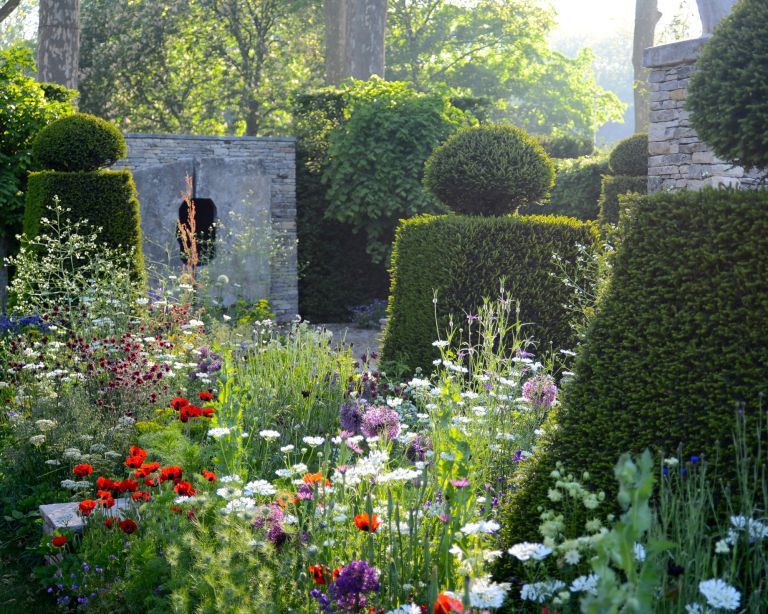 Gardens have not always been as green as they appear but a renewed focus on climate change as we moved into the new millennium, has meant more people are now aiming to create sustainable gardens with minimal harm to the environment.

'A greater understanding of biodiversity has definitely made people re-evaluate their priorities in recent years,' says Cleve West. 'With many more people aware of the issues when it comes to designing their gardens.'

'We have seen an understandably greater respect for sustainability and environmental issues,' agrees Andrew Duff. 'With a return to a more natural way of designing demonstrated by the careful choice and appropriate use of plants and planting compositions.'

'People are starting to consider garden planting as more than purely ornamental and as part of a habitat' says Andrew Wilson. Jo Thompson, whose designs have always had sustainability, climate change, and biodiversity at their heart, has noticed a significant change too. 'Whilst clients used to sometimes greet these concepts blankly, it is now at the heart of every initial conversation I have.' 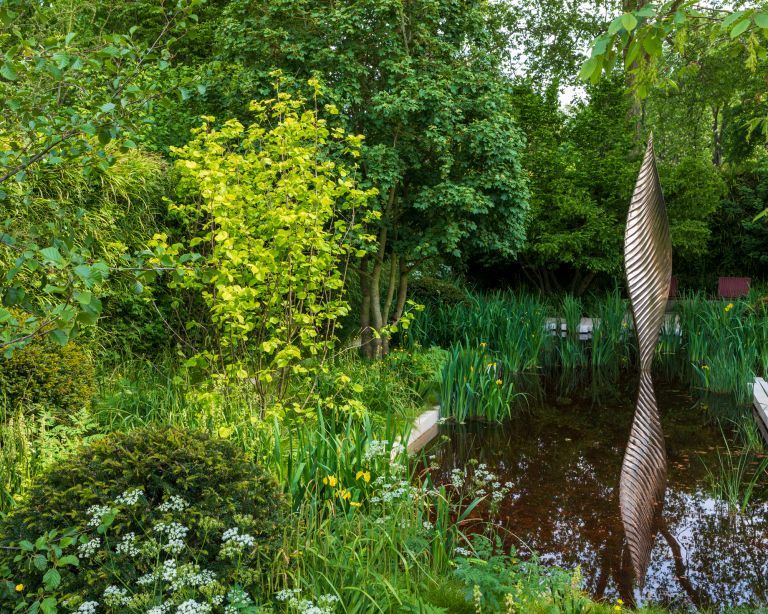 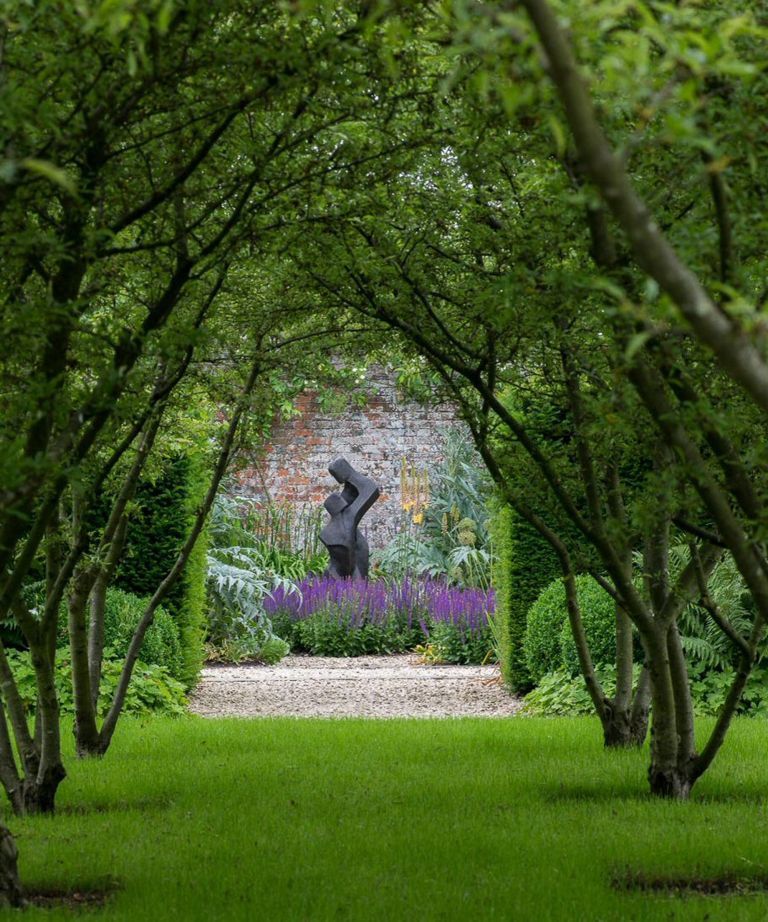 Perhaps the most significant change in recent decades then has been our attitude to garden design itself. Hiring a garden designer was once thought of as an exclusive preserve of the wealthy but is fast becoming the norm for anyone who wants a nice-looking garden.

'When I started out people literally didn’t know what a garden designer was', says Andy Sturgeon, who credits Terence Conran and IKEA for teaching people the value of good design. 'Now everyone knows what we do and understands the benefits it can bring. Today, the attitude and vision of clients have allowed us to design some amazing gardens that were unimaginable years ago.'

'Over the last 40 years, garden design has entered the popular consciousness', agrees Debbie Roberts. 'In the 1980s it was very niche but soon, a well-designed garden will be as important as a well-designed kitchen.' We couldn't approve more.