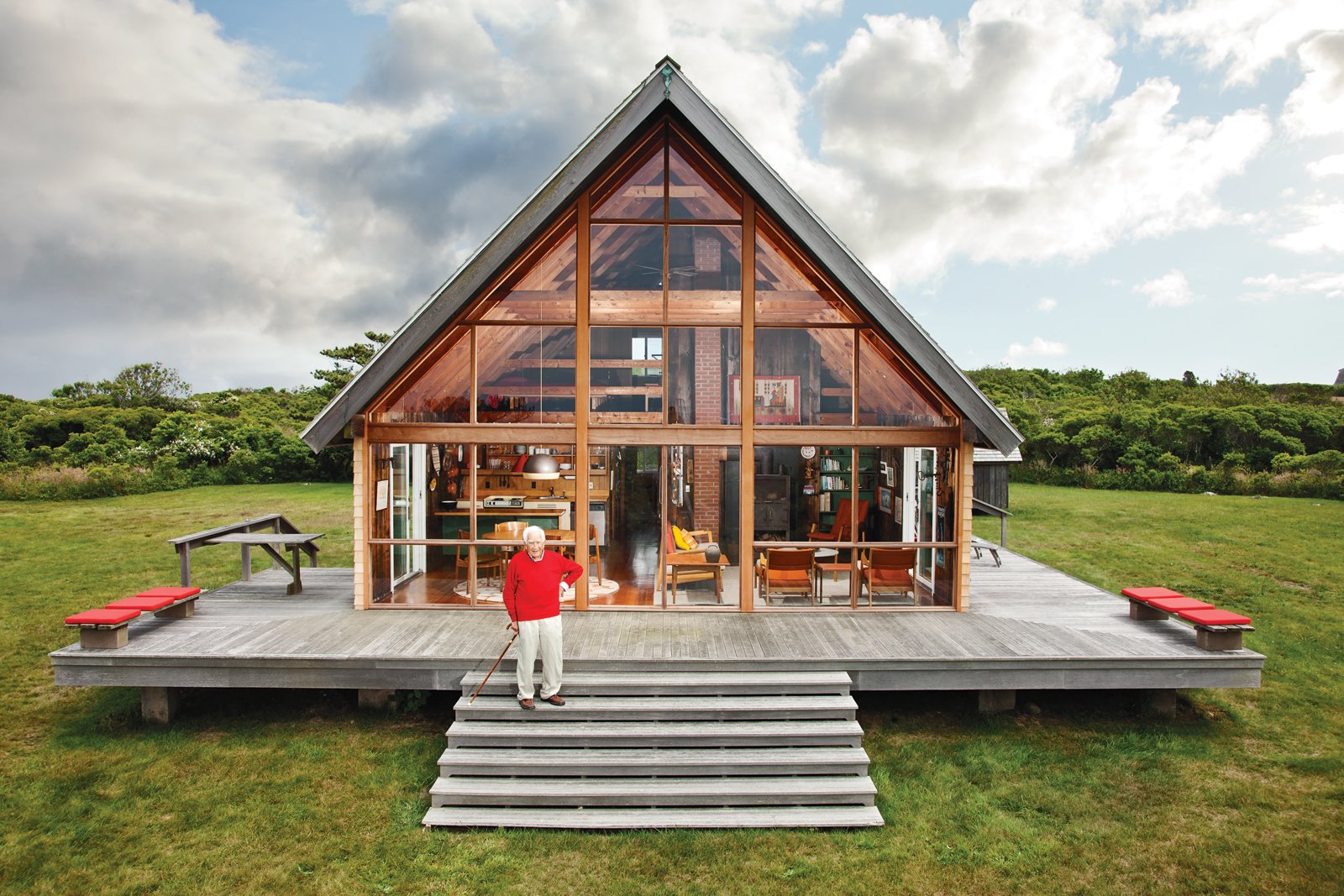 Designer Jens Risom returns to his 1967 prefab off the coast of Rhode Island, readying it for his family's next generation.

"The popular magazines were all saying that one couldn’t build a summer home for less than $25,000," recalls Jens Risom, seated comfortably in a chair of his own design inside his home in New Canaan, Connecticut. "So I contacted Life magazine and said, ‘well, I have one.’" 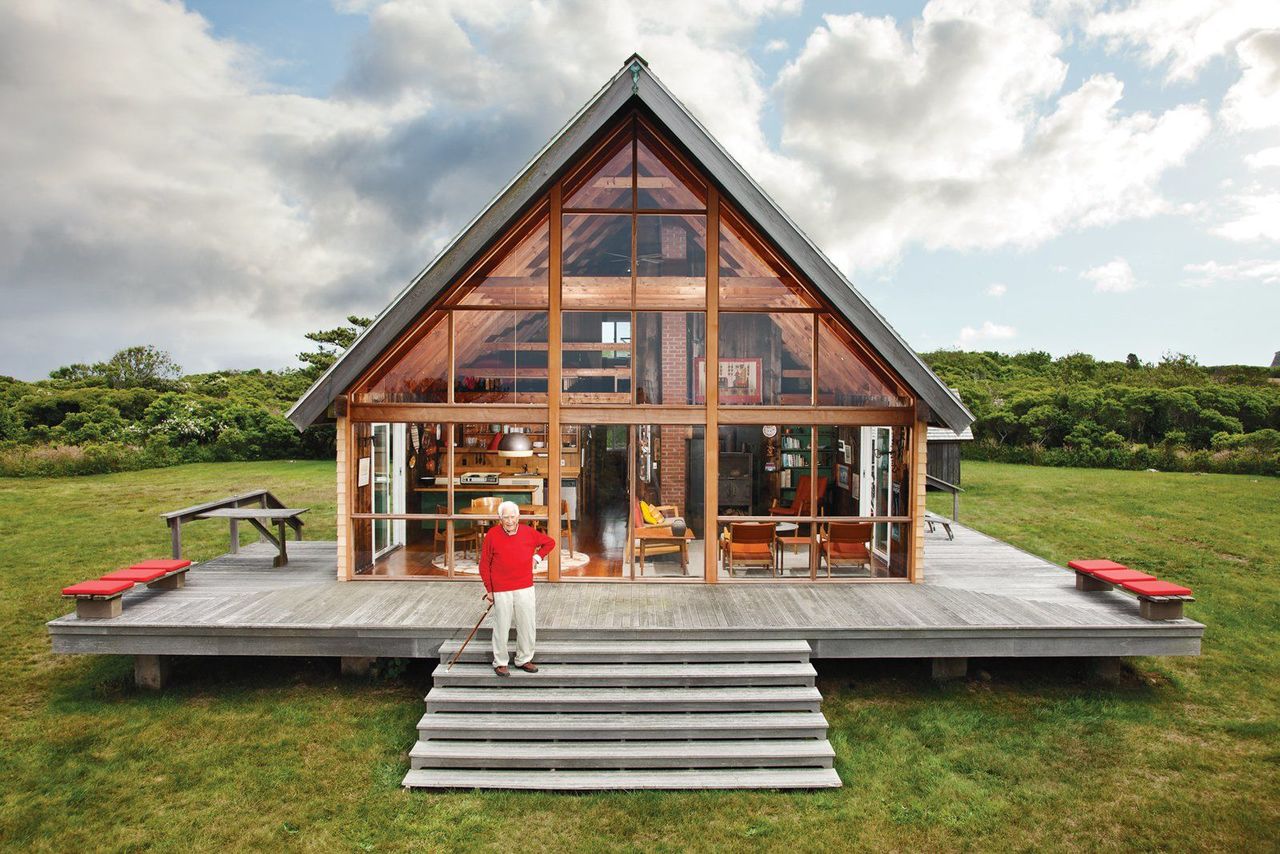 Mid-century designer Jens Risom's A-framed prefab family retreat, located on the northern portion of Block island, is bordered by a low stone wall, an aesthetic element that appears throughout the land.

Life magazine was impressed, not just with the project but with Risom himself-at that point, the designer had already won decades of accolades in modern furniture circles. The resulting article, a lushly photographed ode to Risom’s customized A-frame that he sourced from a catalog and had delivered in pieces to his remote island site off Rhode Island, helped to raise the aesthetic profile of modular construction. At the time, prefab suffered from a public-perception problem-the post–World War II housing boom and the subsequent need for quickly produced, kit-assembly structures had given the landscape of "ready-mades" a "dreary sameness" and a "cheapjack reputation." Risom’s structure, with its use of weathered wood, soaring cathedral ceiling, and expansive openness tied to its bucolic location, set a new standard for what prefab could look like. 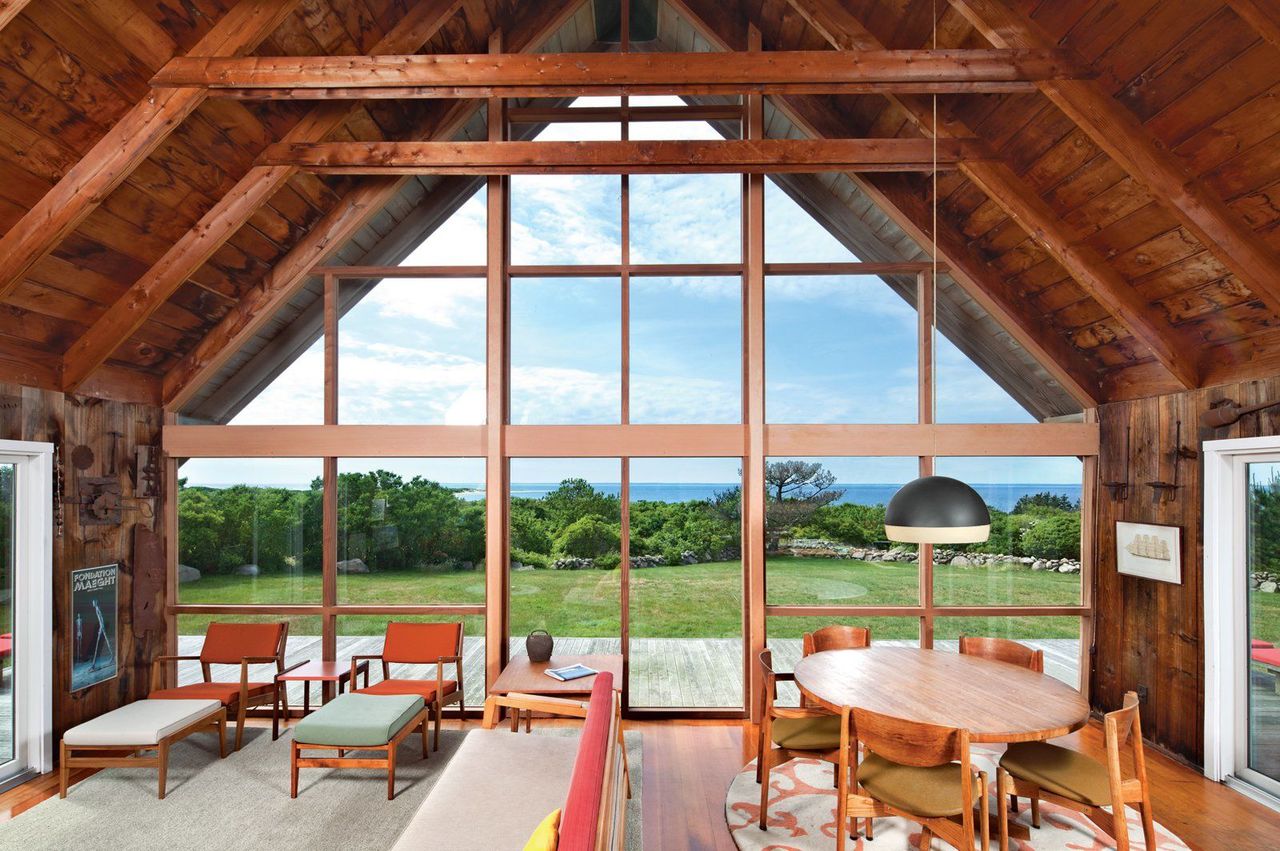 In the living and dining area, where mostly vintage Risom furnishings share space with a few new additions, the view facing north is framed by the wall of glass.

For Risom, however, there was nothing earth-shattering to the design. Risom, born in Copenhagen in 1916, spent his boyhood summers in a similarly simple structure in Fredensborg, Denmark. He warmly recalls a childhood spent among family in the countryside, far from city life. Risom was also heavily influenced by the ideas of his father, a successful architect who wrote a book on a stamped-earth building technique intended as a site-specific, low-cost alternative for people who wanted to build their own homes. Risom strongly believed in the personal freedom found in building a home from a tailored kit of components. "Architecture, to me, is the most beautiful of the arts," Risom explains. "But I watched my father struggle with the challenges, what was to me an enormous drawback: The architect did not fully drive the end product. I always knew that I wanted to design, but only [if I could] create products over which I had total control." 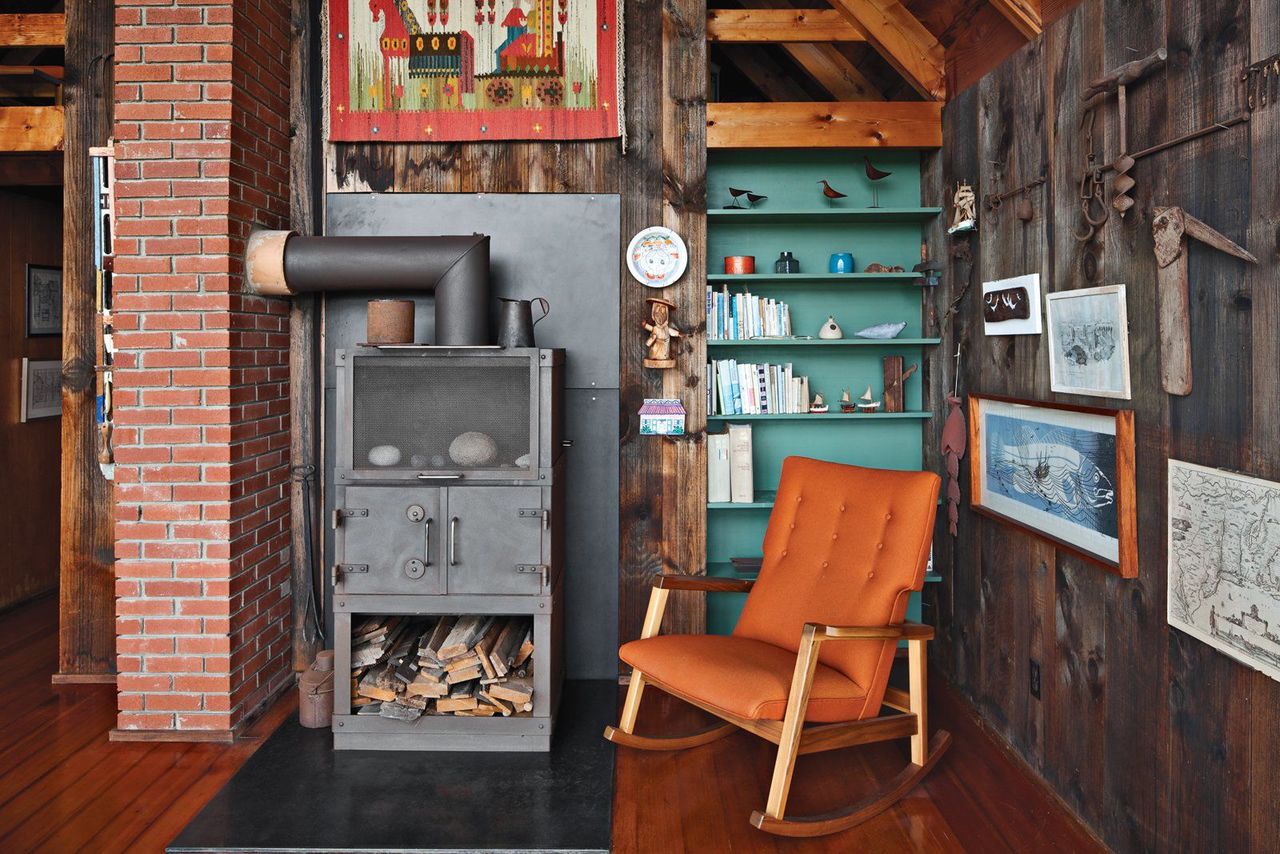 Inside the house, a relatively new Rais wood-burning stove is next to a Risom Rocker from Design Within Reach, a 2009 piece from the designer.

Risom’s quest for absolute design ownership, from conception to completion, has driven his long career. After graduating from the Royal Danish Academy of Fine Arts, Risom cut his teeth working for architect Ernst Kuhn and the Stockholm-based department store Nordiska Kompaniet. From there he decided to pursue contemporary furniture design in the United States. By the late 1930s, he was in Manhattan, looking for a way into the business. He crossed the path of the respected designer Dan Cooper, who offered him a job creating textiles. Though conceiving patterns wasn’t Risom’s focus, he soon was able to introduce furniture pieces to the showroom, helping to raise Cooper’s profile and winning sought-after commissions. Risom’s fresh talent proved to be beyond Cooper’s staid milieu, and in short order Risom had a coterie of high-profile admirers in the design world flocking to the Cooper showroom to commission his work. In only a few years, Risom, realizing that as long as he worked for others he wouldn’t control the process, parted ways with Cooper. He then helped Hans Knoll launch his inaugural furniture collection, the 600 Series, gaining yet more acclaim. World War II intervened, and after Risom spent a few years serving abroad, he finally returned to New York to produce his own work under his own name. 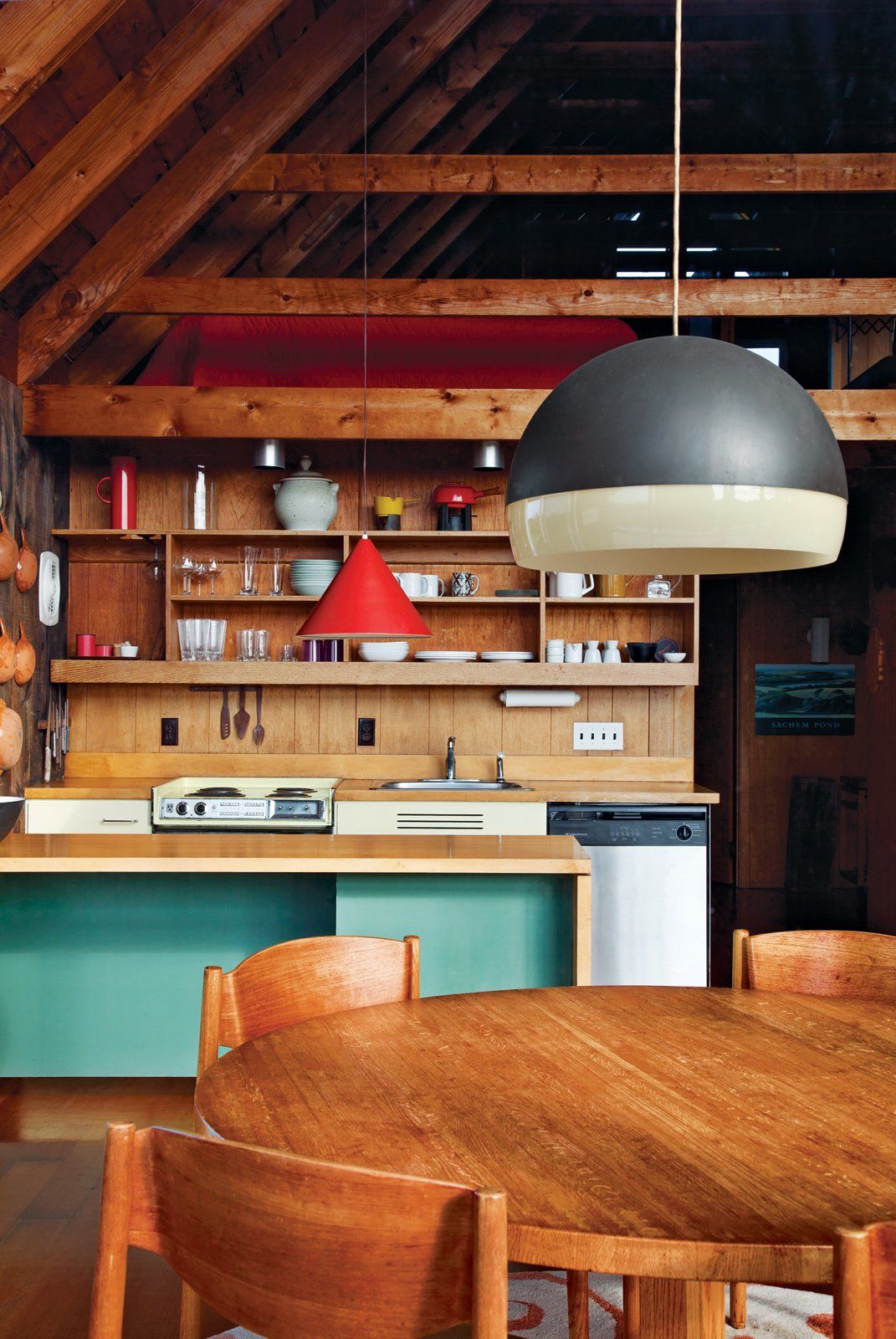 An original dining table and chairs are located in front of the no-frills kitchen, which is nearly exactly as it was when it was first installed. The shelves hold knickknacks and serving ware, nothing precious.

By the late 1960s, Jens Risom Design employed hundreds of people. Risom, his wife Iben, and their children lived in New Canaan, Connecticut, but spent summers renting on Block Island, an informal seaside locale that reminded them of their native Denmark. After a few years, Risom found a prime spot on the northern portion of the island on which to build. Risom spent much time researching different options for buying a systemized kit of parts, mindful of finding an economical solution that could stand up to the island’s intense gales of wind. He finally found a Massachusetts-based company called Stanmar that produced a sturdy model costing $20,700 that could be customized to Risom’s exact specifications-including cedar shingles, an entire wall of glass, a 20-foot-high ceiling, and an additional ten feet in footprint. After drawing up the plans himself, Risom watched as a series of parts were trucked to Point Judith, Rhode Island, and then sent by "an ancient tug" to Block Island, about 13 miles from the mainland. Flatbed trucks picked up the pieces and drove up an arduous winding dirt road to the site. Remote but well placed, the plot has an elevated position, effectively sealed off from view. "You’d never know it was there," Risom says. The Risom plot, located on the northern portion of the island, is bordered by a low stone wall, an aesthetic element that appears throughout Block Island.

Block Island weather is notoriously capricious-fog can roll in at a moment’s notice. Due to this, the house took two months to build, rather than the three weeks the contractor originally specified. (At times the fog was so thick that the carpenters couldn’t see each other, even from two feet away.) By summer, the Risom clan was firmly ensconced.

It was an intentionally cozy space. At this time, only the Risoms’ youngest sons were living at home, as the elder daughters were already in homes of their own. Risom conceived the nearly 700-square-foot house to comprise two floors. On the first level, there are two bedrooms, a bathroom, and an open kitchen, living, and dining area. Above, a large loft held the boys’ quarters. As the years rolled by, the family happily spent every summer at the house, fishing, collecting stones on the beach, and walking the trails of the island. Though Jens couldn’t always get away, the rest of the family enjoyed the house from May to November, which they continue to do today. Iben Risom passed away in 1977, a much-beloved member of the Block Island community. Originally, glass doors opened to the deck, but after years of gusty winds, it was decided that a side entrance, protected by a sliding steel door, would be the preferred entrance.

After decades of wear and tear, maintenance is of course necessary. Last spring it was decided that the glass sheets of the north facade were dangerously shrinking back from the frame. John Spier, a Block Island contractor, was called in to oversee the job, an admittedly hair-raising endeavor. "Working with big glass is always scary," he admits. "But it was more nerve-racking taking the old glass out because it wasn’t safety glass," he says. "You work it out of the frame carefully, but if it shatters and breaks into big lethal shards-let’s just say we were happy to get all the old glass out without bleeding too much." 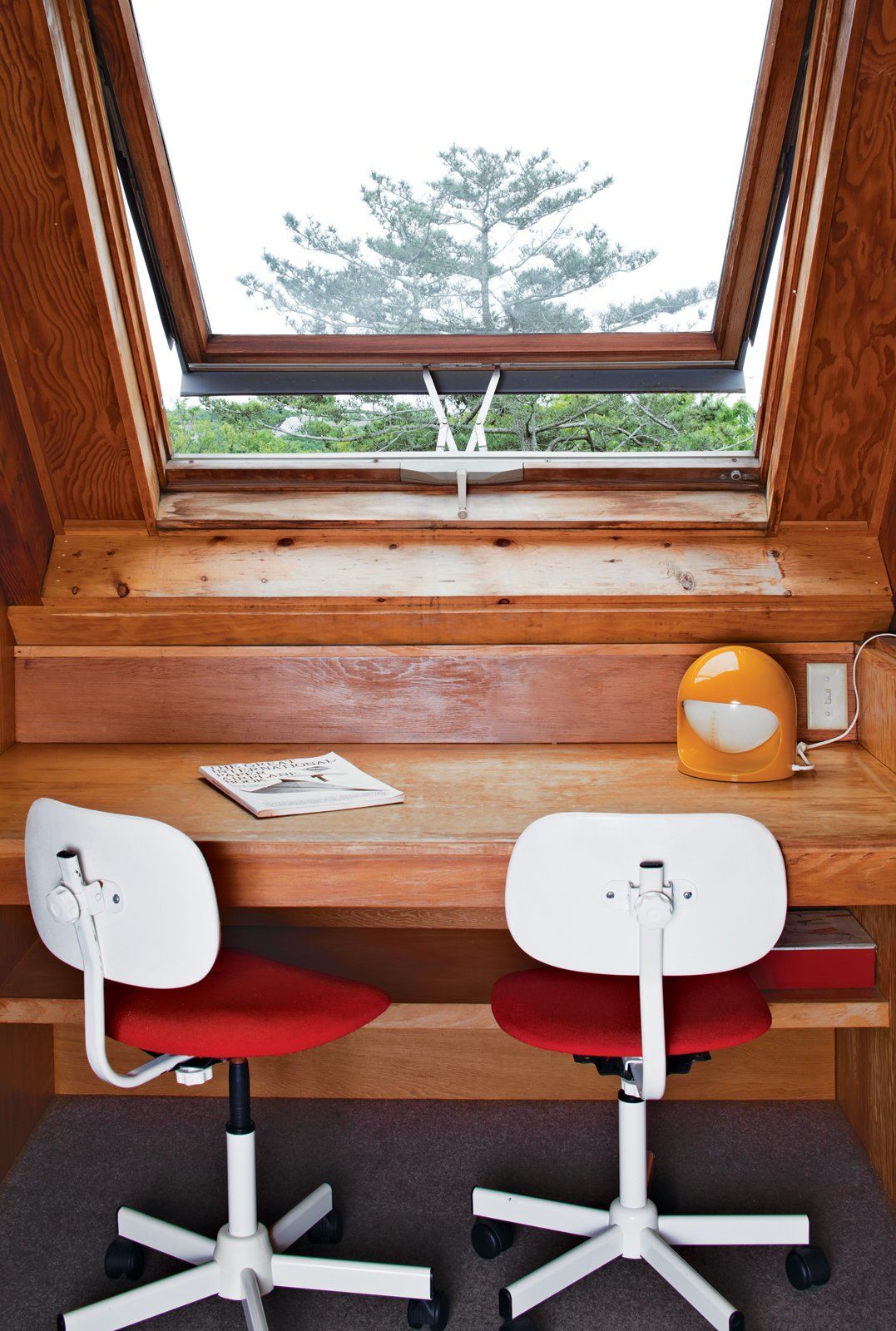 There is a small workstation on the upper level of the house.

Though Jens, 97, and his second wife, Henny, do not often make the trek to Block Island from New Canaan these days, they made a special trip to see the new glass in place and supervise the photo shoot that accompanies this article. "I was worried it was going to look too new," Risom admits. Knowing the exacting standards of his father, youngest son Sven Risom was concerned about how his father would view any change to the house. How did his father respond? "Well, you ask a designer about design and he’ll have an opinion, no matter what," Sven explains with a laugh. "But he’s proud and happy that the family is still enjoying the house, and improving it rather than letting it fall apart. I think his real joy was realizing that this house is a serious thing to us. That, to someone in their 90s, is more important than anything else." The sofa is a prototype that never went into production-the base slides out and the two cushions become flat for sleeping. Today, one can buy Risom furniture from a variety of sources, including Knoll, Design Within Reach, and Ralph Pucci.

Risom is content with the state of the house that he is leaving in the care of his family. Though he regrets that his own children didn’t have the same close relationship with their grandparents that he did, he is thankful that the carefree summers he enjoyed as a child are similar to those he has provided for his grandchildren. "In the country, life was very different," Risom recalls of his idyllic Danish childhood. "It was very primitive, it was very simple, but it was such a lovely time." 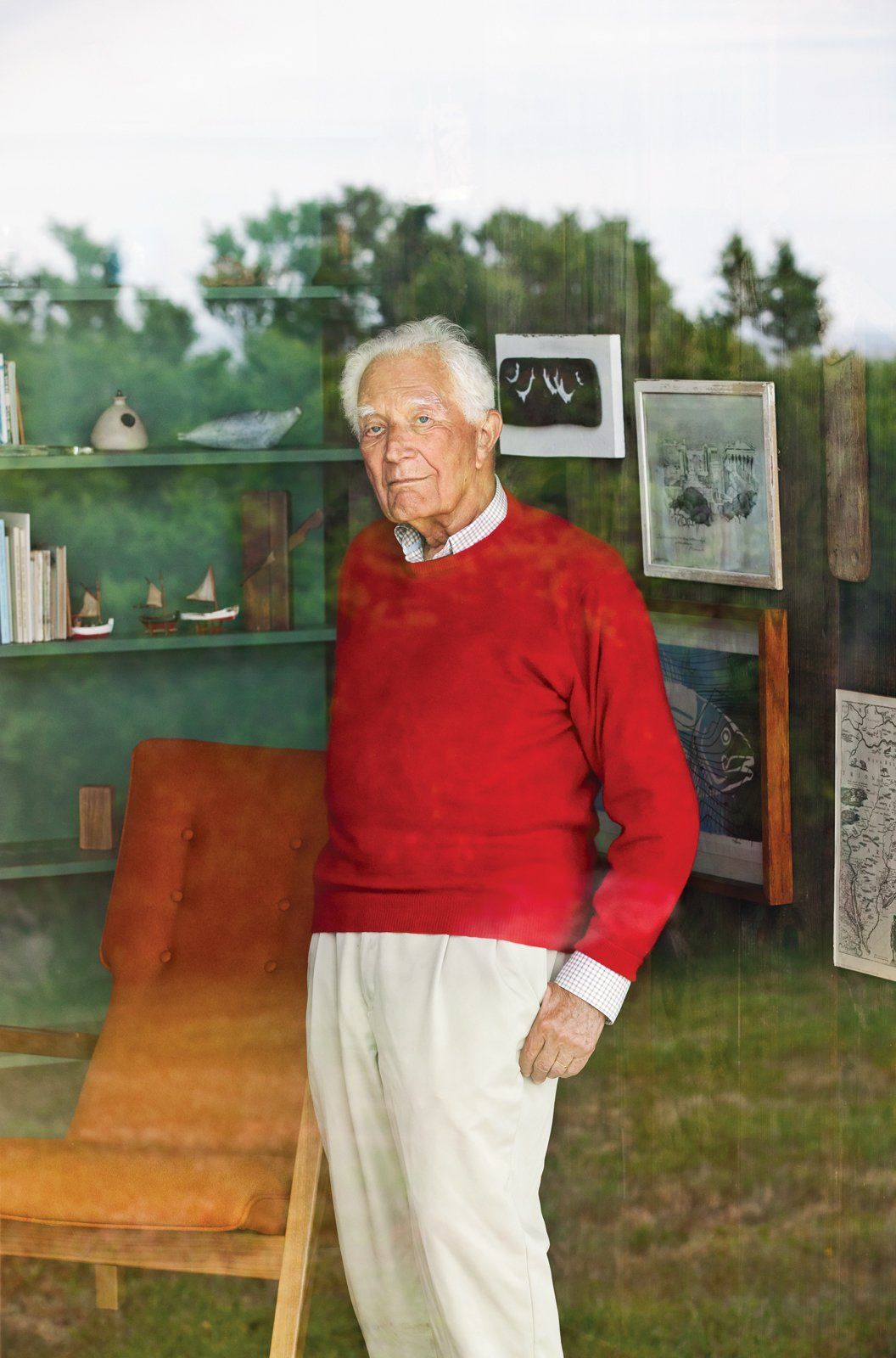 A portrait of the designer. "Architecture, to me, is the most beautiful of the arts. I always knew that I wanted to design, but only [if I could] create products over which I had total control." A low stone wall surrounds the perimeter, which Jens planted with trees in order to create a buffer between the house and the surrounding vista. On the north-facing facade, it’s easy to discern where the original glass doors used to open directly to the deck. In spring of 2012, Block Island contractor John Spier replaced the entire wall of glass panels. A bright-yellow "R" sign, from a truck that used to deliver furniture from Jens Risom Design, sets off the southern facade. When Jens designed the house, he stipulated that he wanted cedar shingles, not the asphalt ones that came with the original design from the catalog. An orange chair and cream ottoman of Risom's design.