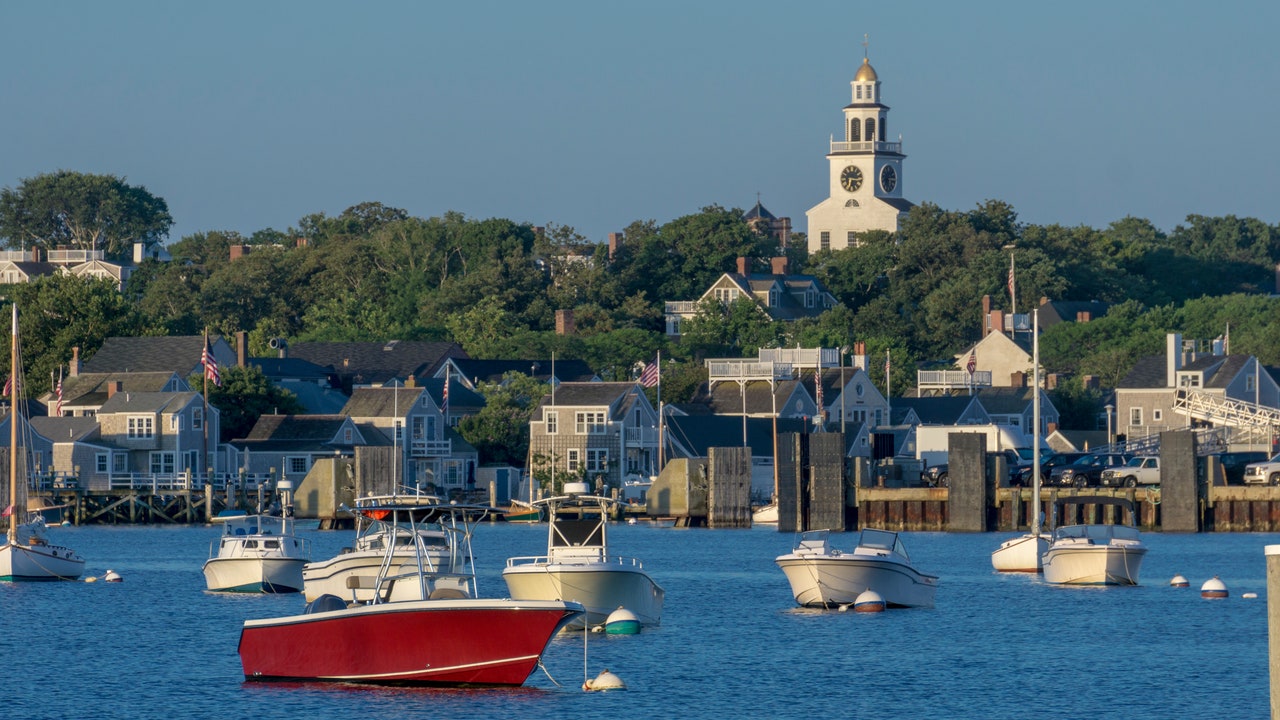 The well-worn charms of these summer destinations—Kennebunkport, Maine; Nantucket, Massachusetts; and Newport, Rhode Island—have been visited (and revisited) for centuries.

But these historic Northeast enclaves are, at once, similar and dissimilar: Each boasts a beloved character that’s exclusive to their shores. The aesthetic of Kennebunkport (with its white-painted wicker furniture) is different from the aesthetic of Newport (with its dark wood and stripes). Herewith, a closer look at the timeless design stories unique to each locale.

HISTORY: This enclave embraces the best of Maine—a fishermen’s (or lobstermen’s) town with pedigree. From 1755 to the mid-1800s, the commerce was centered around the construction of sea vessels. Those associated with this business (e.g., ship captains) decorated their homes with an assortment of treasures that were collected on their adventures. In the mid-1800s, the “new wealth” from the midwest (including the Walkers, the predecessors of President George H.W. Bush and President George W. Bush) discovered this destination. These summer residents came to favor shingle-style “cottages” with comfortable, well-worn furniture.

DECOR: The fabrics are chintz and the walls are decorated with a palette of sea-worn colors (e.g., a gray/green called “Kennebunkport green”). The furniture is from Northeast-based manufacturers (e.g., Heywood-Wakefield) and the pieces that are the most characteristic of Kennebunkport are white-painted and wicker. Kirsten Camp of the Kennebunkport Historical Society says, “People have really maintained that breezy, light feel—especially with that wicker furniture. That Laura Ashley look is still really popular. It’s about that very bright, very white, very ‘ocean’ feeling.” 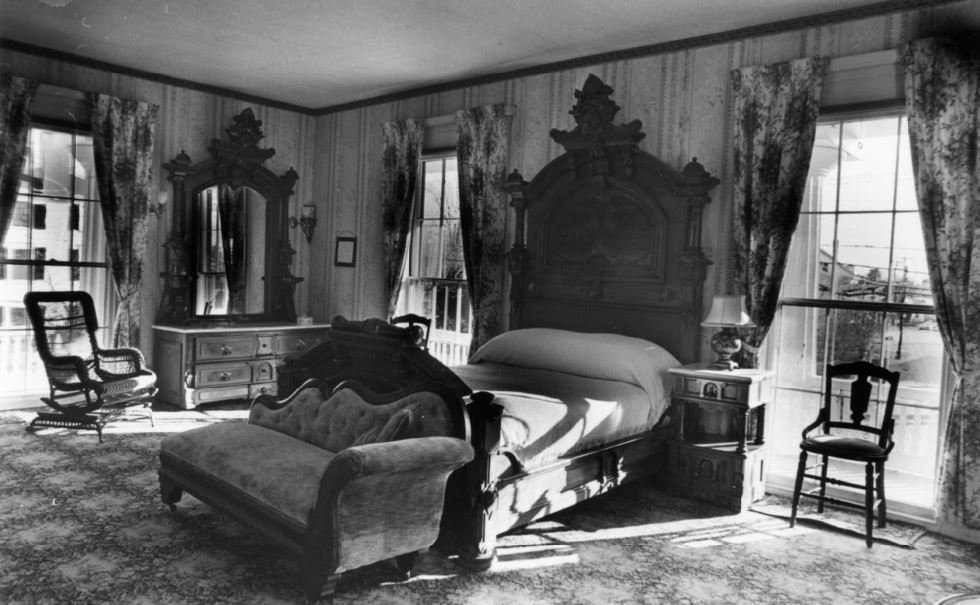 White Columns, constructed in 1853, is an ode to the Victorian Era in Kennebunkport: It features a collection of furniture that was sourced from around the world. In the master bedroom, the curtains and the walls are chintz and the wicker-style rocking chair is from Heywood-Wakefield. 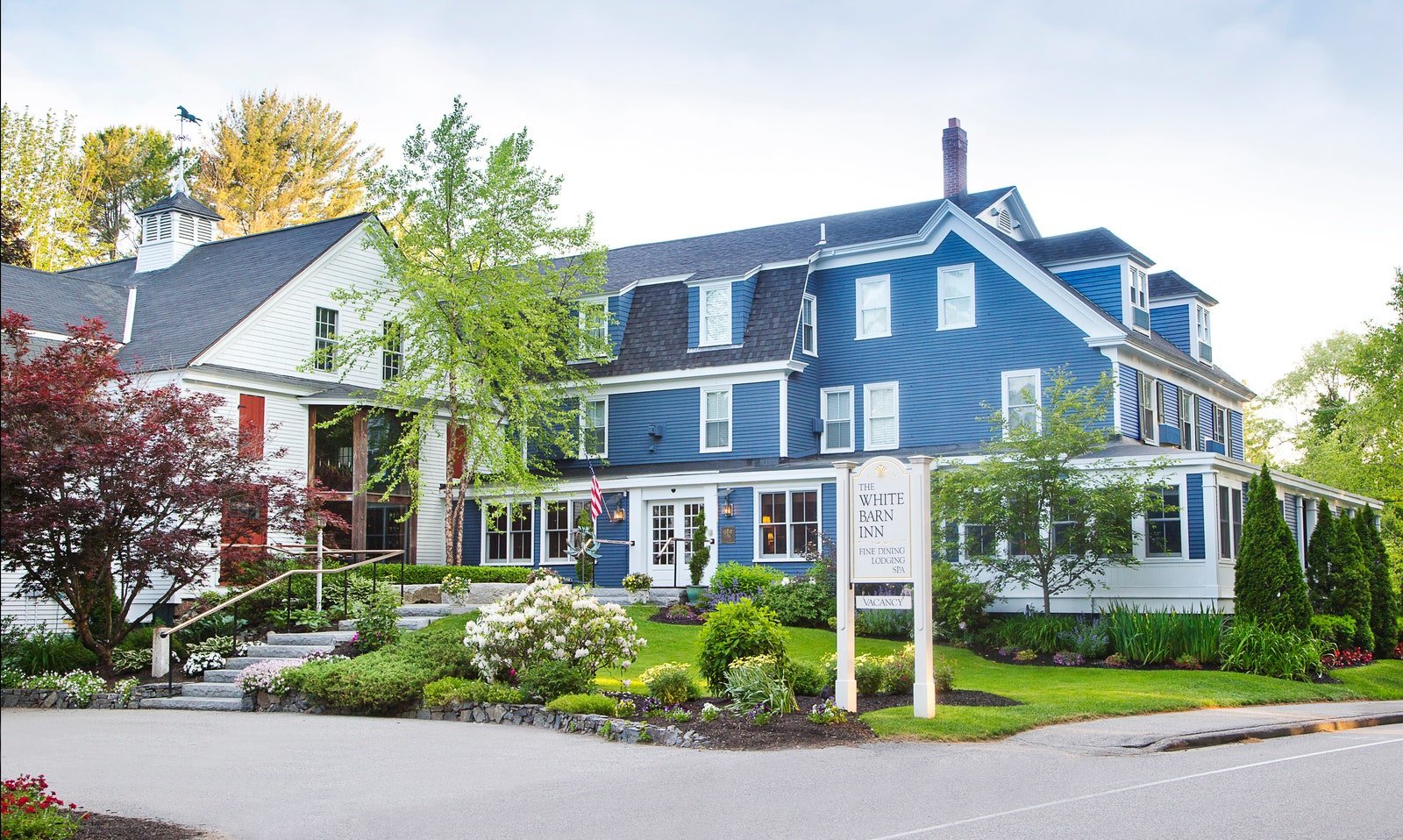 Rod Pleasants of McIver Morgan Interior Design and Architecture renovated this shingle-style inn (constructed in the 1800s): “When you drive through the town, that blue color is so prevalent and it works so beautifully with the water. We repainted the inn that Kennebunkport blue—and we left the barn white.” 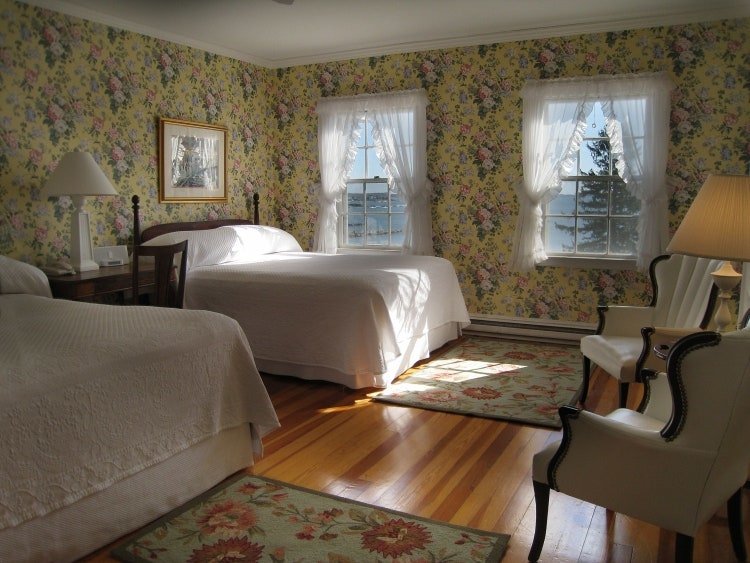 The Colony Hotel, the historic 1914 resort, has contributed to the aesthetic in Kennebunkport. The bedrooms are a version of “shabby chic” with chintzy decor and crisp, white accents.

HISTORY: This beloved island was embraced by whalers and their wives in 1715. It was around then that the tradition of Nantucket “lightship” baskets was introduced: Sailors would pass the hours on their boats by creating baskets, which were woven from rattan around a solid-wood base. “The Little Gray Lady of the Sea” welcomed its first inns in 1840 (with Herman Melville, author of Moby-Dick, being one of its first tourists in 1852). Nantucket would attract artists and other creatives to its shores in the 1900s—a bohemianism that continues to be at the heart of Nantucket’s aesthetic.

DECOR: The Nantucket “lightship” baskets are, perhaps, the most decorative when they are souvenirs. The island is also famous for its folk art (which can be discovered at the Nantucket Summer Antiques Show). The accents are brass and the wood is white-washed. But the aesthetic isn’t WASP—it’s bohemian WASP. And then, there are the hydrangeas. As Donna Elle, who designed the Anchorage House at the Wauwinet, describes, “Hydrangeas became synonymous with Nantucket about 20 or 30 years ago. They just thrive out here in the salt air. You have the complimentary colors of the verdant green and the periwinkle blue. They are a quintessential part of the island. They’re always revered in any composition.” 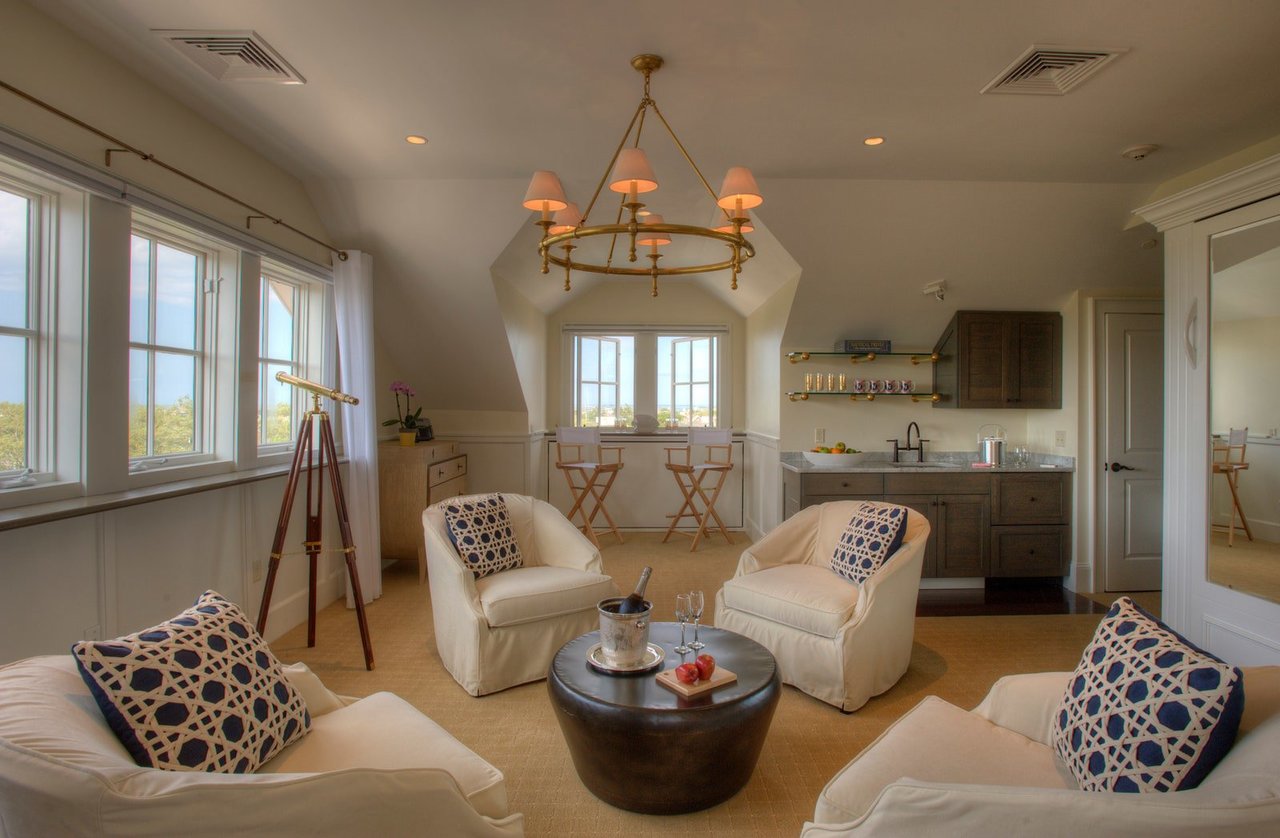 The Nantucket Hotel & Resort commissioned this Bruce Rosenbaum piece—a modern whale that moves with the press of a button—for its entrance. It acts as a nod to the island’s past that is, at once, current and historic. Donna Elle of Donna Elle Interior Design created the aesthetic for the Anchorage House at the Wauwinet: “I think of Nantucket as being in designer clothes with bare feet. There’s a vibe of very classic, upbeat, scaled-down taste. The artwork is evocative of the sea but is more updated than traditional portraits of ships.” Greydon House features a collection of ten “woolies”-which were embroidered by sailors in the 1800s. Kevin Withrow (who owns Greydon House) shares: “These were sourced from antique stores around Nantucket. There’s this three-dimensionality to them because there are layers upon layers of wool thread that raises off. It looks like they have every single piece of rigging, and when you look really closely at the sails, even the wind-markers are there.” The Nantucket Summer Antiques Show (August 10–13) boasts 30-plus dealers who specialize in art and antiques. There are two dealers from Nantucket—Paul Madden Antiques and Sylvia Antiques—who focus on items from the island, including Nantucket “lightship” baskets and scrimshaw.

HISTORY: The Atlantic Ocean has heartened the character of this Ocean State destination. In the 1700s, it was a center for import-export trade (which included first-class furniture from Townsend and Goddard). Then, in the 1900s, it became a second home for yacht owners and their yachts. These Gilded Age elites commissioned the most esteemed architects and decorators of the era to create enormous mansions on Bellevue Avenue. But the aesthetic has since evolved from a demonstration of affluence to one of understatedness, where the old—or, rather, the eclectic and the inherited—is prized above the new.

DECOR: The decor is an ode to Newport’s historic connection with the sea—from maritime-themed art to stripe patterns (evocative of yachts). Then, there are dark wood–paneled rooms (also, evocative of yachts). A combination of antiques from different countries and different periods is also characteristic of Newport—but not when it’s too precious. John Peixinho, who is on the board of trustees for the Preservation Society of Newport County, advises, “My first piece of advice before you buy anything: Train your eye. Buy books about houses. Buy books about interiors. Buy books about Newport and historic properties. Read them and study the photographs.” 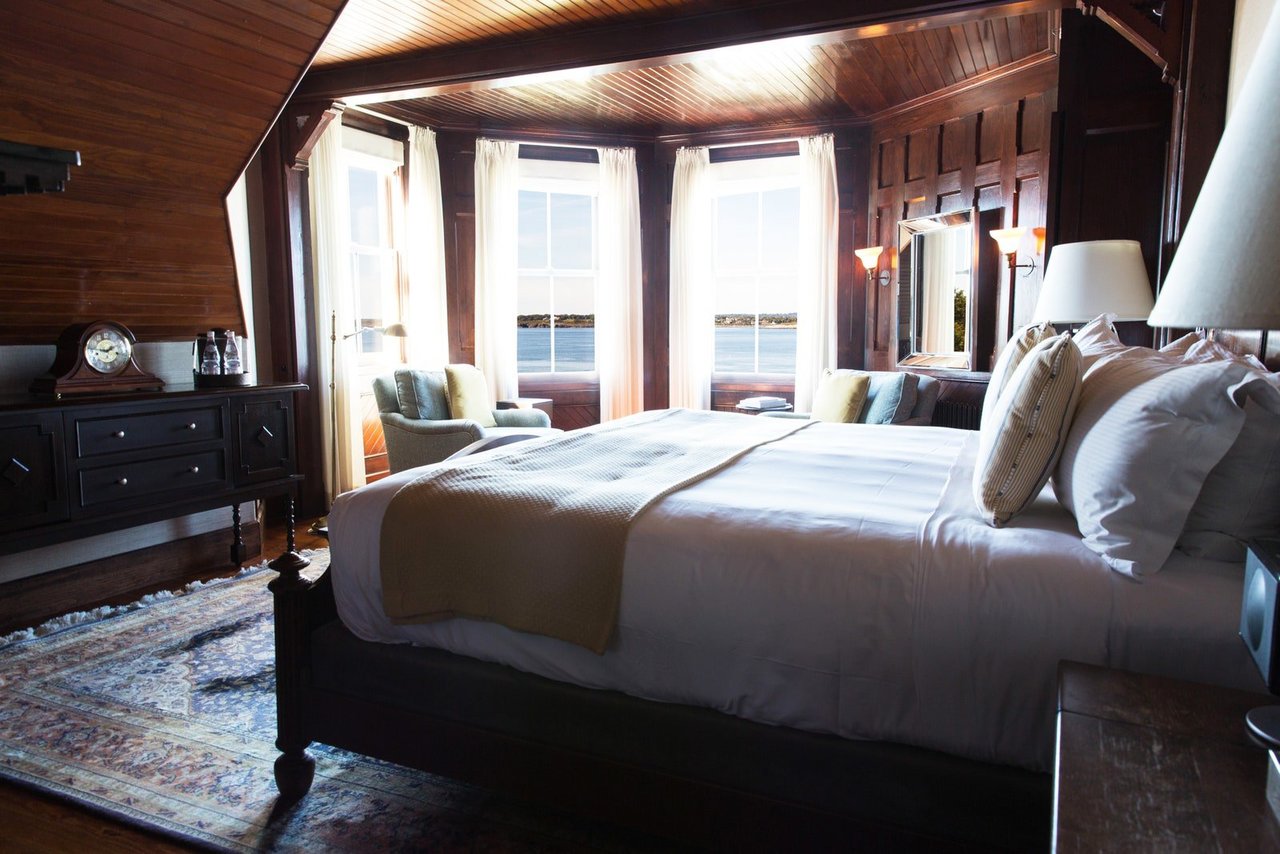 This Castle Hill Inn Turret Suite resembles the cabin of a boat and features panoramic views of the Atlantic Ocean. Brian Young (the managing director of Castle Hill Inn) shares, “Here, the focus is always oriented toward the sea.” 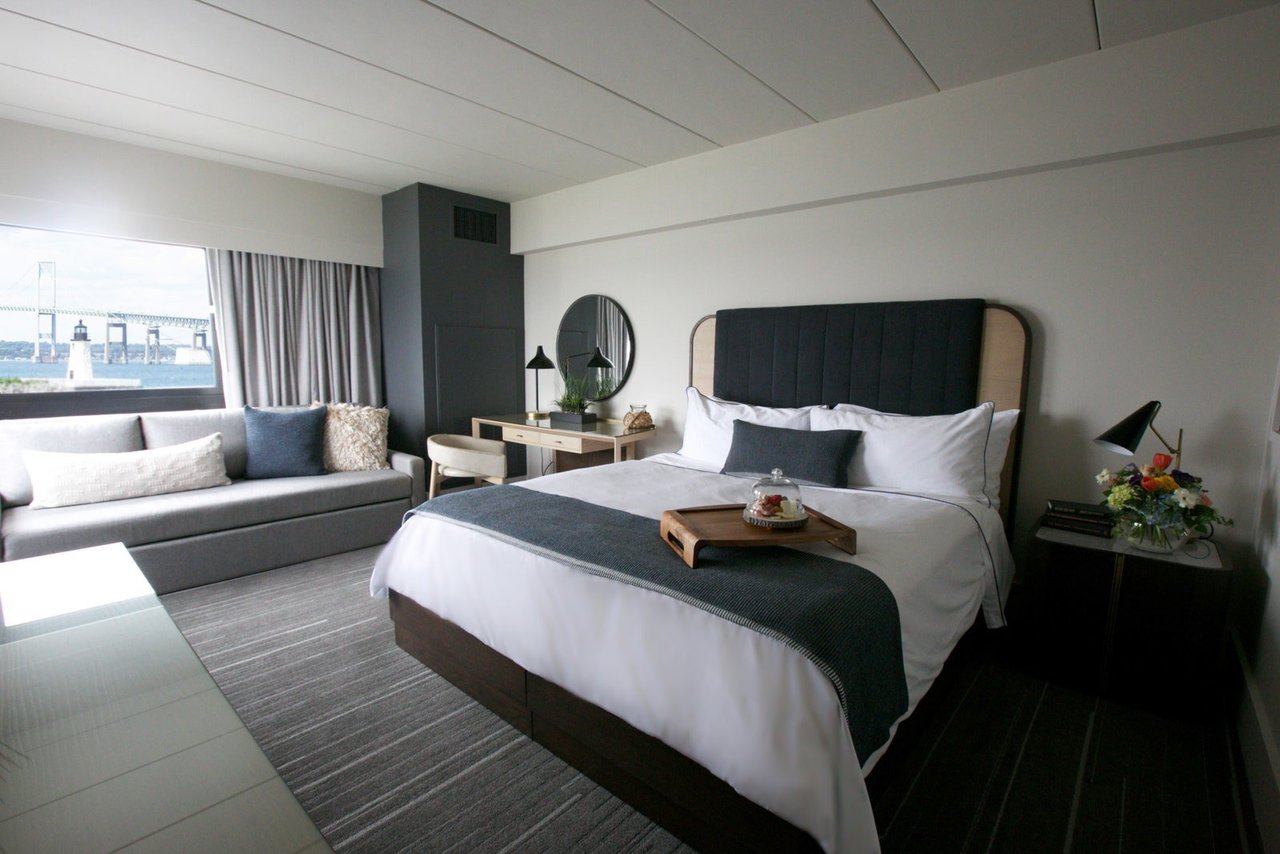 Gurney’s Newport (which debuted last summer) has achieved a gorgeous, more modern version of the Newport aesthetic. The resort has collaborated with the students at IYRS (the International Yacht Restoration School) to create yacht-inspired pieces that are artistic, including a Deadeye Pulley installation and a Sailing Knot installation. Peter Bowen shares, “They’re not going to jump out at you like a 20-foot yacht propeller or anything. It’s all very subtle.” 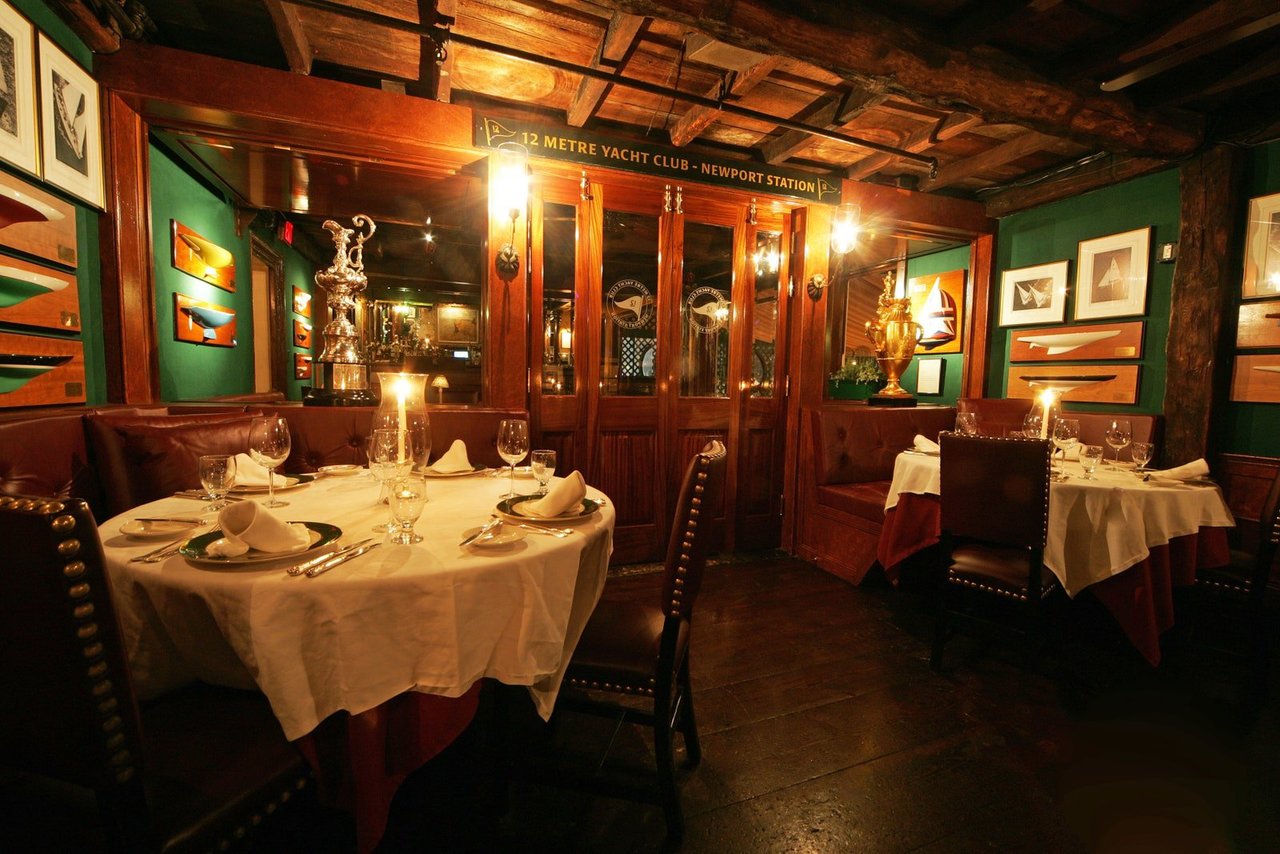 The Clarke Cooke House—a Newport institution for dinner and after-dinner entertainment—dates to 1780. The multilevel restaurant is decorated with nautical-themed flair, including awards from the America’s Cup.