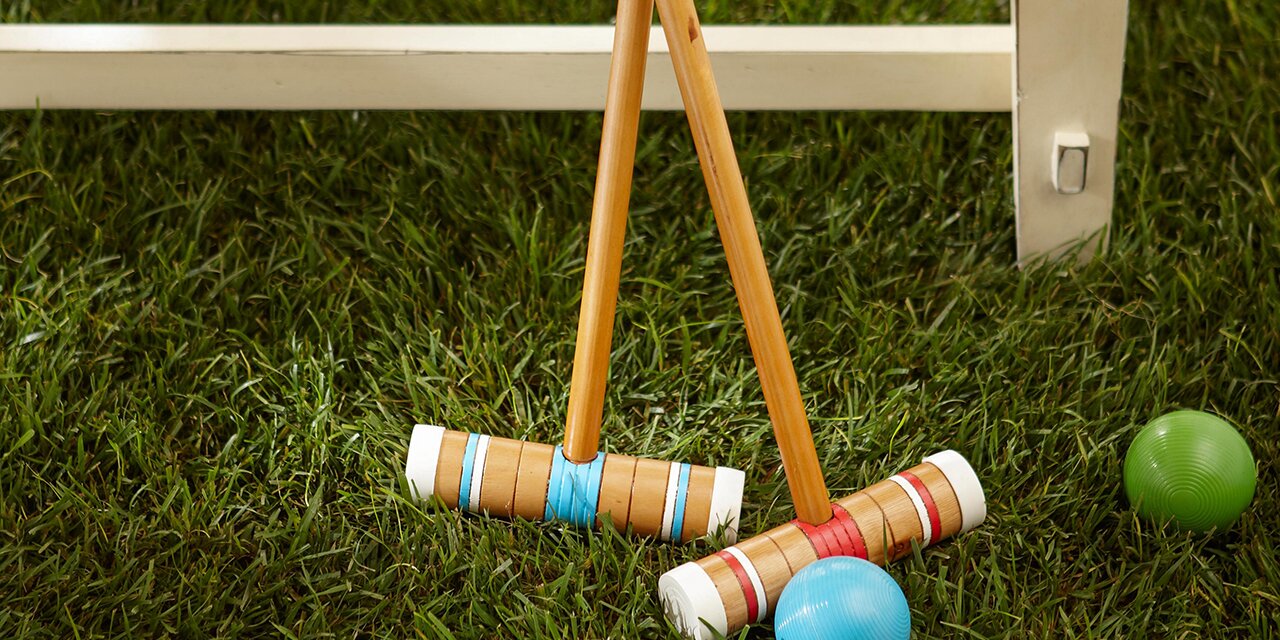 How to Set Up Backyard Croquet for a Great Outdoor Party

Croquet was once a game of white clothes and stringent rules. Now the whites are out, the rules are no-holds-barred, and croquet is making a backyard comeback.

Croquet is typically a friendly backyard competition-a diversion to be pulled out after the burgers have been grilled and before volleyball. But once one player's ball bumps into another's, it's time to whack those mallets.

Technically, the object of the game is to be the first player to work a heavy, orange-size ball through a course of nine wickets (curved hoops placed in the ground). But when one player's ball hits another's, the first player has two options: Take two "free" shots to advance farther through the course, or-and almost everyone chooses "or"-plant your ball against the opponent's ball and smash it into the neighbor's yard. There's no other game where the attack is quite so personal, so vicious, and so appealing.

It's a game played at a less serious level than, say, football, and people in a wide age range can take a swing at it. All you need is a lawn, at least two players, and a croquet set. With interest in the game increasing, it's easier than ever to find croquet sets in home centers, sports stores, and online. For a grown-up gathering, we like this six-person croquet set ($43, Target). And if you're coordinating a croquet game for little ones, this kids' lawn croquet set ($30, Target) is a must-have.

Only the pros-who play with six wickets and follow strict international rules-take the game extremely seriously. For others, the rules are mostly up to the players. Backyard players decide each game's level of seriousness or wackiness. So warm up the grill, invite over the neighbors for a backyard burger bash, and let the smashing begin. 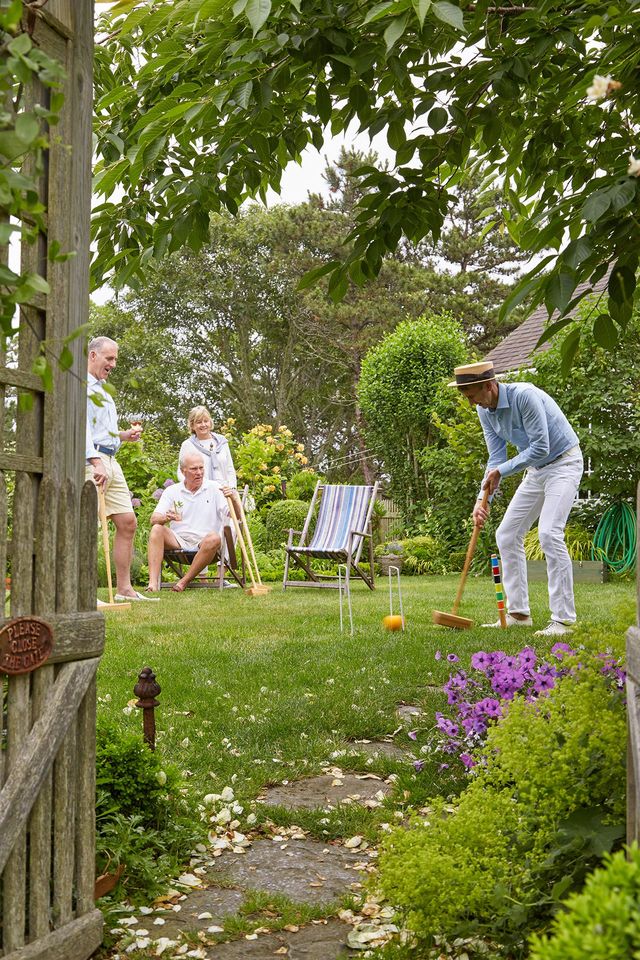 The History of Croquet

Croquet, originally a sheepherder's game, has been honored by kings, absolutely adored by 1920s literary sets, and scorned by Dennis the Menace. Here's a quick take on croquet through the ages.

Historians debate the origins of croquet. Some believe the forefather was a game played by peasants in 14th-century France with bent willow branches and hooked mallets that looked like shepherd's crooks. Others say croquet was originally a form of French outdoor billiards.

The sport was popularized by King James I in the 17th century, but it wasn't until the 19th century that a French doctor named the game croquet, French for "crooked stick."

A little English village called Wimbledon was home to croquet championships as early as 1870. Seven years later, the game was ousted for the tournament of another increasingly popular game-lawn tennis.

People originally condemned croquet because it was one of the first sports to allow men and women to compete together on an equal playing field. The sport was banned in Boston in 1890 for fear that young couples might disappear into the bushes to look for a missing croquet ball.

A band of lighthearted players invented the nine-wicket version in 1899 in hopes of revitalizing the game in the United States. When it was played in the 1904 Olympics in St. Louis, the Americans whacked their way to the gold medal because no one else knew how to play the game.

Starched white clothes follow the unbendable rules of the six-wicket international game. But the nine-wicket, backyard-and-barbecue version can be adapted to fit most any lawn or group of players. Feel free to change the boundaries and the placement of the wickets, or to use lawn flamingoes instead of mallets. Although you can play on almost any terrain, freshly mowed grass is the easiest. Here's a quick list of basic croquet rules for the backyard crowd. 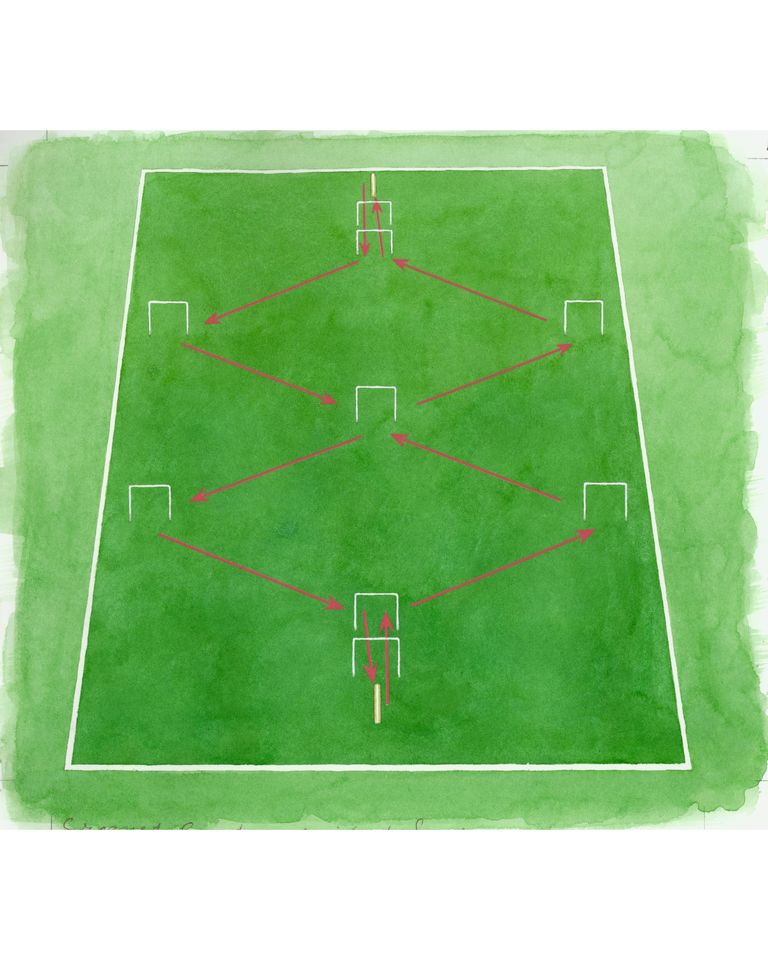 How to Play Croquet

Two or more people can play-individually or in teams. The person with the blue ball goes first, then red, black, yellow, green, and orange. This corresponds to the order of the colors on the stakes. It pays to start last because you have more opponents' balls to hit: You earn two additional strokes when your ball strikes another player's ball. Flip a coin to pick who goes first.

Place your ball a mallet's length from the first stake, behind wicket No. 1, and give the ball a whack. Players receive one stroke per turn. You earn an additional stroke by hitting your ball through a wicket or by striking the turning stake after wicket no. 7. 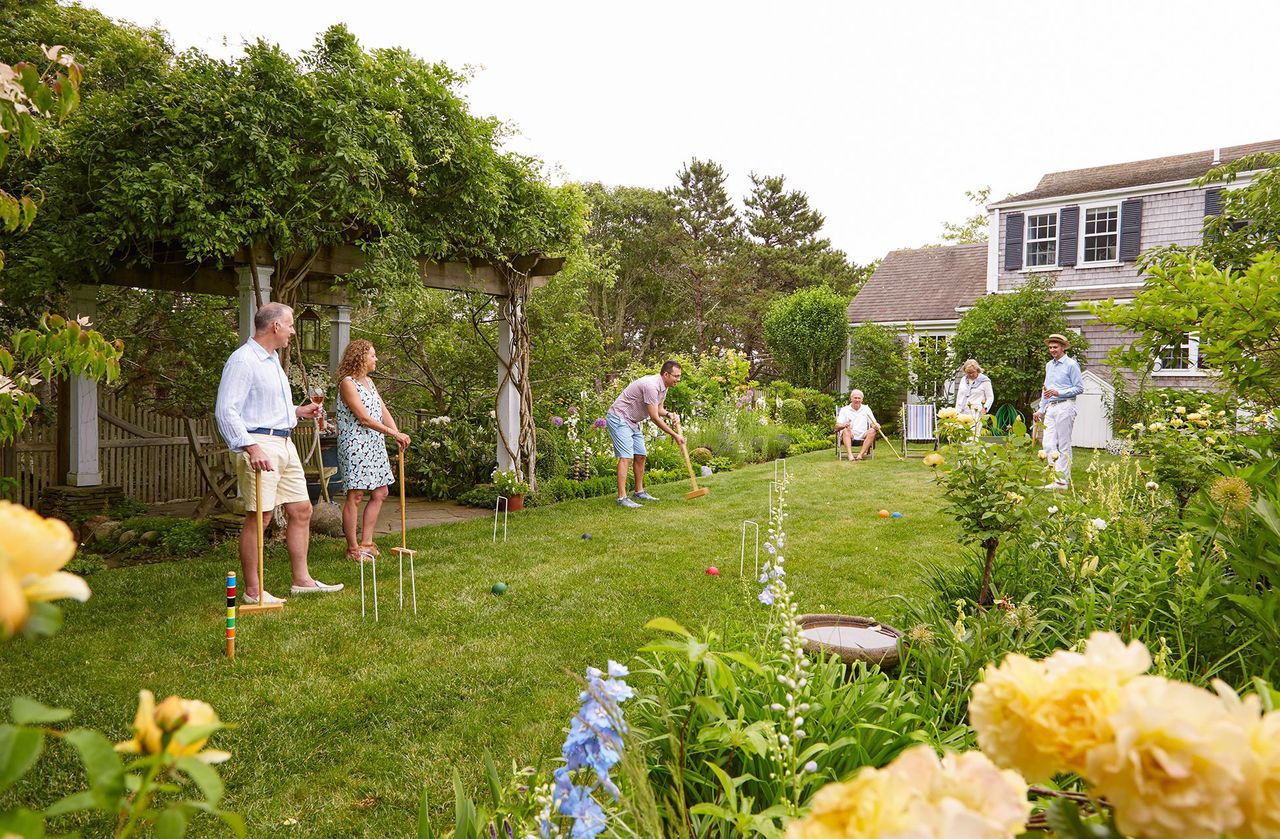 If you strike someone else's ball, you can use the two strokes you gain to continue advancing through the wickets, or you can croquet-this is where it gets fun.

To croquet, place your ball against the opponent's ball you hit, and hold your ball in place with your foot. Take your mallet and whack your ball hard so you smash your opponent's ball into kingdom come. Then, use your second stroke to continue through the series of wickets.

The first person to get his or her ball through all 14 wickets (you hit through five of the nine wickets twice) and strike the finishing stake is the winner. Do a victory dance. There are no stuffed-or starched-shirts in this crowd.