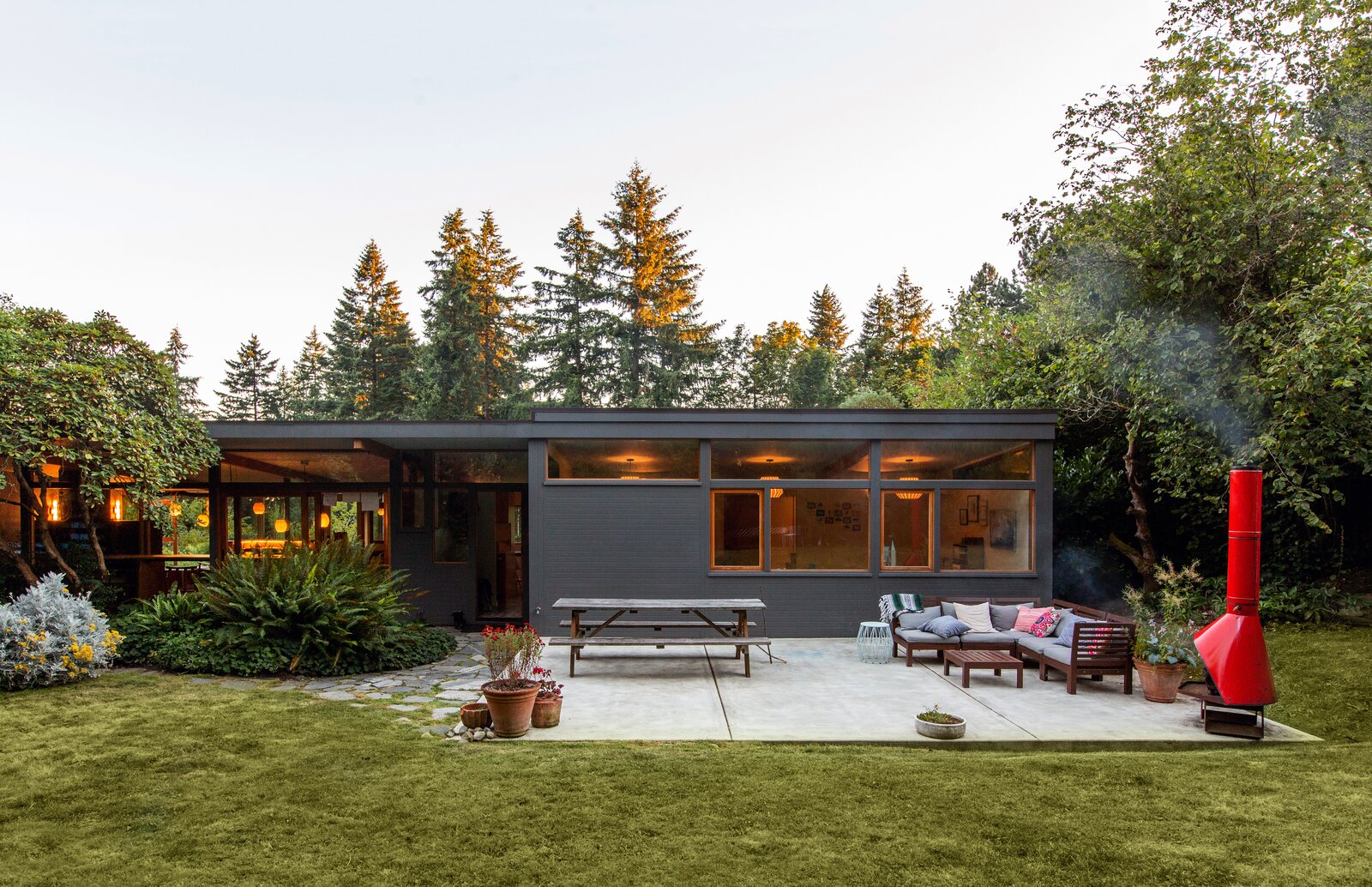 The Hilltop Community in Bellevue, Washington, has deep connections to the Pacific Northwest. Built near Seattle in the 1950s by a small group that included many local architects, the residential development was established to provide its residents with a sense of community and a strong relationship to the landscape. 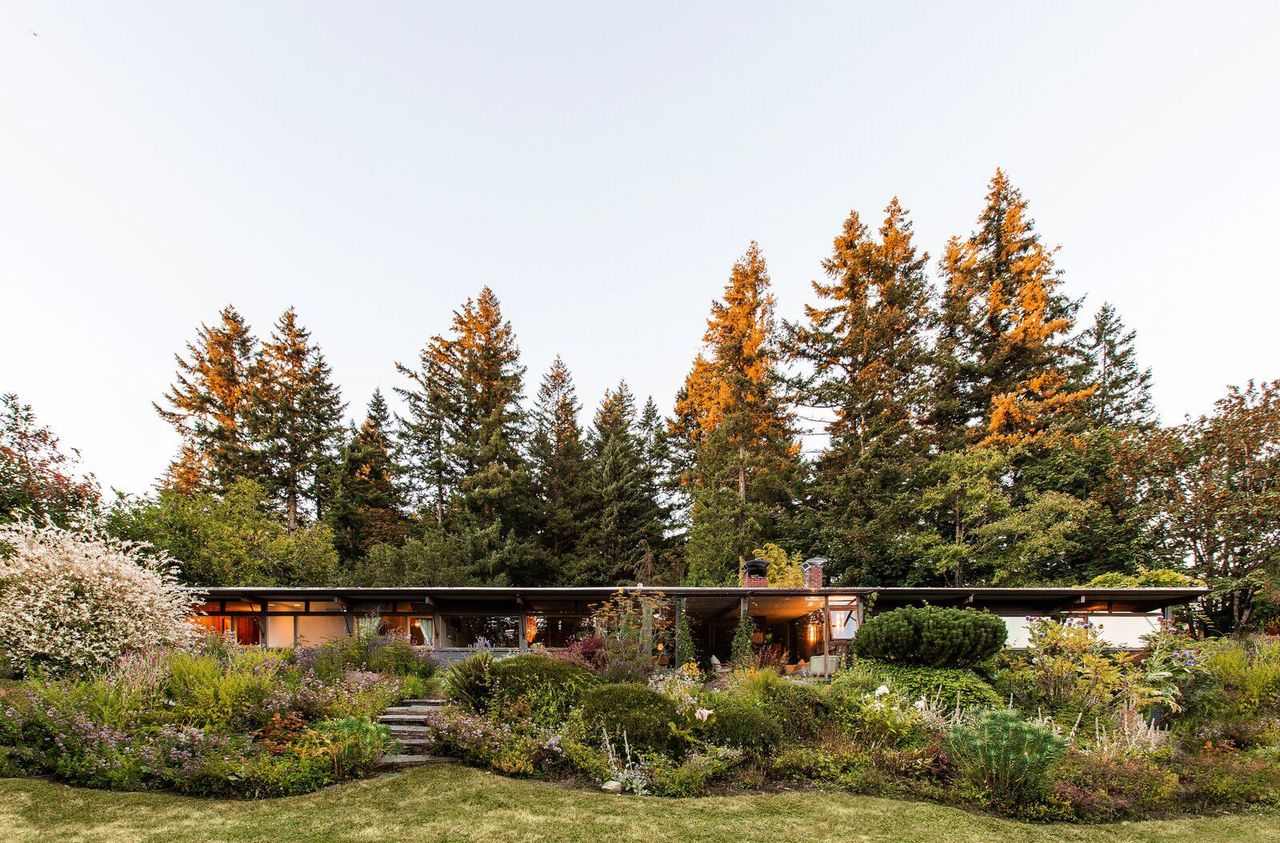 This carefully renovated 1950s home is located in the Hilltop Community, which features a collection of residences designed by Pacific Northwest architects including Wendell Lovett, Paul H. Kirk, and Fred Bassetti.

"There are approximately 40 houses that make up the community, all of them designed with a contemporary aesthetic and a thoughtful connection to site," explains architect Robert Hutchison, whose eponymous firm is based in Seattle. Among those homes is a 1954 residence by Pacific Northwest architect Wendell Lovett, who was born in Seattle and became known for his nature-oriented midcentury designs.

When Kasey LeClercq and her husband, Nick, first saw the Hilltop House, it was love at first sight. "We knew it was the place for us [from] the first time we set foot inside," declares Kasey. 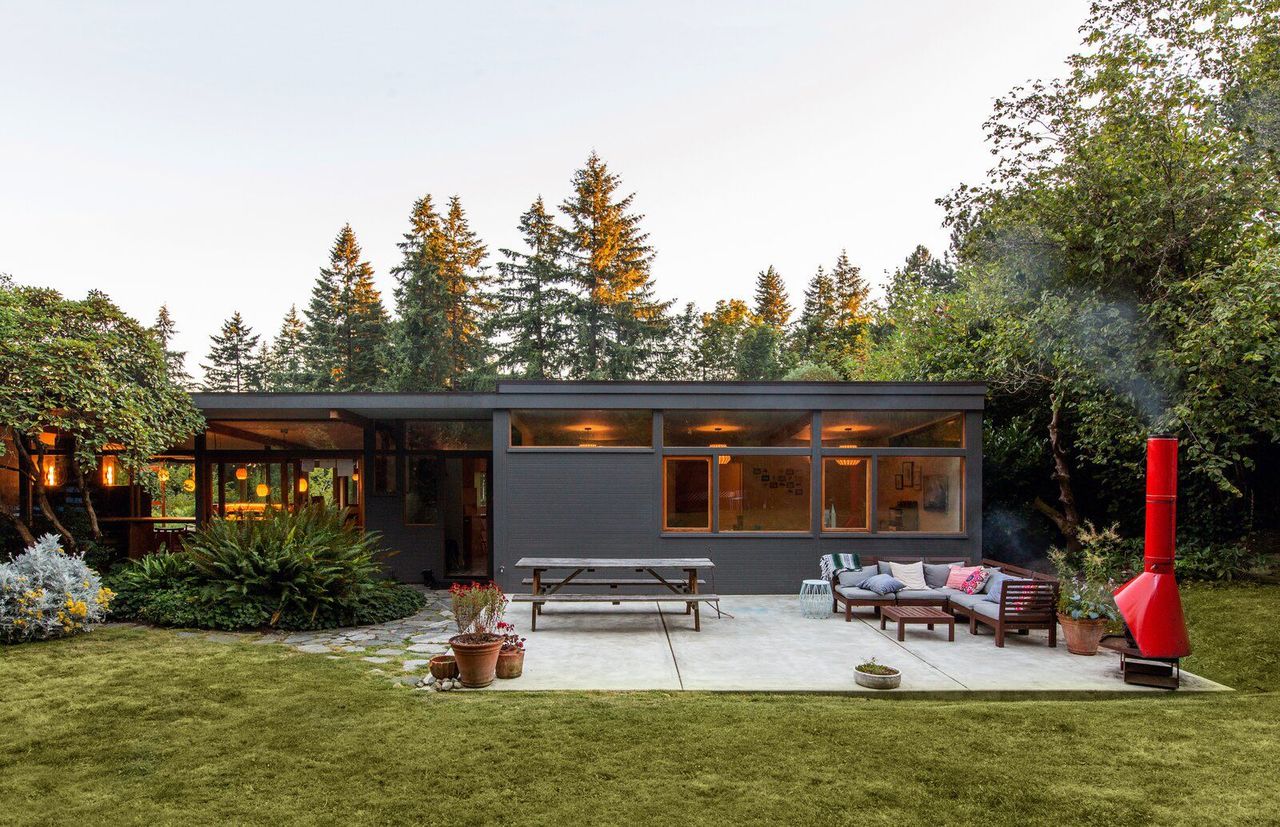 Seattle-based Robert Hutchison Architecture worked with the homeowners to design an addition to the residence that respects its original post-and-beam construction.

Kasey, a certified yoga instructor, and Nick, a builder and general contractor, loved how the home managed to feel cozy and open at the same time. The couple were also captivated by how the midcentury house incorporated-and respected-the verdant Pacific Northwest landscape. "We knew we wanted to be here for a long, long time," says Kasey. So, from the very beginning, it was extremely important to the homeowners to create a functional layout that could grow with their family. A pre-renovation peek at the west end of the Hilltop House, which was expanded by approximately 300 square feet to create more space for the owners’ young children. 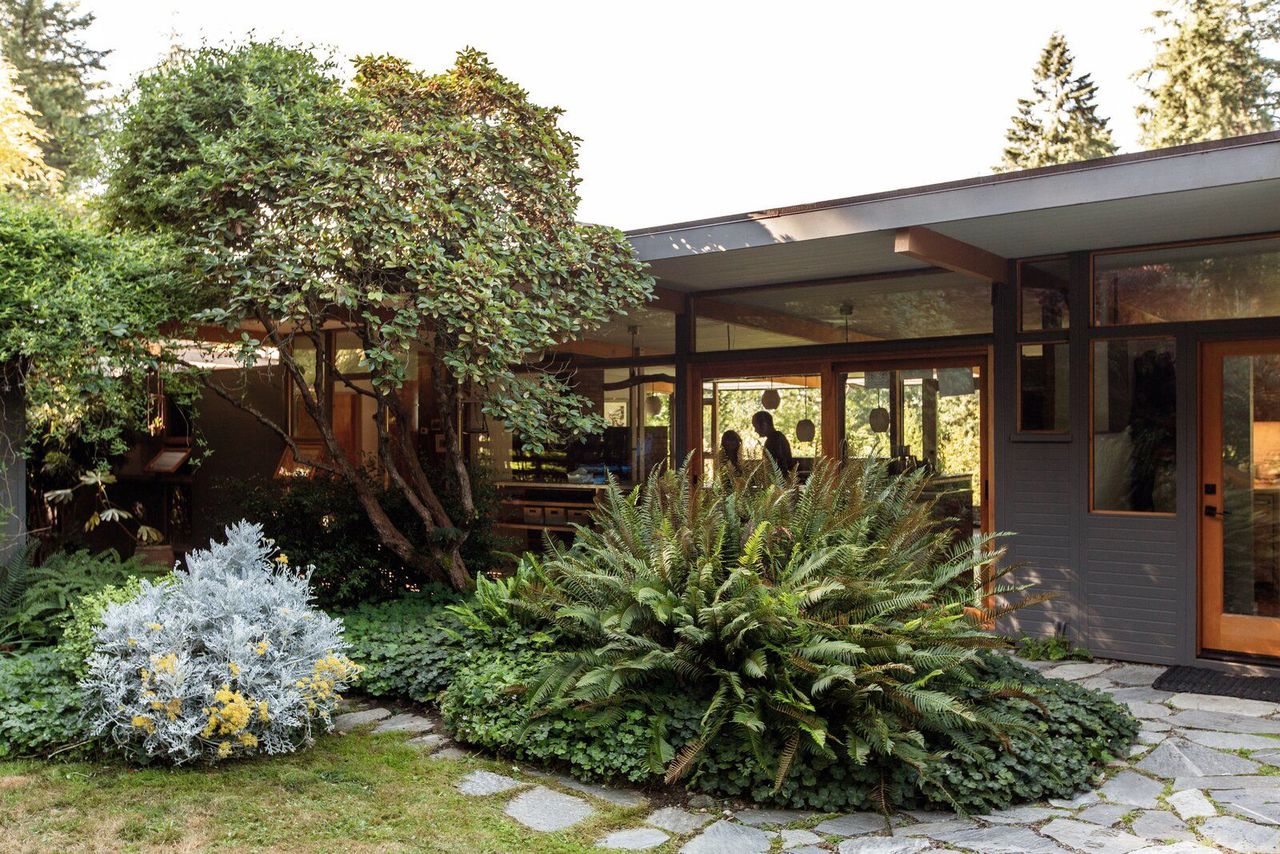 The original 1950s entryway garden, which welcomes residents and guests to the home, has remained unchanged over the years.

Prior to the 2019 renovation, the single-floor home featured three bedrooms and two bathrooms, as well as an open kitchen, dining, and living area. There was also a detached garage connected to the structure by a breezeway, in addition to a large, open room at the west end of the residence. While the original layout worked sufficiently for Kasey, Nick, their two young children, and their dog Buba, the couple eventually decided that the west wing felt underutilized and isolated from the rest of the house. 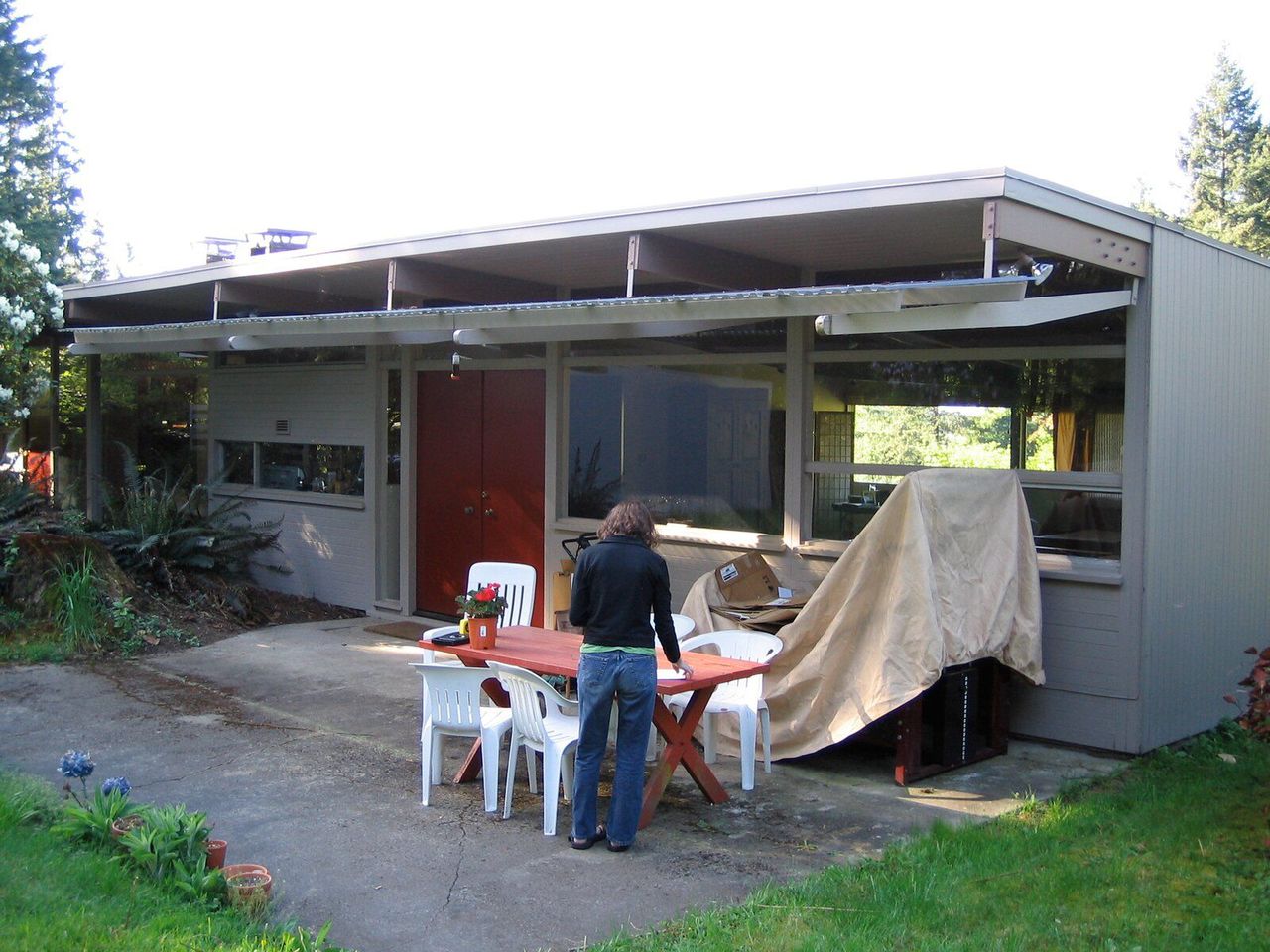 The 1954 Wendell Lovett home featured ample glass windows to create multiple sight lines from the interior spaces to the outdoors. 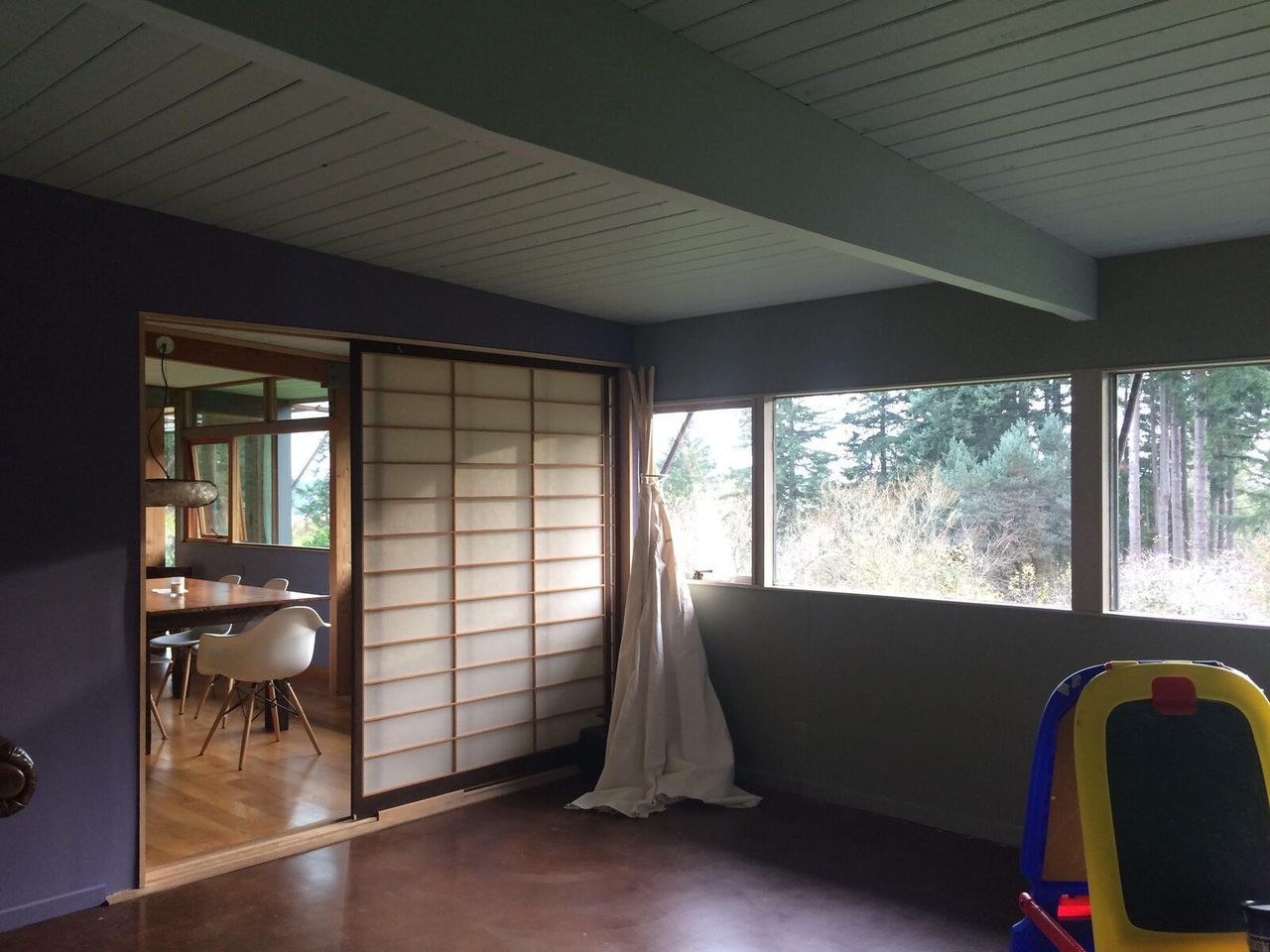 The original west wing of the residence could be separated from the dining area using Japanese shoji-style partitions. 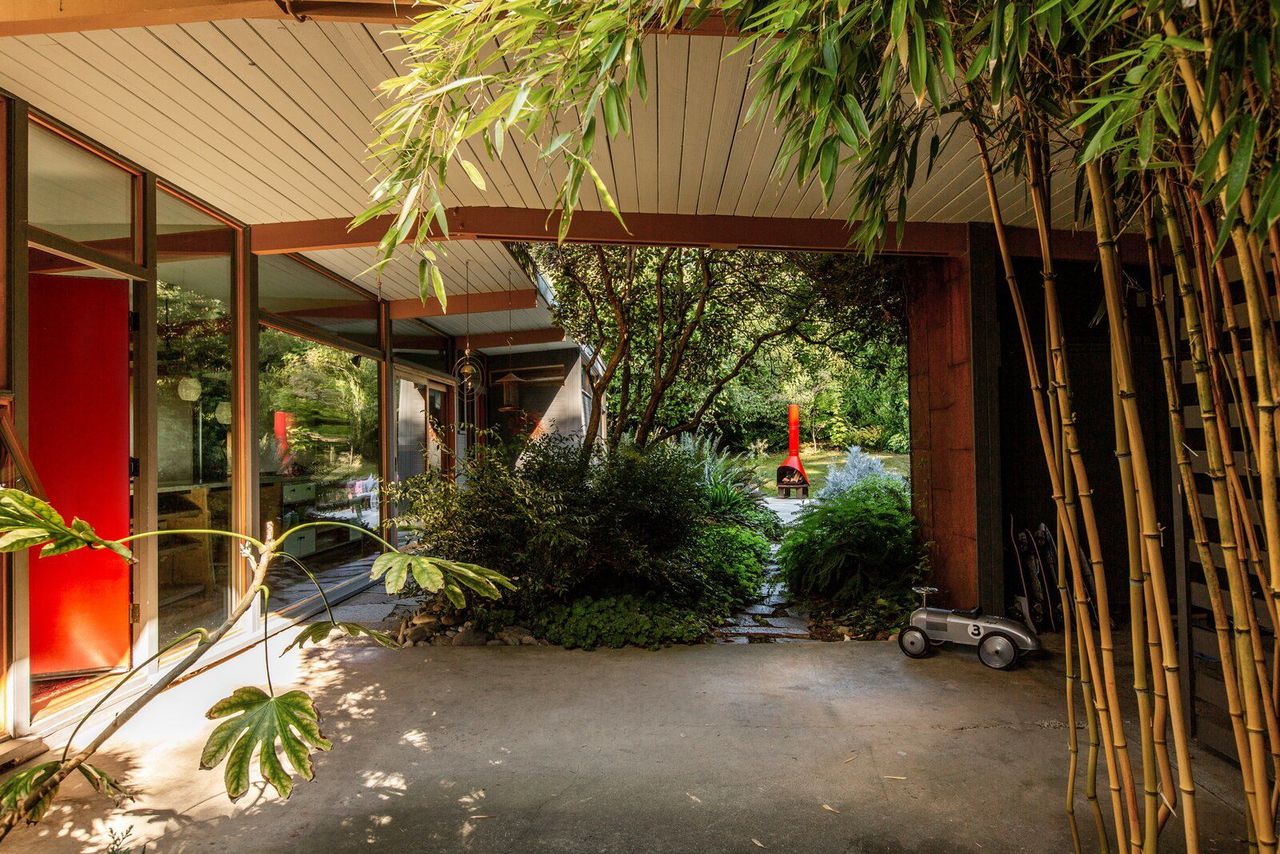 The 2,890-square-foot renovated home is nestled in the Hilltop Community near Seattle, which Kasey describes as "a secluded gem with sprawling greenery and spectacular views."

To rethink the layout of that area, Kasey and Nick called upon Hutchison, who quickly determined a way to retain many of the home’s original elements while also updating the floor plan to suit the family’s needs.

Kasey and Nick were adamant about honoring Lovett’s original design, which incorporated exposed beams, wood roof decking, and multiple glass windows to create long sight lines through the residence. "What was most important to us was to preserve and expand the structural rhythm of the house, which is based on an eight-foot structural bay," Hutchison says. "My favorite Lovett detail [is] the double-wood column adjoining the fireplace," says Hutchison. "It’s another simple, economical, and elegant detail that continues the theme of lightness throughout the house." The 2019 renovation of the Hilltop House maintained this feature. Kasey and Nick chose to keep the long, reclaimed-marble countertop in the kitchen, which had been renovated by the previous owners of the 1954 Wendell Lovett home. 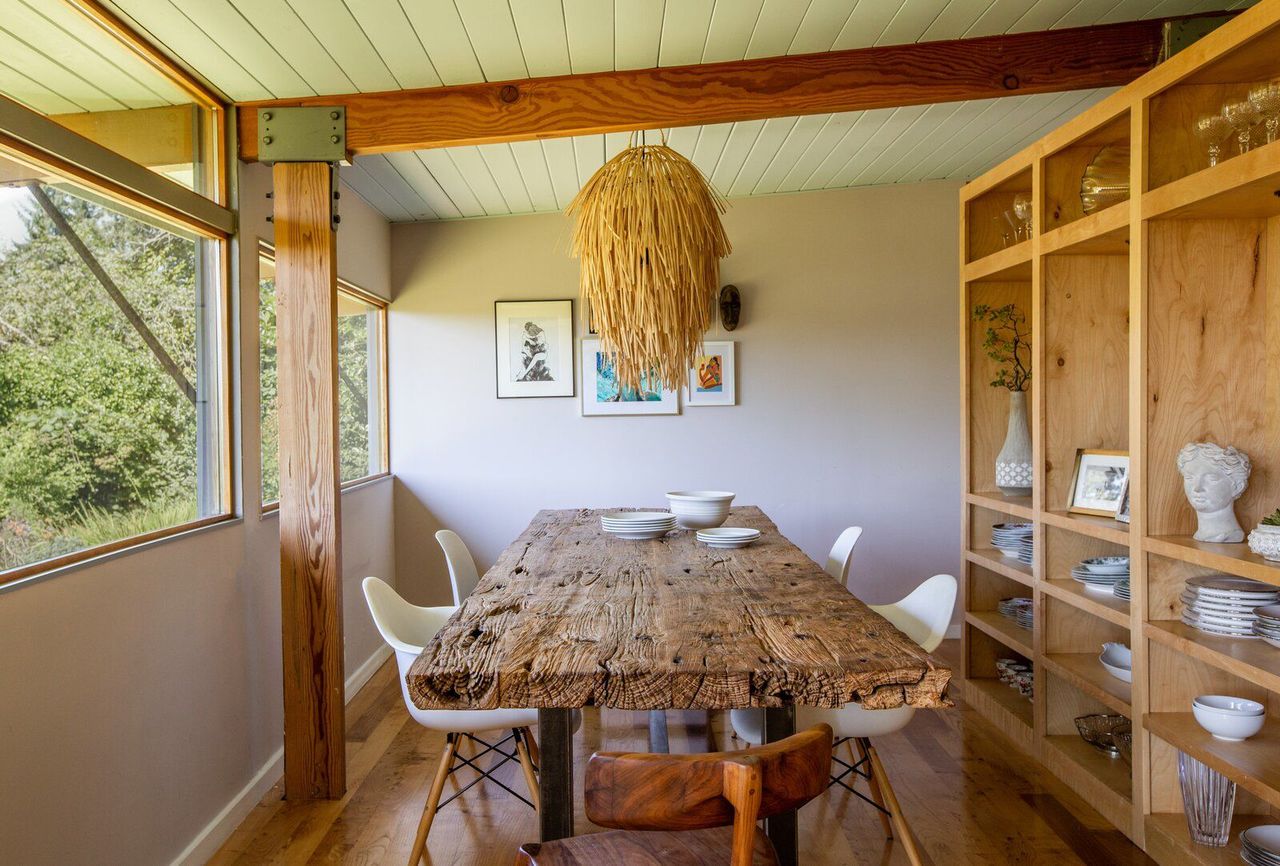 The interior spaces feature exposed wood beams, which were typical in Lovett’s homes.

With that in mind, Hutchison started making subtle adjustments throughout the home. The west end "became the obvious place to meet Nick and Kasey’s request for a new kids’ wing," notes the architect. The area offers privacy and separation from the primary bedroom but is still connected to the kitchen and living spaces at the core of the home. It also allows access to the yard, which serves as an extended play area.

Robert Hutchison Architecture expanded the original west end of the Hilltop House by about 300 square feet to accommodate a two-bedroom, one-bathroom suite for the children with a playroom that opens out onto a front deck. The east end of the house-which originally contained all three bedrooms-now holds a reconfigured primary bedroom and bathroom, as well as an additional bed and bath. 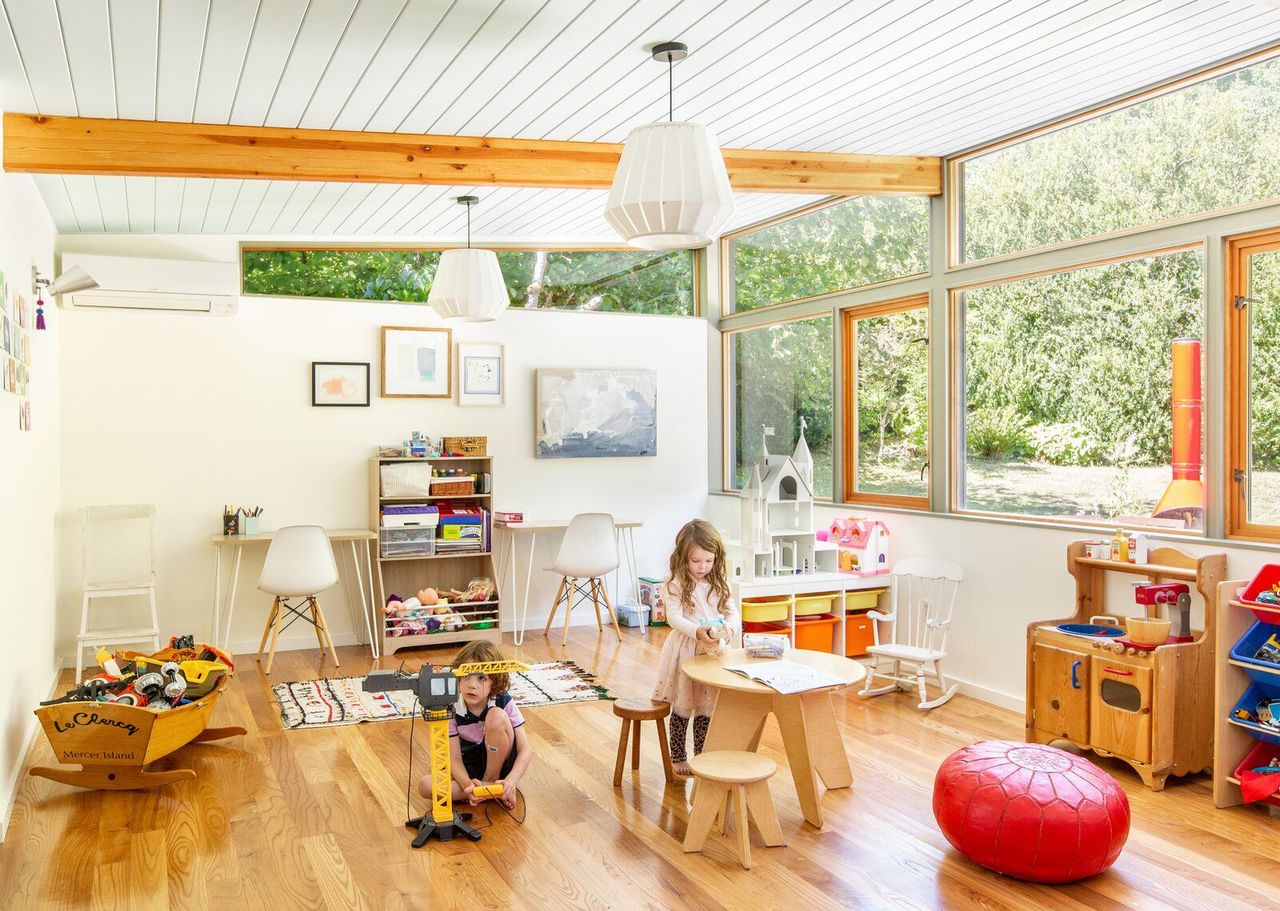 The expanded west end followed the existing layout and incorporated similar wood windows found elsewhere in the home. The children’s bedrooms now have direct access to the light-filled playroom, which opens to the front yard. "Kasey and Nick brought their own voice through some of the specific interior finishes, such as the flooring in the mudroom and the wonderful wallpaper in the kids’ bathroom," explains Hutchison. Wood paneling, floors, and other accents like the bathroom vanity continue the use of natural materials throughout the home.

"Architecturally and structurally, we tried to replicate the original materials," explains Hutchison. The subtle renovation incorporated elements such as wood windows and floors, painted drywall, and exposed roof rafters and decking. Hutchison was even able to extend the original roofline to the new kids’ wing, despite some challenges presented by requirements for thicker insulation in the current building code. (Hutchinson’s solution was to step up the roof thickness where the extra insulation was needed and keep the roof thin at the outdoor overhangs.) 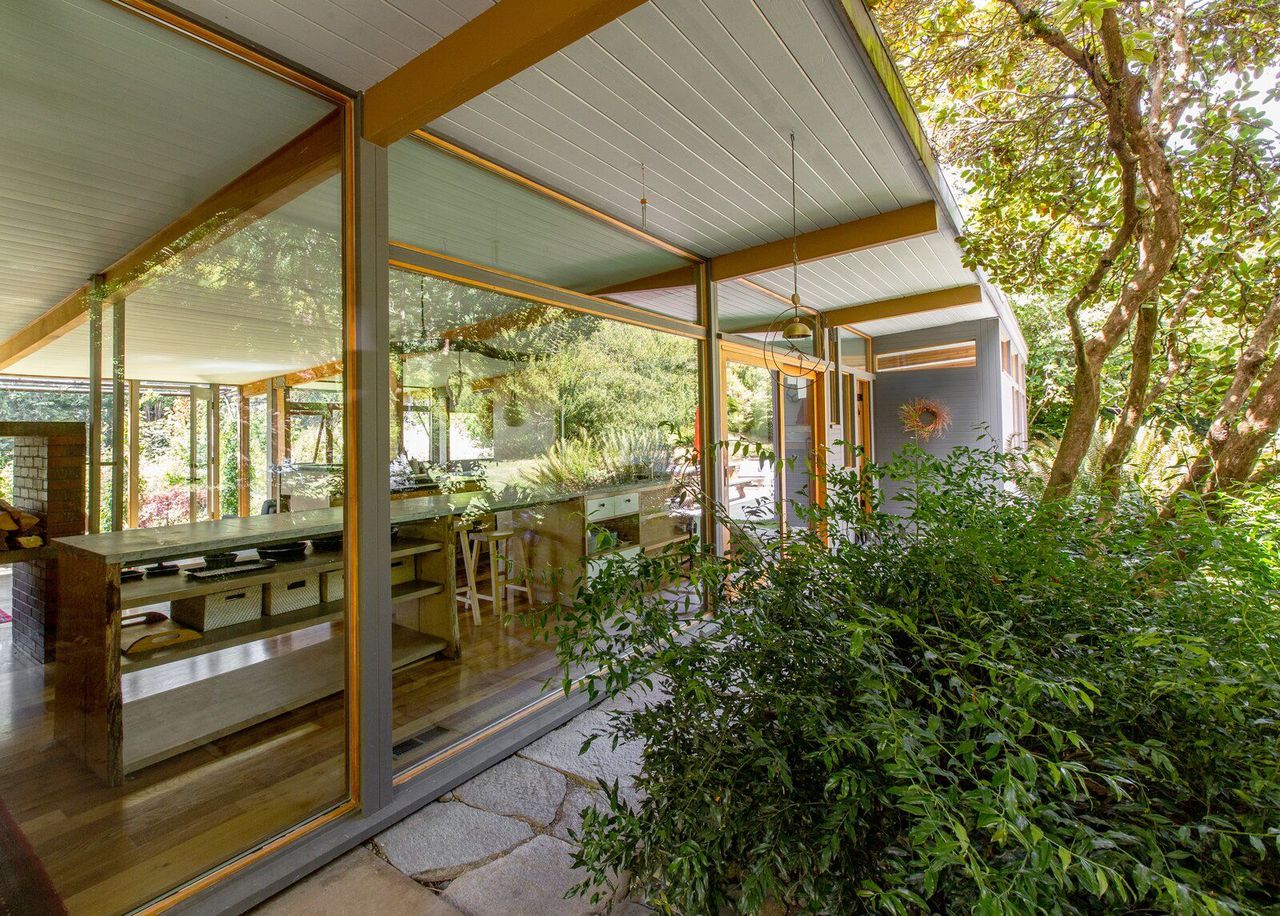 The homeowners wanted to maintain "the midcentury principle of thoughtful design that brings the outside in," Kasey says. The couple worked with the architect to create a home "where everything has a use and isn’t more than you need," she continues.

Other structural updates to the Hilltop House include new cabinetry in the kitchen and a defined mudroom entry from the backyard. All in all, Kasey and Nick got exactly what they were looking for: A functional remodel that still feels loyal to the original 1950s home. "Even from the outside, every part of the remodel was in honor of the design that [Wendell Lovett] created," says Kasey. "The hope is that you wouldn’t be able to tell that there’s a contemporary addition." The 2019 renovation was executed with a deep respect for Lovett’s design. "We really did not want to change the aesthetic of the home," says Kasey. "We simply wanted it to accommodate us a little better." 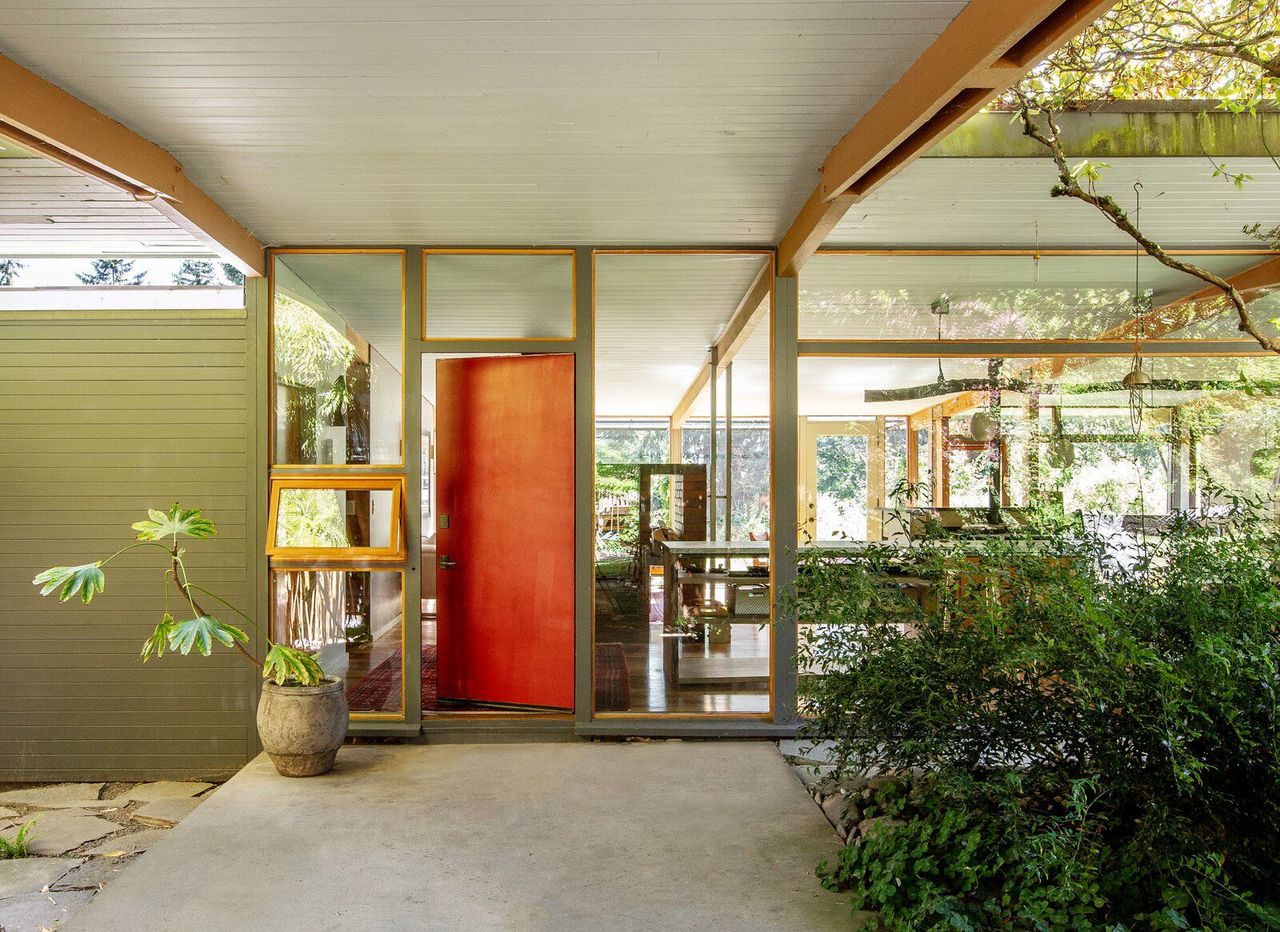 As you approach the Hilltop House from the covered breezeway that adjoins the garage, it is possible to see through the carefully placed windows to the greenery on the home’s other side.