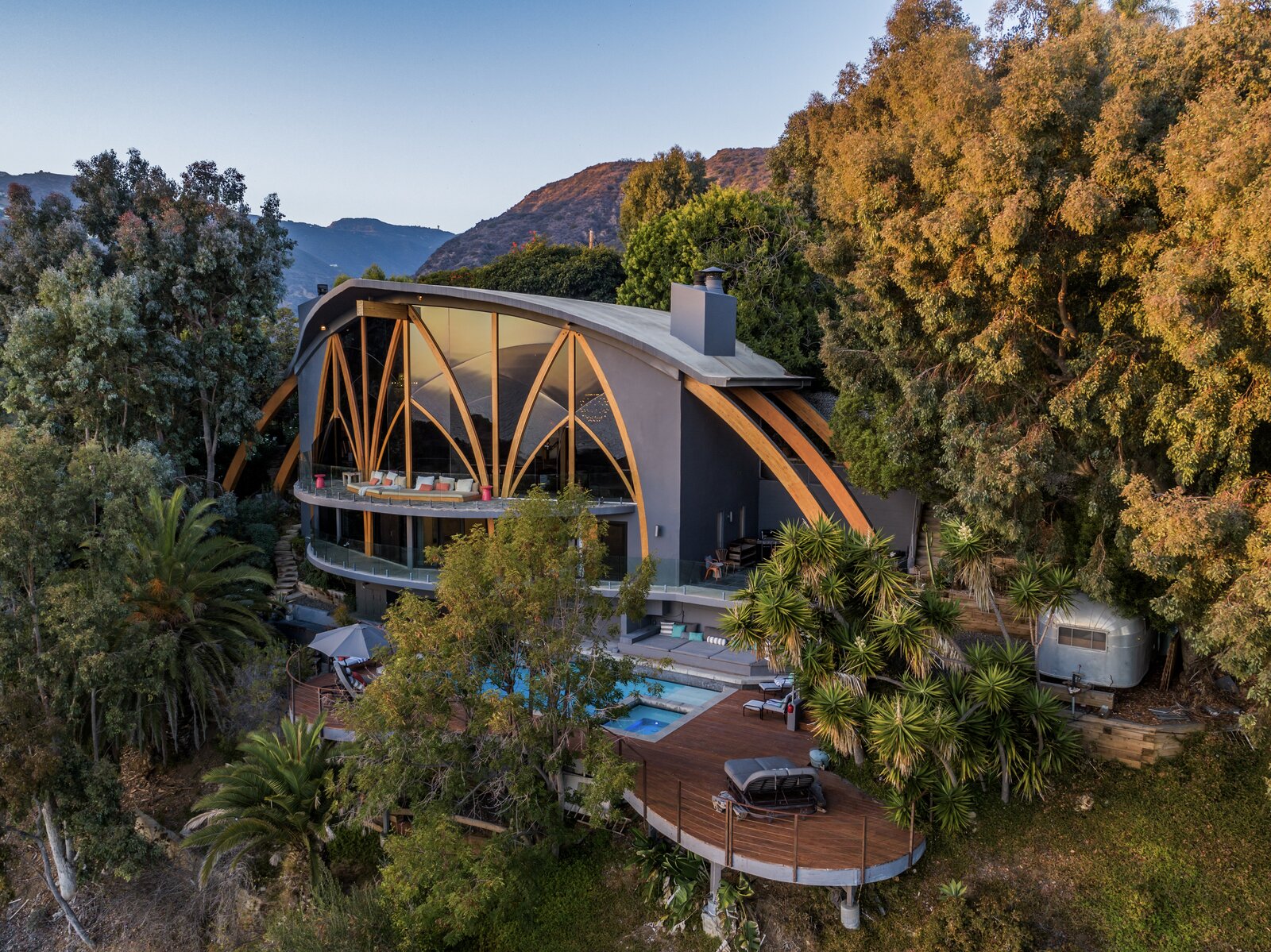 Harry Gesner’s Ravenseye House Swoops Onto the Market in Malibu for $9.5M

The futuristic pad was designed by the larger-than-life architect in 1997, and it even comes with a vintage Airstream trailer.

The Ravenseye House is once again up for grabs in Malibu, California. Nestled on a quiet hillside overlooking Las Flores Beach, the grandiose structure was designed by influential architect Harry Gesner for American playwright Jerome Lawrence.

Dubbed Ravenseye, the cinematic home was designed by California native Harry Gesner in 1997. The World War II veteran and self-taught architect-who is well known for the curvy, coastal Wave House, also in Malibu-crafted the structure for American playwright Jerome Lawrence.

According to the Los Angeles Times, Gesner-who is now 95 and commonly referred to as the Modern Maverick of Malibu-was tapped to create the modernist abode shortly after Lawrence lost his home in the 1993 Old Topanga fire. As a result, he designed the home with steel-wire panels, sprayed with concrete, to help it withstand future natural disasters.

Nestled among the one-acre lot’s lush vegetation, the main entry features an arched, wooden doorway that echoes the dramatic curves found throughout the interior. 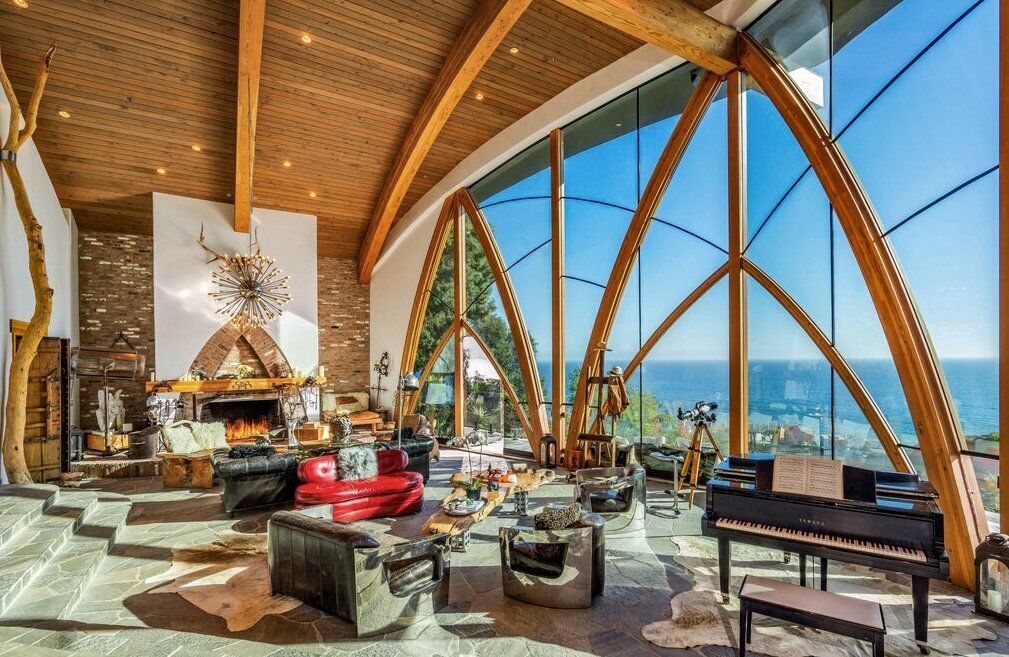 The home is largely defined by its central living room, which might have been inspired by Lloyd Wright’s Wayfarers Chapel, located in Rancho Palos Verdes, California. Gesner, a onetime apprentice of Lloyd Wright, designed the space to frame sweeping views of the Pacific. The expansive wall of glass is capped with nearly 30-foot-tall vaulted ceilings. 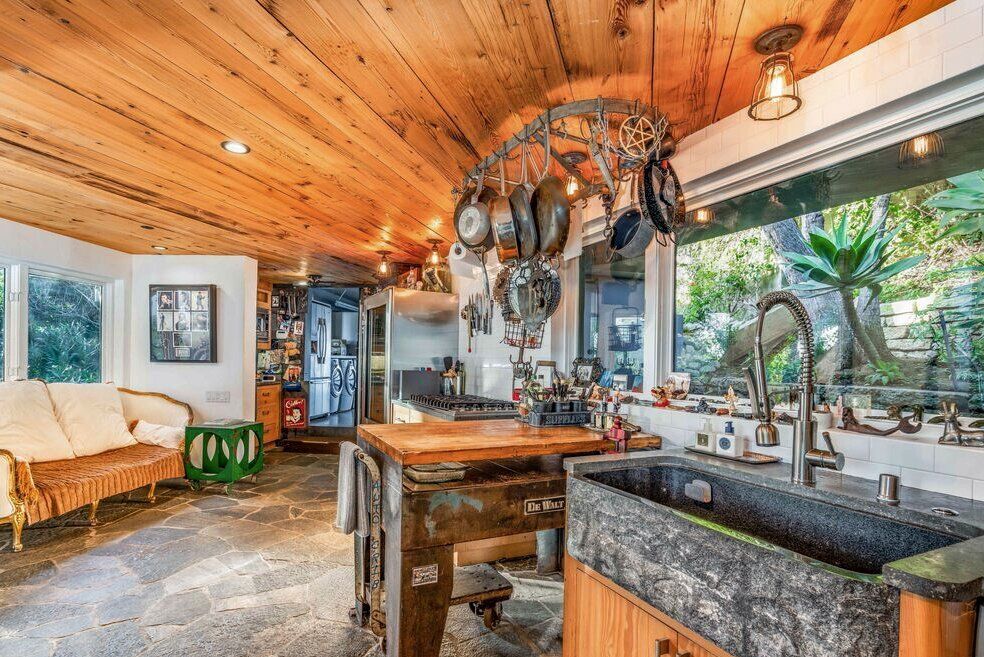 Natural elements can be found throughout, including exposed beams, wood-paneled ceilings, and stone flooring. In total, the home features three bedrooms, four baths, and a trove of luxe amenities, including glass-encased terraces and a large patio with a swimming pool and jacuzzi. Adding to the property’s charm, a restored 1957 Airstream trailer is also nestled on the lush one-acre lot. 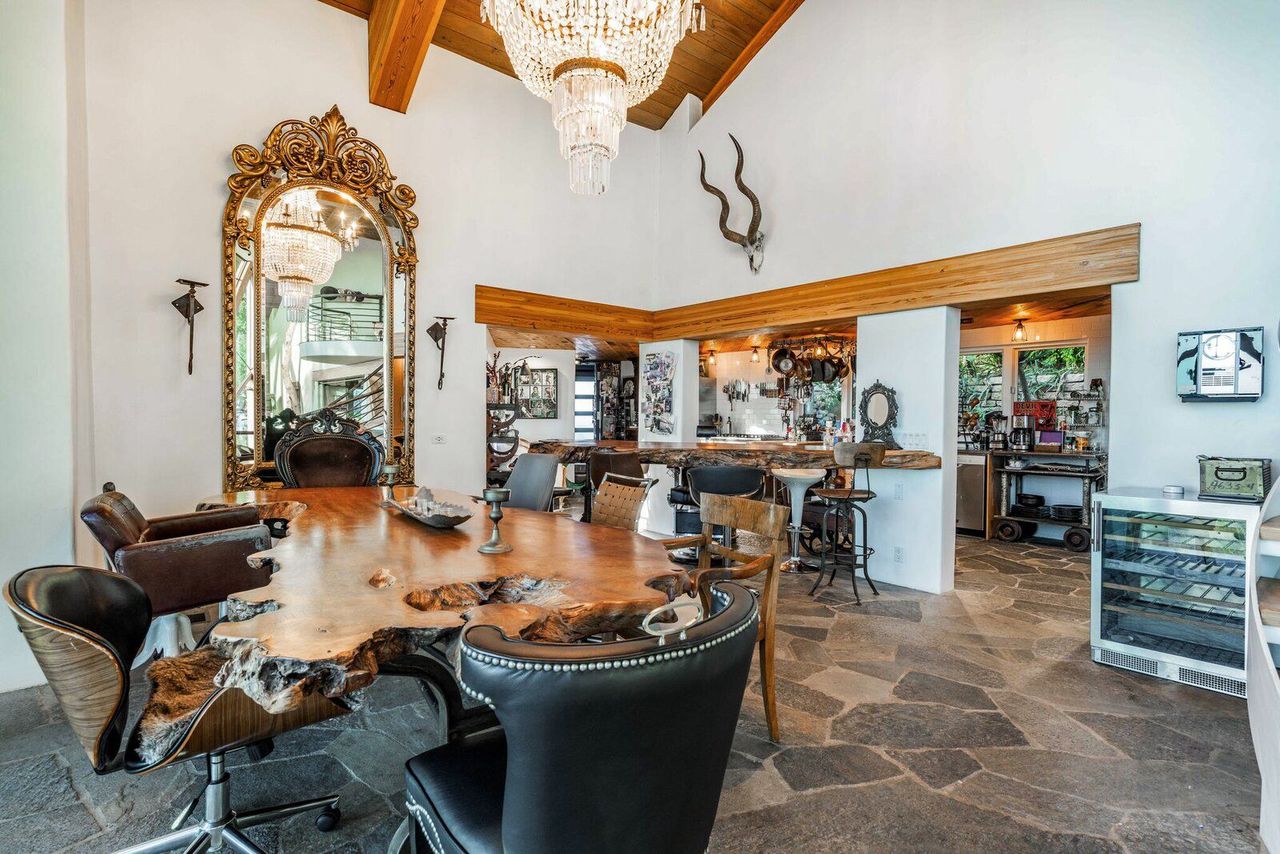 Tall ceilings continue into the dining area, which is connected to the kitchen via a wooden bar.

Per public records, the property last sold in 2008 to English businessman Gavin Cain for $3,900,000, who then collaborated with Gesner to remodel parts of the home before listing it on Airbnb as a short-term rental. While it surfaced on the market last year seeking $14,000,000, the estate is now re-listed for $9,500,000. Scroll ahead to see more. 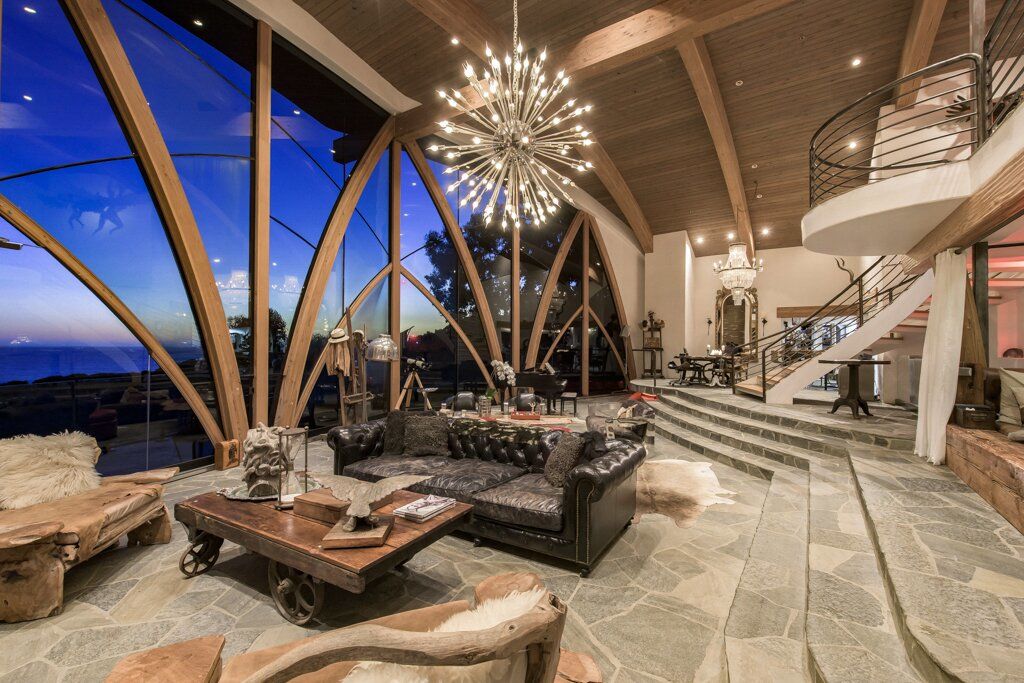 With its grand size and epic views, the living room offers an idyllic setting for large-scale entertaining. A large mezzanine overlooks the space and provides additional areas to gather. 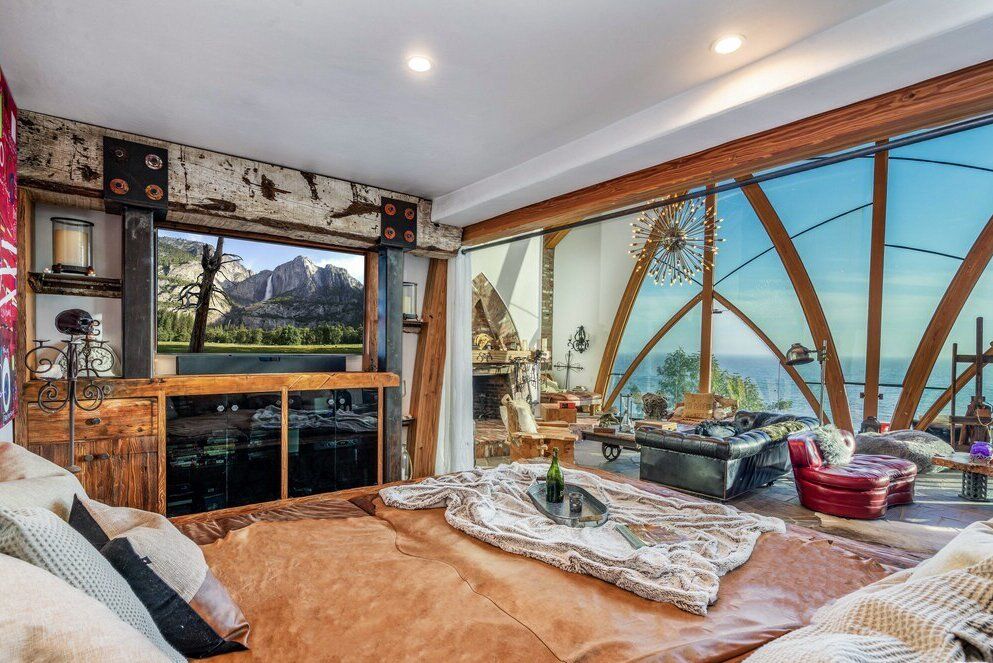 In total, the home offers three bedrooms, one of which is located on the main level near the primary living spaces. 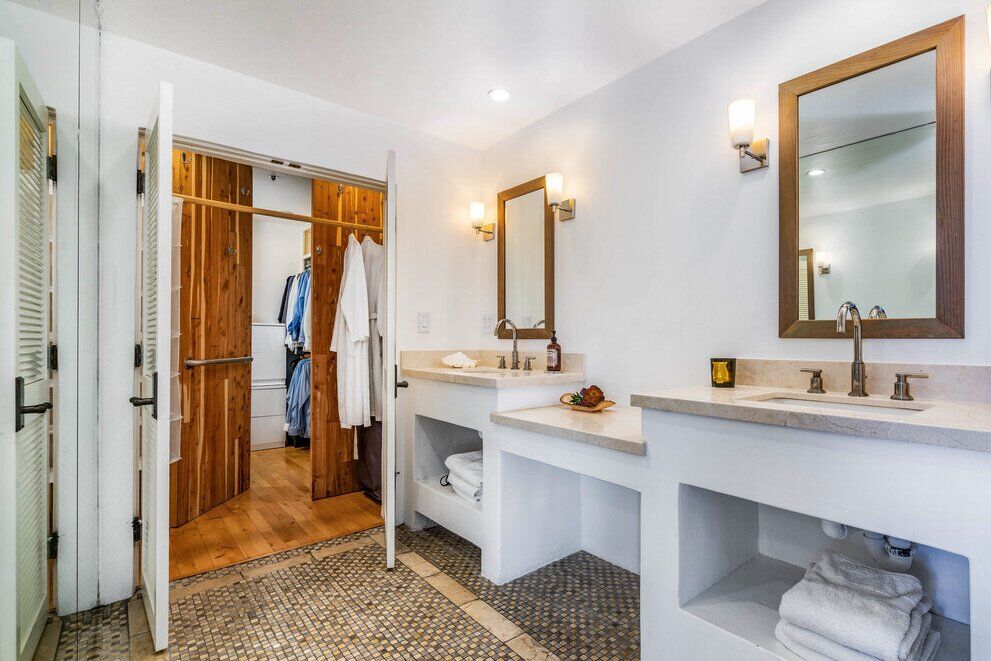 All four bathrooms are newly renovated. Here is a look at the principal bath, which connects to a spacious walk-in closet. 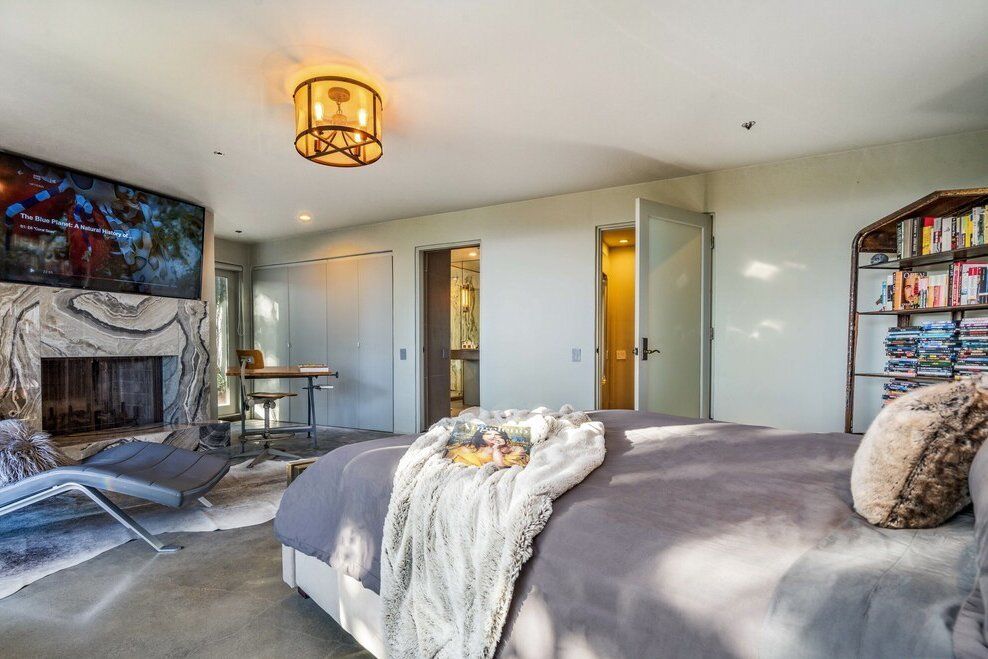 Luxe features pepper the property, including a swirled marble fireplace in one of the bedrooms. 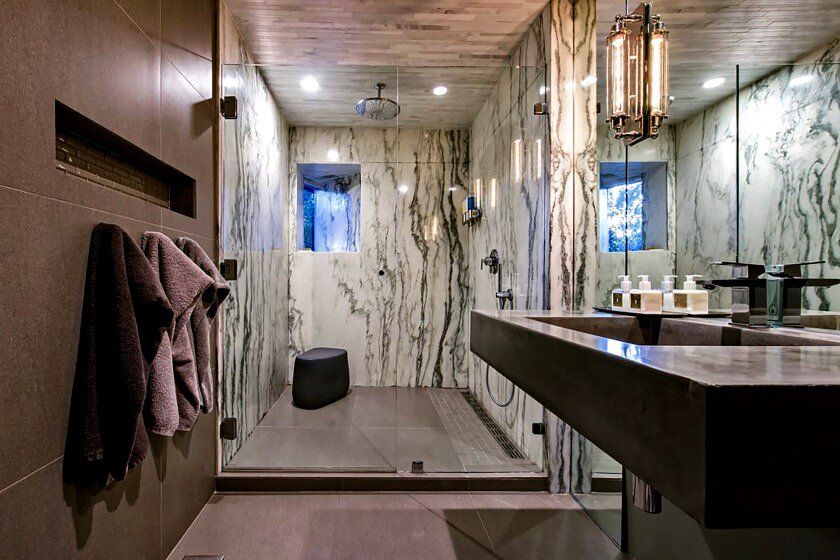 Marble continues into another one of the bathrooms, wrapping the large, glass-encased shower. A peek at another of the bedrooms, which features a fireplace and outdoor access.

The backyard is a tranquil retreat with a pool, jacuzzi, outdoor shower, and multiple places to gather, all enveloped by the home’s lush surroundings.