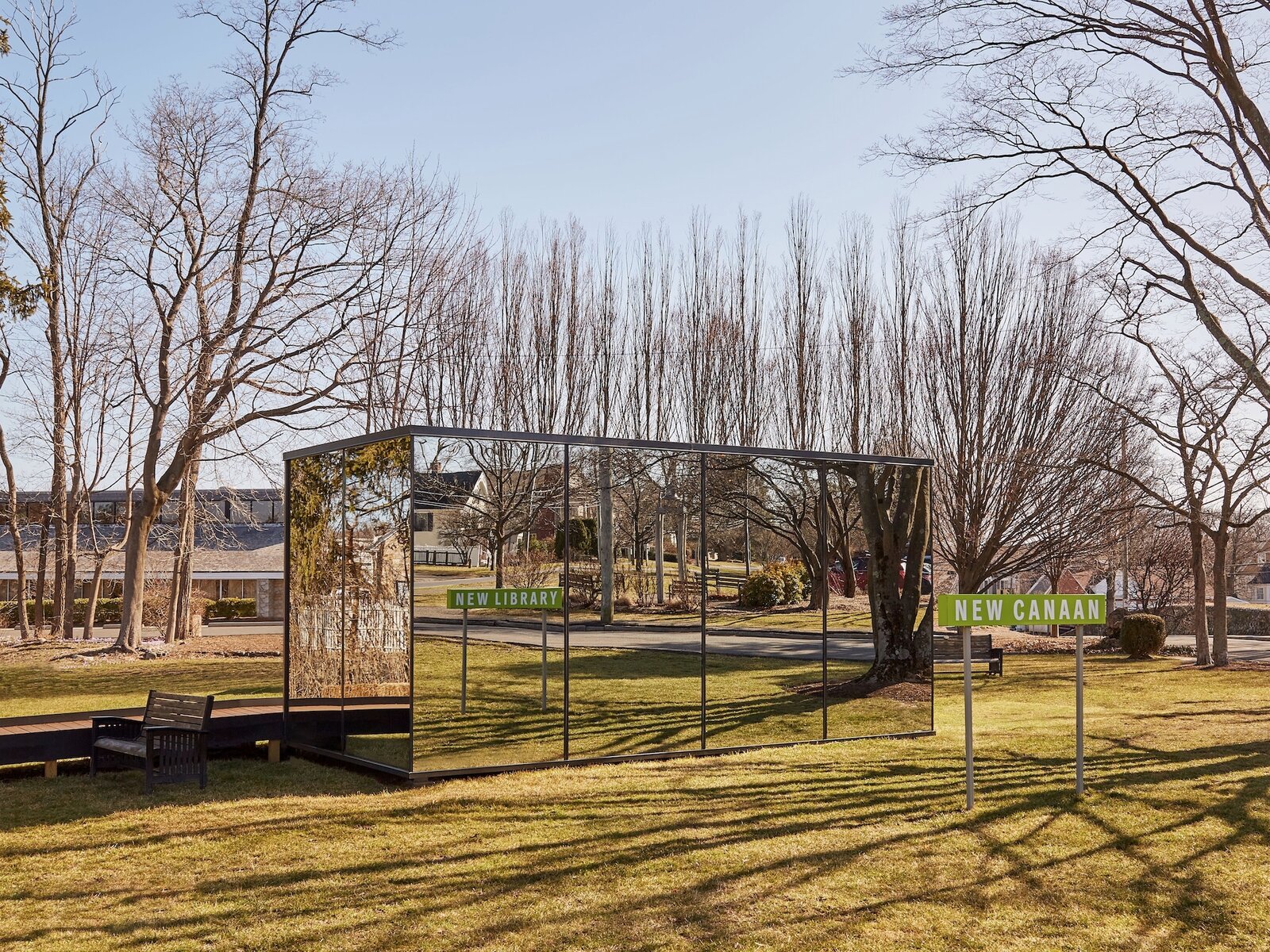 The Herman Miller at the Mirror House Auction-a fundraiser for the new library in New Canaan, Connecticut-goes live April 12 with a starting bid of $75,000.

The development team behind the new library in New Canaan, Connecticut, needed a private place to meet would-be donors-and an eye-catching way to raise awareness within the community. Ellen Sullivan Crovatto, head of the new library’s capital campaign, came up with a solution that not only honors the town’s role in design history, but also funnels funds toward the build. 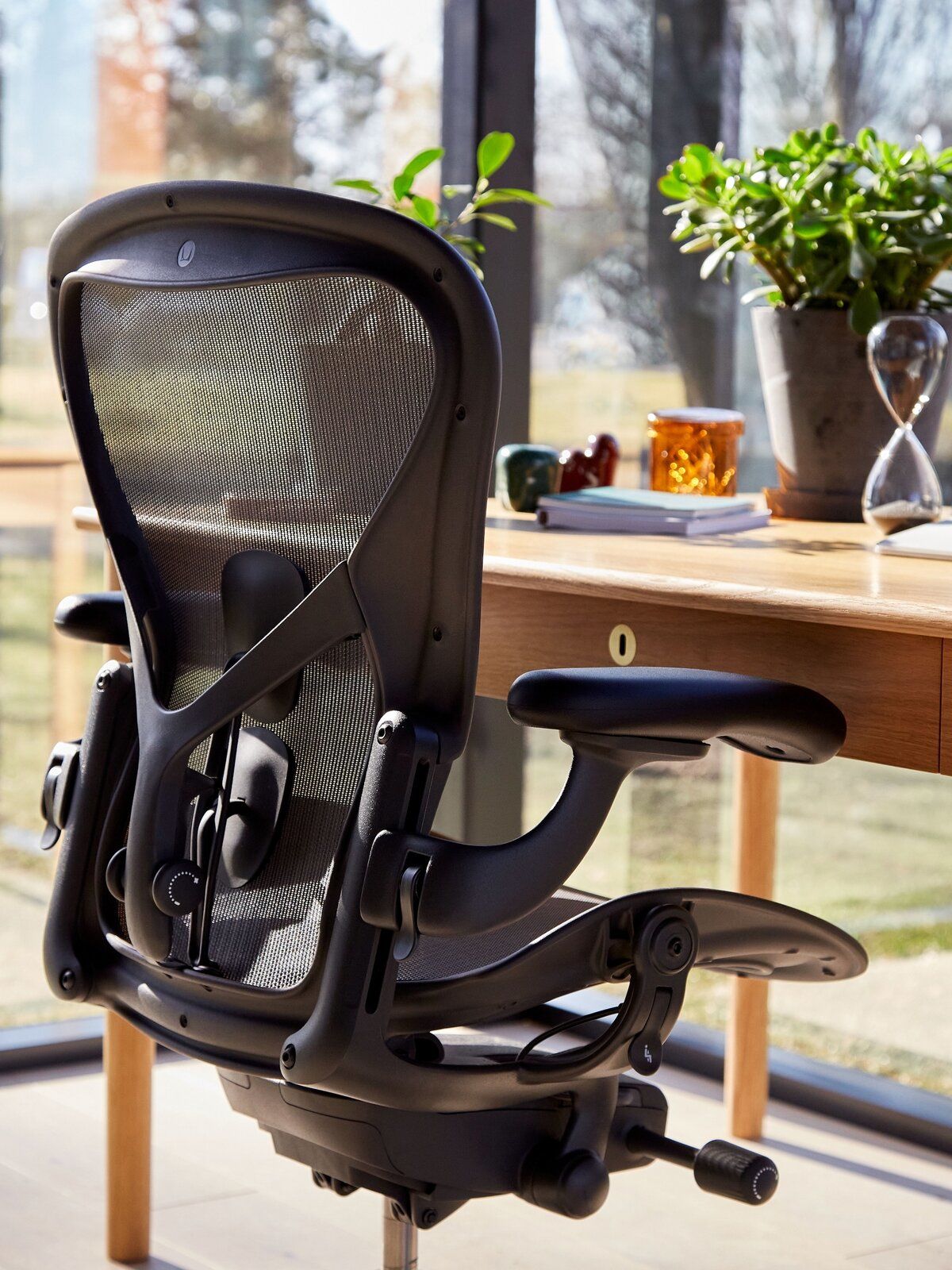 Outfitted with Herman Miller furniture, the mirrored prefab by Estonian company ÖÖD House sits on the front lawn of the existing library in New Canaan, Connecticut.

New Canaan’s midcentury modern tradition grew out of the influence of five architects from the Harvard Graduate School of Design known as the Harvard Five-Marcel Breuer, Landis Gores, John M. Johansen, Philip Johnson, and Eliot Noyes-who lived there in the late 1940s. In their design of the new 42,000-square-foot library, Centerbrook Architects & Planners paid homage to this tradition with modern forms, stone cladding, and dramatic expanses of glass. 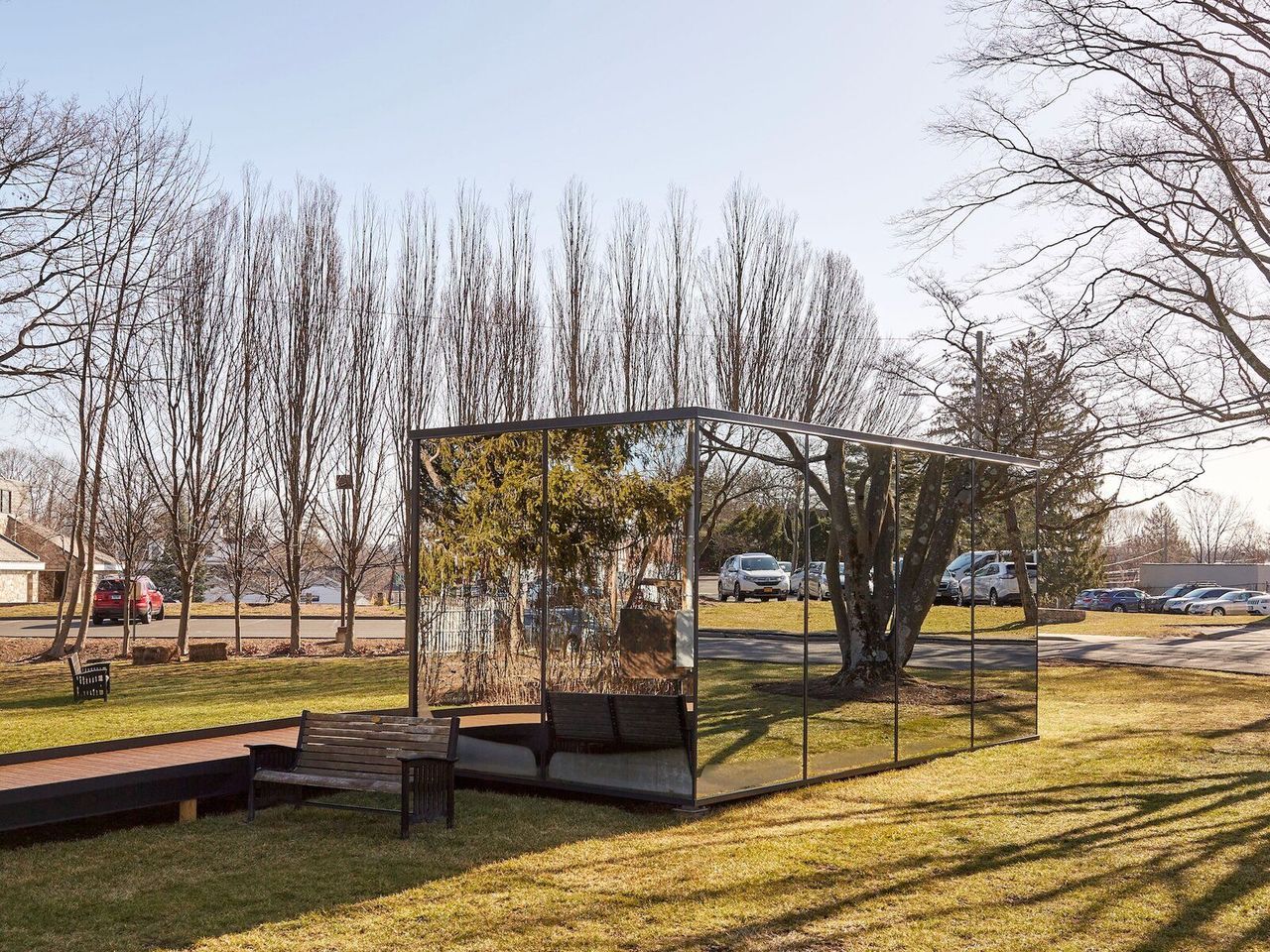 Crovatto notes that the minimalist ÖÖD House is the consummate metaphor for a library, inside and out.

"The mirrored surface speaks to the way our library, like the best libraries in the world, is a reflection of our community," she explains. "Inside the ÖÖD House, the glass is transparent; you can see everything that surrounds you. Libraries help make facts and information transparent to the general public. That’s what libraries are about." 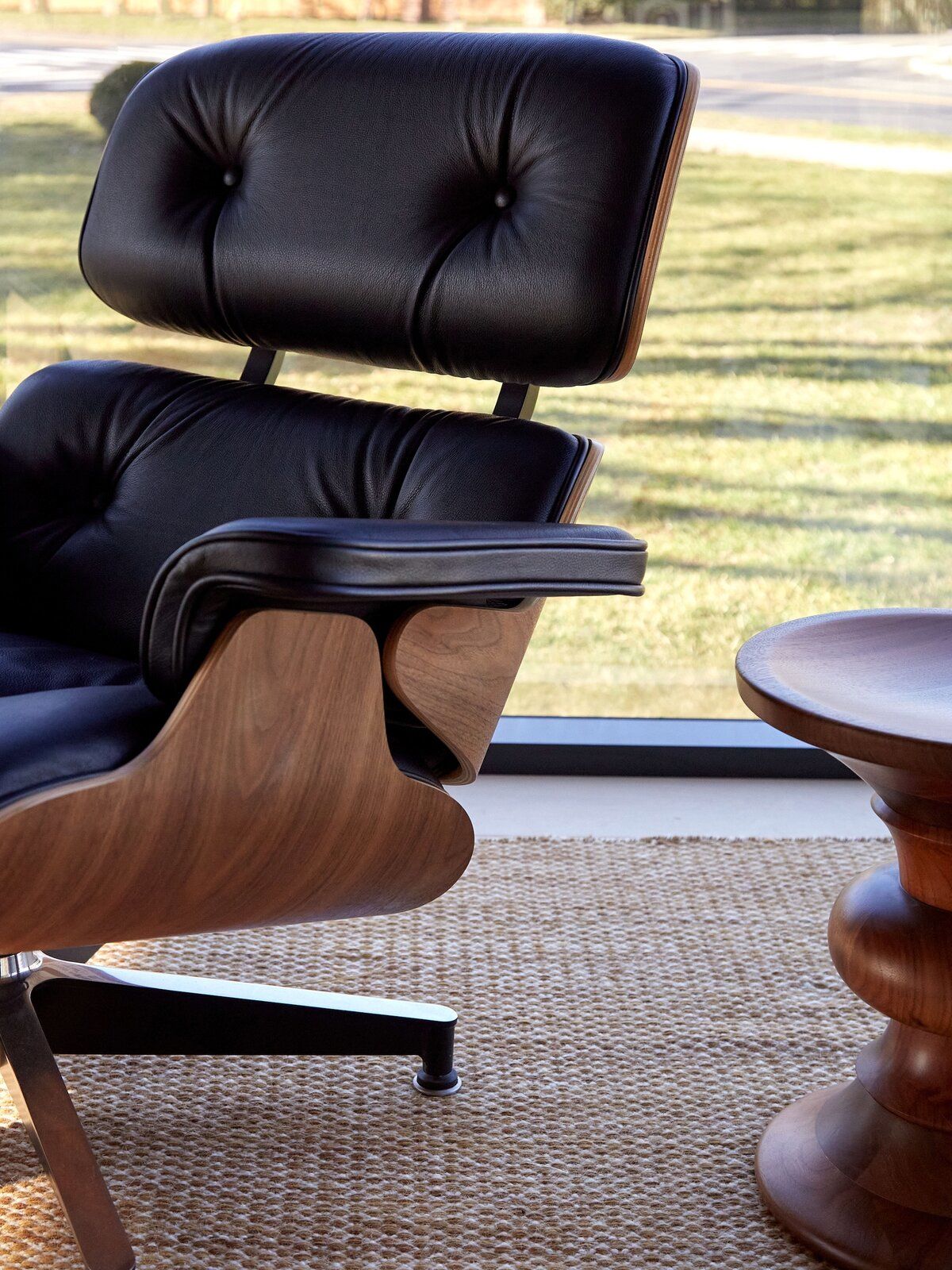 First imagined as a site for donor meetings, the space has opened for individual, self-guided tours and by-appointment work slots due to the pandemic.

When Crovatto learned that the ÖÖD House founders, Andreas and Jaak Tiik, drew inspiration from Philip Johnson’s Glass House, it sealed the deal. "That they’re referencing this New Canaan landmark in Estonia is incredible," she says.

The prefab package journeyed across the Atlantic Ocean on a container ship, landing in Fairfield County aboard an 18-wheeler shortly before the onset of the pandemic. With the plan for conducting donor meetings in the 224-square-foot space foiled, Crovatto and her team pivoted. While the shiny, flat-roofed structure could hardly host a huddle of library devotees and their fellow citizens, it could still be an on-site billboard for the campaign.

Set for auction on April 12, the prefab will come fully furnished with iconic Herman Miller pieces.

The committee engaged key players including Jim Childress of Centerbrook, the lead architect for the new building, as well as Margaret Russell, the former editor-in-chief of Architectural Digest and who grew up in New Canaan, to create short videos about different aspects of the project.

On September 15, 2020, the library unveiled the mirrored house and invited the public to step inside, one person at a time, to take an augmented-reality, self-guided tour on their tablet or smartphone. Committee members were on hand to answer questions outside. 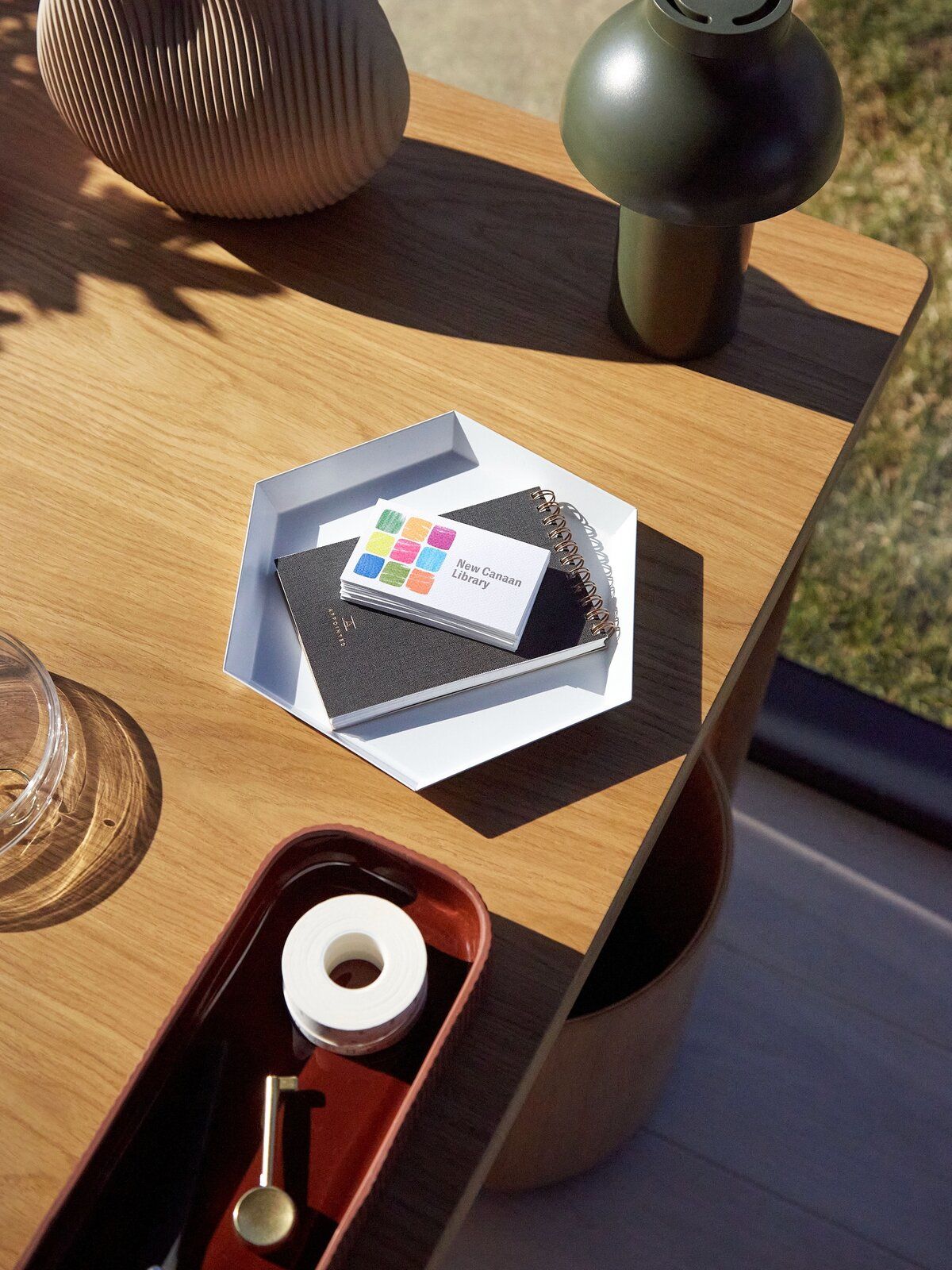 The buyer will also be recognized as a donor for the new New Canaan Library.

Debbie Propst, the president of Herman Miller Retail and a member of the library’s capital campaign committee, facilitated a collaboration with the company to outfit the prefab as an office. Furnishings include an Edel Table used as a desk, an Aeron Chair, and an Eames Lounge Chair, as well as other furnishings and accessories.

"We wanted to create the cozy office nook that everyone is desperate for these days; an office oasis," Jennie Maneri, art director of Herman Miller Retail, says. "It illustrates how the classics work in a contemporary setting and how you can mix styles from different periods to create something fresh and totally relevant for today."

The community has embraced the oasis. The committee invited residents to sign up to use the office for a 9-to-5 workday during the month of April, free of charge; only one person would be permitted inside. "The dates sold out within two hours," Crovatto says. 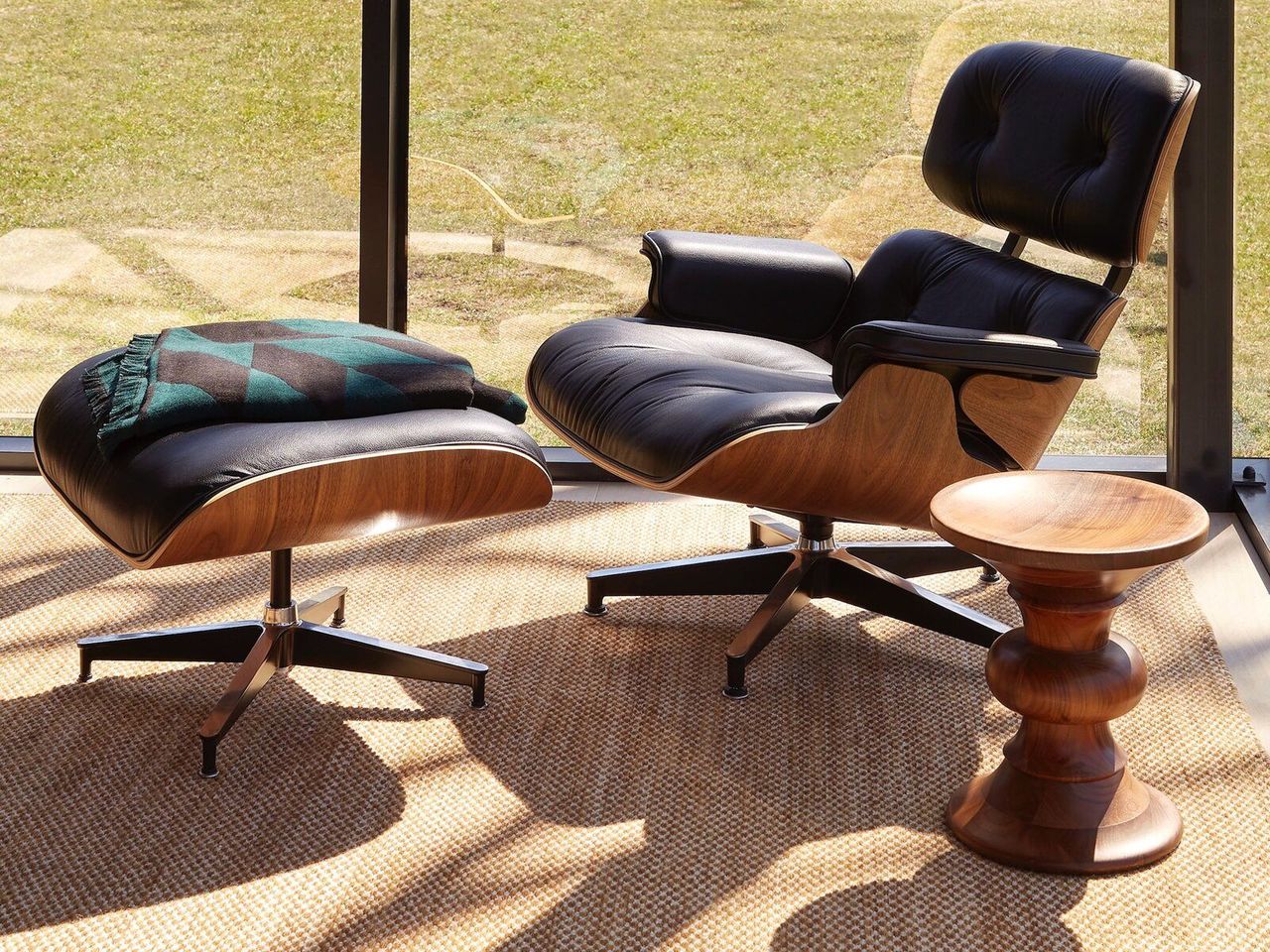 An Eames Lounge Chair and Ottoman are part of the package.

Soon, the furnished prefab will be looking for a new owner, and proceeds will benefit the library. On Monday, April 12, 2021, the Herman Miller at the Mirror House Auction goes live with a starting bid of $75,000, and concludes at noon on May 1, 2021. The library will also hold open houses on Saturday, April 17 and Saturday, April 24. The structure must be removed by June 1, 2021, when the team breaks ground for the new library.

"It’s a turn-key office, yoga studio, guest room, or pool house," Crovatto says. "It’s on a metal undercarriage, so it can be lifted by crane to a flatbed truck, and our construction advisor can help with logistics. It just needs a foundation and crane on the other end." "It’s a turn-key office, yoga studio, guest room, or pool house," says Ellen Sullivan Crovatto, who dreamed up the concept. "It just needs a foundation and crane on the other end."