A Czech designer partners with local stonemasons and carpenters to convert a tattered structure into a boutique guesthouse in the Carpathian Mountains.

At the foot of the Western Carpathians in the Czech Republic sits an inviting, two-story holiday home that dates back to the 1800s. Known as Mezi Lukami-which is Czech for "between meadows"-the historic barn was restored by Czech designer Daniela Hradilová and her partner, Petr Hradil, to serve as the fifth guesthouse for their nearby boutique hotel, Mezi Plutky, which the duo opened in 2017. 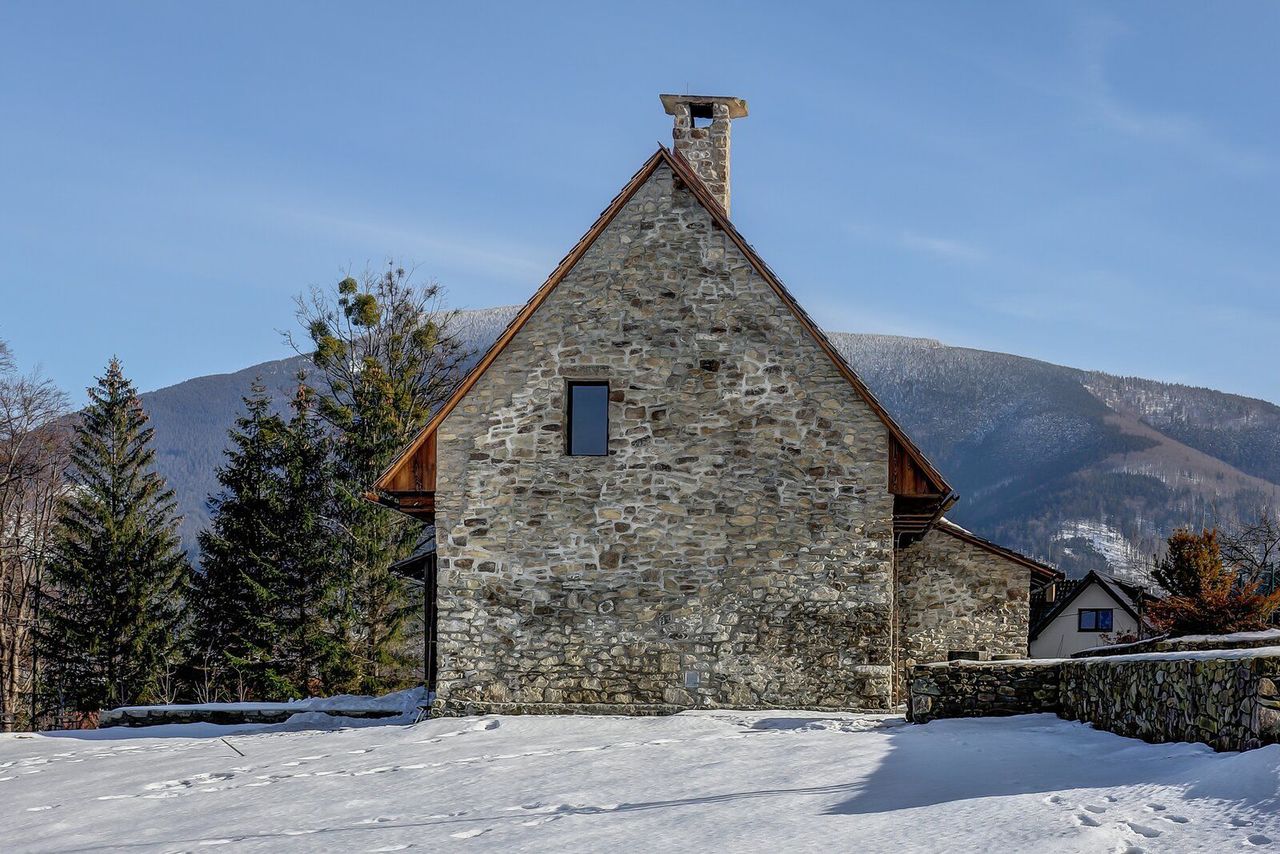 Set in the village of Čeladná in the Beskydy Mountains (which are part of the Western Carpathians), the restored Czech guesthouse was originally built to serve as a house and barn.

The 19th-century building, which was originally built in the typical vernacular of the Moravian Wallachia region, had fallen into ruins when the previous owners approached Hradilová and Hradil to rescue it. After getting a proper sense of the structure’s storied past as one of the oldest buildings in the area, the designer and her husband were eager to revive it. 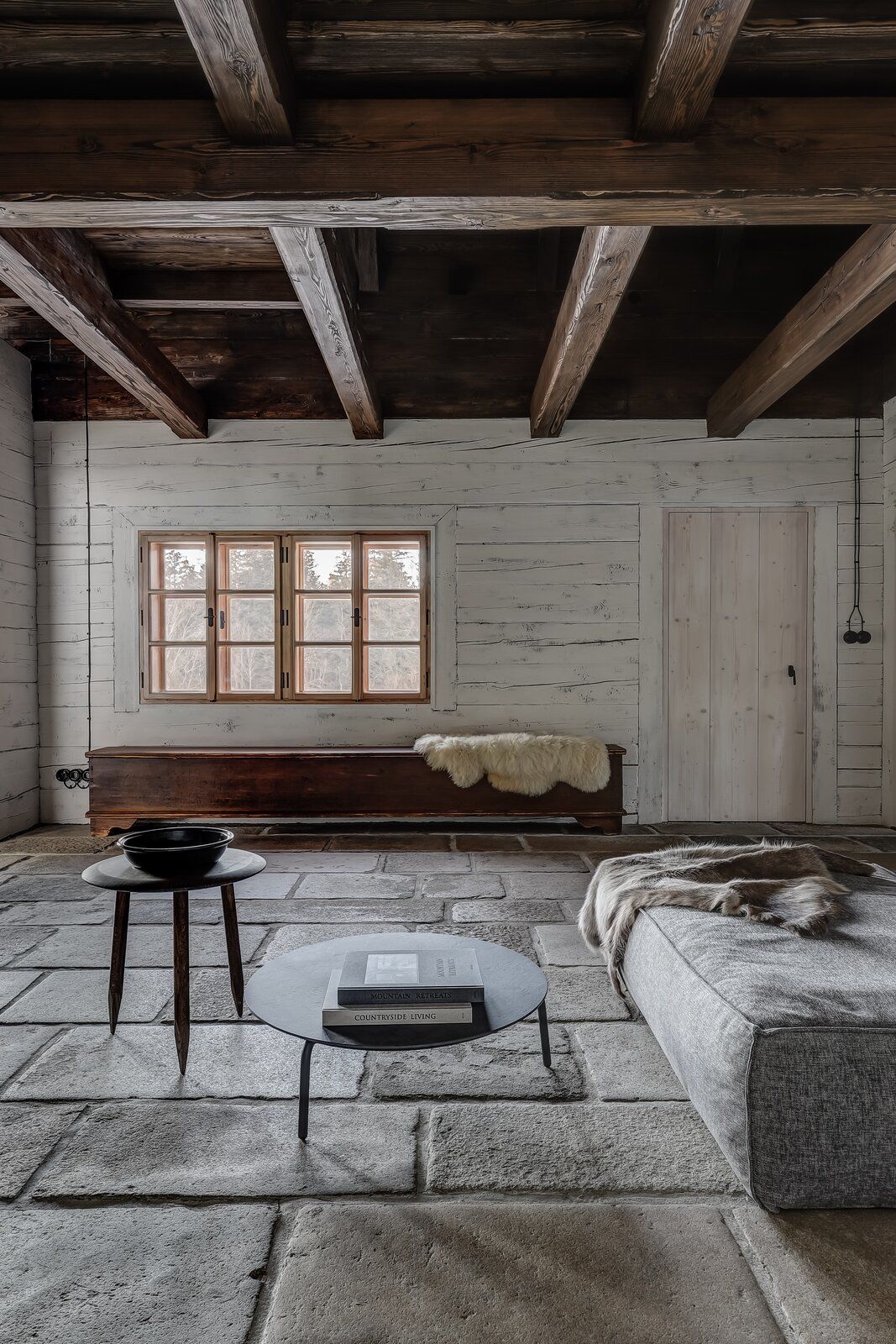 As part of the renovation, the former entrance hall was converted into the main living room.

Hradilová placed great emphasis on the building’s history to influence not only the new design, but also the surrounding setting. "An essential aspect that all my projects have in common is that they are created with great care and calm," she explains to Urlaubsarchitektur, Europe’s leading platform for architecture-focused holiday homes. "I approach them with respect and humility for the buildings and the people who lived there." 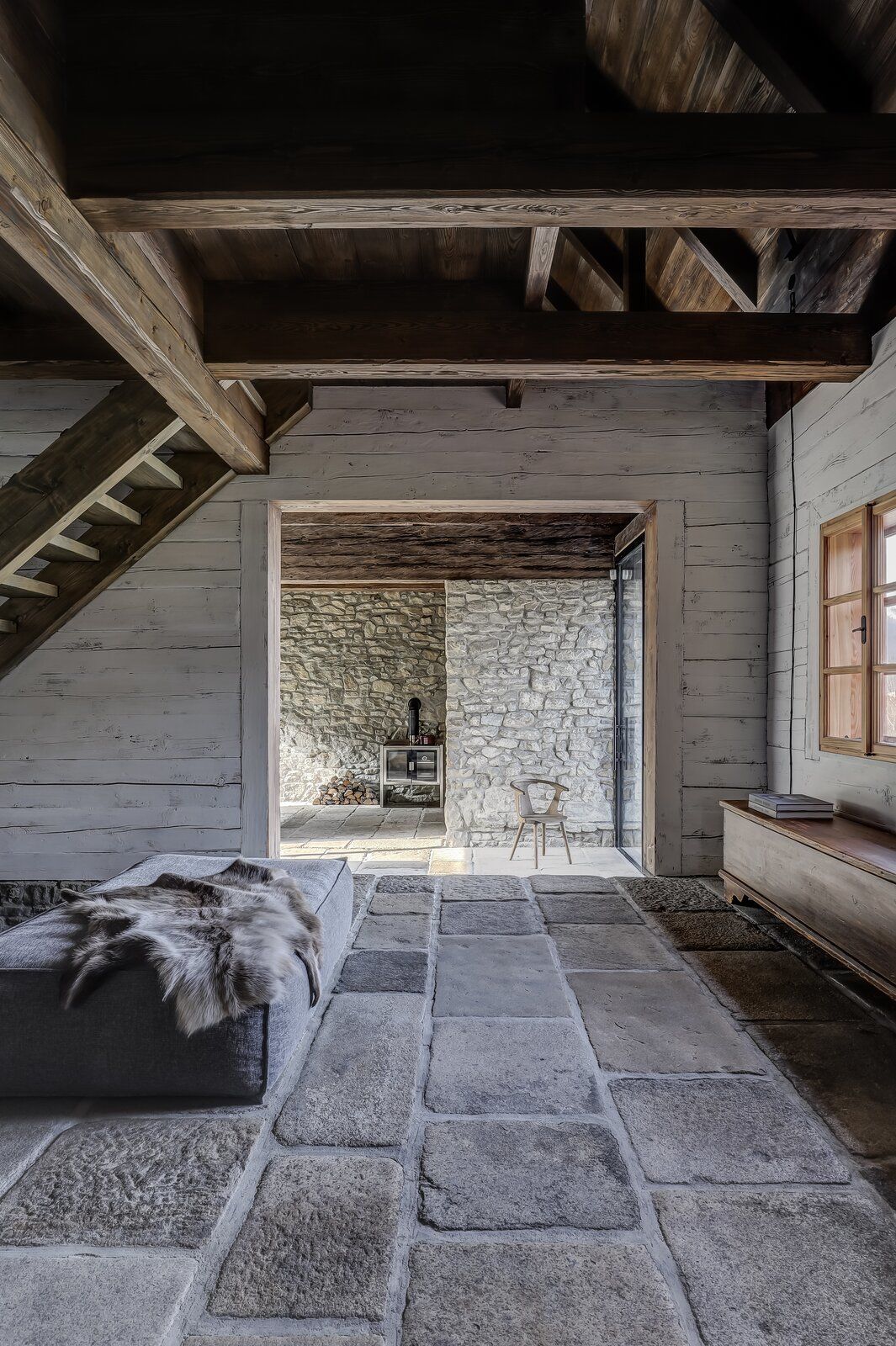 Hradilová decorated the home with simple pieces that emphasize the interior’s original details. In the living room, a gray sofa complements the stone floors, while wooden chairs and storage consoles contrast with the whitewashed walls.

With the help of experienced local carpenters and stonemasons, Hradilová relied on "ingredients" found on-site-such as natural stone and wood-to reconstruct the volume into an inviting space that encourages visitors to linger. An oven that resembles a wood-burning stove infuses the kitchen with warm, cozy vibes.

Now, the converted guesthouse spreads across nearly 2,800 square feet in the alpine village of Čeladná, which is located in the Beskydy Mountains within the Western Carpathians. Timber walls and beamed ceilings pay homage to the structure’s past, while also complementing the restored, stone-clad walls and floors. Sliding glass doors and large picture windows imbue the moody interiors with a natural glow. 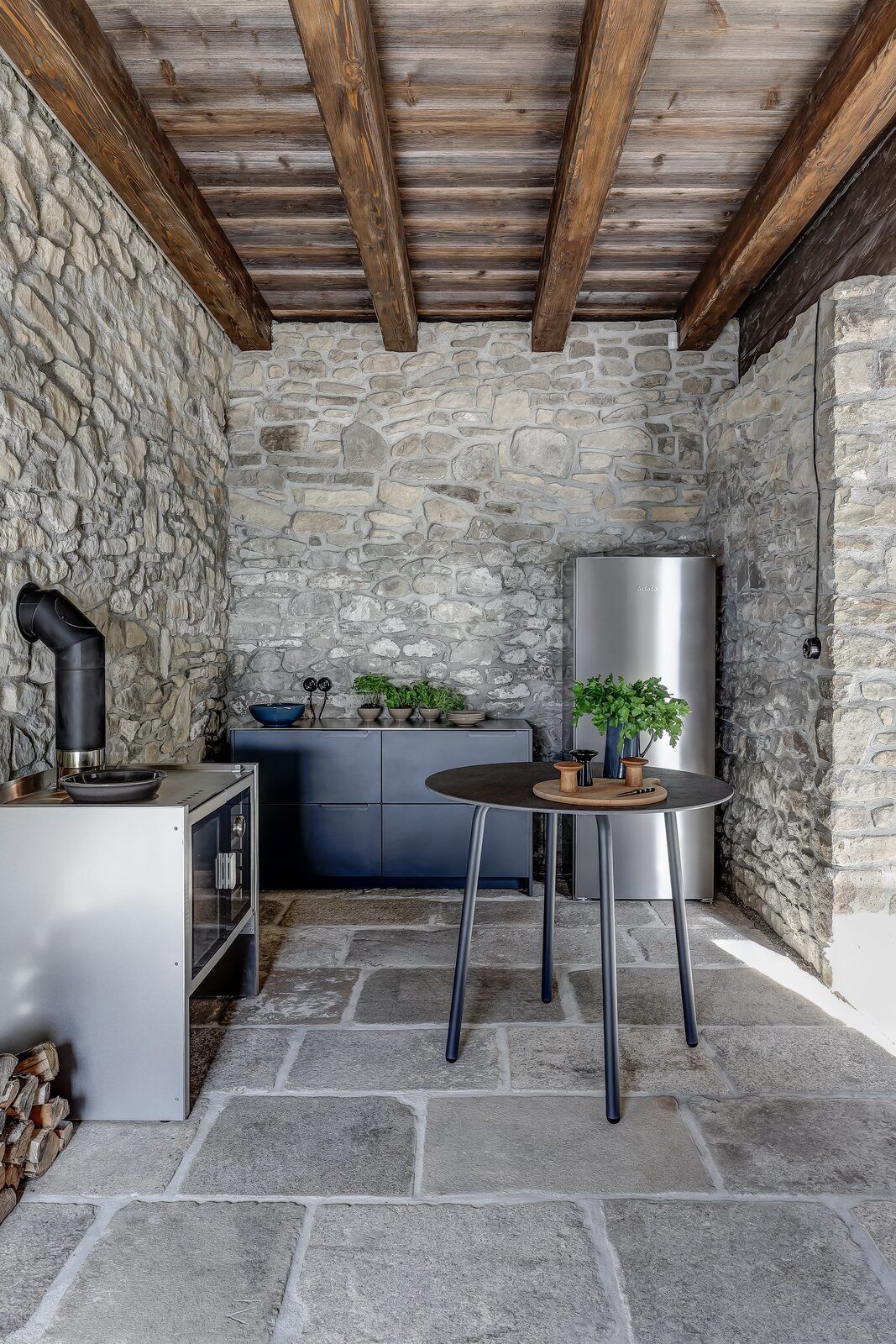 The Mezi Lukami guesthouse comfortably sleeps four guests, with one bedroom located on the main floor and another on the upper level-both fitted with original floorboards and whitewashed wooden walls. 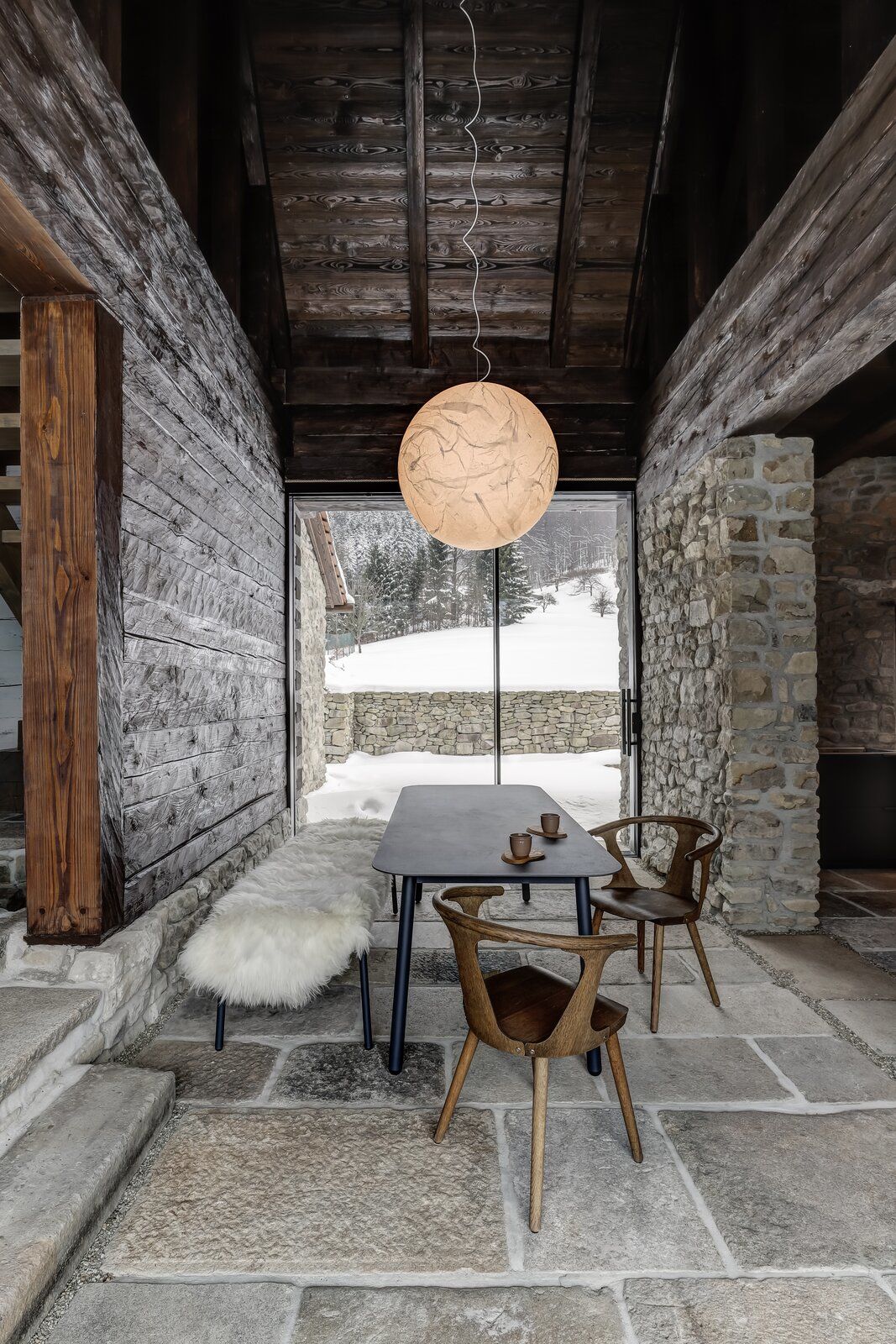 The dining area is located in what used to be the passageway between the house and the barn. Lighting designer Davide Groppi’s Moon luminaire hangs above the table near tall, sliding glass doors that extend the space to the enclosed yard.

According to Hradilová, the detailed renovation wouldn’t have been possible without the help she and her husband received from local people who work in various trades. "At a time when traditional craftsmanship is disappearing, their art and passion is a kind of miracle," she states. 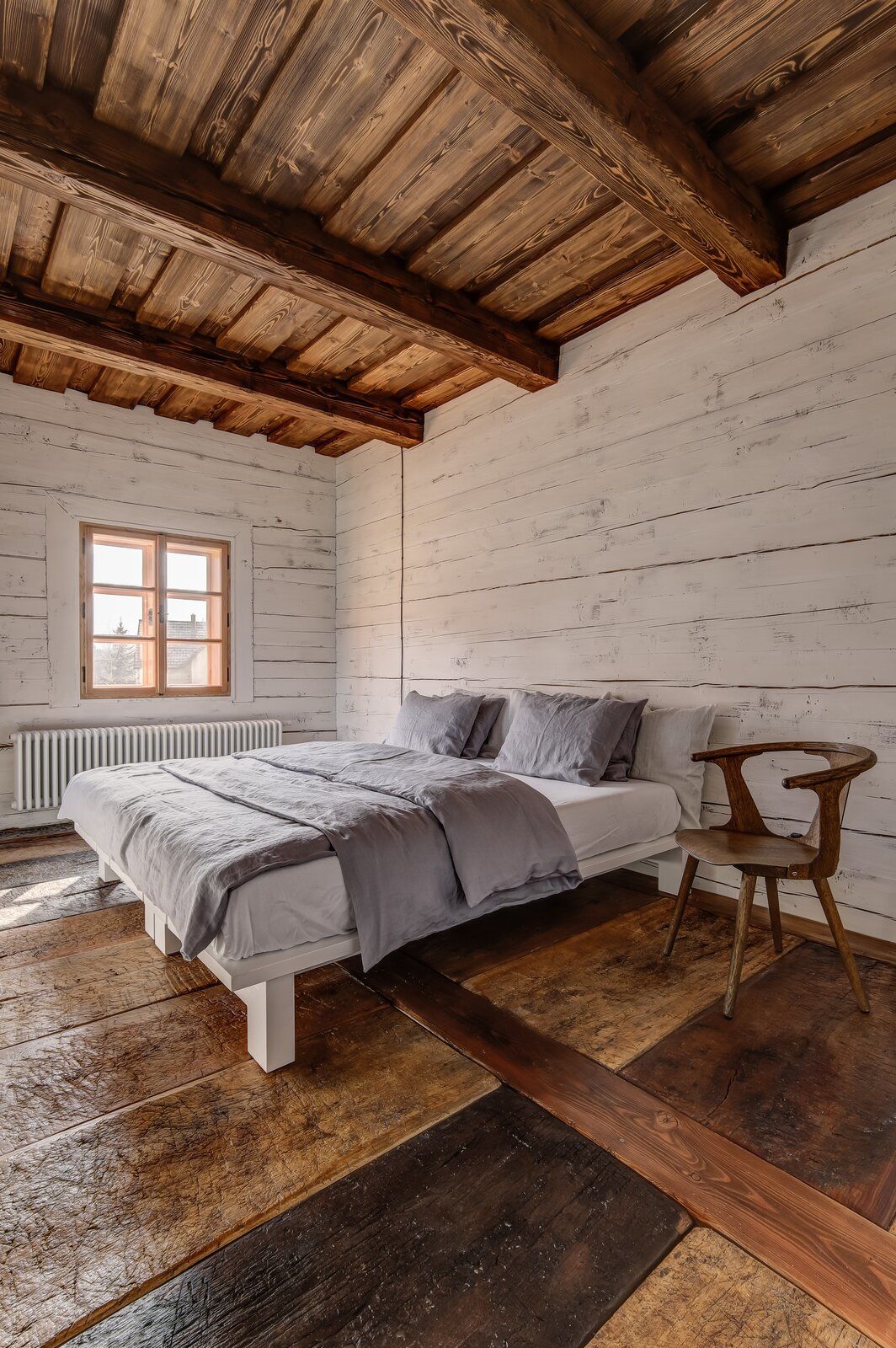 The bedroom on the main level is fitted with wide-plank floorboards, whitewashed walls, and exposed beam ceilings, which presents a similar aesthetic to the primary living spaces. 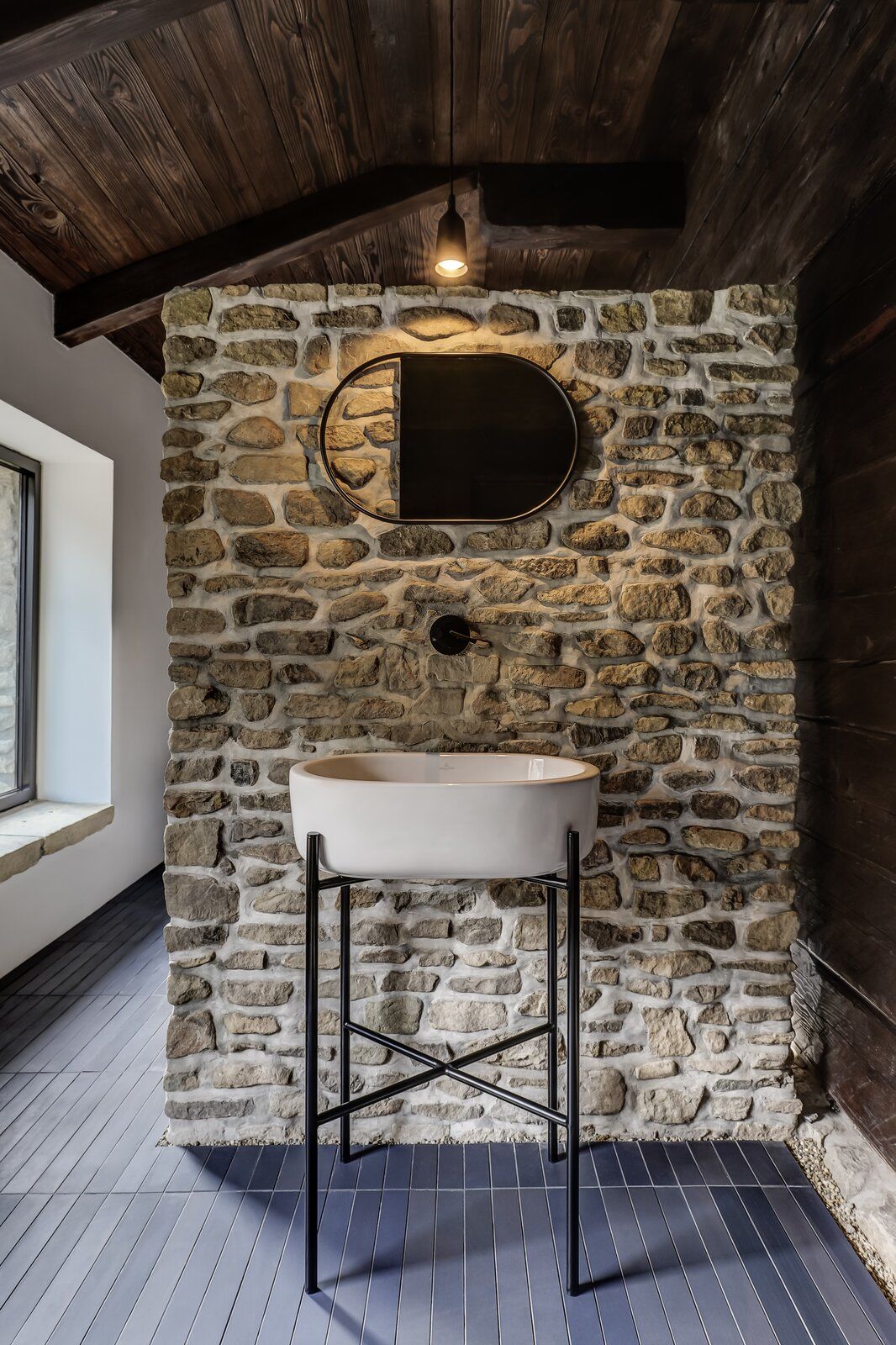 Blue hues continue into the guesthouse’s bathroom, where an elegant, oversize sink is controlled by a black faucet handle carved into the stone wall. 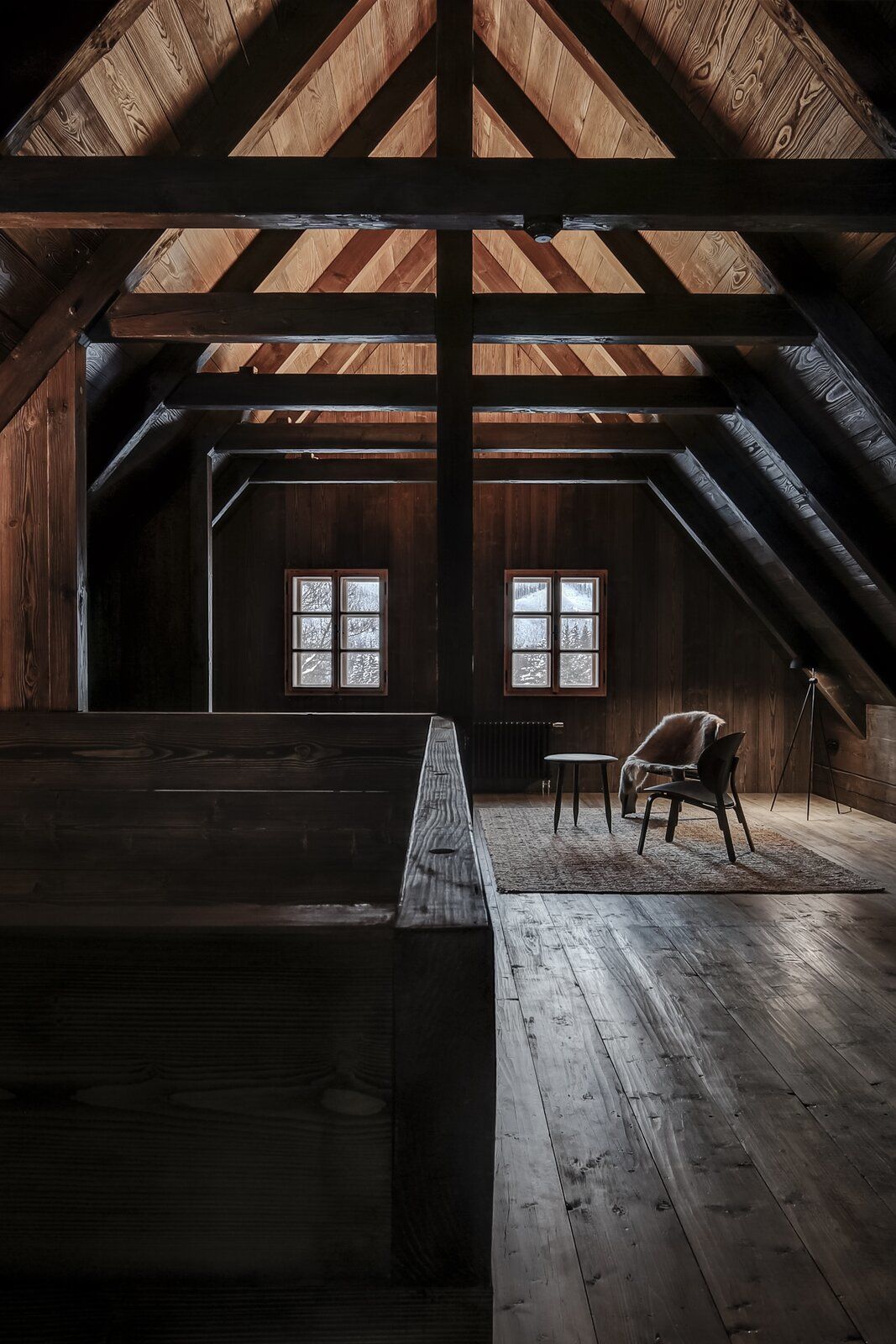 Upstairs, a loft awaits with picture windows that overlook the alpine landscape. The deliberately placed lighting enhances the moody ambience of the space. 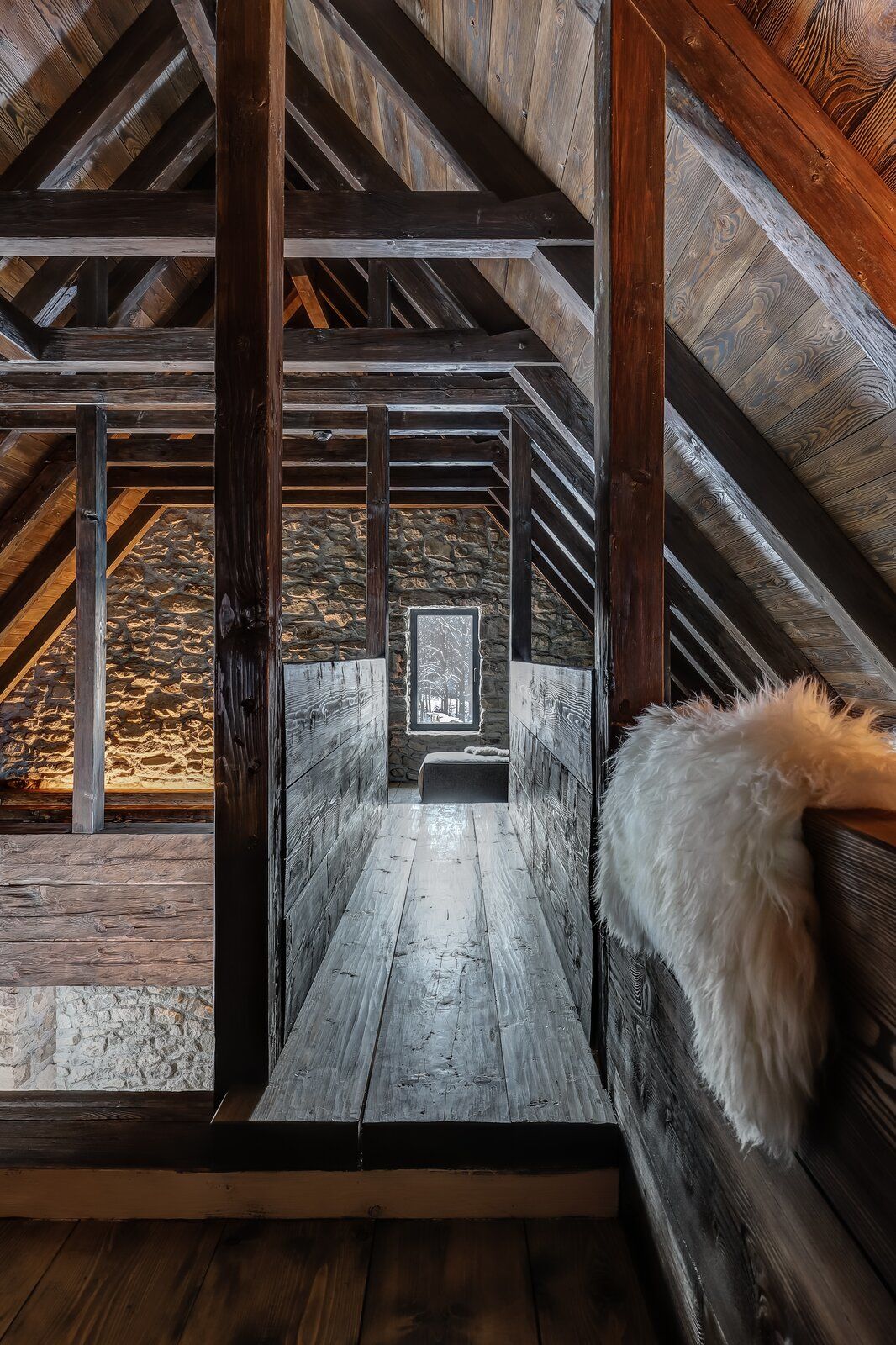 The loft also features a gallery above the dining area, which connects to the additional bedroom. The dark, timber-clad walls and ceilings recall the structure’s pastoral heritage while presenting a calming oasis for guests to sleep, read, and unwind.