How Neutra’s Kaufmann House Got its Groove Back

Marmol Radziner and homeowner Brent Harris shed light on the exhaustive, five-year process of unearthing the plans for Richard Neutra’s iconic Kaufmann House in Palm Springs—and the meticulous work it took to recreate its design.

It would begin with one full year of research. Every day, for four of those months, the architectural restoration team donned gloves and combed through the archives at the UCLA Research Library to solve the puzzle of Richard Neutra’s famed Kaufmann House, completed in 1946 and since fallen into disrepair. Floors were cracked, casework had been removed, portions of the land had been sold, and the square footage had nearly doubled through additions over the years.

Sans original plans, they visited the archives daily, redrawing everything original they could capture by hand as part of an intensive, five-year restoration project taken on by the new homeowners. "There are truly iconic, important pieces of architecture, and this is one of those," says Ron Radziner, design partner at Marmol Radziner. "This is one of the 20 best homes in this country, and it deserved that level of restoration." 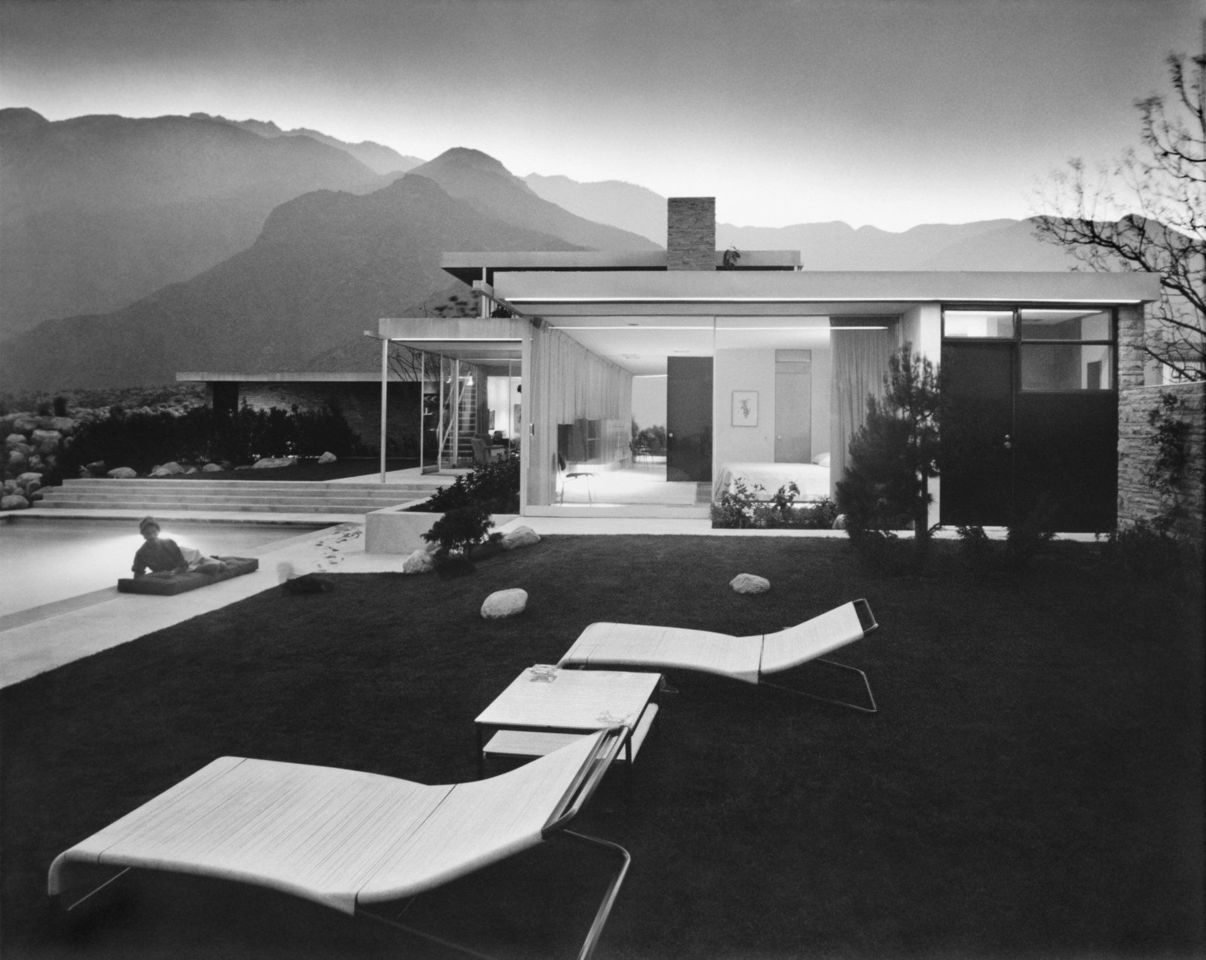 The year was 1993, and the internet was not what it is today, but they kept on. In addition to the work at UCLA, research also included time spent on-site, unearthing years of additions and modifications to the home in search of any clues they could find, such as the original mica plaster hidden behind an electrical box, identified through microscopic evaluation.

It would also include sifting through the archives of Julius Shulman, the world-renowned photographer who documented the home in its heyday and shared never-before-seen photos with the restoration team. It was those photos that would drive the entire restoration.

"After looking at the archives of Julius Shulman, it led us to better understand that it was quite a work of sculpture and much richer than really anyone knew, because nobody had seen Julius’ archives," says homeowner Brent Harris, who undertook the restoration with his former wife, Beth Harris. "The decision was made when we saw the famous Shulman photo from 1947, the twilight photo. It was taken in one snap-a one-time exposure. It seemed like right place to take the home back to." 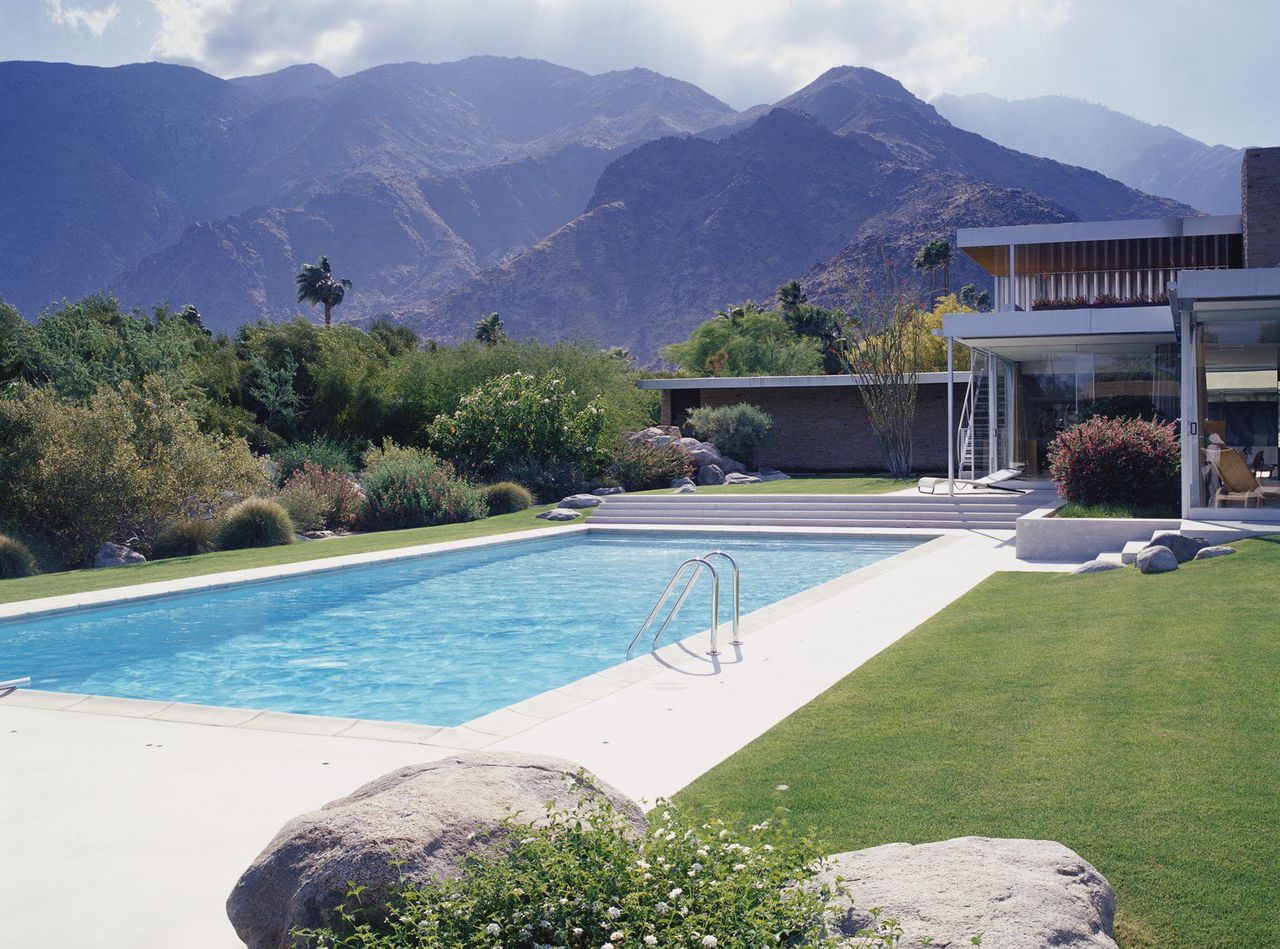 "Neutra didn’t create the mountain. And the client bought wonderful land. If it didn't have mountains and the step down, it wouldn't be what it is," says owner of the Kaufmann House Brent Harris.

The research team also discovered letters from Neutra to the original owner, Edgar Kaufmann, a wealthy department store owner who sought this property as a vacation home. He passed away in 1955, when the home was sold to a series of owners, including Barry Manilow. The letters helped solve what Harris describes as "a gigantic, national scavenger hunt for the pieces that were gone." They contained specs, sketches, and material details, which led to the team to identify the original buff stone. It originated from a quarry in Utah. Conquering all obstacles in pursuit of authentic restoration, the team trekked to the original source to procure the correct stone, which bears a sunset hue unlike the muddy shade of buff stone you'll find across the masses today. 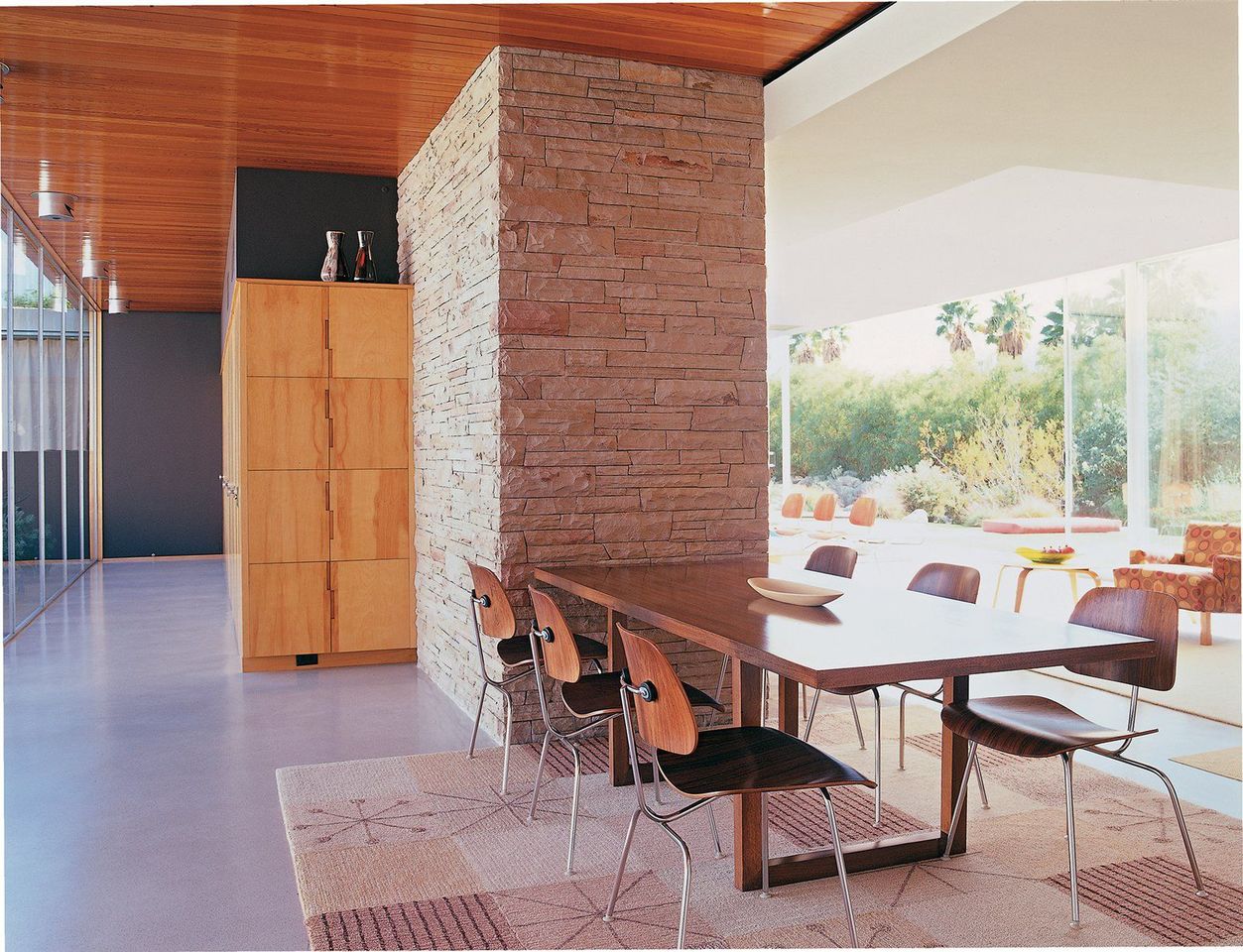 Slight modernization was thoughtfully incorporated into the restoration, including a cooling solution. "We wanted to lengthen the life of the home and make it more enduring," says Ron Radziner of Marmol Radziner. Air conditioning was added in a concealed fashion. Above, where the wood meets the plaster at the ceiling, an air return is carefully hidden, and ducting runs beneath the floor.

A final piece of the puzzle was consulting with several experts, including another architect who helped build Palm Springs, Albert Frey. "He taught me the importance of materials," says Harris, who worked closely with Marmol Radziner throughout the restoration.

It wasn’t enough to just acquire the original stone; it would have to be set by the best masons they could find. It was initially installed using a dry stack technique-new to Neutra’s work-whereby mortar is applied to the rear of the stone, resulting in a natural look invisible to the eye. A mason worked at the site for a year and a half, chiseling and cutting blocks precisely in place to create a pleasing mosaic. While perfecting the brick took quite some time, just fewer than 10 percent of the brick was restored, demonstrating stone mason Clive Christie's commitment to his craft. Tops and bottoms were cut smooth to sit in horizontal position, allowing the sides and faces to be more organic. But the stone wasn’t the only meticulous detail of the renovation. 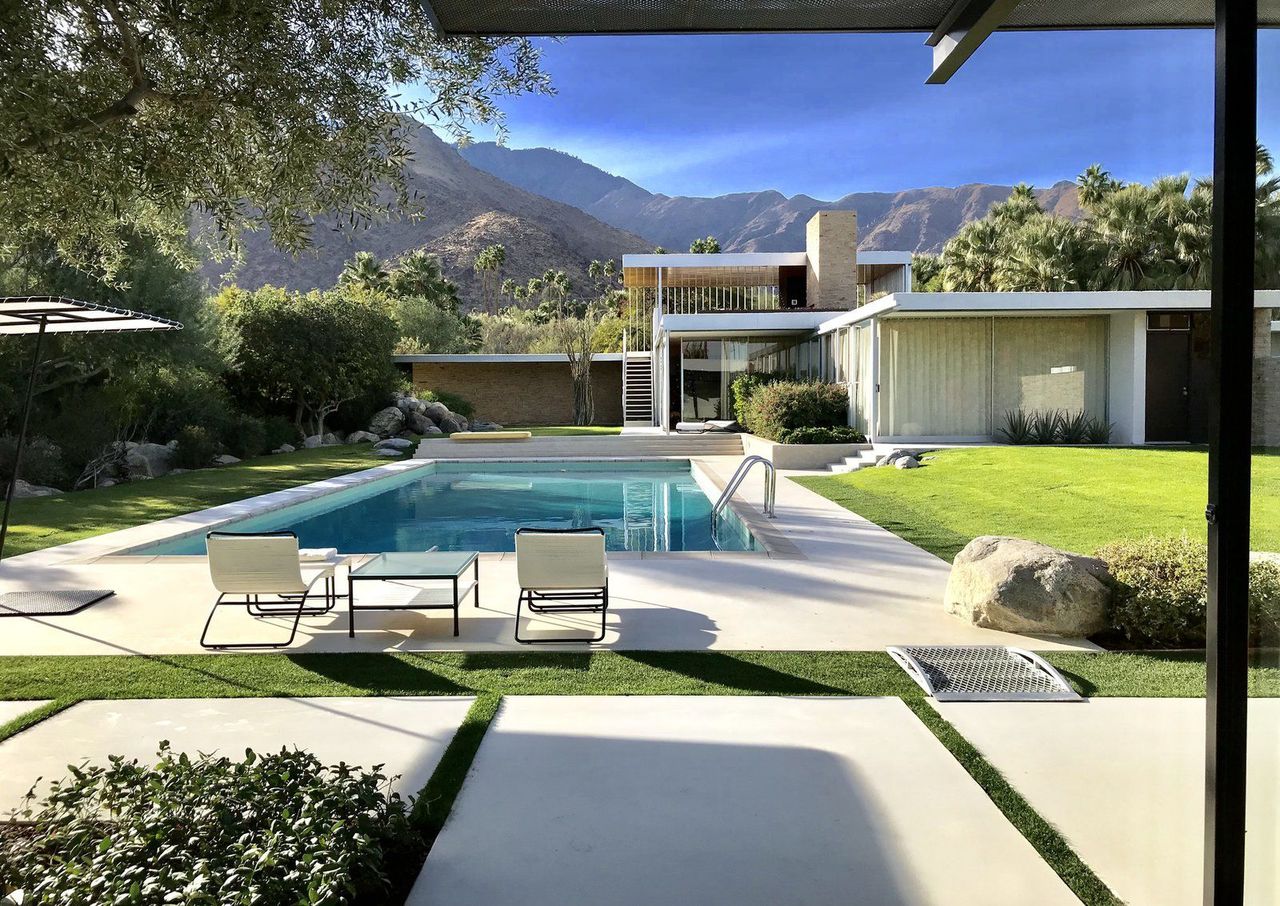 The vantage point of the famed "poolside gossip" photo that made Richard Neutra's Kaufmann House so well-known.

The fascia sent the team on wild goose chase-or rather a crimped metal chase. They had never before seen that vertical pattern in metal and set out on a mission to reproduce the material. After sending 3" x 3" samples to sheet metal fabricators nationwide, they found a clue. A fabricator in Kansas City, Missouri, recognized the pattern-and likely made the original. They resuscitated an old machine they hadn’t used in 30 years to replicate the design. "We have worked on many renovations and have never done a project to that level of authenticity," says Radziner. "This was about expressing what Neutra originally intended, not us." 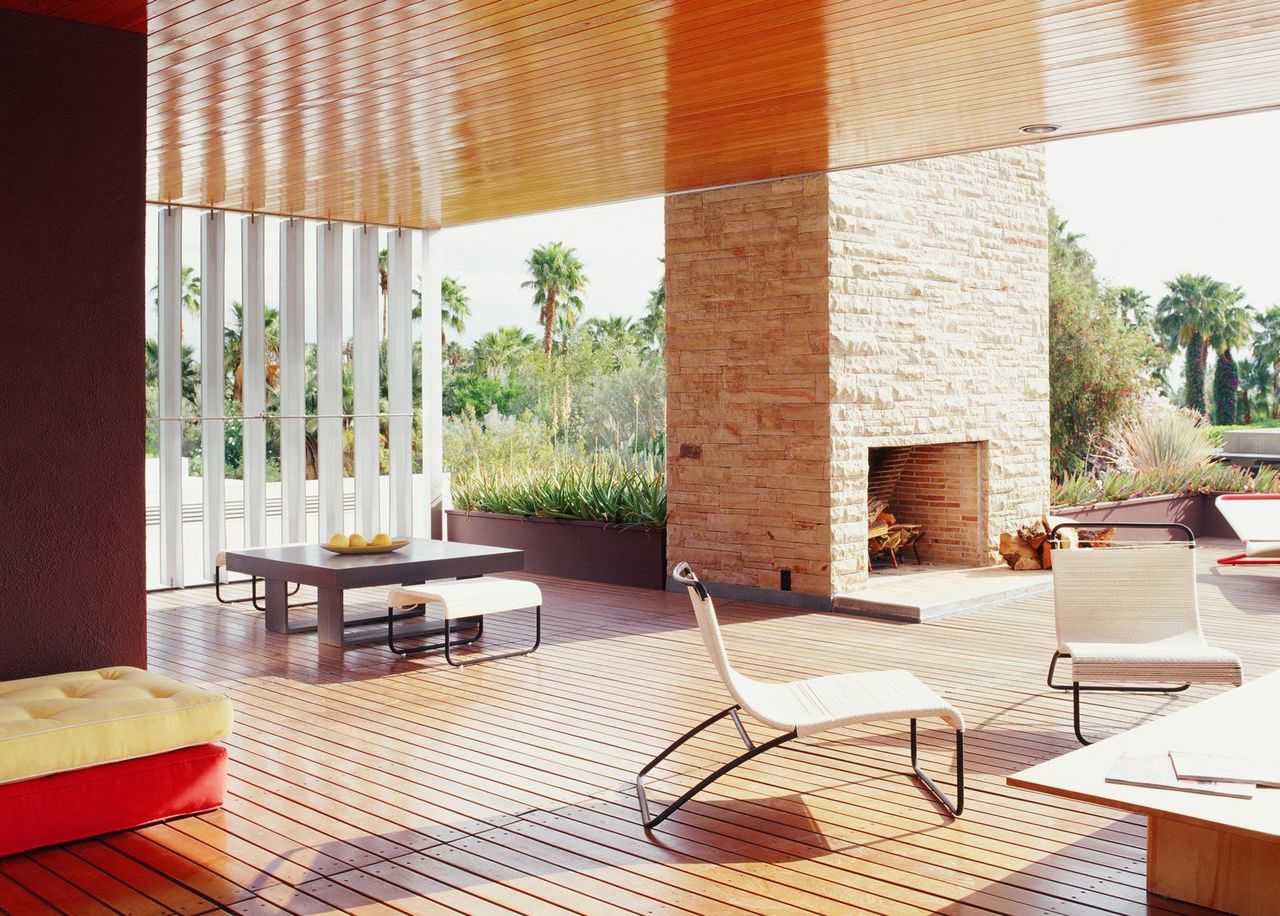 While a two-story structure did not meet the zoning code, Richard Neutra bypassed that via his design of a "gloriette," an outdoor room flanked by aluminum louvers, which were movable and selected for use due to strength. Steel was scarce at the time given the demand for it during the war, yet it did not stop Neutra. The panels-which are still original-shelter the home against the harsh desert elements.

About a decade before the home was designed, Kaufmann had commissioned another notable architect to design a home for him in Pennsylvania. The architect was Frank Lloyd Wright-and the project, Fallingwater. But unlike Frank Lloyd Wright, whose designs grow out of the landscape, Neutra’s designs descend upon it. The glass-and-steel home was, and still is, bold, given its harsh desert landscape-or as Neutra’s described it, the most uninhabitable site next to the moon. "It’s a bit of a stretch, but I definitely felt it several times with the temperature and special equipment needed to bring this about," says Harris. 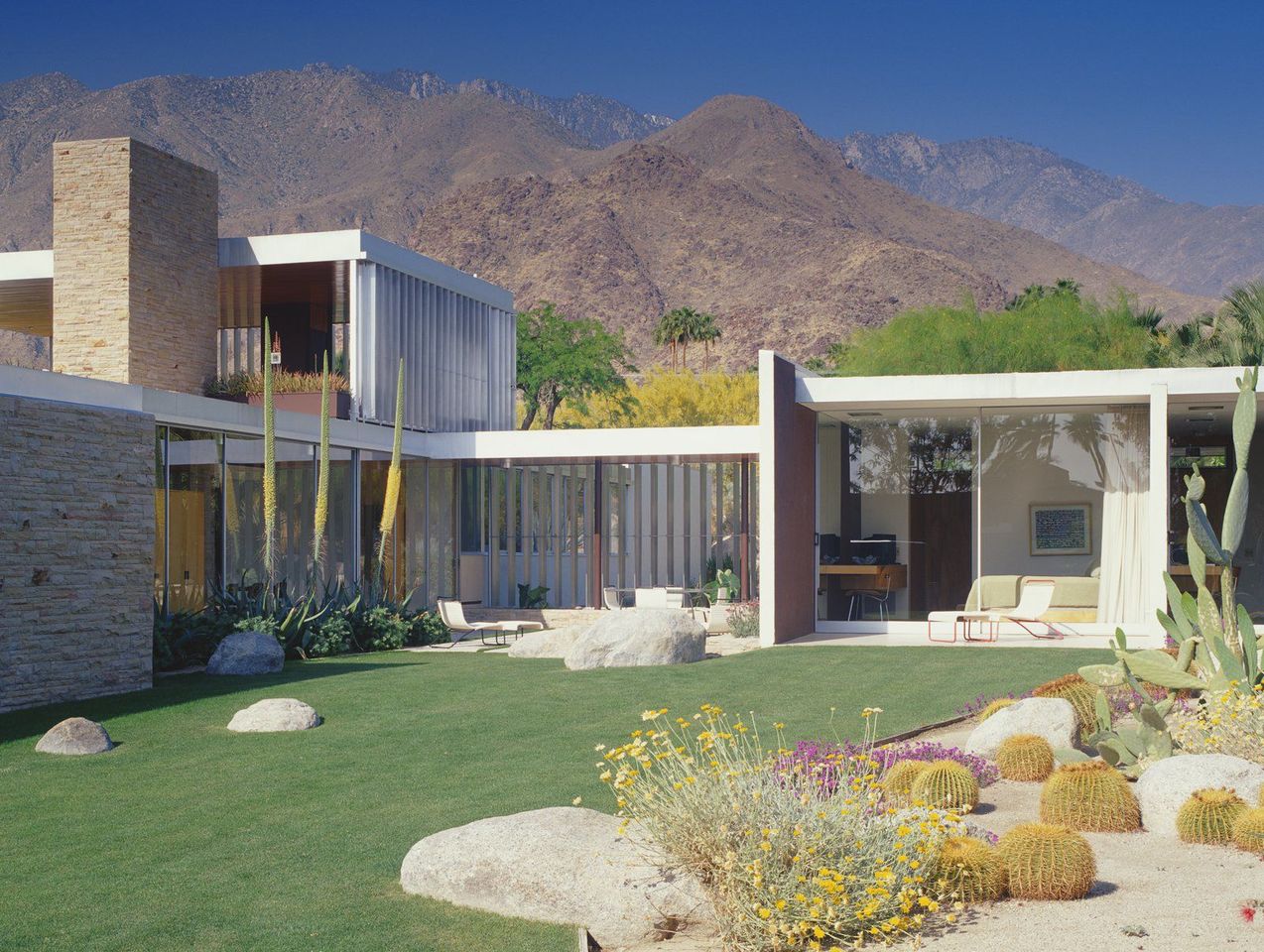 Neutra's Kaufmann home was initially designed for living just two months out of the year. Yet after the original owner passed, future tenants attempted to retrofit the space for year-long use. An air conditioning unit was placed atop the roof, and square footage was added, enclosing this courtyard. To return it to its original state, the current owner underwent a five-year restoration and reopened this courtyard to honor the original design.

The Kaufmanns only lived in the home some 60 days a year, and Neutra designed it as such. While the integration of radiant heating and cooling at that time made the home somewhat of a prototype, the home could not sustain long-term habitation without the intervention of air conditioning given the omnipresence of wood. It is one of just a few modern-day amenities that have been thoughtfully incorporated into the restoration. Ductwork was carefully inserted below ground. Return air can flow beneath a bed, and in the dining area ceiling, where wood meets plaster, an air return is cleverly concealed.

"We really were true to the original goals of Neutra," says Radziner. "And we tried to very authentically recreate and restore what wasn’t there and make it authentic as humanly possible." 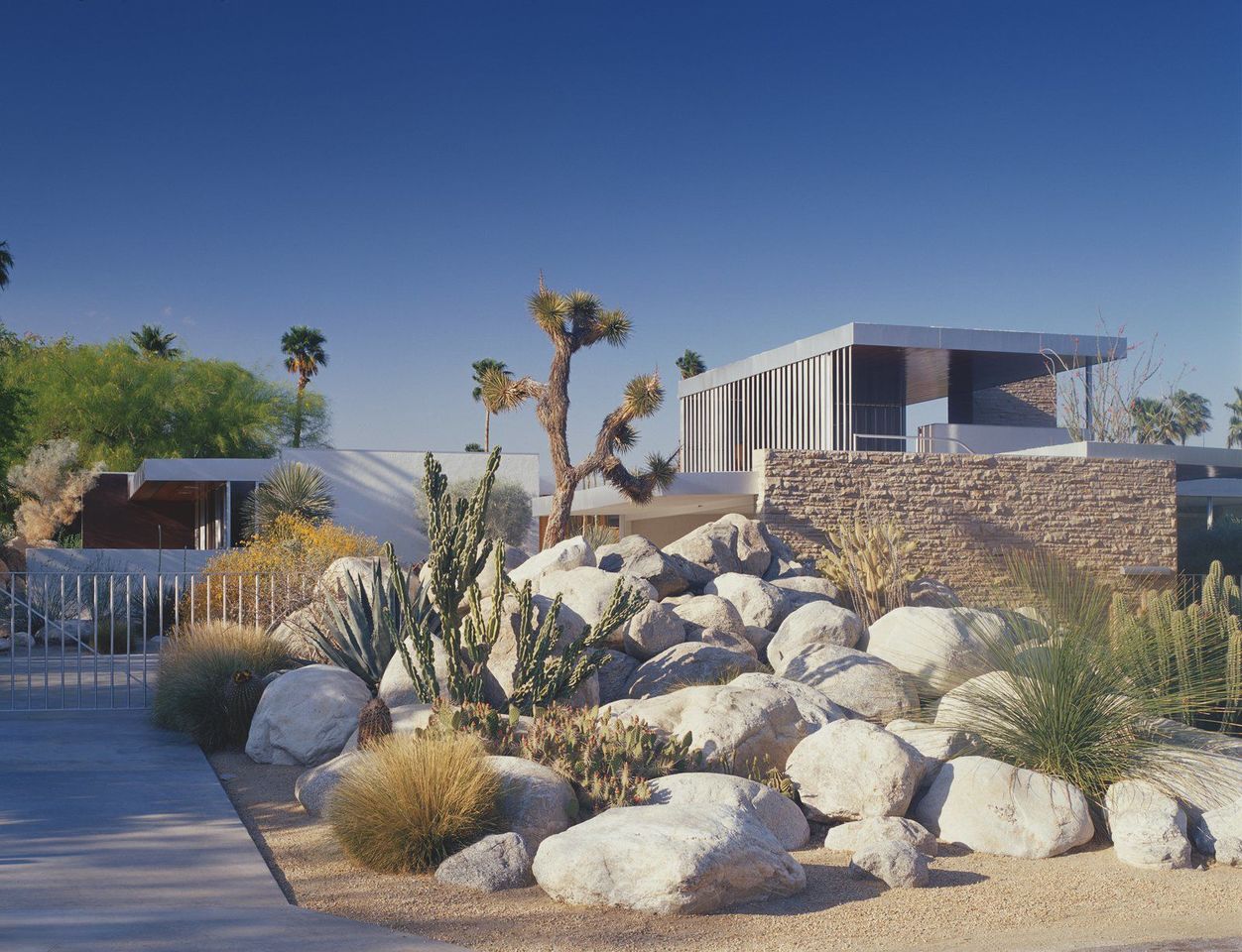 After much research, the original buff stone pictured was discovered at a quarry in Utah, a sunset shade unique to Richard Neutra's Kaufmann House. A mason worked there for a year and a half to accurately restore stone, chiseling and cutting blocks precisely in place to create a pleasing mosaic. Tops and bottoms of the stones were cut smooth to sit in horizontal position, allowing the sides and faces to be more organic as Richard Neutra intended.

The home is lauded in part because of Shulman’s work, but also because of its design, which has endured the test of time. Its pinwheel shape leaves the home without a backside, creating an organic orientation, photogenic from every angle.

"Its place in history as a home-a pristine, modern sculpture in the raw desert-is incredible," says Radziner. "As you walk around and experience it, it’s incredibly dynamic. The significance of this home in the fundamental sense is that it’s moving to people." 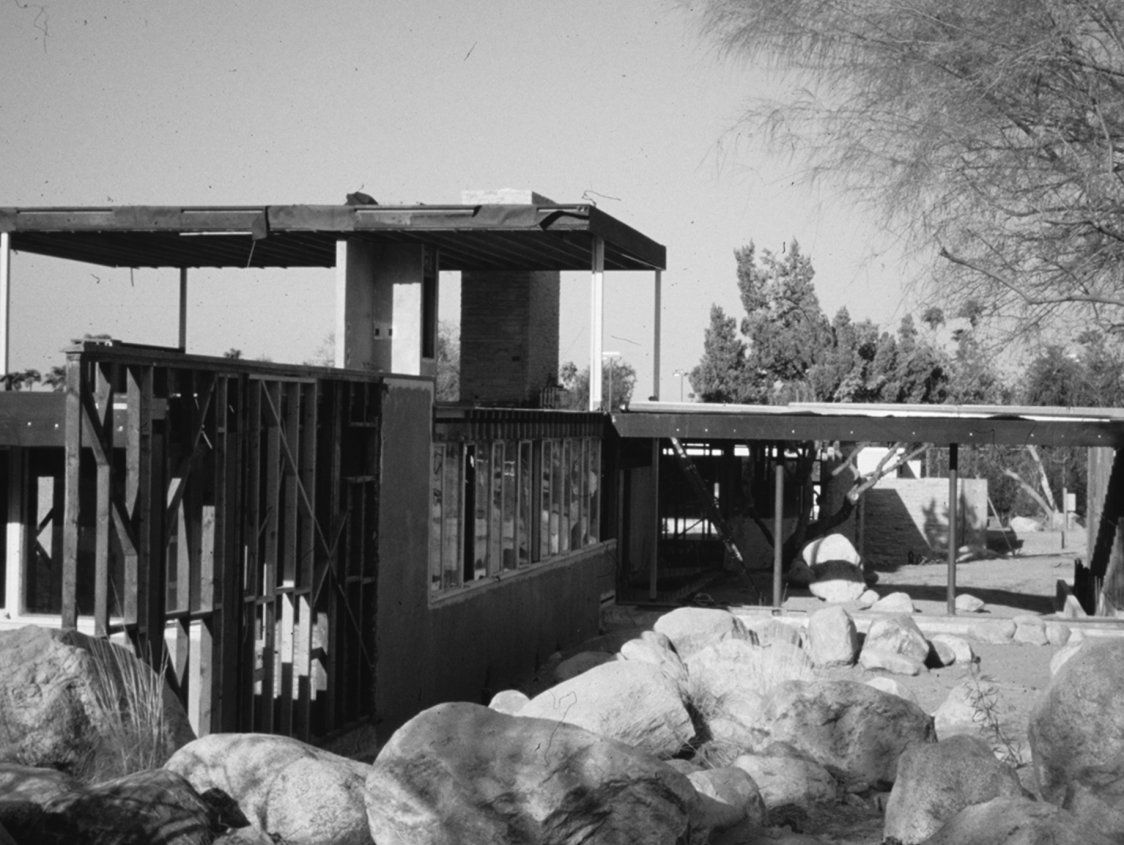 The restoration of Richard Neutra's Kaufmann house would take five years to complete.

The meticulous restoration included the sourcing of the original toilets and tables. The cutting-edge, movable and controllable steel louvers were recreated, serving both as privacy and sun screening for the top-floor, open-air "gloriette"-Neutra’s solution for zoning that restricts second stories. Subcontractors were given rigorous tests to evaluate not only their abilities, but also their interest in the project. And while a pool house was added to include amenities that accommodate modern-day lifestyles, it was designed to complement-never to compete-with the restored home, which has since been designated by the Palm Springs City Council as a Class 1 Historic Site, the most prestigious historic designation. Says Harris, "It pioneered the field for historic modern architecture."

Richard Neutra was a disruptor. He built what he described as a machine amidst a harsh desert landscape that defied all odds. And thanks to the team who respected its significance and dedicated so much of their lives to honoring the integrity of the design, it will endure-as good design does. Says Harris, "My favorite part is seeing it through other people’s eyes. Ultimately, I’m really happy that it has inspired people to restore modern houses." 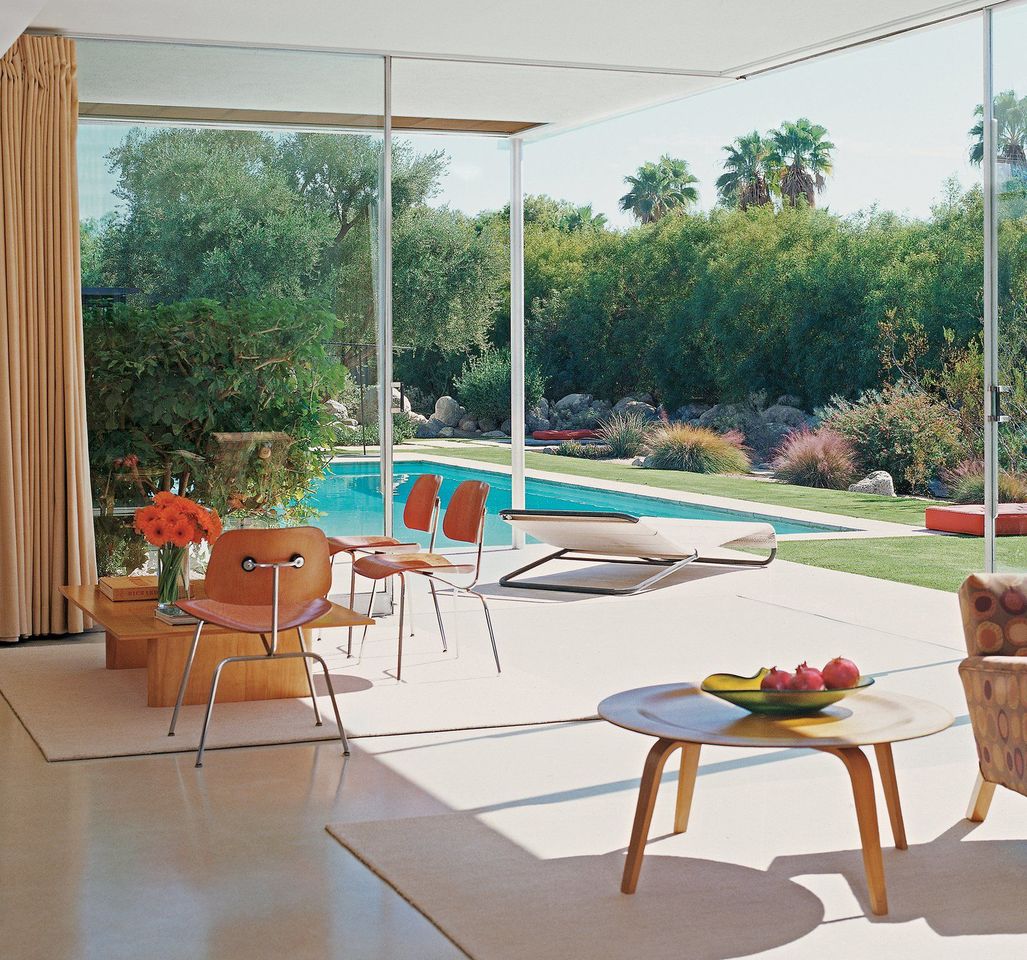 "The home has an unusual resonance when you see it," says Kaufmann house owner Brent Harris. "It has a volumetric, spatial beauty that changes throughout the day, particularly at twilight. There are a lot of great Neutra houses, but this has different feel entirely. It's very photogenic." 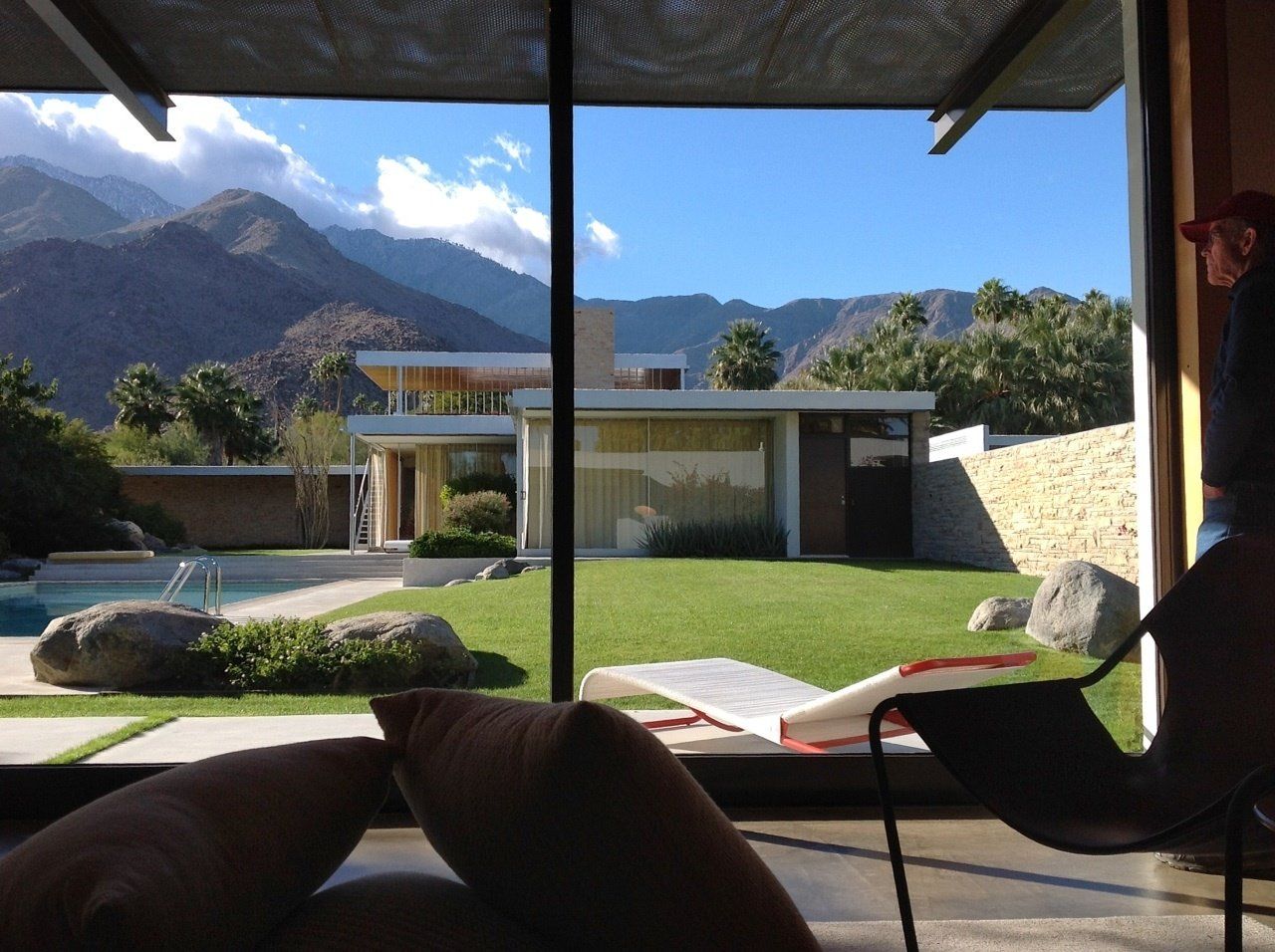 Few changes to Richard Neutra's original design were made during the restoration of the Kaufmann house, including the addition of this pool house to better accommodate modern-day life. It was designed to complement-never to compete with-the restored home, which has since been designated by the Palm Springs City Council as a Class 1 Historic Site, the most prestigious historic designation. Says owner Brent Harris, "It pioneered the field for historic modern architecture."