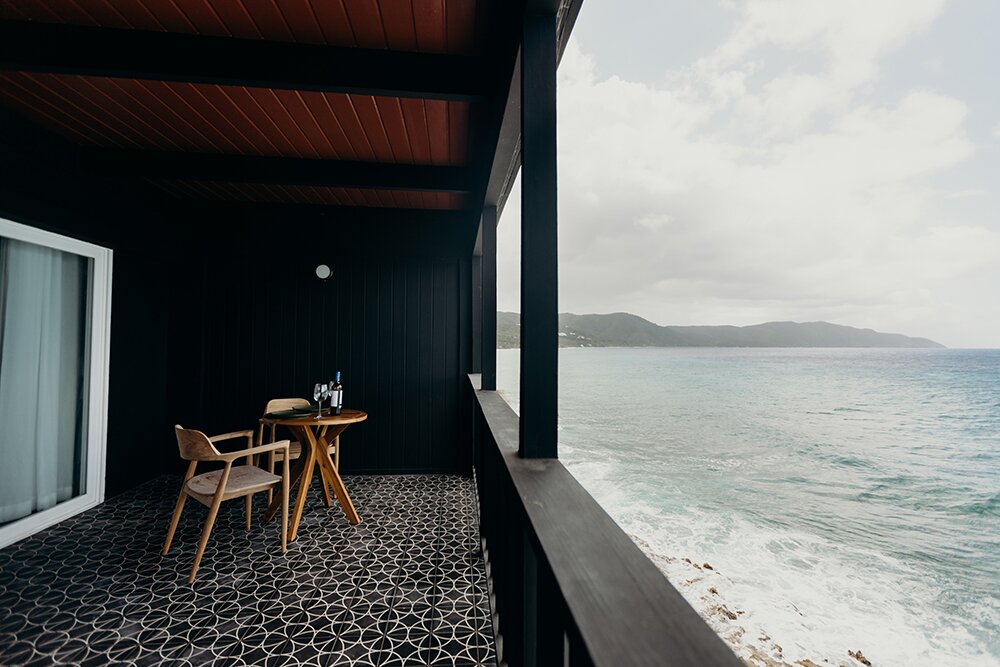 The founder of Chris Pardo Design creates a midcentury retreat in St. Croix-nearly three decades after becoming enamored with the coastal property as a young child.

For designer and hotelier Chris Pardo, island life has been a dream since childhood. At 12 years old, he became fascinated with the idea of living on a petite body of land surrounded by waves and tropical vegetation. But even at a young age, "island life" meant more to Pardo than white-sand beaches and aquamarine seas. It represented an alternative lifestyle filled with bustling culture, music, and endless sunshine-the latter of which was a major draw for the vitamin D–deprived sun-lover from the Pacific Northwest. 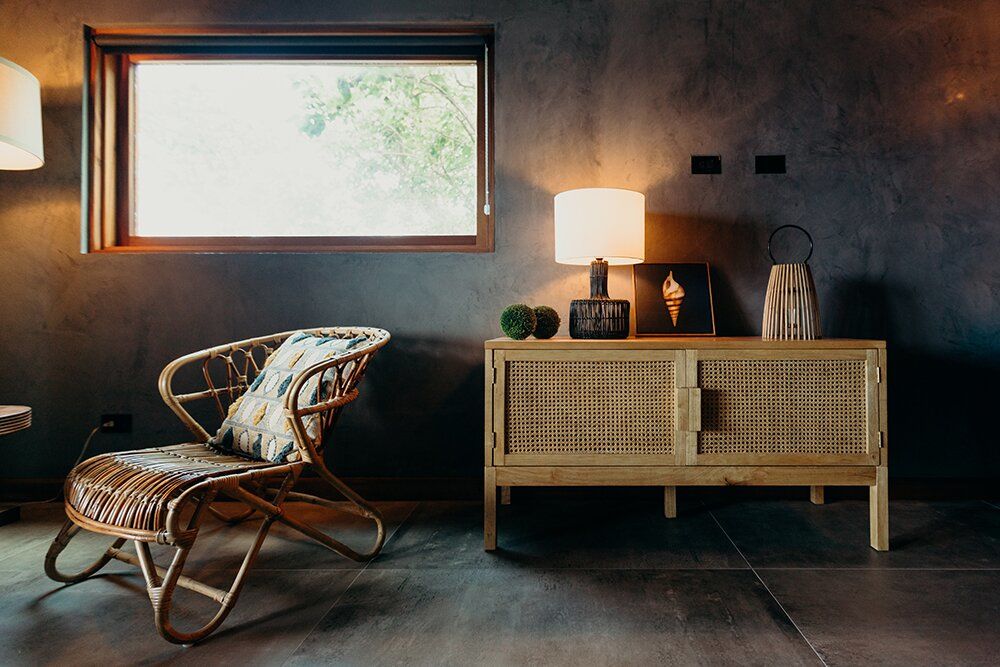 The interiors are swathed in organic hues to allow the surrounding Caribbean landscape to shine.

To satisfy his interest, Pardo’s father recommended that he subscribe to real estate pamphlets by mail. Soon after, Pardo came across a hotel that caught his eye in St. Croix of the U.S. Virgin Islands. He wrote a three-page business plan with "lots of decorative borders" that included a general description of the U.S. Virgin Islands, an excerpted paragraph from a St. Croix travel book, a cut-and-pasted image of the hotel, and a rudimentary budget. And so began Pardo’s 30-year journey of making the hotel his own. 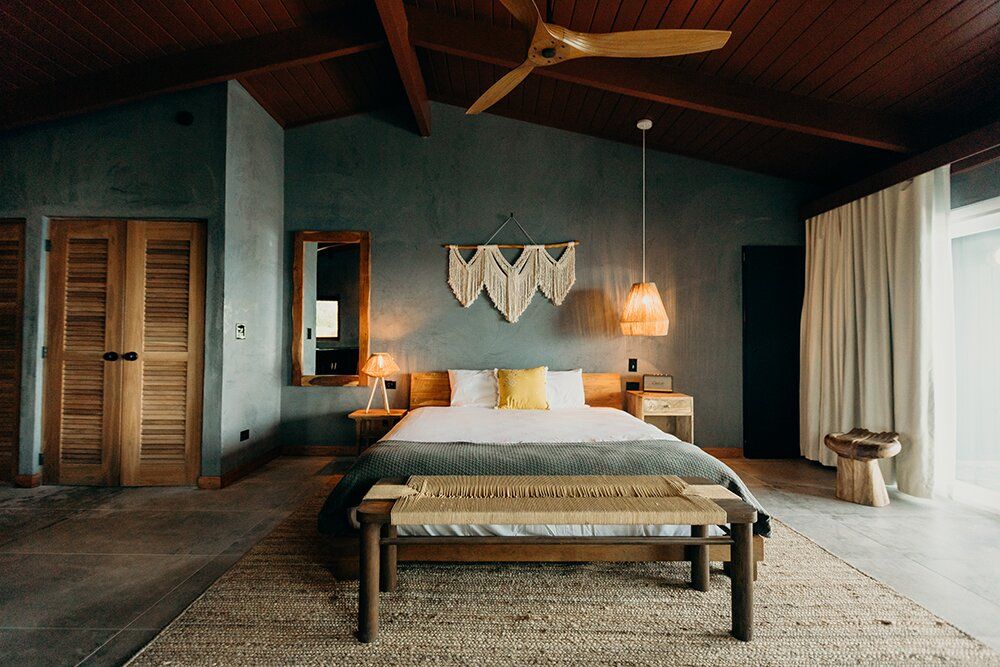 The hotel bedrooms are outfitted with rustic furnishings and woven decor.

"I was captivated by [’80s] movies like Club Paradise and Water, and the book Don’t Stop the Carnival by Herman Wouk," explains Pardo. "I loved the history, culture, and musical influences of the Caribbean as a whole, and I also had an interest in French Polynesia. The idea of living in a tropical climate, listening to reggae or calypso, and running a little hotel sounded very appealing to me-even at that age," he continues. 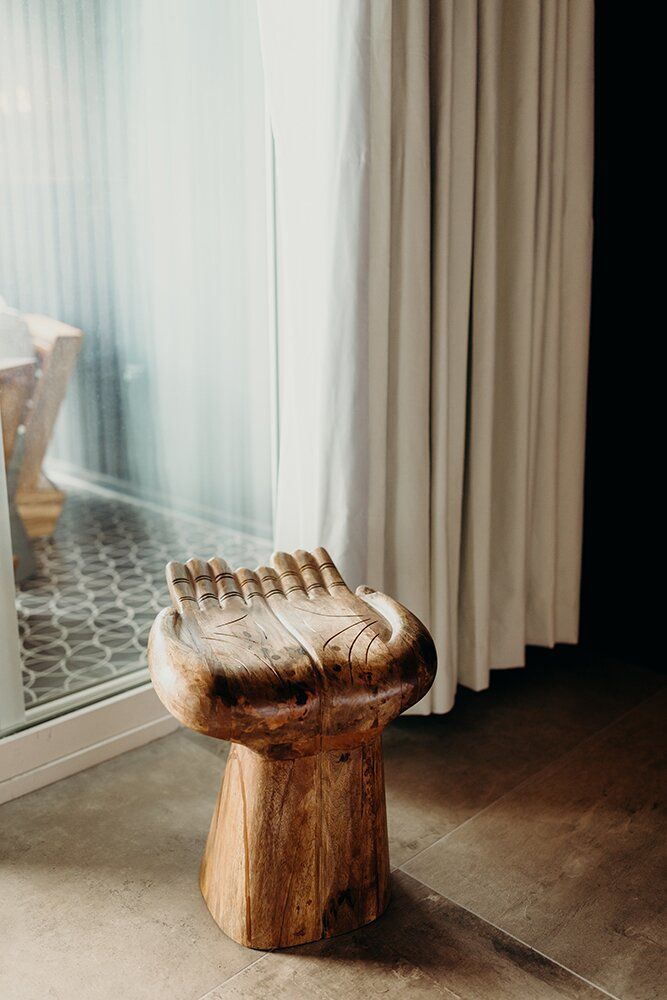 Designer and hotelier Chris Pardo was inspired by movies such as Club Paradise (1986) and Water (1985), as well as the book Don’t Stop the Carnival by Herman Wouk (Doubleday, 1964).

Luckily, Pardo had the proper foundation and mindset to accomplish his goal. With a father who worked as a general manager at a lumber and logging company (and had a personal passion for looking at real estate), and two parents who built the home he grew up in, it’s no wonder Pardo developed an eye for design. He went on to receive an undergraduate degree in hotel management and completed an accredited M.Arch program. 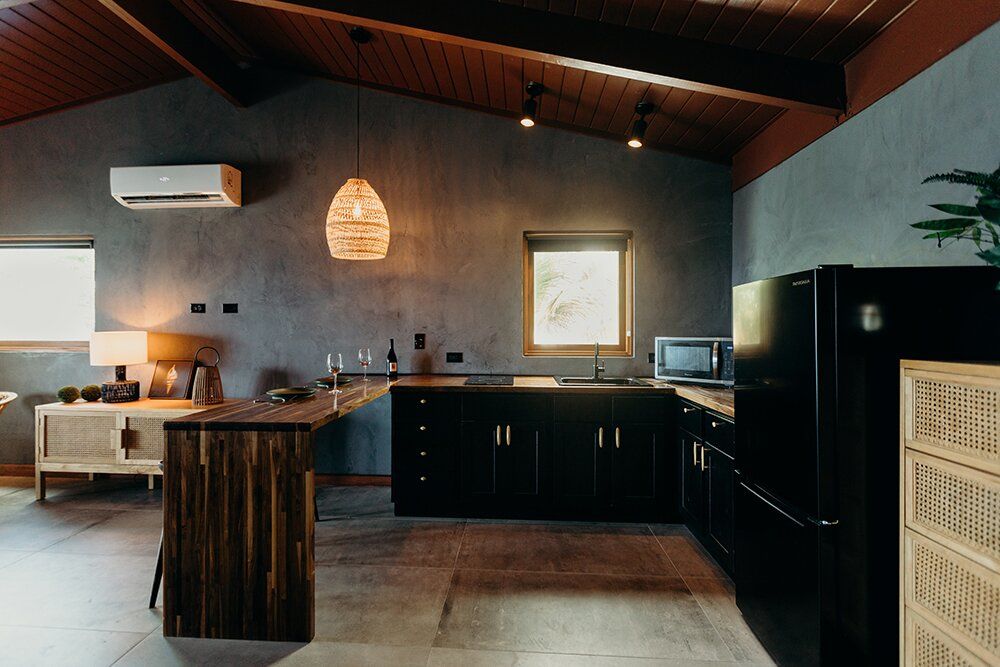 Various suites feature remodeled kitchenettes, which were opened up from traditional peninsulas to include floating bars with seating.

Before Pardo turned 30, he established an eponymous architecture and design firm and also launched the U.S.-based Arrive Hotels. All the while, Pardo was "stalking" the St. Croix hotel he wanted, becoming familiar with the property and even staying there as a guest periodically over the last 20 years. In 2018, Pardo was finally able to purchase the hotel along with another property-the Waves at Cane Bay, which was originally built in 1956 on the site of a dynamited grotto. 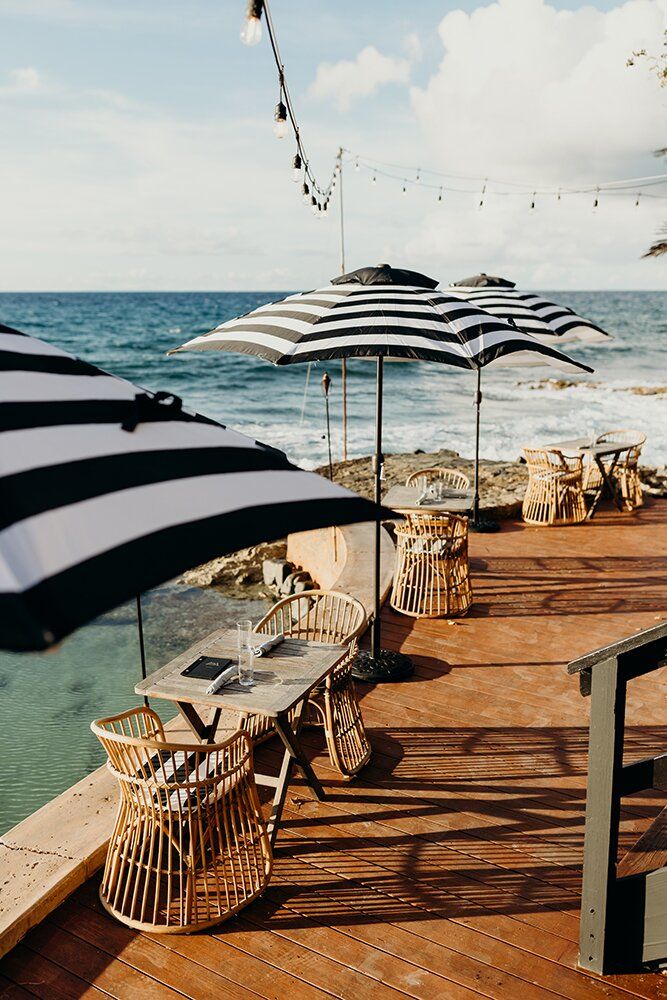 Oceanside patio seating makes for an ideal space to enjoy a seafood dish or a craft cocktail.

Despite having briefly stayed in the hotel rooms during previous trips, this was the first time Pardo was able to evaluate the structure, which unfolded in what he describes as a "pretty organic" process. Building in paradise, however, came with its challenges, which Pardo says were constant. The construction team would sometimes run out of water, lose power, or not be able to find the material they needed. "It was a quick and harsh learning curve," Pardo says. The property now contains eleven suites, two bars, and a sustainable seafood restaurant. While the Waves at Cane Bay renovation was completed in March 2021, the designer and hotelier says he is "still working on the larger remodel." 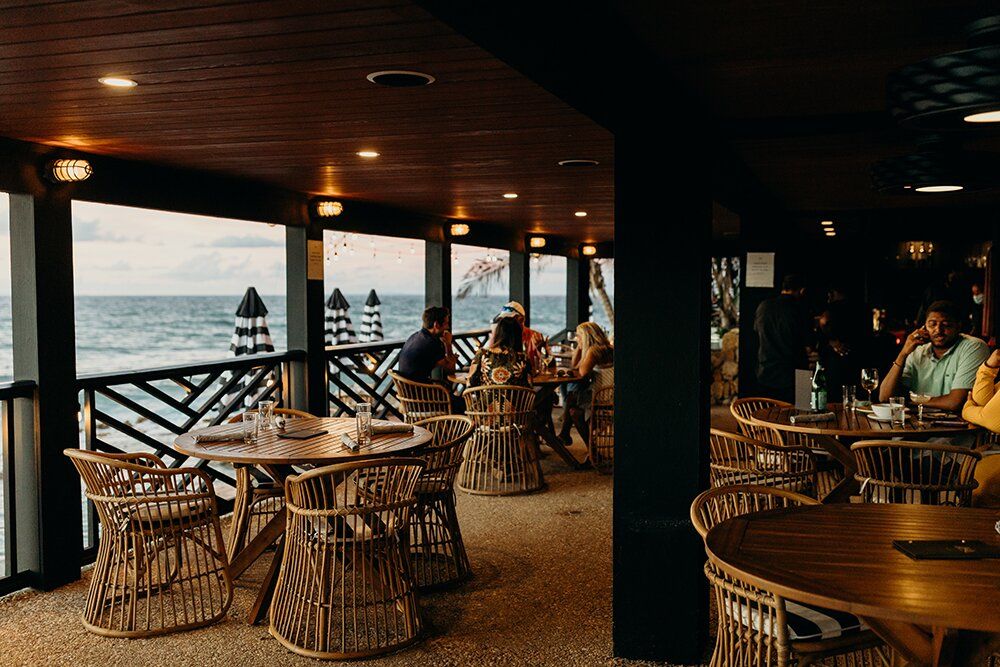 "I wanted the hotel to be a respite from full days out in the sun," says Pardo, who describes the scenic destination as a place where travelers can spend their days lounging on the beach, or swimming, snorkeling, and scuba diving amid coral reefs. The concept was to hone in on the hotel’s surrounding environment, using soft and soothing natural tones to permeate the spaces and accentuate the natural beauty of the landscape. The exterior, too, was designed to fade into the background—but there were elements of the space that Pardo wanted to maintain, paying homage to the previous incarnation. "There was a breathtaking draw from the grotto and natural stone walls," Pardo says. "By choosing black for the building’s body, we were able to really accentuate the stonework." The existing hotel-which was reminiscent of a standard beach house with tiled floors and practical furnishings-included various additions from throughout the years, such as solid louver windows, arches, railings, and trellises. Outside the restaurant, a neutral palette unfolds from the seating to the stone floors.

"The first course of action was to strip down the buildings and relieve them of these added components, allowing the structure of the building to be perceived," Pardo says. "One of the largest impacts, in my opinion, was the addition of the mahogany windows, which replaced the old solid louvers. For the first time, guests can fully enjoy the beauty and natural light." A spacious deck with geometric tiles opens up from the guest rooms and overlooks the ocean.

The updated property’s overall style takes on one of Pardo’s favorites-midcentury-with various spaces that incorporate textured walls and mood lighting throughout. "To me, midcentury really illustrates a harmonious balance between form and function," Pardo explains. "The principles of natural light, open spaces, and an indoor/outdoor connection are timeless."

Now, the Waves at Cane Bay takes on a welcoming demeanor with rustic wood furnishings, woven decor, and bamboo and lattice accents. The boutique hotel exudes the air of a place that you’d stumble upon while strolling the beach and be so smitten by the sustainable seafood, craft cocktails, and contemporary decor that you’d decide to stay the night to do it all again. 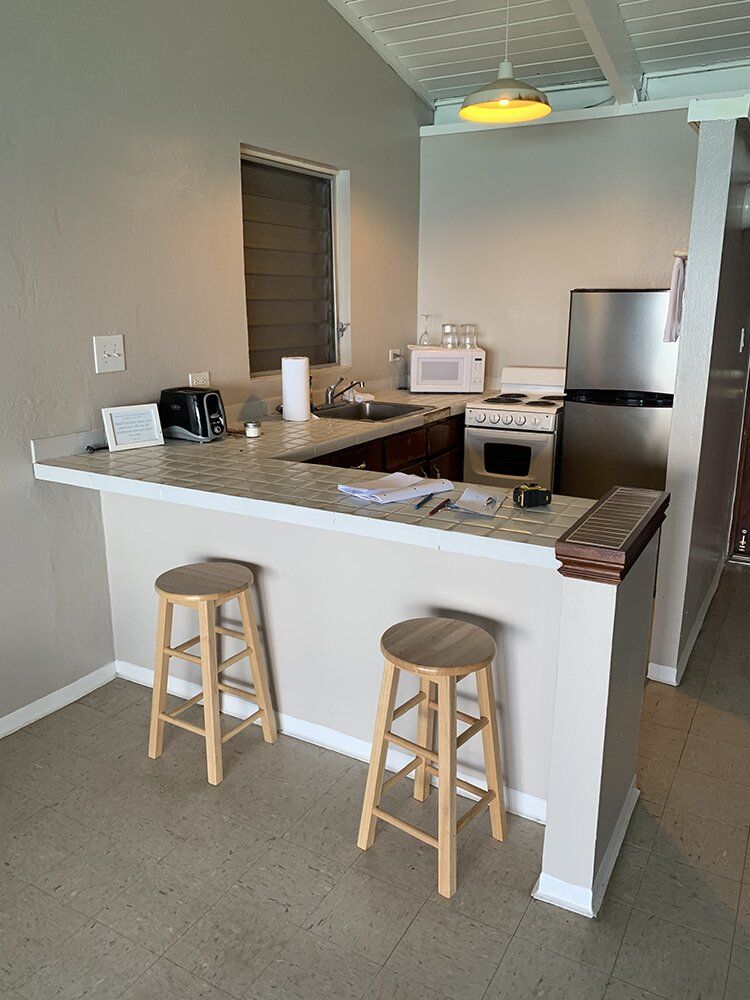 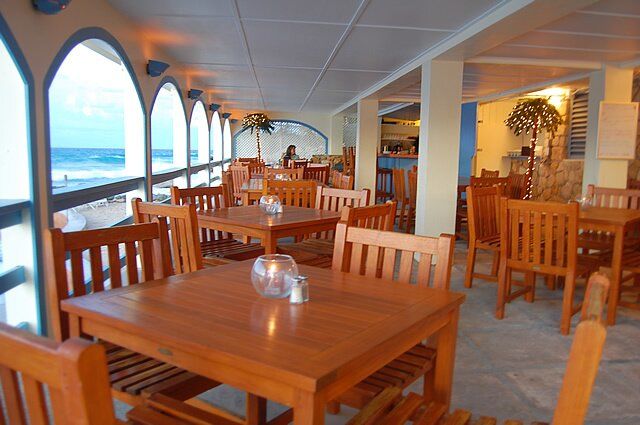 Before the remodel, the dining area exhibited an entirely different feel with arched windows painted in shades of pale yellow and blue.