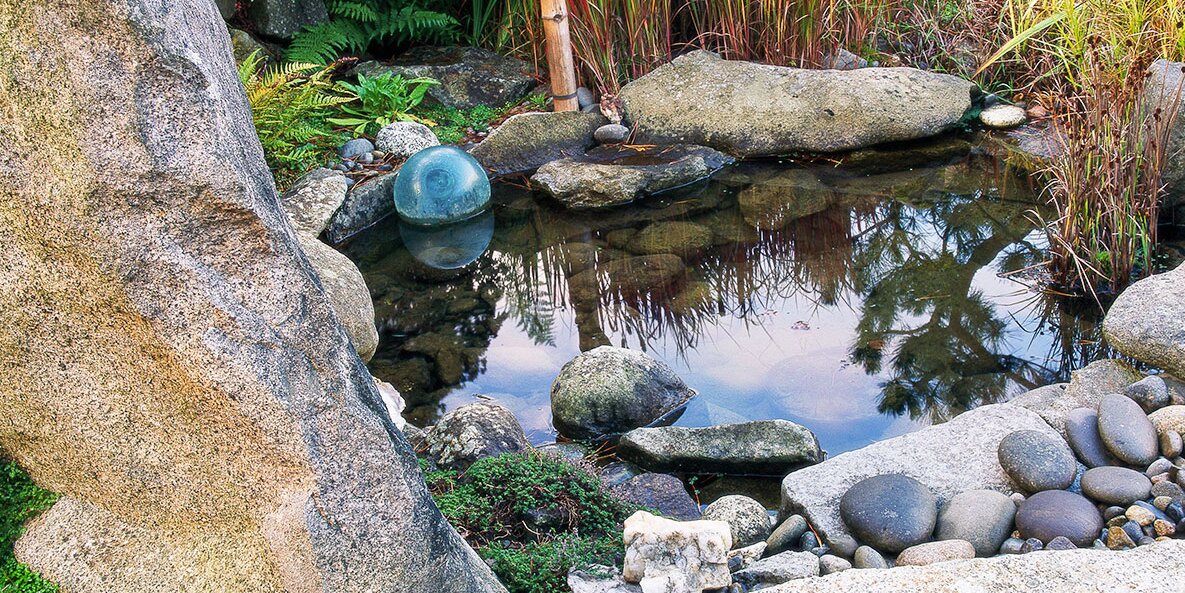 Each product we feature has been independently selected and reviewed by our editorial team. If you make a purchase using the links included, we may earn commission.

Drawing from Buddhist, Shinto, and Taoist philosophies, Japanese garden design principles strive to inspire peaceful contemplation. They often combine the basic elements of plants, water, and rocks with simple, clean lines to create a tranquil retreat. You can borrow inspiration from the Japanese garden aesthetic to bring a little Zen to your landscape. Use a simple bamboo fence to block views of the world outside your garden and make the entrance clear with a gate and attractive arbor. You can even try growing bamboo plants yourself, which are among the fastest-growing plants in the world. Go for a clumping type, which grows from a central root ball and is less aggressive than other types. 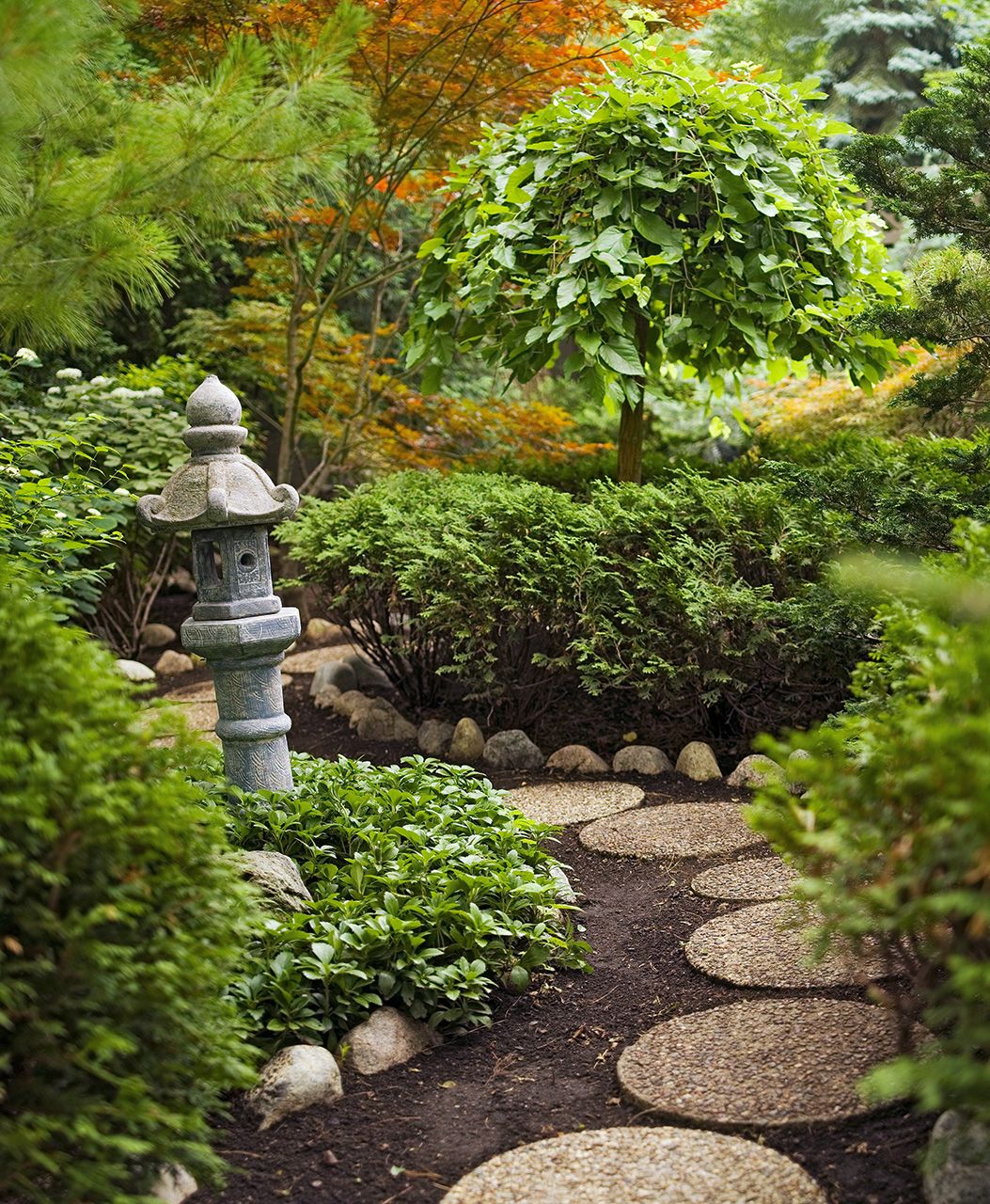 A key element in Japanese garden style is creating vignettes that can't be viewed all at once. Here, a winding path leads your eye past the stone pagoda and invites you to speculate what's around the next corner. Japanese gardens often rely on subtle differences in color and texture. Here, conifers provide soothing shades of green for year-round interest. Some echo the pyramidal form of the pagoda while others frame the feature with their low, spreading branches. Moss makes a serene-looking groundcover in moist, shady areas. Because moss doesn't tolerate foot traffic well, place a stepping stone walkway among the moss to allow passage without damaging its soft surface. If you can’t grow moss in your space, use another type of groundcover plant. 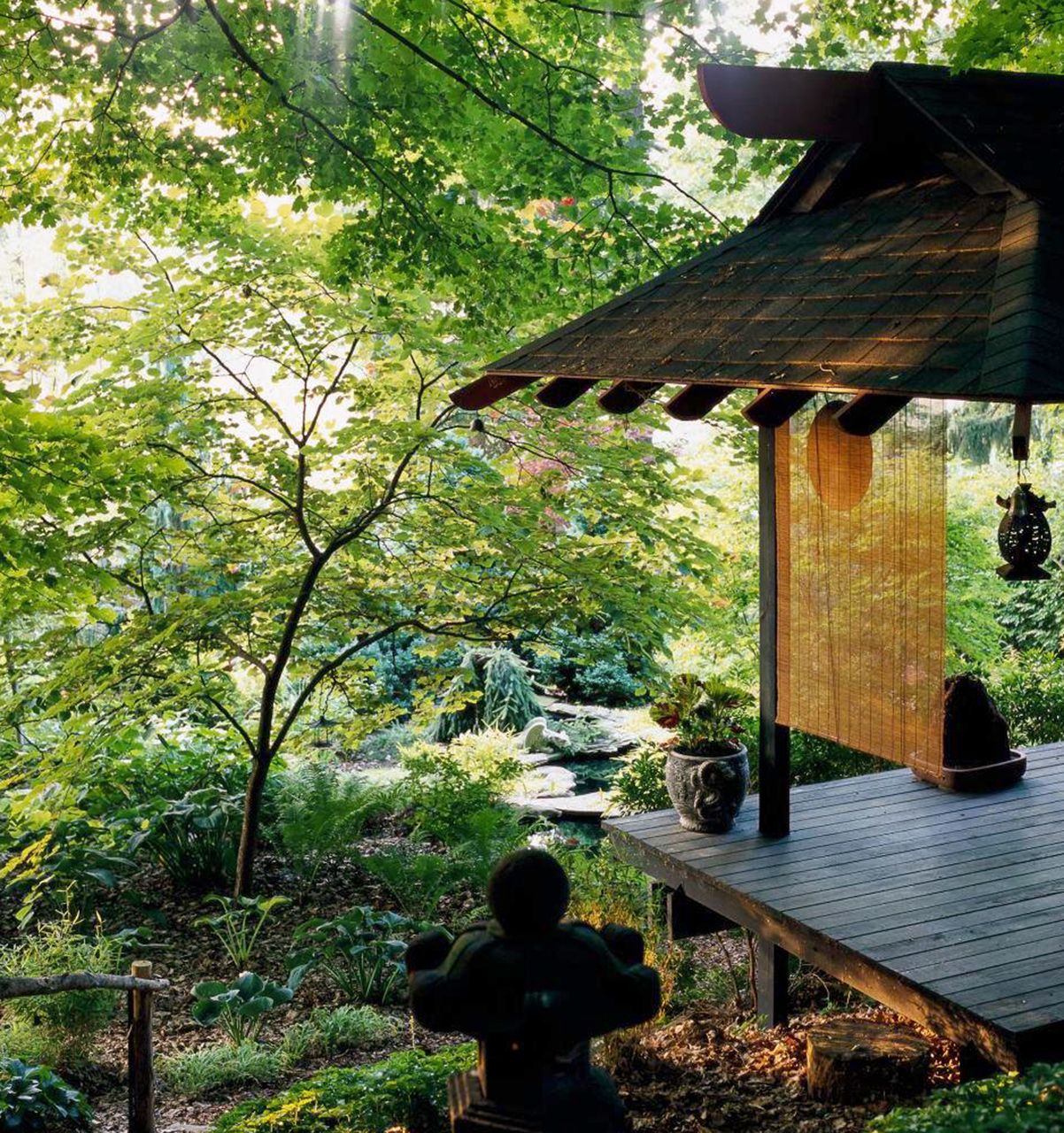 Create an intimate space in your Japanese garden with a teahouse or pavilion made of bamboo or wood. Use the structure for entertaining or for viewing the serene landscape. Stone lanterns shaped as pagodas work well to bring some Japanese style to a small garden; they hold a lot of character without taking up a ton of space. They can also echo the roofline of a teahouse or covered gate entries in addition to providing a charming glow in the evening. 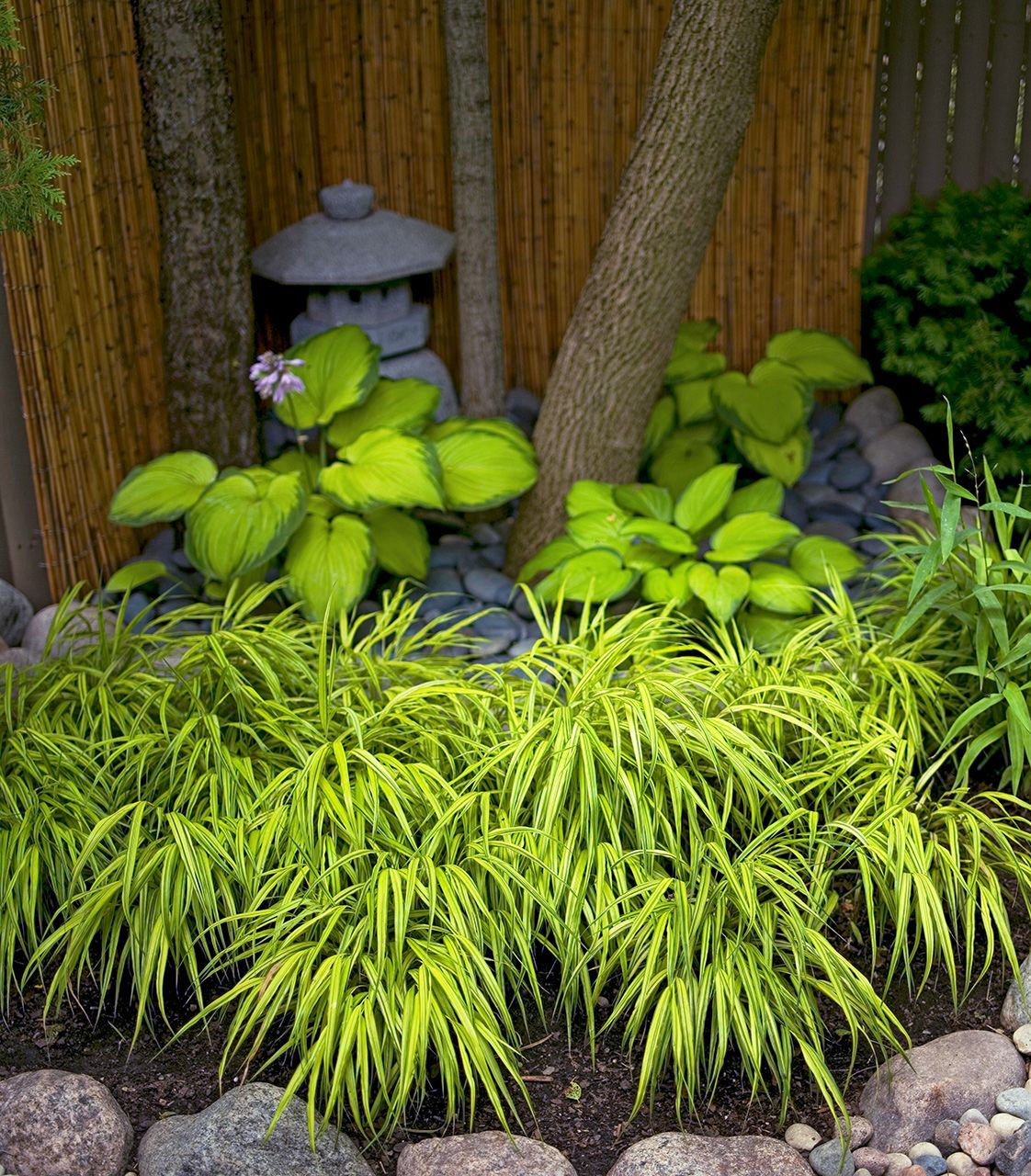 Shaded sections of the Japanese garden rely on subtle color contrast and bold textural differences to create interest. Here, chartreuse and green hostas surround the base of a tree while variegated Hakone grass softens the edge of the bed. 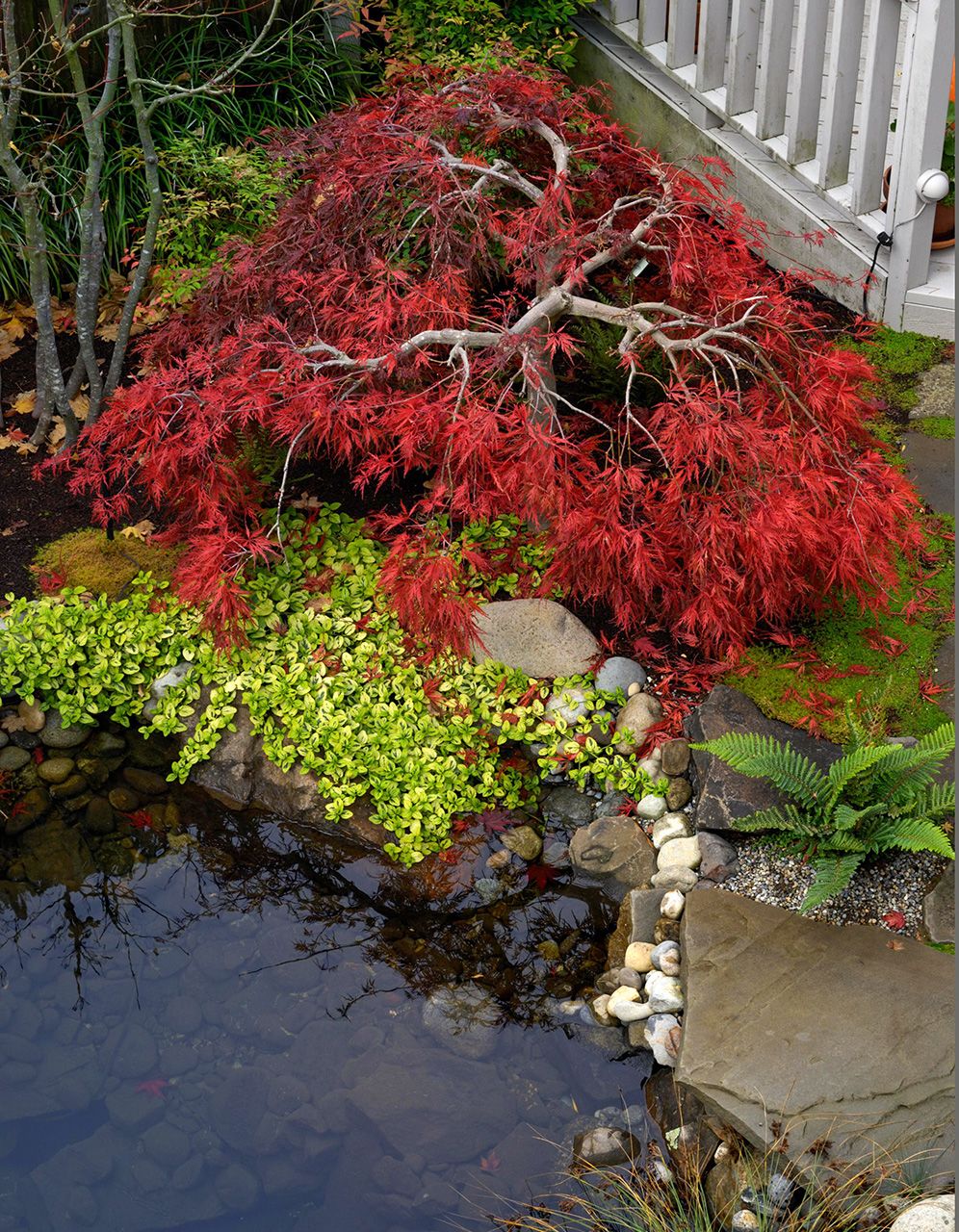 Trees in Japanese garden design are usually pruned into shapes that reveal their architectural form. This Japanese maple has an intriguing zigzag branching pattern. Arching branches reach over the contrasting groundcover and reflect in a nearby pool of water. Protect Yourself from Evil Spirits 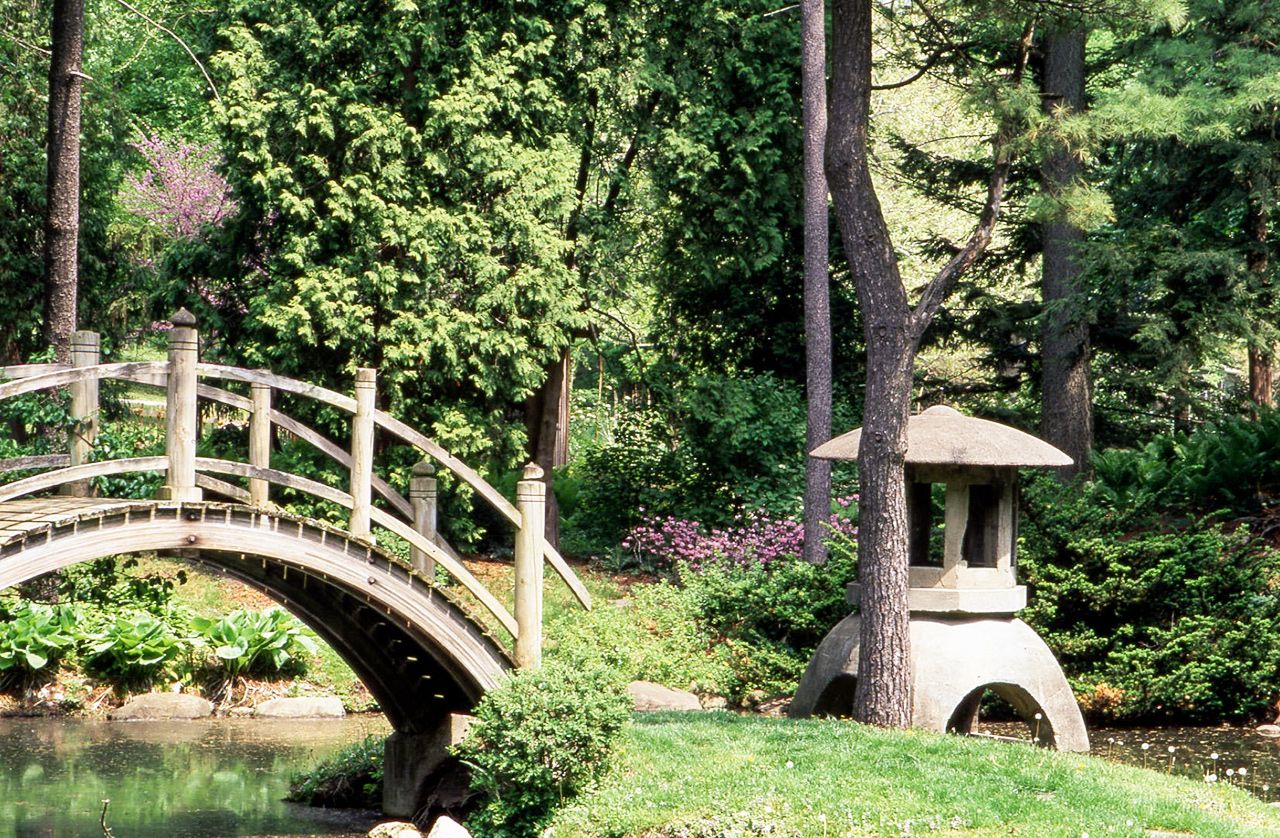 A small island in the middle of this pond creates the illusion of a secluded Japanese garden retreat, even though it is not really meant for visiting. With a larger space and longer span on the bridge, you could create a more accessible island.