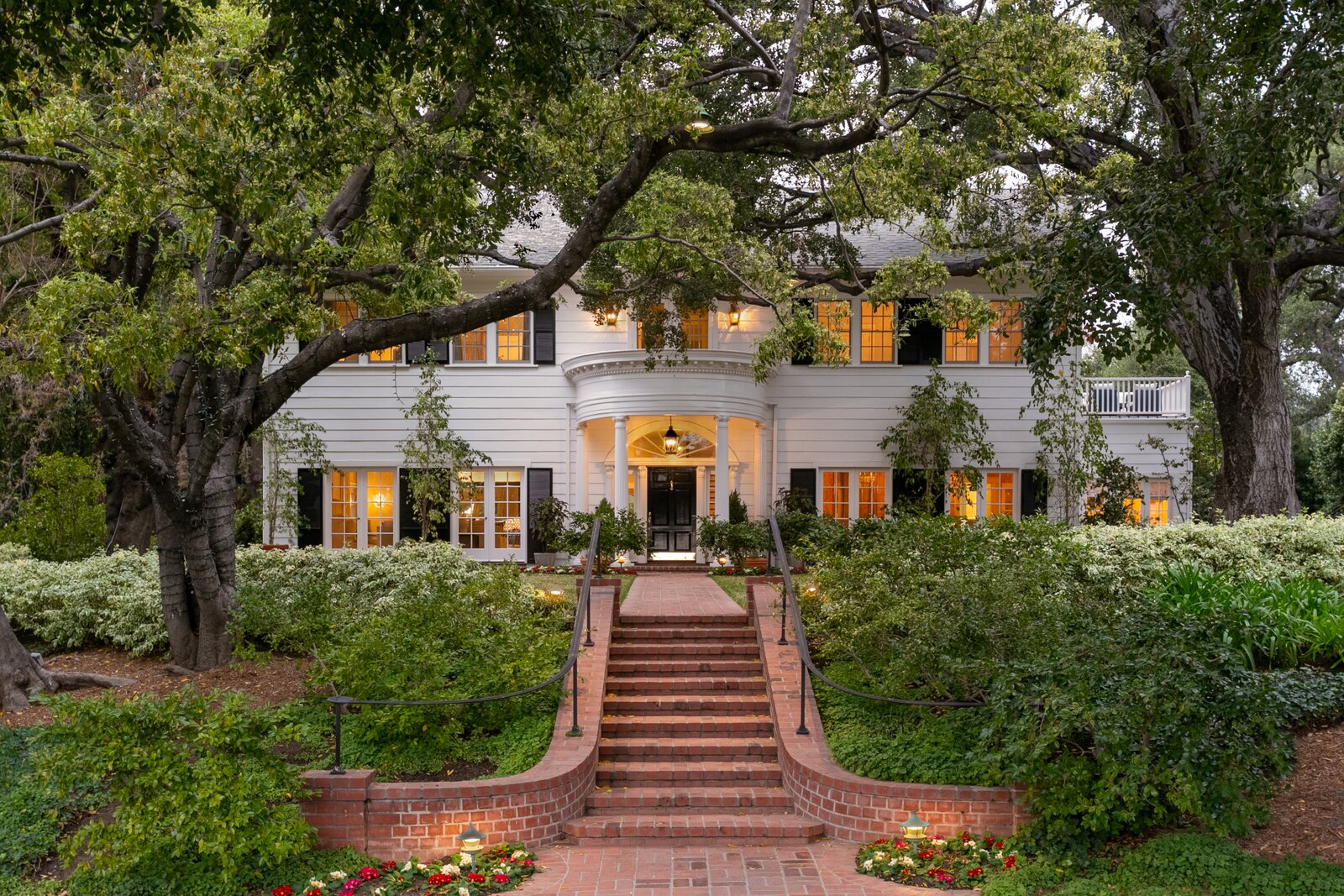 Calling all fans of The Office: The opulent estate that appeared on NBC’s beloved series as the residence of David Wallace, played by actor Andy Buckley, is now up for grabs. Due to its immense popularity, however, the distinguished six-bedroom, six-bathroom home in Pasadena, California, will cost the lucky buyer much more than its original $5,995,000 price. 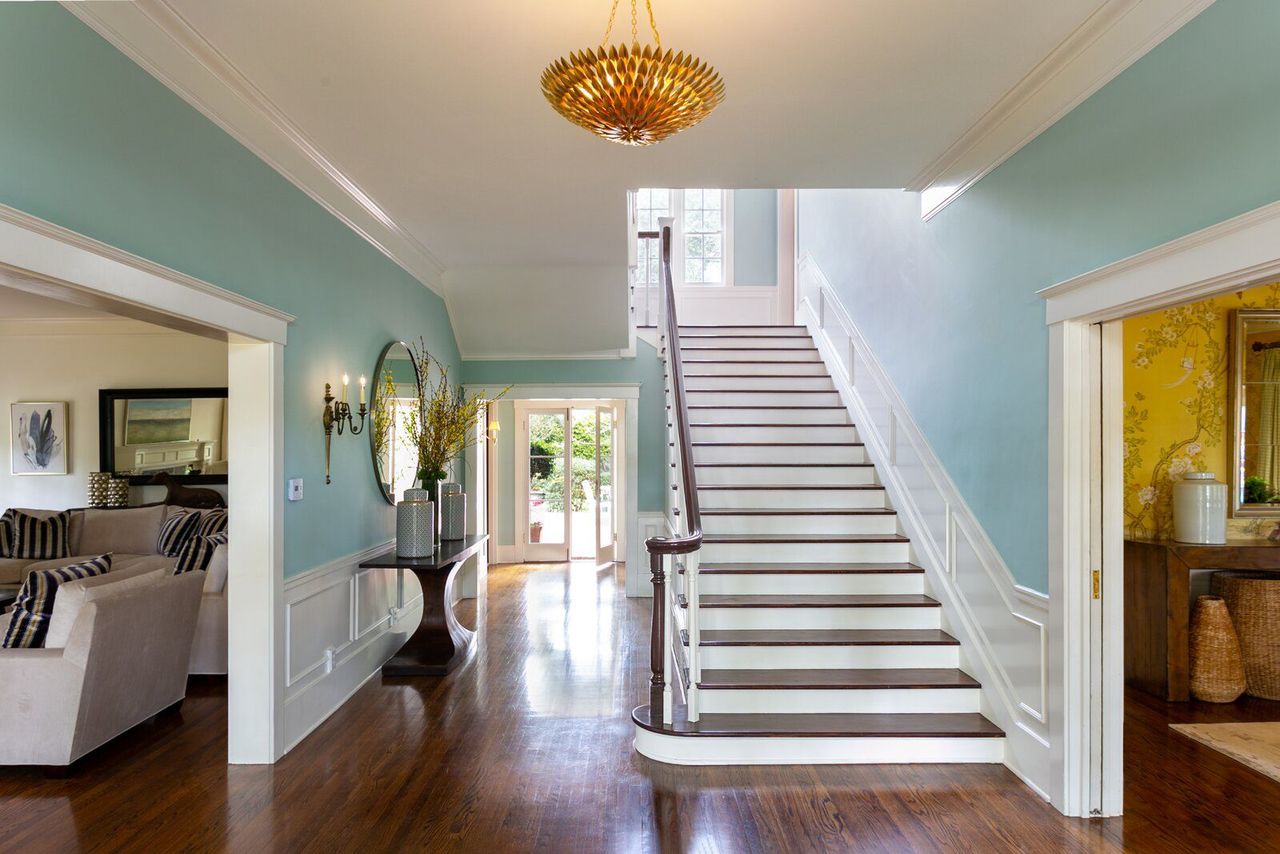 The 1920s estate in Pasadena, California, was originally designed by Lucille W. Luckhardt and built by Lee S. Davis. According to historical records, the property cost $16,000 to build, which is approximately four times the cost of an average tract house during that time. Here is a peek at the main foyer, which opens up to the large gathering rooms in the main residence.

The 6,301-square-foot property-designed in 1925 by architect Lucille W. Luckhardt-spans almost an entire acre on Pasadena’s quiet, residential Lomita Drive. The expansive estate includes a two-floor main residence and a guesthouse, as well as numerous outdoor gathering areas, a pool and spa, and a three-car executive garage. The distinguished home is now in escrow with multiple offers above its original asking price, listing broker George Penner recently told the New York Post. Custom, built-in shelving spans a wall in one of the living spaces, which offers plenty of storage for residents—as well as a small, informal work station. The light-filled chef’s kitchen features an abundance of counter space and all-new appliances.

The main residence’s grand foyer is flanked by formal living and dining rooms, all of which feature tall French doors that open to the property’s surrounding manicured lawns. Down the hall, a large and airy chef’s kitchen awaits near an adjoining lounge area. There is also a well-equipped butler’s pantry and bar, plus a separate breakfast room, a powder room, and a wood-paneled library with a fireplace. 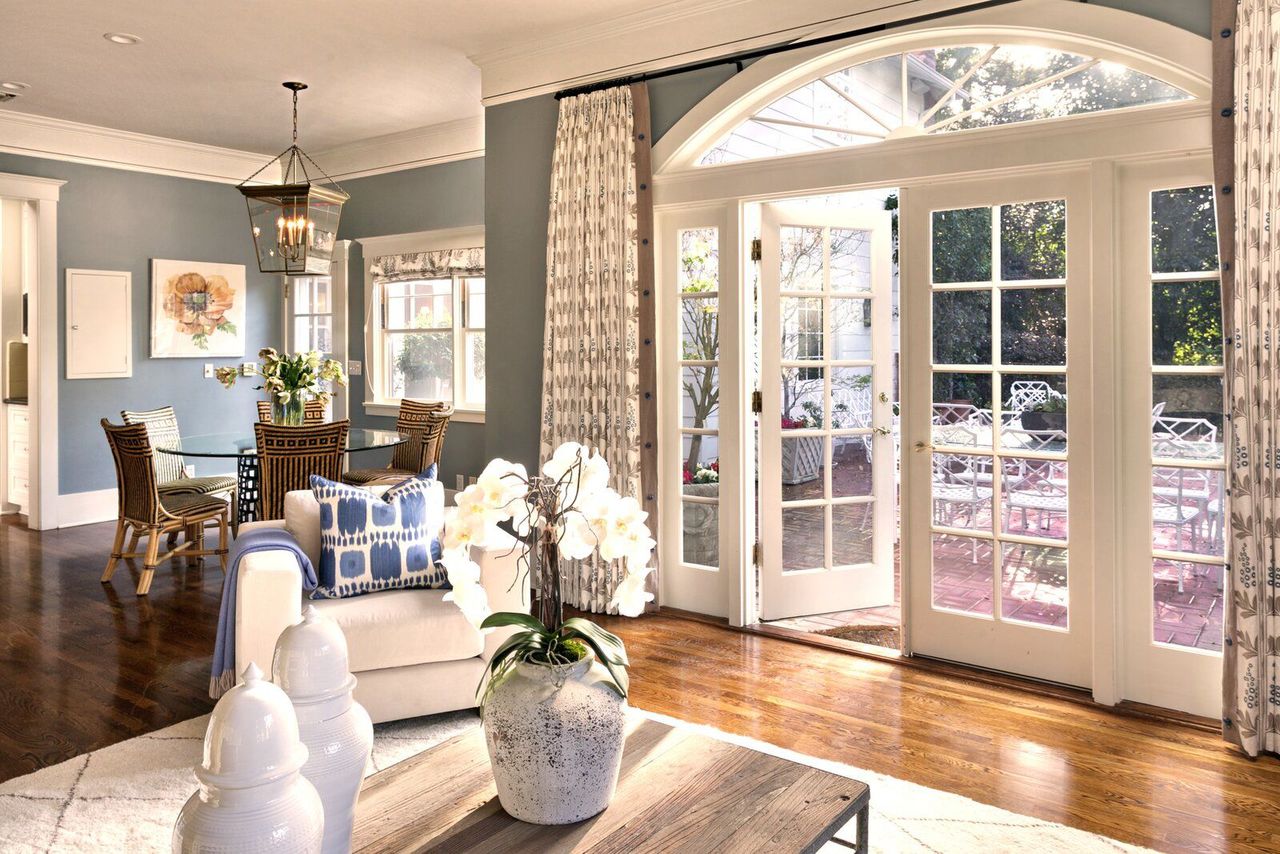 Glass French doors in the living room allow for easy access to the adjacent brick patio, which helps to create a seamless indoor/outdoor flow in the home. The dining room, which is cloaked with wallpaper by de Gournay Chinoiserie, also offers direct access to the home’s outdoor areas.

Throughout the home, ornate finishes give each living space a distinguished touch, from custom cabinetry and millwork in the kitchen and lounge areas to bright wallpaper on the dining room walls. A grand staircase leads to the principal wing, which comes with two walk-in closets and a spa-like bathroom. A wood-clad office on the upper level features a balcony that overlooks the sprawling grounds, which are planted with oak, pine, and citrus trees. 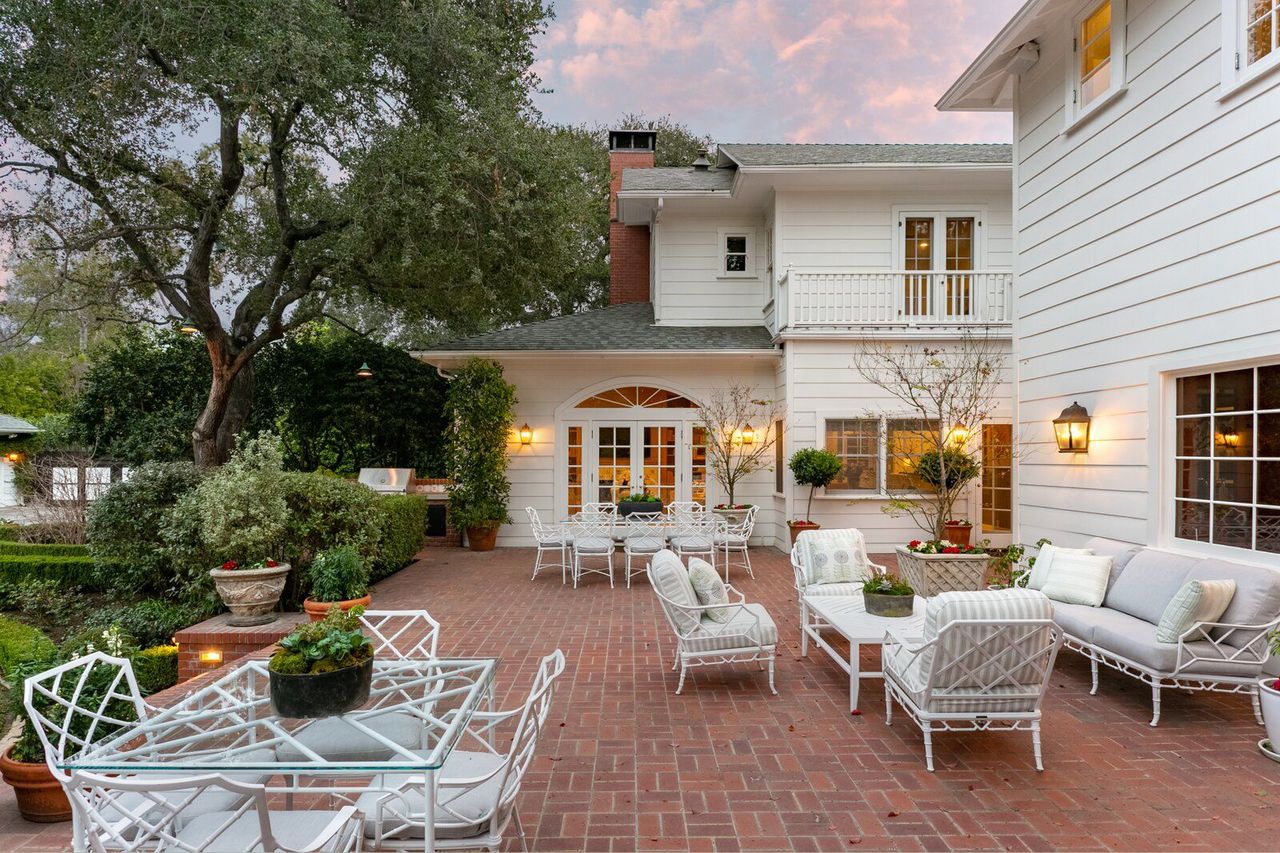 Numerous entertainment areas surround the home’s exterior, including furnished patios, a pavilion with an outdoor fireplace, and a large pool with a built-in spa. A detached guesthouse on the estate grounds also offers plenty of privacy. Scroll ahead to see more of the property, which is currently on the market-until one lucky bidder finally gets the keys. 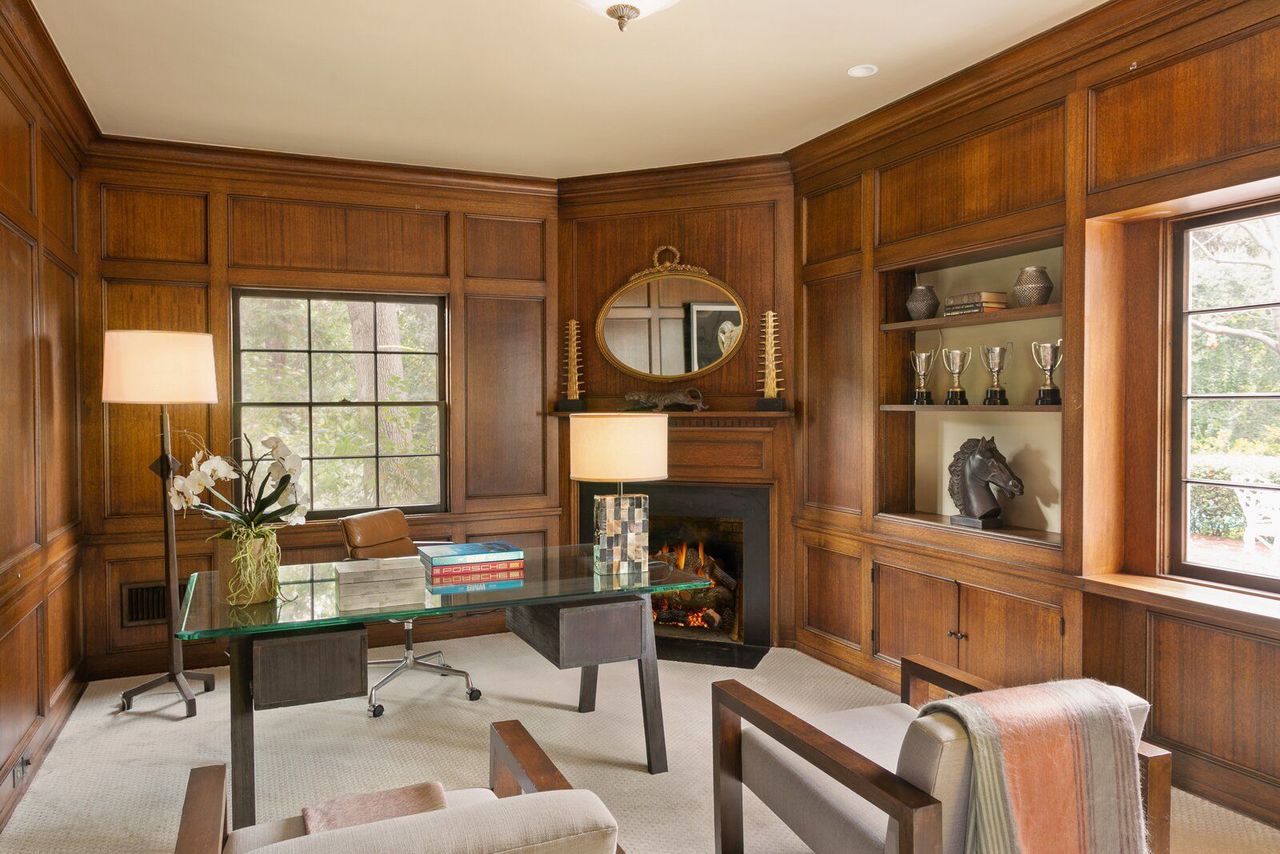 In addition to the first-floor library, the home also features a wood-clad office on the upper level. 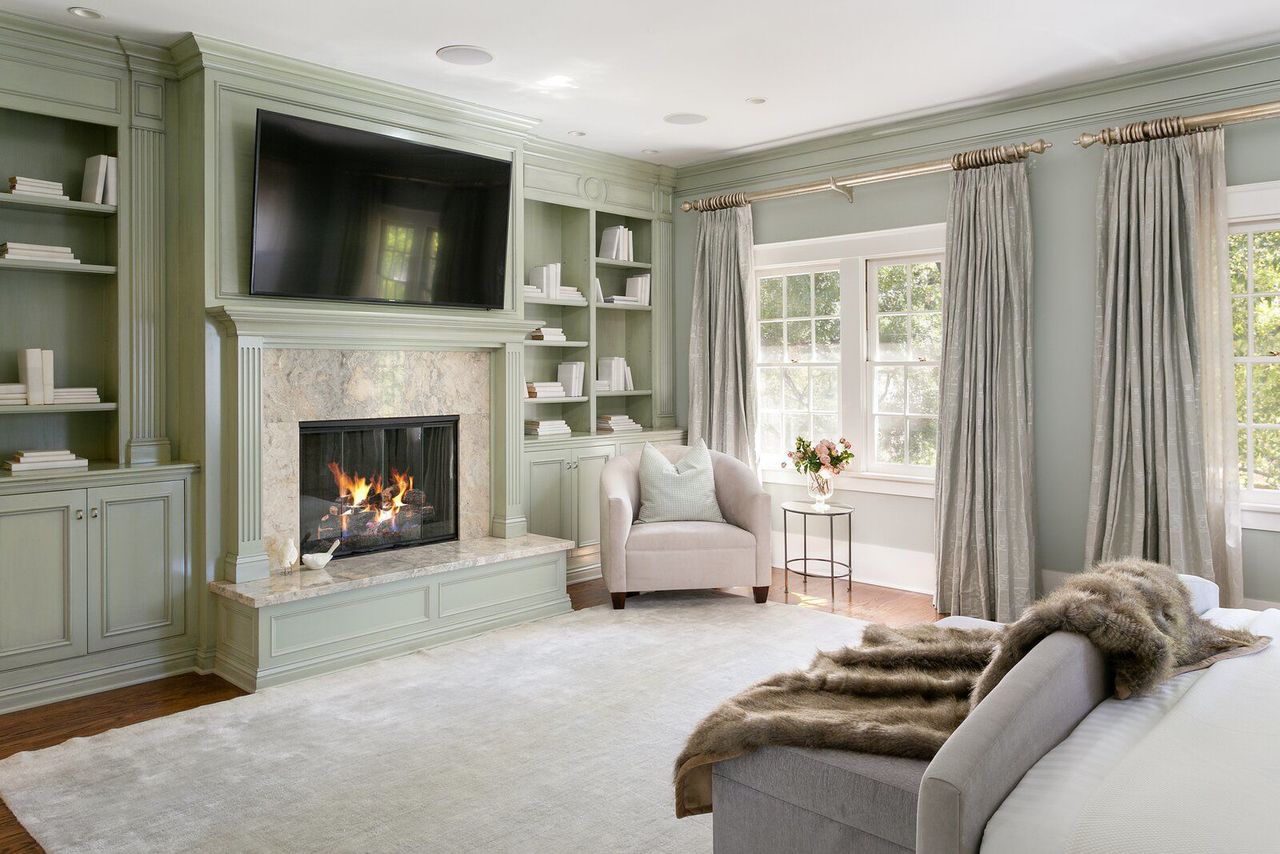 The spacious principal suite is painted in a soothing, light-green hue. 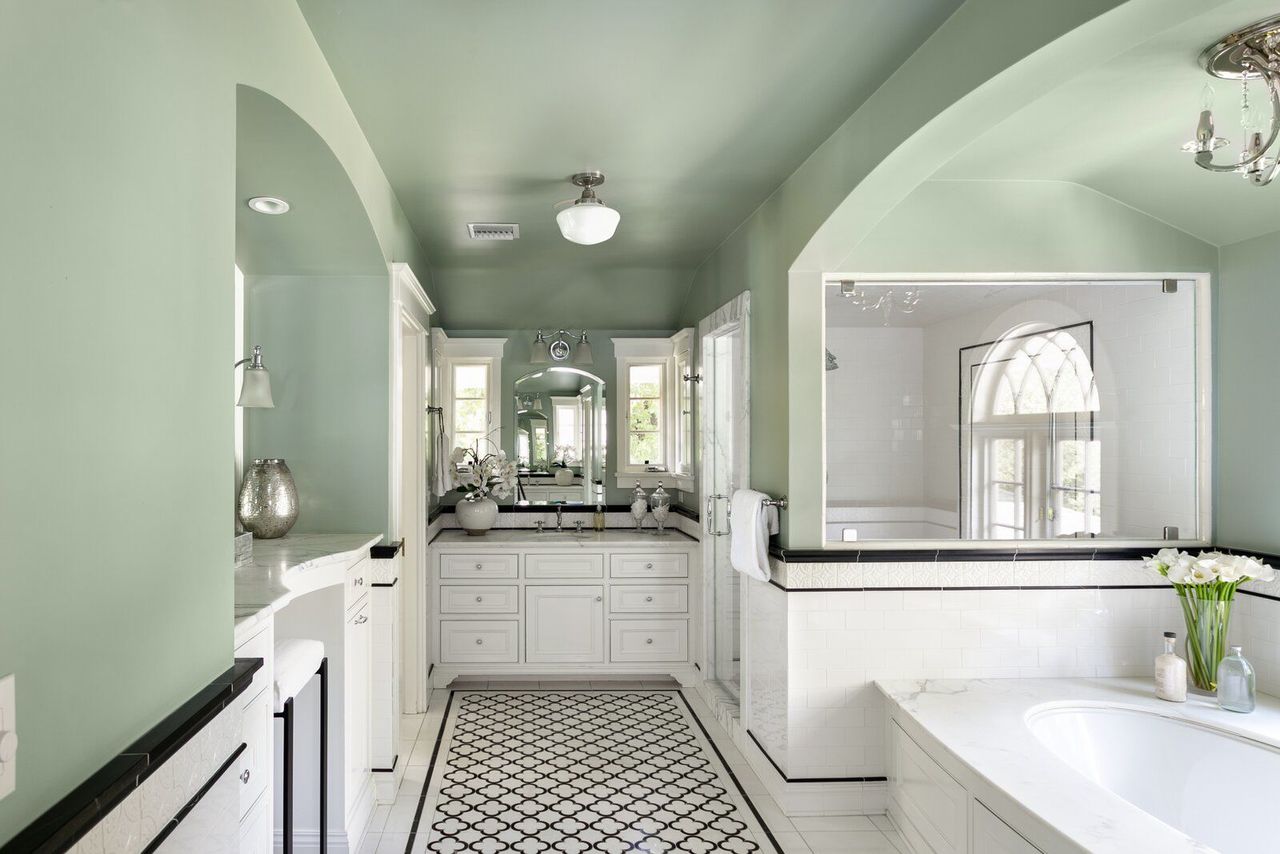 The two-level main residence features five spacious bedrooms. There is also a guesthouse for visitors. 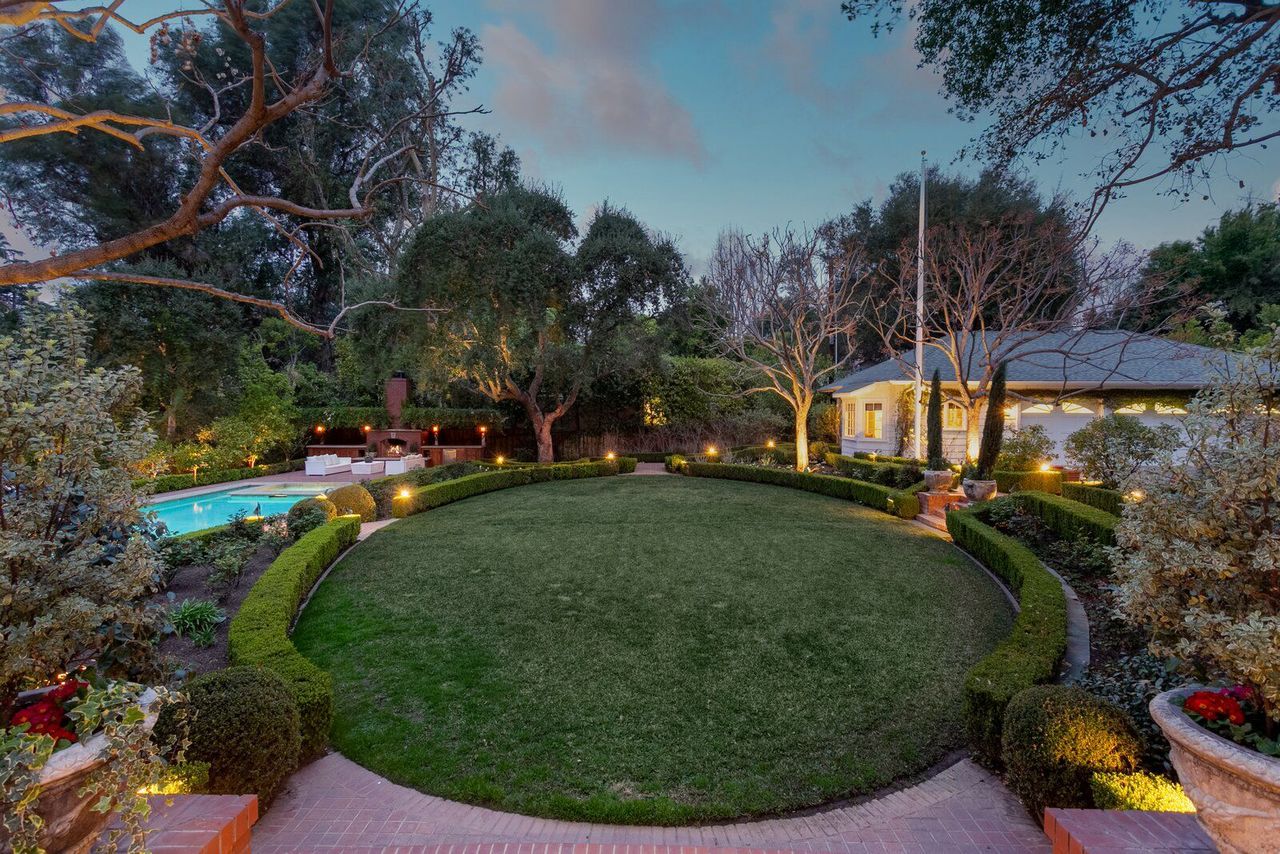 A peek at the back of the home from the edge of the pool. The property is lined with mature vegetation, including oak, pine, and citrus trees, which ensure ample privacy. 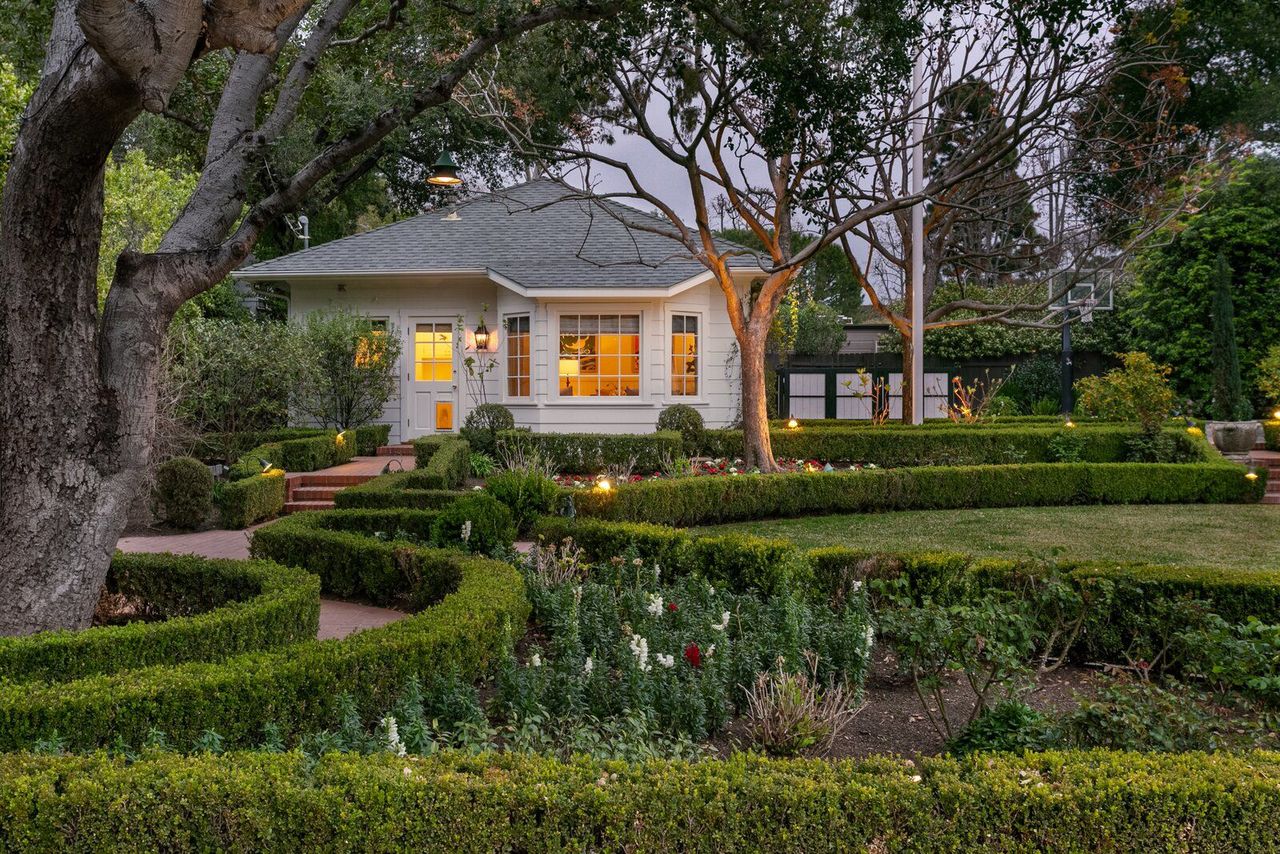