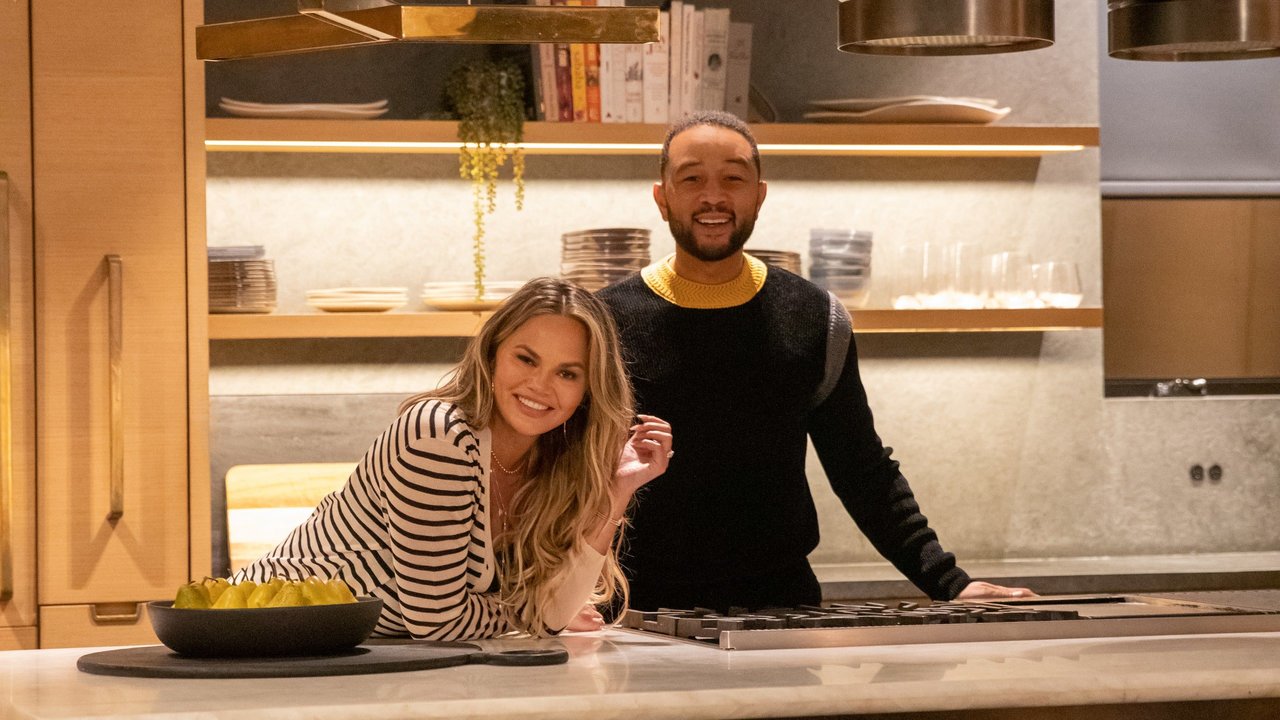 Around September, when Chrissy Teigen and John Legend began posting Instagram Stories and pictures from a rental home instead of the seven-bedroom, eight-bathroom Beverly Hills mansion they’ve owned since 2016, “people really knew it,” Teigen tells AD. What she means is that her 33 million plus Instagram followers noticed immediately that her content-which generally includes cooking tutorials, adorable moments with her children, Luna, 4, and Miles, 2, and comedic commentary-was no longer taking place against the backdrop of her Don Stewart–designed house, with its muted color palette, abundance of textures, and now famous kitchen.

“I feel like people got to know us and our home and I think a lot of people will miss seeing us there,” says Legend. The couple first put the dwelling on the market in August, decamping to a rental and purchasing a new place which they are currently in the process of renovating. Despite previous reports that the house sold quickly, it is actually still on the market for $22.495 million with Marshall Peck of Douglas Elliman. Legend confirms that they are willing to negotiate the sale of the furniture in the home, save for a sentimental table and chandelier with his song lyrics on it. And though they are looking forward to a new space after a tumultuous year (in late September, they suffered the death of their unborn son, Jack), they are both sad to see a chapter close with the sale of their memory-filled home.

Below, both the EGOT-winner and the Cravings cookbook author reminisce about their former residence and tell AD how they are designing their future.

John Legend and Chrissy Teigen Welcome You Into Their NYC Home

Architectural Digest: Why did you decide to move?

John Legend: We thought we were going to have a new addition to our family earlier this year, and so we were thinking we wanted more bedrooms and more living space. And we still expect to expand our family in the near future. 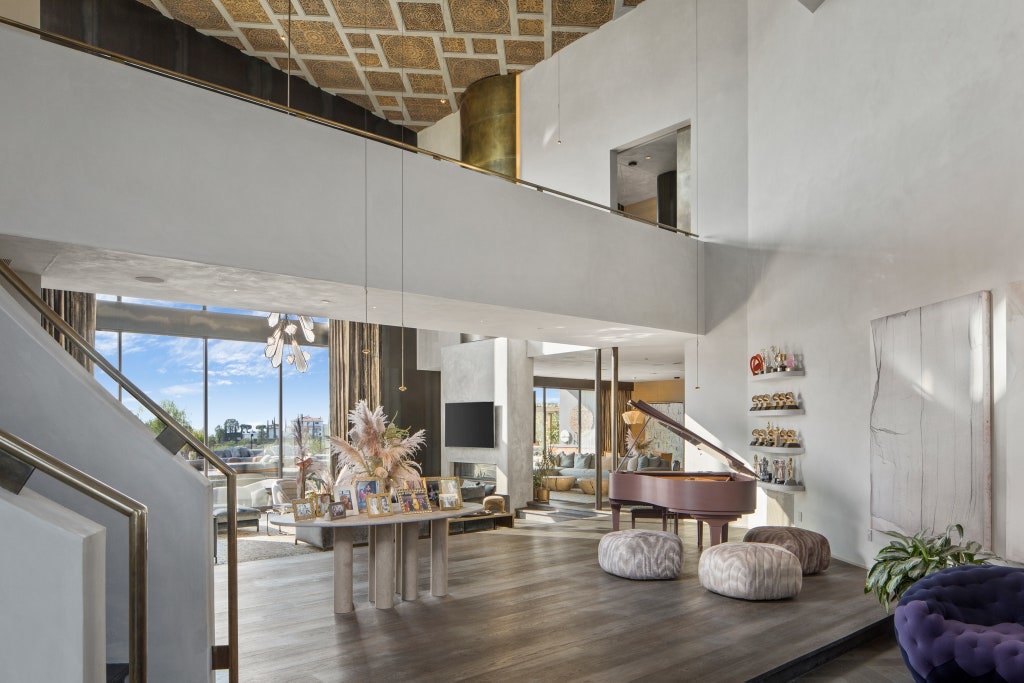 “We have looked around at so many different houses and there are so few houses that make such a statement when you walk in the house,” says Legend.

AD: When you moved into the home in 2016, how did you put your stamp on it? What will the new owner be inheriting from you?

JL: There is so much that we changed from what we originally paid for. The entire vibe of the house is different. The only thing we really kept was the floor and the gym. The staircase we made into a spiral staircase. The ceiling is a beautiful hand carved southeast Asian ceiling. We changed all the fireplaces. We just made it warmer and more earthy and also added, I think, some really cool Asian-inspired touches. Chrissy is proud of her heritage, and [our designer] Don Stewart is inspired by some of the architectural flourishes from southeast Asia and incorporated it into the home in a beautiful way.

Chrissy Teigen: I still remember walking into the home for the first time. Don is incredible with what he did. I wasn’t as much a part of the process as John was. John was very excited.... I wanted, obviously, multiple ovens. I am very weird about cooking dessert in the same oven that I cook other things in because of a disaster I had a long time ago making a cake in the same oven that I had made baked beans in. The cake kind of took on the flavor of the baked beans. So after that traumatizing situation, I decided I’d never cook dessert in the same oven. 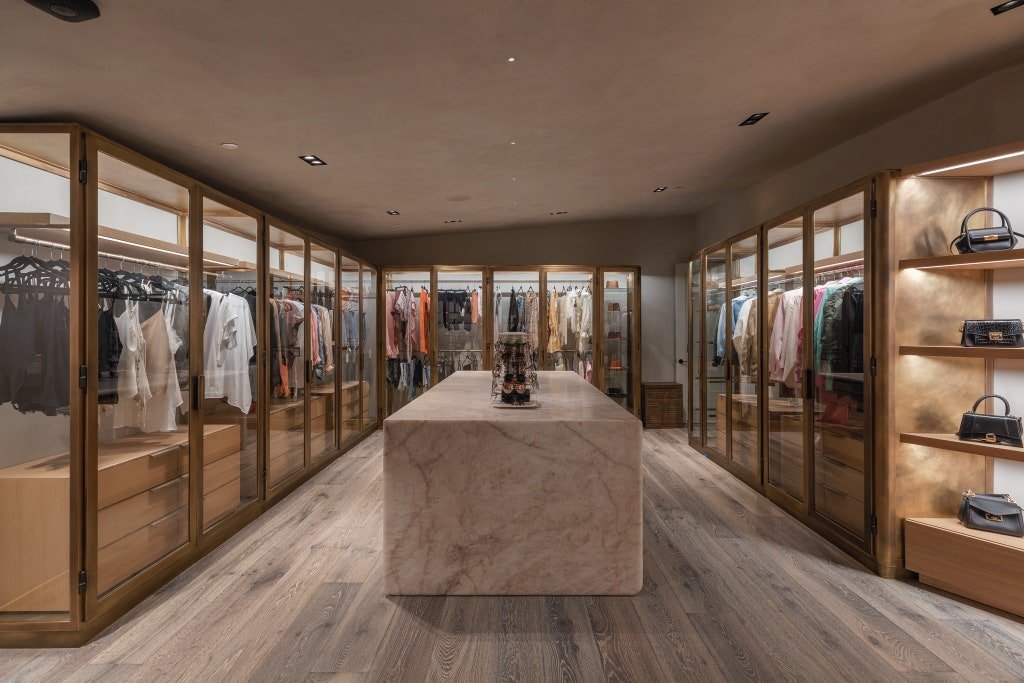 “I feel like I never fully got to fulfill my closet dreams at our old house. We [are giving] it to the next person,” says Teigen.

AD: Do the two of you agree when it comes to design choices?

CT: We have the same taste. I tend to love really soft things that are feminine, and he does too. Roses, blushes, nudes, grays. See, to me, there are like 10 different types of gray, and I love that. He loves things romantic and feminine too.

JL: We don’t disagree very often. It is crazy, because obviously our personalities are different, but when it comes to design taste I find that we are very similar. There is almost no time when I dislike something that she really likes or vice versa. There are occasions when she’s over something and I’m like, well, I still like it. We have gone through a few couches where I’m like, I was fine with the old couch and she’s like, I want a new one.

AD: If you had to move into a home of someone you know, whose house would you choose?

CT: I never leave our house! When I tell you I have best friends who I've never been to their homes—that is why our home is so important to us. We are the ones that host. I don't even know anyone else’s space.

JL: Let me think about that. It is interesting because I have friends who I think have really great taste but are also a little bit different from mine. Like Kanye West. I really admire the things he does with his home. It isn’t exactly where I would live, but it is also really beautiful and looks so beautiful in photographs. I like the way Ellen DeGeneres decorates a lot. I feel like we have similar taste. I could see us living in a space like she decorated.

AD: Can you reveal anything about your plans for your new house?

JL: We wanted to freshen it up and when we go to the new place we are going to do something a little different. But I think we will still have a lot of elements of our taste. There’s certain things about us that remain pretty consistent. We like to feel comfortable and not too sleek and not too clean. We like things to feel like they are connected to the earth and not super duper modern. Some of those sensibilities we will bring to the new place. I think what we have done with both the old and new is that we bought places that were pretty modern and clean but we find ways to rough them up a little.

CT: The kitchen will be my favorite part of the house, because it leads into that area with the tree—I don't know if I can talk about the new house, really! But the open area of the new house has a gorgeous tree and this beautiful seating area.

AD: Is it hard to leave a home where you have so many memories?

CT: The emotions of that are very intense. Thinking about all the things that house has experienced and all the transitions and what my life has been through. It is incredible. It is more than just a space. So many fantastical memories. Honestly, I still go back to [one of our previous homes] and I hit that buzzer and talk to the person who lives there. Me and my mom maybe eight months ago went to that house and spoke to the owner and checked in on it. I assume I am going to do the same thing with this house.