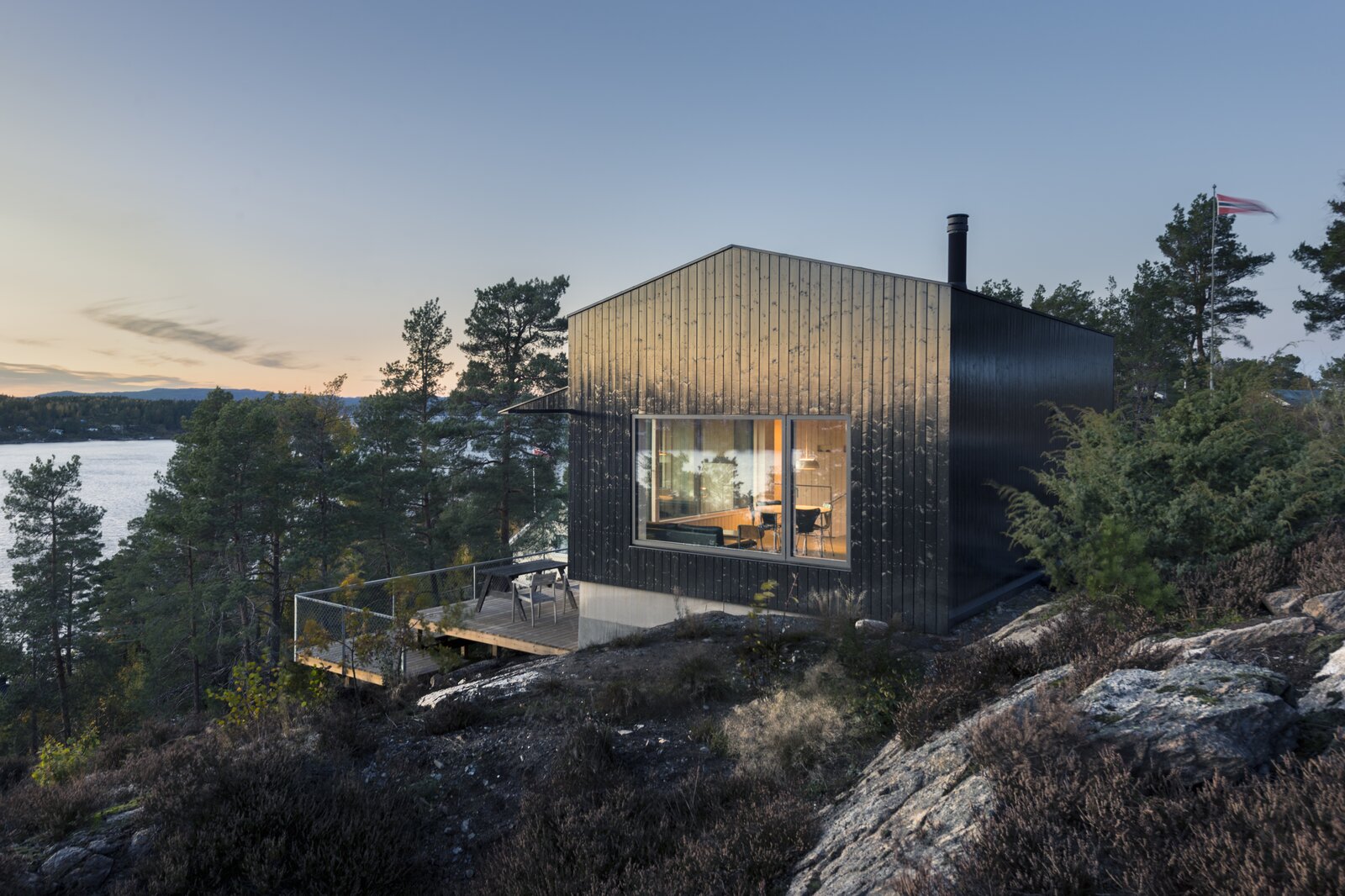 The glossy black cabin that architect Jon Danielsen Aarhus designed for a mother and her two daughters in Son, Norway, is a multilevel retreat that mimics the steep rock hillside on which it’s perched. The architect saw the landscape as an opportunity, not as a deterrent. "The building is situated on naturally occurring ledges in the steep terrain," Aarhus says. "The eastern facade is low and hidden, but the rear facade is more exposed and open to the sea, which is only about a five-minute walk [away]." 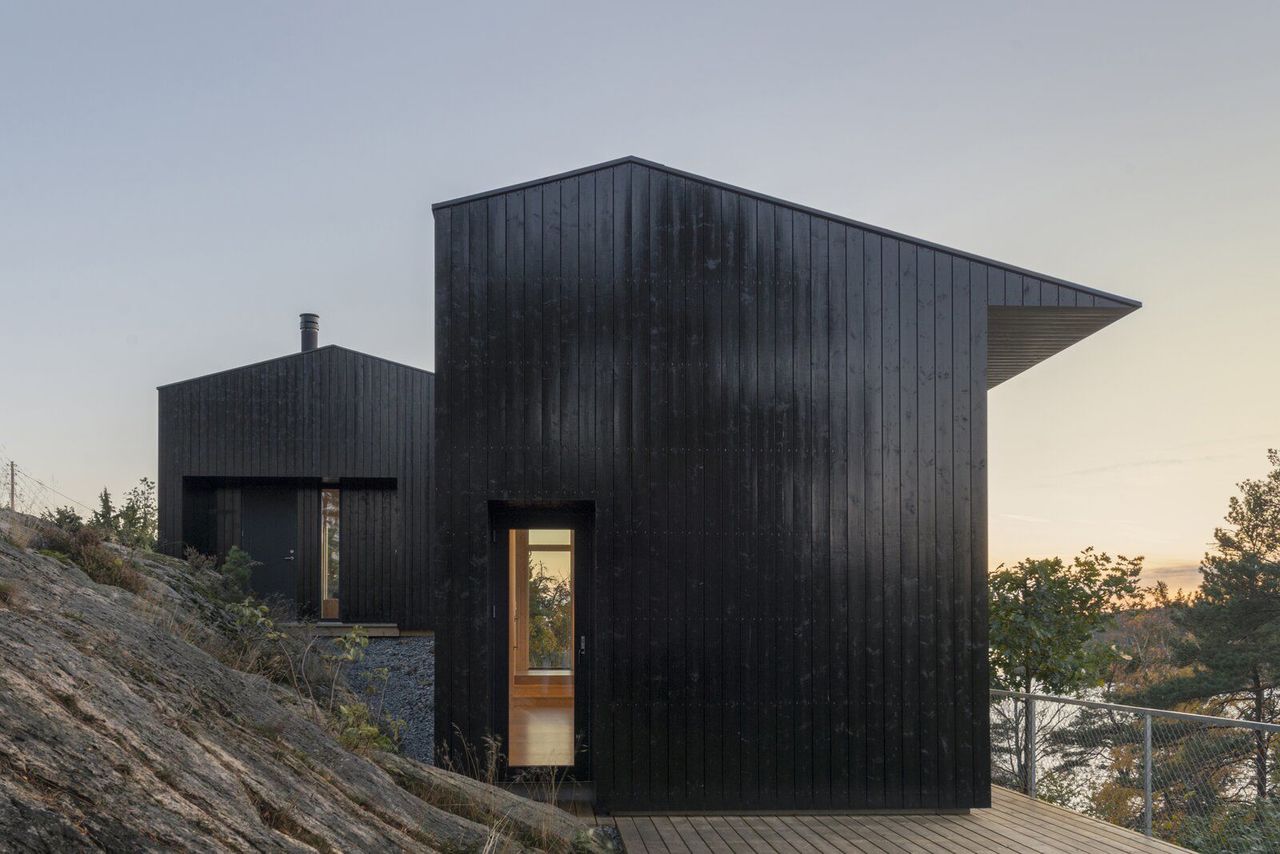 The 750-square-foot cabin that architect Jon Danielsen Aarhus designed in Son, Norway, is situated on a sloping hillside of solid rock that overlooks the sea.

There are neighbors on all sides, but the 750-square-foot cabin is situated so that Aarhus’s clients don’t really see them. Instead, the family sees towering pines and epic views of the sea and Jeløya, a large island in the Oslofjord, an inlet in the southeast of Norway.

"It was important not to change the landscape and level the bedrock with dynamite," Aarhus says. "The natural terrain here is beautiful, and it would be a shame to blow it all away." 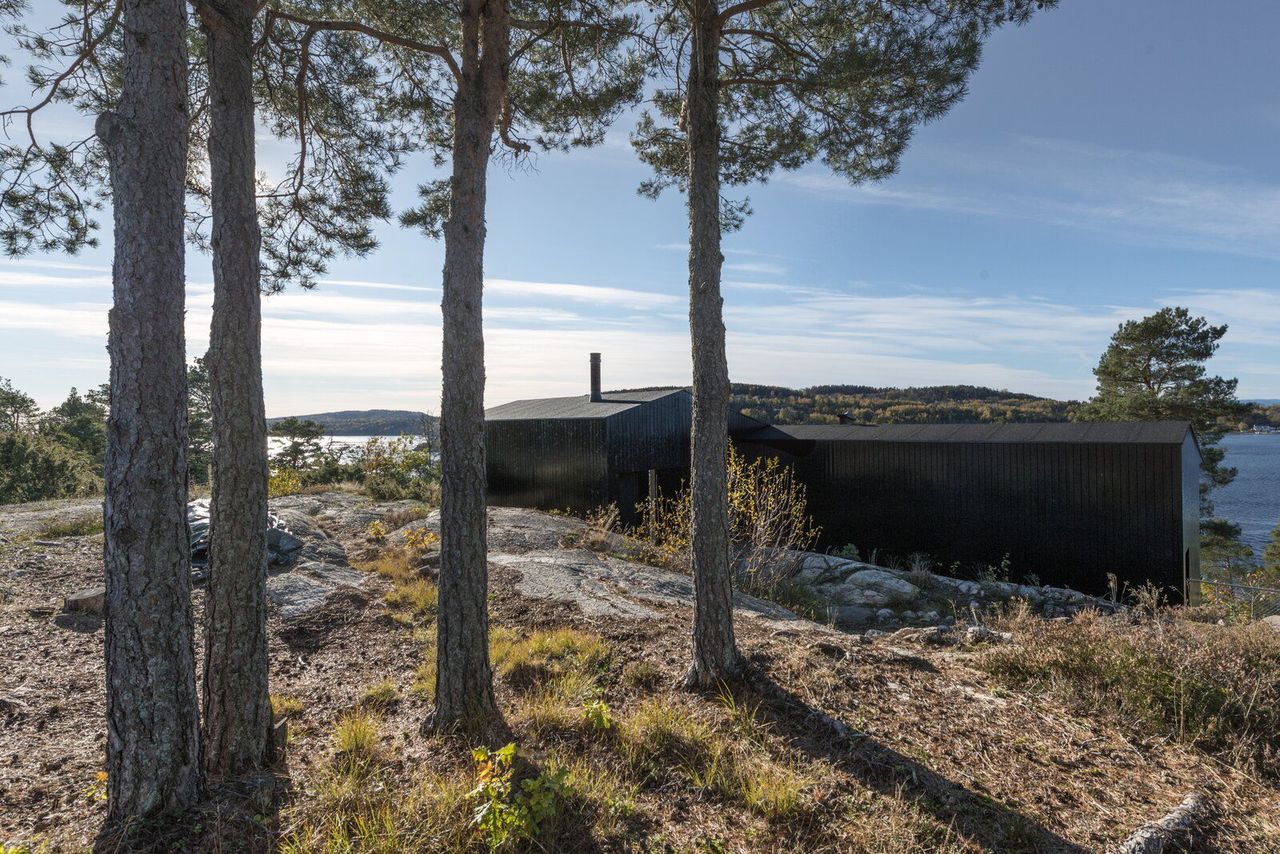 The eastern facade is tucked against the bedrock, allowing for privacy from neighboring homes.

The client, a technical drawer who the architect worked with previously, requested a modest design that ties to the surrounding nature. "The plot has been in the family for generations," Aarhus says. "It’s about an hour away from bustling Oslo, where the mother and daughters live full-time."

The family also requested various spaces that would make the home, dubbed the Cabin Son, feel larger than its 750 square feet. Aarhus responded by creating different interior levels that respond directly to the stepped quality of the terrain. 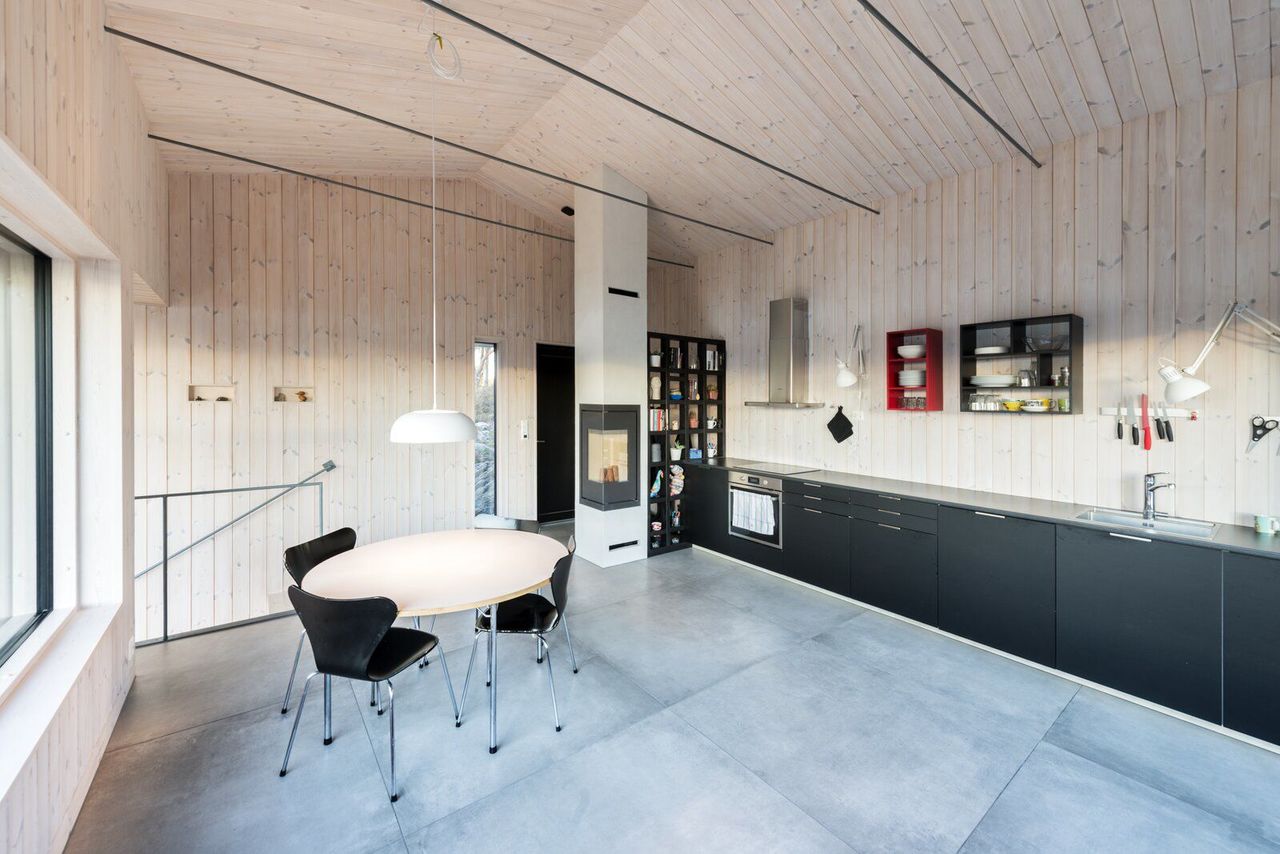 The cabin interior-including the open-plan kitchen, dining, and living areas-features a spruce-covered ceiling and walls that provide a warm aesthetic in contrast to concrete-like tile floors.

Aarhus arranged three bedrooms and a bathroom on the lowest level, where a loft or mezzanine provides a quiet space to sleep, read, or relax. The large main living area and kitchen are located on the third level, with a smaller secondary living room situated a few steps down from this area on the second level. 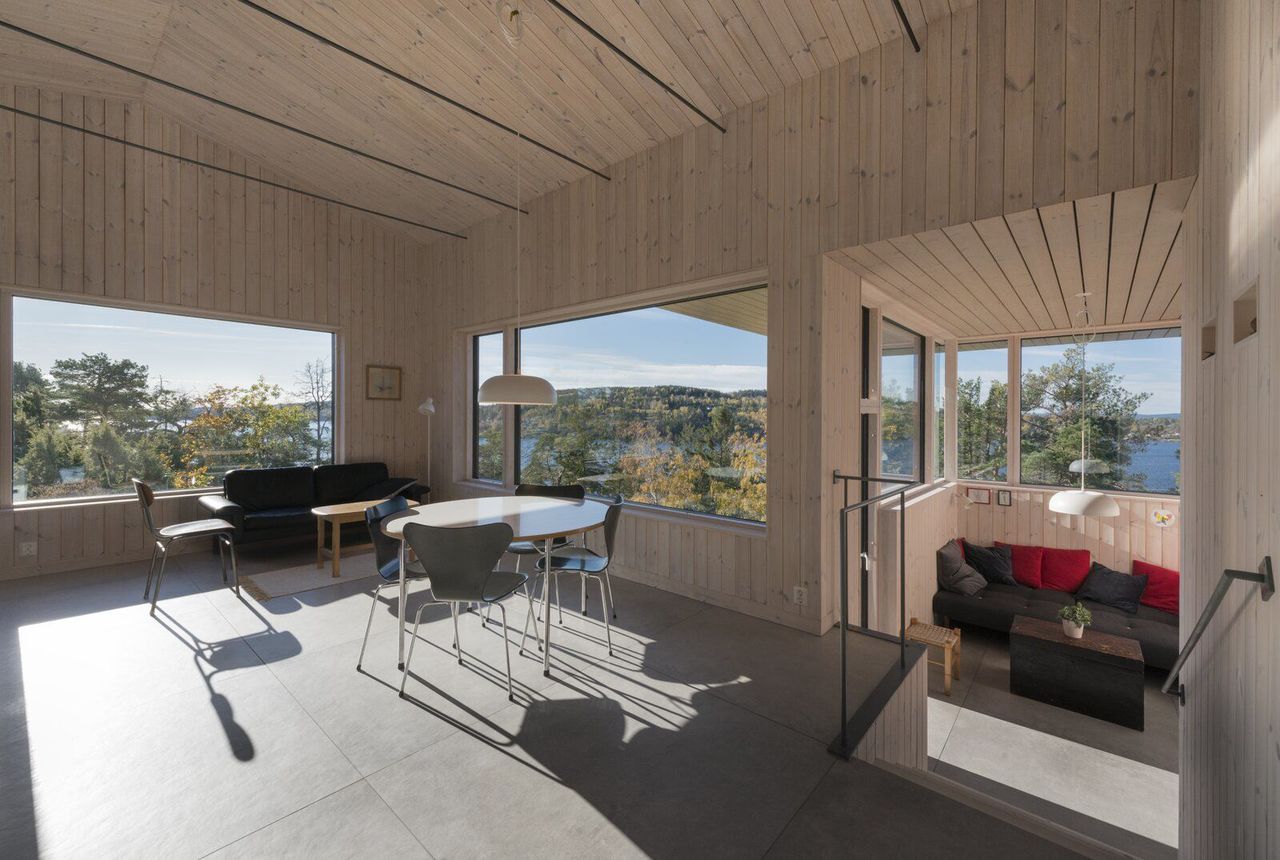 A secondary living area is arranged a few steps down on the second level. Expansive windows on both levels tie the cabin interior to the surrounding landscape. 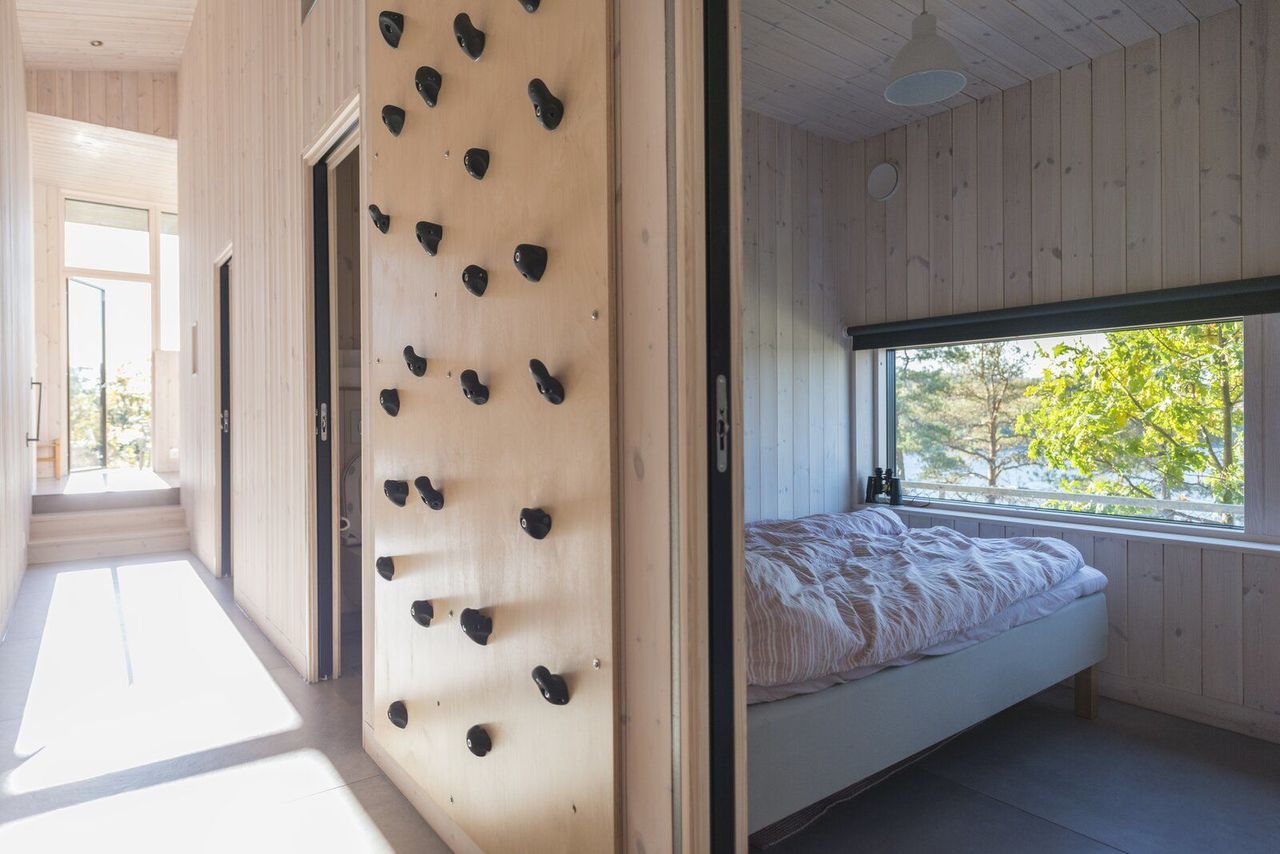 Inspired by the rocky hillside where the cabin is situated, Aarhus designed a rock climbing wall in the hallway that accesses the bedrooms on the cabin’s lowest level. 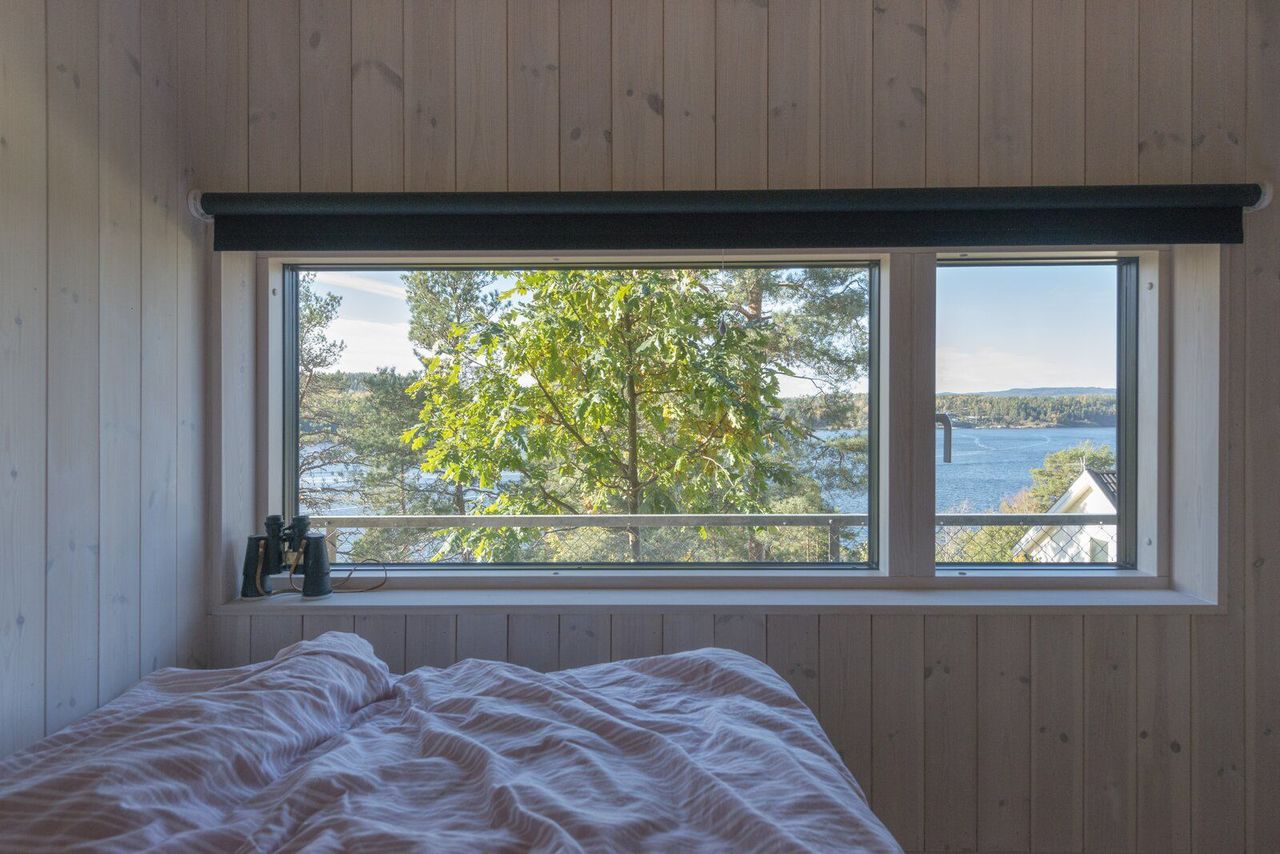 "The size of the different rock ledges where the building is placed decided which rooms went where," says Aarhus. Doors open to the landscape on each of the cabin’s three levels, and a sheltered area between the new and existing structures provides additional outdoor living spaces, in addition to a southwest-facing terrace. 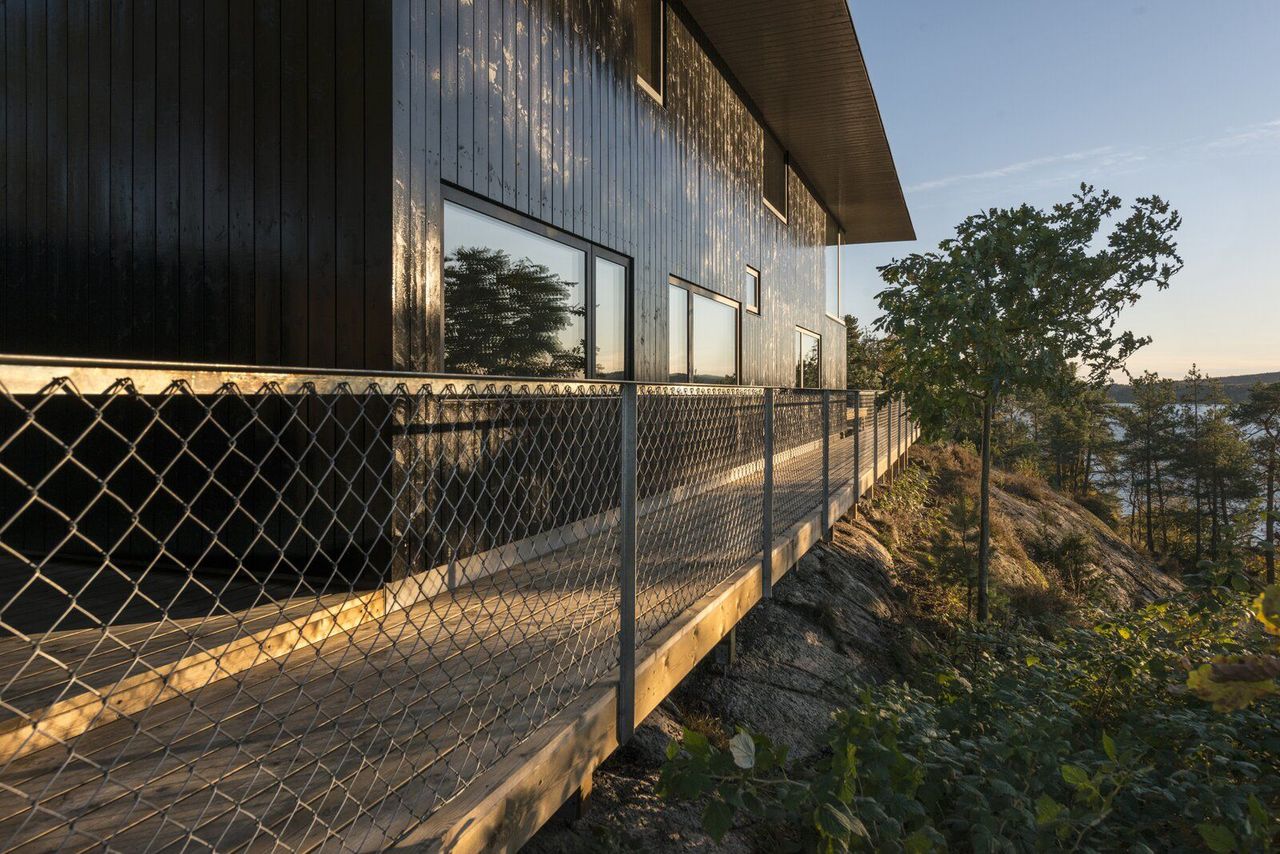 A long and narrow bridge connects an existing cabin on the site with the new structure and provides a lookout area where the family can observe the sea.

Aarhus drew inspiration for the design from an existing tiny cabin on the site, studying its orientation, relation to the landscape, color, and roof angle. He also noted a bridge on the western facade that acts as a narrow lookout area on the exterior. Aarhus extended the bridge so that it runs along the western facade of the new cabin, connecting the two structures and allowing passage between them. "The existing cabin now functions as an annex to the new building," Aarhus says. "They relate to each other visually and spatially." 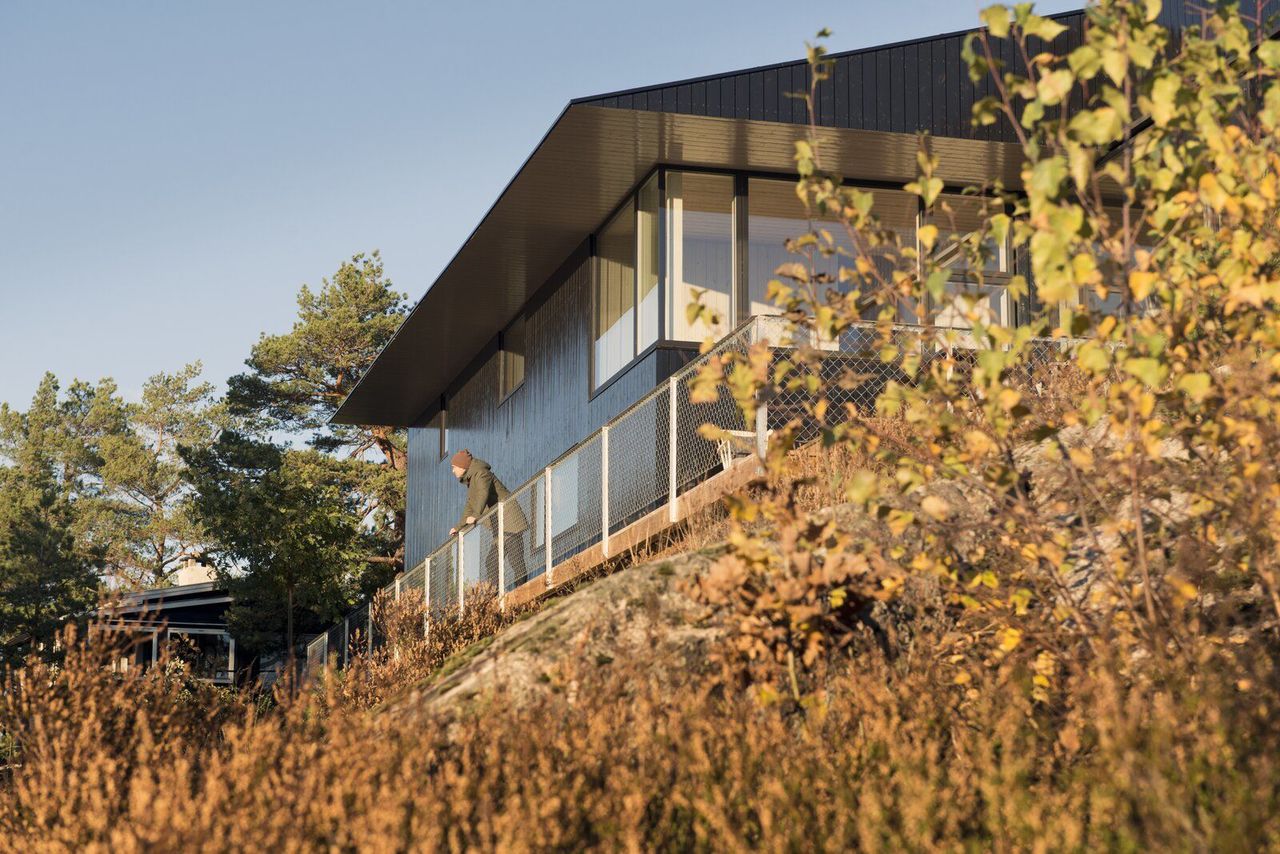 Tall pine trees and thick brush near the cabin are a counterpoint to the structure’s glossy black exterior.

Aarhus clad the cabin with a saltbox-style roof and vertical spruce boards finished with a high-shine black stain. "We chose spruce because it’s inexpensive," Aarhus says. "It’s coated with Beis, which soaks deeper into the wood, kind of like an oil treatment."

The siding, called "barn cladding," or låvekledning in Norwegian, features spacing between the boards. "Historically, this let air flow through a barn and dry stored hay," Aarhus says. For the cabin, it allowed the architect to tuck air vents behind the cladding, creating a clean aesthetic for the exterior. 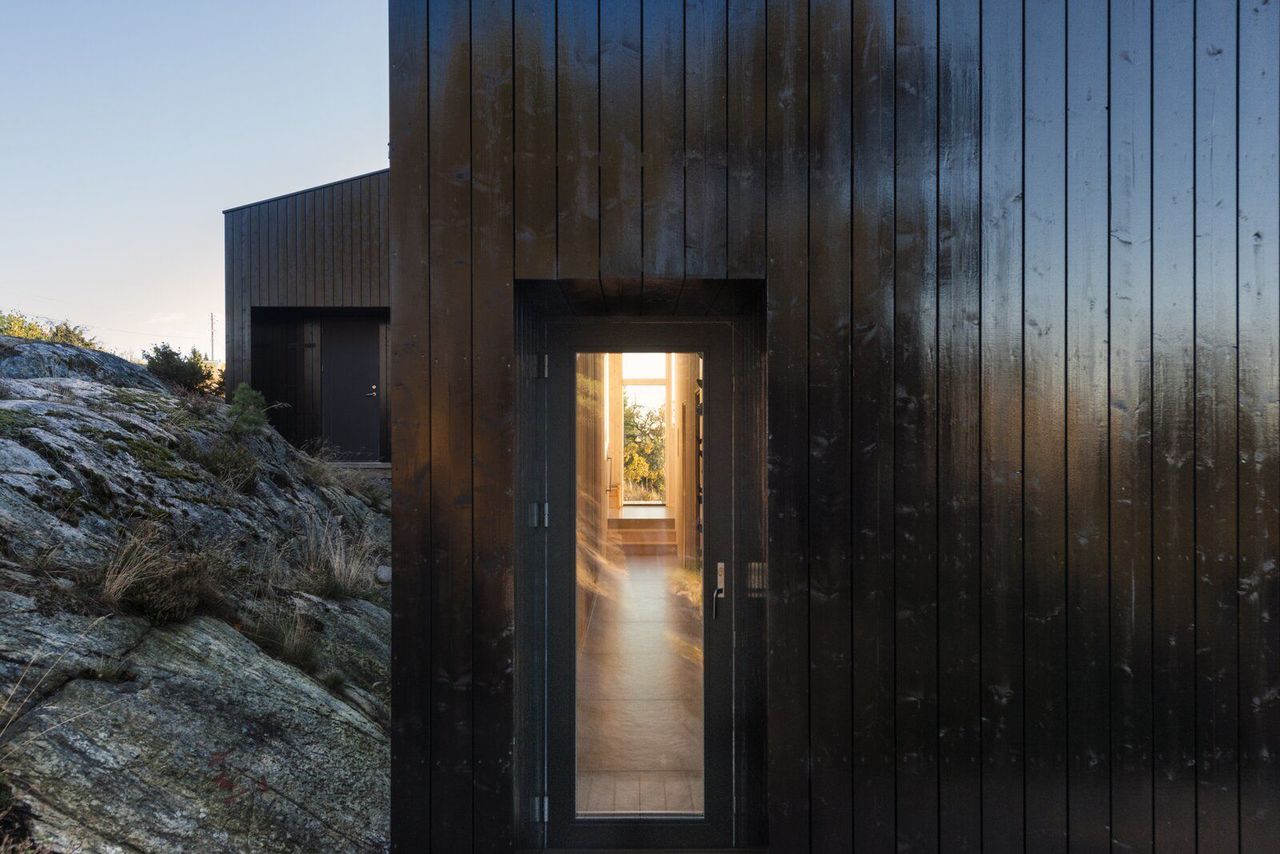 The bedrock that the cabin pushes up against creates a feeling of being nestled. A passageway with glass doors at either end floods the interior with sunlight and glimpses of the natural surround.

"Although the cabin is quite small in size, there are quite a lot of different spaces where the family can spend time with a degree of separation from one another," Aarhus says. "They can be in different areas but still have contact, openness, and connection to the landscape." 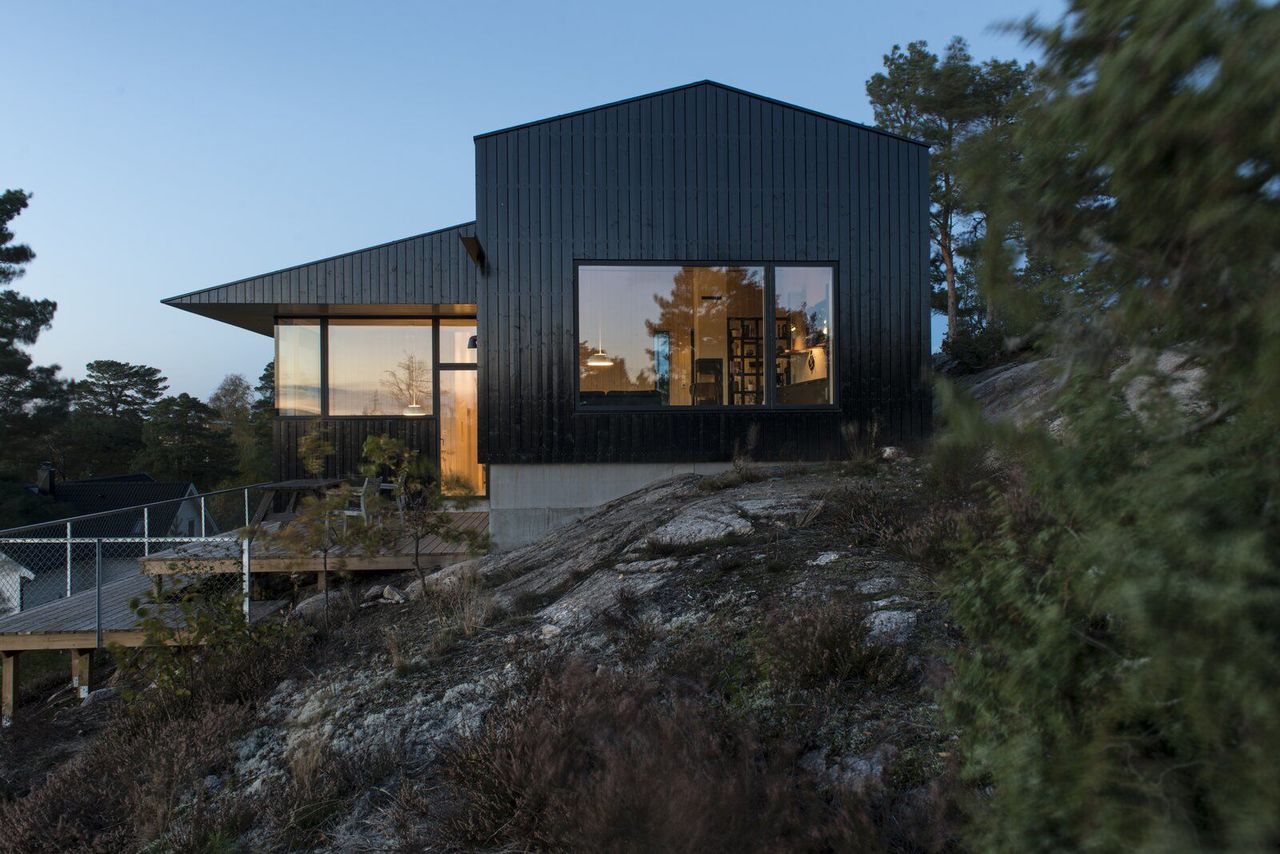 The cabin’s structure steps down along the rock hillside, tracing its slope.