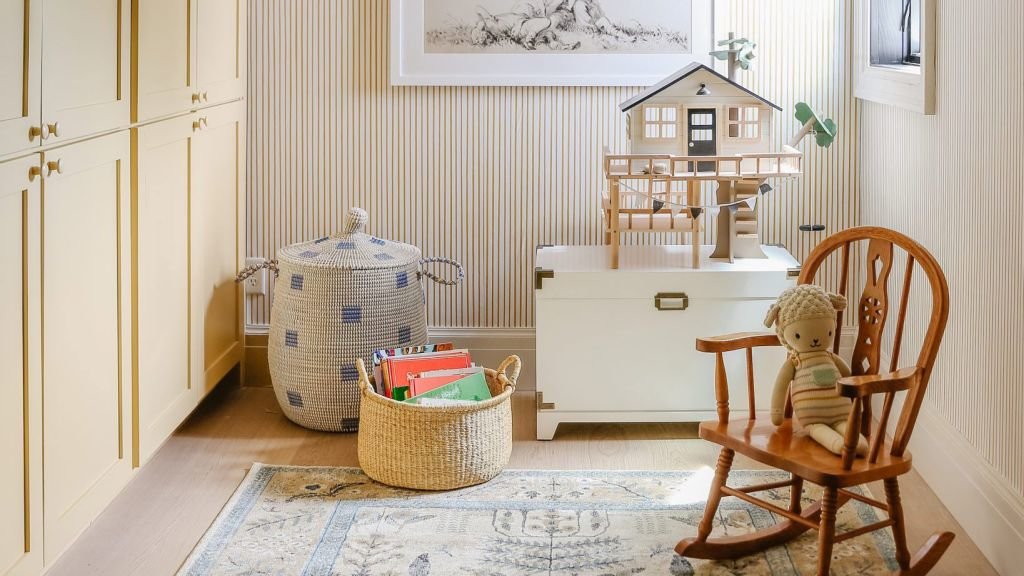 Before & After: See how a cluttered hallway was transformed to a chic play room

A former hallway has been transformed into a sunny playroom. The make-over was done on a tight budget, but the result is strikingly chic.

Chris and Julia Marcum’s current playroom started off as a temporary fix for a lack of other play room space. When the couple behind the blog Chris Loves Julia moved into their new home last summer, they needed somewhere to store toys while they gutted the ground floor.

Upstairs, a 7-by-10-foot nook that jutted out of a secondary hallway between the girls’ bedrooms already had floor-to-ceiling storage (it was used as a sewing space by the previous owners), so it was the perfect place to stow away toys while Chris and Julia thought about creating a cosier playroom for their three daughters, aged 10, 6 and 3. 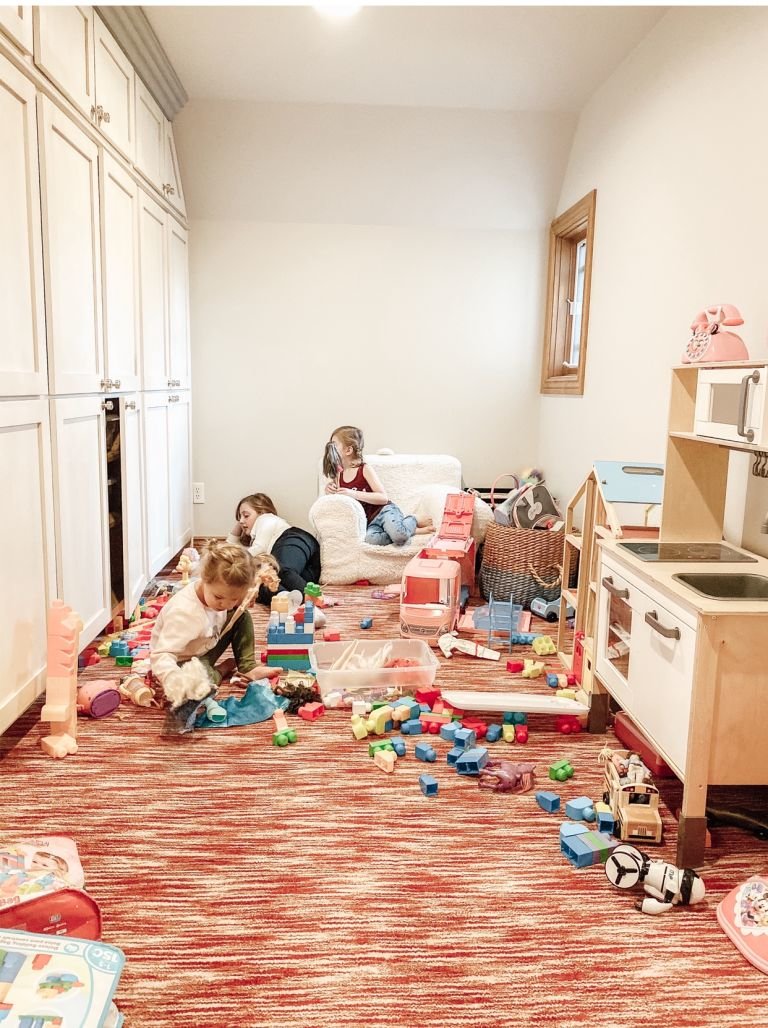 One year later, the couple realised they didn’t need another zone. The girls loved playing in this nook near their bedrooms, and Julia compared it to the fishbowl analogy: If the girls were given a bigger space, they would fill that, but they were just as happy in this smaller nook area. So Chris and Julia focussed on making this upstair hallway-playroom cosy and decorated instead.

Out went the dizzying red and white carpet, and in went new wide-plank engineered flooring. To soften the hard surface, they laid down a pretty rug and moved the toys back in. 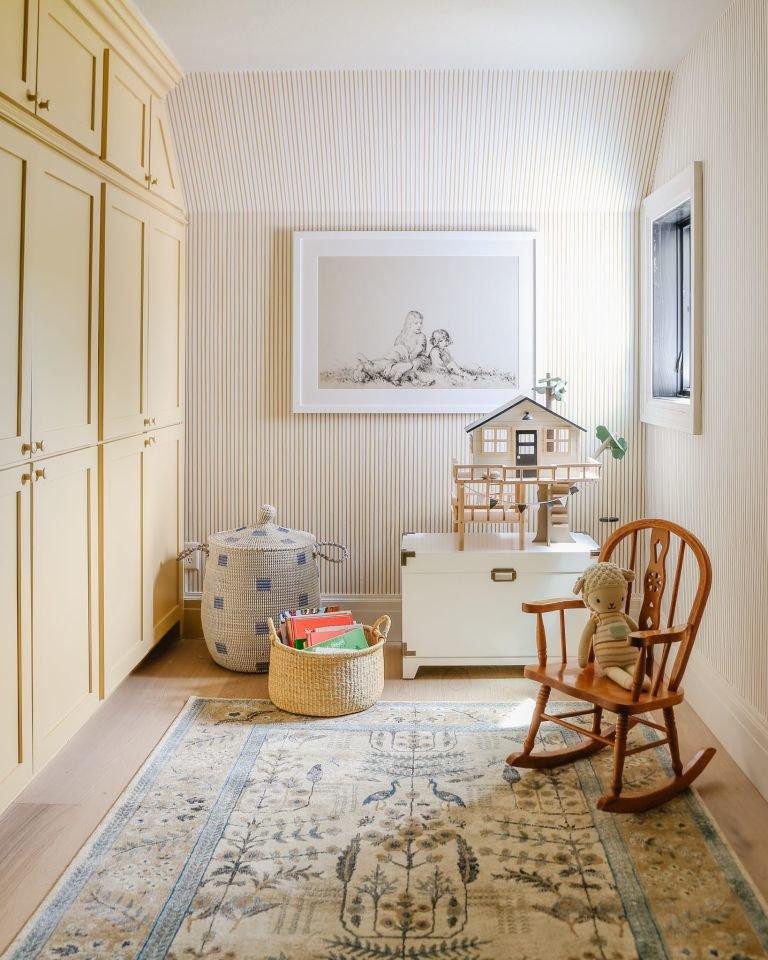 The couple decided on a vintage-inspired, soft colour palette anchored around a buttery yellow shade, which Julia used to paint over the built-in cupboard doors.

She then replaced the metal hardware with softer, wooden knobs painted to match, to give the doors an old English feel. A golden stripe wall covering from Chasing Paper gives the finishing touch. 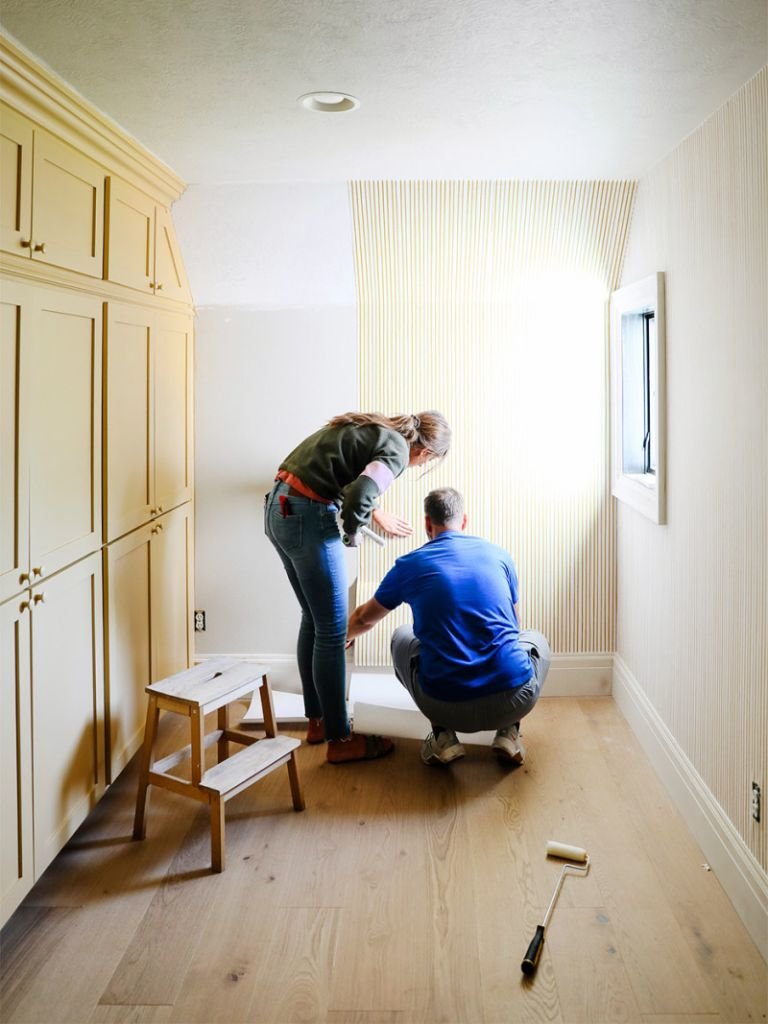 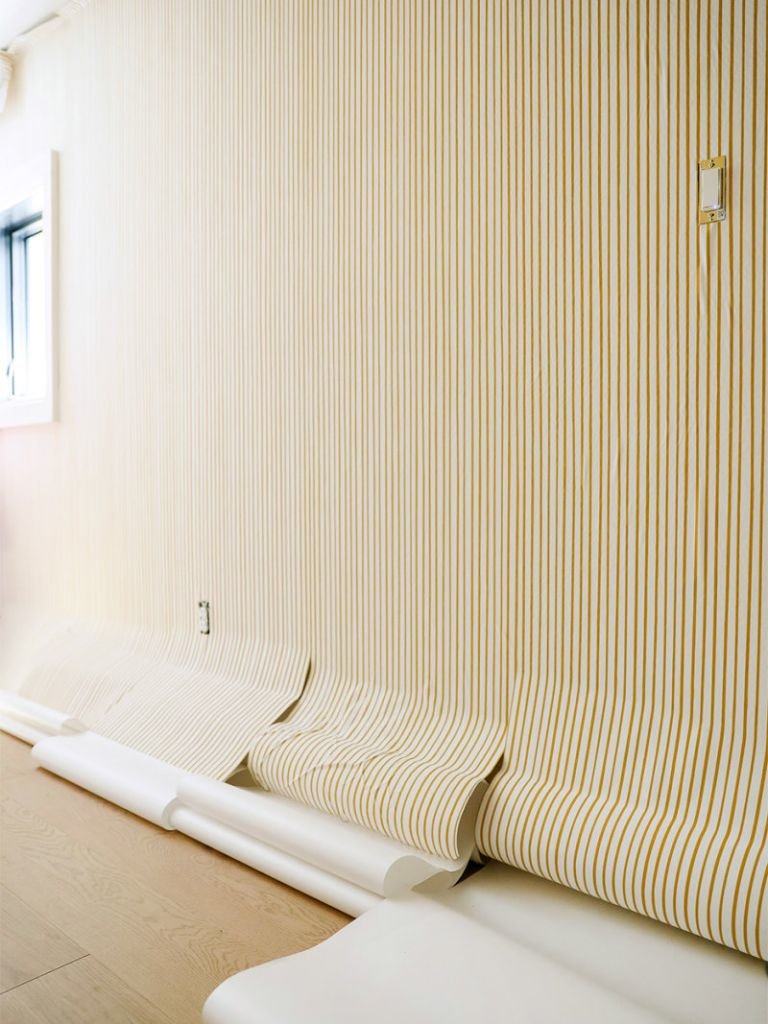 The narrow square footage meant that very few pieces would work in the space without feeling cramped, but luckily the toys were already stored away.

Because her daughters love to sit on the floor and play, Julia kept bulky furniture to a minimum. They love to dress up, so they needed a chest for costumes. Julia gave it a double-duty function by propping up the girls’ play treehouse on top. 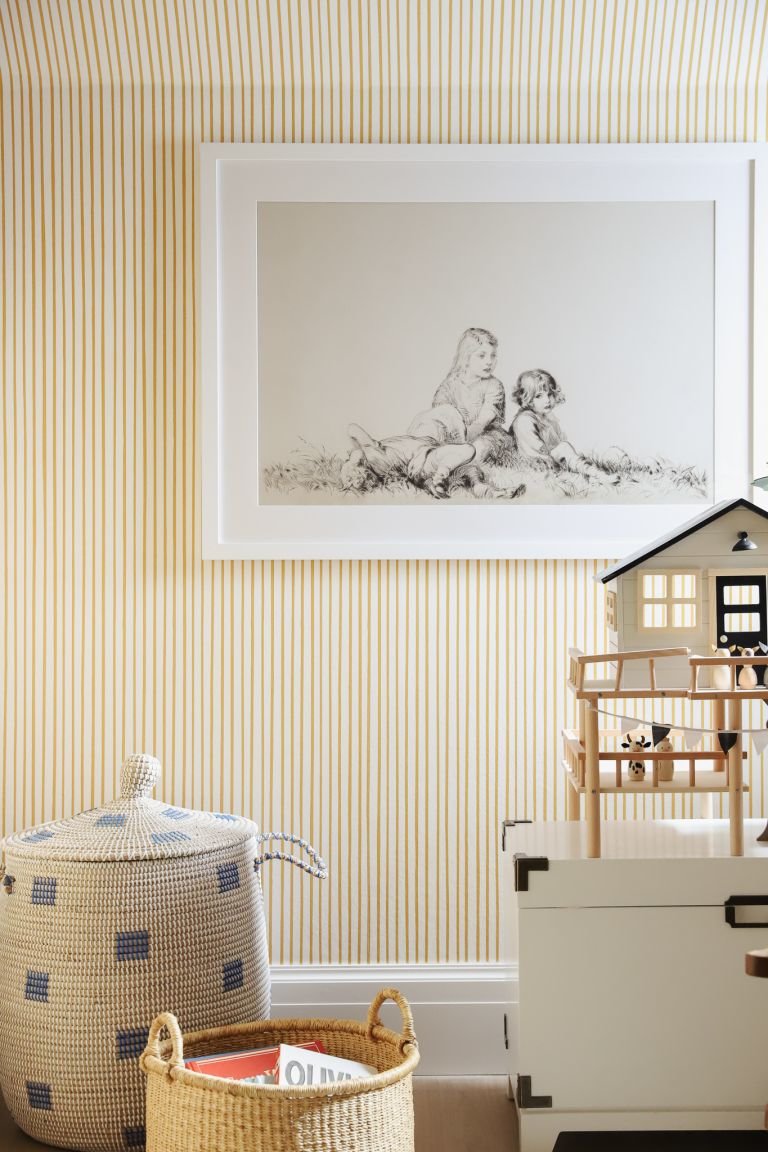 The chest of drawers in the hallway houses the kids' bedding. The space is central to all three rooms, so it’s the perfect place for it. Julia topped it with books and added a tiny chair next to it to form a cosy reading area. 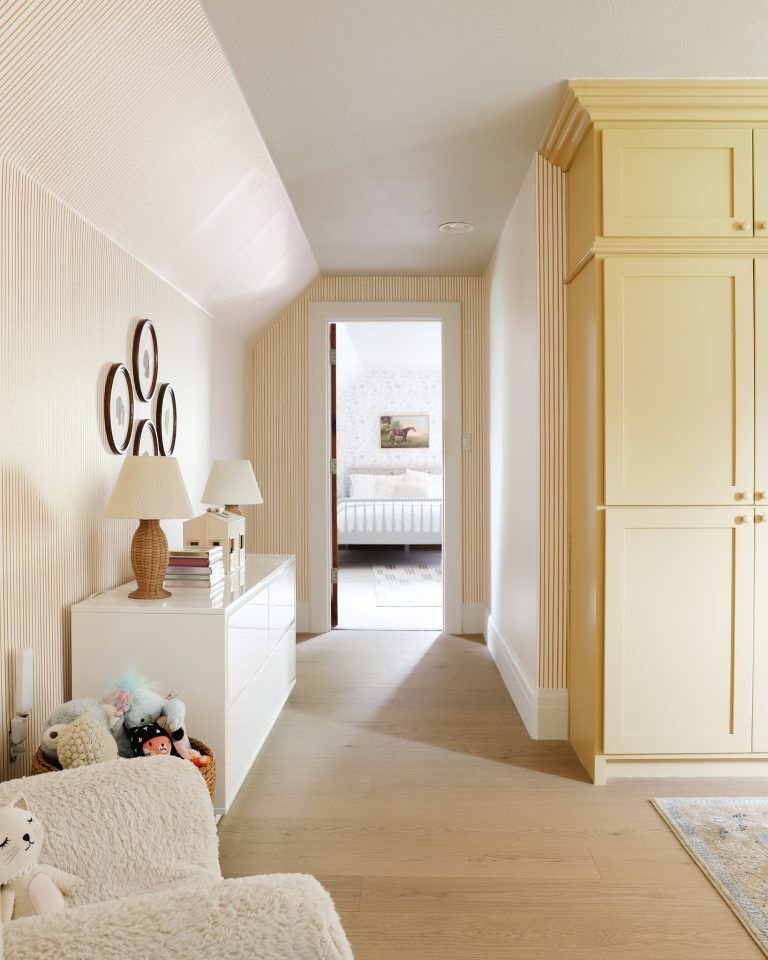 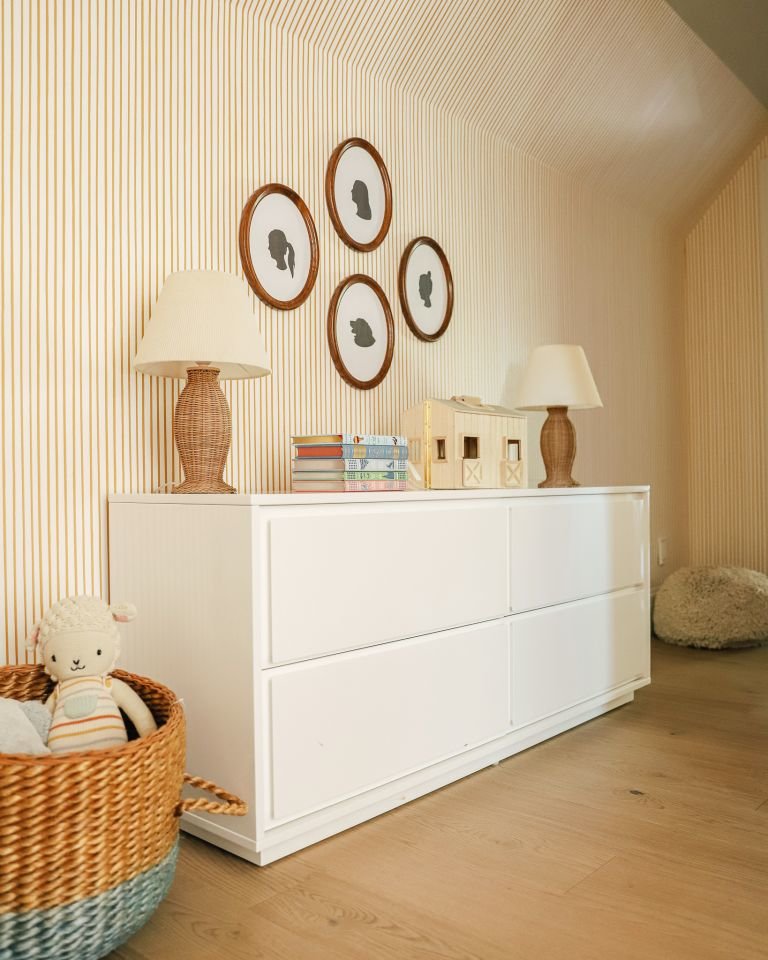 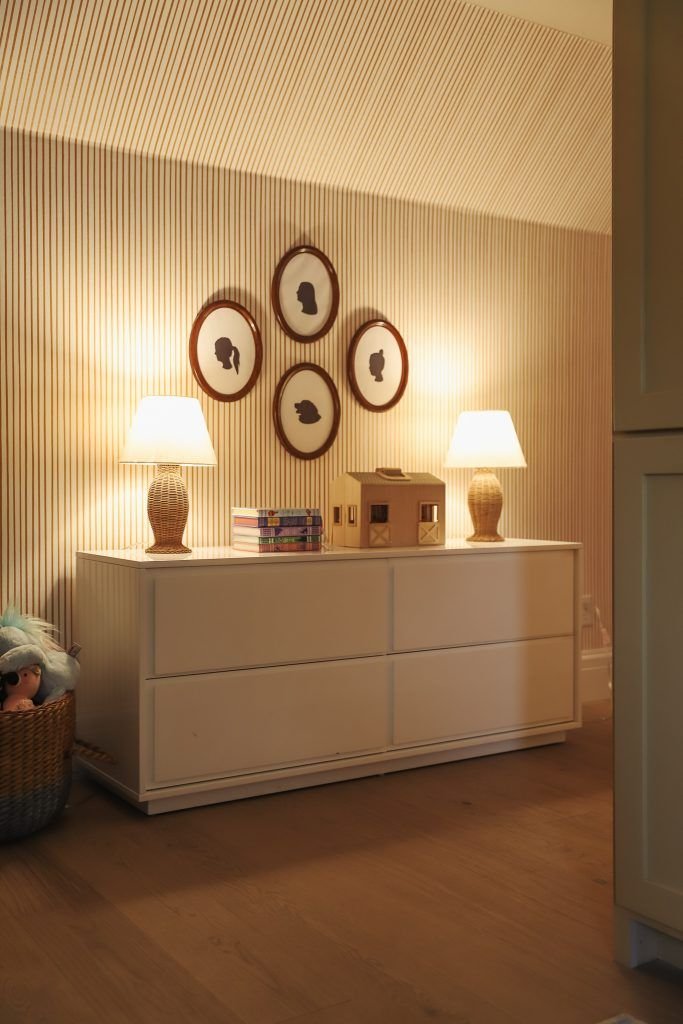 Wicker lamp bases, framed portraits of the children, a furry chair and some whimsical toys including a pretend tree house and stables help complete the look. 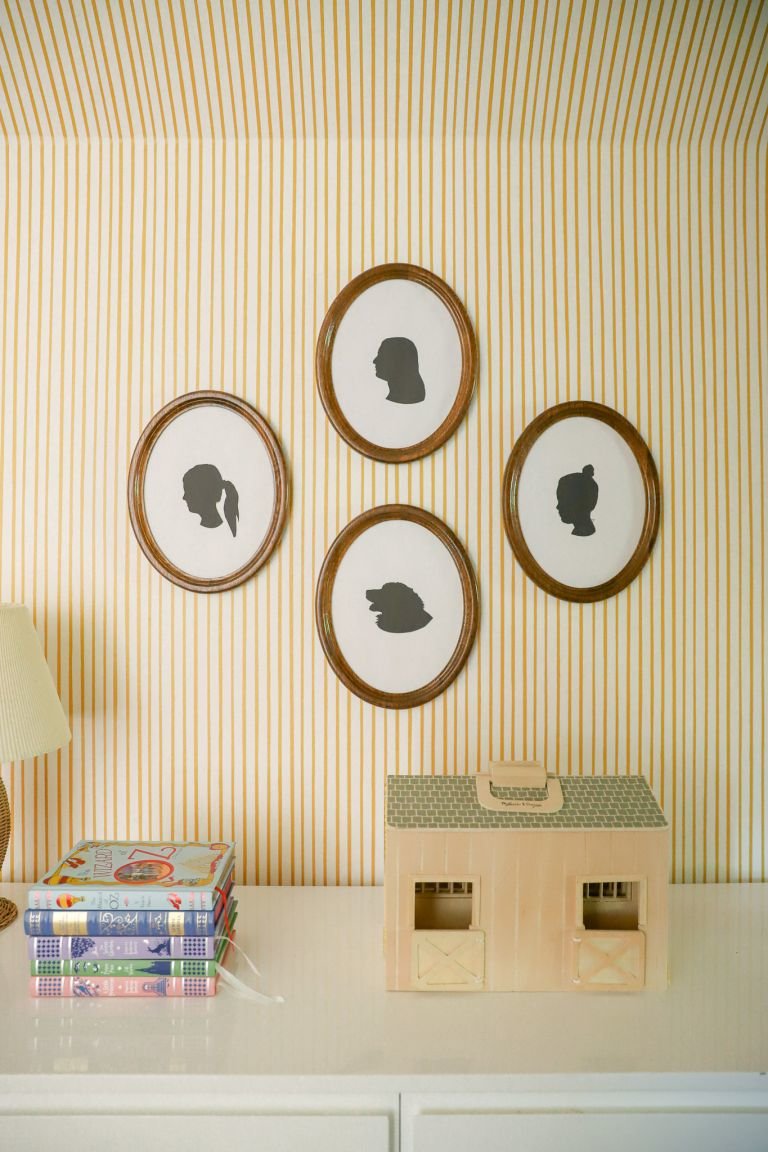 Julia says: "Maybe one of my favourite things about the playroom is that it has a purpose now. It works hard. Definitely plays hard. And what once was a awkward hallway that felt more like wasted space (I’m the first to admit that!) now is filled with memory making and laughter and our girls love this hideout".