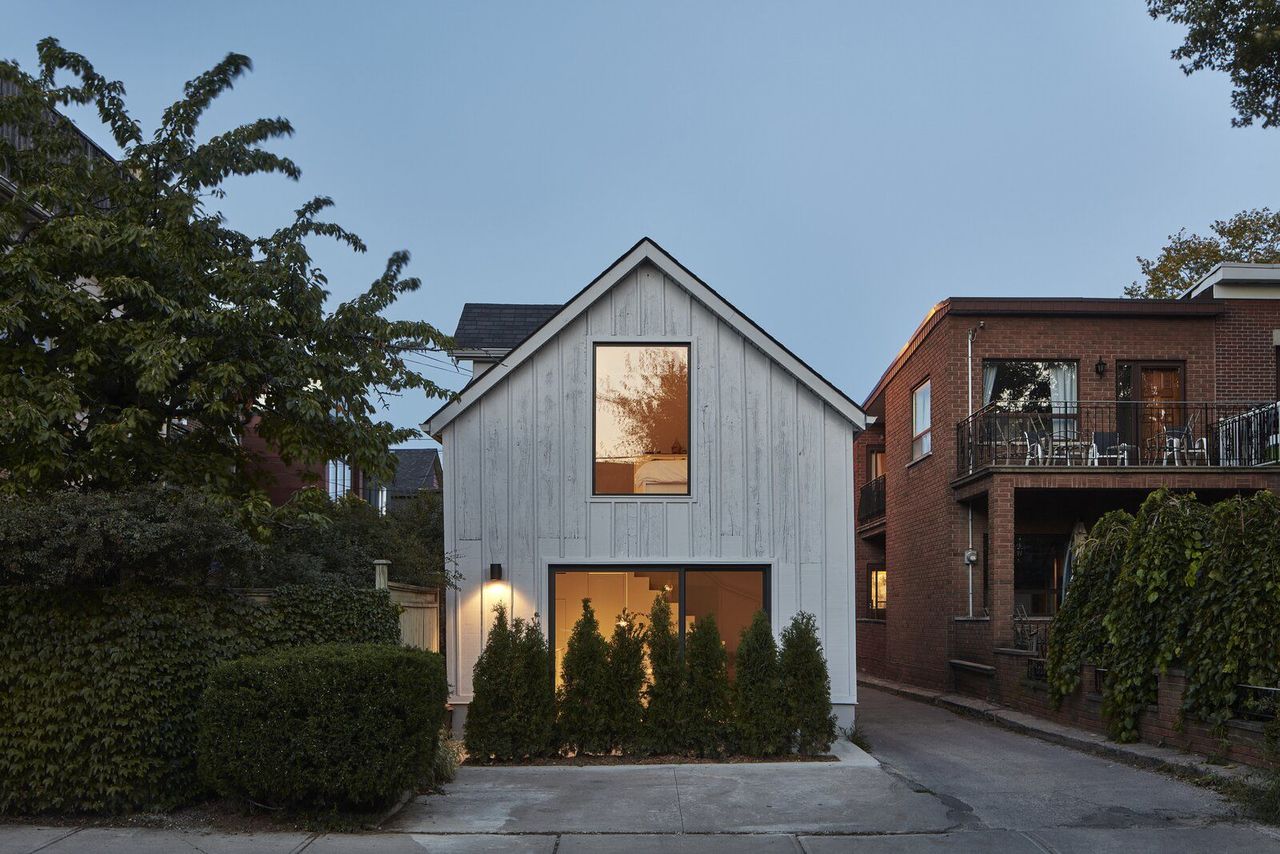 In some ways, this little shack in the Beacon Village neighborhood hasn’t changed much at all since it was erected as a barn 100-plus years ago. Though the white exterior has faded with time, the original wood paneling, A-frame outline, and hay-bale window remain. But inside its barn-board facade, architect Timothy Mitanidis of Creative Union has created something wholly new: an artfully compact, modernist laneway home. 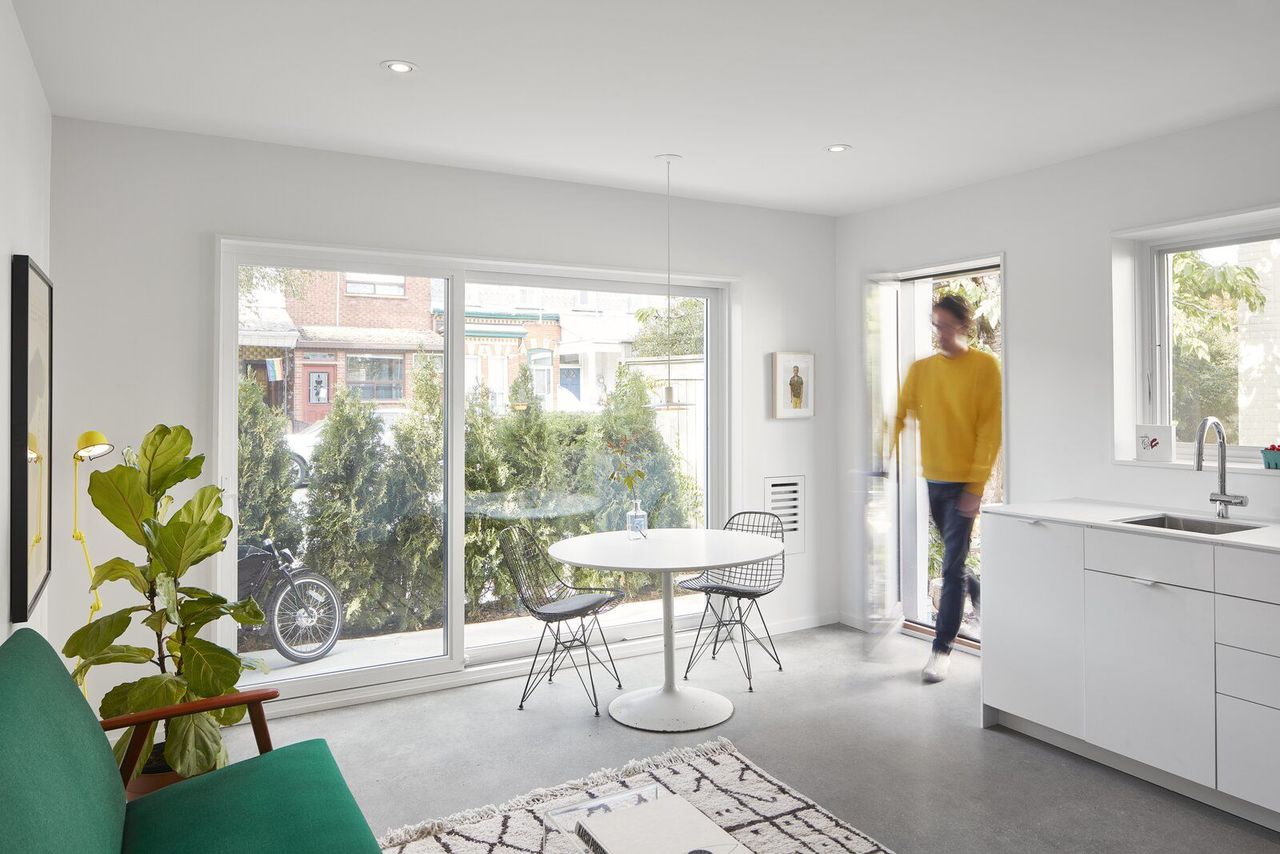 The homeowner brought his own excellent taste to the project, choosing colorful furniture and decor that fit the home’s modern vibe. 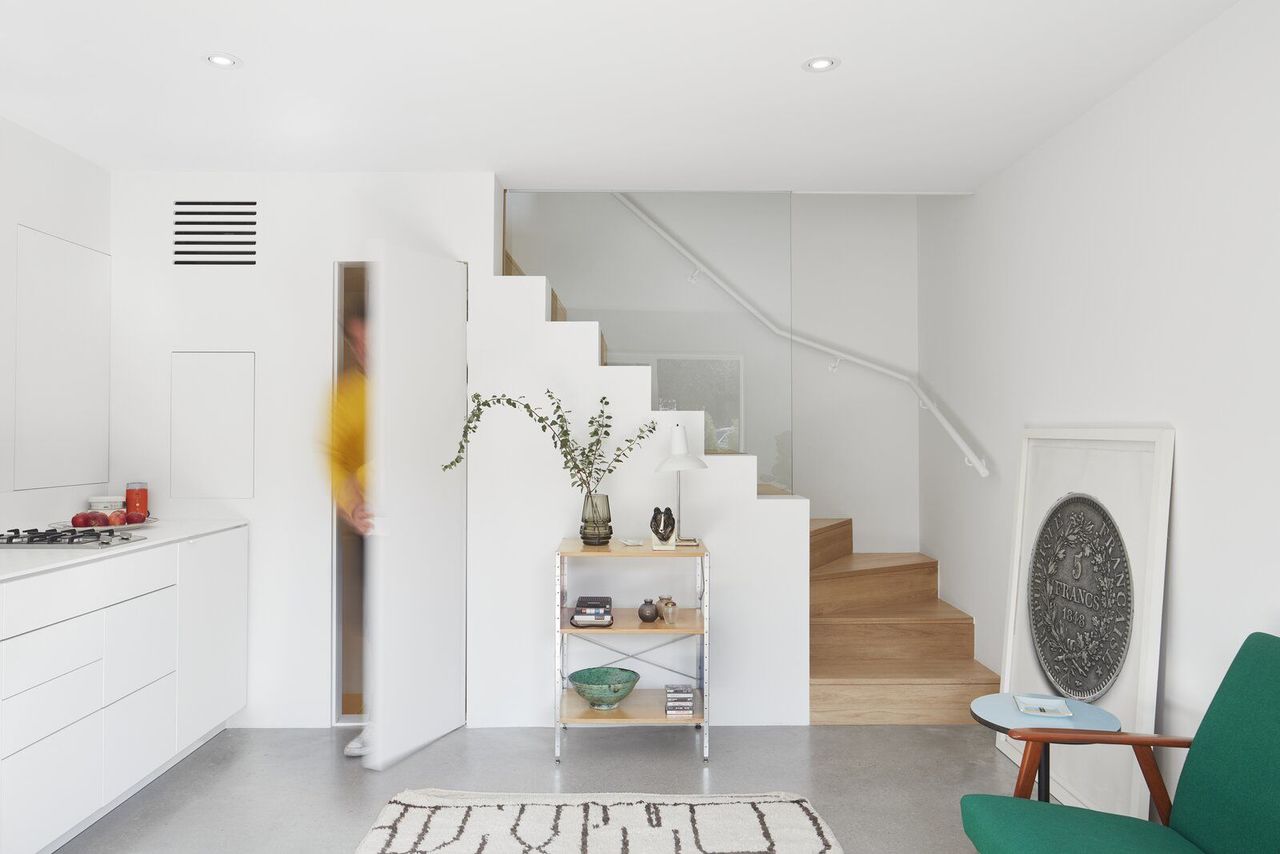 Instead of sourcing and installing registers, air grates were carved into painted MDF for a cleaner look.

Designed as a pied-a-terre for a graphic designer primarily based in Rotterdam, the interiors reflect the homeowner’s affinity for meticulous detail. "He’s a very precise person by nature," says Mitanidis. Streamlined simplicity and clever design solutions define the extremely efficient 600-square-foot space.

On the ground floor, a minimalist galley kitchen with a two-burner stove and mini fridge is perfectly compact. To the right is a tightly wound staircase finished in white oak. "It’s as tight as you can get and still meet code requirements," laughs Mitanidis. Underneath the stairs is a compact bathroom, which features a cheery yellow epoxy floor; Corian lines every other surface to create a grout-free, waterproof room. 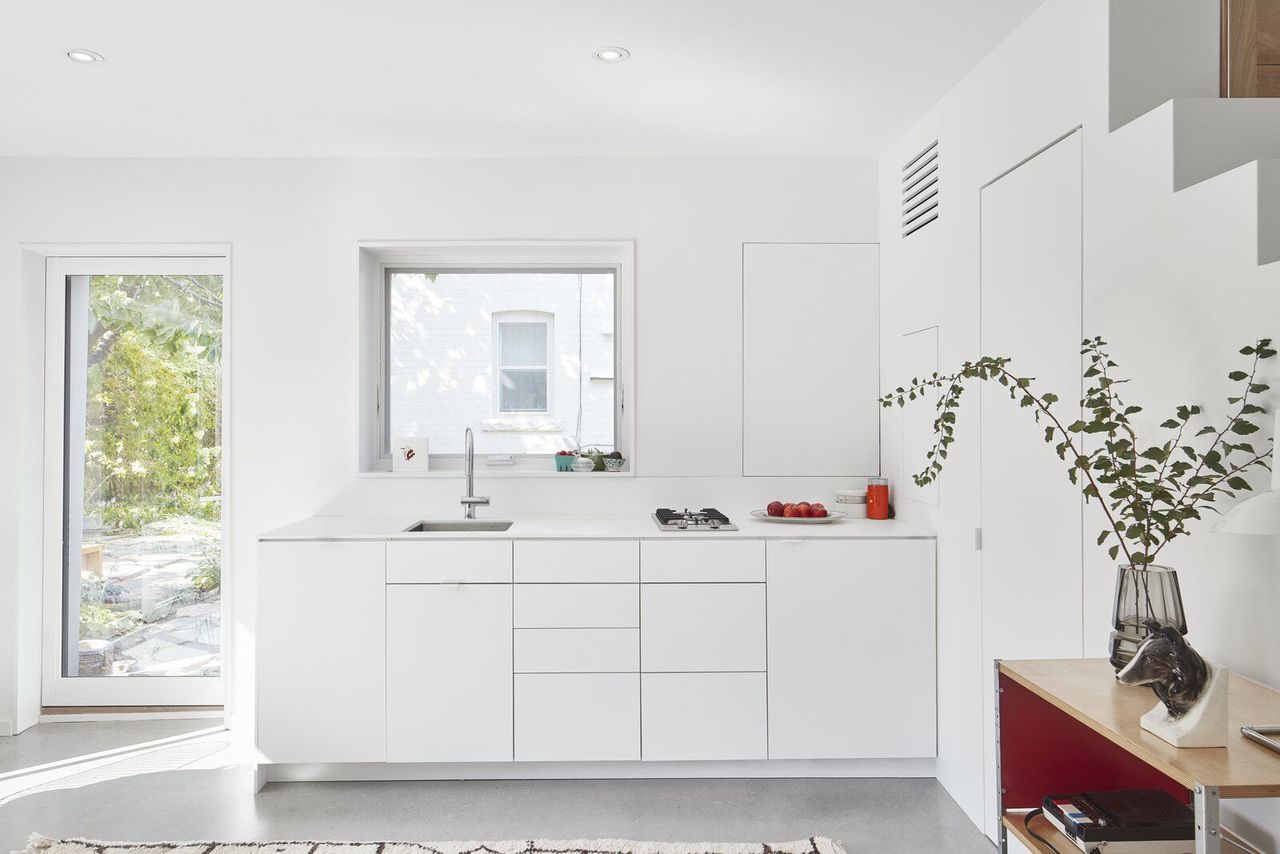 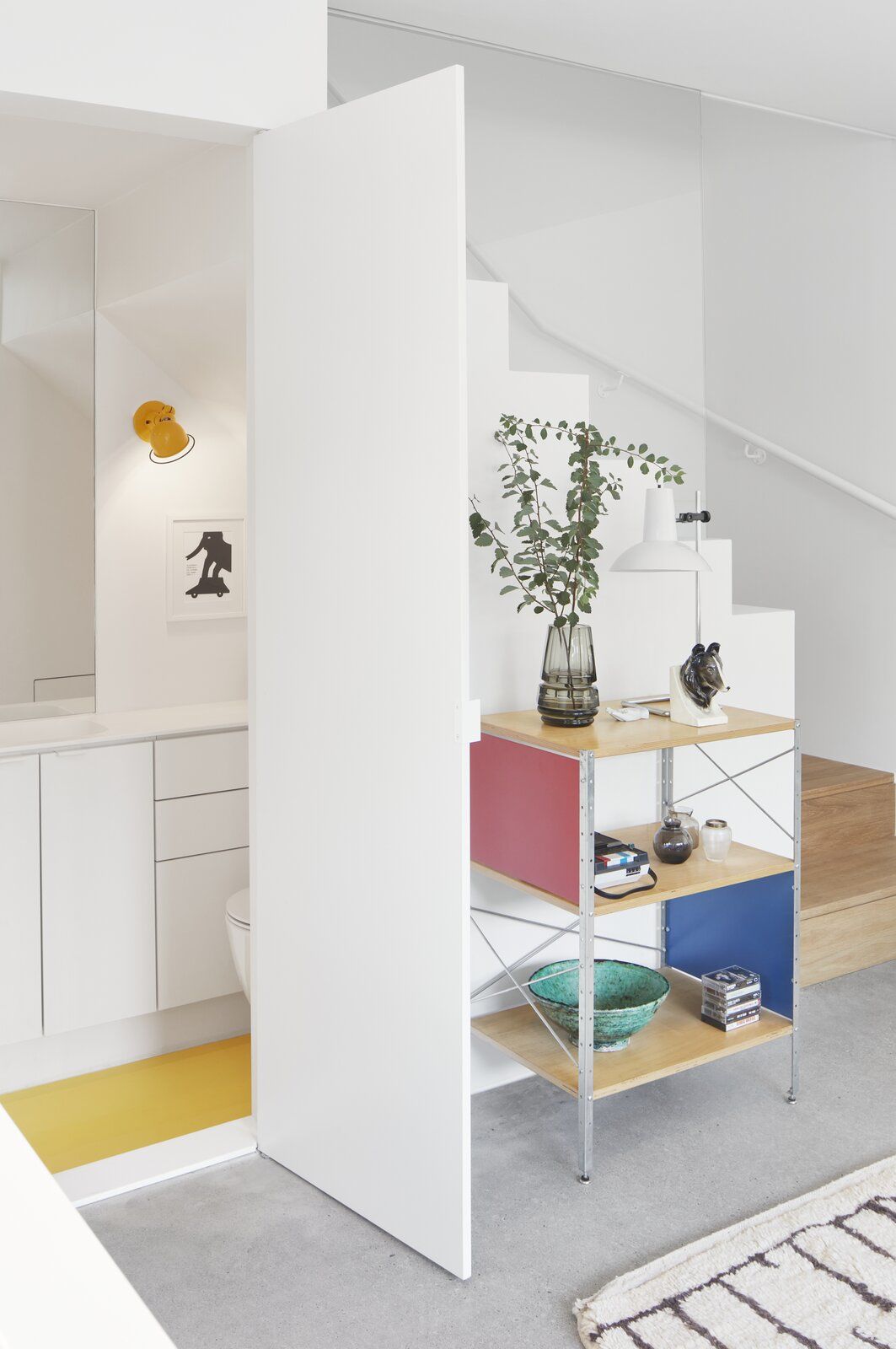 In the bathroom, which is situated under the staircase, a yellow sconce matches the epoxy floor. 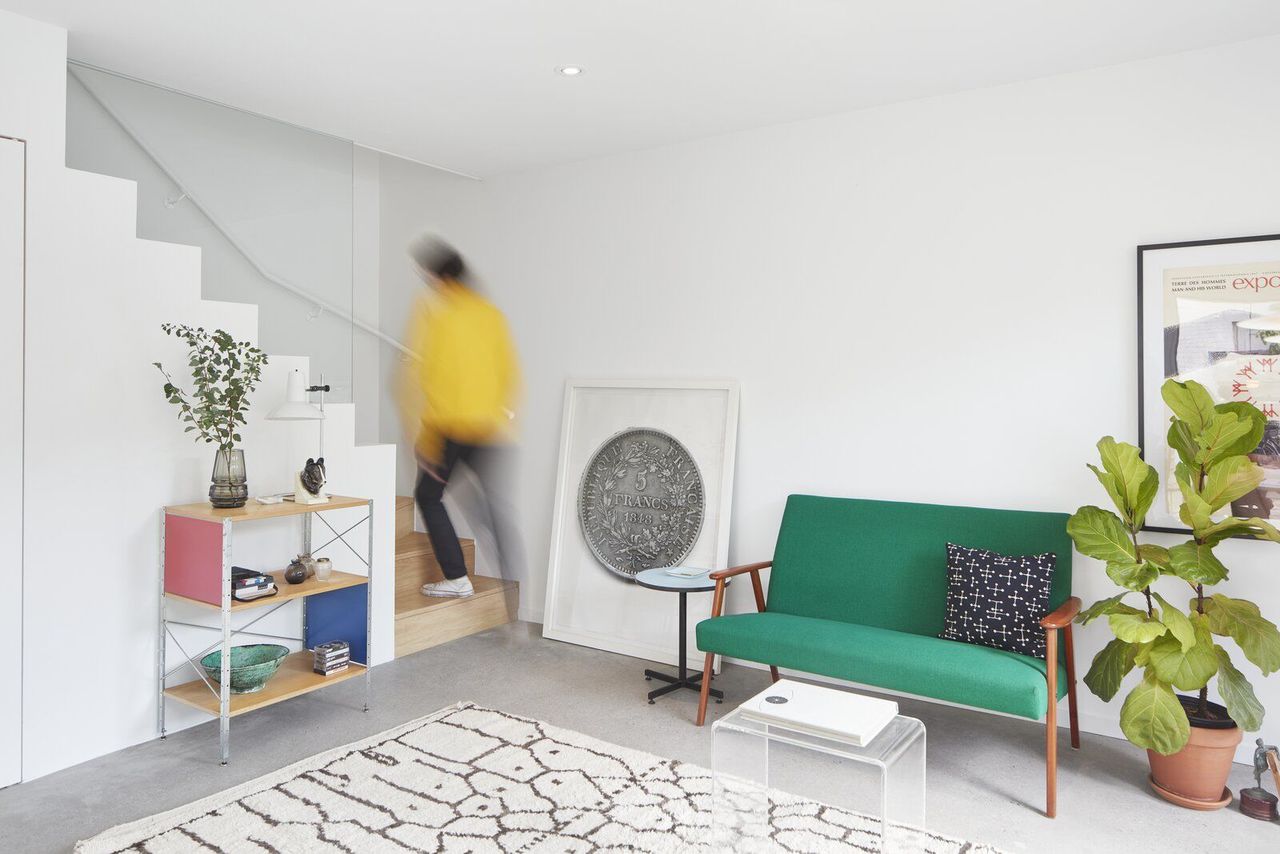 Mitanidis and his team insulated the interior extensively to maximize heat gain and create an energy-efficient building that could feel cozy even through a Toronto winter. Heated concrete floors provide added warmth. 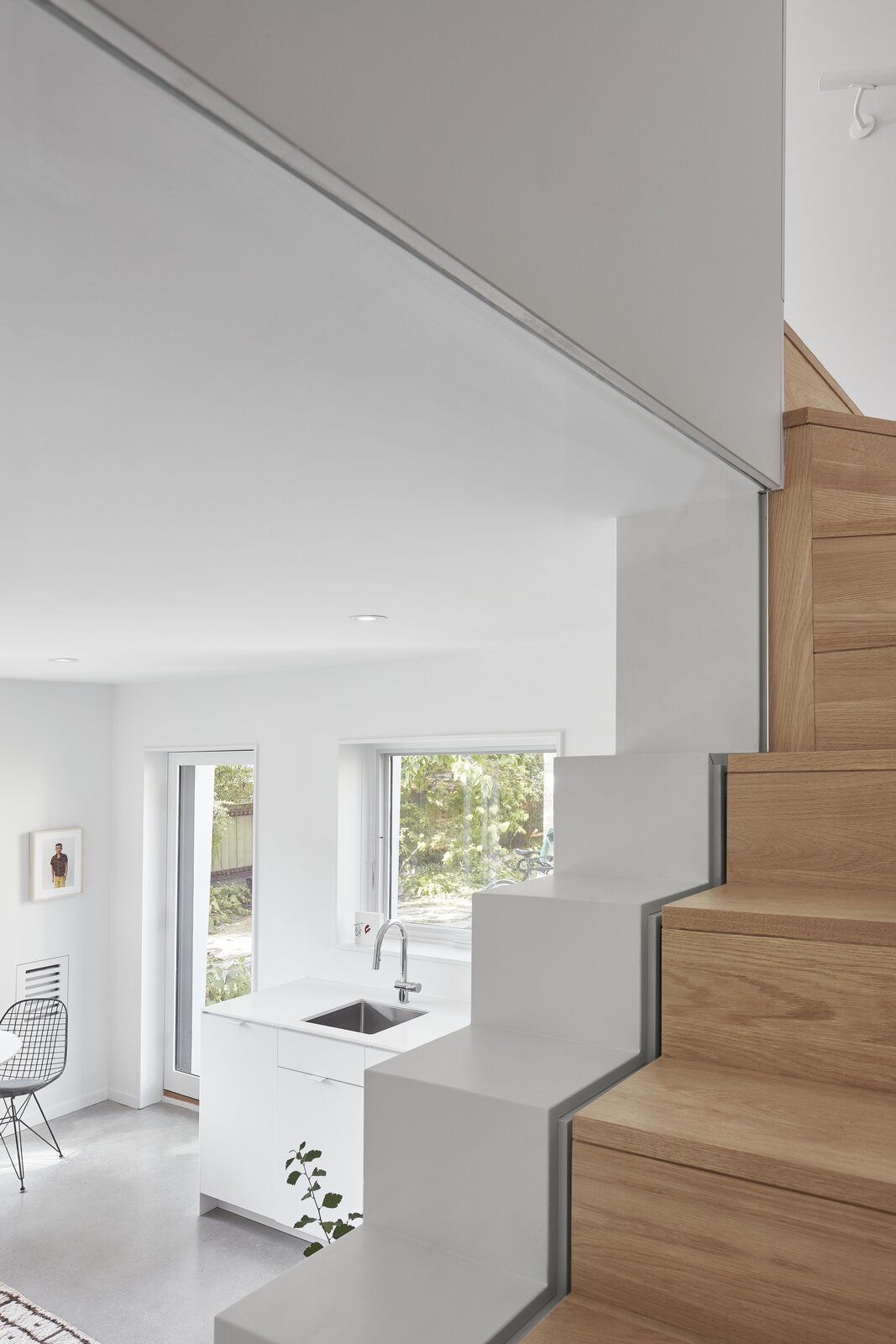 A drywall extension jutting out from the stair treads provides enough space below for the bathroom. 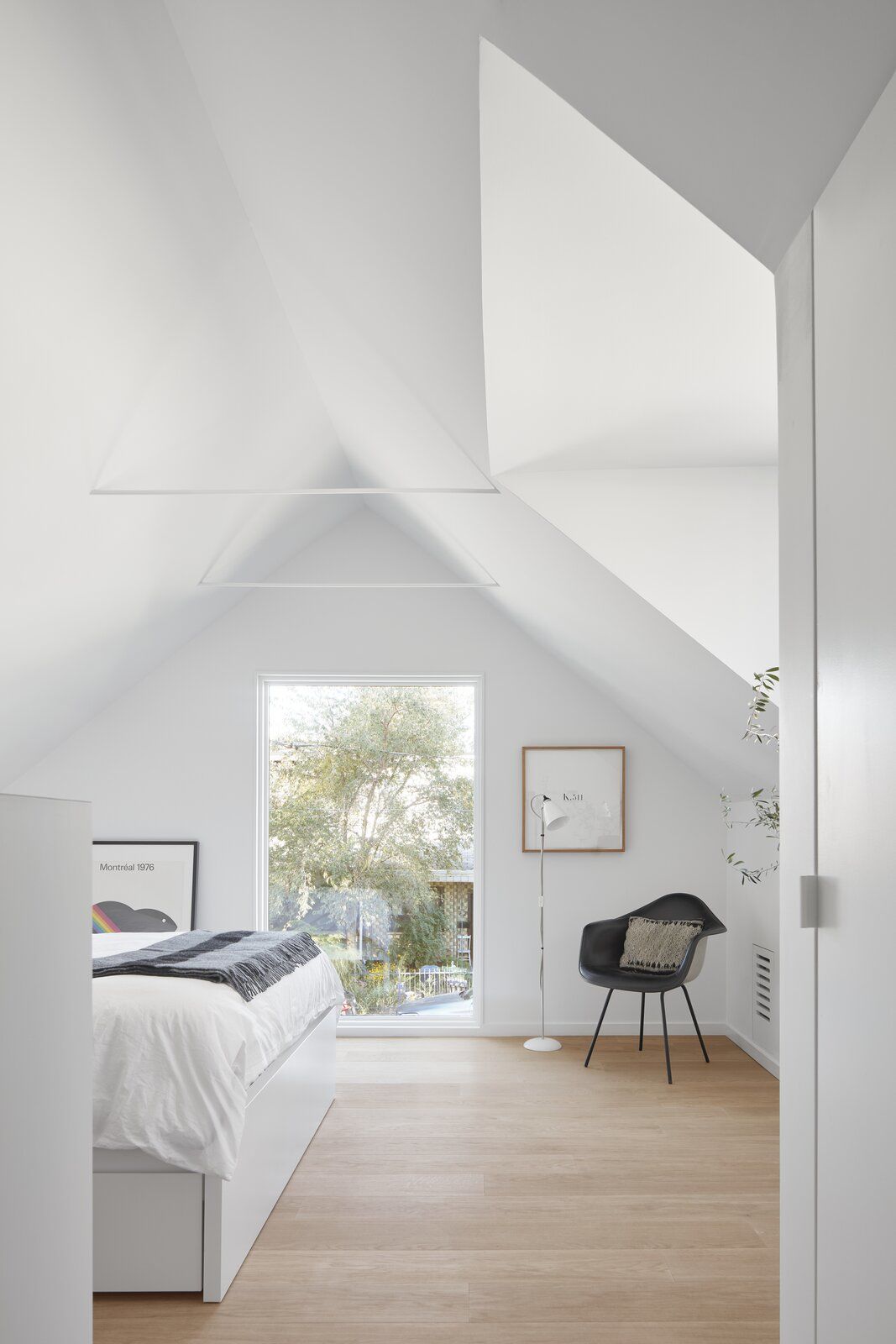 The built-in cabinetry in the lofted bedroom doubles as a safety measure, creating a barrier at the edge of the stairwell. 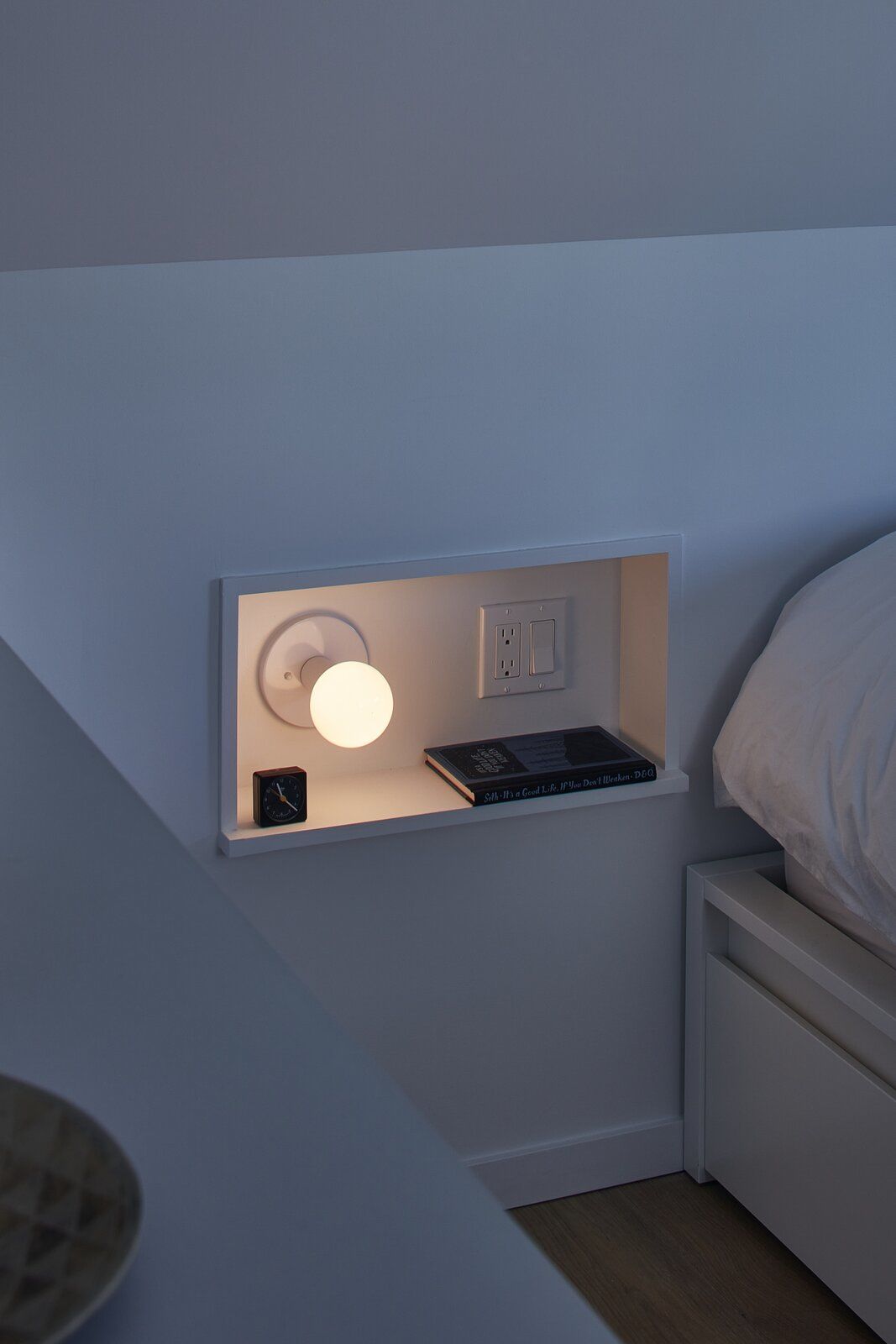 The only furniture in the bedroom is a bed and side chair. Light pours in through an angled skylight and the former hay-bale window that faces the street.

Since the home is only used for short-term stays, storage wasn’t a priority in the design. Still, Mitanidis included some built-in cabinetry. Low-set millwork on the second floor is just tall enough to hang clothes or tuck a suitcase out of sight.

Smooth surfaces and white walls keep the small space feeling open and airy. "We didn’t want too much texture or too many distractions that might make it feel even smaller," says Mitanidis. One side of the building opens up to the main road, and the other to the back garden, allowing natural light to easily flow through the oversized windows. In the bedroom, the window goes right down to the floor; the glass pane fills an opening that once was used to load in hay.

The turn-of-the-century building has seen multiple changes over the years, maintaining a notable presence while struggling to keep pace with the changing neighborhood around it. "It used to be this kind of mysterious box that nobody could penetrate," says Mitanidis. "Now it feels like it just brings warmth to the street and draws you in."