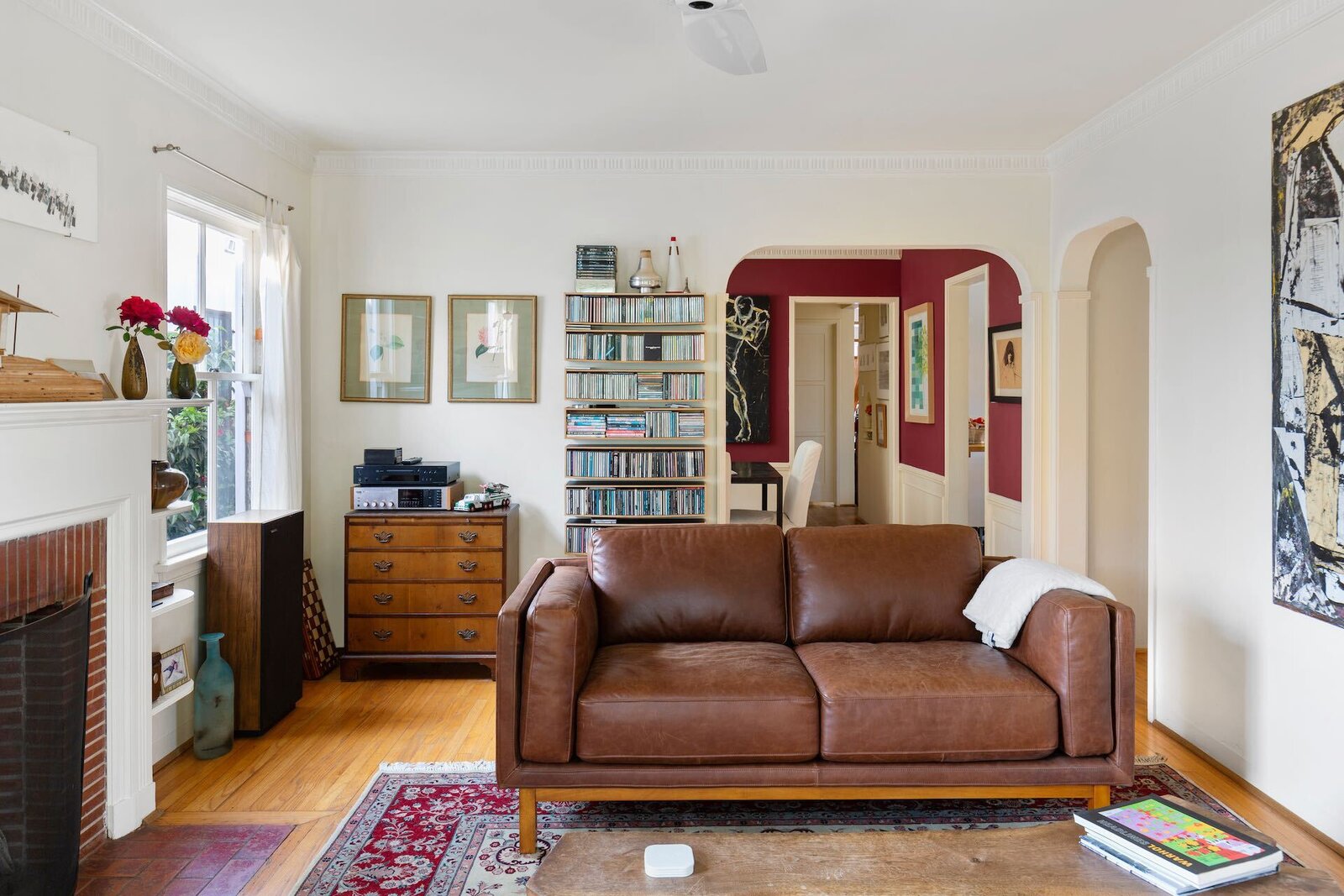 The founder of Studio Nova A Architects redesigned the 1941 bungalow into a bright oasis for his family.

Acclaimed architect Stuart Magruder and his partner, Emily, are looking to part ways with their eye-catching Los Angeles home. After acquiring the dwelling in 2003, the founder and principal of Studio Nova A Architects revamped the space into a four-bedroom retreat for his growing family. 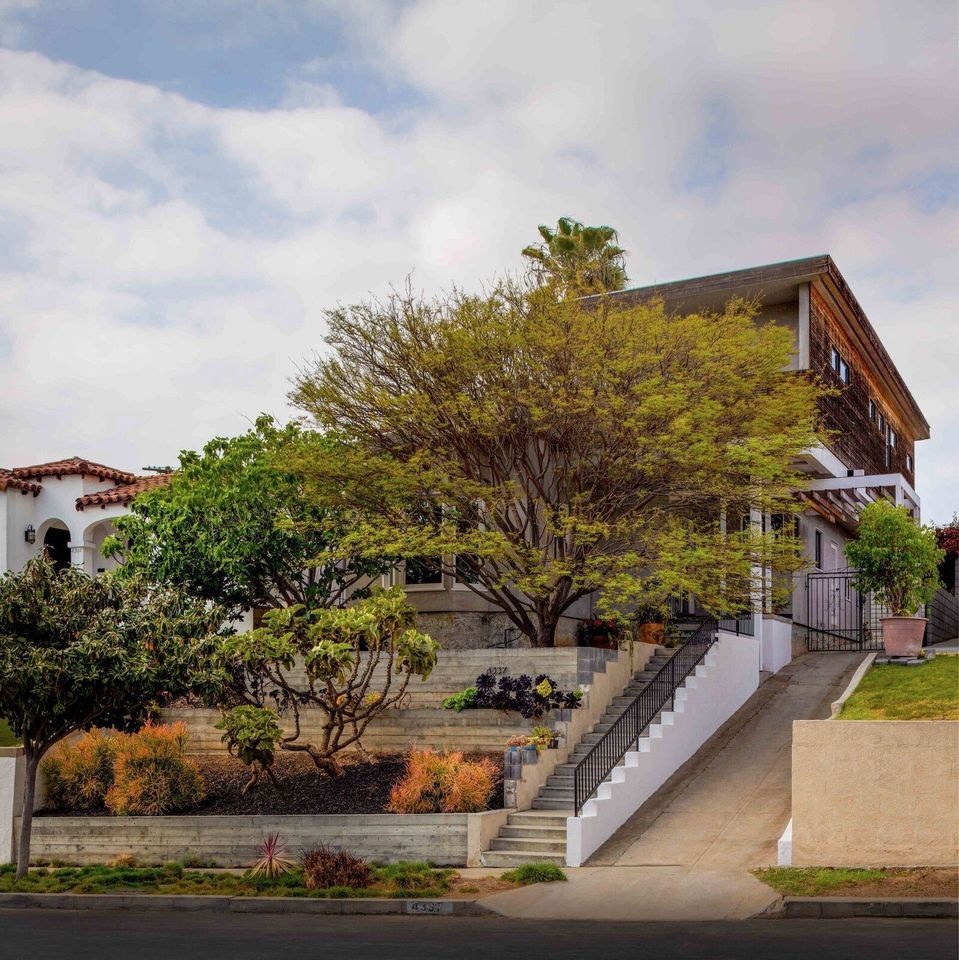 The home’s elevated position and verdant front garden create a sense of seclusion for residents.

The 1941 California bungalow is perched 14 feet above the sidewalk and nestled behind mature trees in the tiered front yard. To maximize the views from the residence, the architect added a second level to the structure, which gently rests on the dwelling’s original frame. "The design of the house sprang from the site," the architect says. "Now, the home appears as two rectangles that share one side." An entryway leads to the family room, which boasts large bay windows and period details.

The first level houses the primary gathering areas, including the chef’s kitchen and cozy family room, both of which provide direct access to the home’s private outdoor area. "The renovation brought the backyard into the house," Emily explains. "Through the door in the den, you can see the many fruit and avocado trees, which pop against the blue sky." In addition to the living areas, the first floor also features a bedroom and a bathroom that were original to the home. 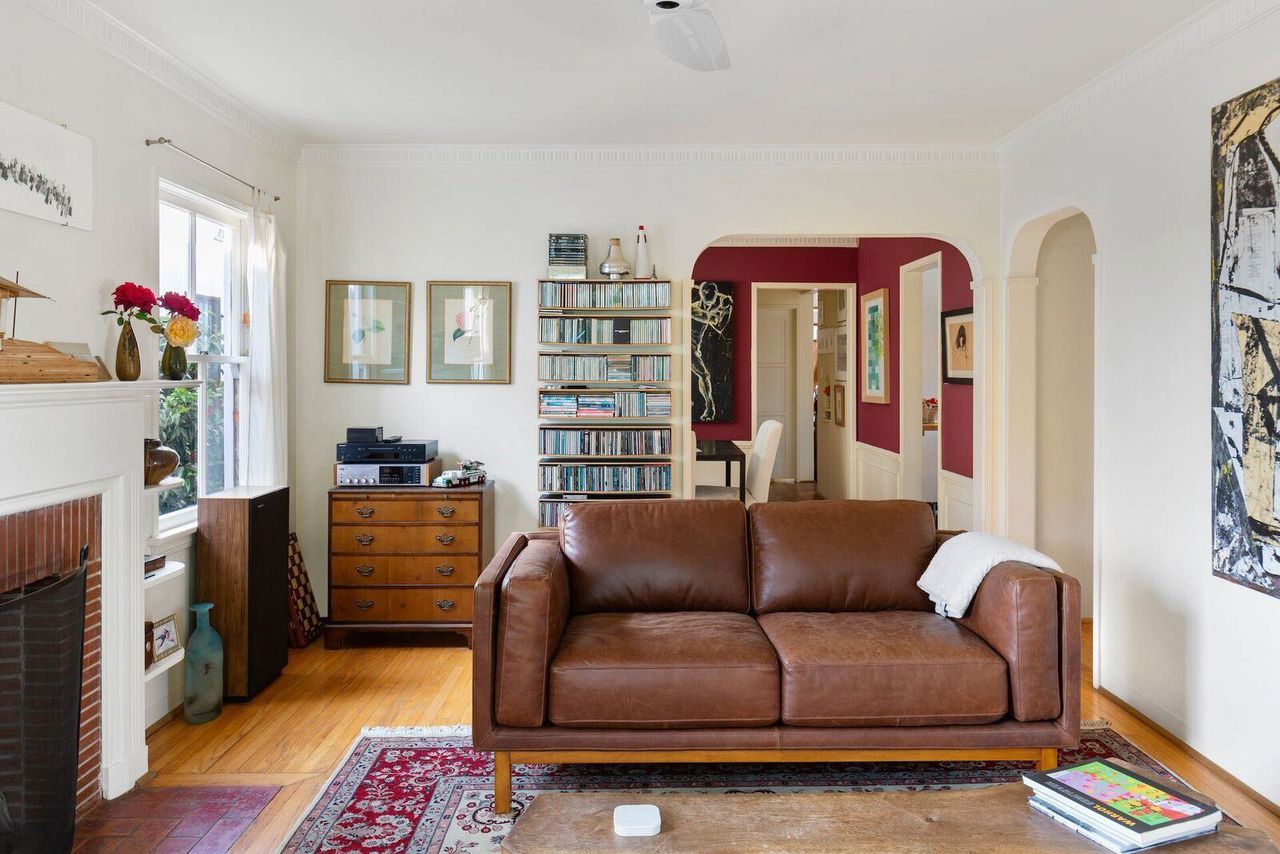 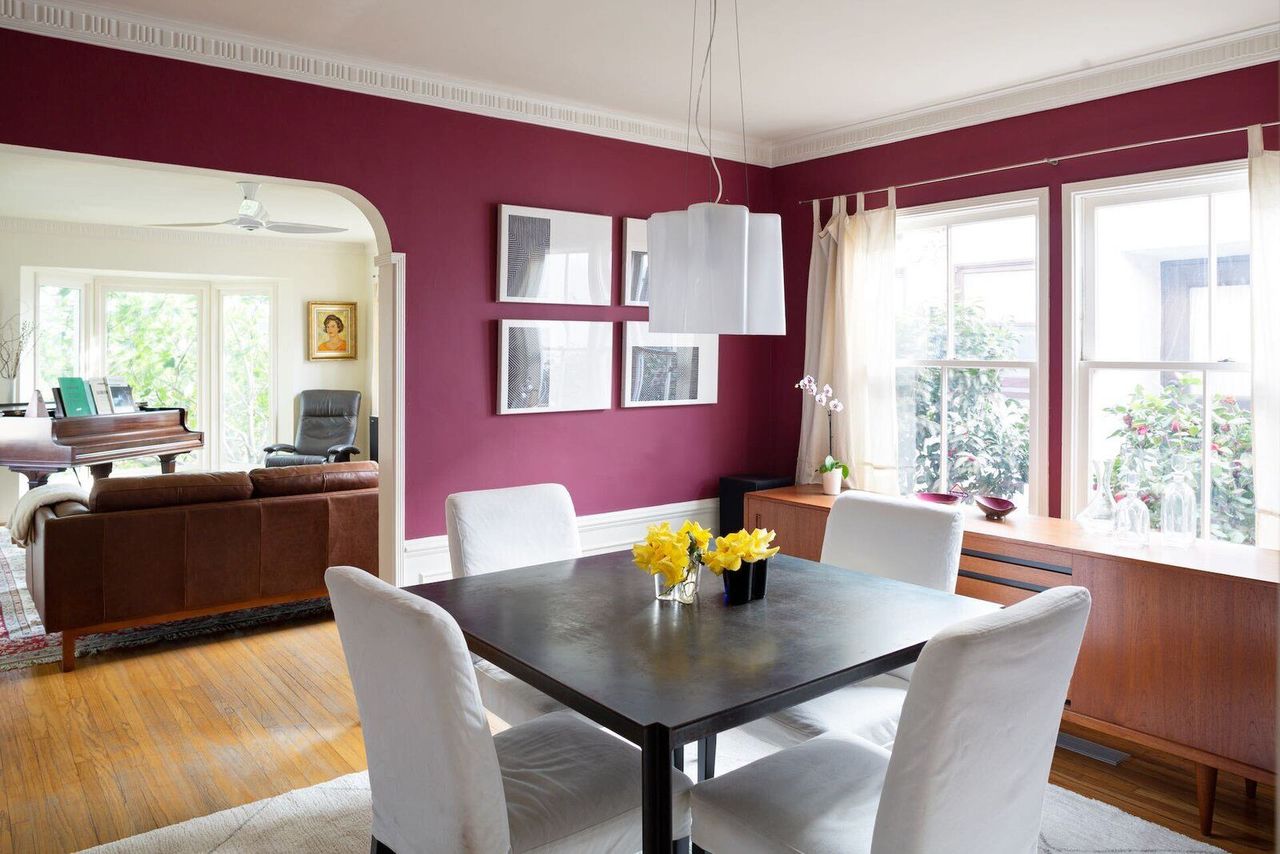 Original molding lines the dining room and enriches the space with original character.

A minimalist staircase leads to the home’s second floor addition, which presents three bedrooms and two baths. The primary suite offers a walk-in closet, en suite bathroom, and sweeping views of the city skyline. From the connected terrace, it’s also possible to see Palos Verdes and Catalina Island in the distance. 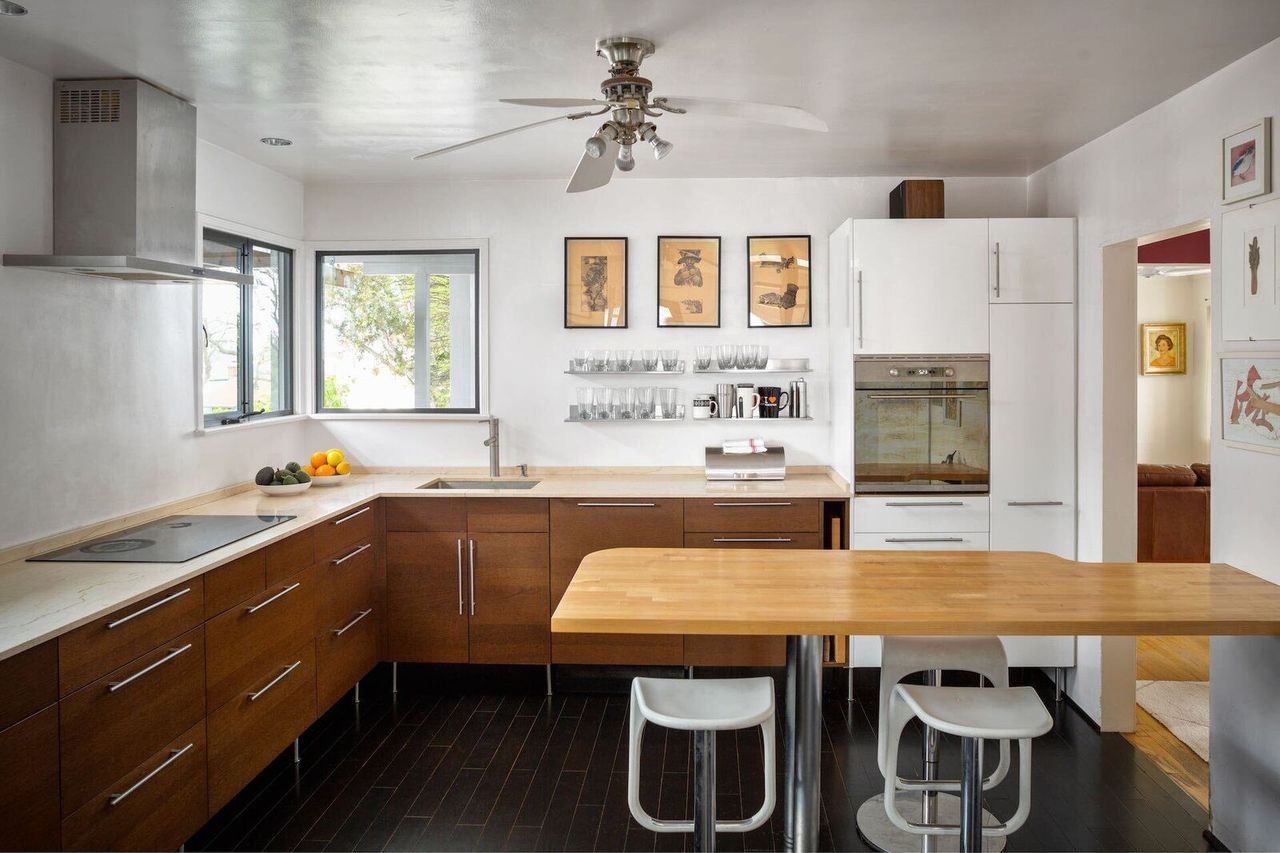 "The light and views upstairs create a sense of expansiveness," Emily says. "From the bedroom, on clear nights, you can see the moon rise in the east and set in the west before morning." 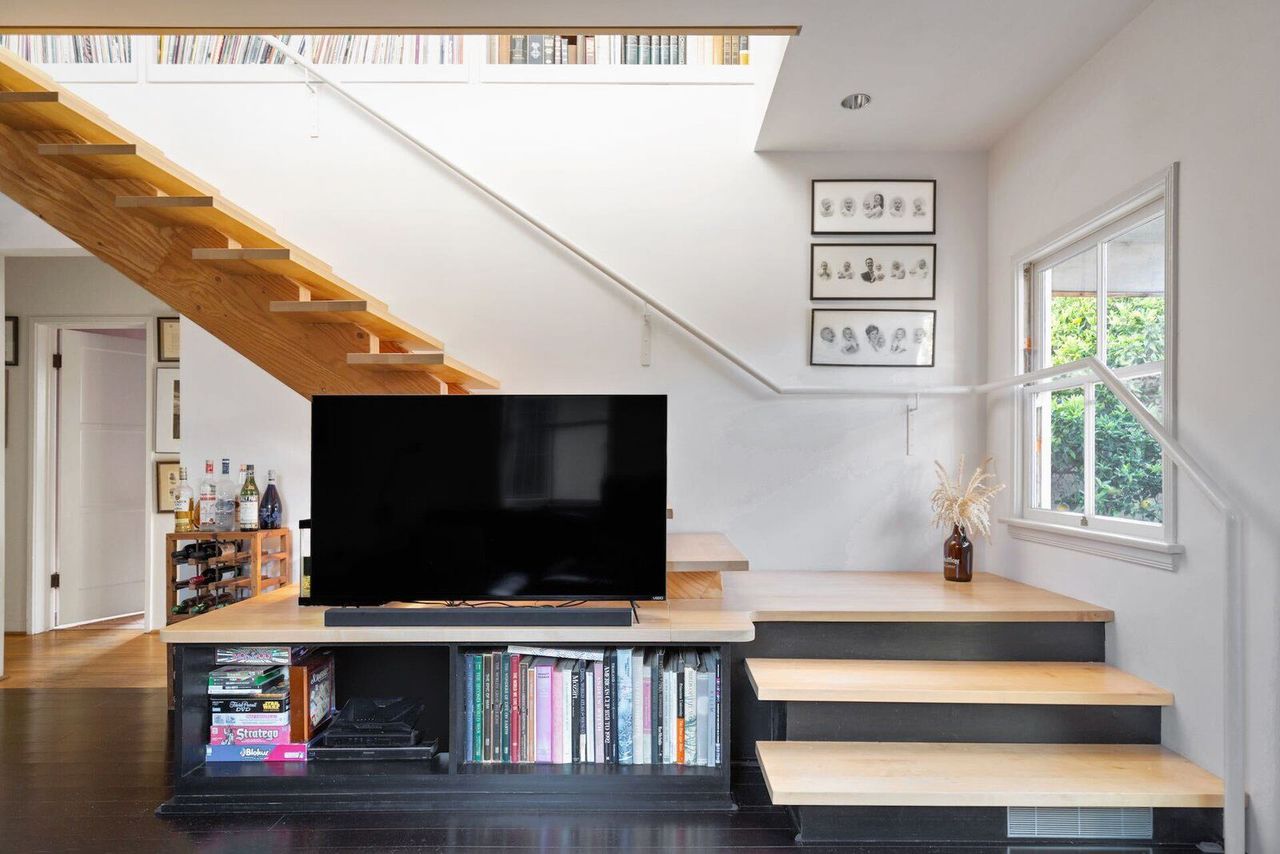 The backyardขwhich the architect notes as one of his favorite aspects of the home—offers a thriving rose garden, as well as a dining area, custom play structure, and office (with plans available for ADU expansion). "There is plenty of space for two rambunctious kids to play," Stuart jokingly adds. Scroll ahead to see more of the 2,127-square-foot renovated bungalow, which is currently listed for $1,299,000. 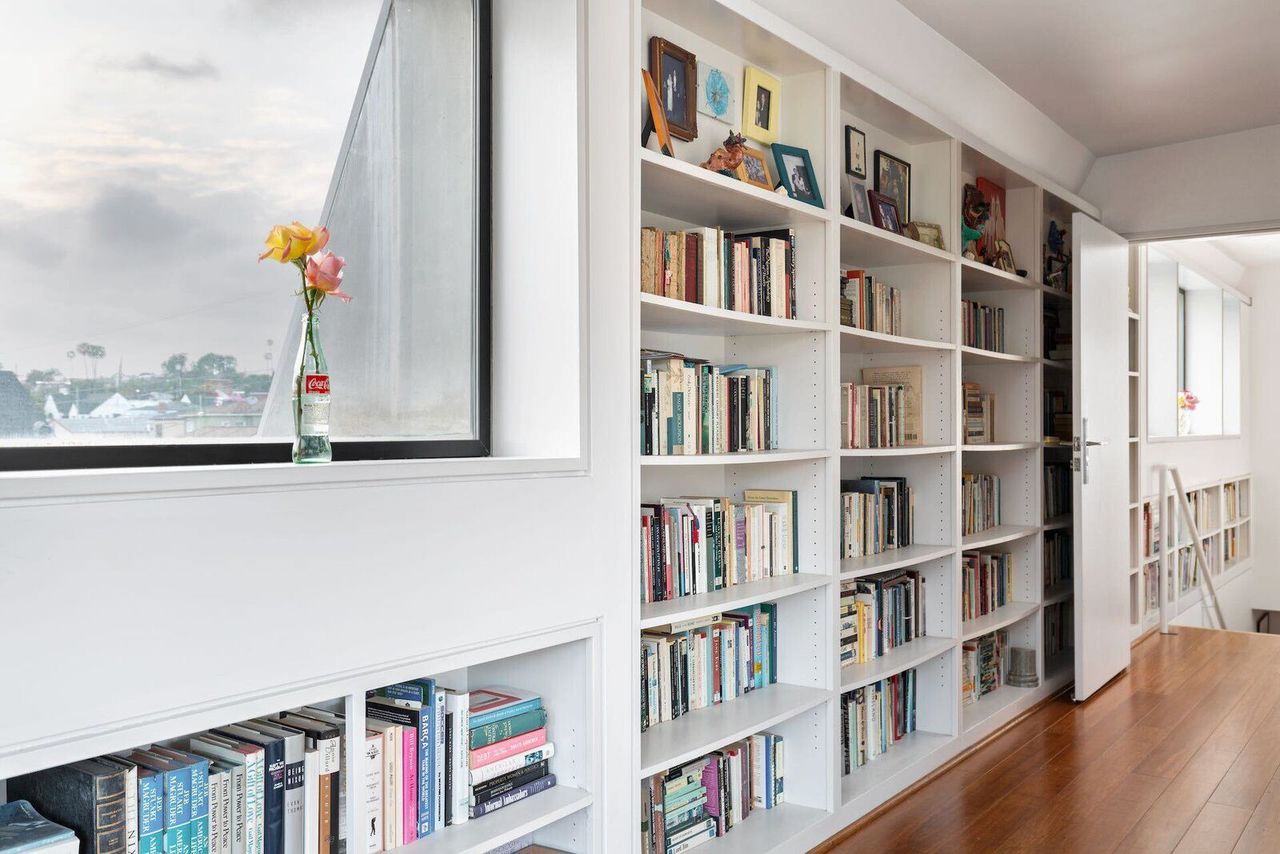 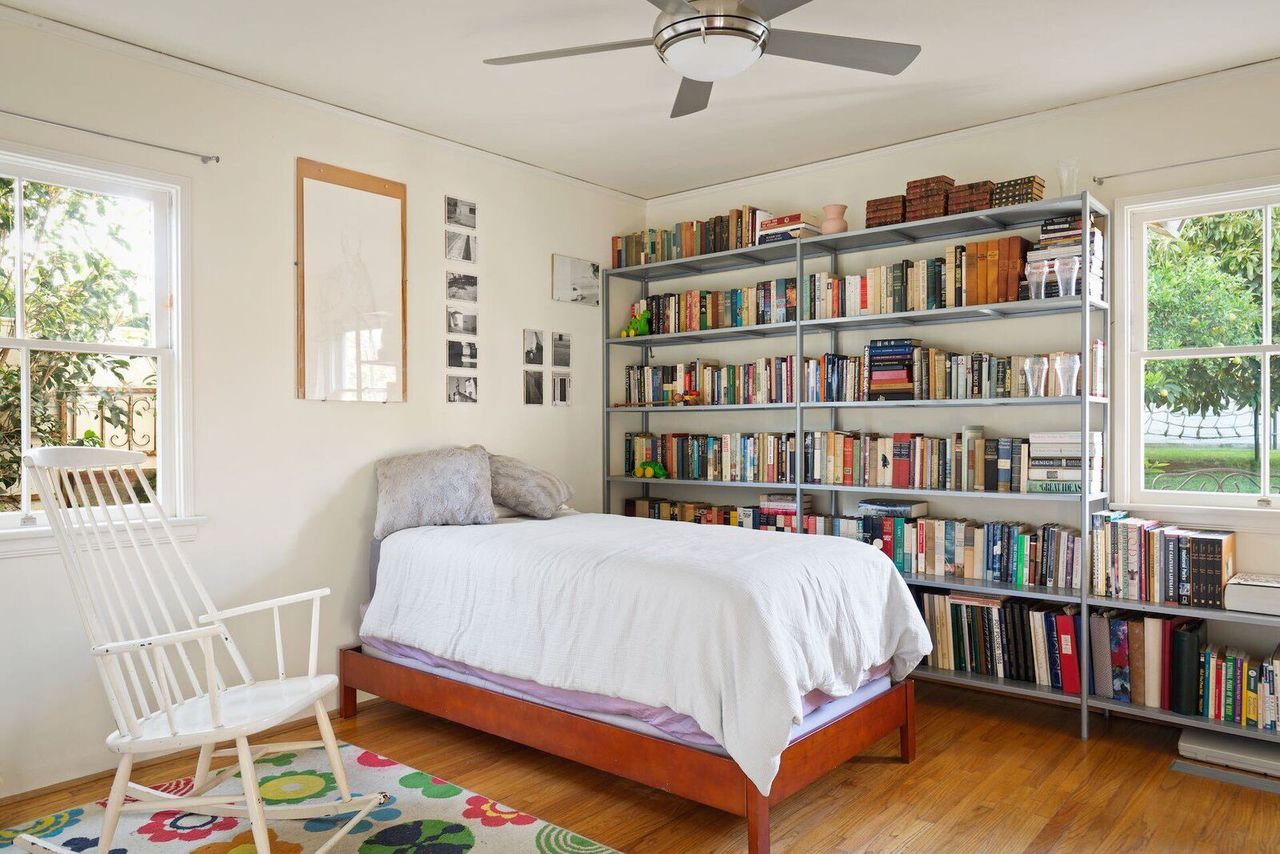 Open shelving continues into the bedrooms, offering plenty of space for residents to display collected memorabilia. Hardwood floors can also be found throughout the two-level home. 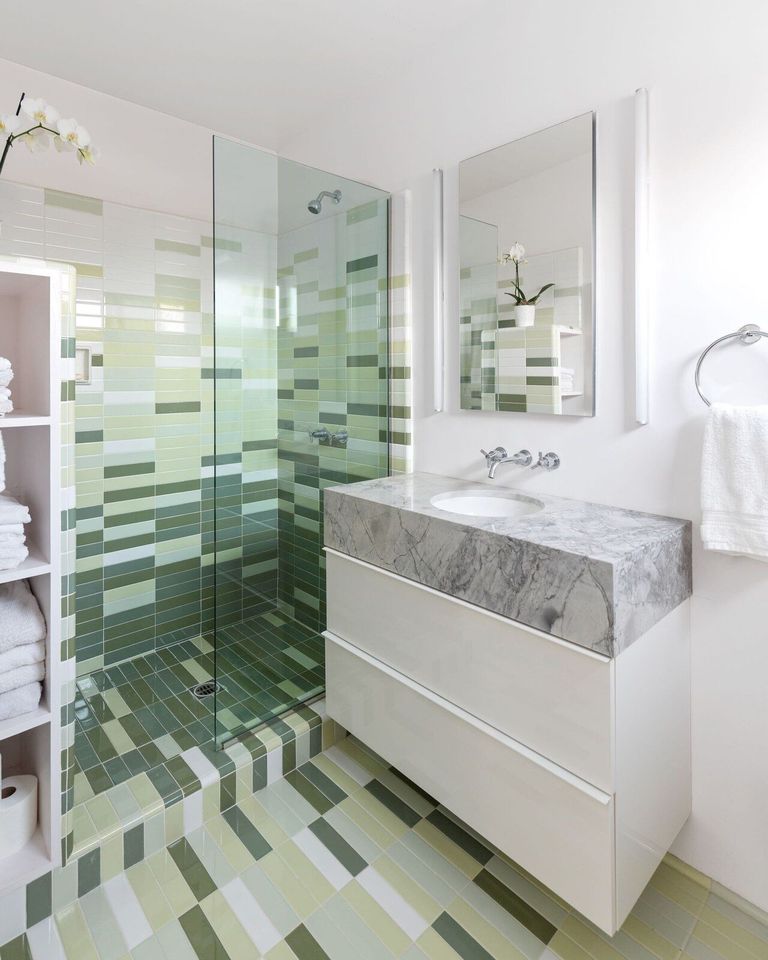 The renovated bungalow includes three bathrooms-two of which are located upstairs. Both bathrooms on the second level feature marble countertops, as well as a custom tile layout. 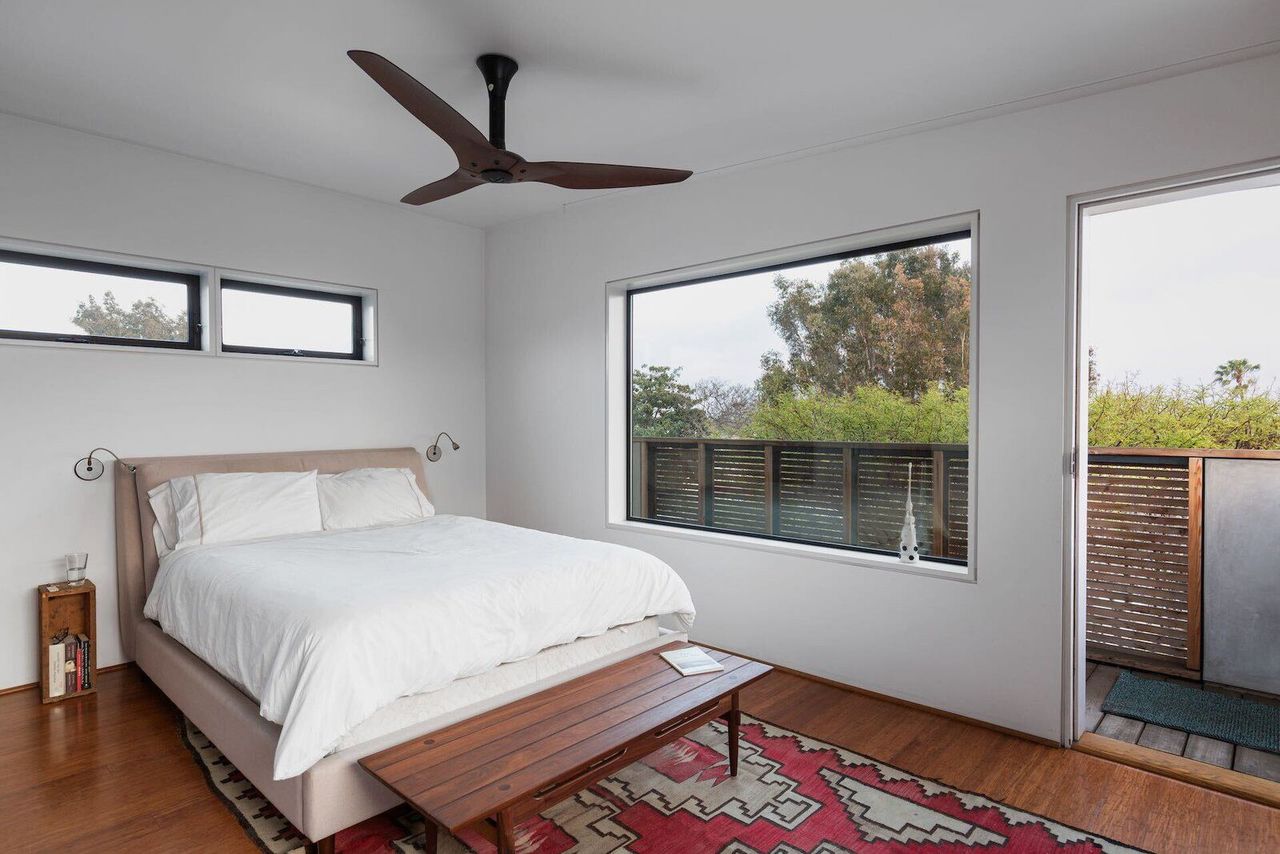 The primary suite includes a private terrace, as well as east-, south-, and west-facing windows. 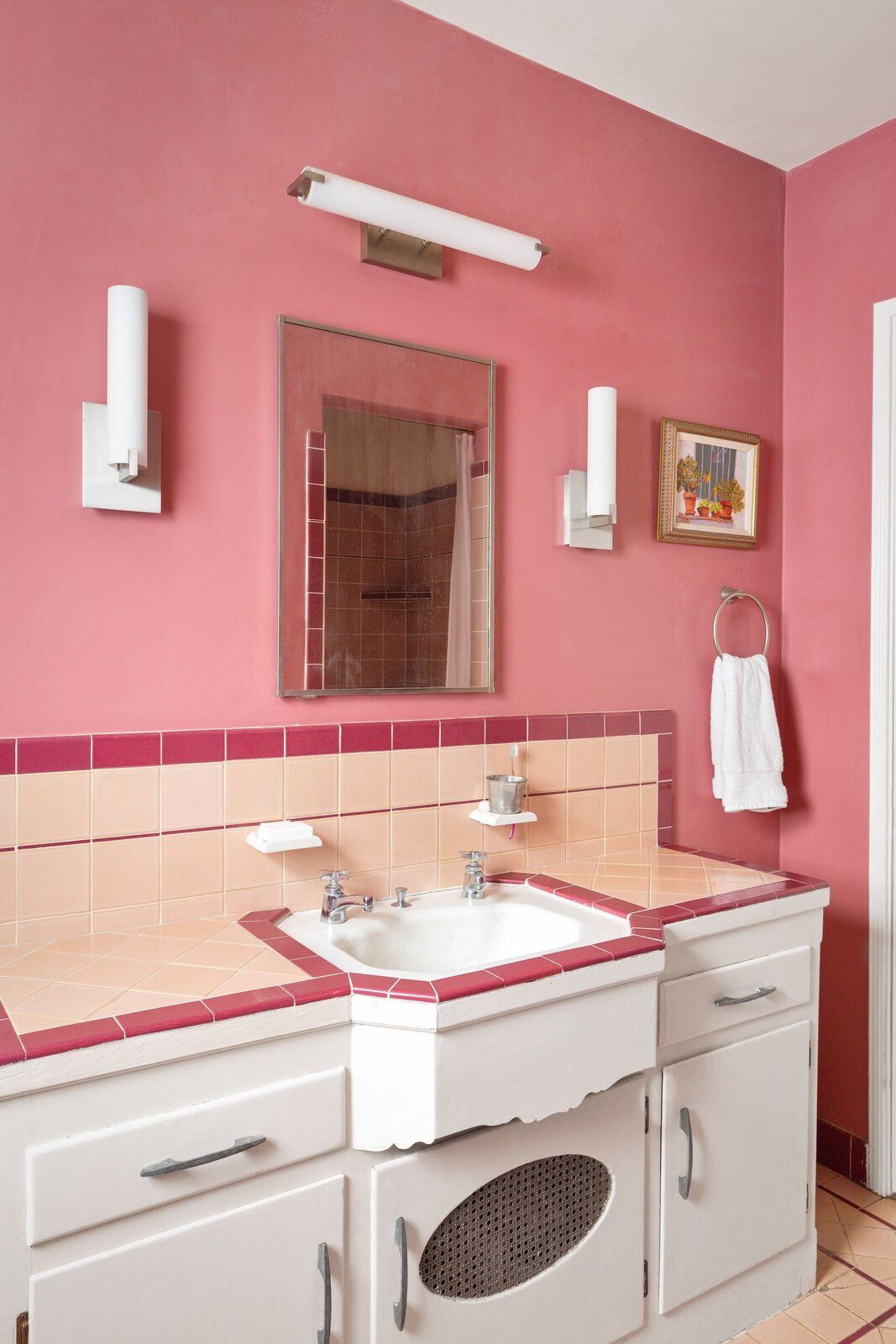 The first-level bathroom is dressed in original tile, which adds a playful burst of color. 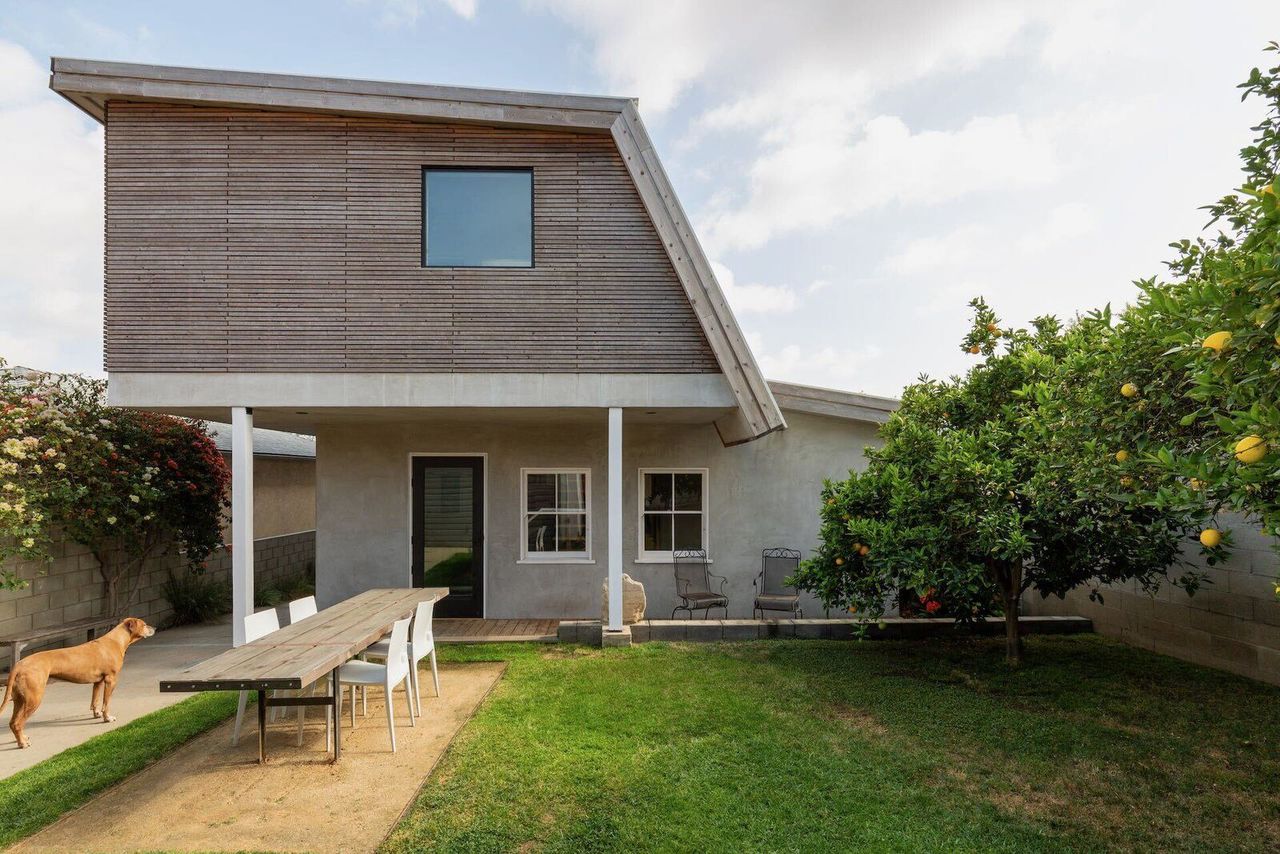 The view from the backyard showcases the home’s contemporary second-story addition.