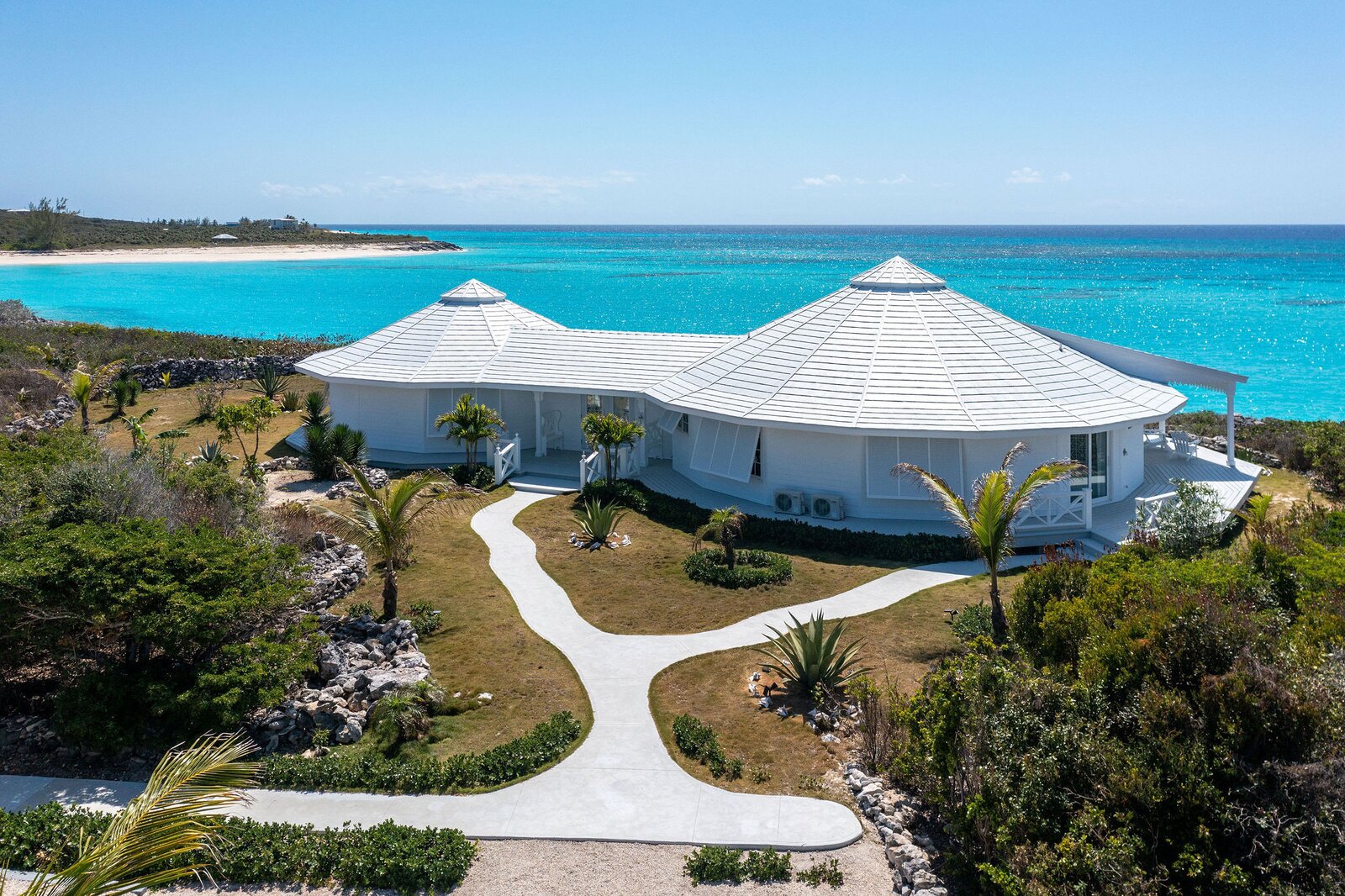 After withstanding a hurricane, an oceanside round house in the Bahamas becomes a swoon-worthy getaway.

After years of fantasizing about living near the ocean, outdoor enthusiast Jenny Strombom and her partner finally found an idyllic spot to make it happen: on the remote edge of San Salvador Island, where they purchased a 2-year-old round house with plans to eventually expand it. "It was the obvious place to settle," she says. "The area gleamed with perfection and presented a calm, revitalizing environment to restore our energy levels and live in symbiosis with nature." 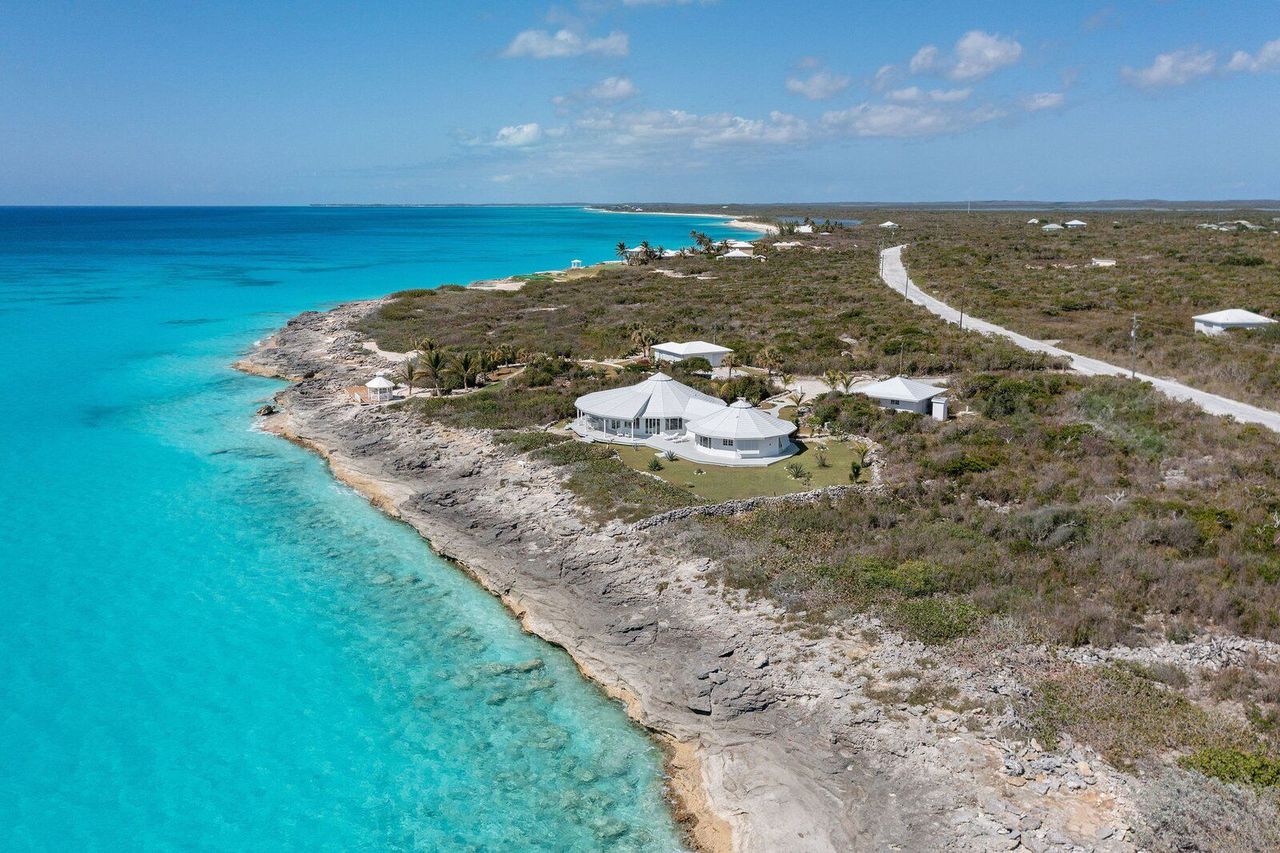 This chic Deltec prefab rests snugly on the rocky shore of San Salvador Island in the Bahamas.

The couple bought the home more for its location than its architectural typology, but felt even better about their decision when the previous owners mentioned the safety of circular homes during hurricanes-something the couple would discover firsthand much sooner than expected. 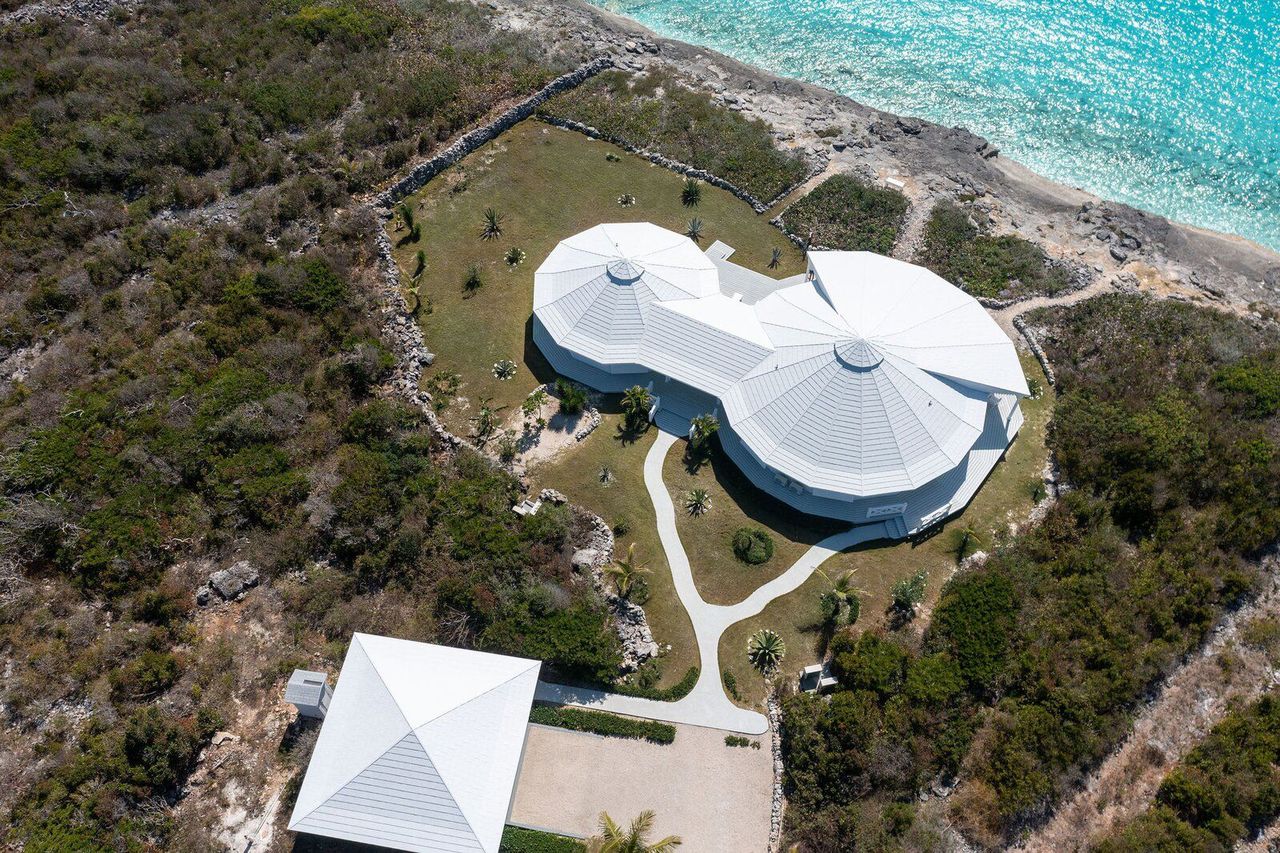 The smaller circular unit (left) was originally built in 1999. After purchasing the property in 2014, Jenny and her partner expanded the home by adding a larger volume (right).

One year later, category four storm Hurricane Joaquin hit the island, wrecking most structures. "The scenes were devastating," says Jenny. "So many buildings were were either partially or fully destroyed, but our home remained structurally intact." 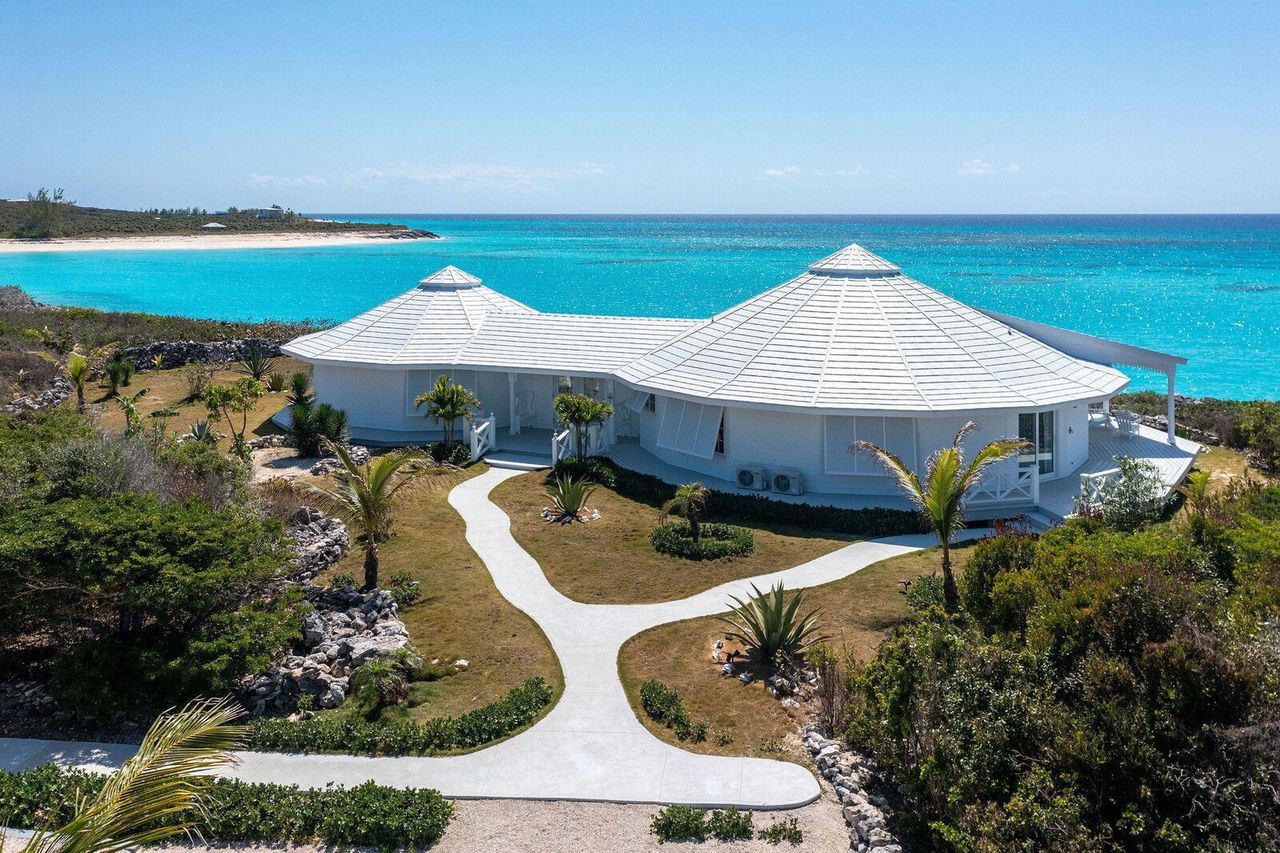 The expansion presented an opportunity for the couple to build a biophillic home that’s in complete harmony with nature and that blends into its surroundings.

It was around this time that the couple discovered their home was a Deltec prefab, and they appreciated the structure’s resiliency. When it came time to begin work on their expansion, they turned to the same North Carolina–based company, known for its durable, hurricane-resistant designs. 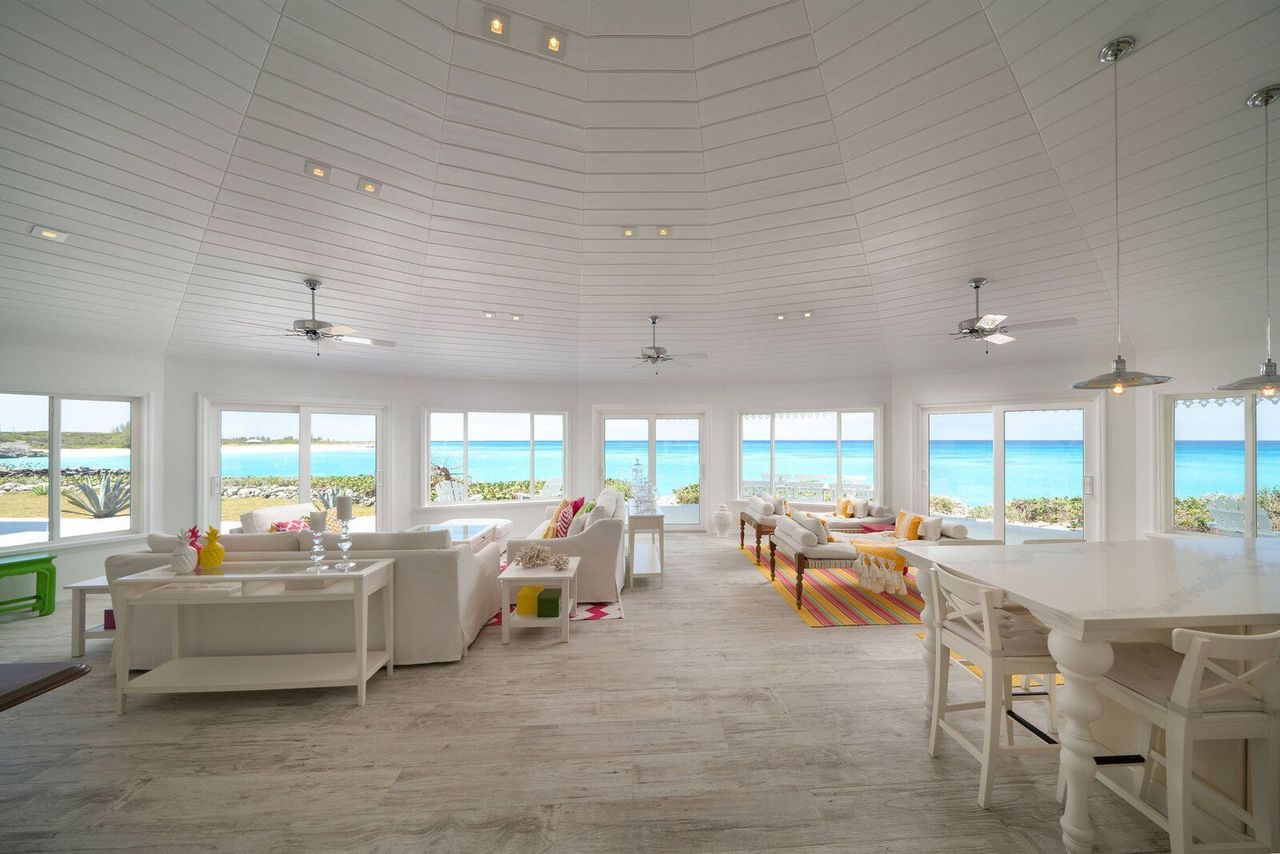 Abundant windows and sliding glass doors offer 240-degree ocean views. "The effect is astounding," says Jenny. "It feels like looking into an aquarium." 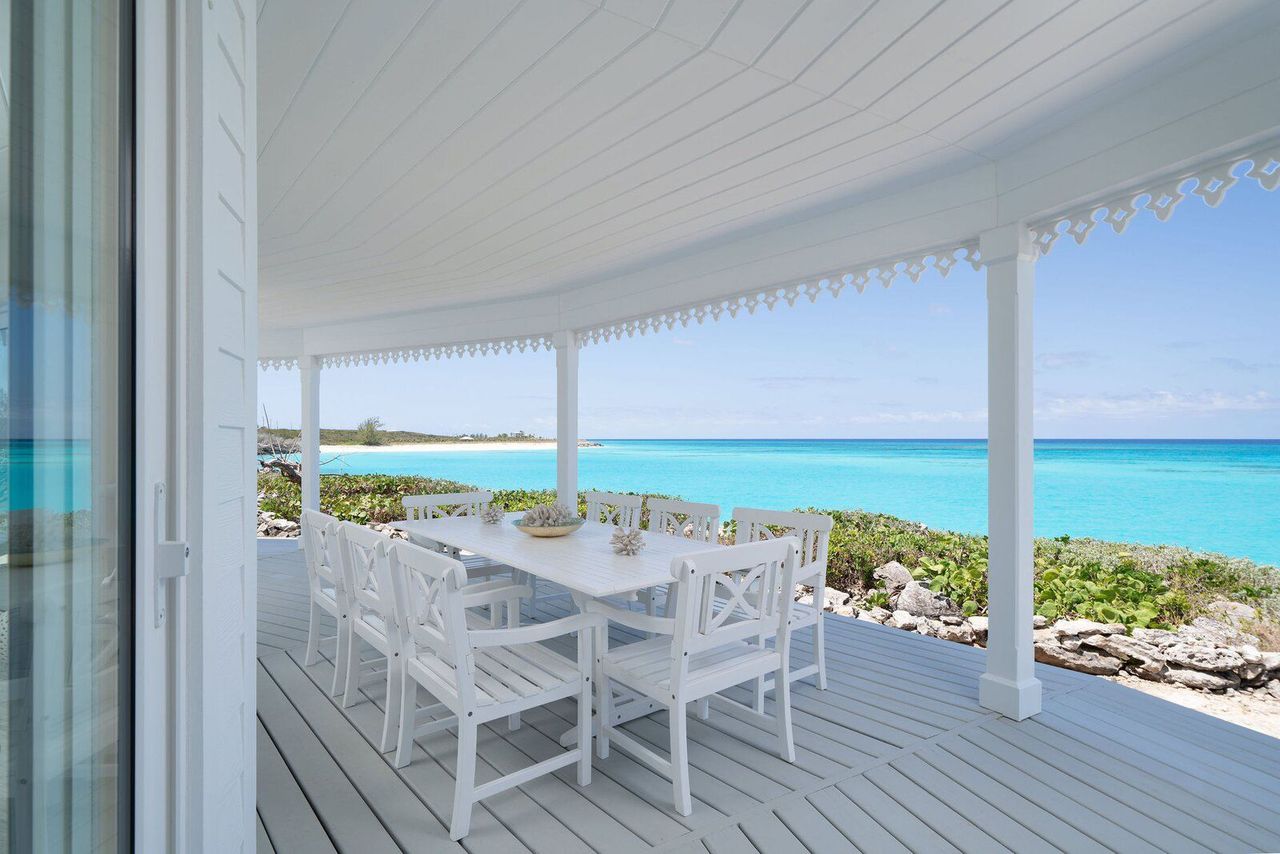 A partially covered deck wraps around the home’s ocean-facing facade.

The couple decided to expand the home by adding on a larger circular volume and detached garage. "We wanted to keep one area for the main bedroom and bath, and another for the living spaces and guest quarters." Linking the two structures allowed the couple to maintain separate but connected quarters. 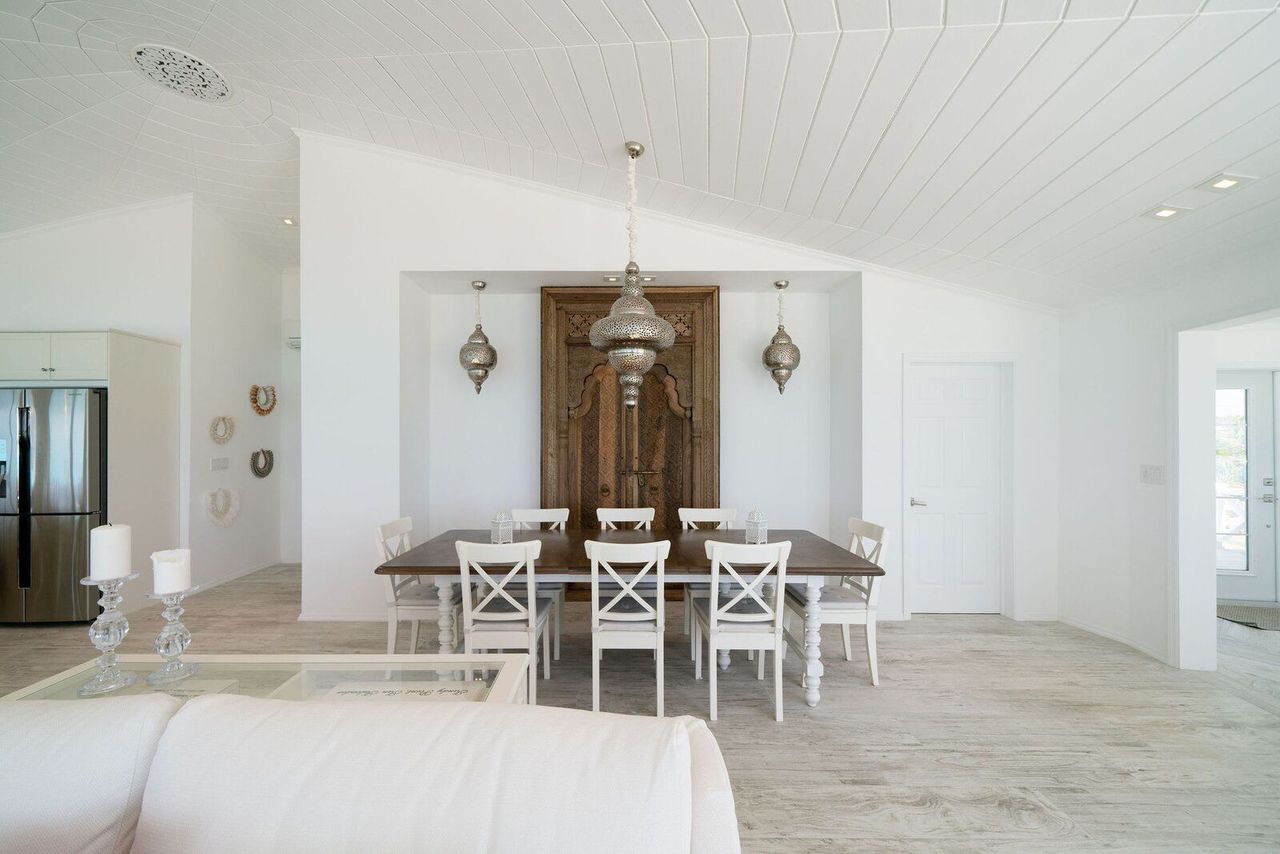 The couple’s extensive world travels influenced much of the home’s interior design. "One of my favorite pieces is the large wooden door I commissioned from an artisan in Jaipur," says Jenny.

Protection from weather was a priority, but they also wanted the home to be visually interesting. "An advantage of Deltec’s design is being able to customize spaces using materials you know are both durable and beautiful," says Jenny. For the exterior, the owners specified the same windows, siding, and metal roofing for visual cohesion. Its crisp, all-white facade pops against the glistening turquoise water, located just steps away.

We move around in the house depending on the hour of the day-sometimes to follow the sun, sometimes to get away from it," says Jenny. "To see the breadth and beauty of the Caribbean Sea everywhere you look is just incredible." 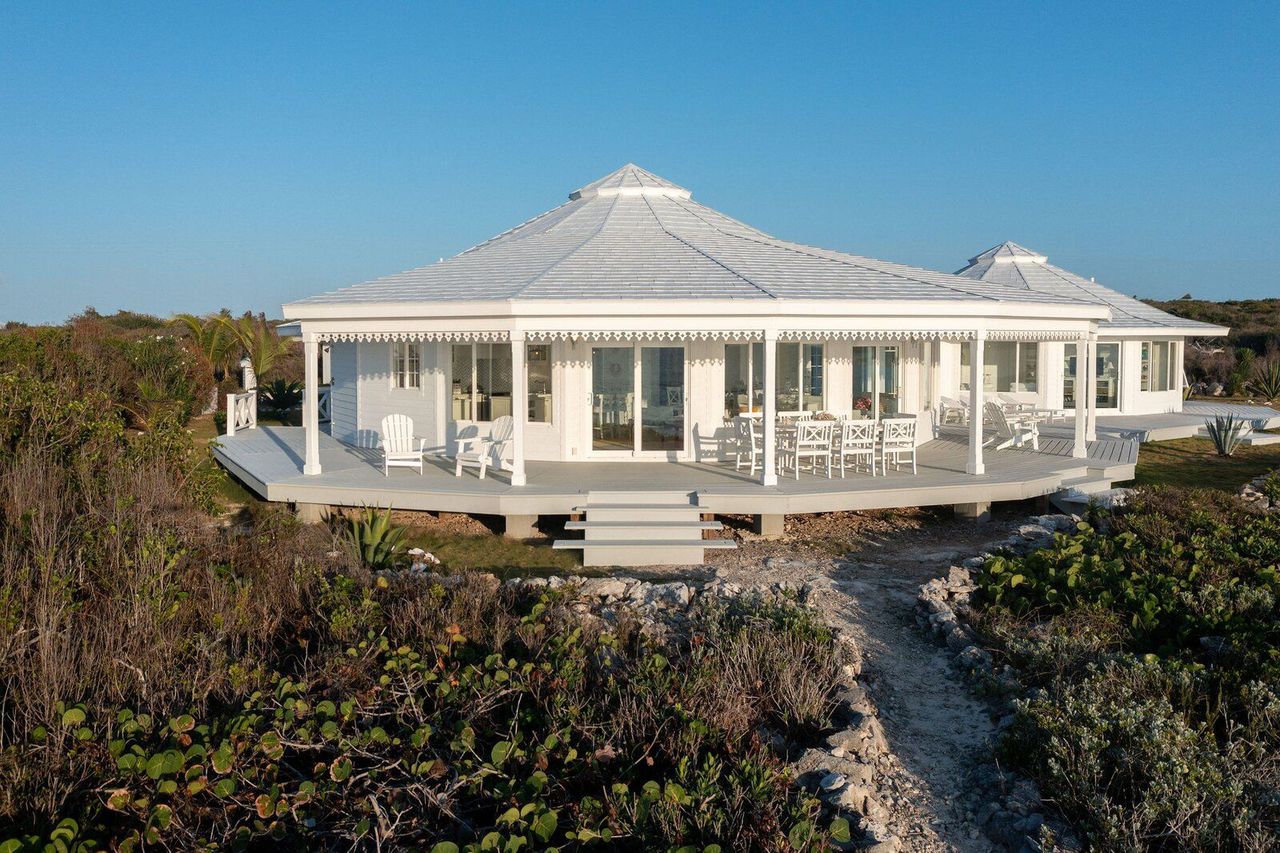 In the end, the homeowners found the perfect balance between strength and beauty. "Hurricane Joaquin showed us that in order to build a house in the Bahamas with peace of mind, we must build beyond code and take no chances."