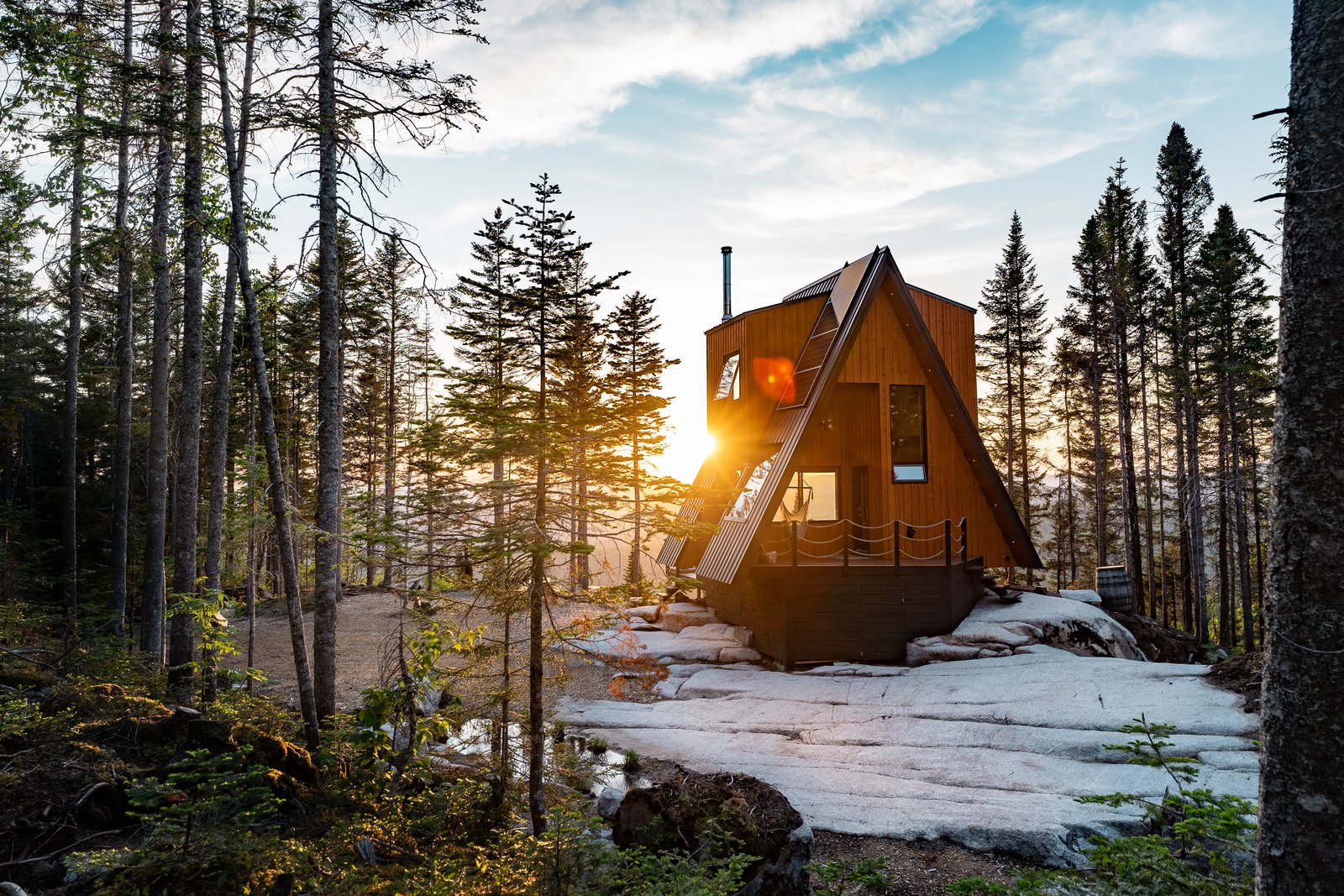 An adventurous couple build an A-frame cabin in the mountains of Quebec.

Nick Dignard has been riding bikes since he was 11 years old. "Cross-country, downhill, road racing-I did it all," says Dignard, a photo and video producer based in Quebec. After wrapping up renovations on the home he shares with wife, Marie-Catherine P. Émond, Dignard decided the next project would be building a cabin with easy access to the outdoor sports they both enjoy.

The result, La Cabin Ride & Sleep, is a modern-rustic getaway within Le Maelström-a vast, mountainous wonderland of sports and adventure in Lac-Beauport, about 20 minutes from Quebec. Perched on one of the highest peaks, Mont Tourbillon, La Cabin is available to rent through Airbnb. 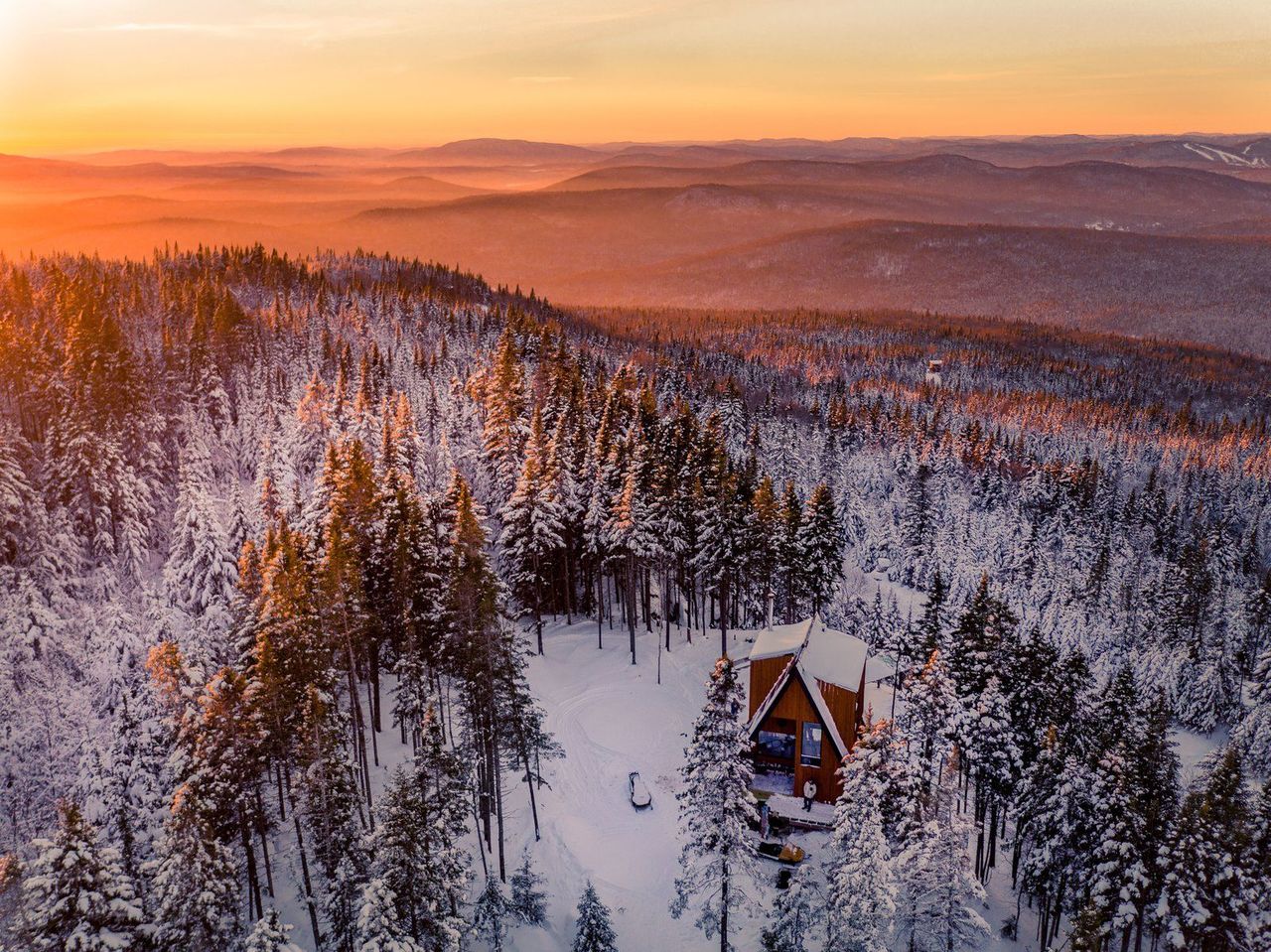 La Cabin Ride & Sleep sits on an 11-acre parcel in Le Maelström, a vacation community in the town of Lac-Beauport, in Quebec.

In addition to the proximity to so many outdoor activities, including biking, climbing, and snowshoeing, Dignard and Émond picked the cabin’s site for the 290-degree views of the surrounding mountains. "We chose this spot because it was the most exposed to the sunset," says Dignard. "We get really great sunsets here." 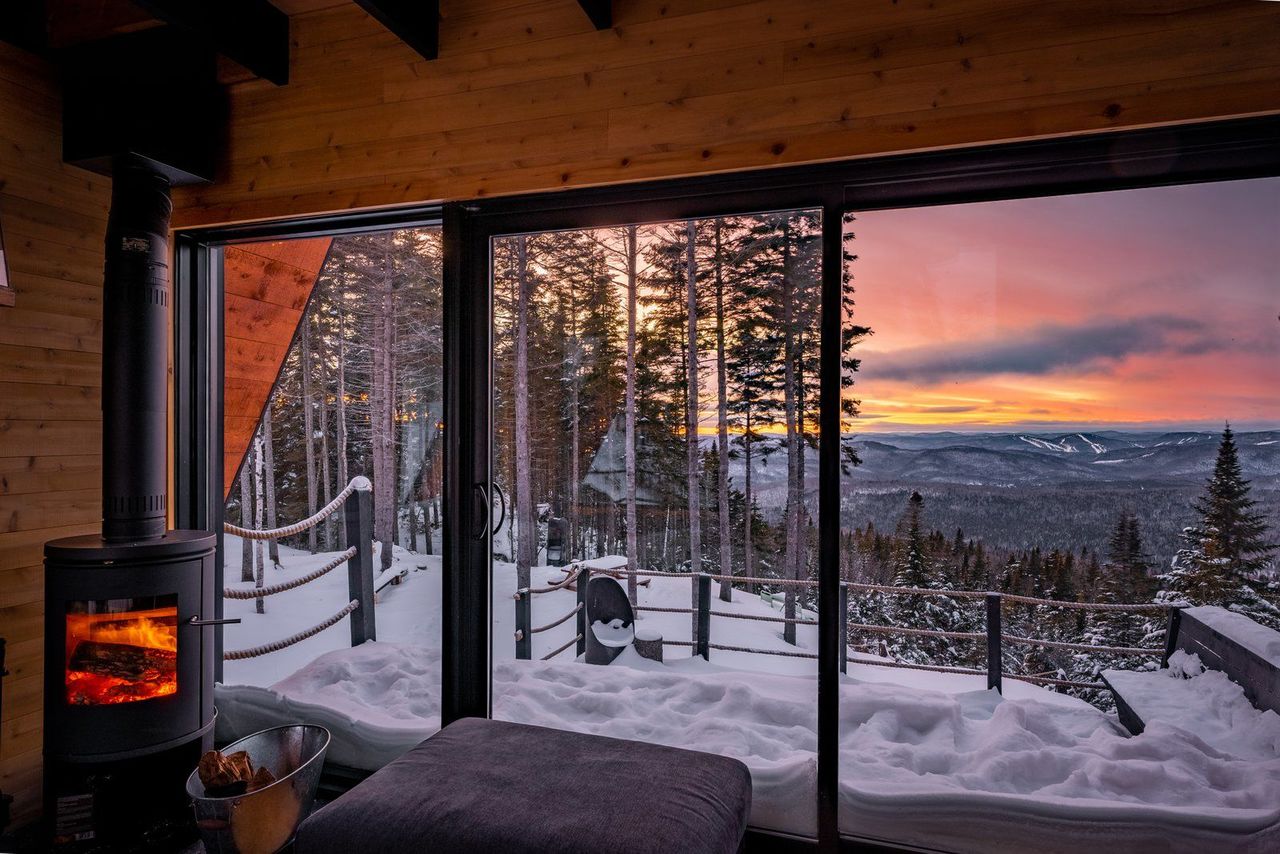 The sky view from the living room couch. The home is warmed by a propane heater and wood stove in winter.

The 16-by-16-foot cabin was designed by Émond, an architect who started the firm M4 Architecture, and built by Dignard. Two "wings" sandwich a class A-frame volume, holding the two upstairs bedrooms: an en-suite and a children’s bunk room, both accessed by a ladder. Living spaces and a half-bath occupy the main floor.

To maximize views of the sky, window openings perforate the A-frame roof, line the bed nooks, and surround the couch, flooding the cedar-lined interior with natural light. On one side of the A-frame, an empty volume tucked beneath the sloping roofline creates a sheltered porch with a hammock. Homes in Le Maelström are intended to be eco-friendly. La Cabin is off-grid and powered with solar panels. 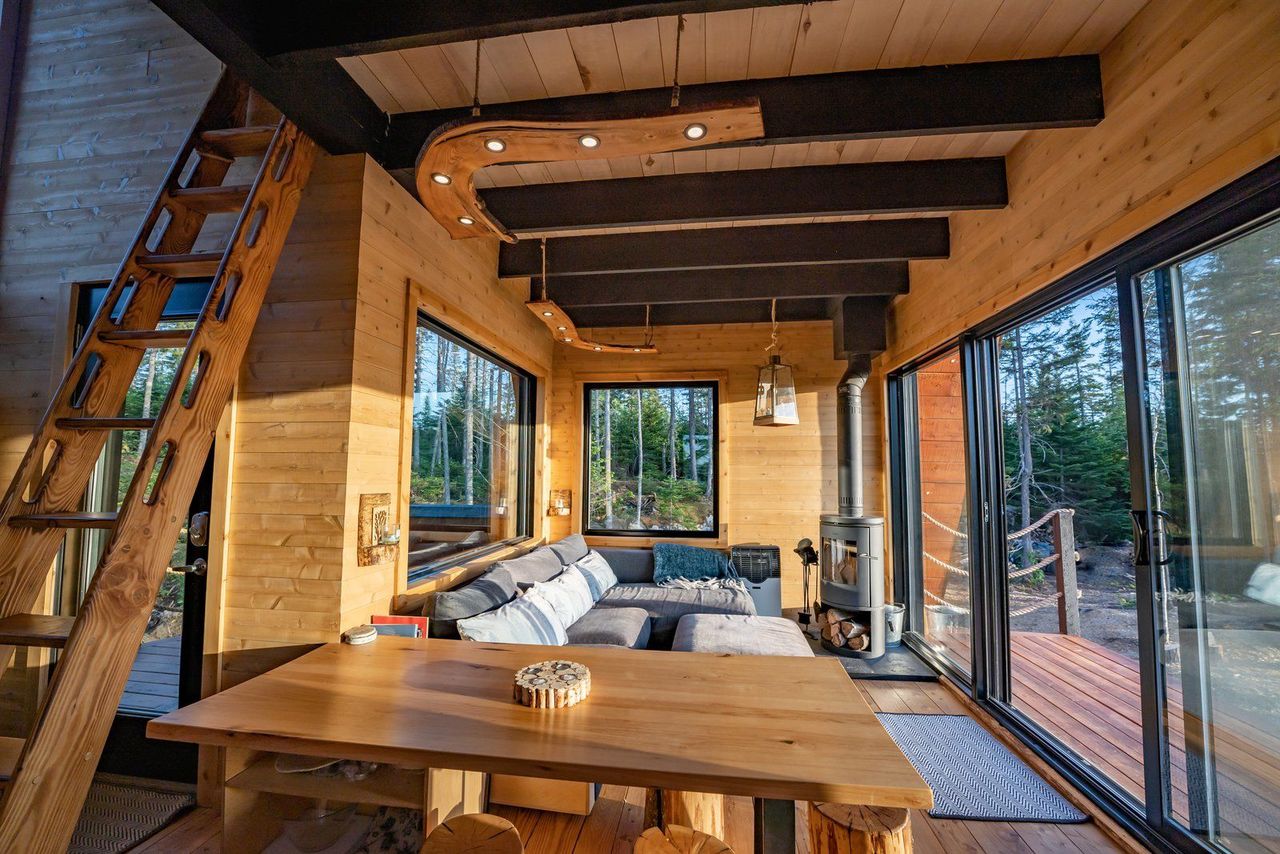 The combined living, dining, and kitchen areas take up the main floor. "The goal for the design was to feel [as though you are] outside," says Dignard. Large, sliding glass doors capture the view and lead to an exterior deck. 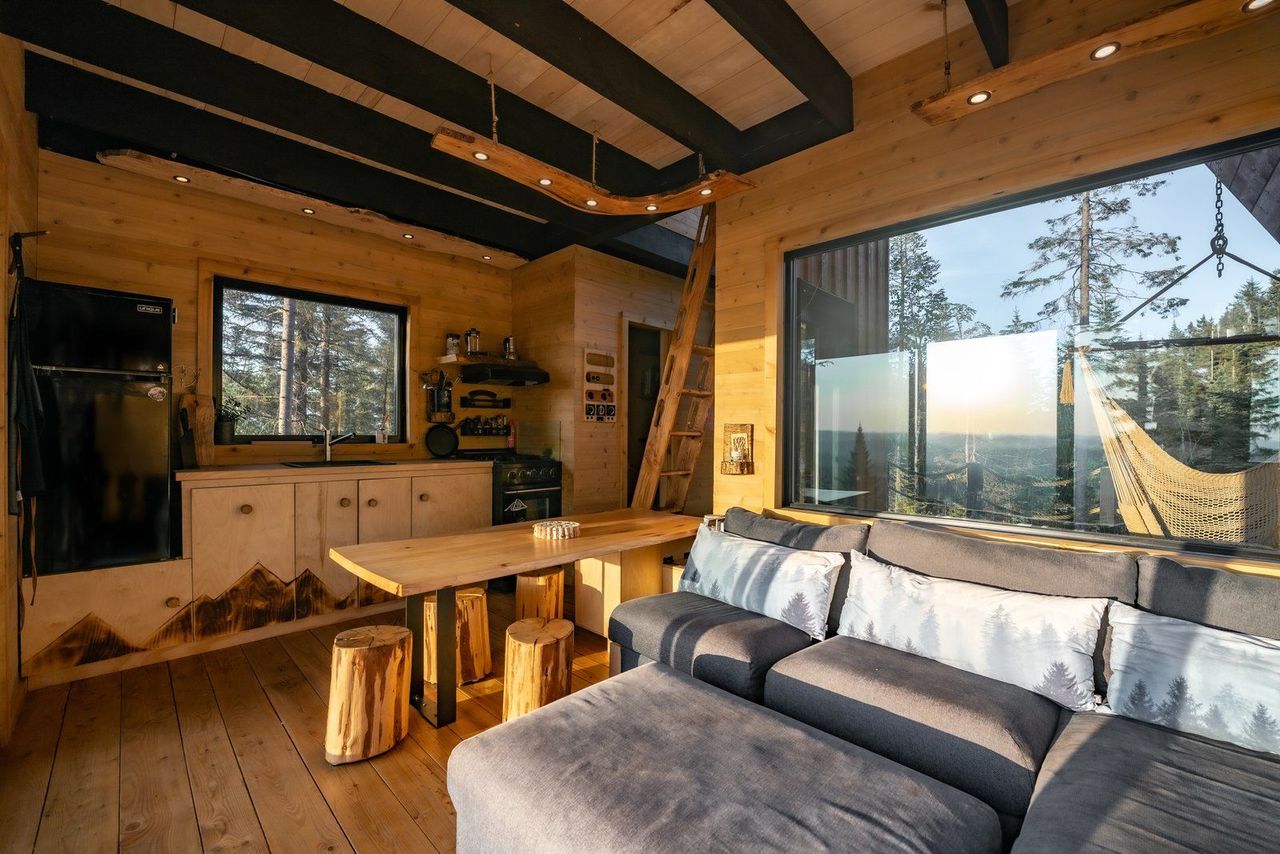 Dignard fitted out the interior with a medley of woods-cedar, larch, and aspen-and added shou sugi ban accents, such as the mountain scene running across the kitchen cabinets. The couch folds out for an extra bed. 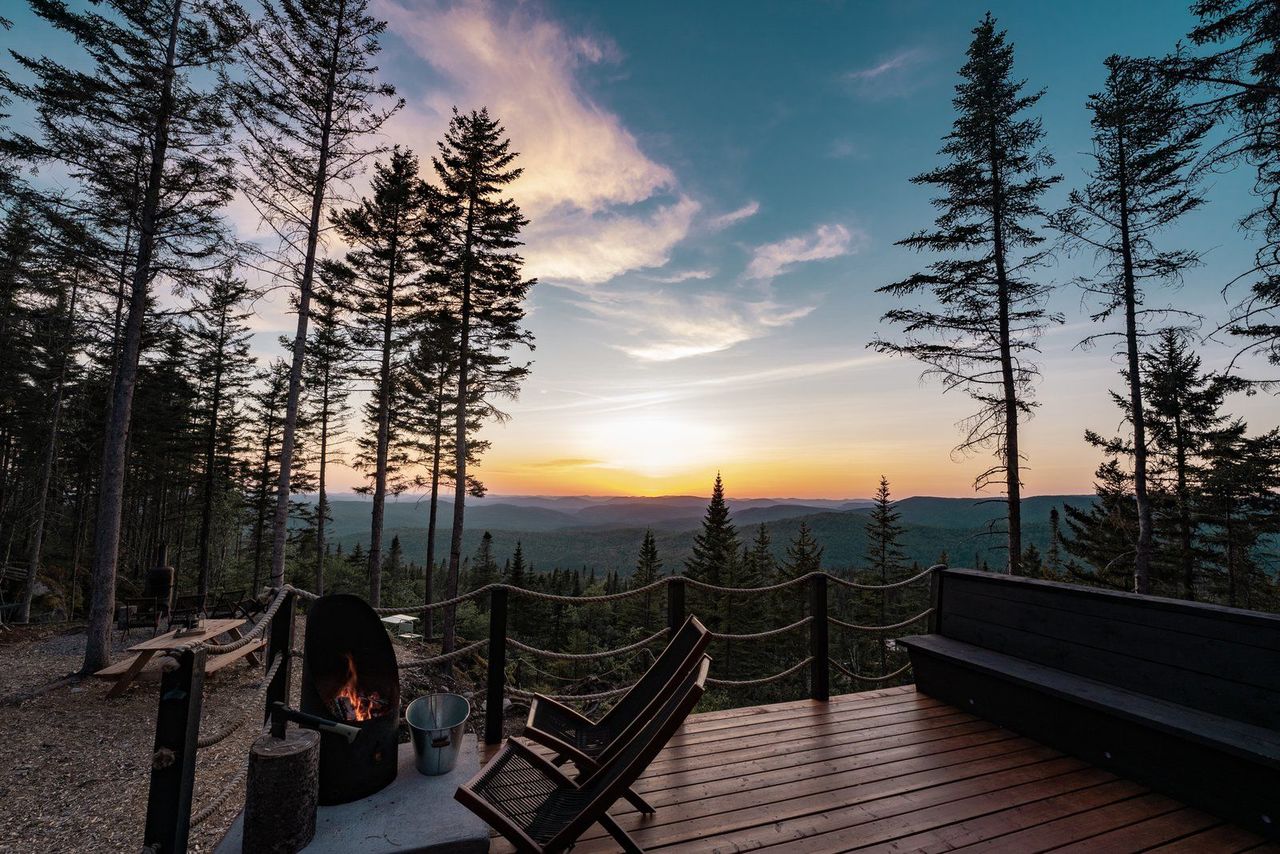 The view from the deck. Bike rides, barbecues, wood fires, and sunsets are all part of the cabin experience, although Dignard’s favorite feature is the outdoor shower: "You don't have any neighbors," he says.

For the build, Dignard took on much of the construction himself, setting up base camp at the location and living on-site, only bringing in a crew to help with framing. (His main residence is under a half hour from the cabin). He crafted most of the interior furnishings and accessories as well, from the dining table and stump chairs, to the loft ladder, kitchen cabinets, and ceiling lights composed of suspended wood planks.

The project took two years to complete, with the cabin becoming available in 2019. It can accommodate four people-six, if friends get cozy. "It’s small, but it’s very convenient," says Dignard. "We spend most of the time outside anyways." The bunk room is L-shaped and has two single beds. Each bed has an exterior window, as well as an interior window that looks into the house. "So, at night we can all say, ‘Goodnight,’" explains Dignard. The second bedroom has an adjacent bathroom. 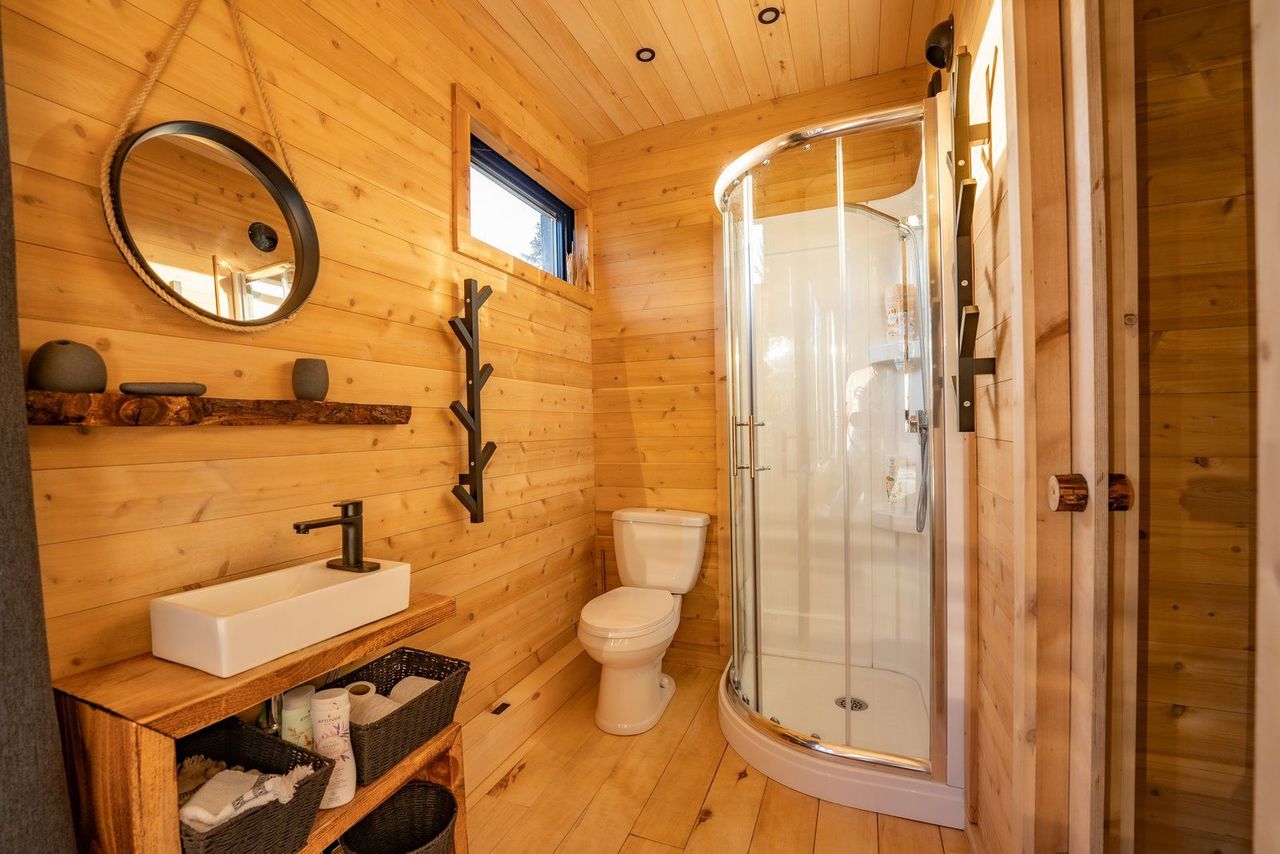 There are 1.5 bathrooms in the home, and the upstairs en-suite bath has the shower. "Although very well equipped with solar energy, you must manage energy according to the power of the sun," says Dignard. "In winter, taking six showers one after the other is not so much 'smart energy.'" 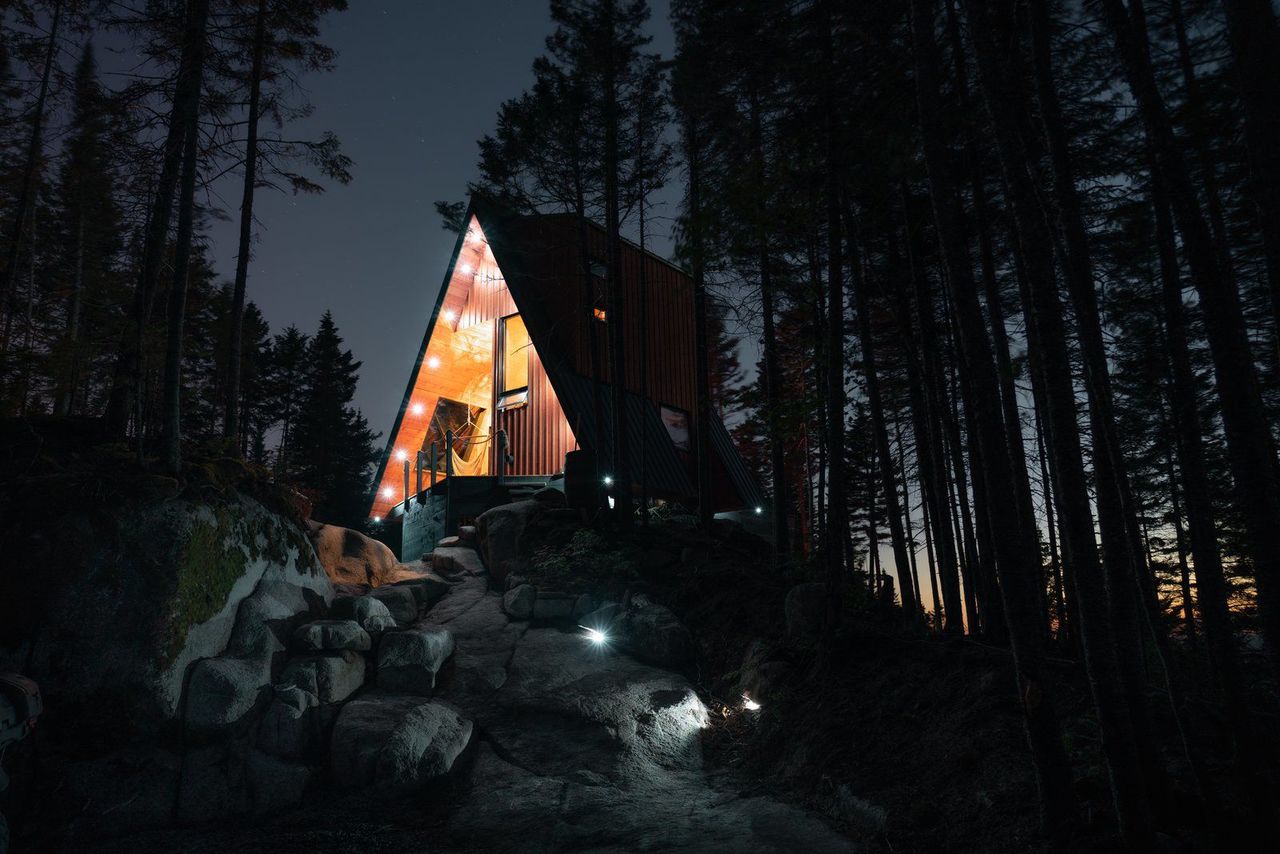 The 1.5-kilometer road leading to the cabin is well maintained, although Dignard cautions against low-suspension vehicles, and recommends good winter tires for access.