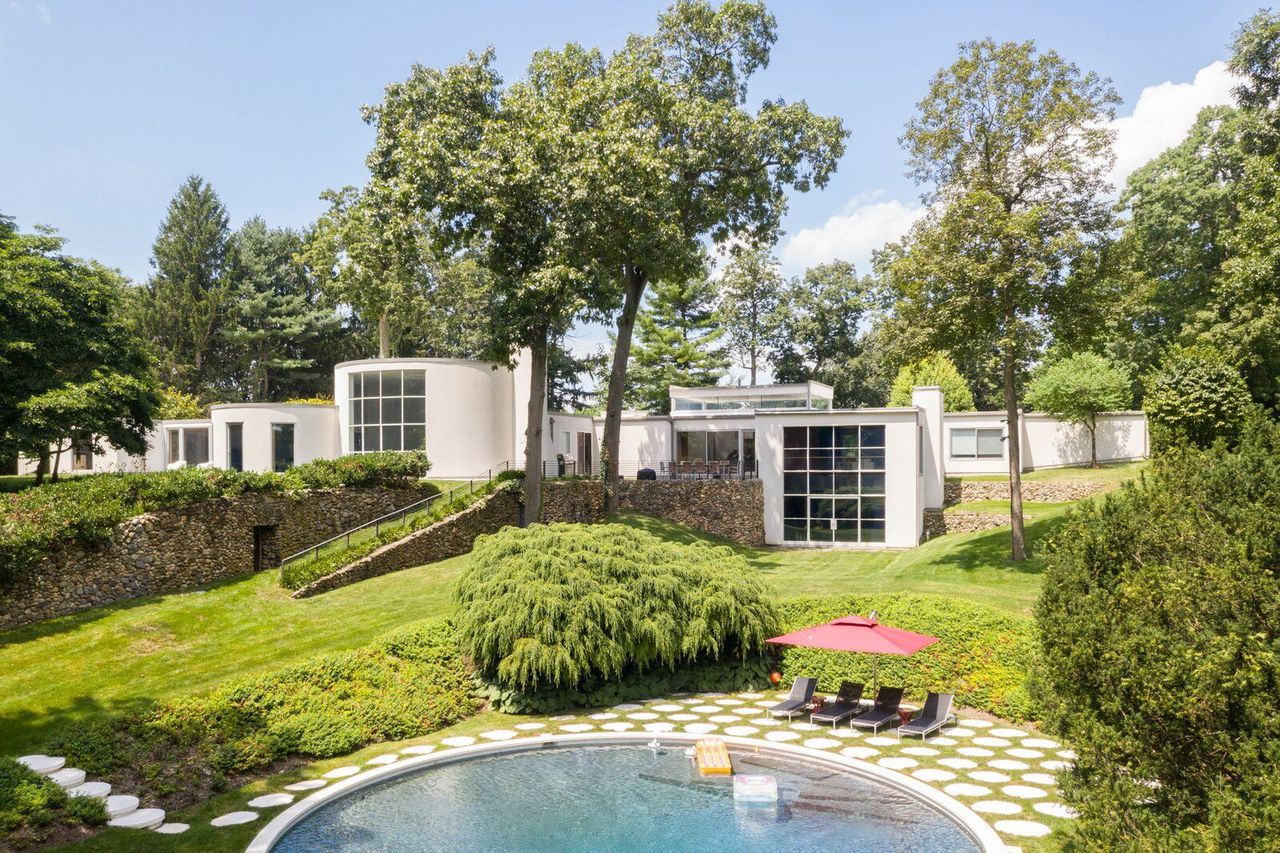 Once headed for demolition, the storied Long Island residence by the Rockefeller Center designer is on the market for $5,999,000.

Wallace Harrison designed Manhattan’s Metropolitan Opera House, the McGraw-Hill Building, the Time & Life Building, the Exxon Building, and the Empire State Plaza in Albany, New York. He also had a substantial hand in the creation of Rockefeller Center and the United Nations Headquarters, but you can’t live in any of those places. You can, however, live in the architect’s exceptionally graceful summer home in Melville on Long Island, respectfully and tastefully restored and expanded by the firm SchappacherWhite and currently for sale for $5,999,000.

Harrison purchased the site in 1931, living initially in the innovative Albert Frey and A. Lawrence Kocher–designed Aluminaire House, which he had acquired and carted off to this property after its initial exhibition. Over the next decade or so, he built a house of his own in a number of stages, adding on rooms and annexing outbuildings, including a caretaker’s cottage and stables (The Aluminaire House eventually departed and is now in sunny retirement in the hands of the Palm Springs Art Museum). 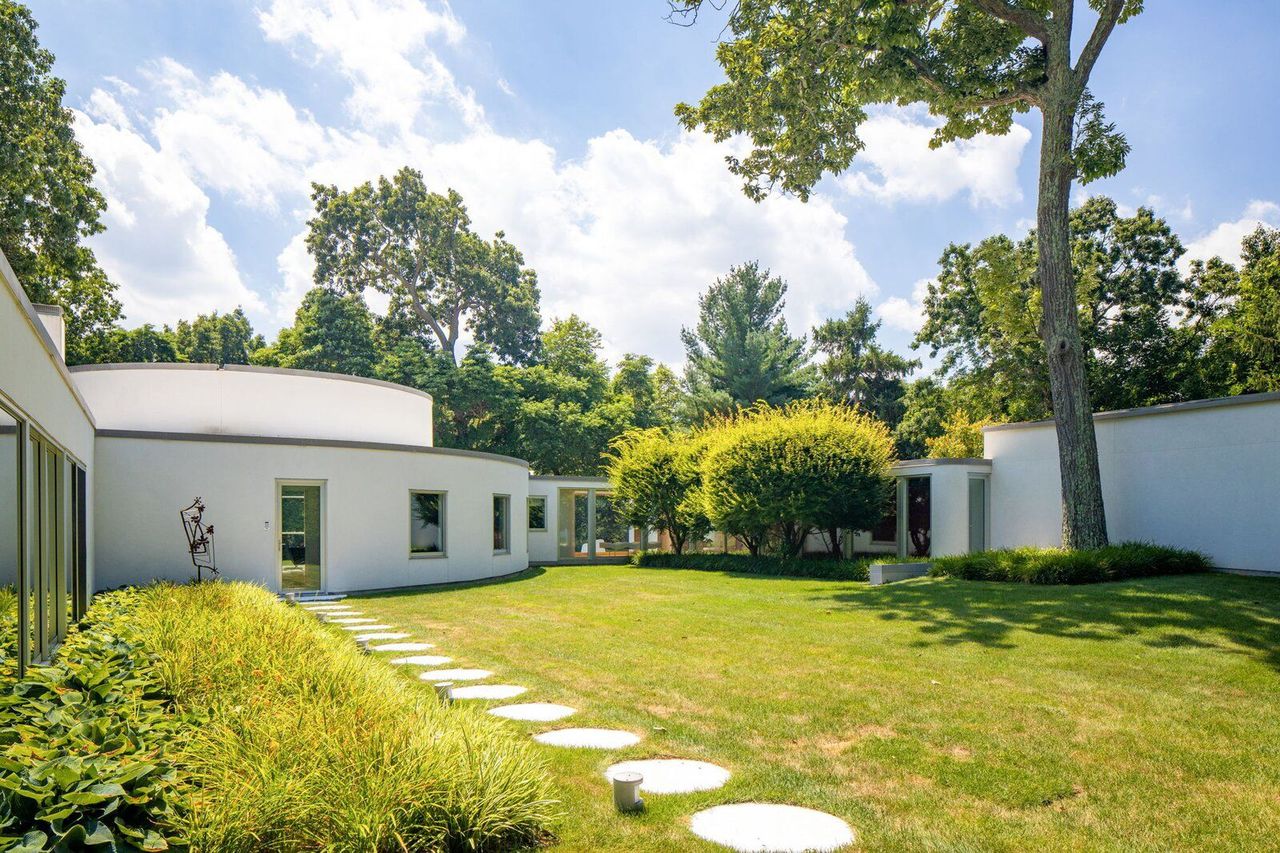 The Harrison House surrounds a green courtyard on three sides.

Harrison described the residence as "an exercise in how to fit circles together," producing an irregular design of several curved volumes alternating with geometric wings. The interiors provide winning views of the home’s eight woodsy acres, terraced hillside landscaping, a pond, and a miniature golf course.

He is believed to have found inspiration for the showcase living room-with its 16-foot ceiling, capacious window bay, terrazzo tiling, and wooden dance floor-in his work on the Rainbow Room at Rockefeller Center, but he also experimented with things at home before he built them elsewhere (no surprise for an architect with a studio down the hall). 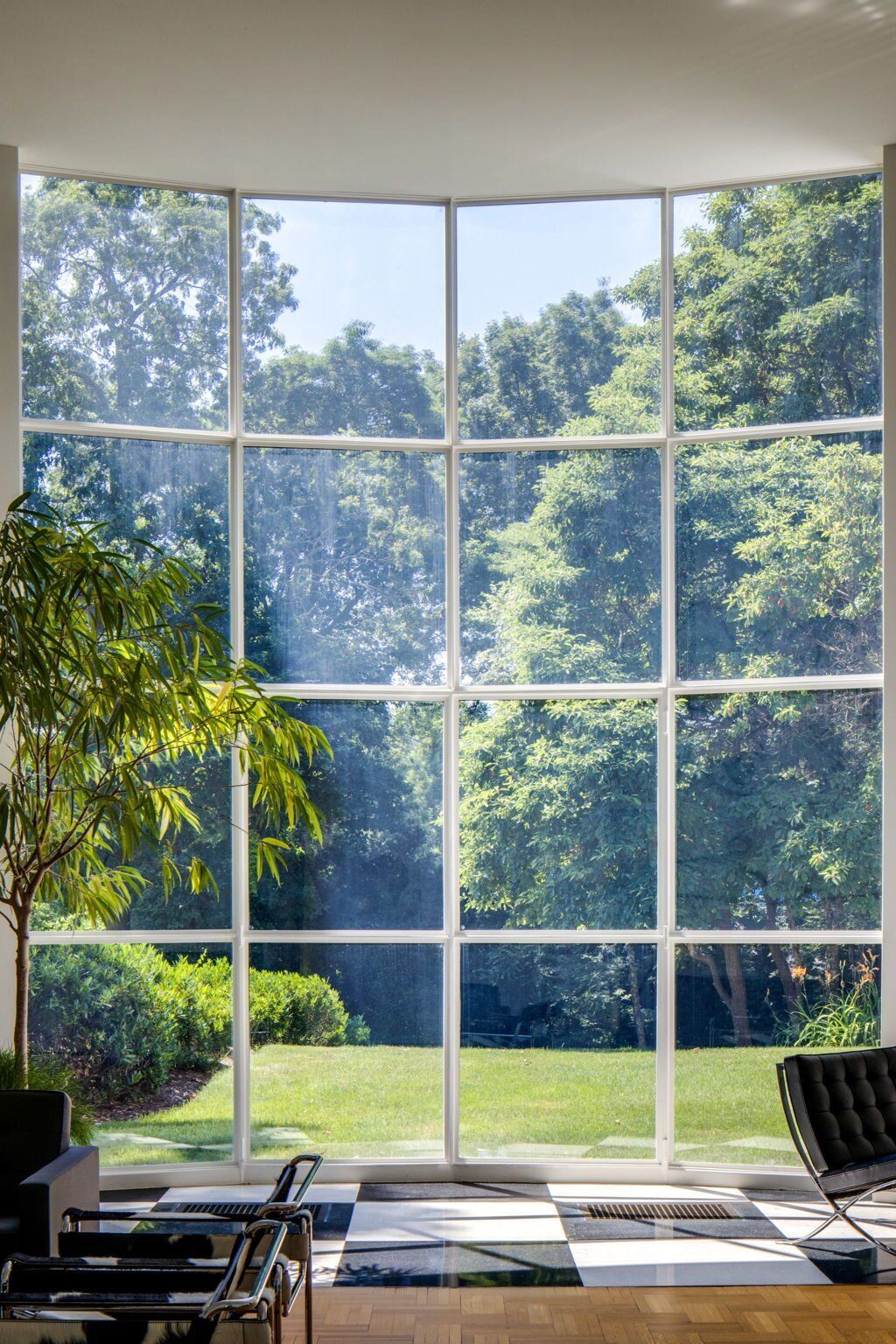 The curving wall of floor-to-ceiling glass in the living room offers a grand vista.

Harrison was well connected, linked by marriage to the Rockefellers and spending much of his career as court architect to that family, but his great talent brought him into eminent company of all sorts. Artists were frequent guests at the home: Marc Chagall and Alexander Calder came by repeatedly, and the latter is rumored to have had his first show at the property. There’s a Mary Callery sculpture on the living room wall, prudently moved inside by the current homeowners. Fernand Léger lived at the house for a time, designing an ethereal skylight in the current dining room, and was thought to have painted the bottom of the pool. 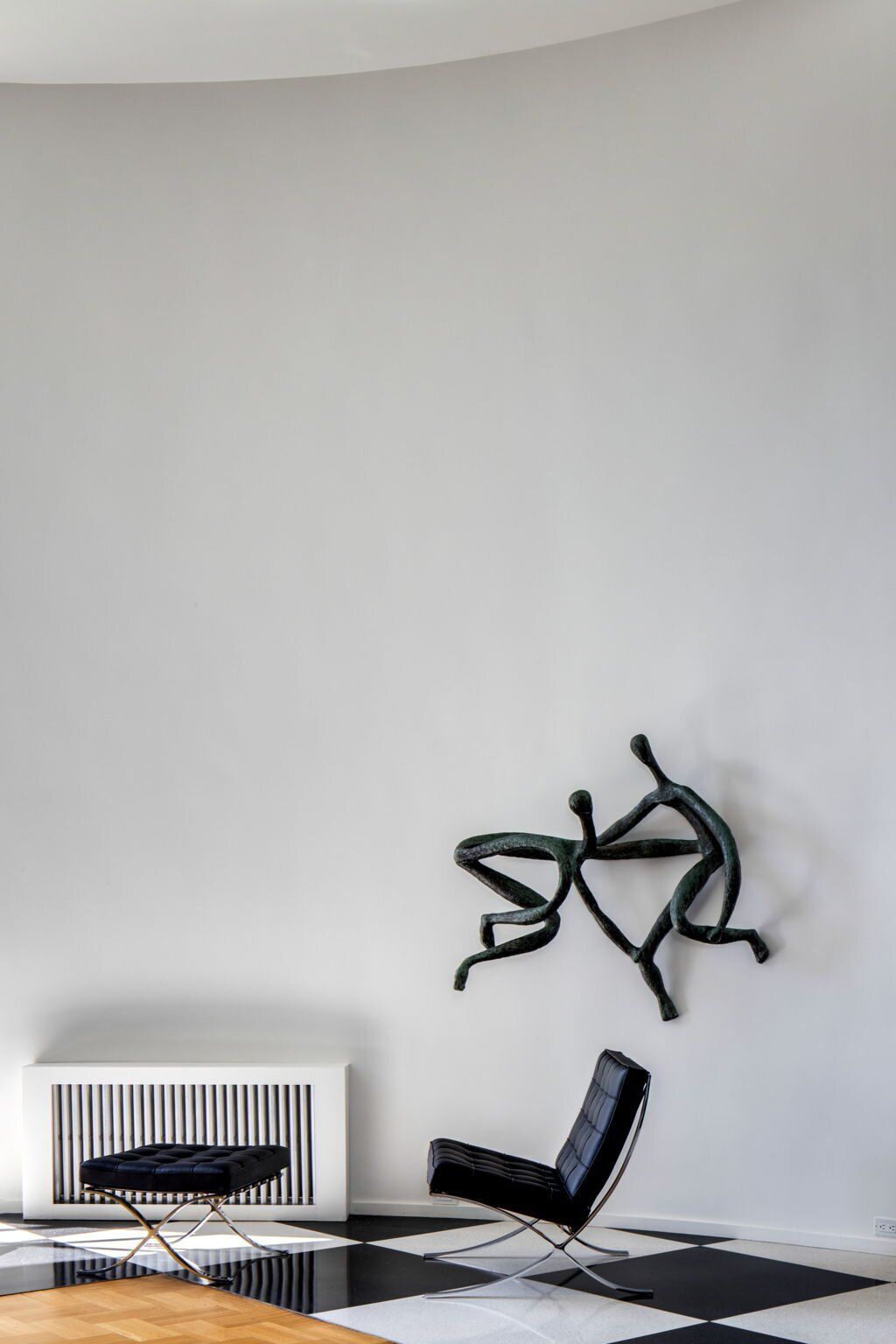 A sculpture by Mary Callery, one of the home’s many distinguished guests, hangs in the living room.

If you’ve seen any image of the home, it’s unquestionably that of Harrison, his dog, and urban planner Robert Moses beneath the living room’s curved, Léger-like canvas Les Plongeurs (The Divers). There’s a complicated trail of attribution for this piece, as Caroline Rob Zaleski writes in her book Long Island Modernism: 1930-1980.

"Both Harrisons were unabashed copyists of paintings they admired," she writes. "Only the cognoscenti knew whether the painting on the wall was a real Miró of Léger. Even the large canvas about the living room cannot be attributed directly to Léger. Ellen Harrison and her daughter produced the large work from a graphite, ink, and gouache cartoon on graph paper that Léger had given them."

The work was great, whatever the case, and is now in the collection of the Ludwig Museum in Cologne, but its spirit lives on in a three-dimensional revival, a steel sculpture by artist Brandon D’Leo. 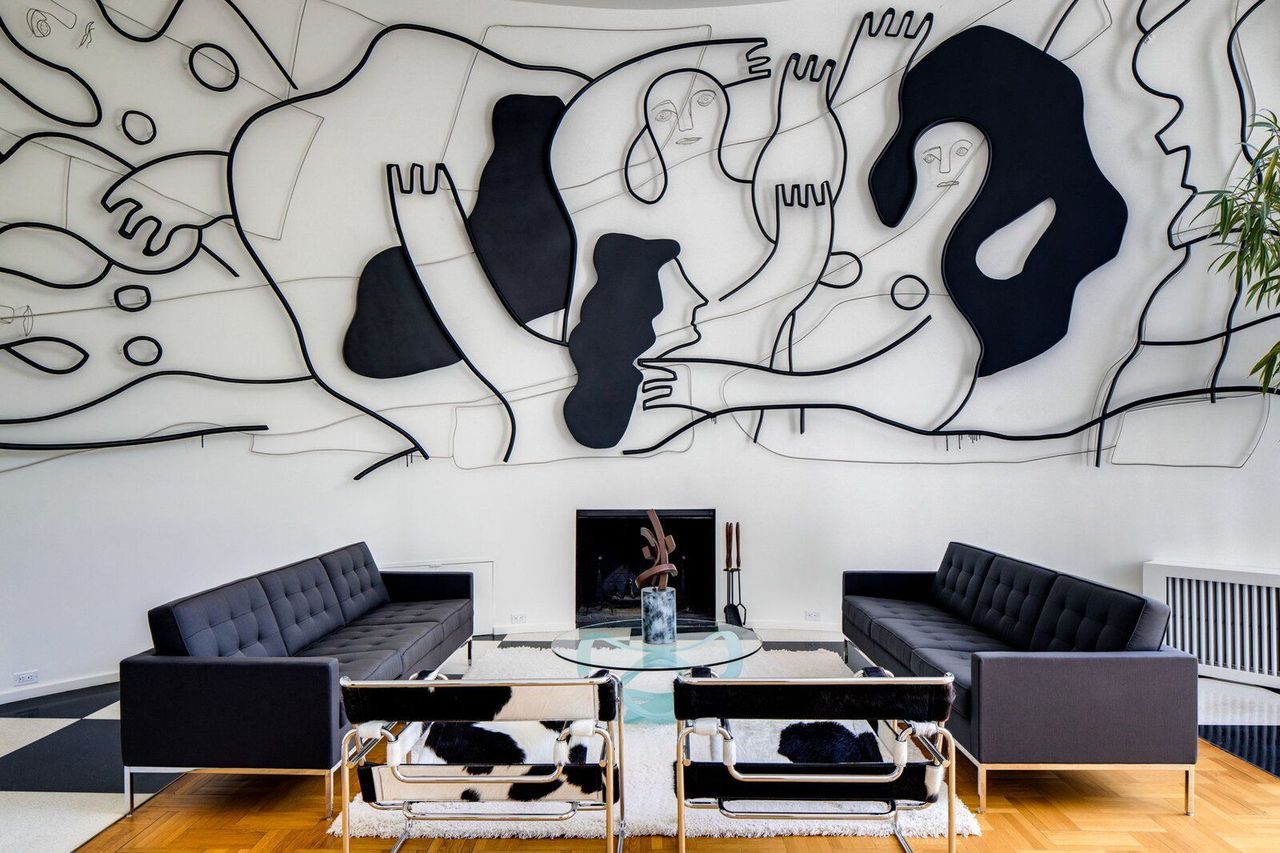 Brandon D'Leo's Steeling Léger offers dramatic focus to the living room and replaces a canvas that previously hung there. The current owner notes that when they asked the artist and sculptor for ideas, D'Leo determined that the painting could be recreated with steel. After creating a mockup of the living room in his studio, D'Leo spent a year creating the piece and determining how to hang it on the wall-the work even replicates an original paint drip.

In 1975, the neighbors Harold and Hester Diamond (parents of the Beastie Boys’ Mike D) purchased the Harrison House for the supreme bargain of $12,000. (Being art dealers, they can’t have minded the 12 Léger oil paintings in the boiler room.) The home was placed on the National Register of Historic Places. The subsequent owner, however, had different aims-namely, running the property into the ground such that it could be demolished and sold.

In 2003, Larry and Lori Spiegel bought the house, which had been on the market for years, the weekend they saw it. Larry noted that the house was "essentially abandoned" with trees growing through holes in the roof and animals inhabiting the vacant space. "[The owner] was hoping that if the house was uninhabitable, that it could then be knocked down," he continues. "We saw it and fell in love with it because we were stupid; if we were smarter, we never would have done this."

The Spiegels spent two years engaging architects for particular repairs, but the work remained daunting. "We were really on the point of giving up. Parents were afraid to let their kids play at my house," says Larry. He later encountered architect Steve Schappacher in an architecture magazine in a feature about the restoration of Ulrich Franzen’s Castle House on the shores of Long Island Sound. "I left him a voicemail where I basically said, ‘You’re our last hope,’" says Larry. "He was out here in two days." It was a Herculean undertaking. Larry recalls, "I think I had something like 4,000 emails dealing with the period of construction. We used to have weekly meetings with 12 people here."

There were manifold issues, some relating to the building’s sheer age, others to its original purpose as a seasonal home. "We could never get the temperature over 55 degrees in the winter," says Larry. "There was no air conditioning. Every system had to be replaced: the plumbing, the electric, on and on." Some original concrete walls couldn’t be insulated or filled with wiring or ducts; radiant floor heating was the solution. All of the windows were replaced, a task requiring a bit more effort than a stop at Home Depot: "How do you get 95 steel windows?"

There were plenty of surprises in store. The circular stepping stones around the property look artful, but turned out to be quite mundane in origin. "The rumor was that Harrison ran out of money, so a cheap way to do this was to use cesspool covers," says Larry. "When we did the renovation, we had to shut down a cesspool company to churn out 150 cesspool covers. People buy cesspools with the covers-no one buys just the covers!" The architects restored original portions of the home in beautiful detail, doubled the living space with a respectful addition, and repurposed other rooms: The former studio and office, for example, are now the main bedroom and bath. The former kitchen is now the dining room, and the stables and caretaker apartments became additional bedrooms. 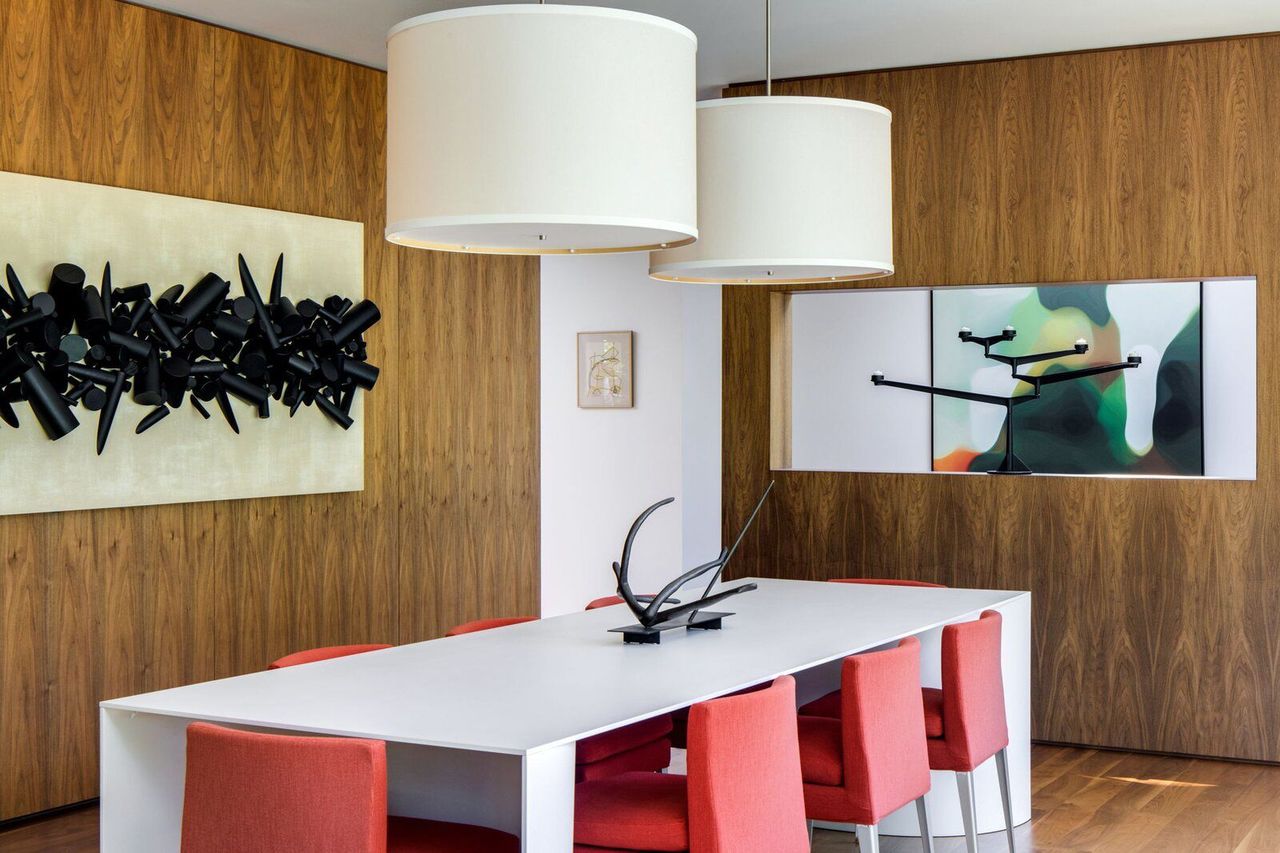 The dining room is wrapped in wood.

The expansion didn’t presume to add additional circles; instead, the addition revolves around a flat, two-story, steel-framed glass wall that echoes and frames the original portion’s curves without competing with them. 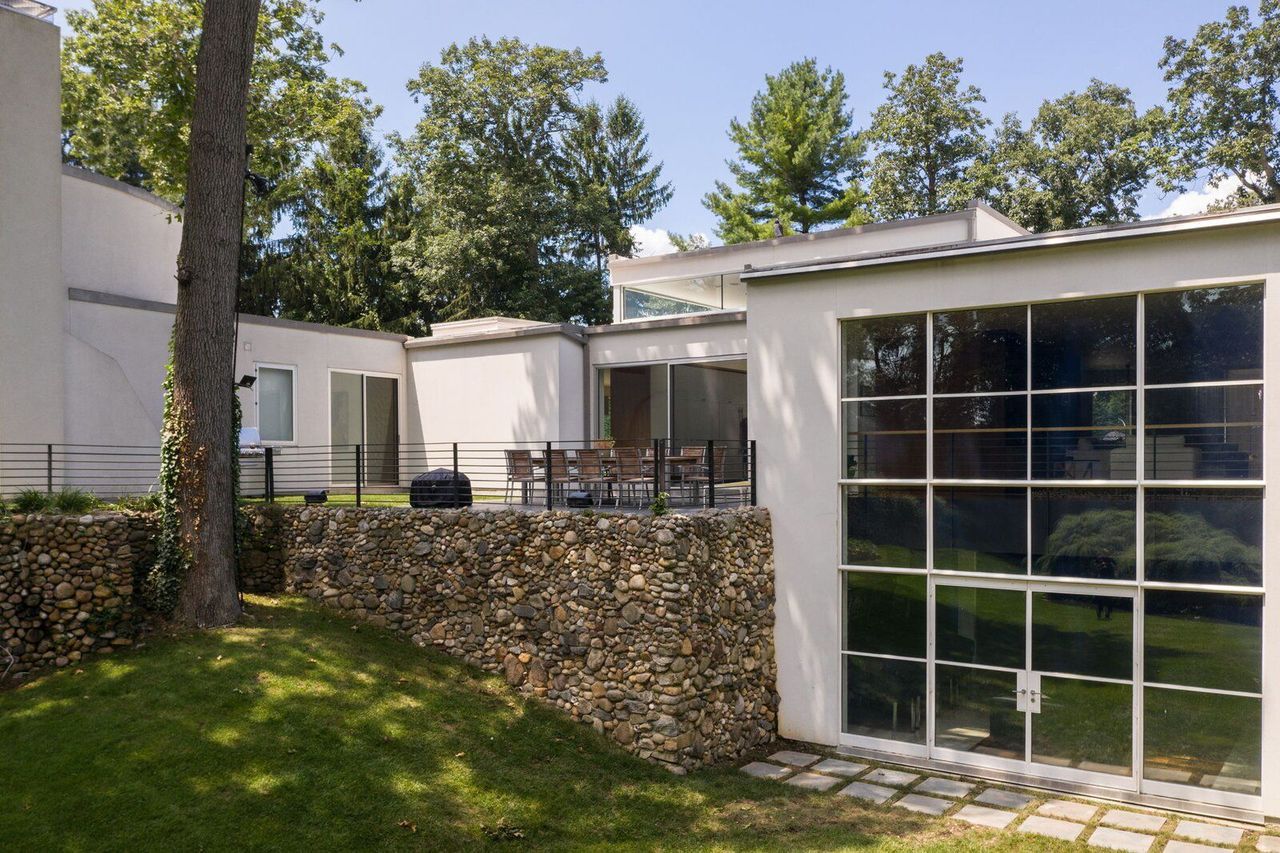 The living room’s checkerboard terrazzo tiles and wooden floors were in strong shape, as was the millwork surrounding a curved library space next to the room. The miniature golf course, which was constructed with works of art as obstacles, remains. 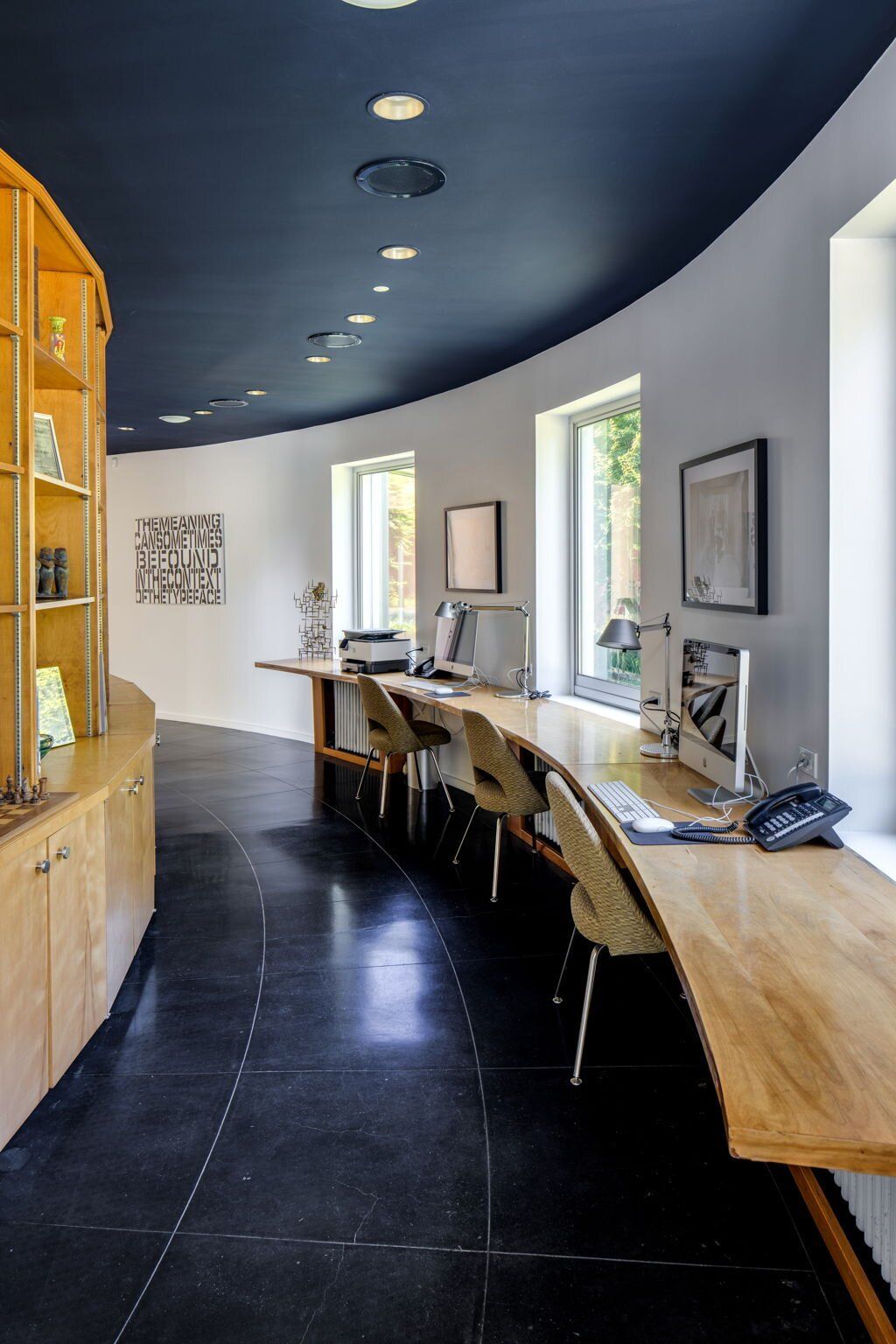 The art had been sold off, but the Spiegels placed new pieces around the property. The home is filled with midcentury-modern furniture redolent of Harrison’s occupancy (and the owners are open to selling some of the pieces, so ask). The residence has been used frequently in television shoots, appearing as a set in Gossip Girl, Suits, Royal Pains, and other shows.

Larry notes that the home proved an ideal escape during COVID-19, which brought renewed attention to the fact that "anytime you turn, you’re always turning into a window to the outside." They hope to find a buyer who appreciates this historic treasure as much as they do: "We’d very much like to be sure that whoever bought it is someone who could be trusted with it."