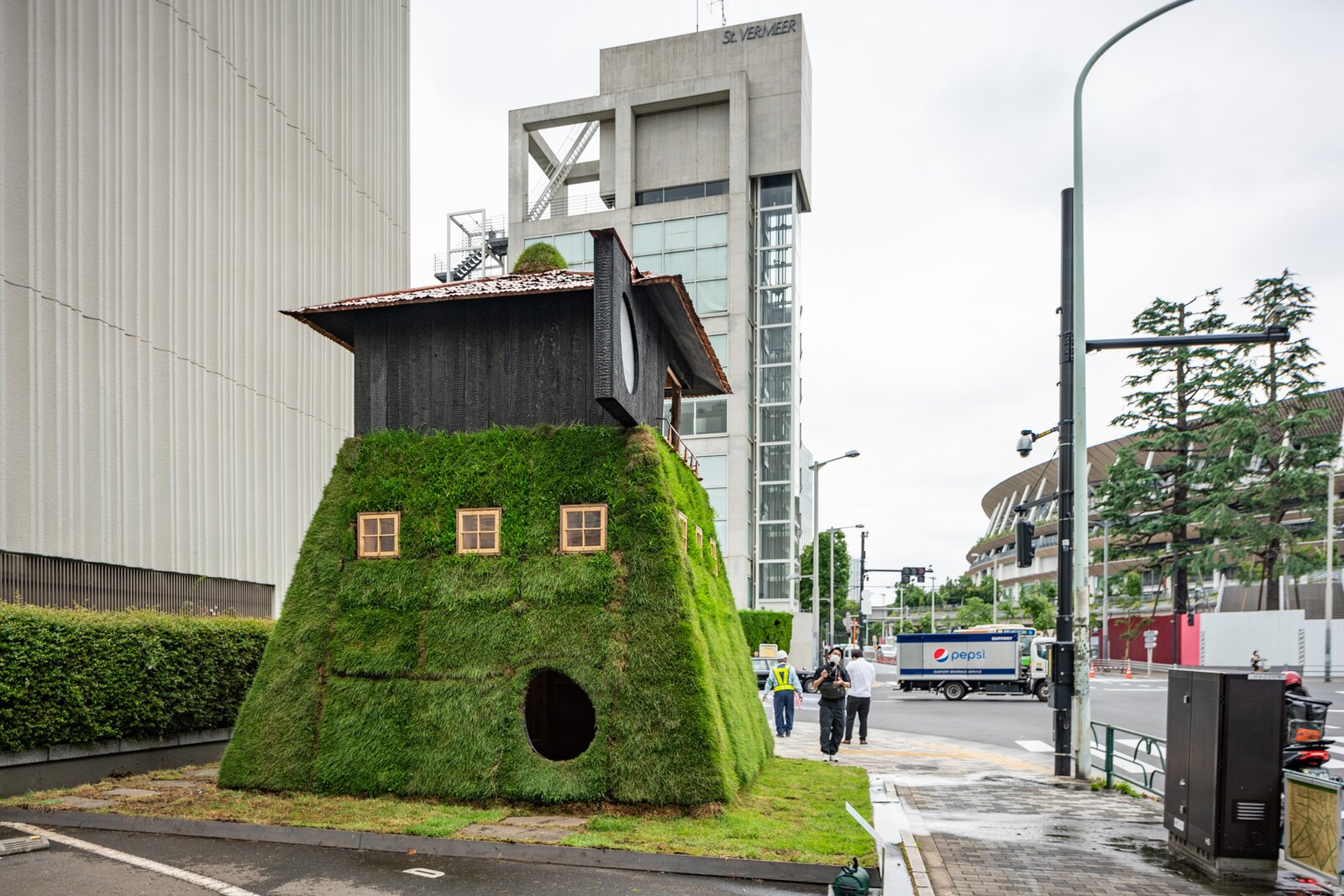 Ahead of the Summer Olympic Games, a peculiar structure has appeared in Tokyo overlooking the Japan National Stadium: a timber-clad teahouse sitting atop a grass-covered mound. This whimsical reimagining of a Japanese archetype is the work of renowned architect Terunobu Fujimori, and it will greet visitors until September 5 as part of the Pavilion Tokyo 2021 program.

To access the teahouse-which has been given the name Go-an-visitors crawl inside a small opening in the grass mound, which leads to a waiting room. They then climb up a ladder to reach the main tea ceremony room. As you emerge from the darkness, a vista of the Japan National Stadium, designed by architect Kengo Kuma, appears through the large window. At night, when the lights are on, the teahouse appears as a large lantern amidst the urban landscape. 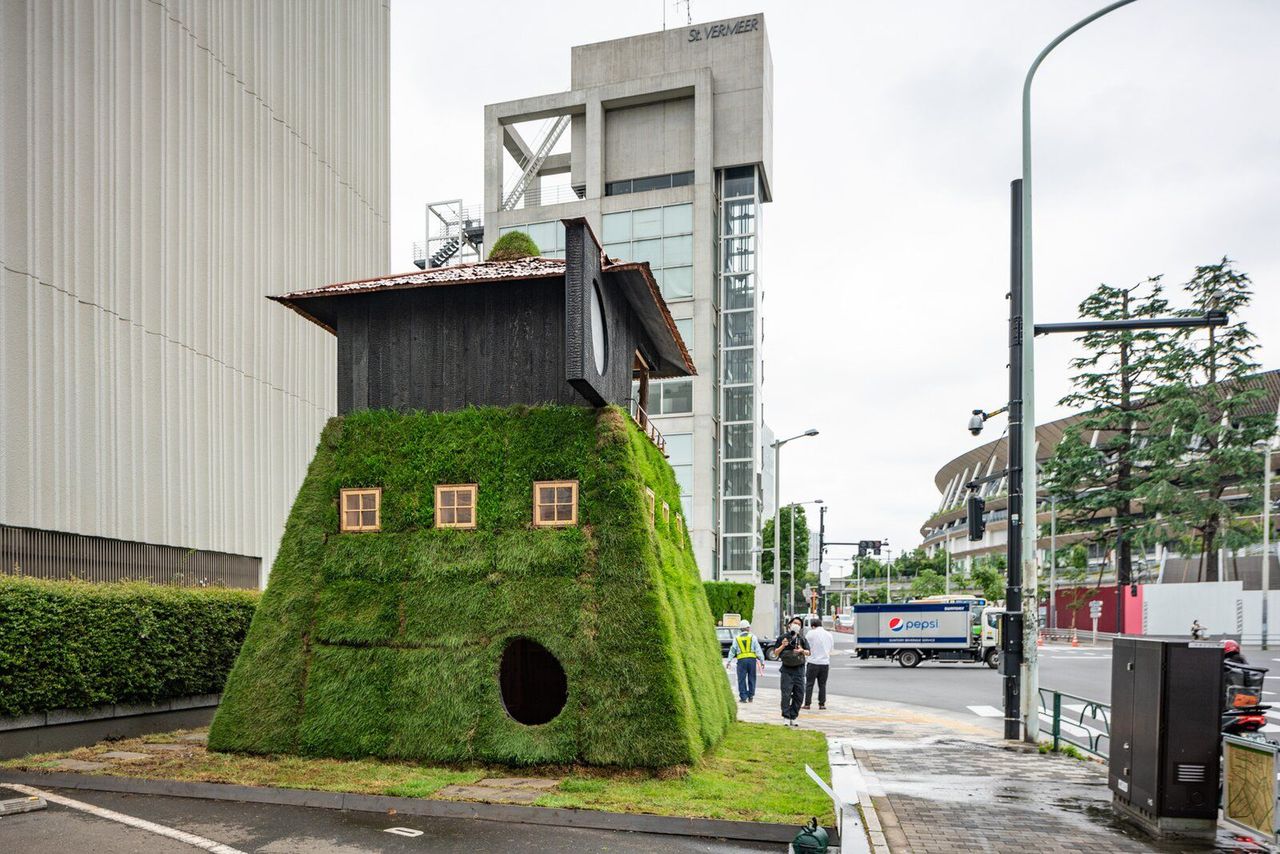 Pavilion Tokyo 2021 is one of the "Tokyo Tokyo Festival Special 13" events held in connection with the Tokyo Olympics. The initiative features seven small temporary buildings by Japanese artists and architects-including Kazuyo Sejima, Sou Fujimoto, Junya Ishigami, and Yayoi Kusama-that have popped up in the capital around the Japan National Stadium.

To access the teahouse-which has been given the name Go-an-visitors crawl inside a small opening in the grass mound, which leads to a waiting room. They then climb up a ladder to reach the main tea ceremony room. As you emerge from the darkness, a vista of the Japan National Stadium, designed by architect Kengo Kuma, appears through the large window. At night, when the lights are on, the teahouse appears as a large lantern amidst the urban landscape.

"I like heights," says Fujimori. "Not only can you see the entire teahouse well, but from there you can also view the stadium. A teahouse requires otherworldly characteristics. Instead of it just standing on the ground, it requires height. Once you climb up and enter through the narrow and dark crawl-in entrance, you see a completely different scenery." 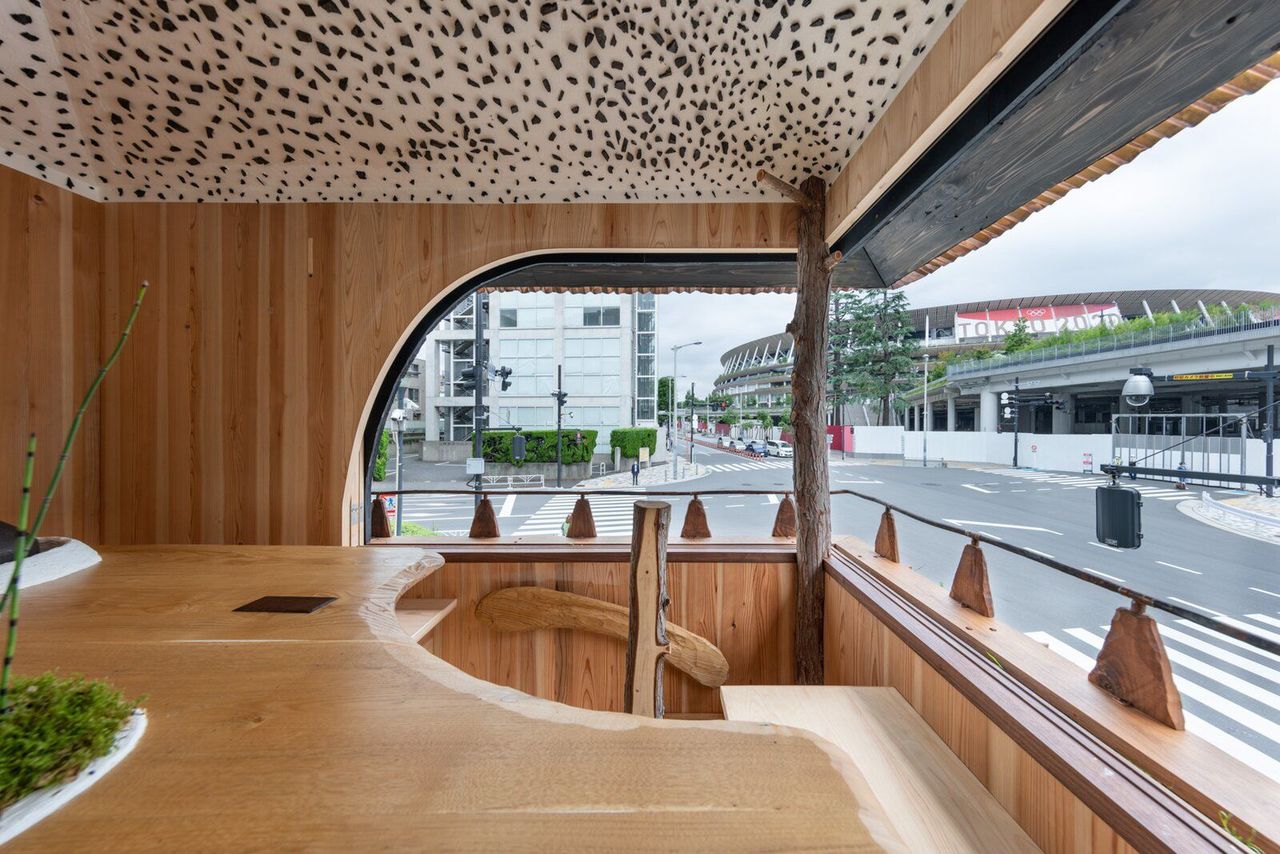 The large window has been designed to frame a view of the Japan National Stadium, where a number of events will be held for the Tokyo Olympics. "Unusually for architecture, a teahouse has its own name, just like a human being," says architect Terunobu Fujimori. The Pavilion Tokyo 2021 teahouse is named Go-an.

Fujimori is a leading figure in Japan’s architecture scene who is well known as an author, cultural commentator, and TV host. He’s not only an architectural historian-perhaps best known for his studies of Western-style buildings in Tokyo in the 1970s and 1980s and his ongoing work documenting unusual occurrences in the urban landscape-but also one of the country’s most surprising architects.

He was born in 1946, and made his debut as an architect late in life, at the age of 45. His work is characterized by its use of natural materials and eccentric forms, and throughout his career he has created a number of what he calls "freestyle" teahouses-from a structure perched on stilts in a forest, to one suspended above the ground. 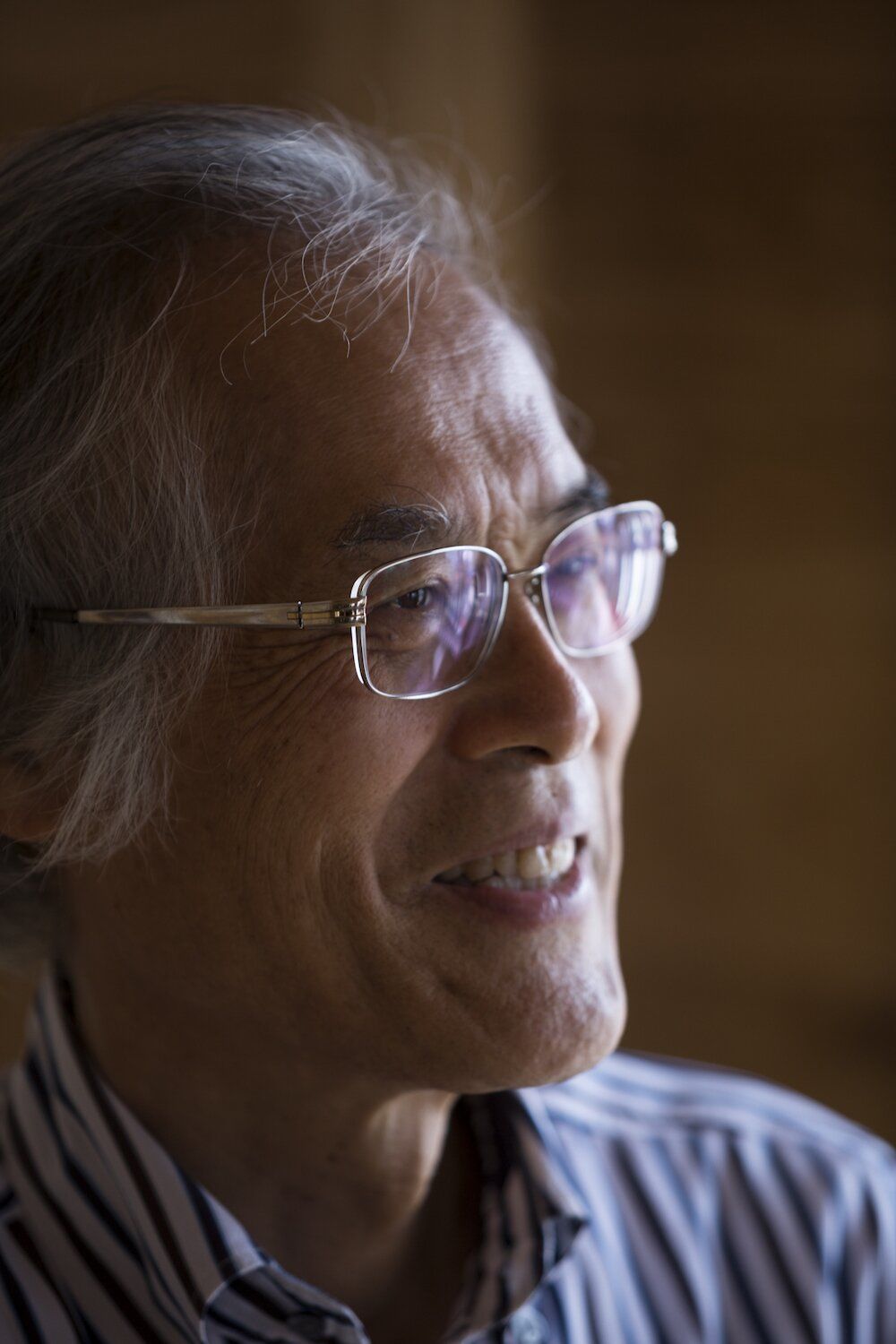 "The teahouse is a unique building in the world, and I want many people to see it," says the architect. "Traditional teahouses that were formulated 400 years ago are good, but freestyle teahouses are more architecturally interesting." 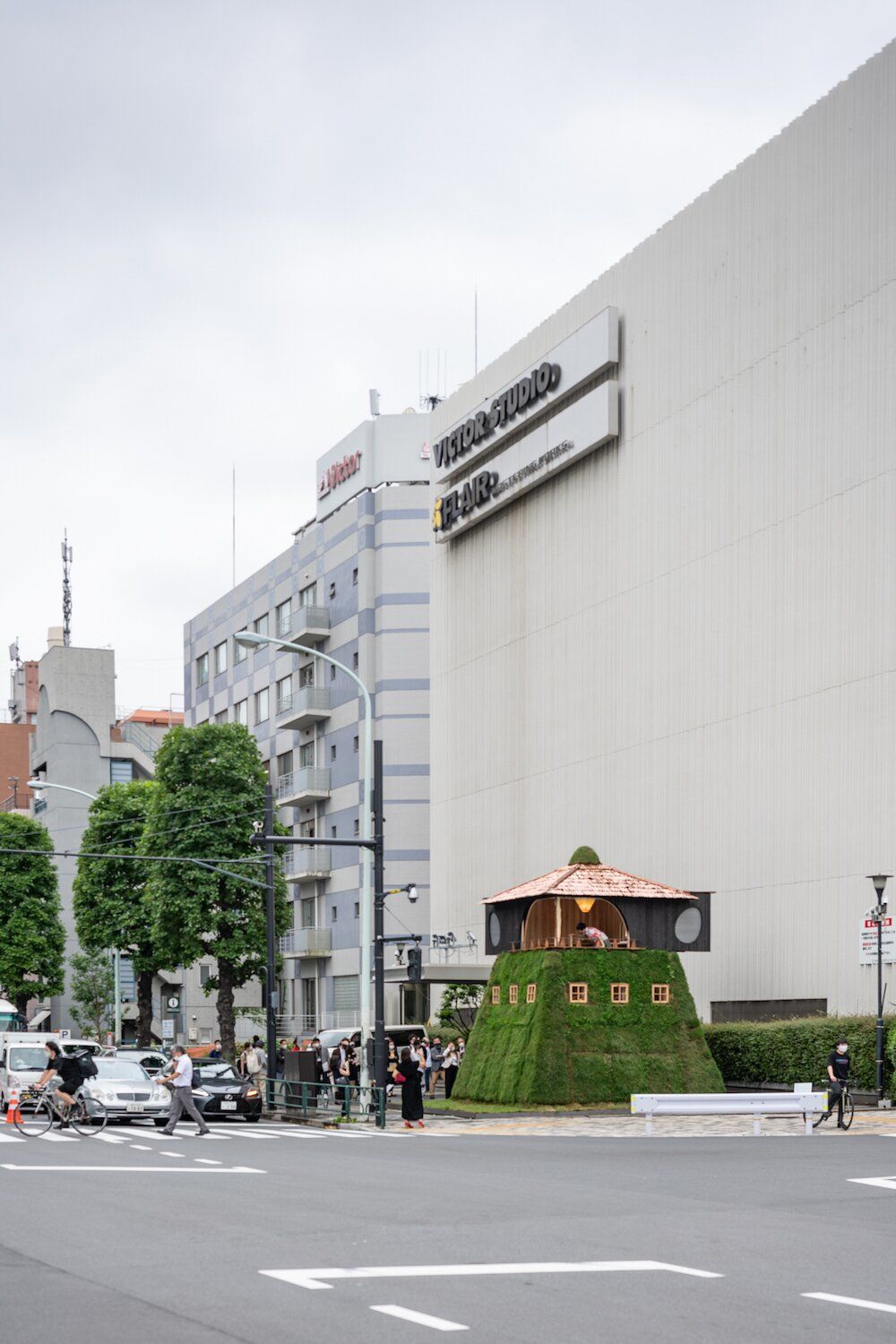 The exterior of the teahouse is clad in charred cedar-known in Japanese as yakisugi. It’s made by burning and carbonizing the surface of wood. The charred layer protects the timber from deterioration and enhances its resistance to fire. Passersby can see what is happening inside the teahouse through a large window that frames the tea ceremony room.

The materiality of the exterior is mirrored on the inside, with exposed J-Panels on the walls and a plastered ceiling embedded with crushed charcoal. The teahouse features a ryurei (table-style) tea ceremony room, with a large table crafted from thick chestnut boards from the mountains of the Nagano Prefecture in central Honshu. The knots, cracks, and distortions in the surface of the table have been intentionally left visible, celebrating the wildness of the natural wood.

According to Fujimori, the material palette challenges notions of what Japanese architecture can be. "[If] I show a traditional tearoom, everyone feels ‘this is Japan’ and stops thinking there. I hate it," he says. "That’s why I don't use shoji or bamboo. I want you to see the ‘hospitality’ of the tearoom rather than the architecture." 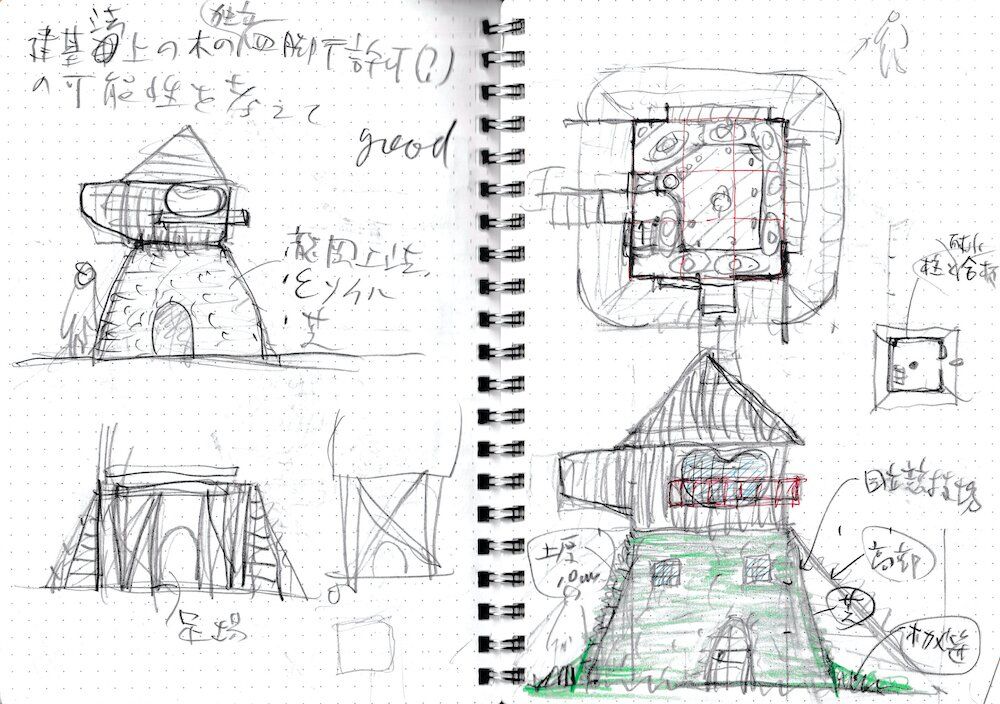 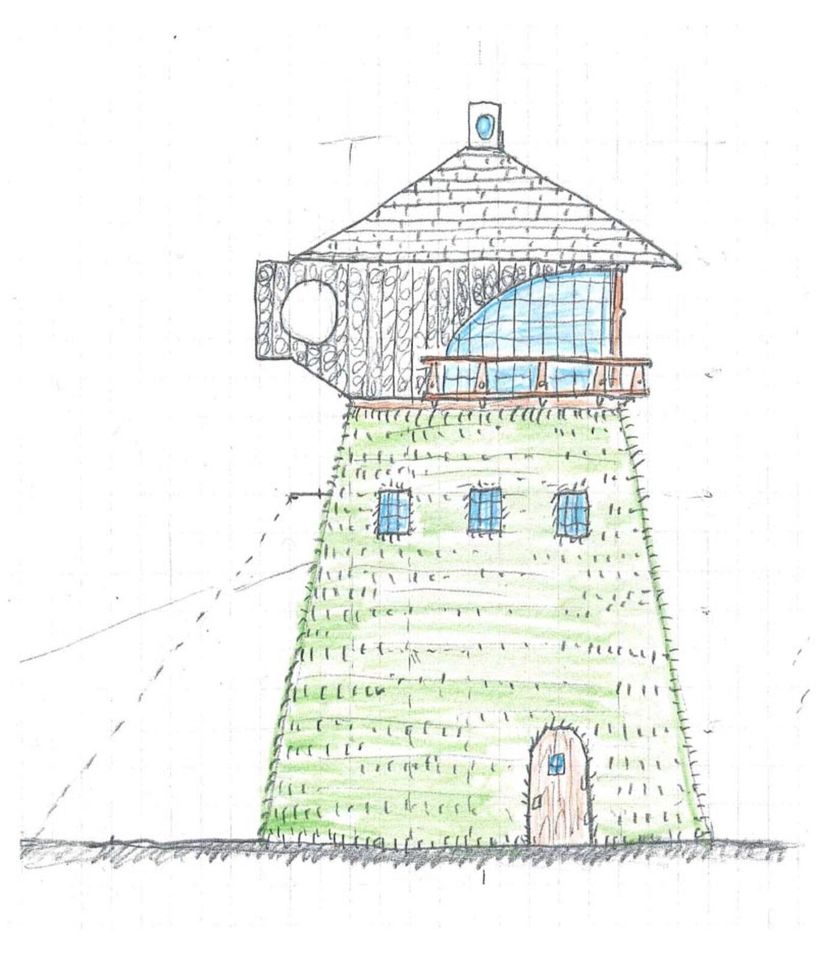 An early elevation sketch of the Go-an teahouse by Terunobu Fujimori.

Sadly, however, it seems that few visitors will be able to experience the hospitality of the temporary tearoom during its 67-day run. With Tokyo facing rising numbers of coronavirus cases, a state of emergency has recently been declared for the duration of the Olympic Games-and for the first time in history, there will be no spectators allowed during events. 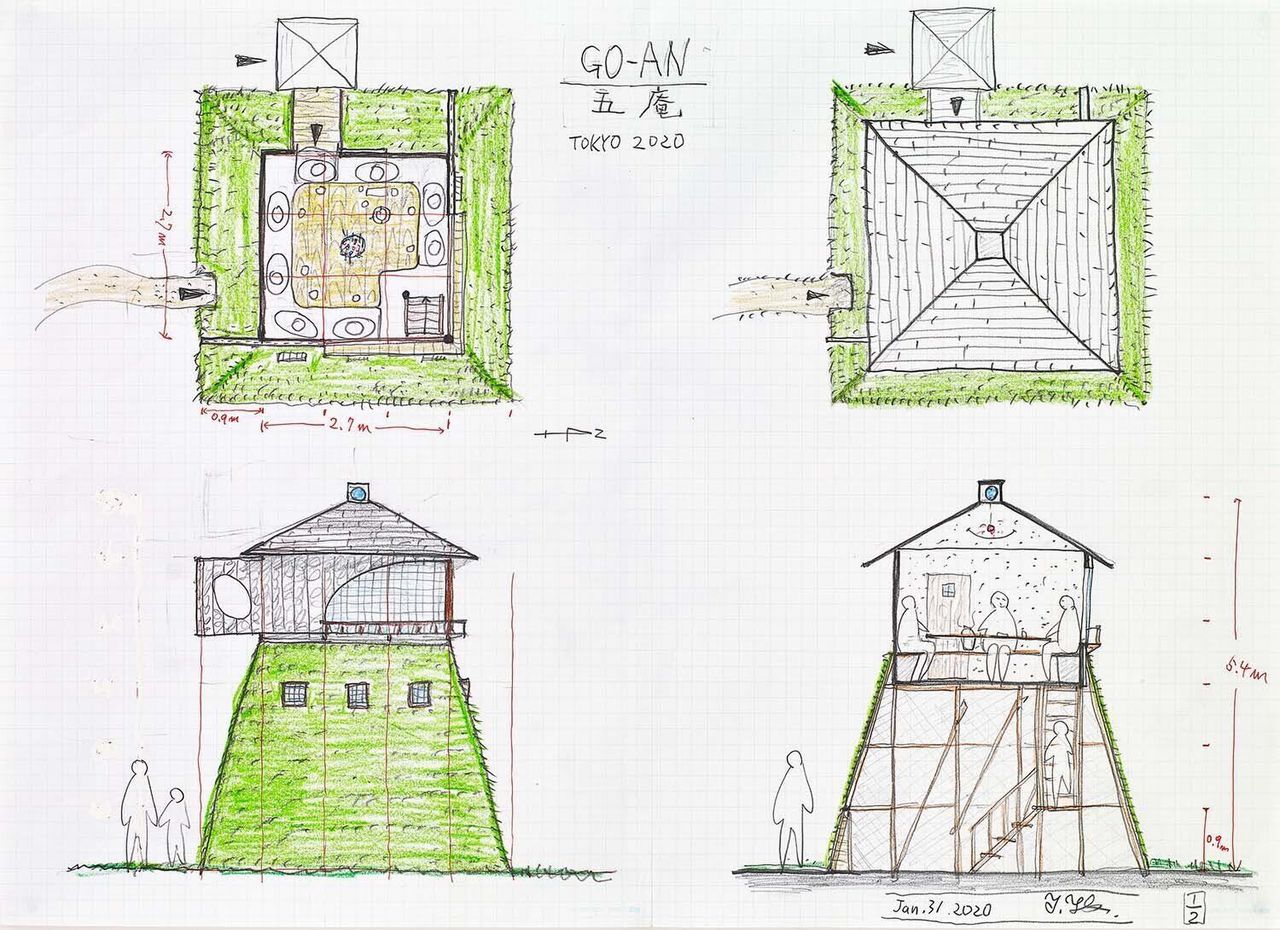 Elevations and plans showing the initial concept for the Go-an Teahouse by architect Terunobu Fujimori.