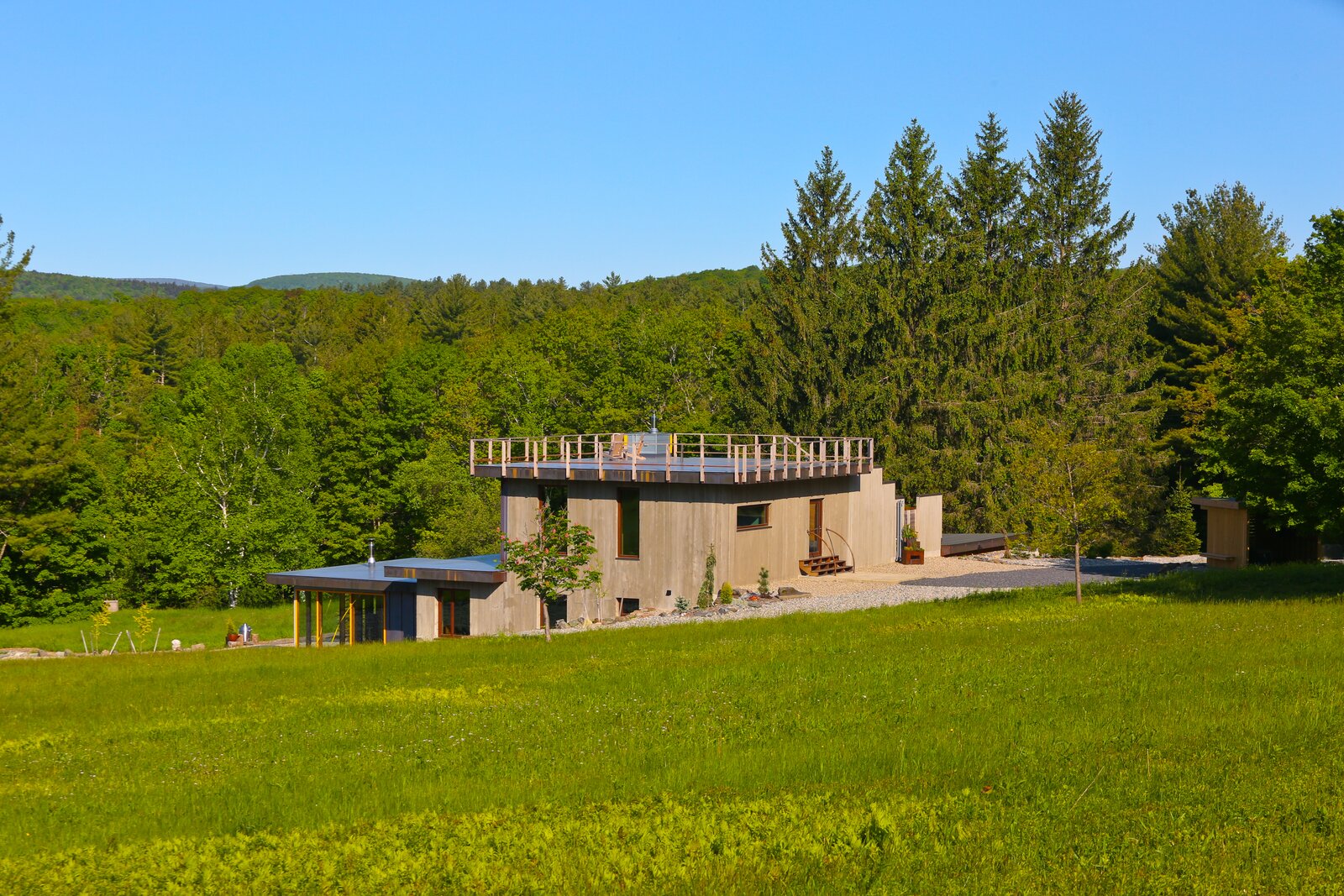 A Secluded, Industrial-Style Home in the Berkshires

Salvaged wood interiors flesh out a skeleton of concrete, glass, and steel in the Mohawk Trail State Forest. The property, located in the small town of Florida, is part of the protected Mohawk Trail State Forest. "A goal was to move from one spectacular setting in the Berkshires to one that was under less development pressure," explain the owners, who previously lived in an A-frame home designed by two Frank Lloyd Wright acolytes. 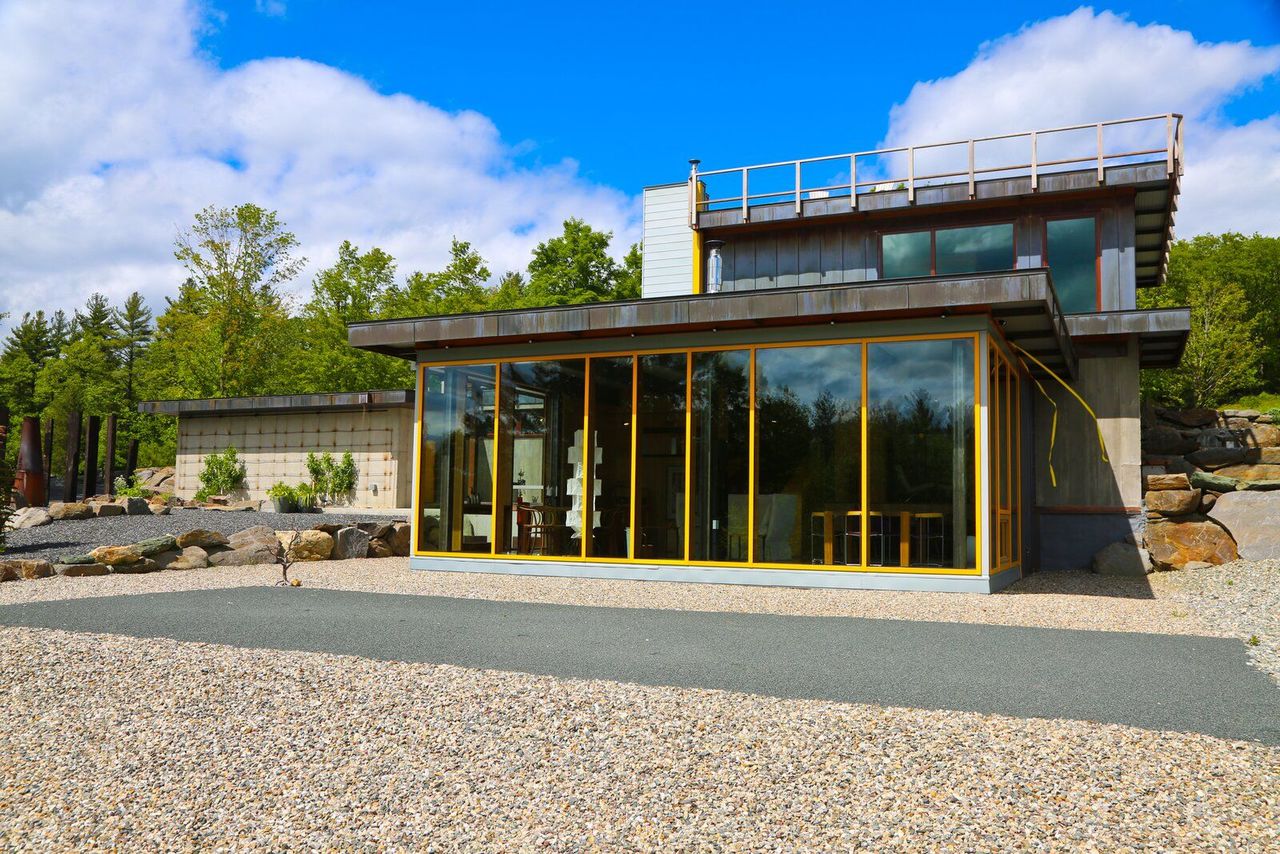 Bright yellow trim lining the floor-to-ceiling windows on the lower level pops against the exterior blend of concrete, steel, and glass.

Yet, it was the inviting community that sealed the deal. "Discovering the people and community of Florida became the core of our decision to move here," the owners continue. "No one conformed to a stereotypic image. Young and old seemed to not only respect, but also actually like, each other." 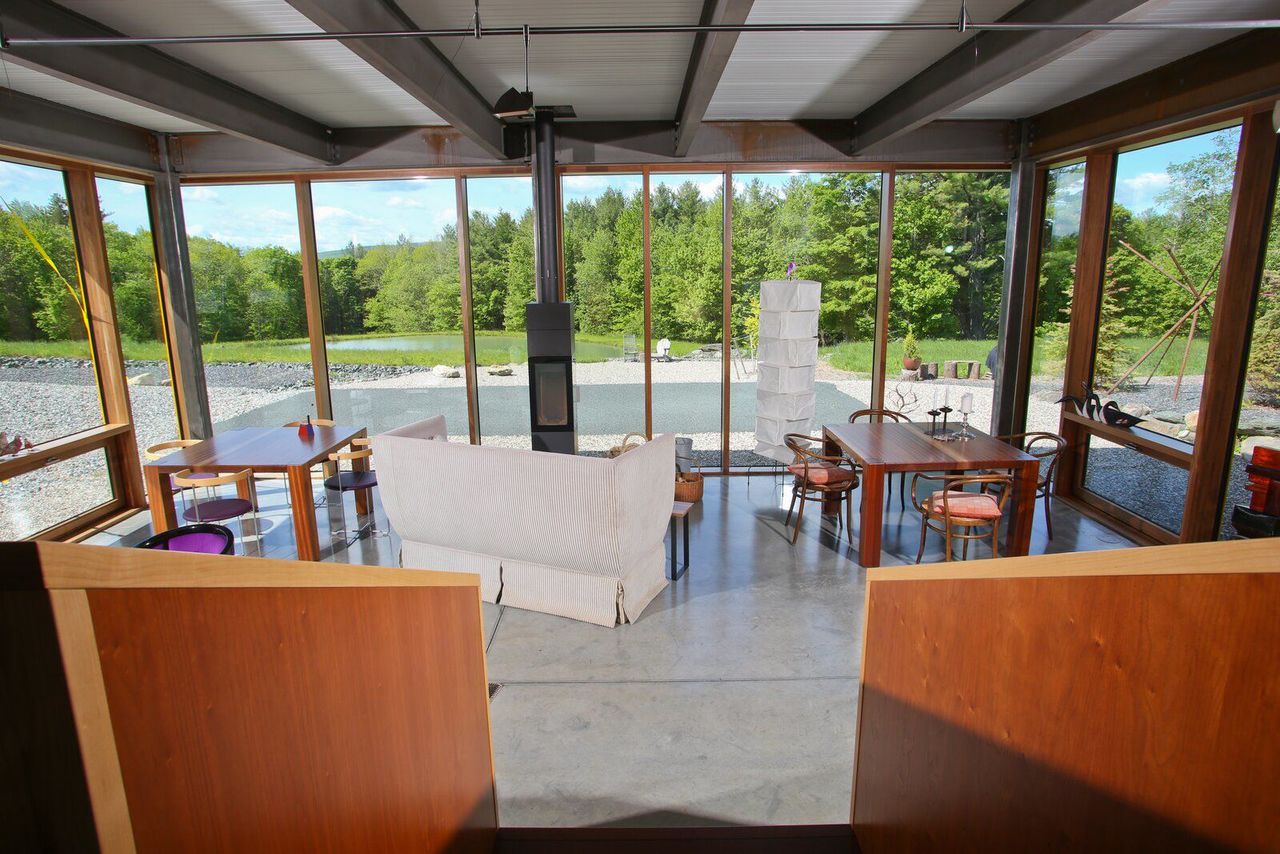 Glass wraps around three sides of the primary living room, which the owners call their sunroom, framing captivating views of the surrounding forest and meadows.

After acquiring the lot, the couple quickly got to work on crafting their dream home, which resulted in a multilevel retreat of concrete, steel, and glass. "Working with concrete and steel was not our first idea, but it became the idea that set us free," they say. "We wanted to display these materials as a visible center for the design, where the bones of the structure had a voice."

It was a young, energetic structural designer who "made the impossible possible" by designing "two unthinkable spans of bridge iron." This enabled generous, open interiors and broad windows and accentuated the steel-and-concrete form. A more intimate seating area is nestled near the wooden staircase that leads to the office.

To balance the more industrial elements, the couple incorporated handcrafted woodwork salvaged from their previous property, where a devastating storm brought down a total of 50 hardwood trees. "Something at the time told us to harvest the wood, rough-saw it, and begin the process of slow curing," they say. "Now, more than 10 years later, these trees have become beautifully bright, patterned paneling throughout the new house." 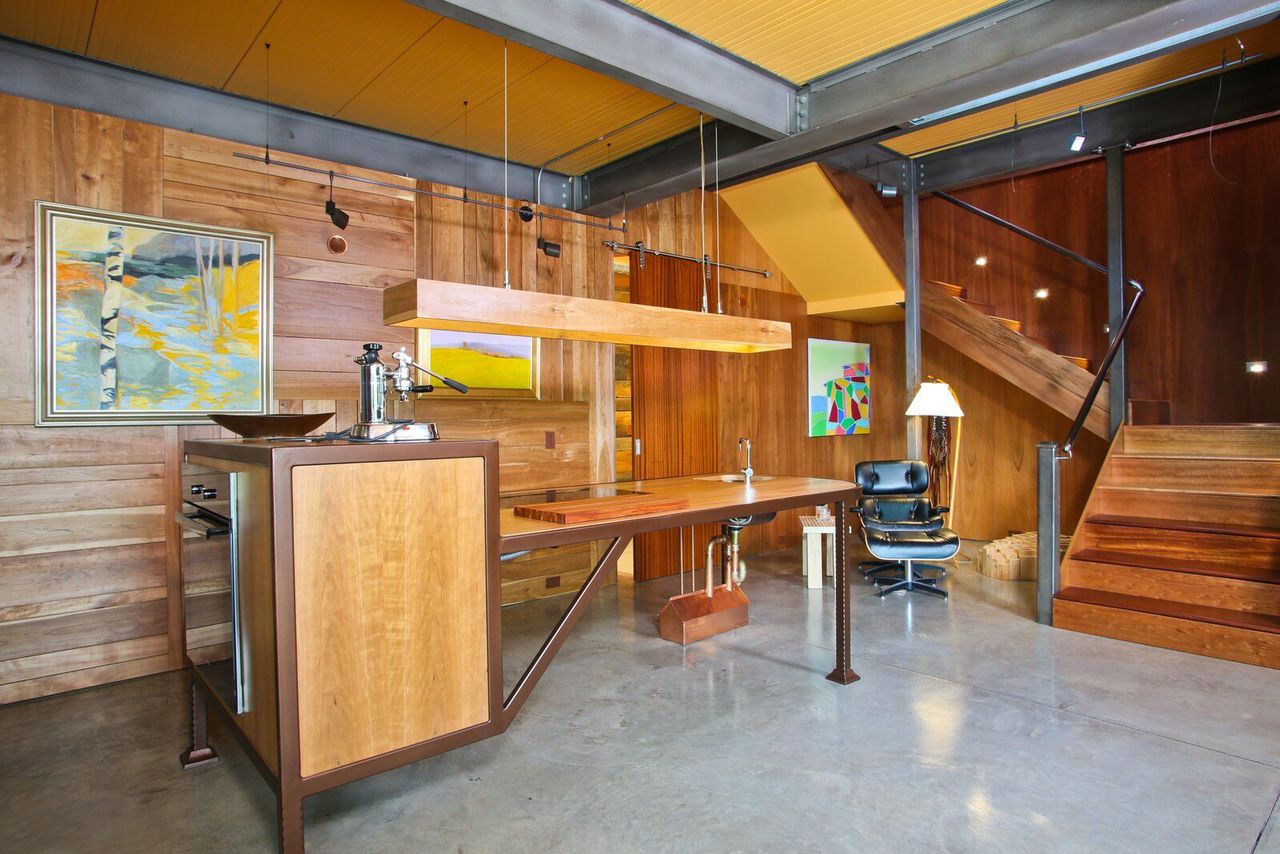 The kitchen is also personalized, divided into two sections: a prep room and a cooking/serving area with a large island and L-shaped banquette. The idea was to separate guests from the back, which "serves as a hidden, but very stylish, scullery for cleanup and supplies," say the owners. 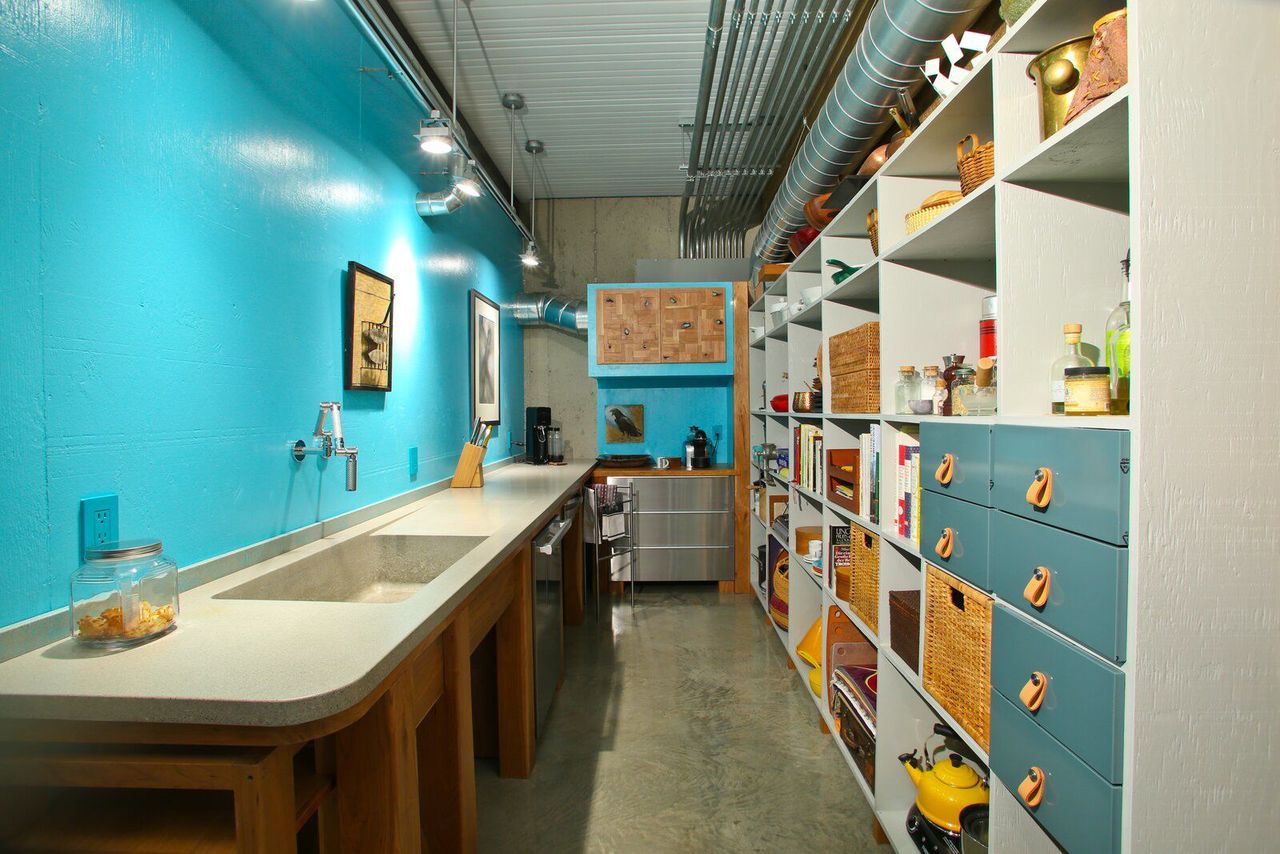 The principal suite occupies the entire upper floor and has a separate entrance from the outside. Also on the property is a renovated guesthouse dating back to the 1930s, where the couple stayed while building the main residence. "All around the house, whether it be inside or out, there is an appealing place to enjoy the light," note the owners. An underground, naturally cooled room for wine and beer is connected to the kitchen scullery. 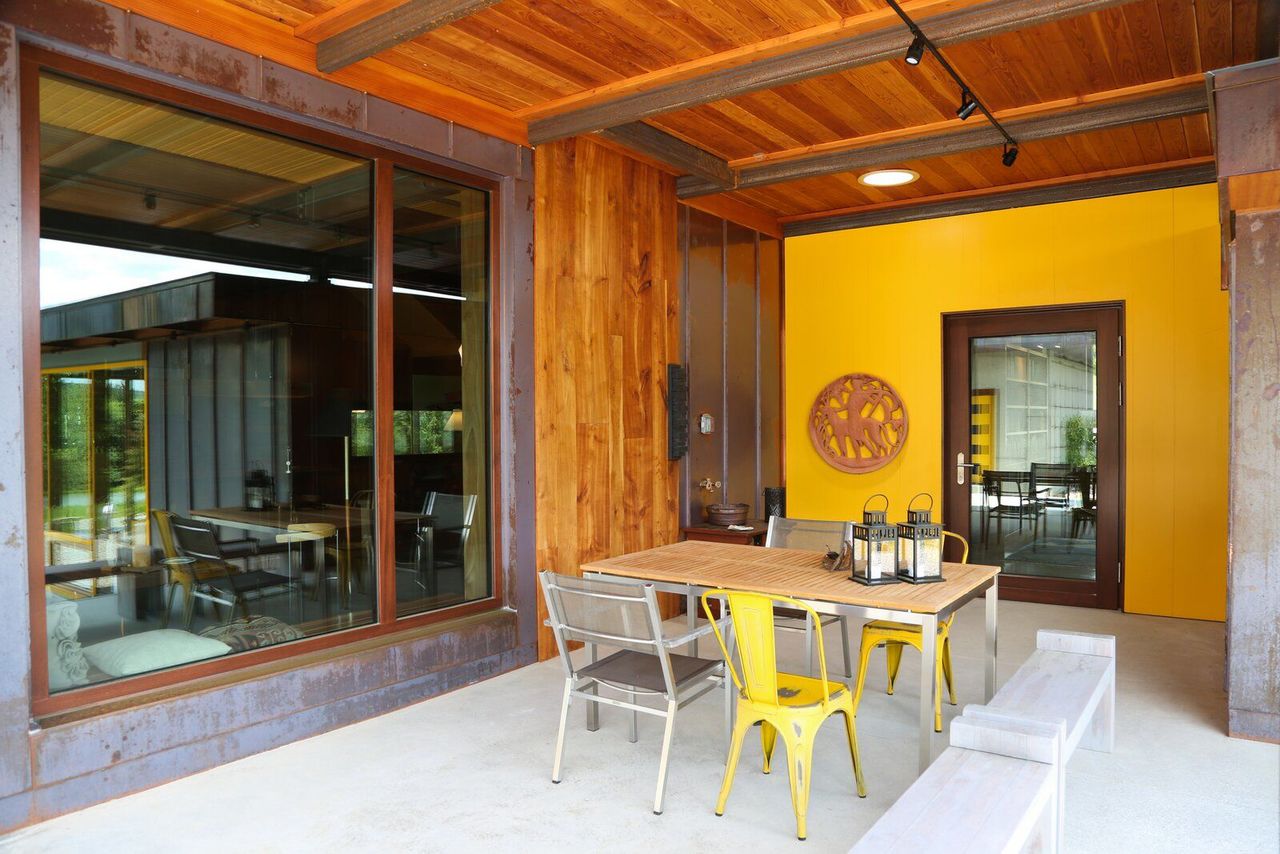 A covered outdoor eating area, located off the kitchen, overlooks the forested lot. 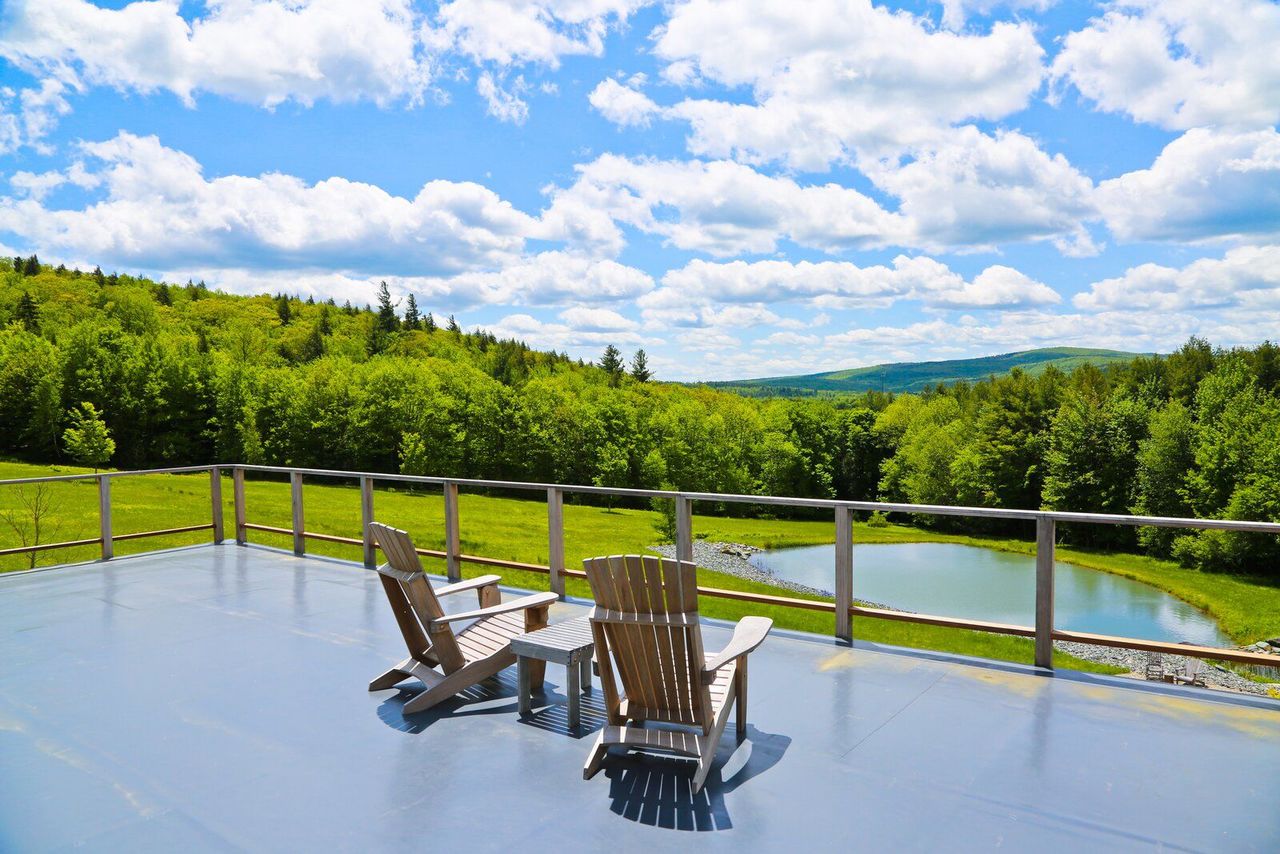 The various flat roofs that cap the home also serve as spacious decks. 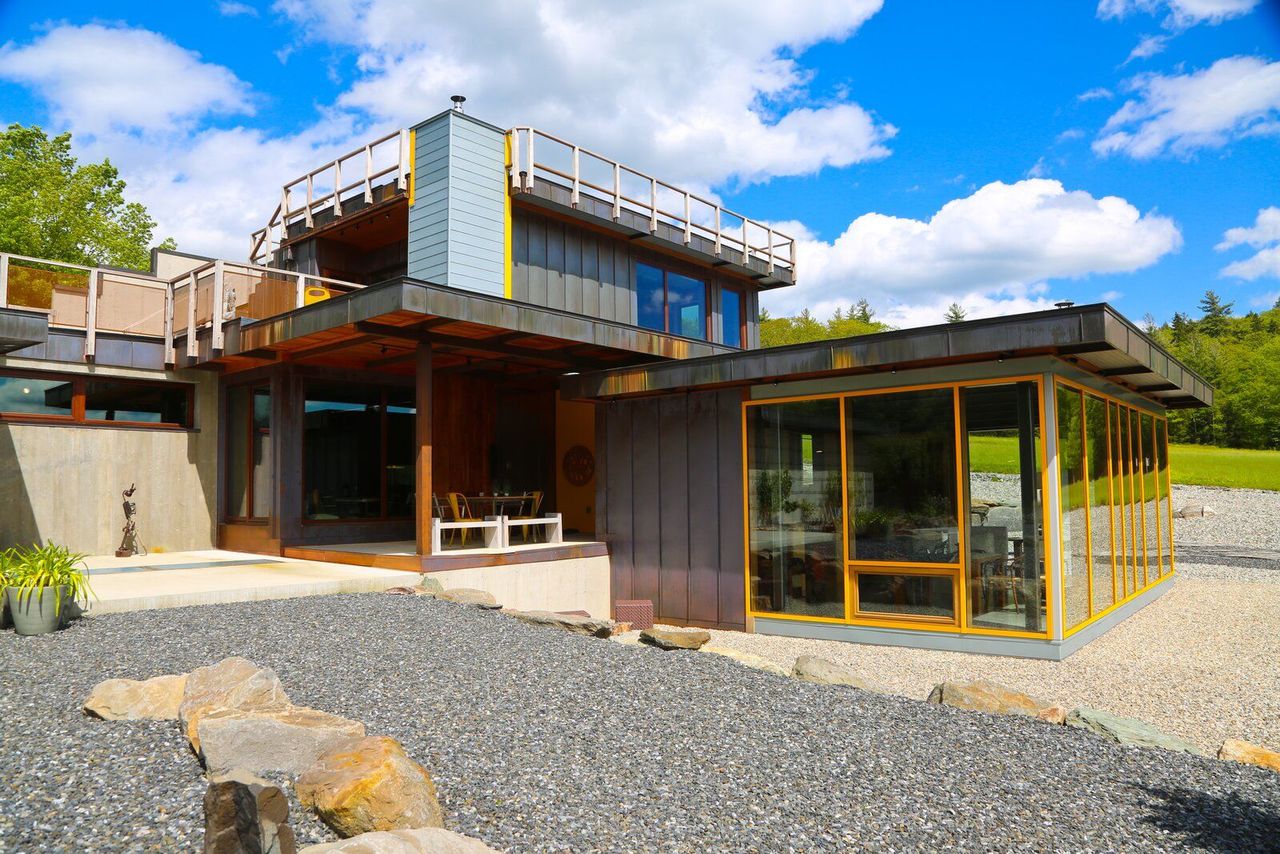 Another view of the exterior, which highlights the unique unfolding of the home. A peek at the detached guesthouse, which the owners completely renovated to make it more consistent in style with the main home. The small yet fully equipped space comes with two bedrooms, as well as a living area, kitchen, and bath. An aerial view of the property, showcasing the main residence, the guesthouse, and a work barn which could also be used as a studio.