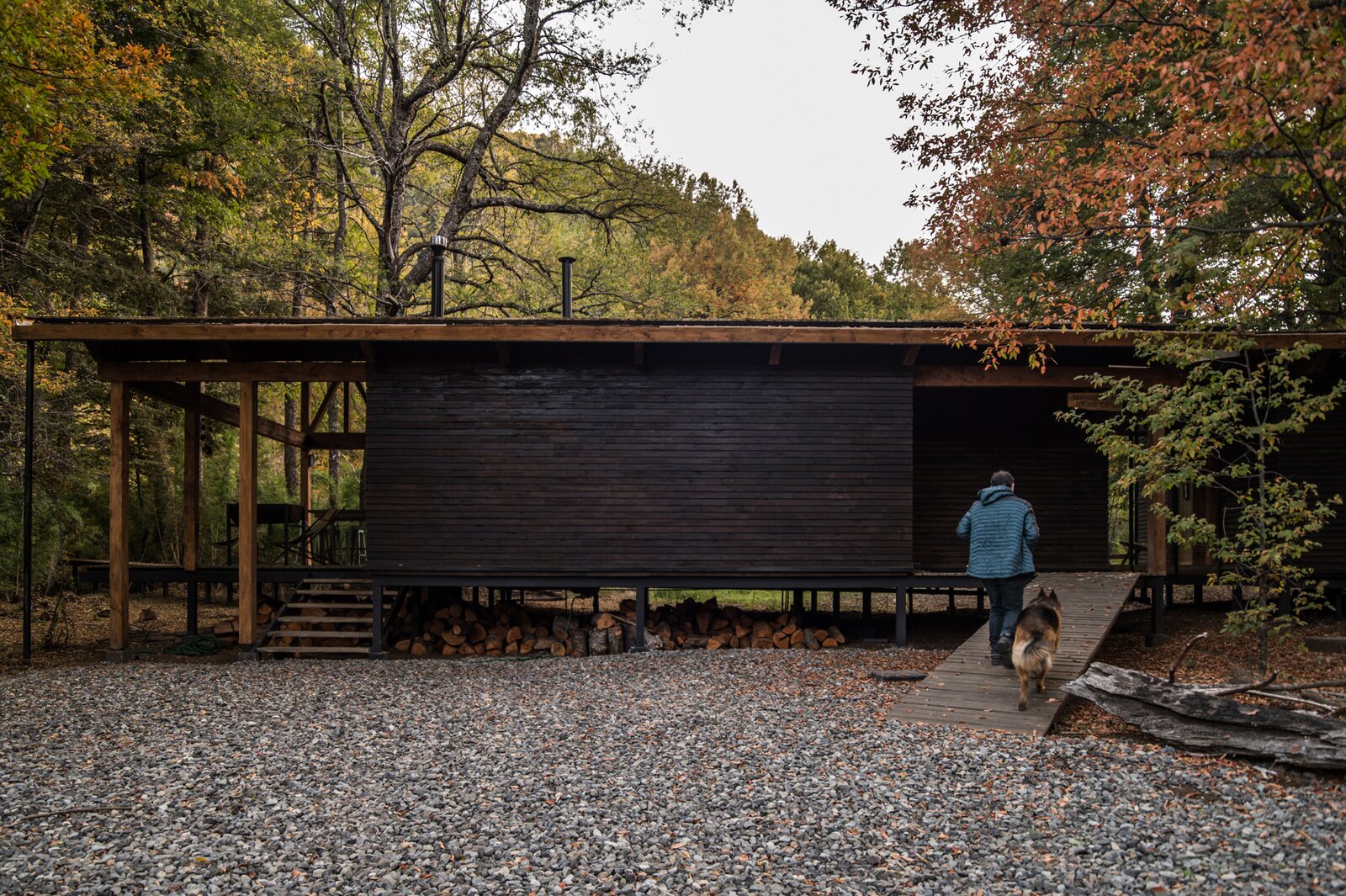 A Remote Chilean Cabin Appears to Float Above the Forest Floor

In the Andes, architect Sergio Araneda creates an ecological refuge that embraces the surrounding woods and treads lightly on the land.

In Chile-a country known for its natural beauty-Malalcahuello is something of a hidden gem. Located in the heart of the Araucanía Region, about 400 miles south of Santiago, the mountainous town is home to two national reserves rich with evergreen forests and dramatic landscapes dominated by volcanoes, streams, and lakes.

It’s an environment that’s at once imposing and inspiring, not to mention extremely challenging to build in-just ask architect Sergio Araneda of SAA Arquitectura + Territorio, who recently completed a home in Malalcahuello for a couple from Santiago. 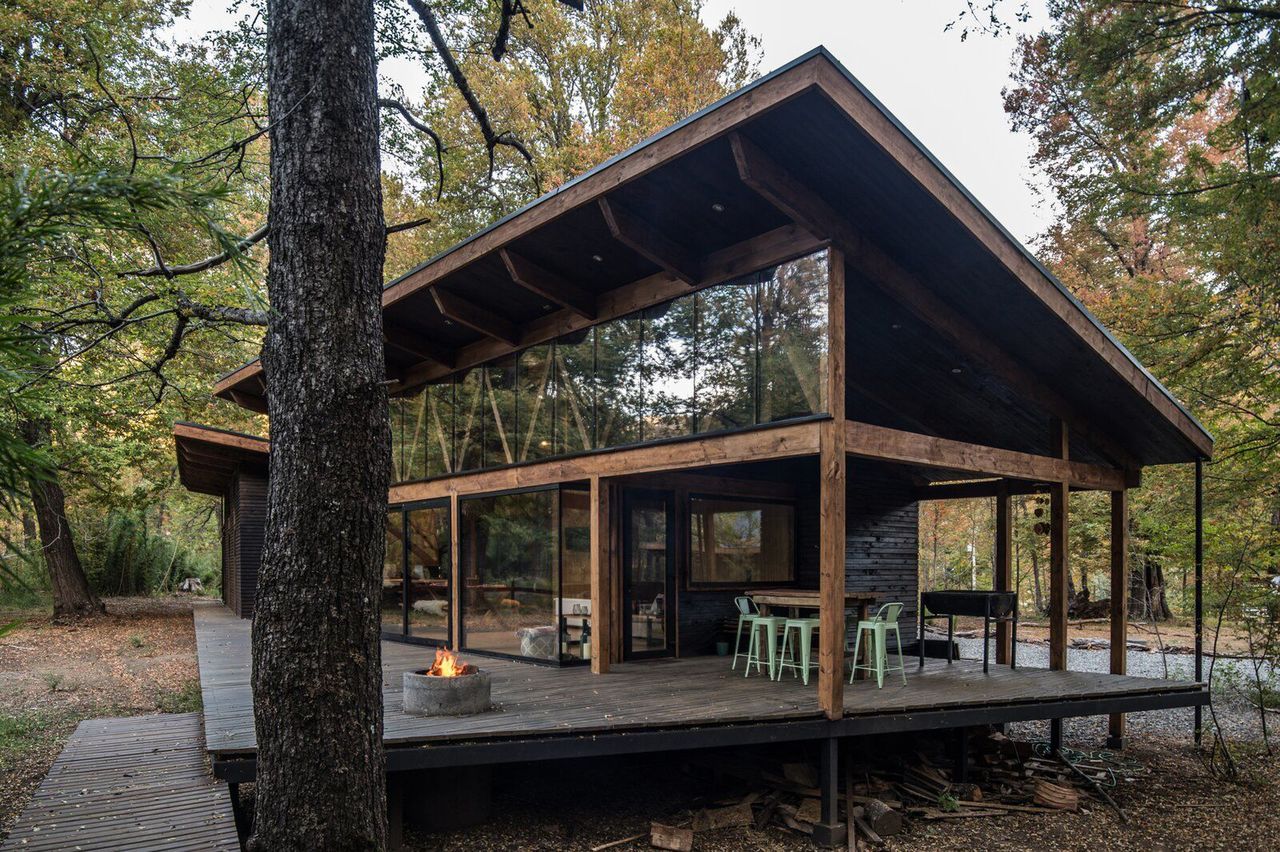 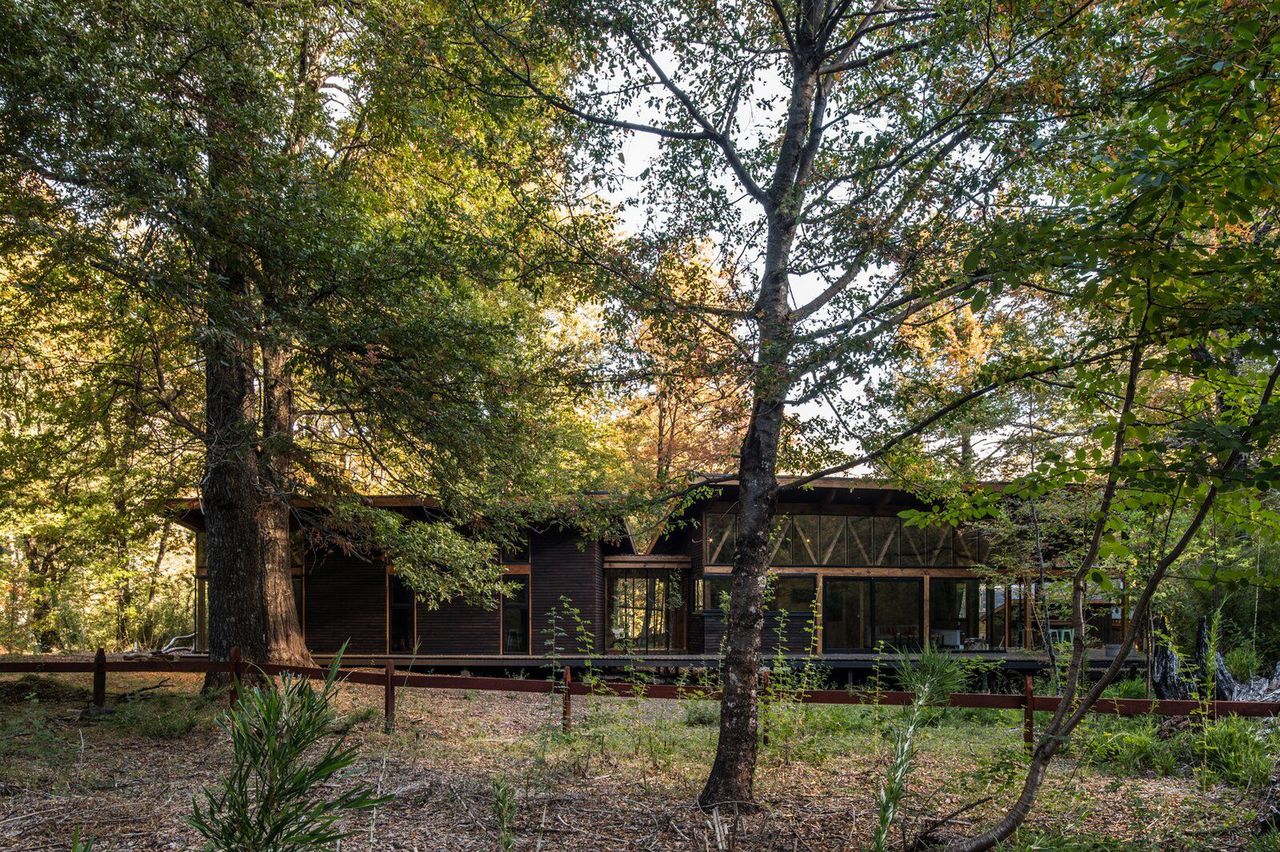 The home is surrounded by a dense, ancient forest that Araneda embraced and preserved with an environmentally friendly design that incorporates natural ventilation and maximizes sunlight.

His firm is dedicated to working in Patagonia, calling it "a privilege and a huge responsibility" to design and build in such a fragile landscape-and it was this deep understanding of the region that attracted these clients.

"We chose them for their holistic approach to solving complex issues," say the owners, noting that Araneda’s firm understands "that the territory it inhabits is as important as the house itself. They are genuinely environmentally conscious and design with a vision for future generations." The Malalcahuello region is known for its dramatic landscapes with thick forests, lakes, streams, and volcanoes. It is home to two nature reserves. The home is elevated to protect it from humidity, provide ventilation, and preserve the biodiversity of the forest floor.

The couple had left the city during the pandemic, and they wanted a home where they could connect with the forests and mountains. Araneda embraced the remote landscape with a timber-clad residence that appears to float above the ground.

Two volumes-one for bedrooms and bathrooms, the other for living and common spaces-sit at a slight angle to each other, connected by a glass hallway that offers views of the surrounding trees. 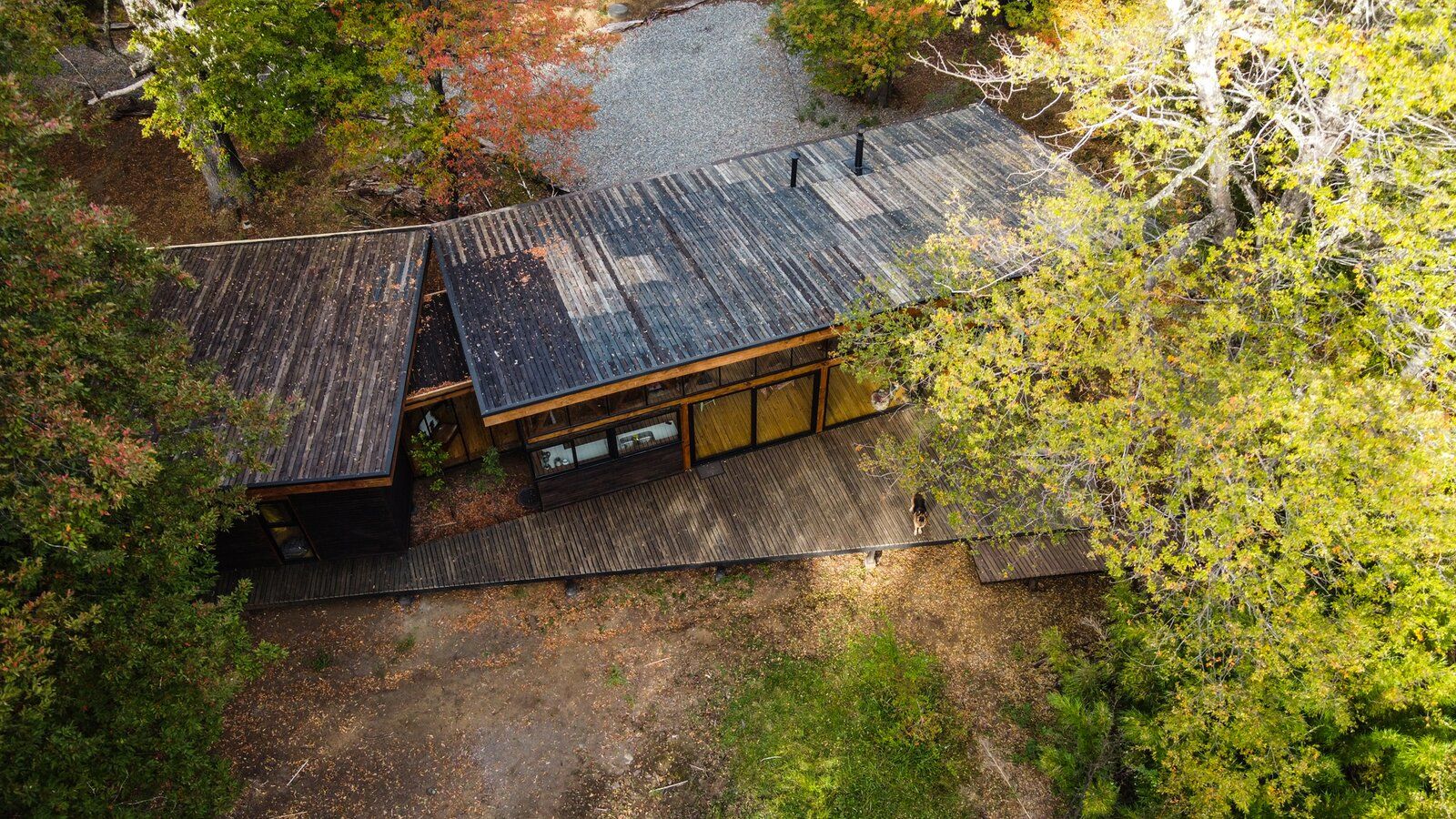 Public and private spaces are split between two volumes, connected by a transparent hallway that lets in light and views. 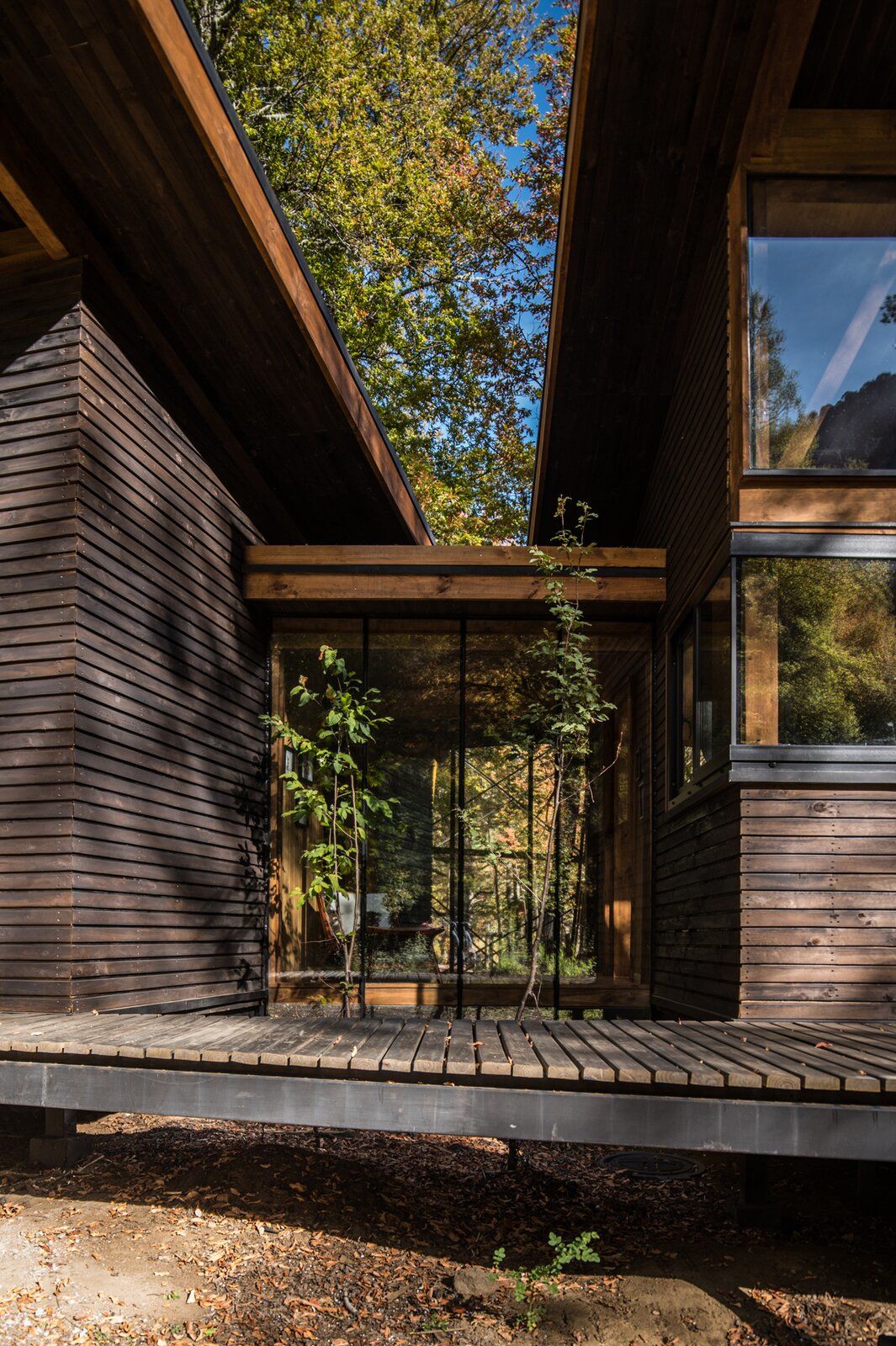 The hallway looks out onto a small alcove beside the wraparound deck. 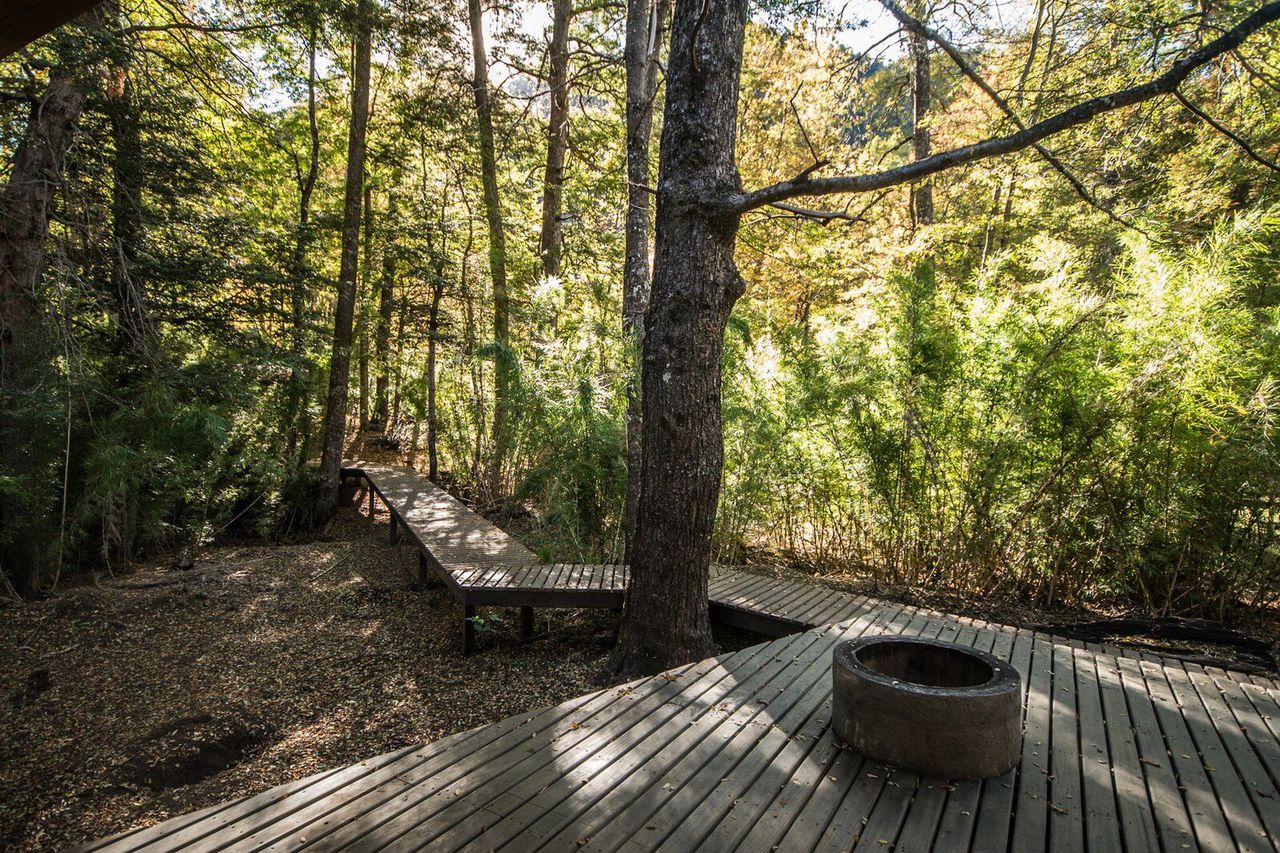 A built-in fire pit on the deck is shielded from the elements by the roof overhang.

A large wraparound deck and elevated walkway extend the home into the dense, ancient forest, which Araneda took great care to conserve. The 15.75" elevation of the structure not only allows for natural ventilation and humidity control, but it protects the biodiversity of the forest floor.

The region experiences heavy snowfall, so the roof membrane was designed with a strong hardwood that can withstand falling branches, a common occurrence in the winter. 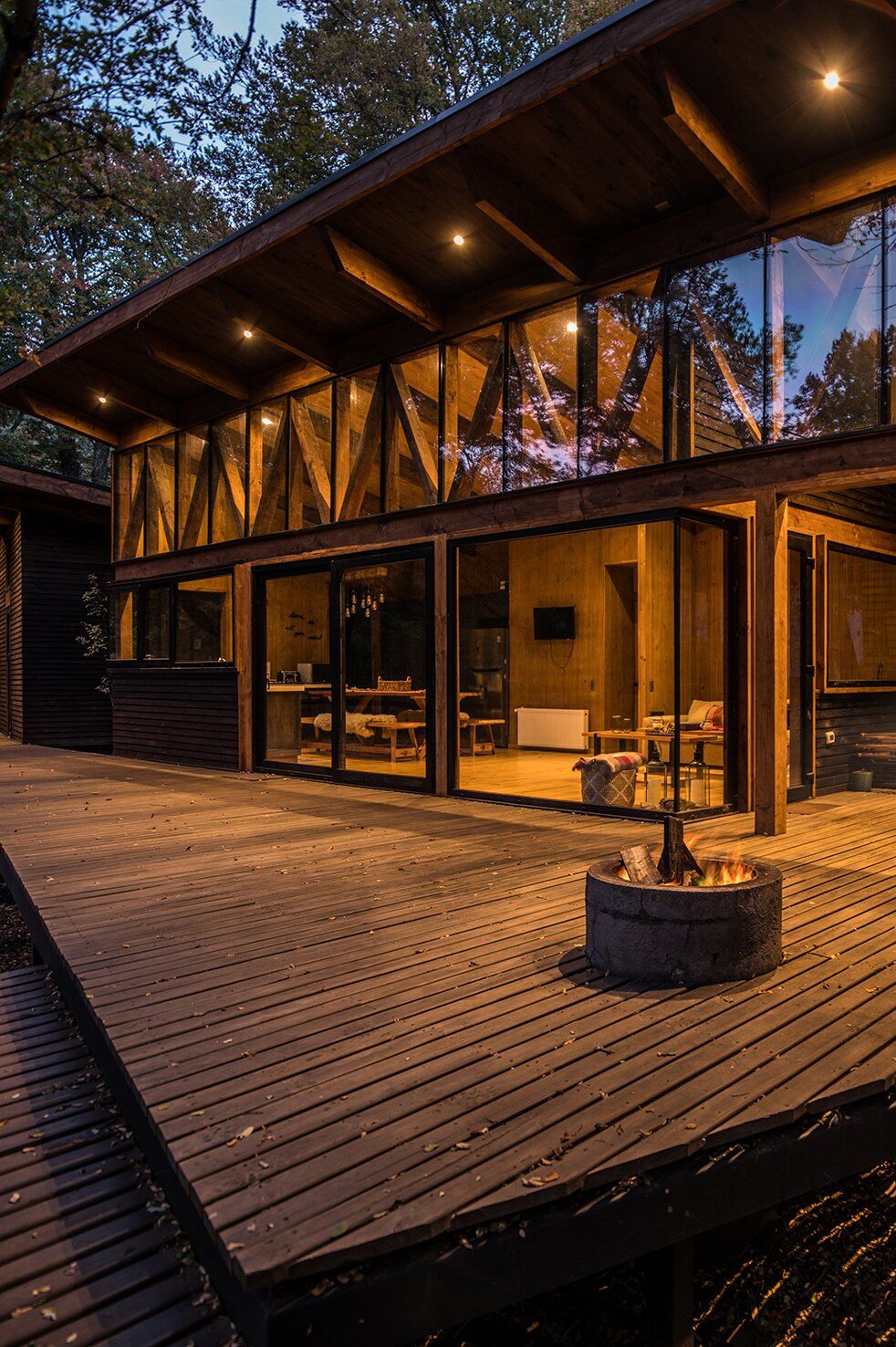 The home has more than 850 square feet of terrace space. 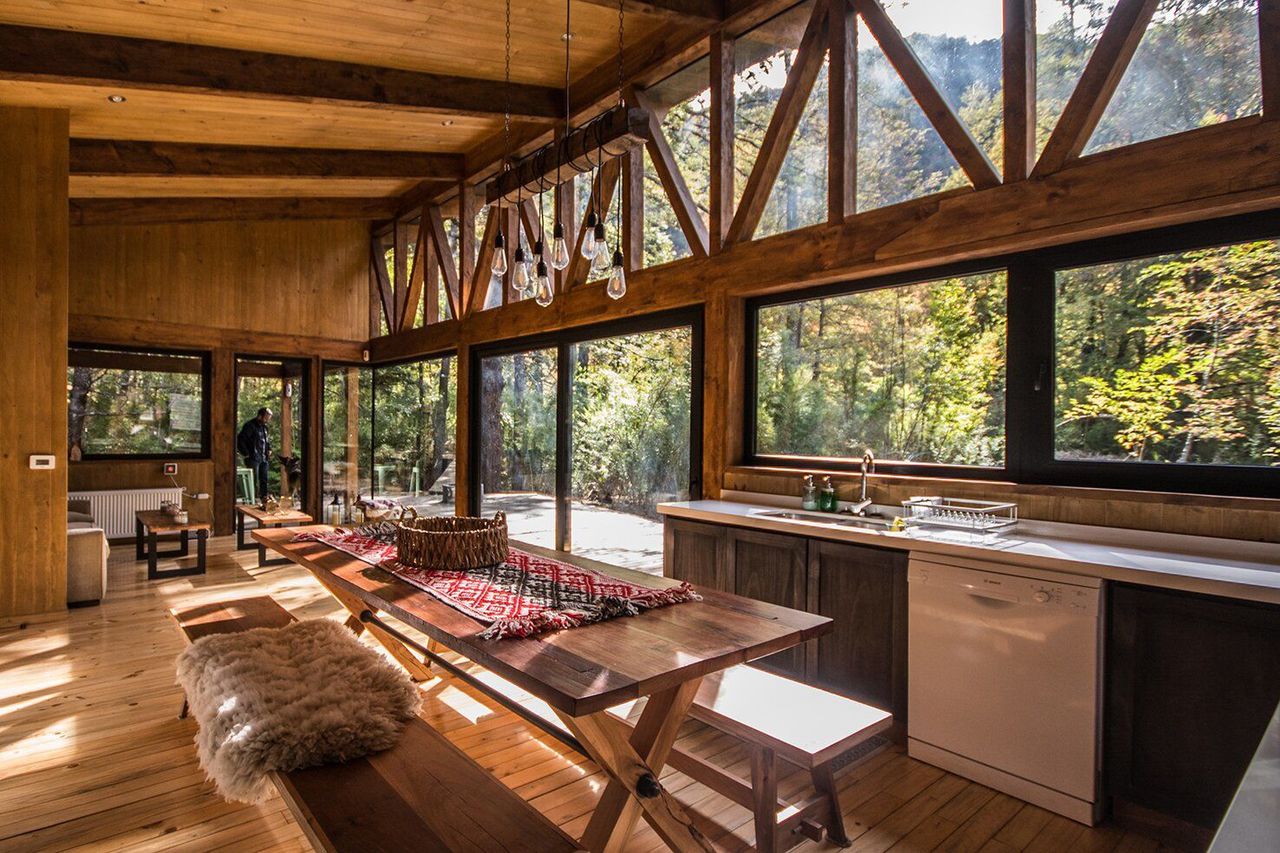 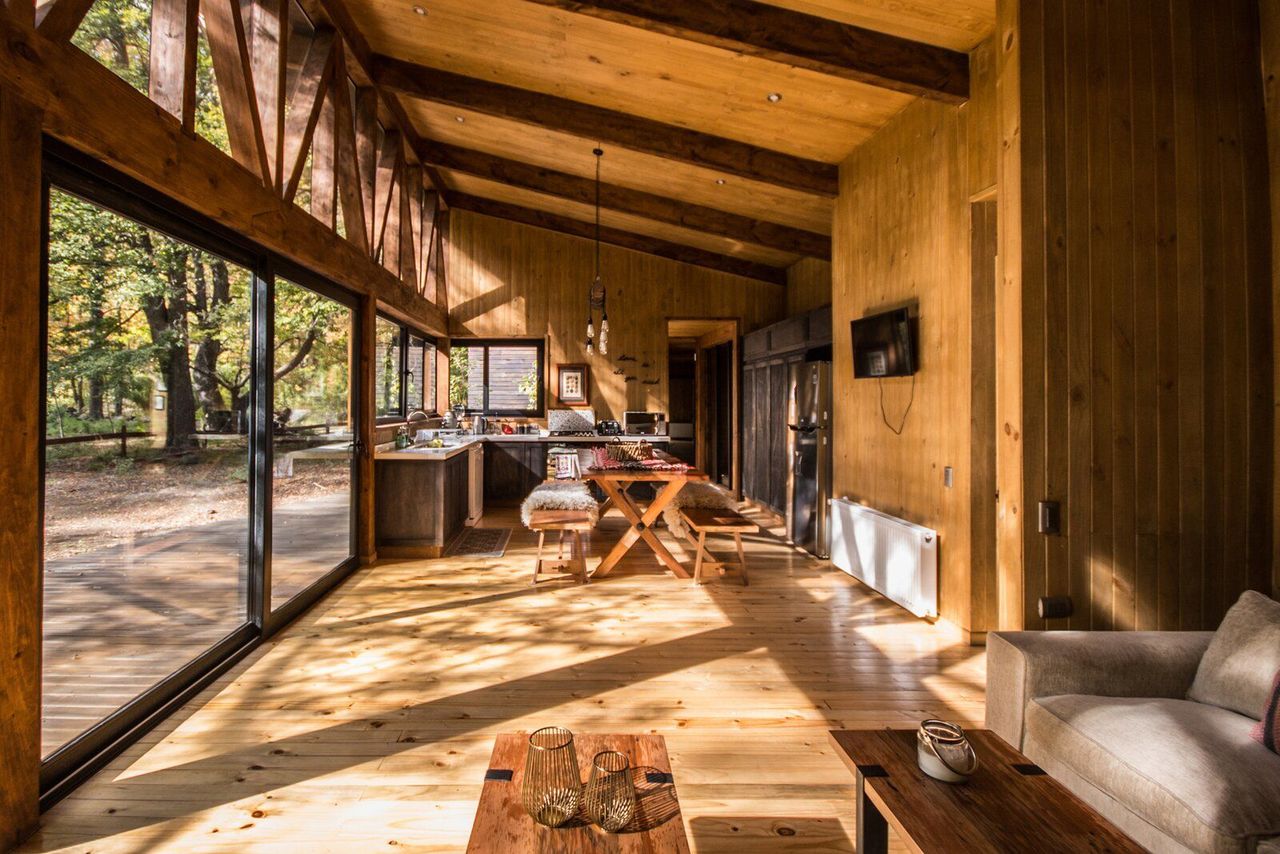 Walls of Thermopane windows allow for a sunny interior while providing superior insulation against colder temperatures.

The home is oriented in relation to the movement of the sun, and walls of windows let daylight stream in, while framing the local "art"-the native robles, coigües and raulis trees of southern Chile.

"Connecting with nature stimulates and balances your senses," say the owners, "and this house achieves that aim." 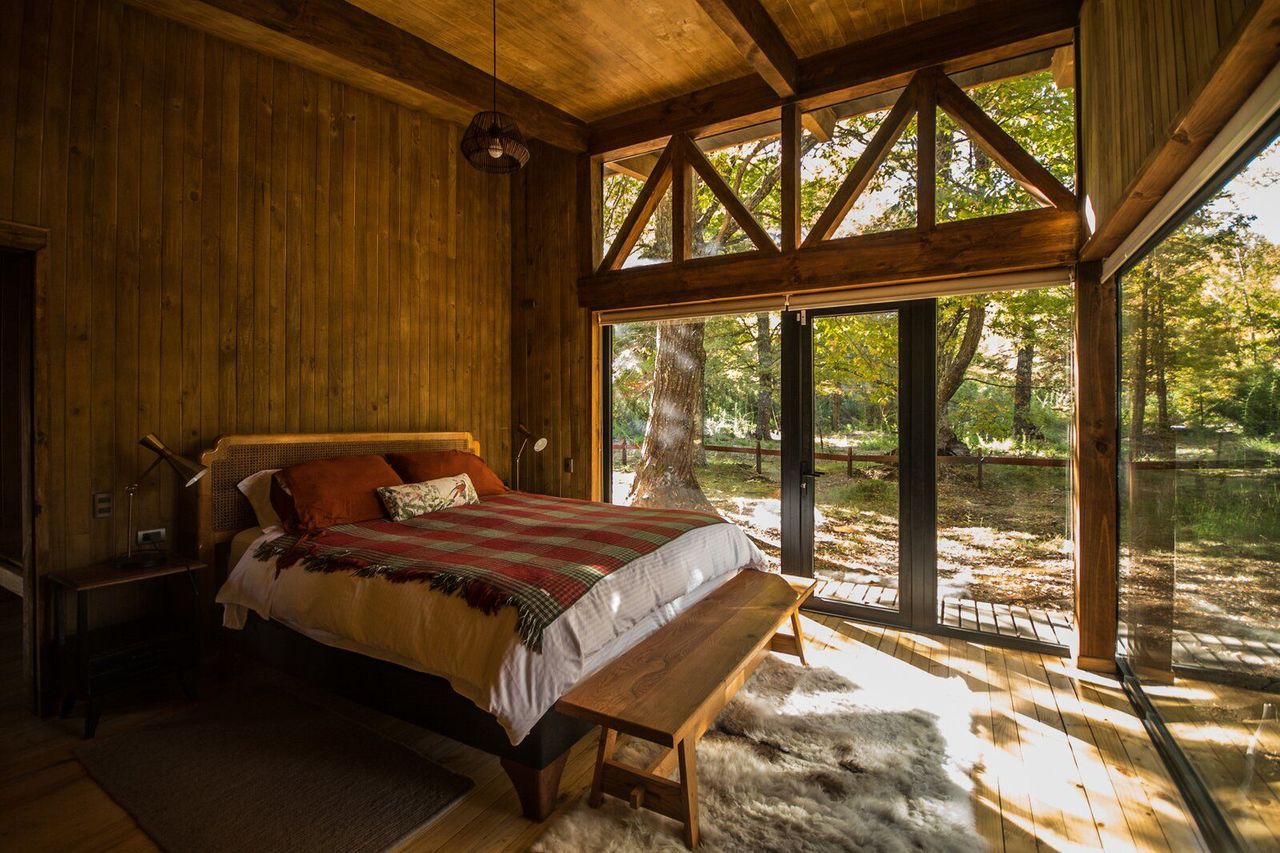 Local carpenters were employed to build the home. 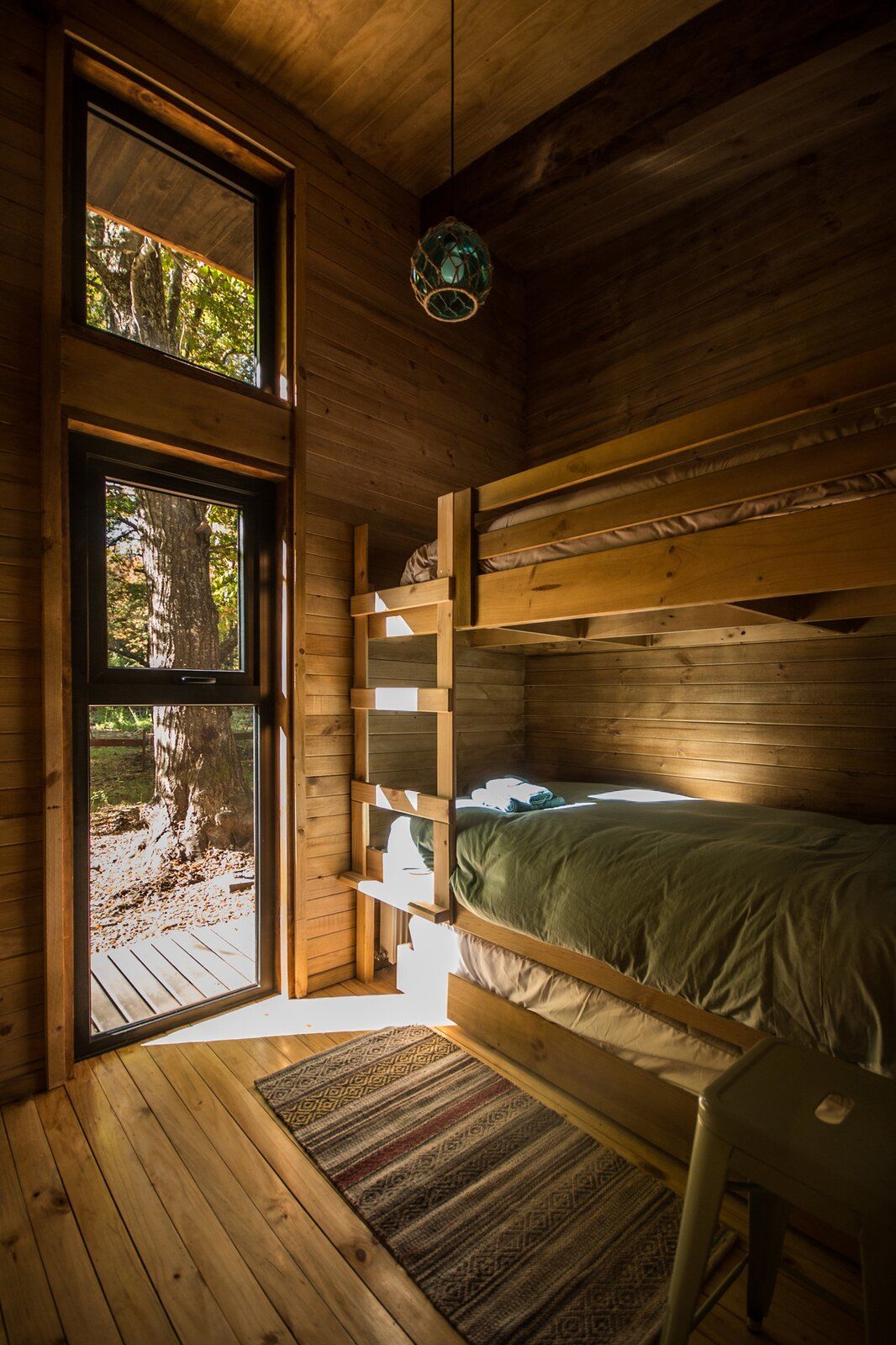 A ray of light illuminates the home’s bunk room. A furry friend rests on the deck of the Coyan Refuge.