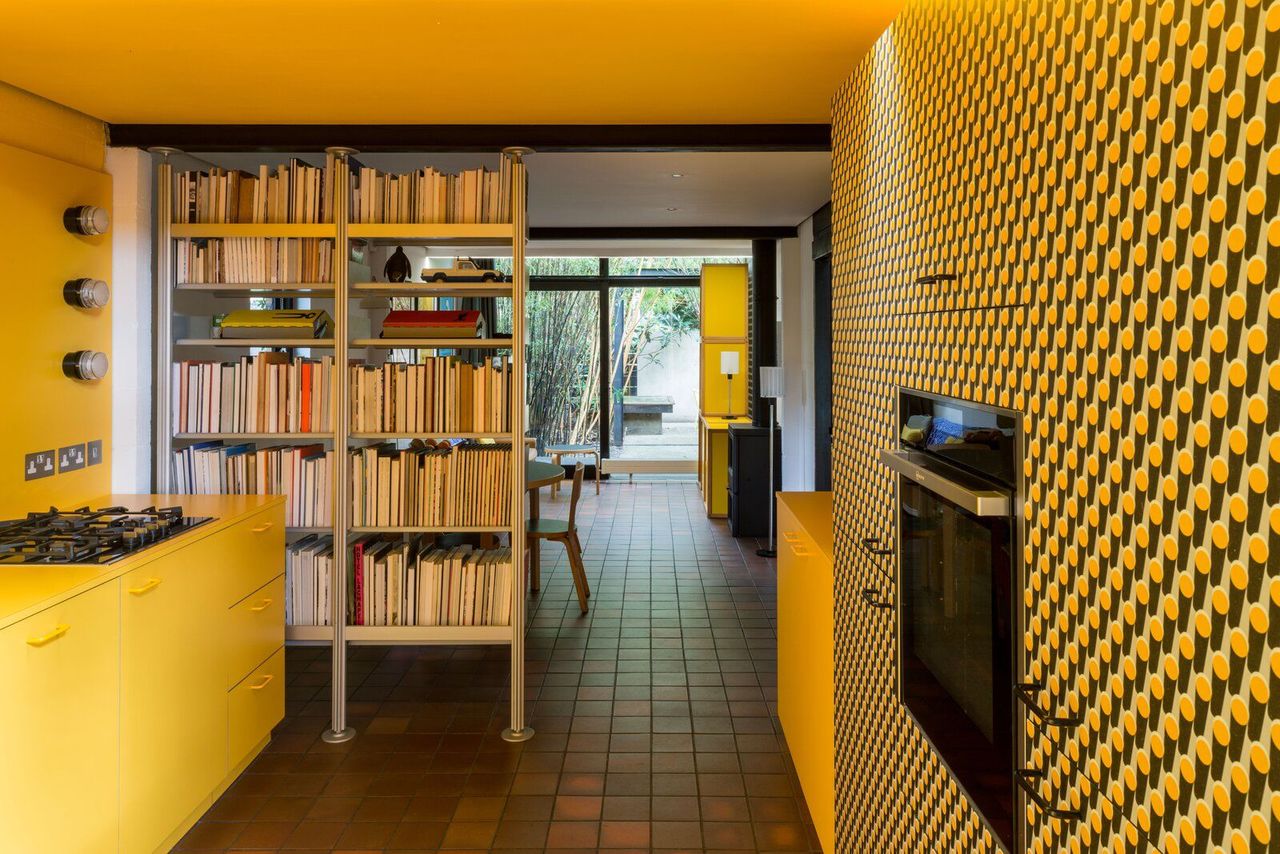 A Rare London Midcentury Bursting With Brilliant Color Pops Up

The 1979 courtyard home beams with bright hues after a playful revamp by Studio MacLean.

In South London, just between Camberwell Grove and Grove Lane, sits a hidden architectural gem. Positioned amidst a row of light-colored brick garages, the single-story dwelling was designed in 1979 by British architect Martin Crowley to serve as his family residence. 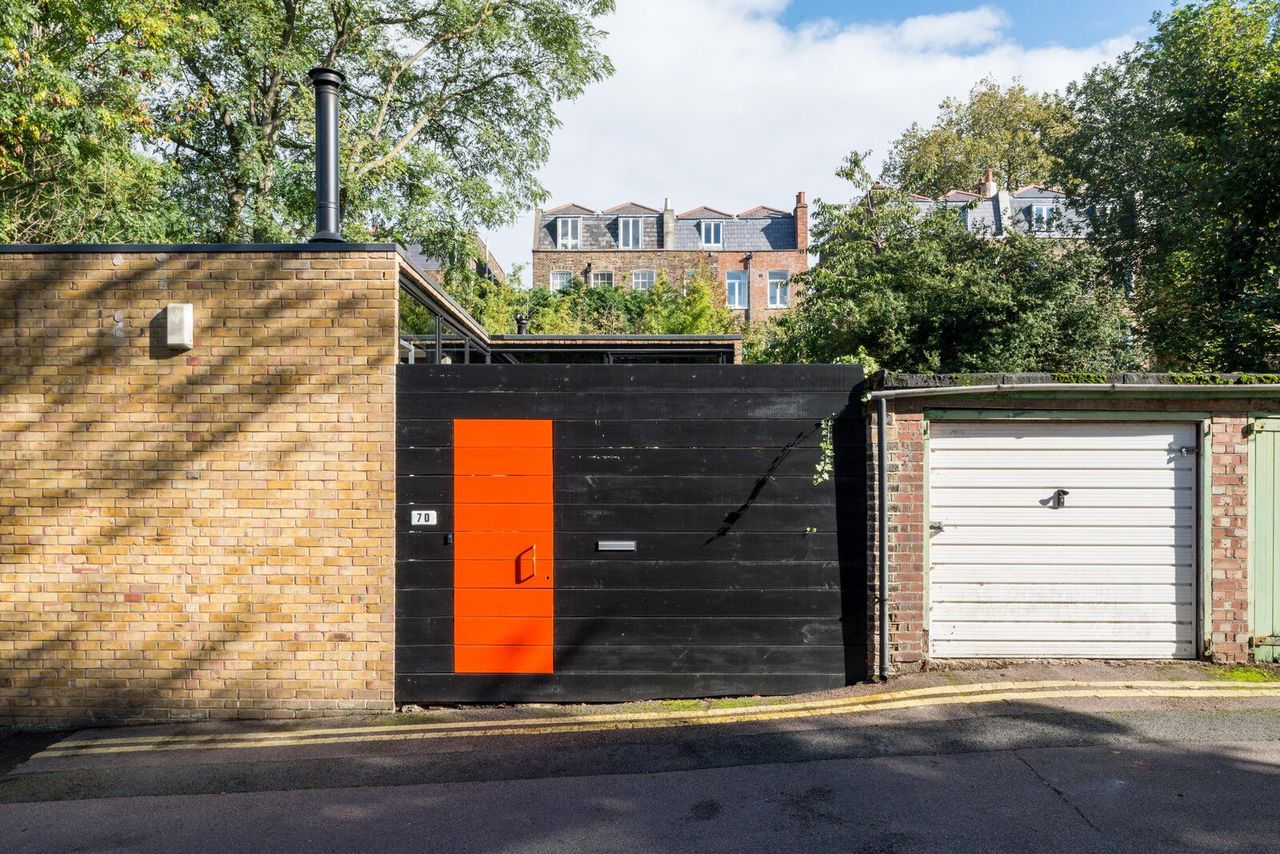 The home was designed in 1979 by British architect Martin Crowley, and planning permissions stipulated that the home had to blend into the neighborhood. Thus, Crowley positioned the single-story structure discreetly behind a modest wood-clad exterior sandwiched between garages. Today, a brightly painted door offers a glimpse of the cheerful hues found inside.

"It was the first home that the architect had built for himself," says Jason MacLean, who owns the abode with his partner, Jenny. "Everything about it is clever-the materials, the layout, the position." The couple-who are also the creative duo behind Studio MacLean-purchased the property in 2006.

As avid fans of midcentury architecture, particularly the Eames House in L.A., Jason and Jenny were sold as soon as they laid eyes on the courtyard residence. "It felt like the closest thing to the Eames House that we could get in London," notes Jason. 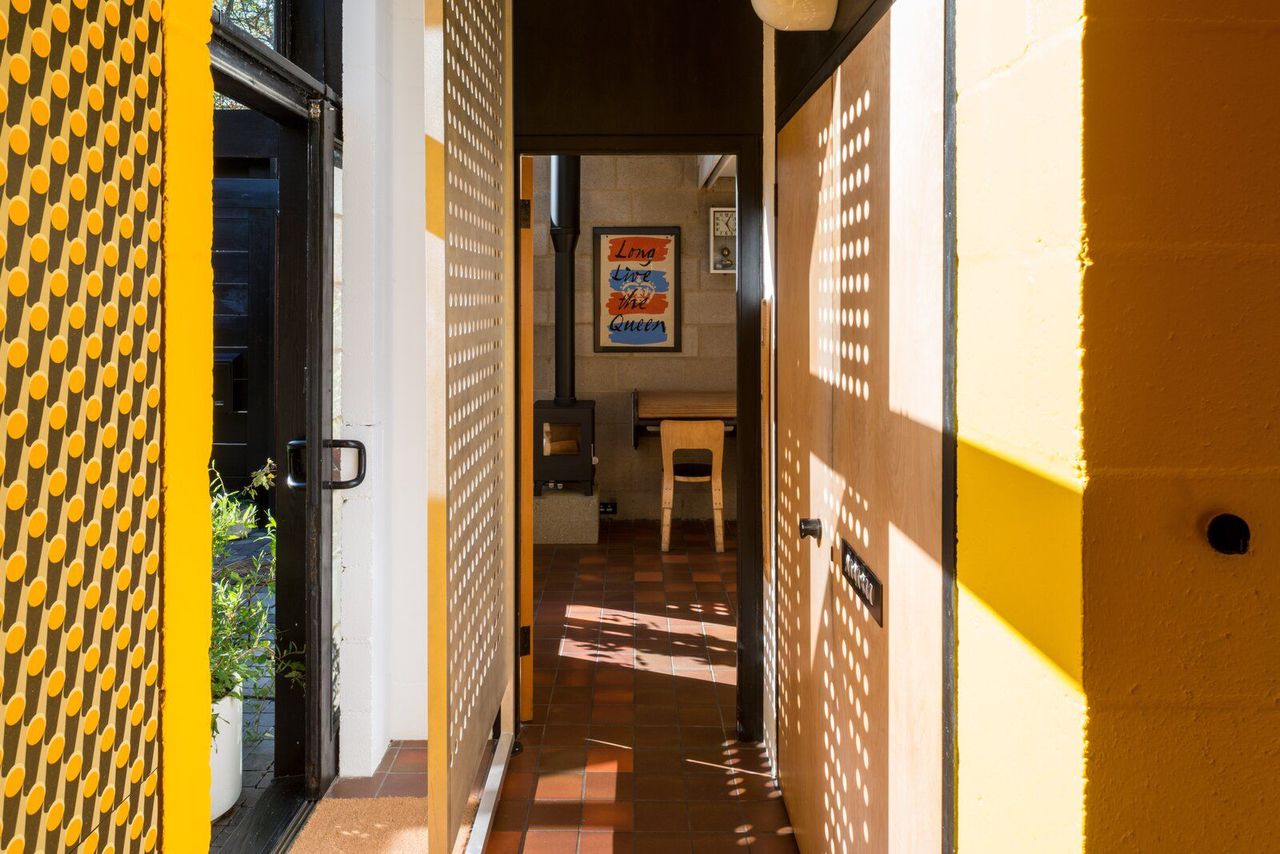 Designed around two courtyards, the home is arranged to track the sun throughout the day, ushering an abundance of light into the interior spaces. The main entrance looks out onto a west-facing walled garden.

"The moment we stepped through the front door, we knew this was it-and we’ve felt the same ever since. I still get that same feeling when I step into the house. It’s like having a bit of California in Camberwell," he continues. 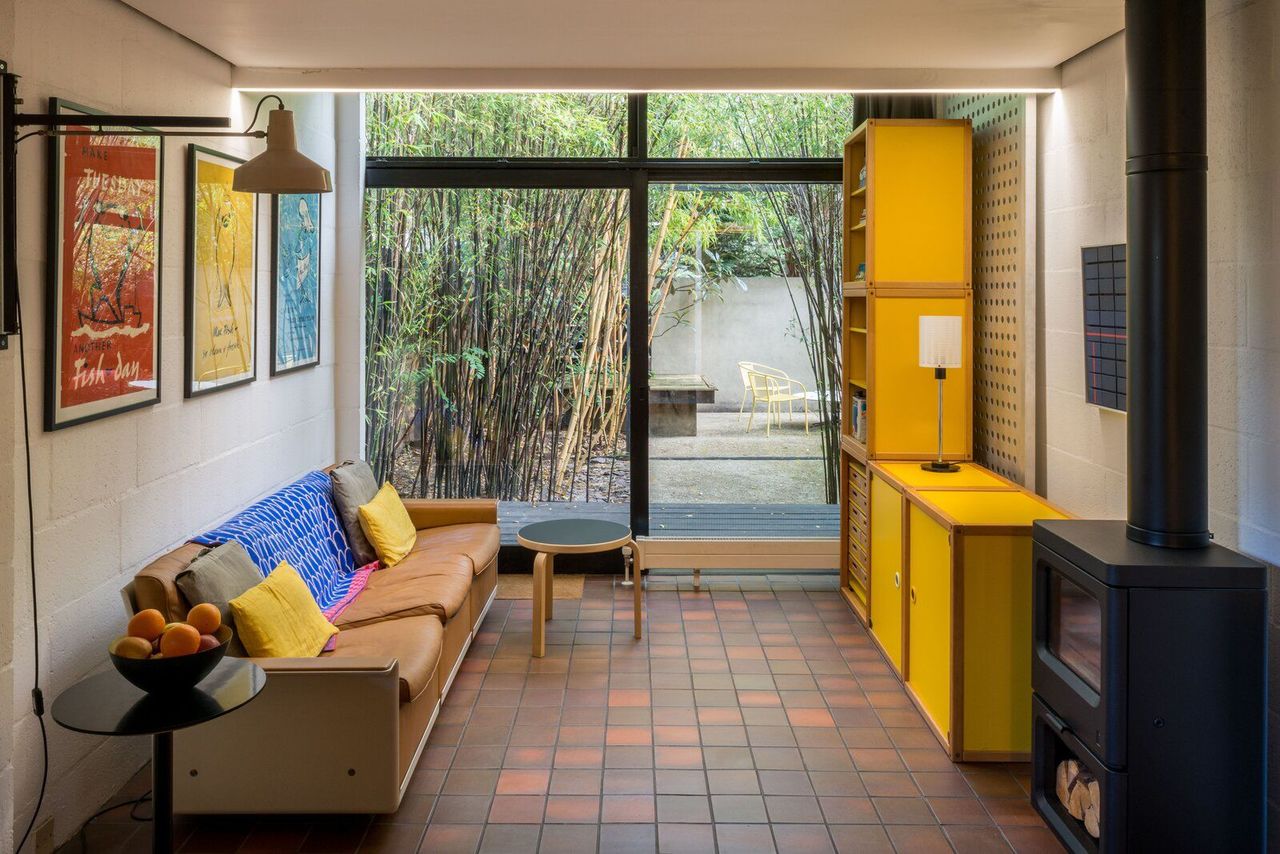 Original details can be found throughout, including the terra-cotta tiles lining the floors.

While the duo gave the home to a quick makeover-including a new kitchen-when they first moved in, it wasn't until last year that they treated it to a complete structural and aesthetic restoration.

"We felt the time was right to do everything we’d ever wanted to do to the house," Jason explains in a recent interview. "Almost everything inside it is now bespoke, including the bright yellow kitchen that we designed. We work with fashion and interiors studio Eley Kishimoto on a lot of our projects, and the kitchen units are clad in a one-off pattern by them called ‘Sun Loving Bollards.’ The color just suits the house so much." A look into the home from the east-facing garden, which is partially shaded by mature bamboo.

As with the brightly painted kitchen, the rest of the interior features a vibrant palette of primary colors, which enhance original details, such as the terra-cotta tile and bare block and brick, without detracting from the structure’s strong geometric lines.

"It’s a brilliant family home," notes Jason. "You enter into the courtyard, which is bordered by the open-plan living space and one of the three bedrooms, through a really normal looking gate with an orange door in it. Even people who have lived in the immediate area for 30 years haven’t realized there is a house here. It’s just in its own little world, and there’s a real calmness to it." 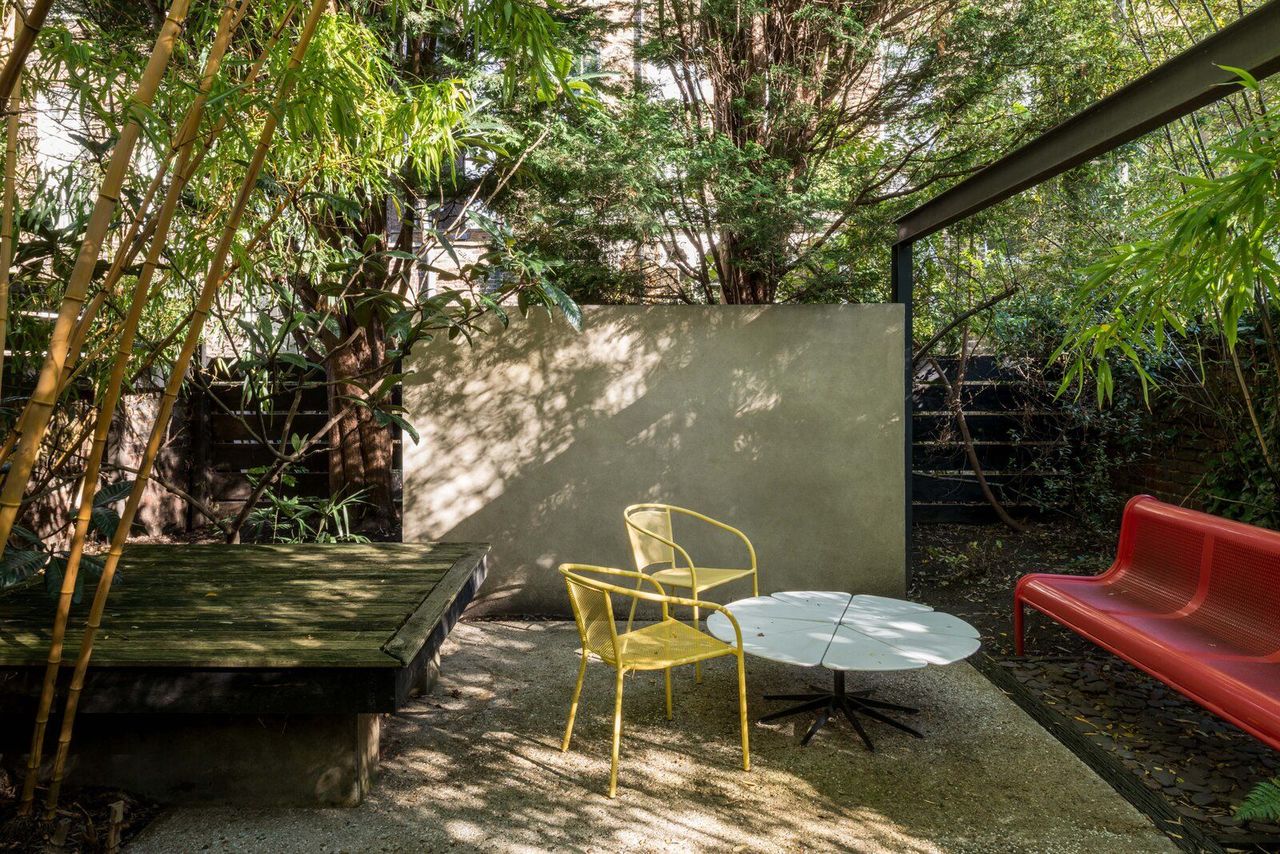 The original steel frame and concrete patio in the garden create an eclectic, private gathering space that blurs the lines between inside and out-a hallmark of midcentury design.

After living in the property for nearly 15 years, Jason, Jenny, and their son Stanley, are relocating to the area where Jenny is originally from-and are thus seeking a new buyer for the home. "I will miss everything about this house. I want someone to have the same experience we have had and love it as much as we have," says Jason. "It is going to be the biggest wrench of our lives selling it, but we’re onto a new chapter and we’re starting to get excited about it now." Keep scrolling to see more of the property, currently listed for £1,095,000. 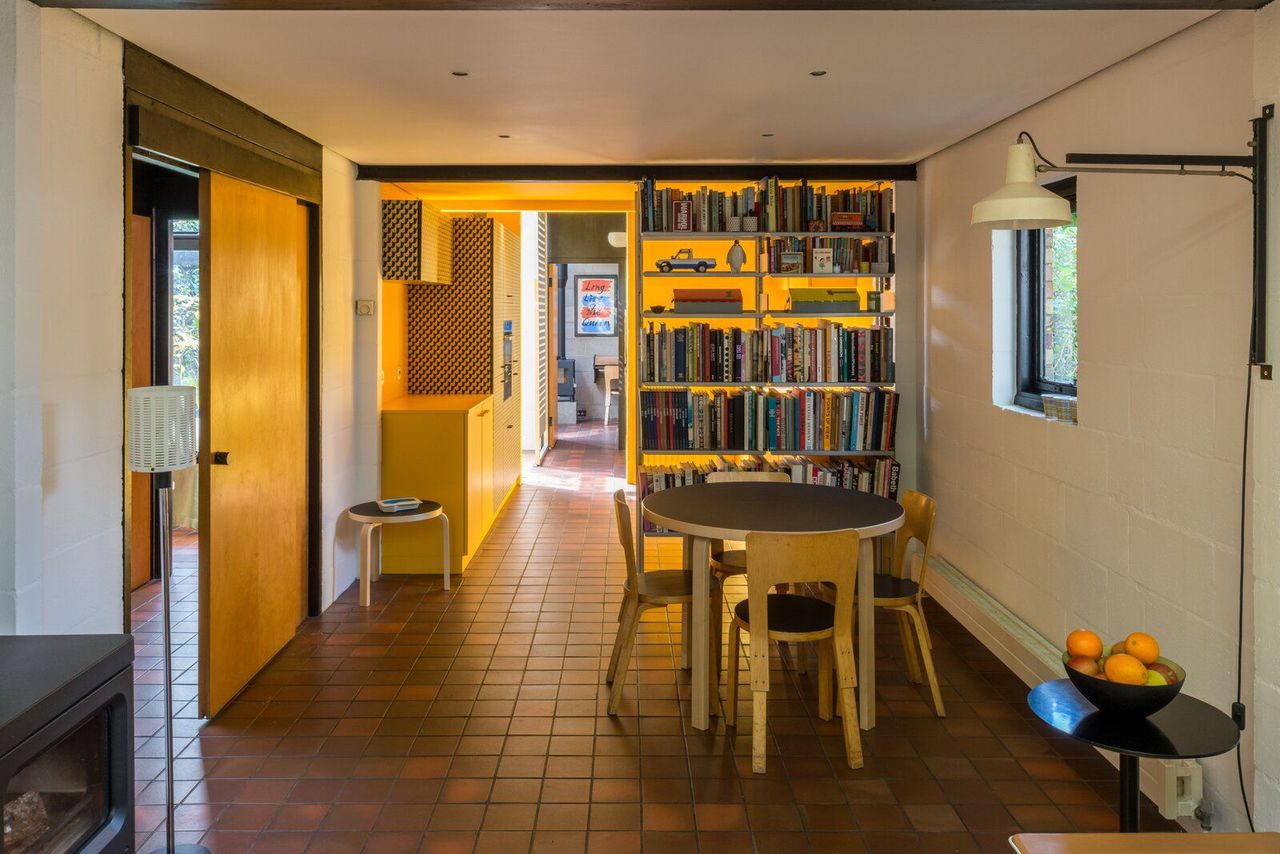 A cozy dining area awaits on the other side of the floor-to-ceiling bookshelves. 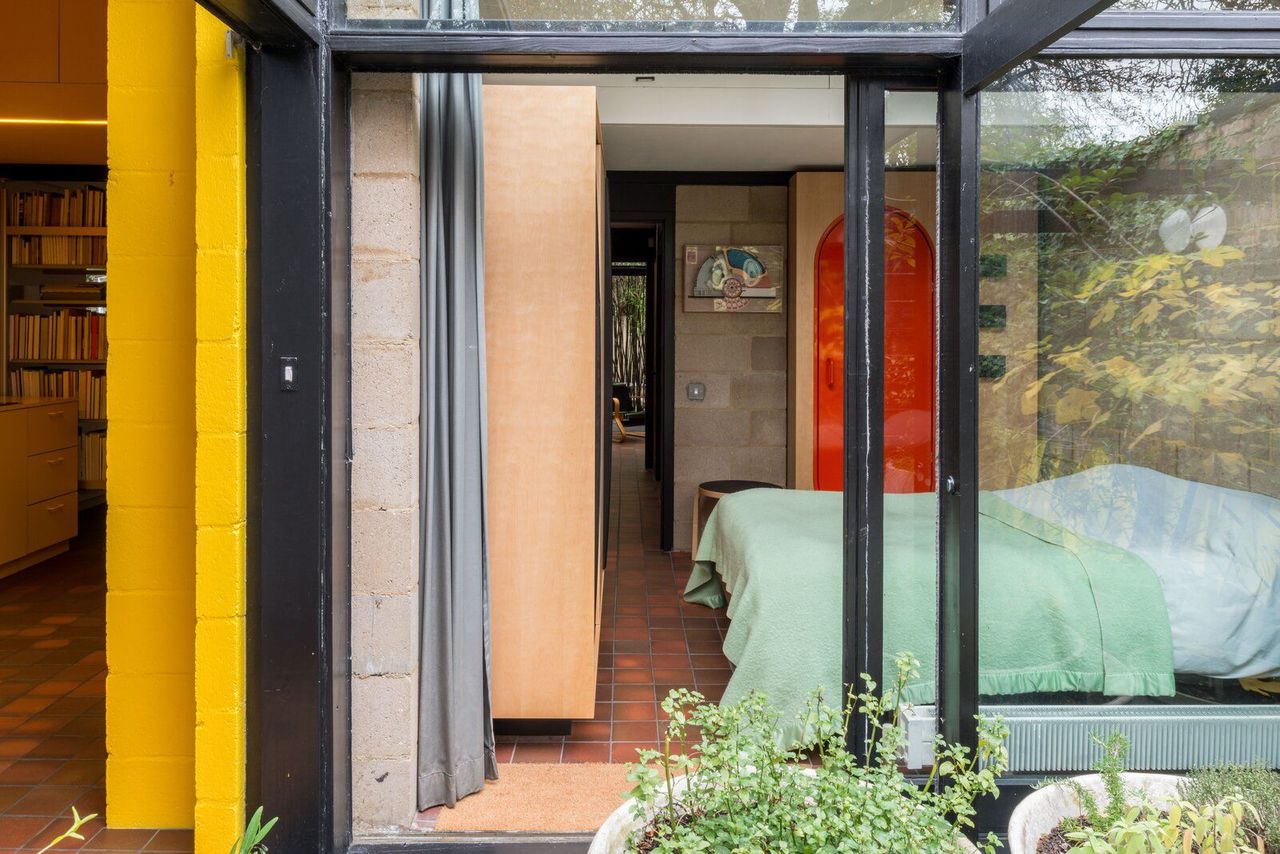 The home offers three bedrooms, one of which is located steps from the kitchen and has direct access to the entrance courtyard. A view from the bedroom looking out to the courtyard. 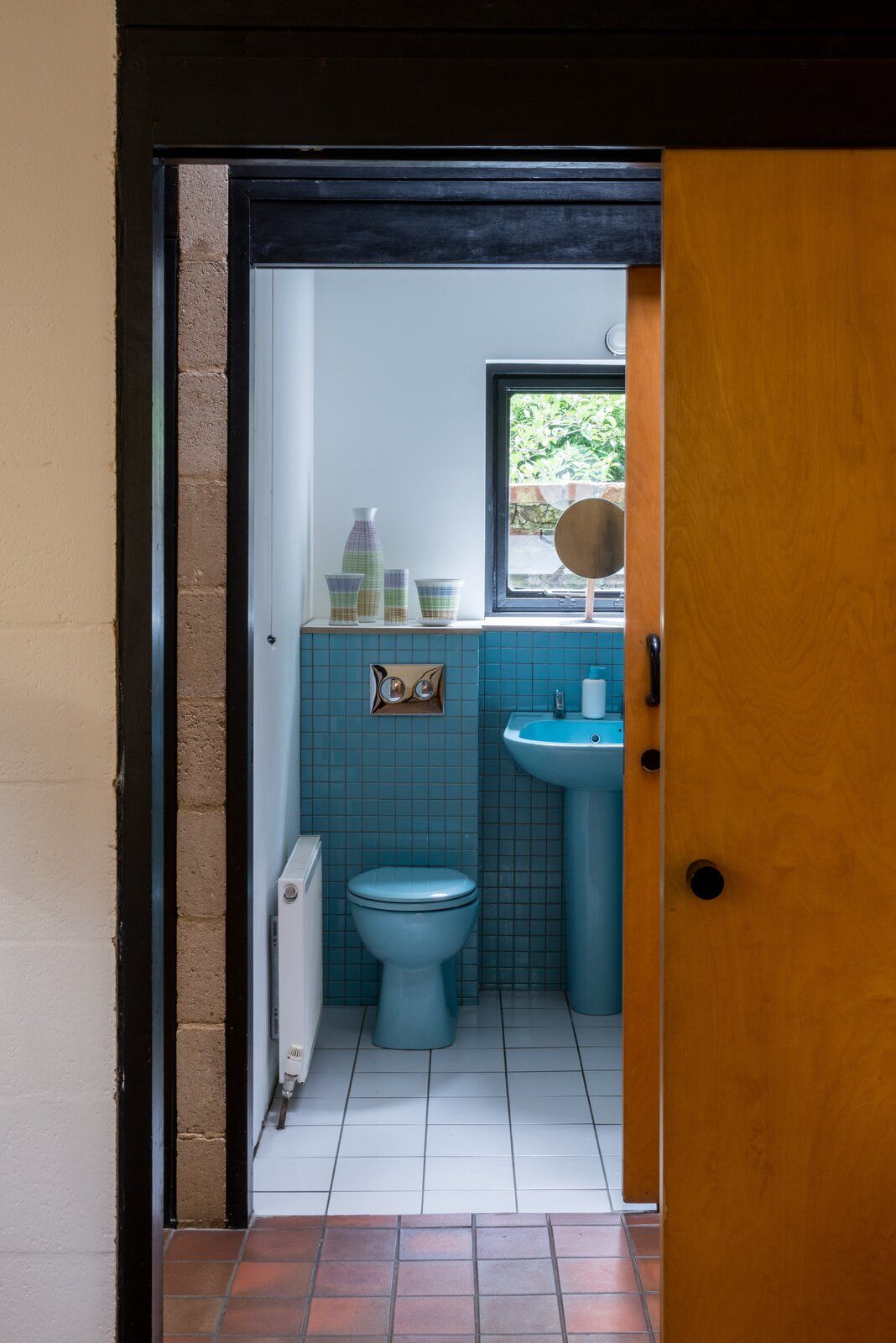 The bathroom sports a cheerful shade of blue that pops against the white walls and floor tiles. A peek at another one of the bedrooms, which features ample built-in storage and overlooks the gardens. The bright accent wall adds a playful touch to the neutral material palette.