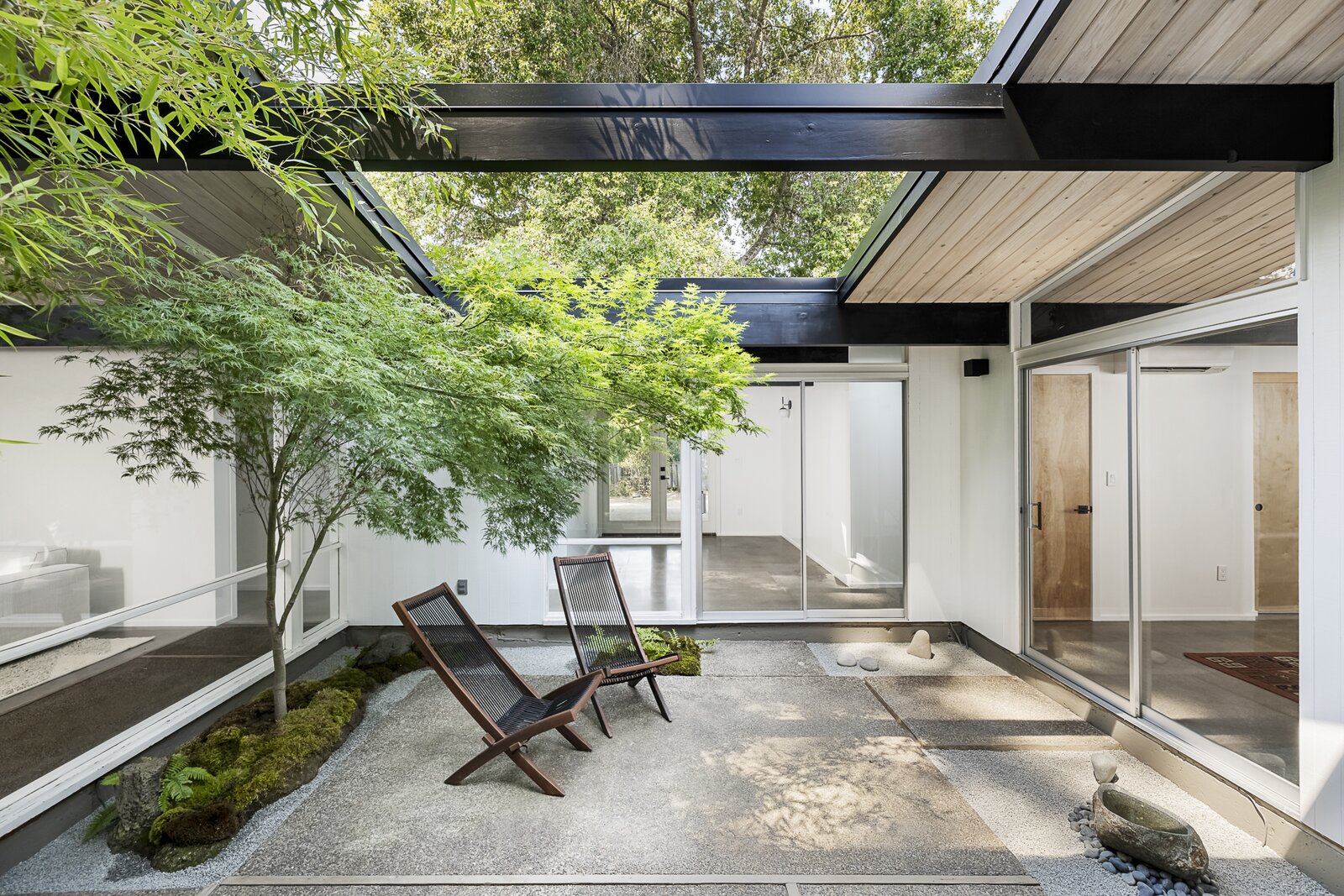 The updated 1968 residence by developer Robert Rummer-known as “Oregon’s answer to Eichler”-features an open-air atrium inspired by indoor/outdoor Japanese architecture.

In 2019, Fay Ou-Yang and Martin Sanmiguel bought a classic Rummer in Beaverton, Oregon, so-called because the 1960s home was built by famed local builder Robert Rummer. Described as "Oregon’s answer to Eichler," Rummer was heavily influenced by the esteemed California developer and built about 750 post-and-beam houses in the Portland area between 1959 and the mid-1970s. In recent years, Rummers have become hot commodities on the local real estate market. This home in Beaverton, Oregon was built by Robert Rummer in 1968. After purchasing it in 2019, Fay Ou-Yang and Martin Sanmiguel gave the house a new PVC roof, gutters, and paint job.

When Fay and Martin bought this 1968 residence, the midcentury structure had seen some striking modifications. For instance, the atrium just inside the entrance-which is a hallmark of Rummer’s designs-had been enclosed into a glazed vestibule of sorts, complete with a roof and wooden floors. "Our first undertaking was to restore the atrium," says Fay, who liked how that space in particular evoked traditional indoor/outdoor Japanese architecture. Having lived in both New York City and Kyoto, Japan, the homeowners wanted to combine an industrial aesthetic with a Japanese influence, while also returning the Rummer back to its roots. 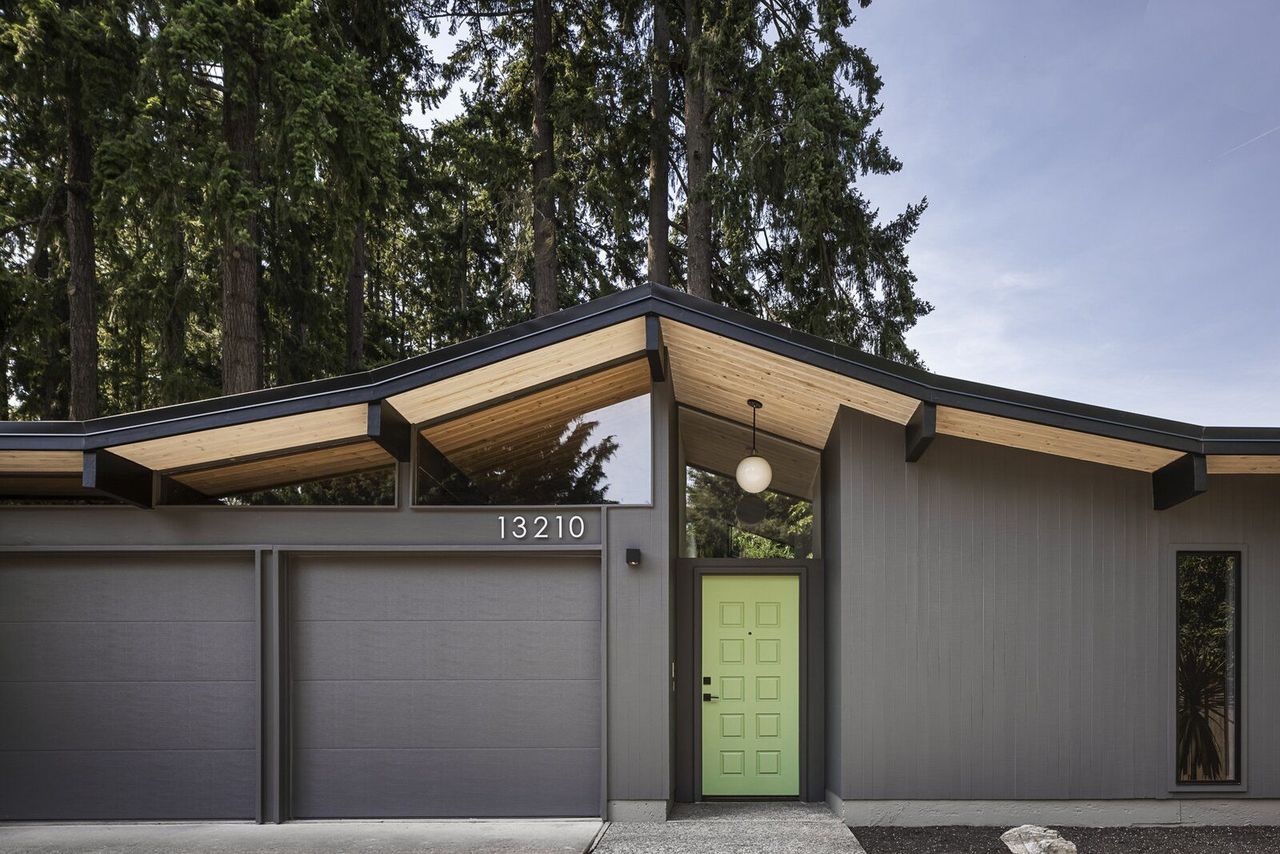 The current homeowners initiated the renovation, despite not knowing much about Rummers or remodeling. "We were novices," says Fay, who researched the architectural features of Rummers to be able to restore key structural components, like the roofline.

Once the atrium was done, the couple started stripping back layers of flooring to get to the original concrete. "Of course, if we were going to do that, we had to restore the roofline, just to get that value and the beauty back," says Fay. The project soon snowballed into a full-scale remodel of the home. "We joke around with our friends about how it was a naive mistake to start the whole thing," says Fay. But the more the homeowners intervened, the more they noticed when certain elements didn’t coalesce. "It’s like, okay, now this doesn’t look right. One bathroom is renovated, but the other isn’t," says Fay. "So, it was just one thing after another, after another." 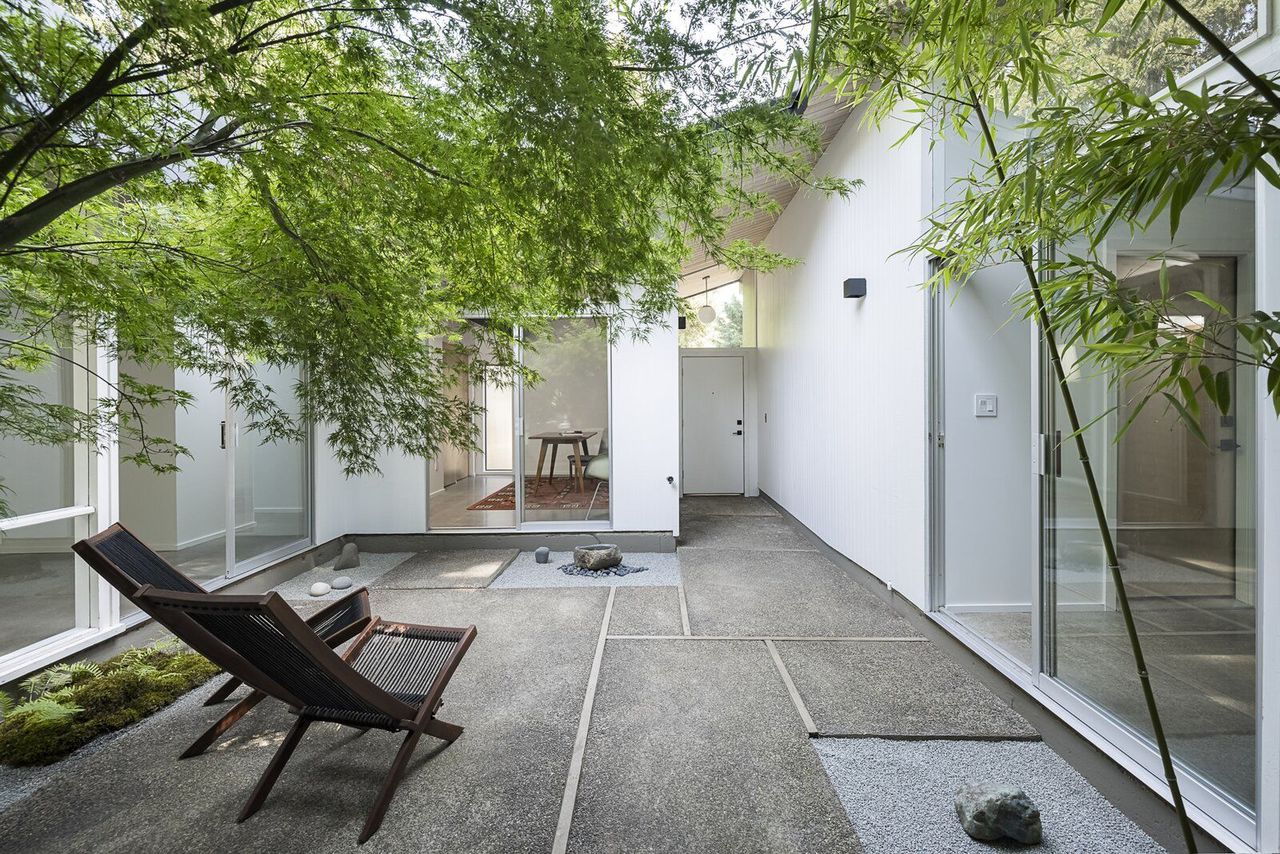 The open-air atrium at the entry is now the centerpiece of the home. The interior courtyard is surrounded on four sides by glass doors that offer sight lines and access to different living spaces. The owners planted a Japanese moss garden accented by crushed granite, as well as a lace leaf maple, which turns red during fall. Mature black bamboo grows through the open ceiling from its freestanding pot. 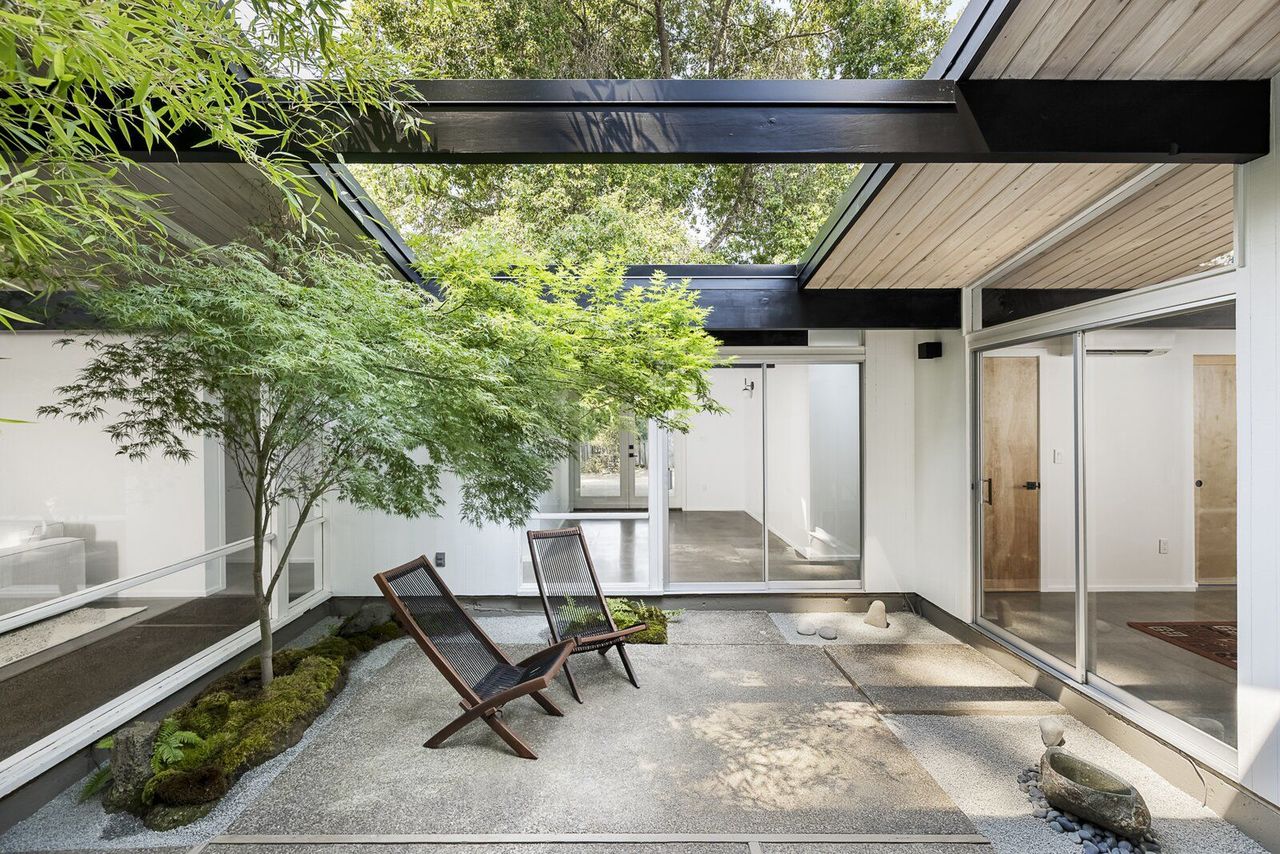 The atrium is a lovely place to sit outside while still being somewhat protected. "We wanted to build this Japanese garden similar to what we remembered from Kyoto," says Fay, who refers to the area as "our little oasis."

In the two-year overhaul of the residence, the current owners brought back the original structure’s bones, then instilled an understated palette that lets the classic Rummer architecture shine through. At the front facade, the duo removed a bulky storage space that had been created for an HVAC system in order to rescue the original roofline. Unnecessary walls in the living spaces came down to open up the floor plan and reinstate sight lines to the atrium throughout the home. The original tongue-and-groove ceilings were all refinished, and the interior courtyard now opens to the sky so that a lace leaf maple and black bamboo can grow. The couple introduced new skylights and refinished the wooden ceilings to a paler hue. The original beams were covered with Sherwin-Williams Resilience exterior paint in Tricorn Black. 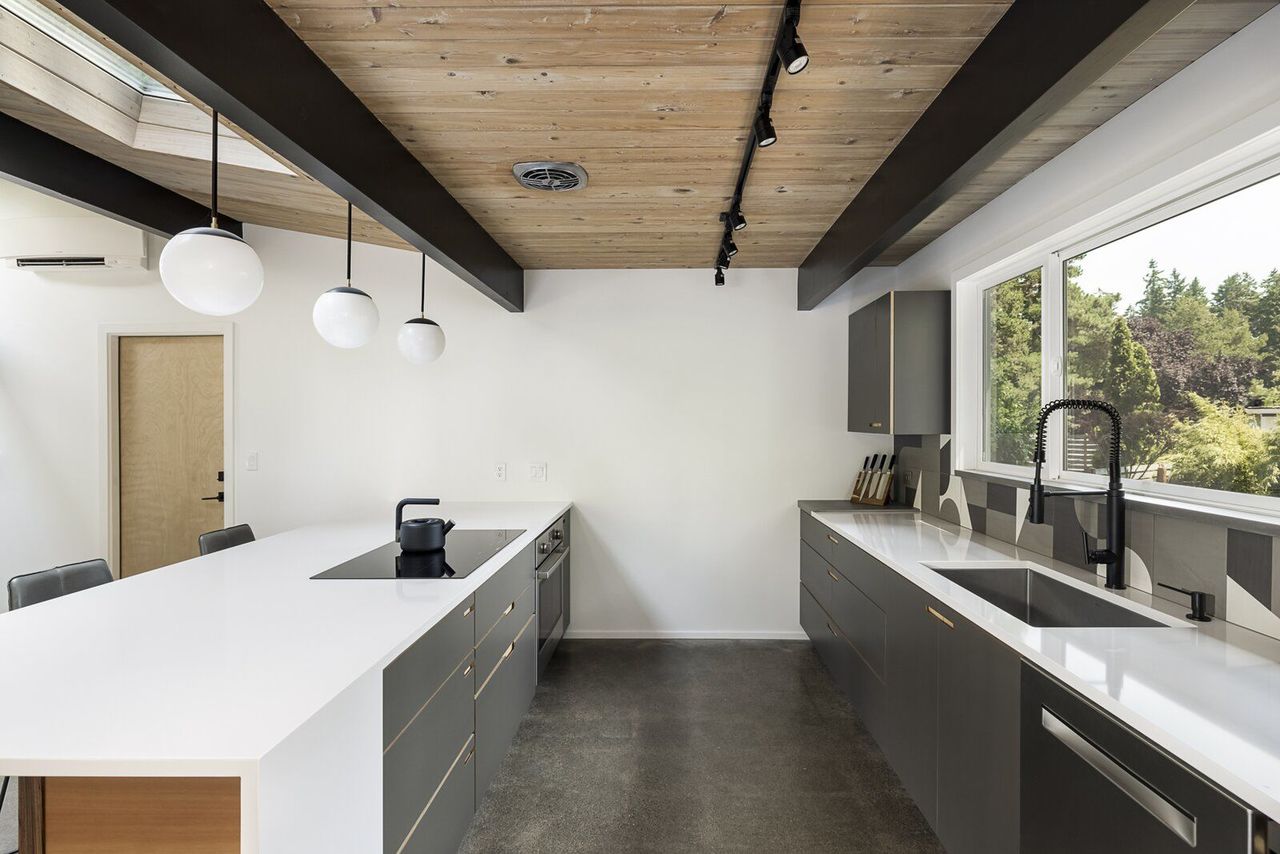 The updated kitchen features custom Russian birch plywood cabinets and quartz countertops, with concrete detailing at one corner and at the windowsill. The current owners kept the original ceiling-mounted stove hood extractor as a nod to the home’s past. The open kitchen-which looks out onto the interior courtyard, as well as the dining and living areas-has all-new Bosch appliances, including the induction cooktop.

The 2,062-square-foot residence incorporates three bedrooms and two bathrooms into its spacious, connected floor plan. Many of the cherished Rummer details-like the original floor-to-ceiling windows at the back of the house-comingle elegantly with the home’s updated features, such as the custom kitchen cabinetry, patterned bathroom tile, and new skylights peppered throughout. An existing support column was covered in Italian porcelain tile from Pratt & Larson. The dining room retains its original floor-to-ceiling glass. A small indoor garden in the corner was made by cutting out a section of the concrete floor. The sea urchin chandelier is by Dutton Brown.

As the renovation came to an end, the current owners enjoyed watching the new plantings flourish in the open-air atrium. "Sometimes we’d sit out with our scotch and enjoy how you can see all the stars on a clear night," says Fay. "It’s the house’s soul." Scroll ahead to see more of the renovated Rummer in Beaverton, Oregon, now listed for $925,000. 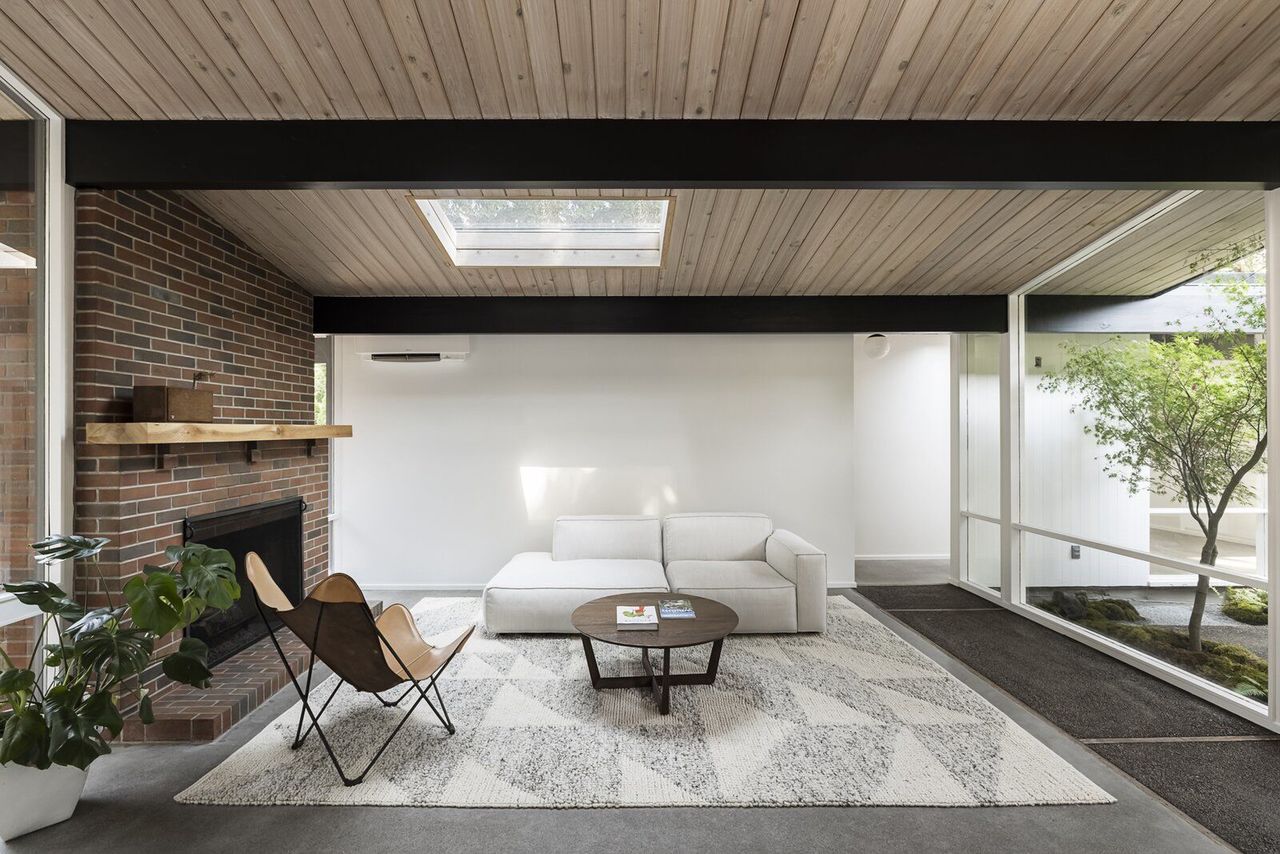 In the living room, a new skylight brings in more light, and the original fireplace has a new cedar mantle. 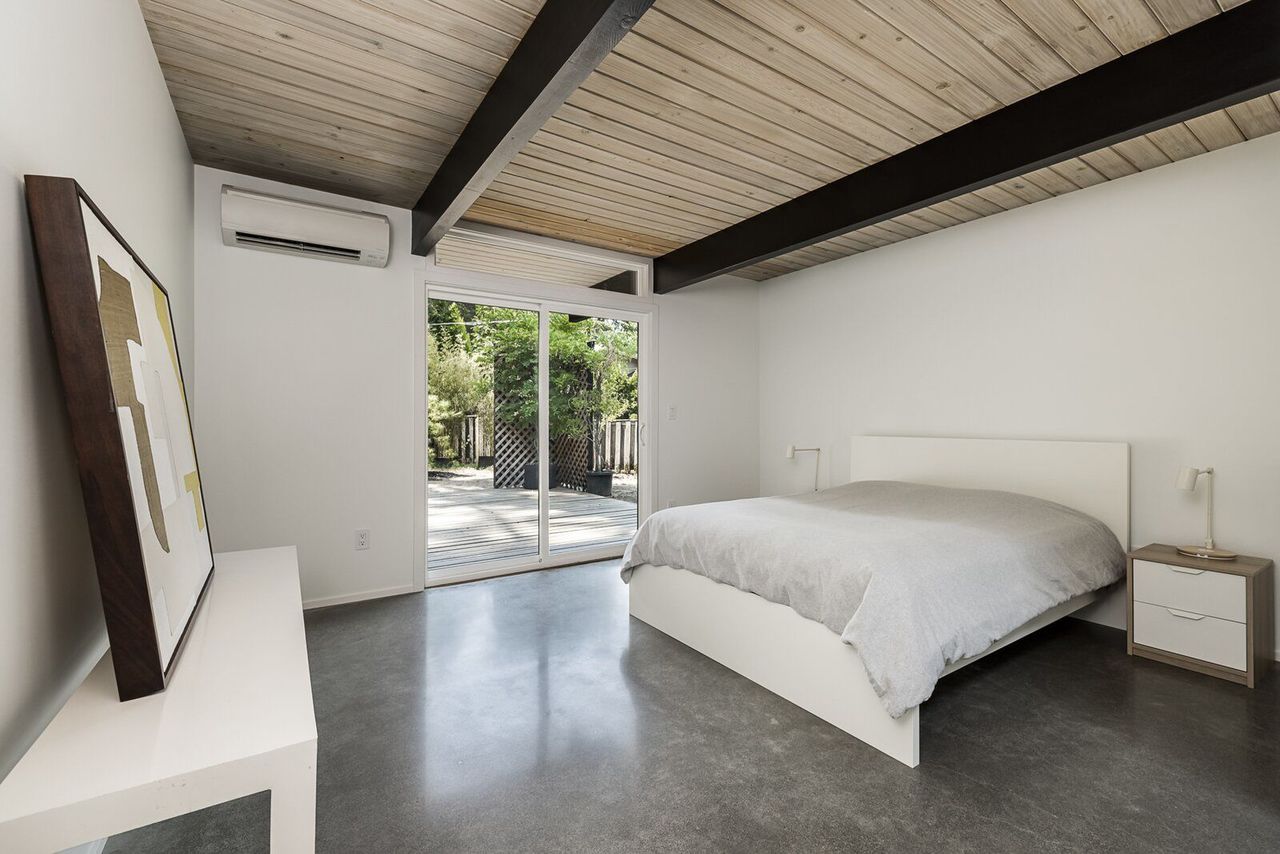 The main bedroom features a sliding glass door that opens to the backyard. The original concrete flooring throughout was restored and polished. 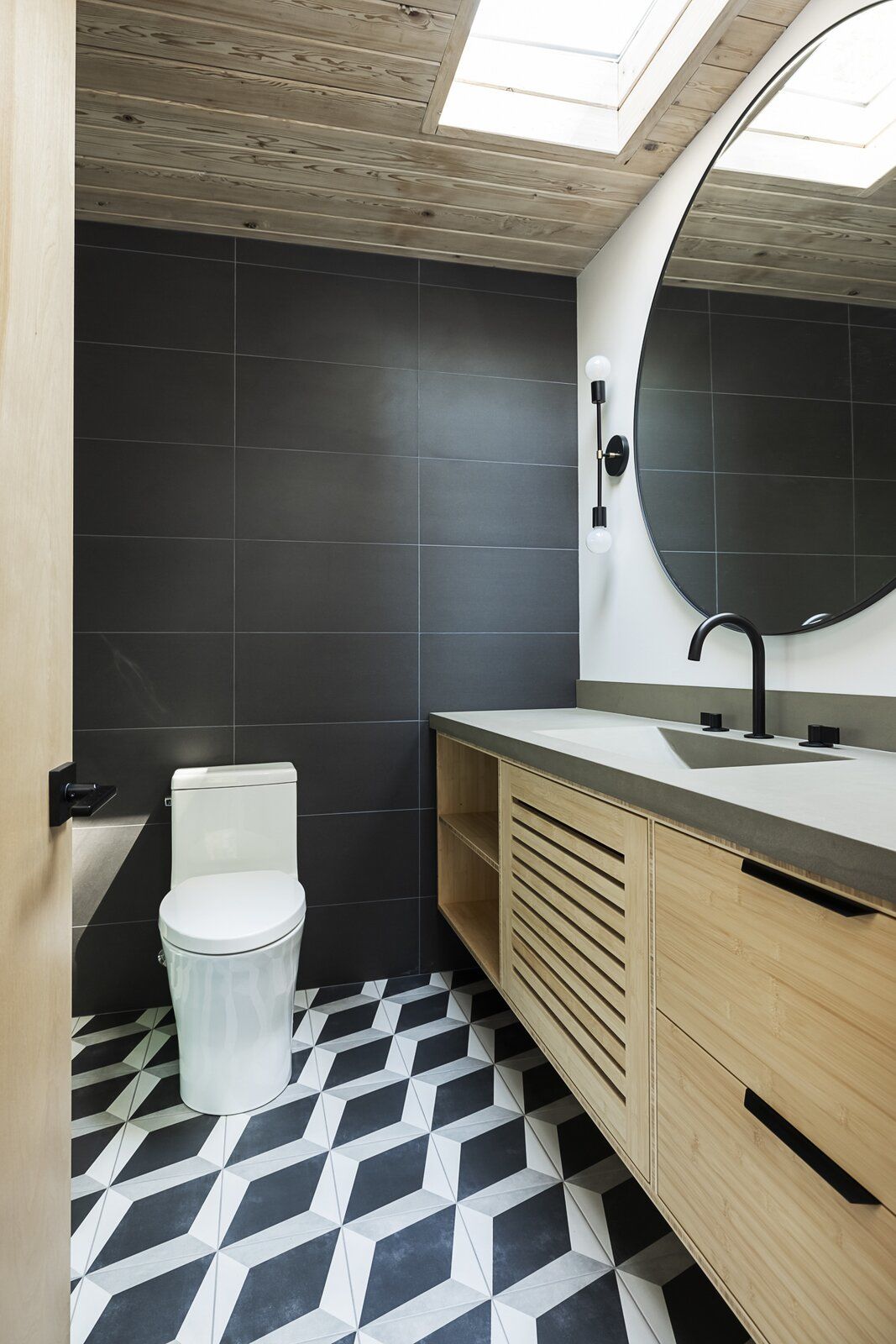 The en suite bathroom has a custom bamboo vanity topped with custom concrete counters. A 48-inch mirror with a matte-black rim syncs with the Kohler fixtures. 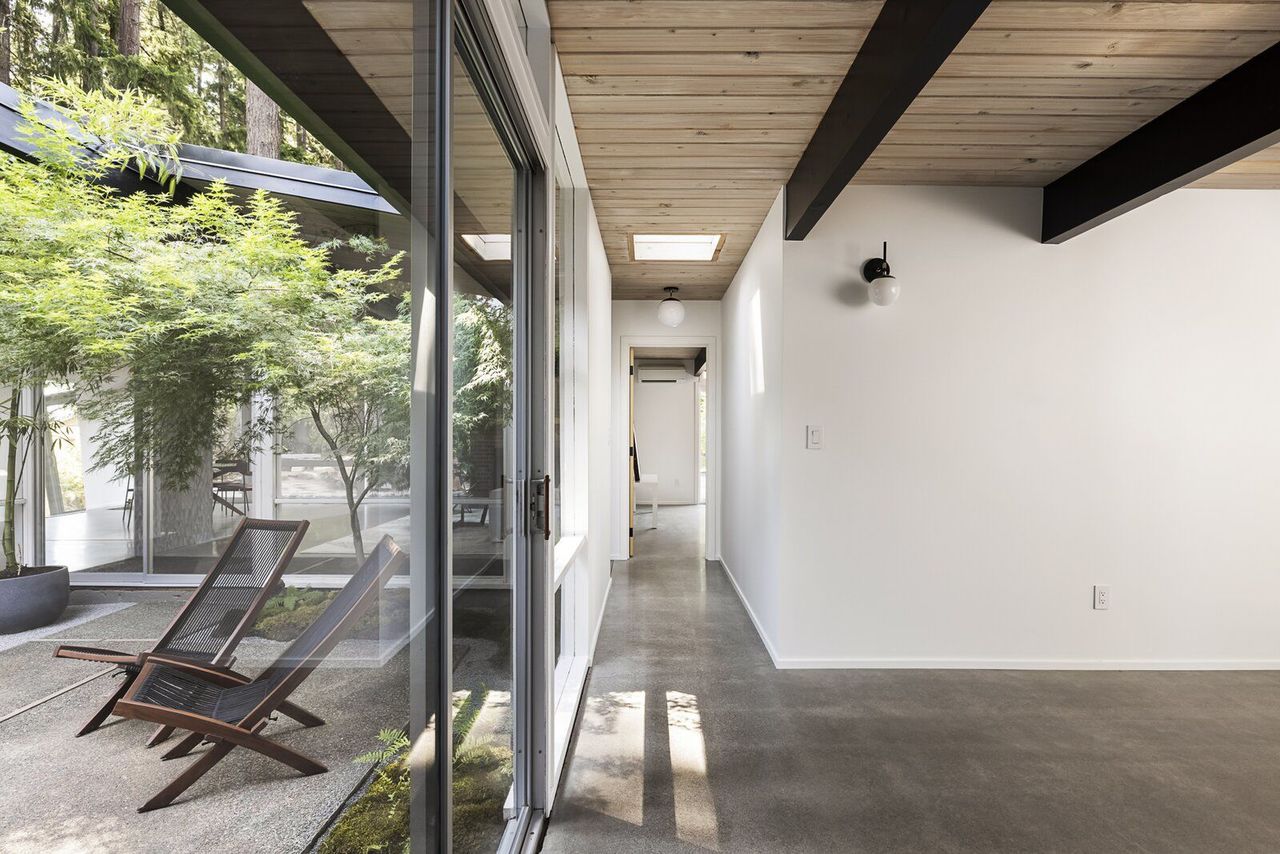 A hallway wraps the open-air atrium, with a sitting room to the right. 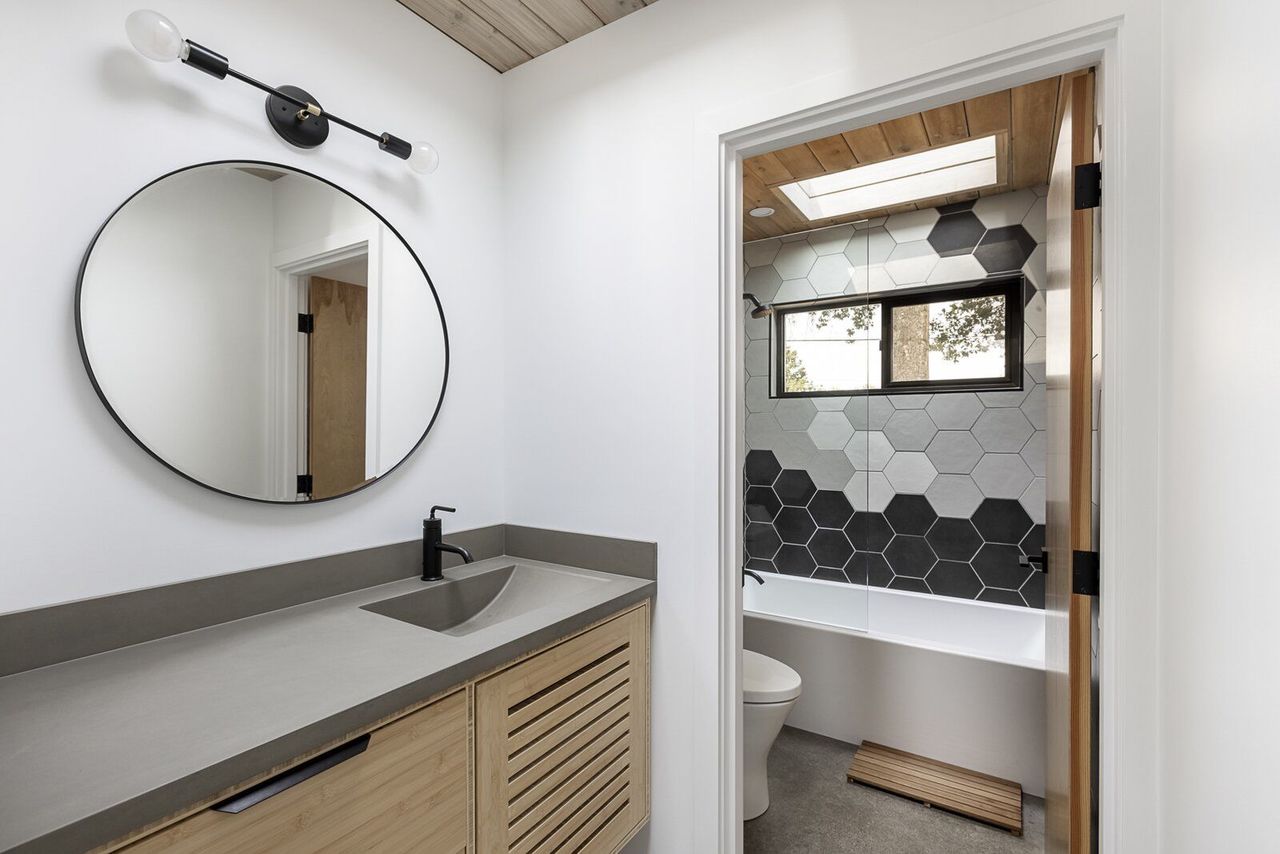 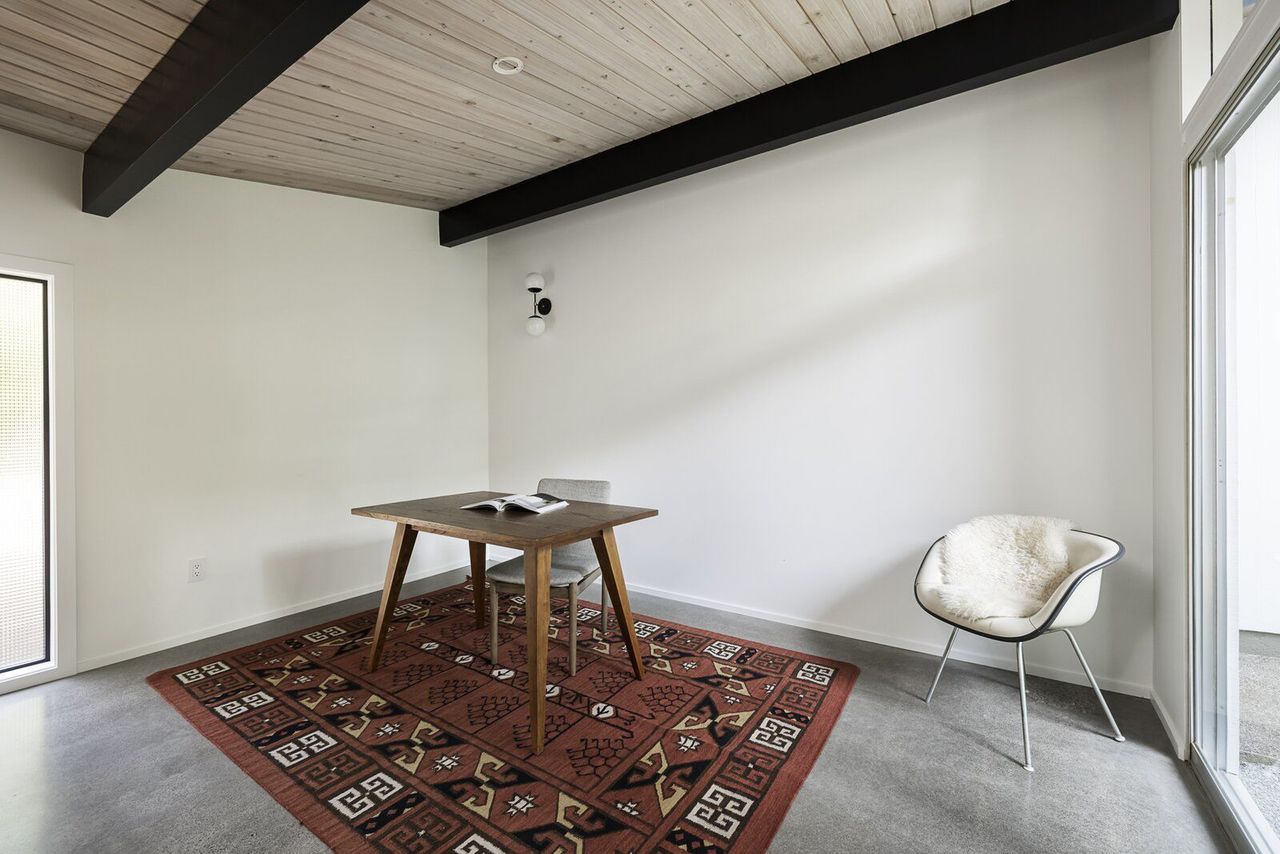 The third bedroom features glazed doors that open directly to the atrium, making it an excellent spot for a home office as well.