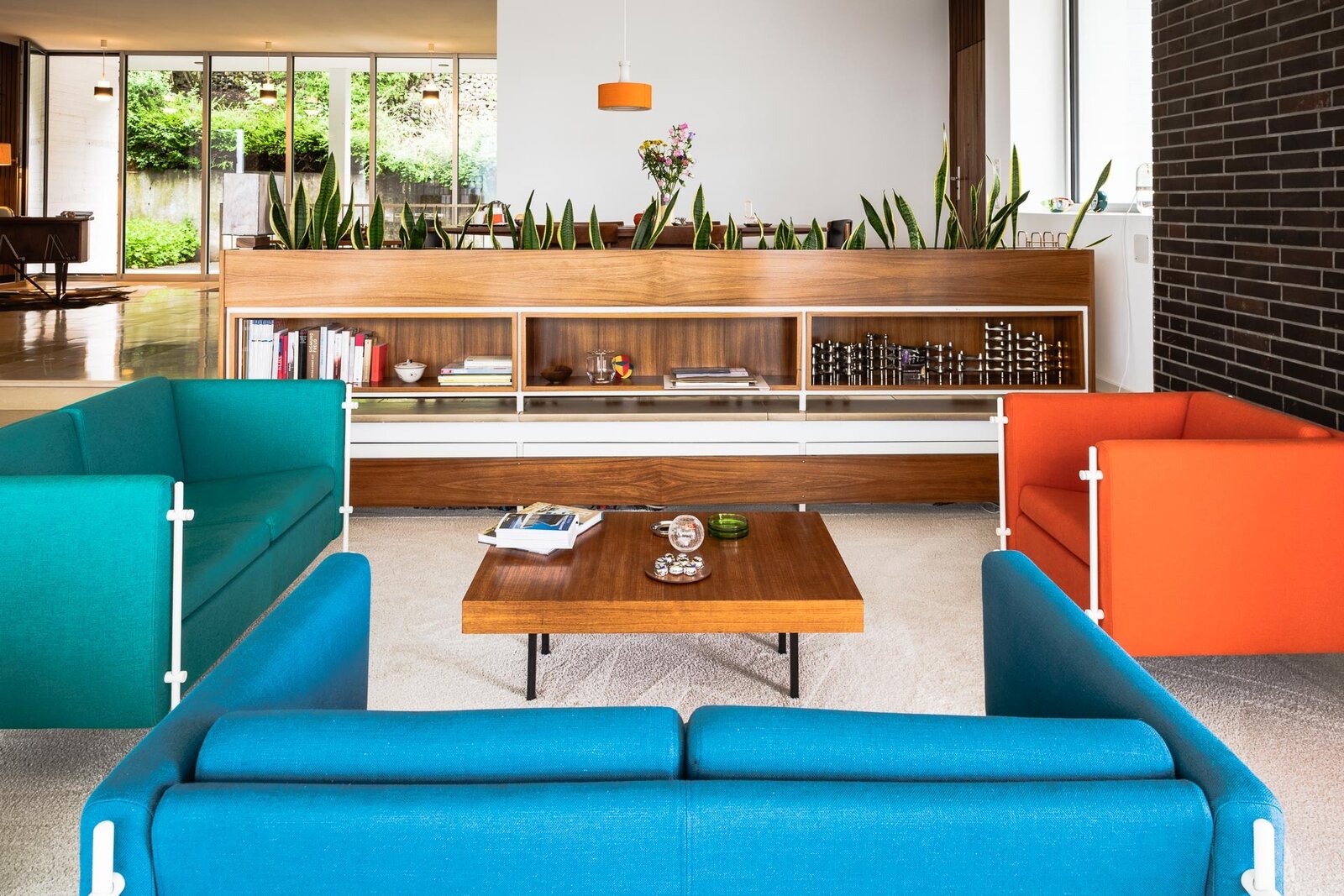 Designed by architect Jan Lippert, the midcentury bungalow in Germany is a cultural monument.

Recently renovated after changing hands in 2017-the first time since its construction-this two-level Bauhaus bungalow is located in the picturesque community of Rossdorf, Germany, with unobstructed views of the Odenwald mountain range.

The home was built between 1964 and ’65 by midcentury architect Jan Lippert, who studied with Bauhaus co-founder Mies van der Rohe at the Illinois Institute of Technology (IIT) in Chicago from 1954 to ’56, after which he spent five years working for van der Rohe in his Chicago office. Upon his return to Germany, Lippert founded an architecture firm with his twin brother, Waldemar, who had studied with the famous German architecture professor Egon Eiermann. Composed of simple geometric shapes, a flat roof, and floor-to-ceiling windows, the 2,540-square-foot home is officially listed as a cultural monument. 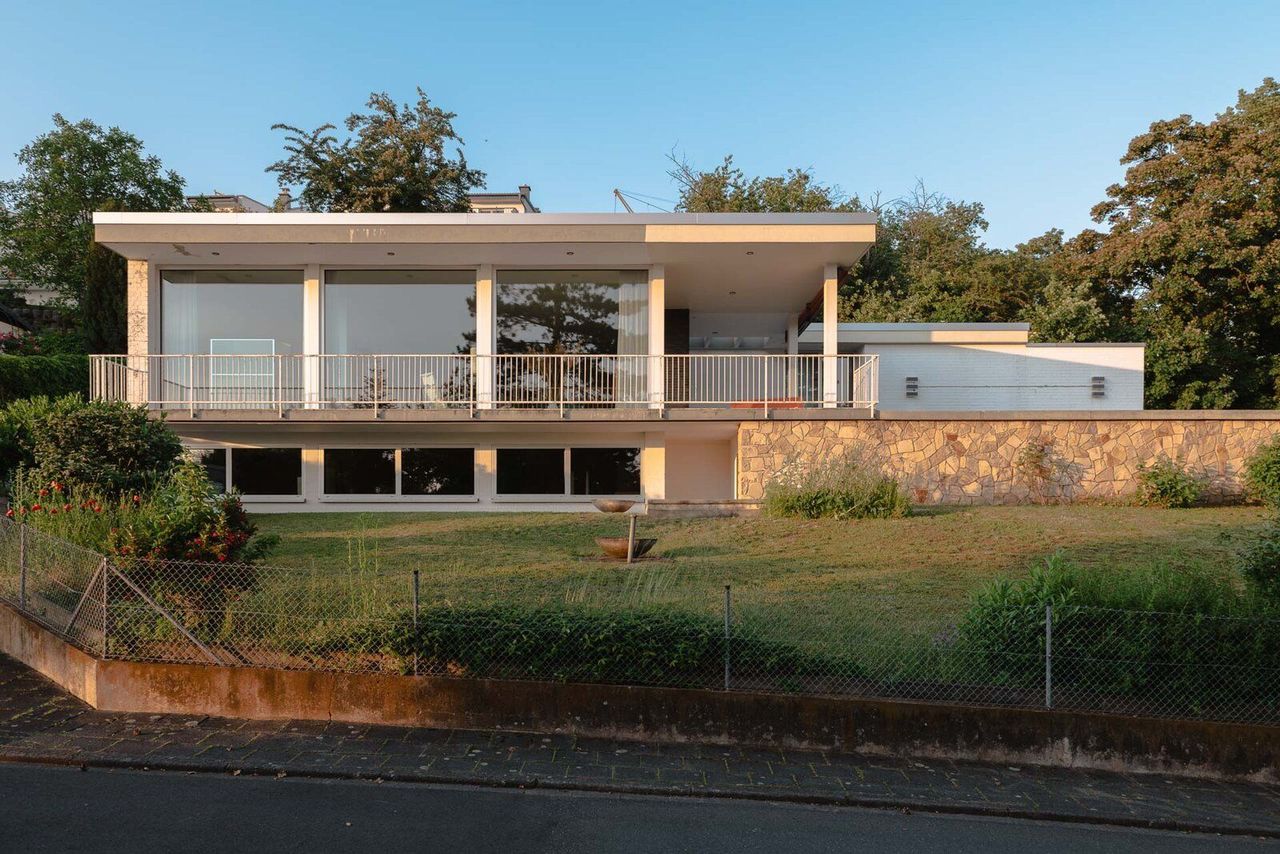 The original owner was a master bricklayer and a civil engineer who employed high-quality building materials, some of which wouldn’t come into standard use until decades later. According to the listing agent, Fabian Heimburger of Heimburger Immobilien, the original homeowner made some "pragmatic" changes to the original plan. "This explains the diverse materiality of the home and its unusually high level of craftsmanship," says Heimburger.

In the renovation, the current homeowner worked with the cultural heritage preservation agency to bring the design closer to the Lippert’s original vision. The work also upgraded the villa’s energy efficiency with the addition of insulation, waterproofing, and a new roof. All the windows and doors were replaced without compromising the home’s historical aesthetic thanks to cutting-edge, triple-glazed aluminum frames. Plus, a new heating system combines radiant floor heating and wall heating, both powered by gas. Adds Heimburger, "Anyone who values great design will appreciate this beautiful home. It feels like living in Palm Springs." 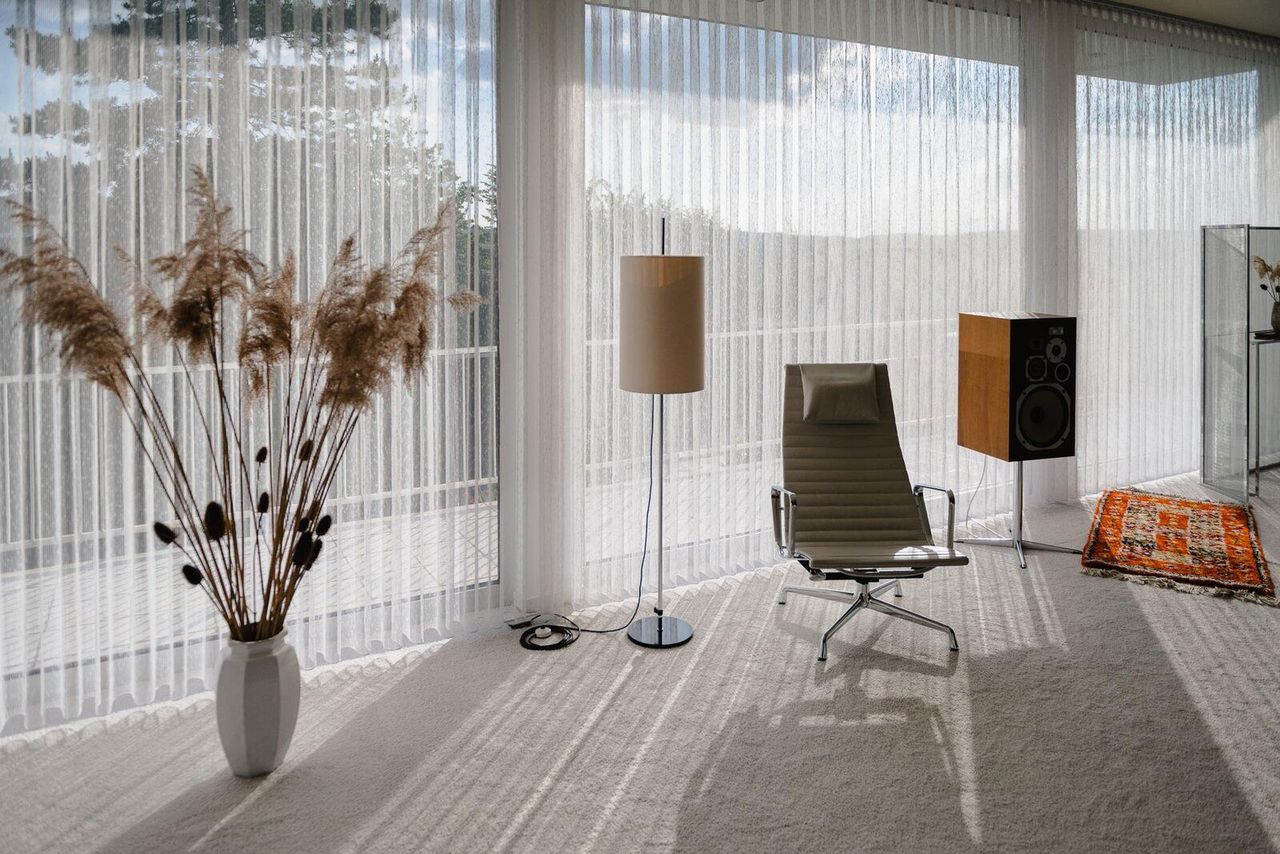 Floor-to-ceiling windows flood the open living room with plenty of natural light, and sliding doors lead to a balcony that wraps the perimeter of the home. 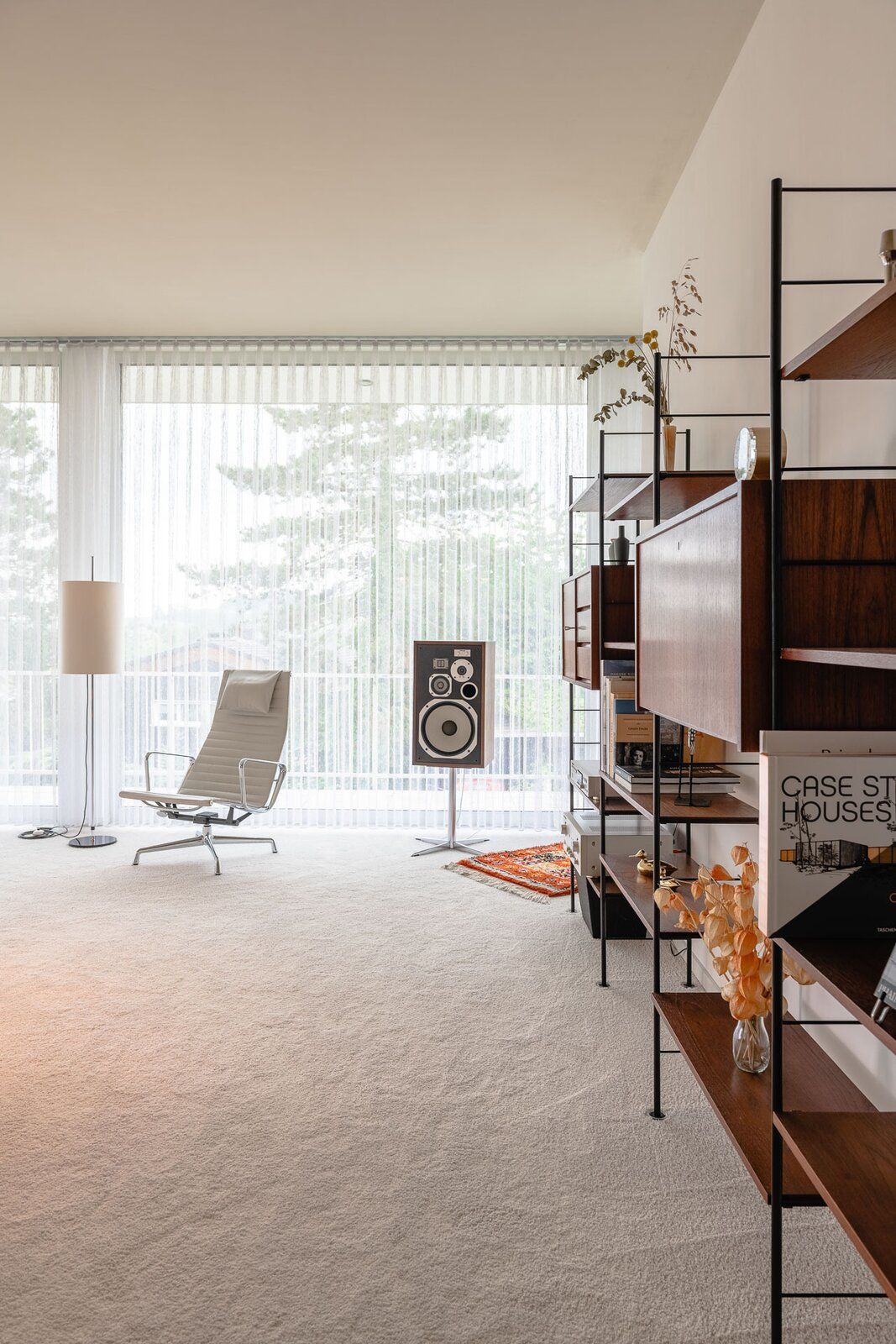 Recently renovated, the bungalow is in exceptionally good condition for a home of its age, due in part to the relationship between the architect and the original homeowner, who was a master bricklayer and civil engineer. 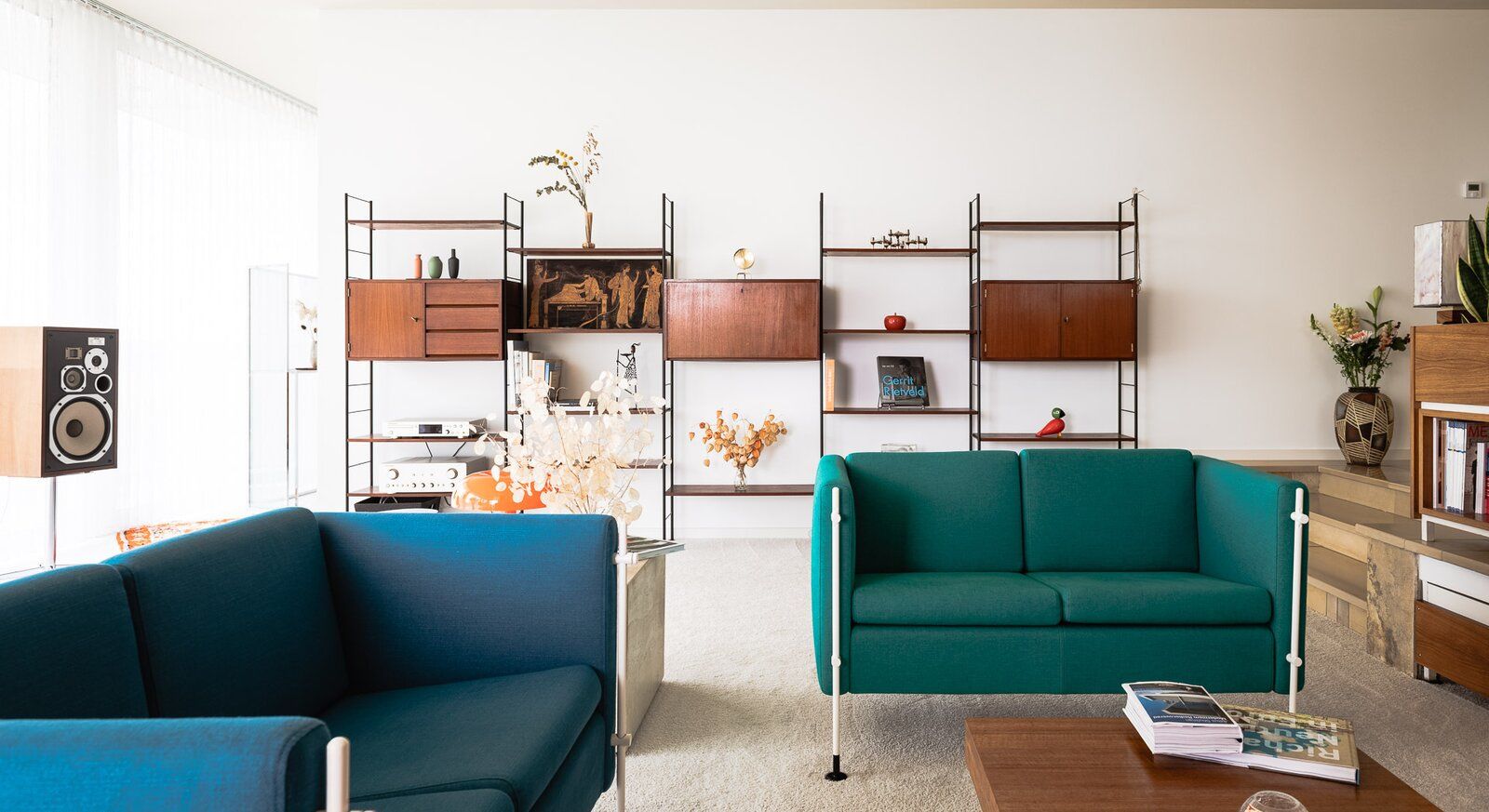 Bright and airy, the classic midcentury open floor plan features a split-level with the living area just a few steps down from the dining room. 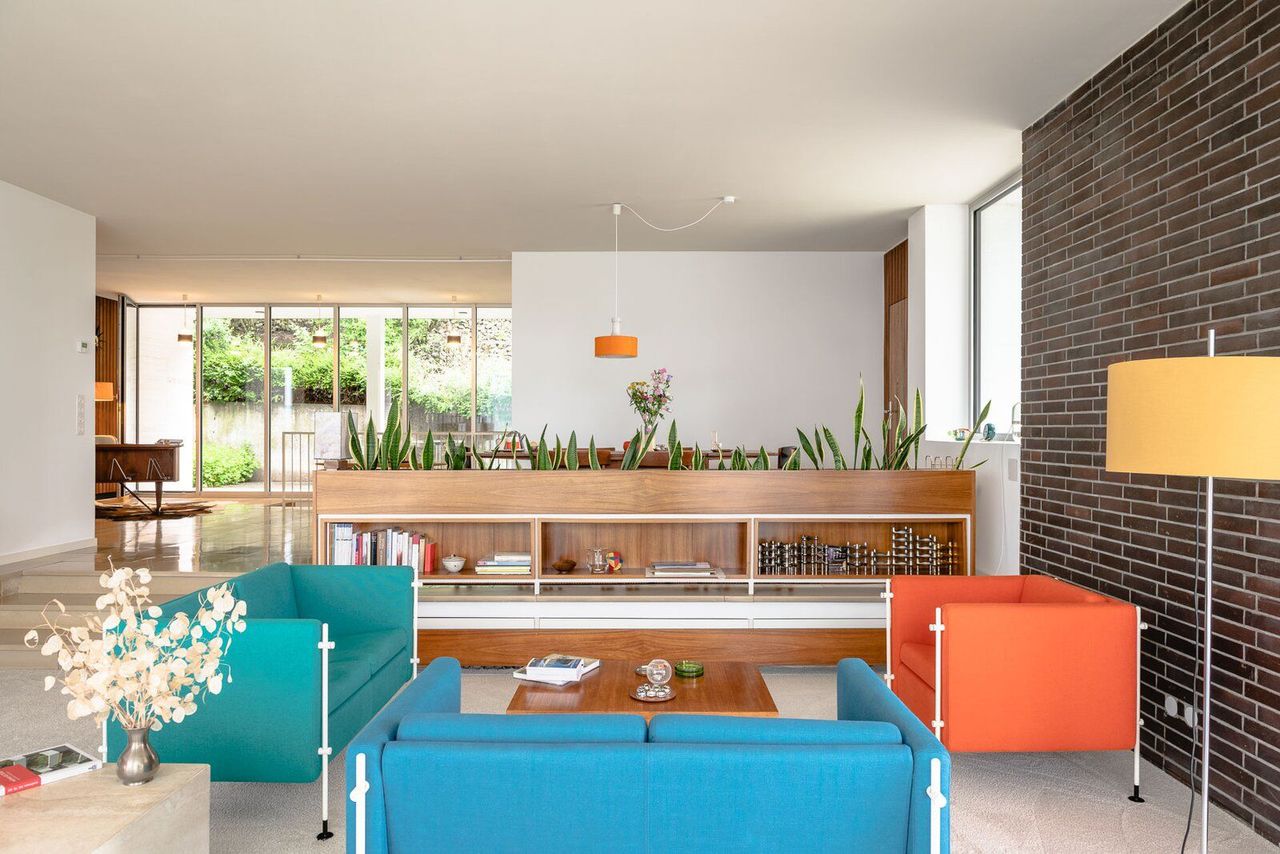 The home maintains its authentic midcentury vibe and a light-filled, indoor/outdoor feel. 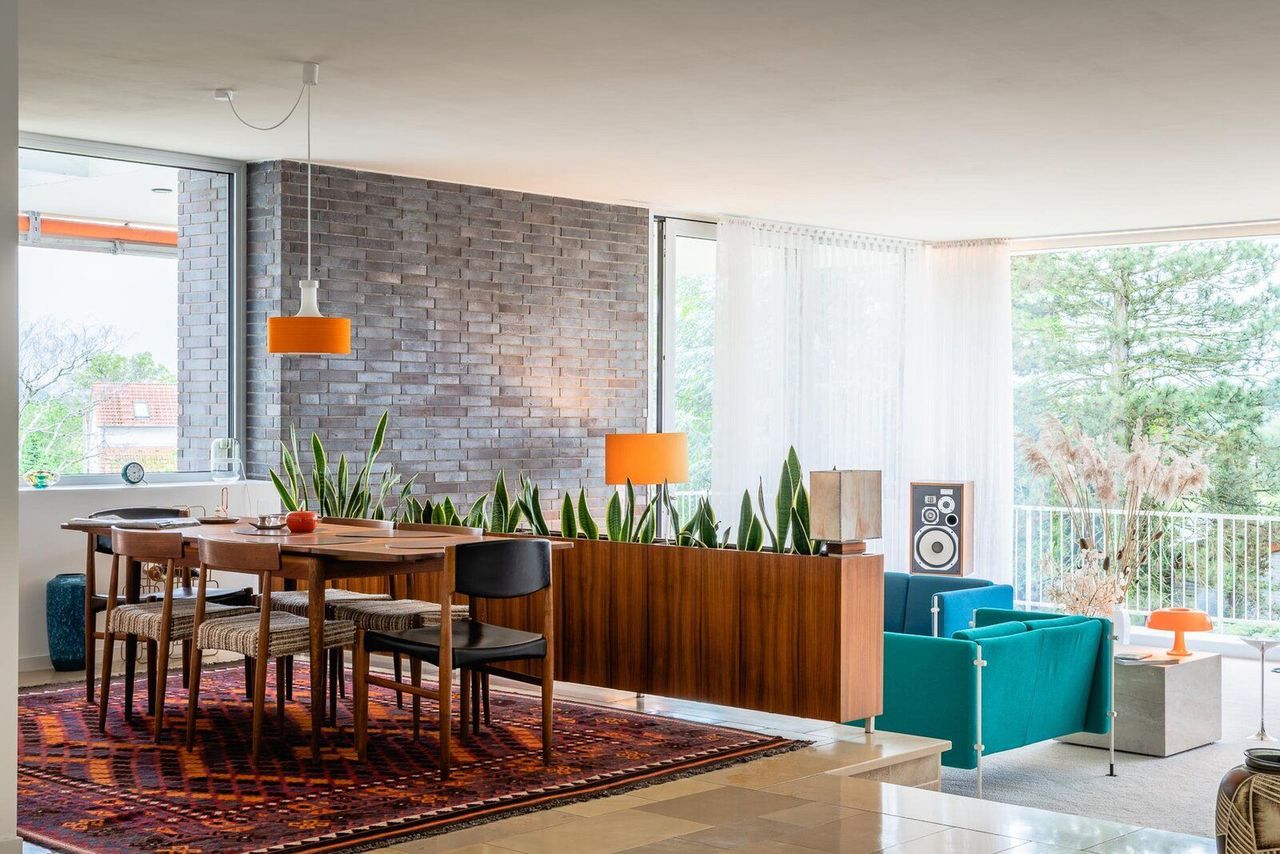 The home showcases the classic design language of the 1960s and consists primarily of glass, steel, concrete, and clinker bricks. 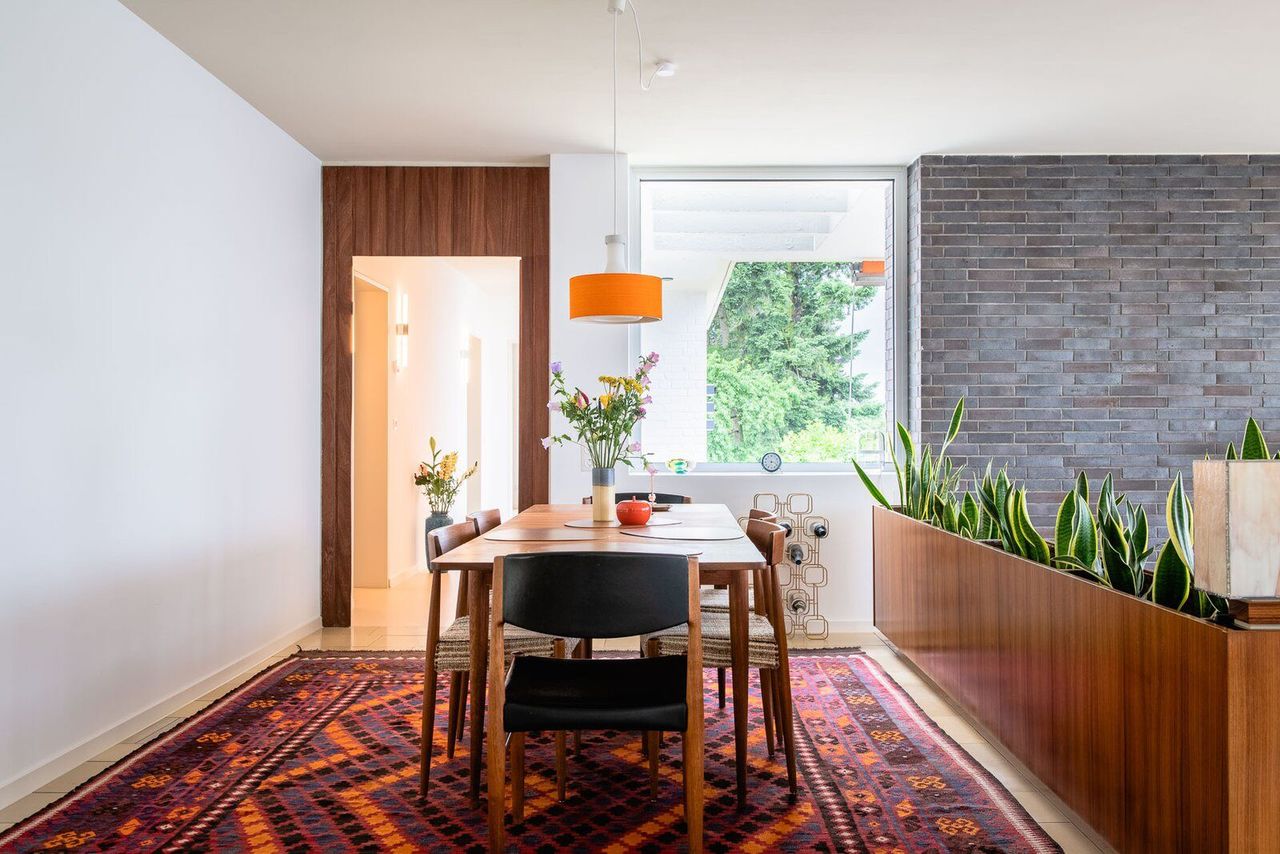 The dining room is just off the kitchen. 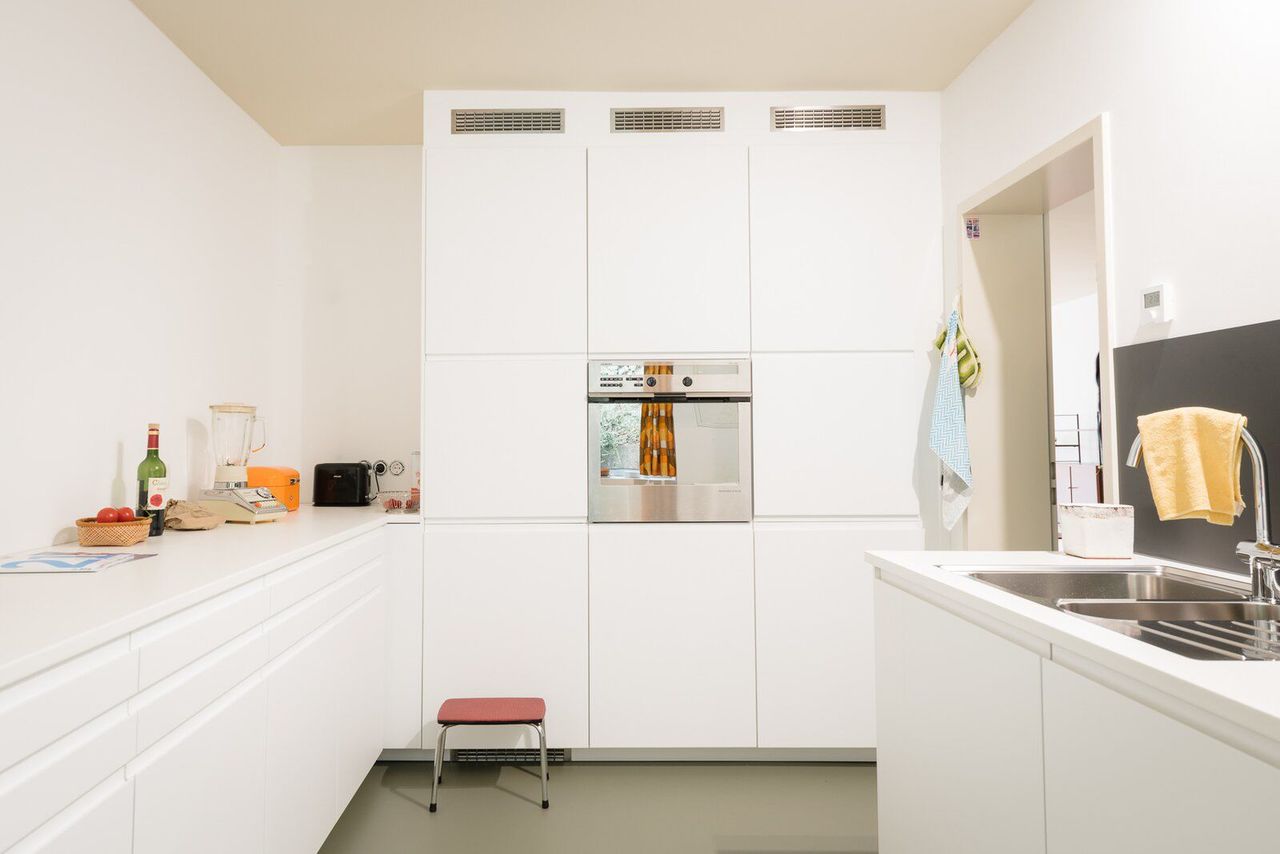 The kitchen is a separate room that has been updated with high-quality appliances to meet modern standards. 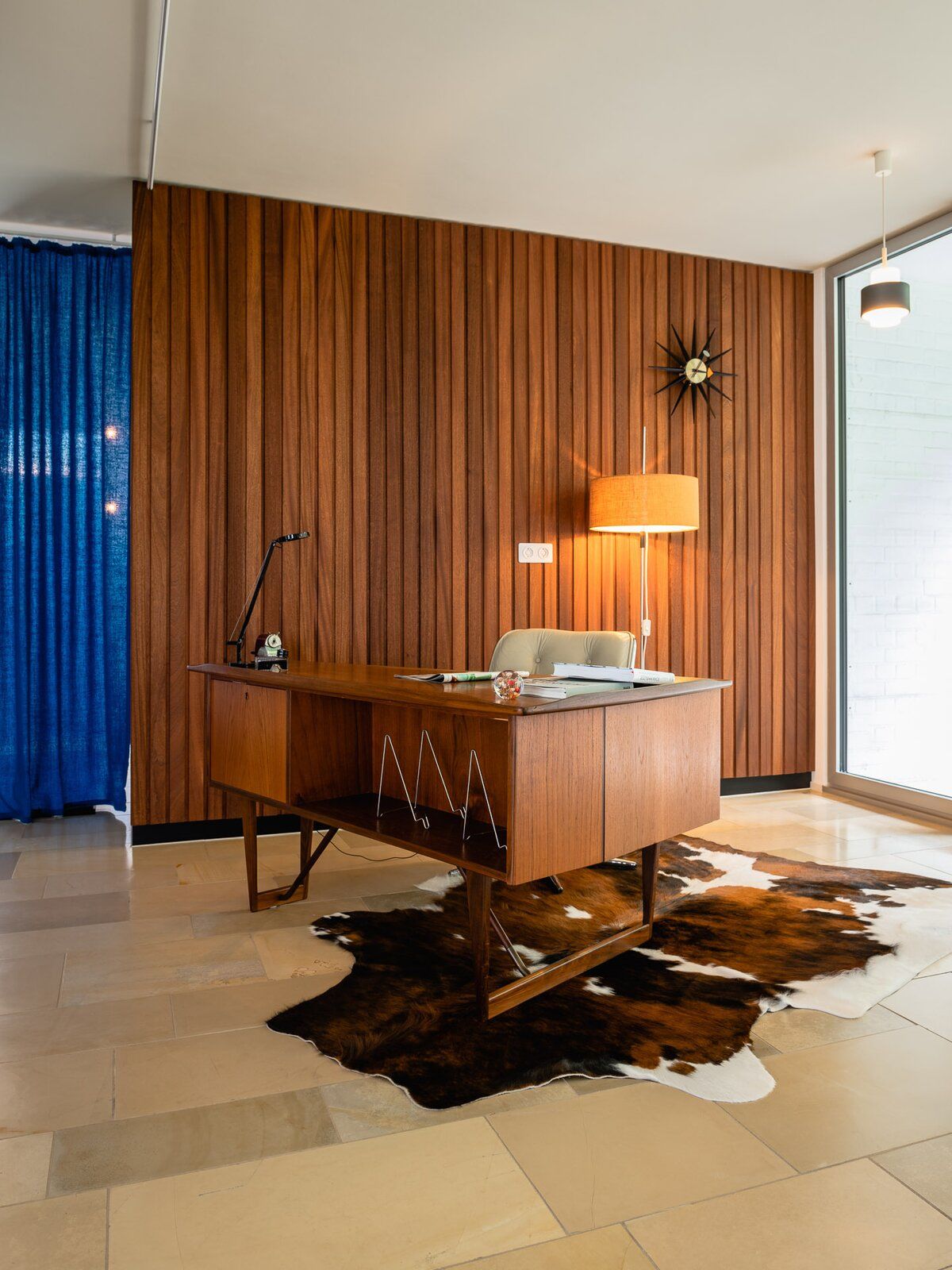 A study or media room could also accommodate a library. 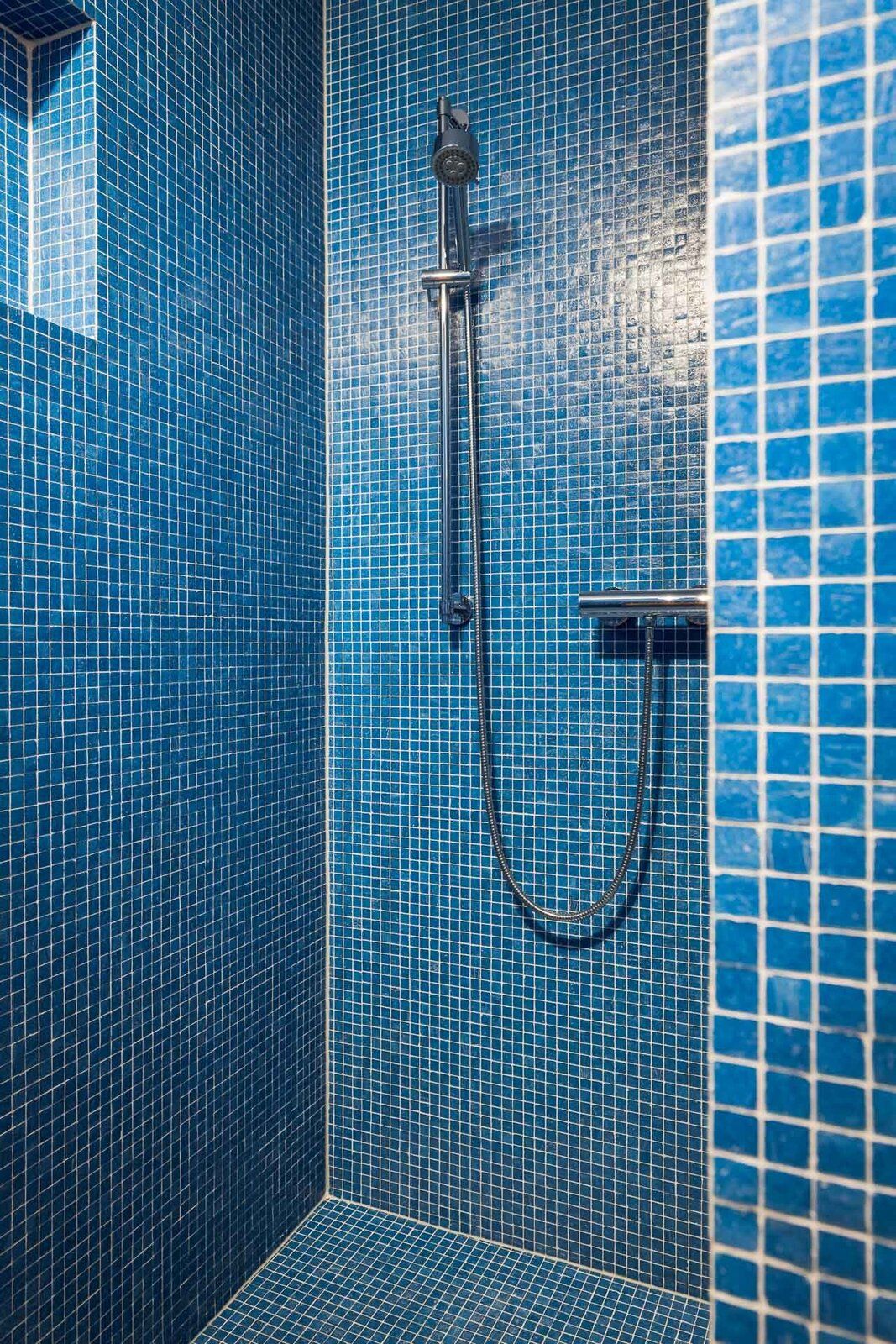 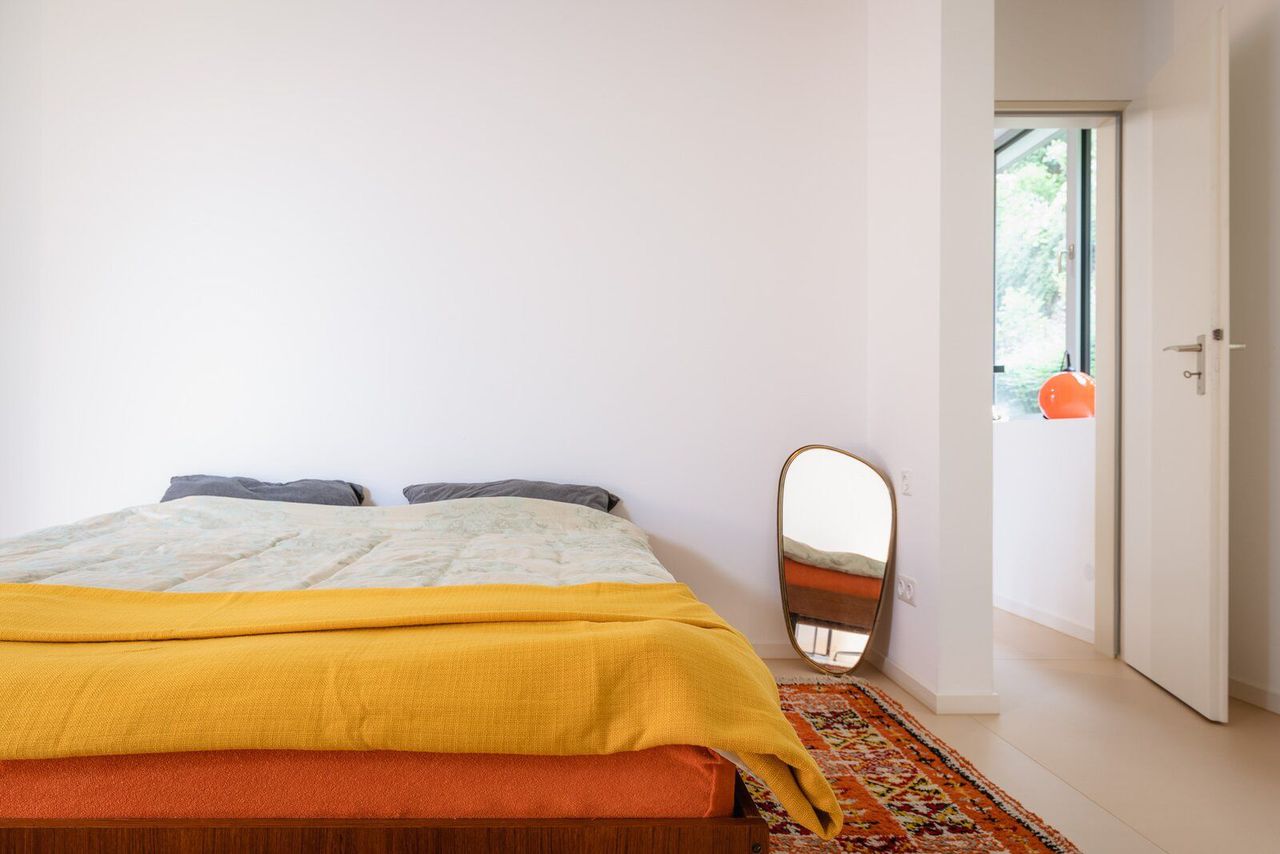 The primary bedroom opens to a pool. 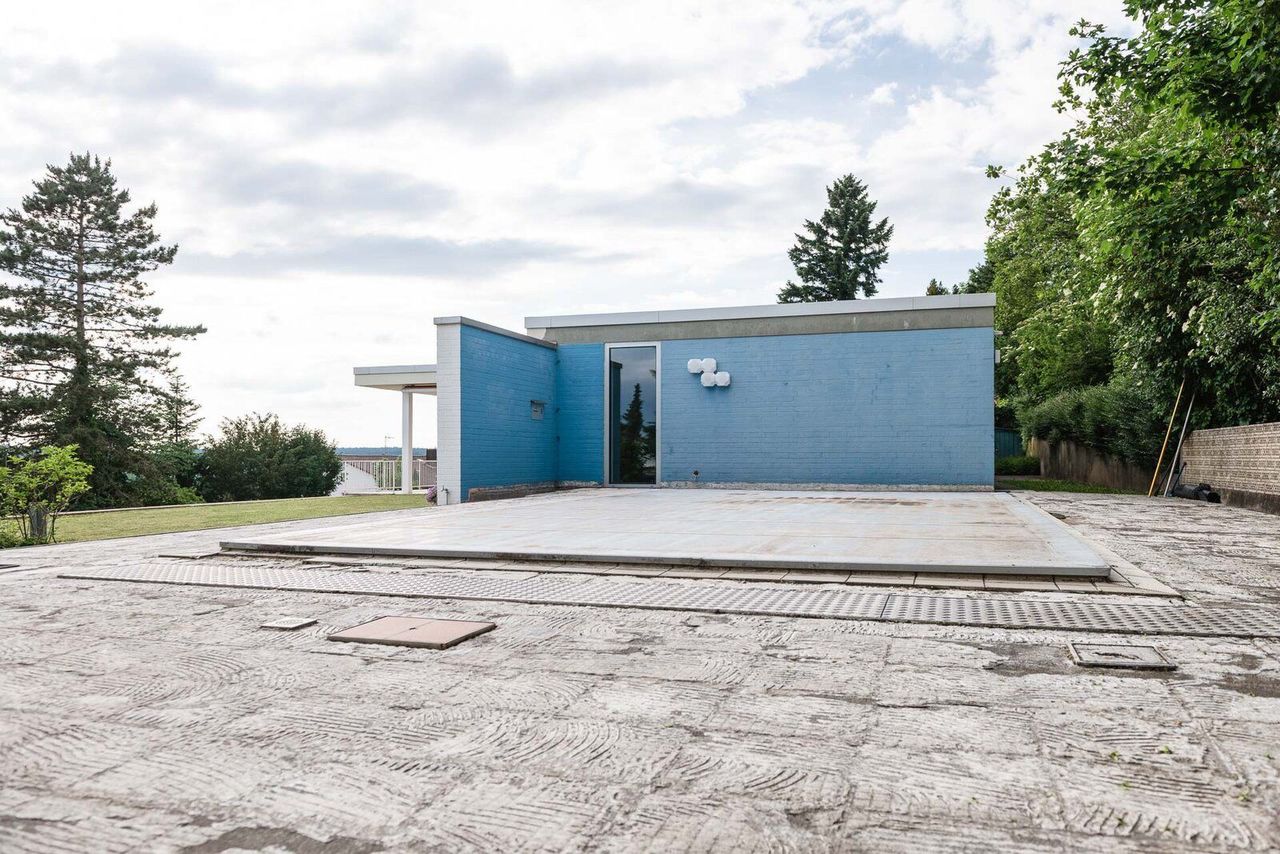 At the back of the home, set behind a brick wall, is a small pool. 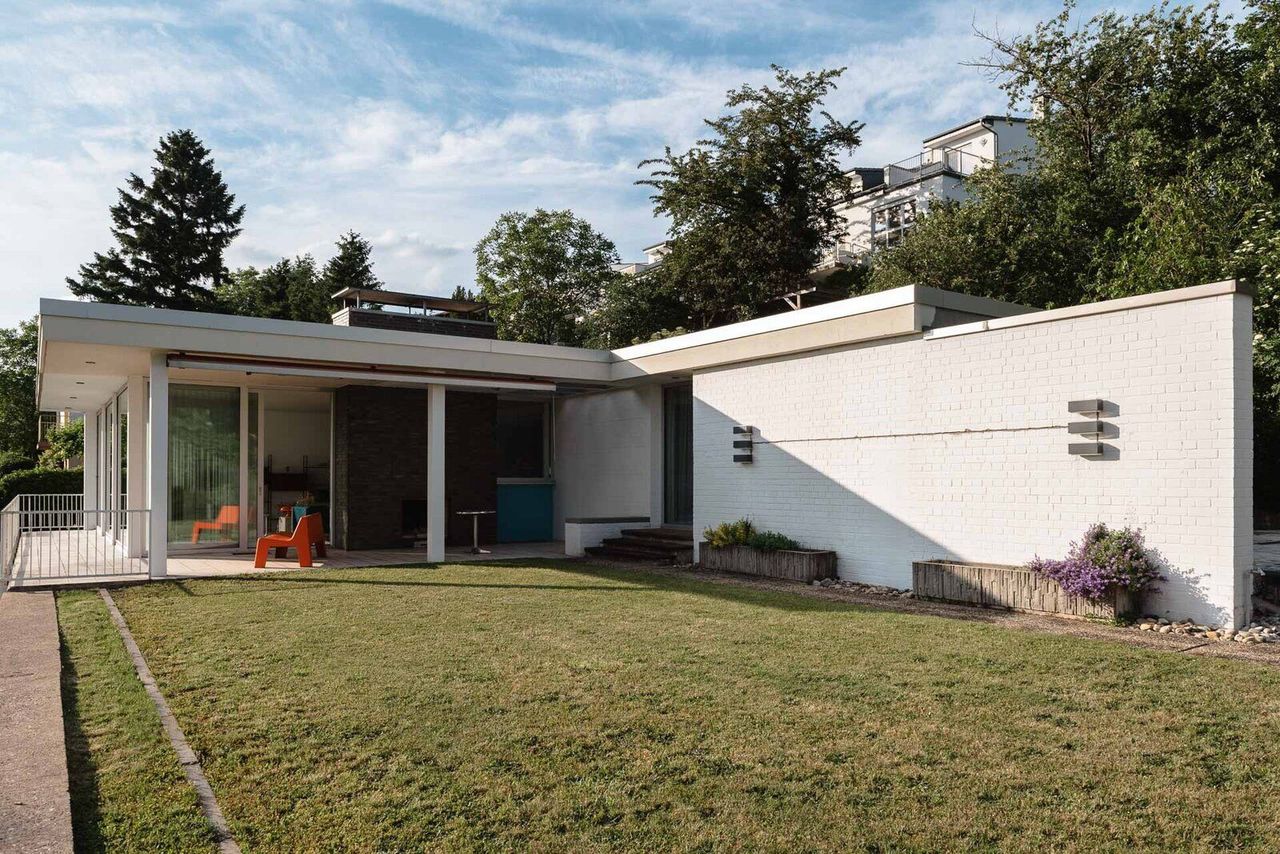 The pool area is set back behind a brick wall for privacy. 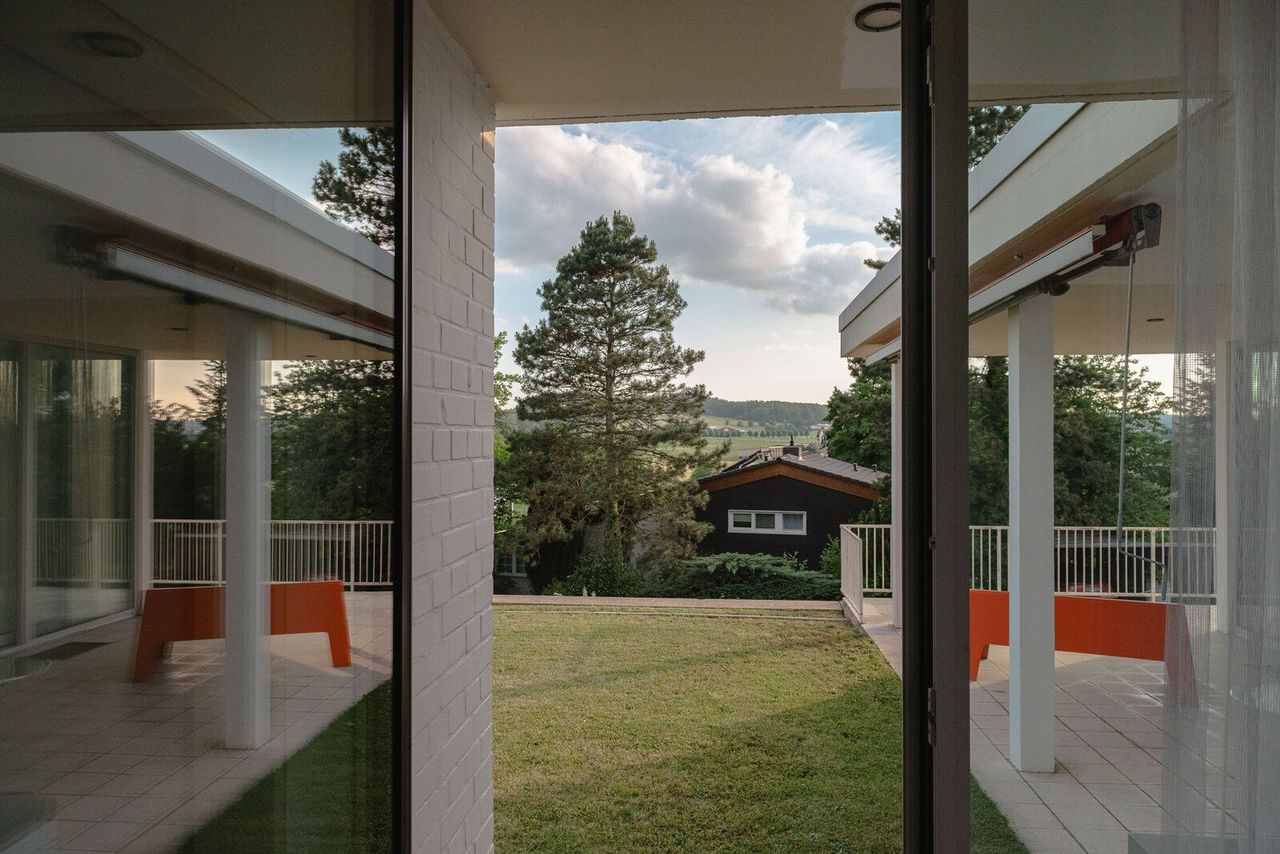 The home boasts an unobstructed view of the Hessian Odenwald mountain range. 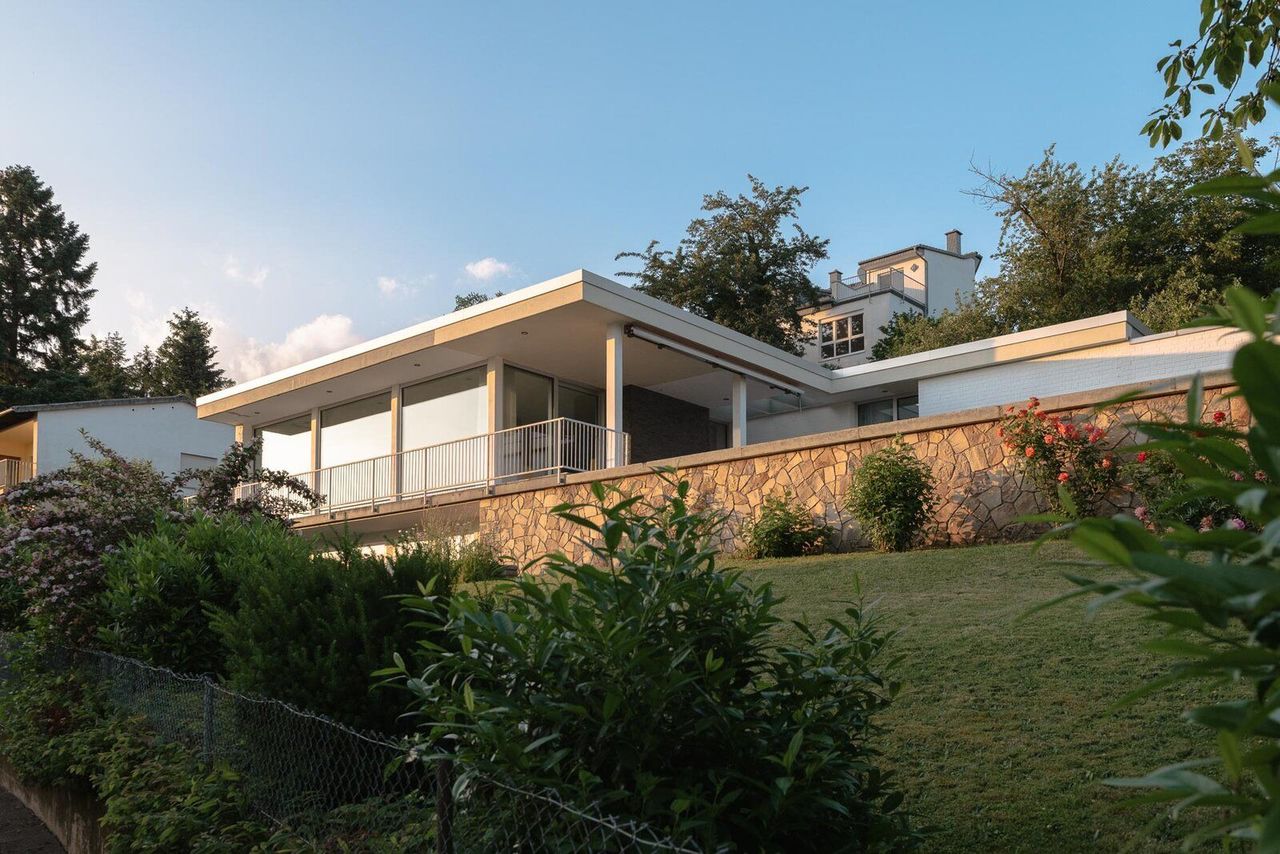 A well-tended garden surrounds the property. 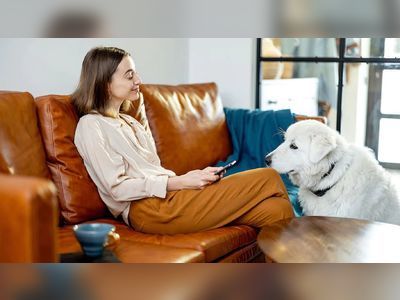