Budapest-based couple Réka Neszmélyi and Balázs Máté live in a small city apartment-but they felt the call of the great outdoors, so they approached architect Tamás Bene to design and build a houseboat getaway on Eastern Hungary’s Lake Tisza. 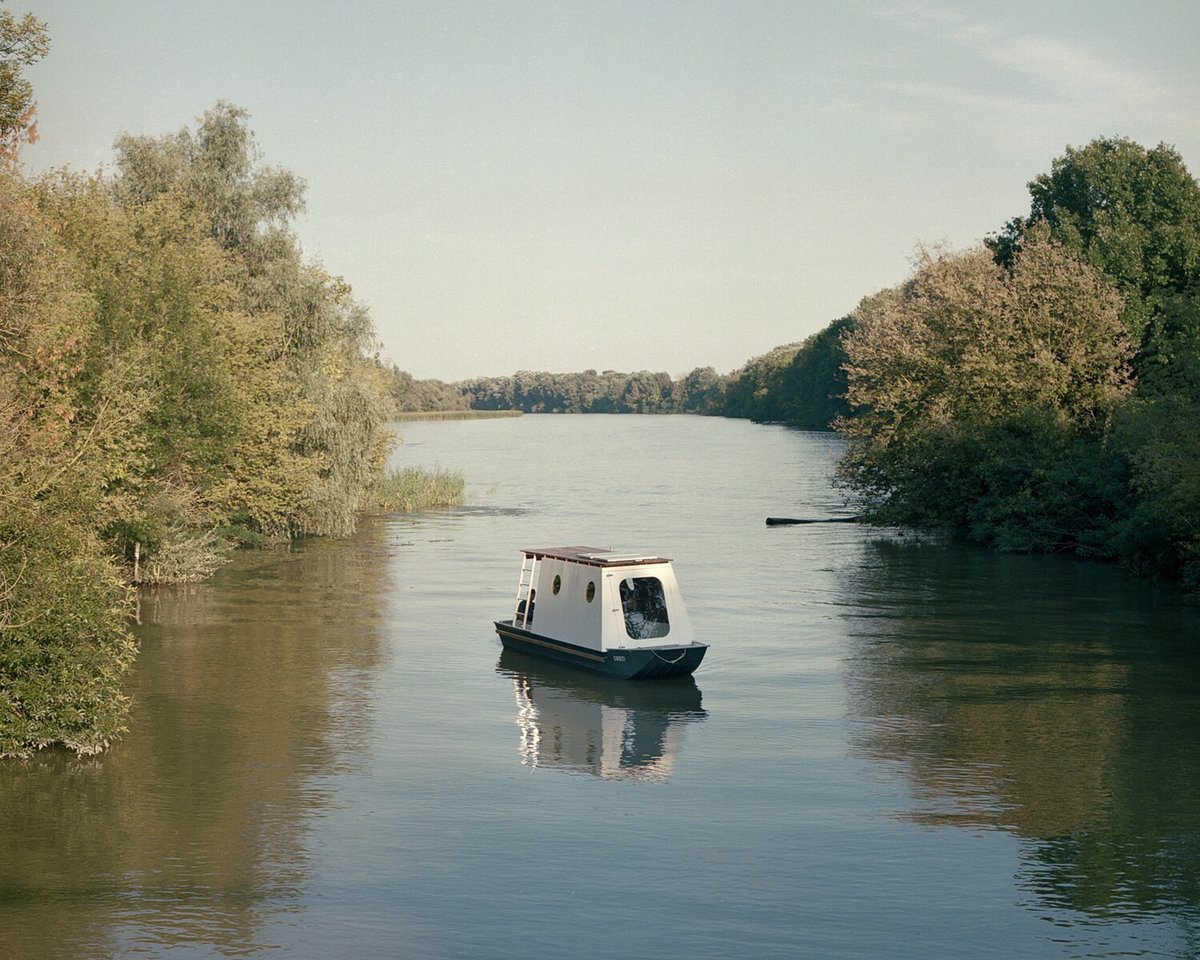 The tiny houseboat, named Sneci, is crafted primarily from wood and aluminum. 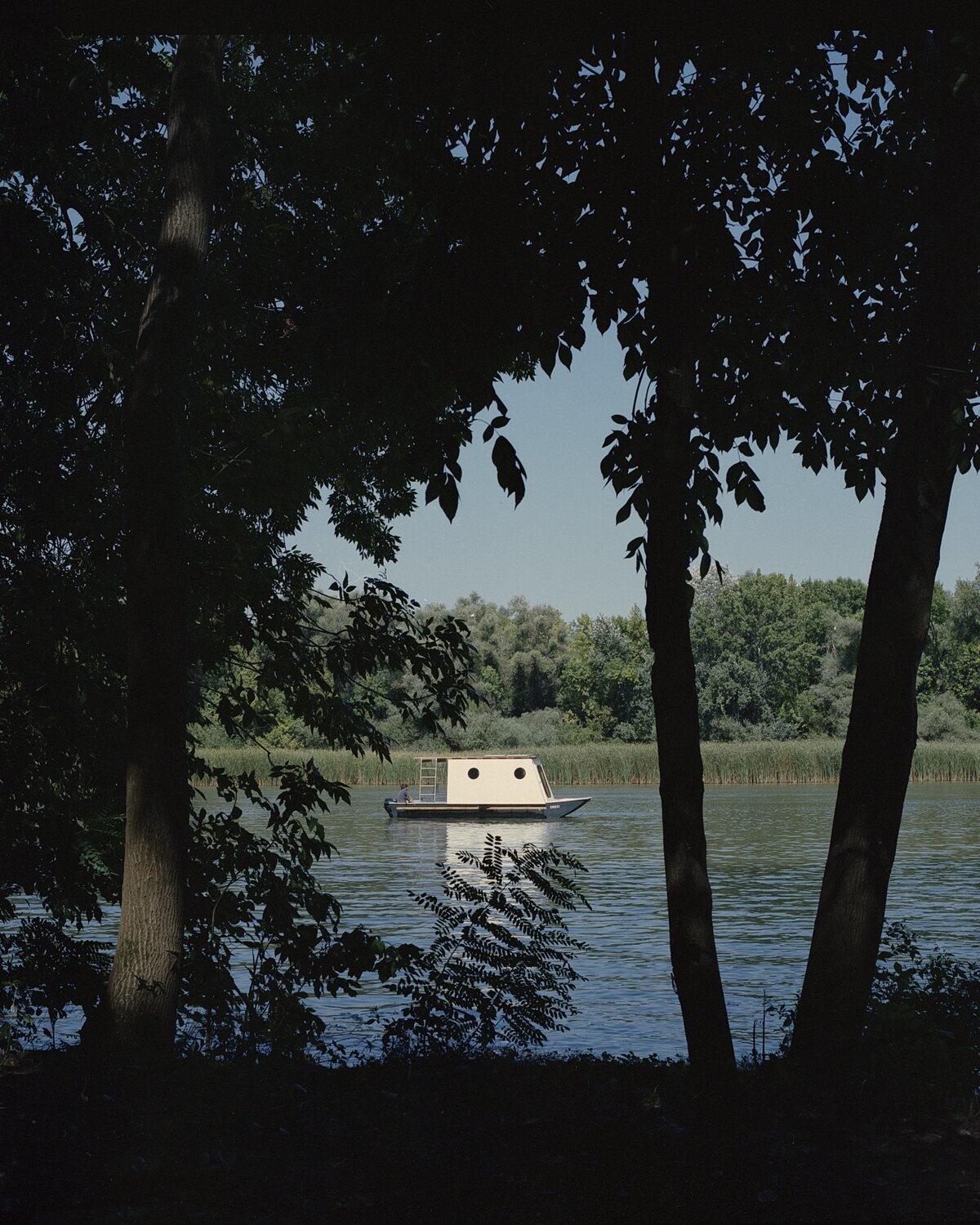 Architect Tamás Bene drew inspiration for the houseboat design from the lake itself, along with local fishing boats and waterside huts.

"The idea sprang primarily from their love of the region, and their desire to learn about it and experience it more deeply," Bene says. "They envisioned a summerhouse that is not grounded and fixed, but that nevertheless has its place in a wider sense—embedded in this particular environment."

Lake Tisza is the second-largest lake in the country, and it provided a great deal of inspiration for the architect and the couple in the planning and design phase. They wanted the boat to pay homage to the local fishing boats and waterside huts as well. "One important inspiration for the overall appearance were the local fishing boats," Bene says. "These boats have no particular designer-each owner imagines and develops their boat according to their own ideas and needs. I tried to relate to this by articulating only small, understated gestures in the boat’s styling, reminiscent of the other boats in the area."

"During the design process, we really wanted the boat to blend in-or at least to assimilate into the natural surroundings of the lake," Bene says.

The exterior of the 23-foot-long boat is crafted from aluminum and redwood cladding. The interior has warm yet sleek look thanks to a mix of Thermowood, redwood, plywood, and aluminum. "The hull is very well insulated, so it’s cool in the summer and stays warm in autumn nights as well," Balázs says. The exterior is clad in a mix of redwood and aluminum. For sleeping under the stars, two benches on the deck can be transformed into single beds and topped with mosquito netting to keep bugs at bay.

While the boat is propelled by a small 9.9-horsepower internal combustion engine, two rooftop solar panels power the headlights, interior lighting, and a small refrigerator-and excess energy is stored in a 180Ah battery. 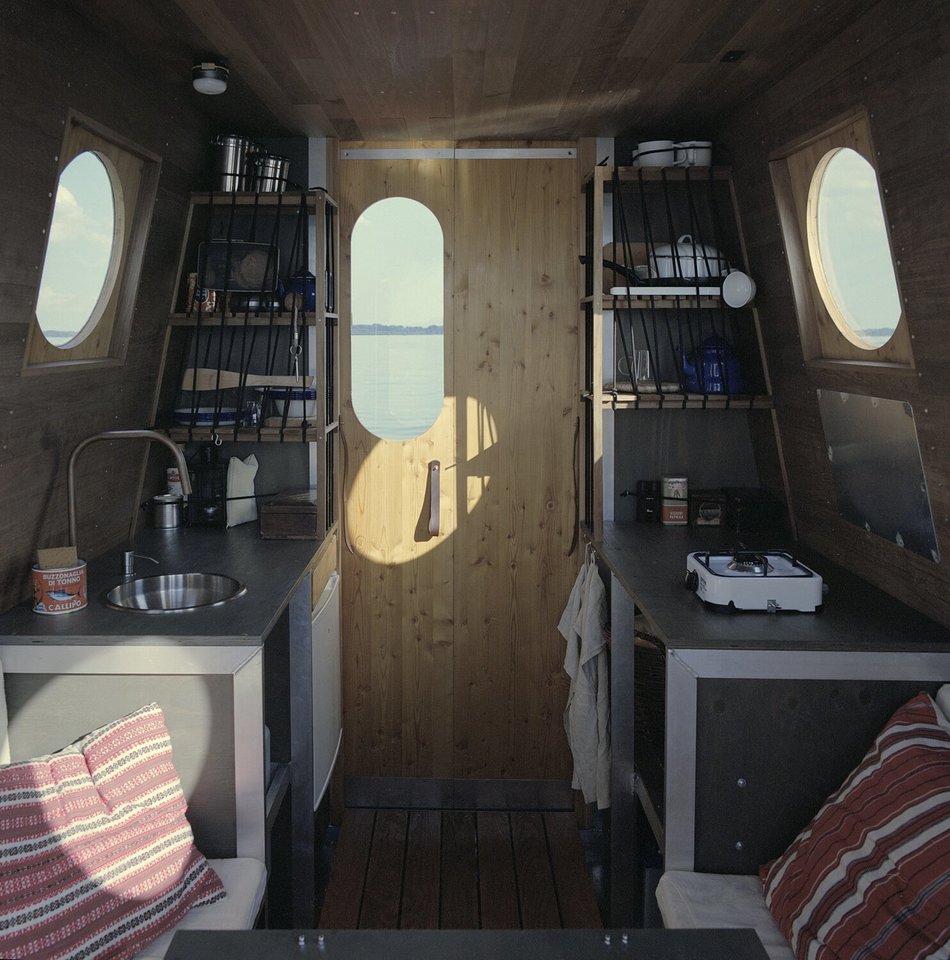 The boat’s cabin is split into two distinct areas-the kitchen and the dining area/bedroom.

At just 65 square feet, the pint-sized interior was designed with two flexible areas-a kitchen and a dining table with benches. Rechargeable lamps can be attached to the hull at various points using magnets, and the dining table easily folds into a double bed. 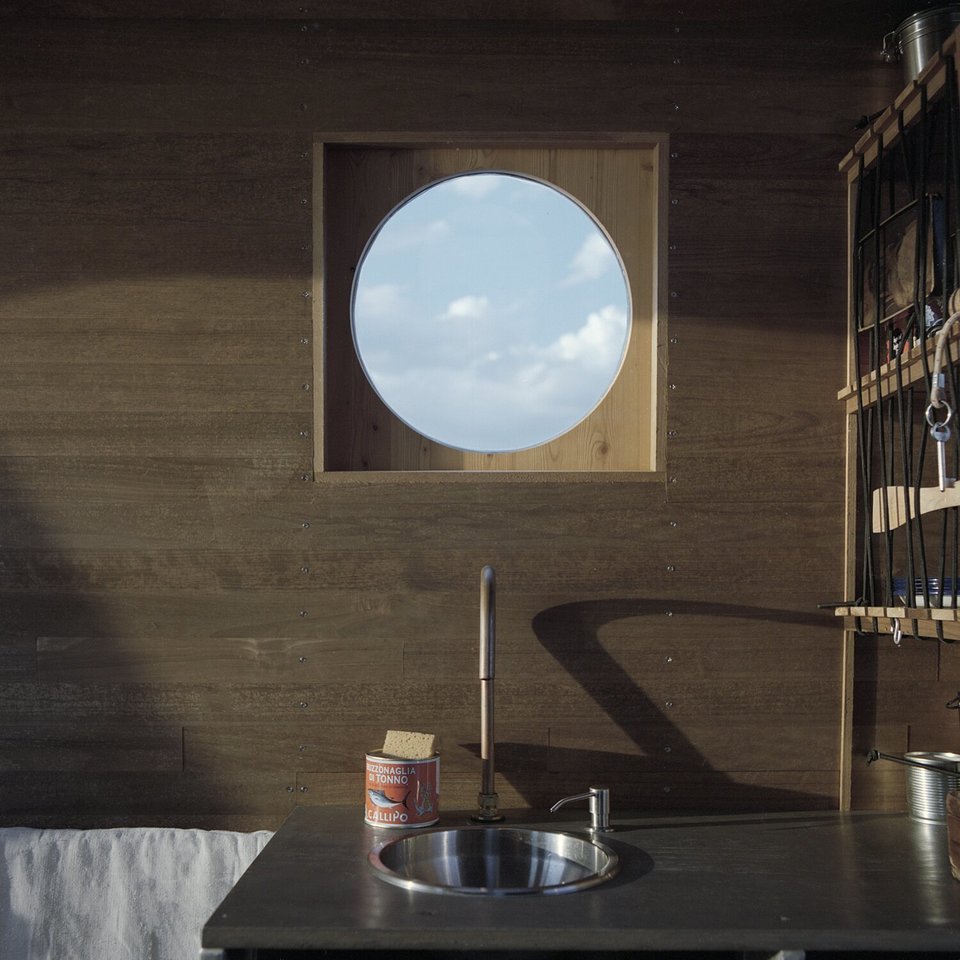 "Drinking water comes from a 20-liter bottle, and can be delivered to the tap with a foot-operated pump, so no electricity is required," Bene says. The bottle can sustain two people for three days.

"Despite its relatively small size, the interior feels quite spacious. Four people can comfortably have dinner together," Réka says. "During the summer, in addition to the double bed inside, the two benches on the rear deck can be used as two extra single beds. Mosquito nets can be easily installed on the rear deck and over the front window to protect us throughout the night."

The architect and clients carefully planned the space during the design phase to ensure that each item has its own dedicated place, and didn’t add unnecessary clutter. "When finding a place for everything, we also had to keep in mind that the boat has to be well balanced-that is why the interior is so symmetrical," Bene says. 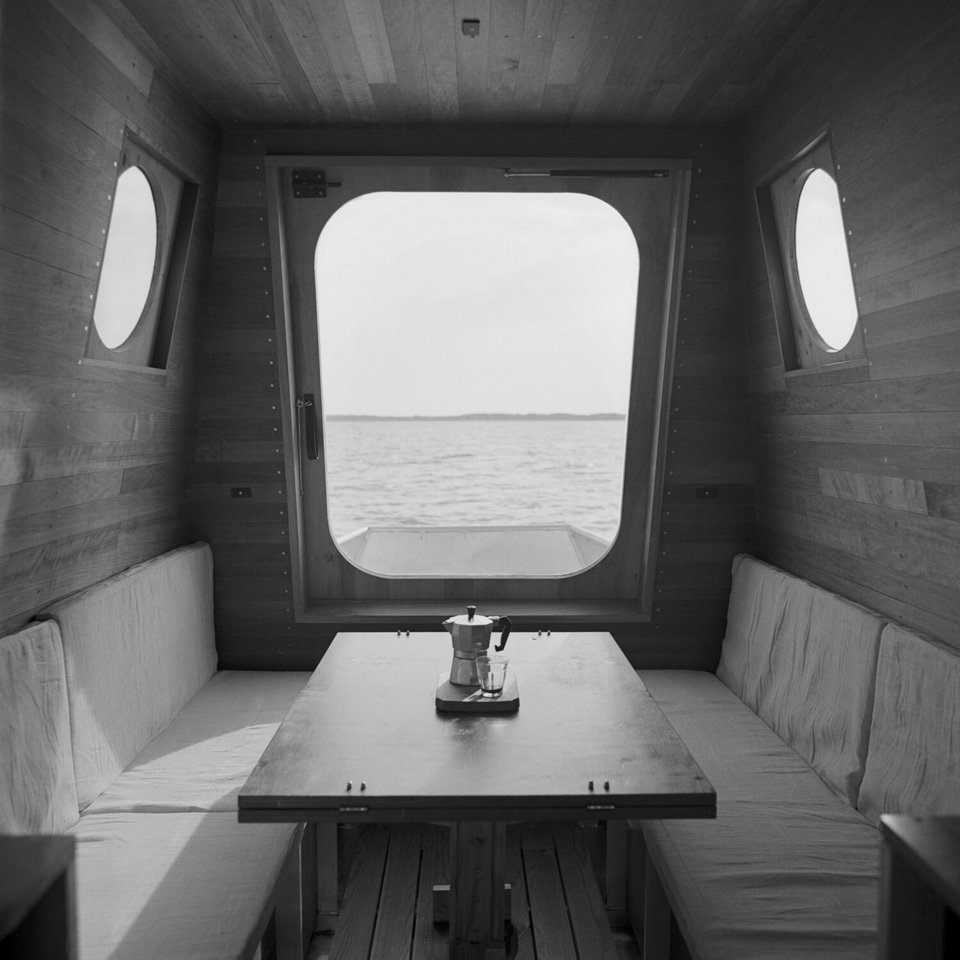 "The benches on the two sides of the dining table hide roomy containers that are accessible during the night as well," Bene says. "There are other storage spaces in the boat-for example, the prow is accessible from inside, and it gives us extra room to store equipment." 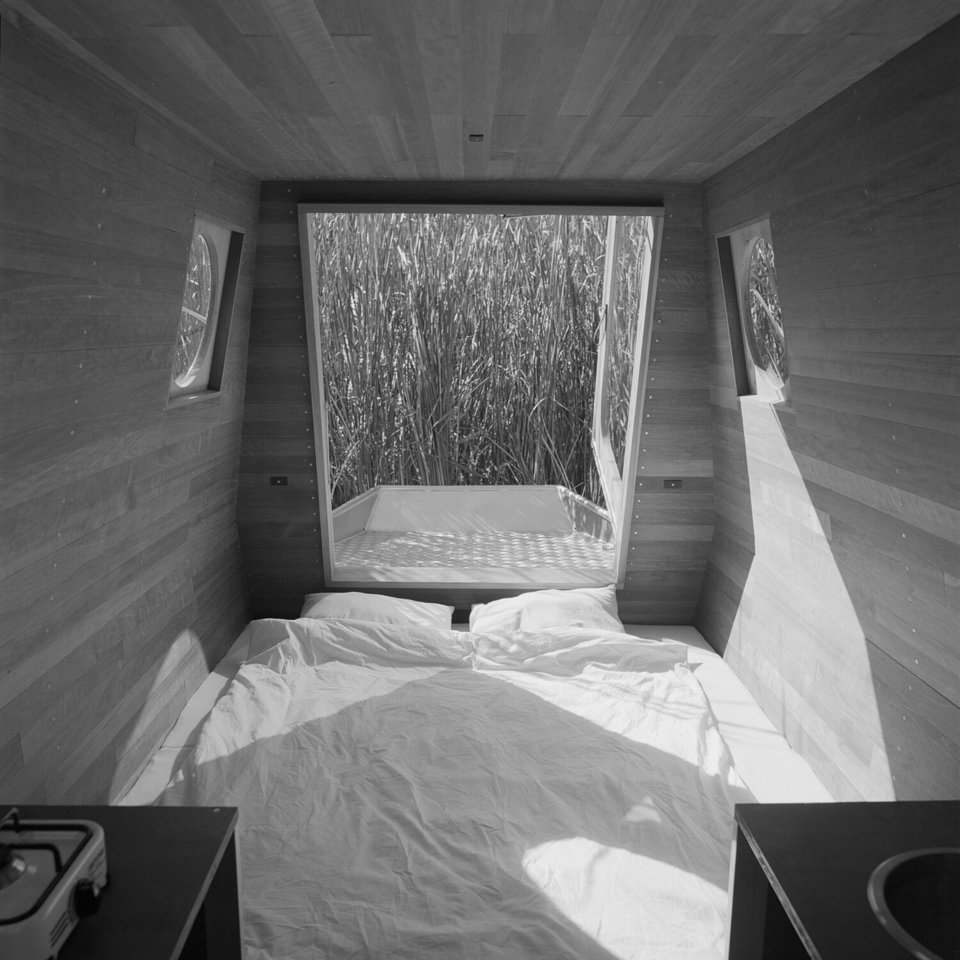 The dining table folds down into a double bed.

Comforts of home include a small refrigerator, a gas stove, a dry toilet, and an inverter so the couple can use their laptops on board. 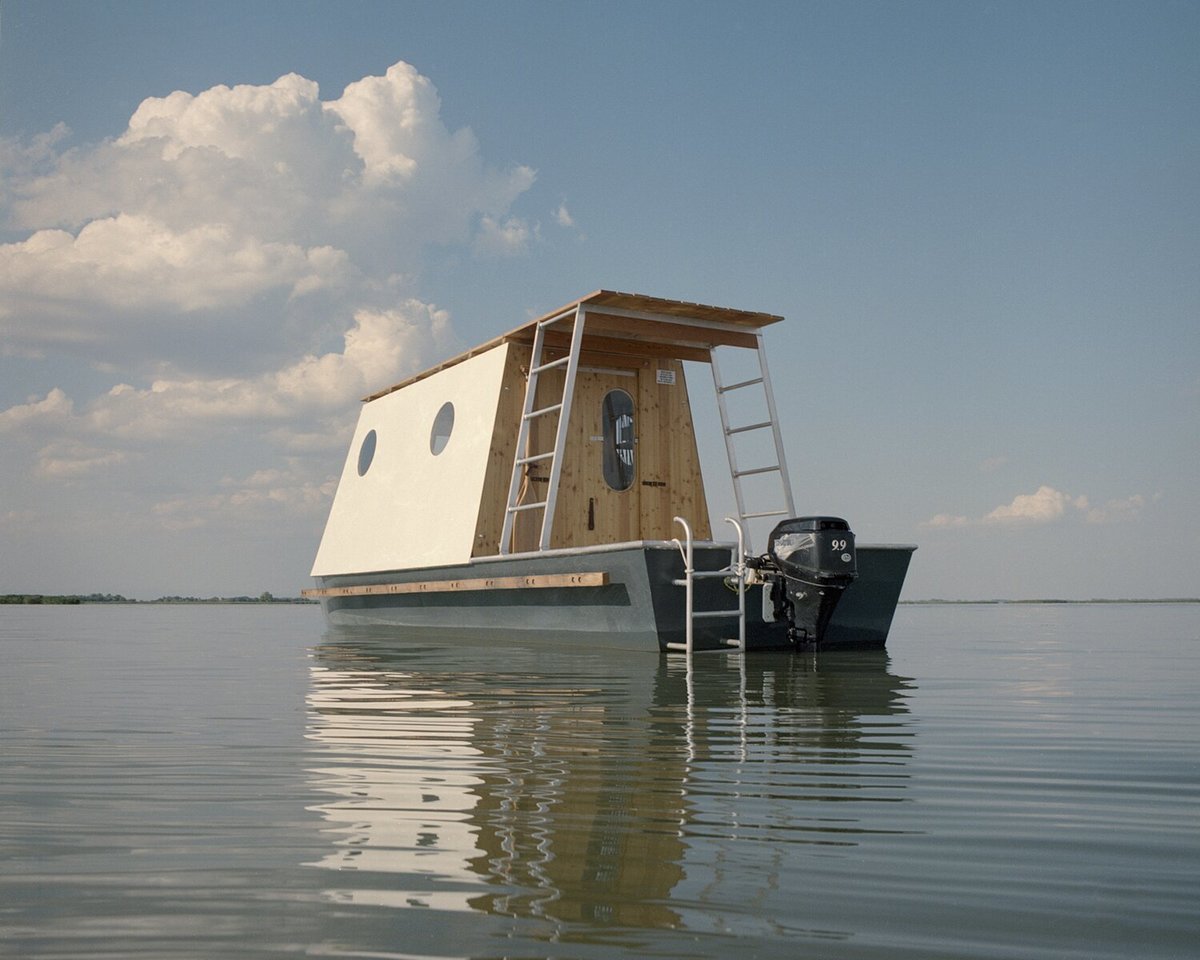 "One of the most important problems we had to deal with was how we used the space available," says Bene. "We installed a sliding door between the interior and the open rear deck, which saved a lot of space and means that the door never blocks the view or the way."

"The main intention of the boat is to have a seasonal getaway that lets us get in contact with this exciting environment, and experience it on a more intimate level," Balázs says. "We normally make short trips with it-three to four days or more-and we usually spend each night somewhere different. But sometimes we spend days in one place if we like it there. In the coming up year, we are planning to make longer, several-week-long trips with it." "As an architect, I found it highly interesting to conceptualize and design a living space that has no tangible groundwork or foundations," Bene says. "The boat gives us an opportunity to spend time, eat, drink, sleep, and awaken nearly anywhere, while blurring the boundaries between our personal selves and nature."