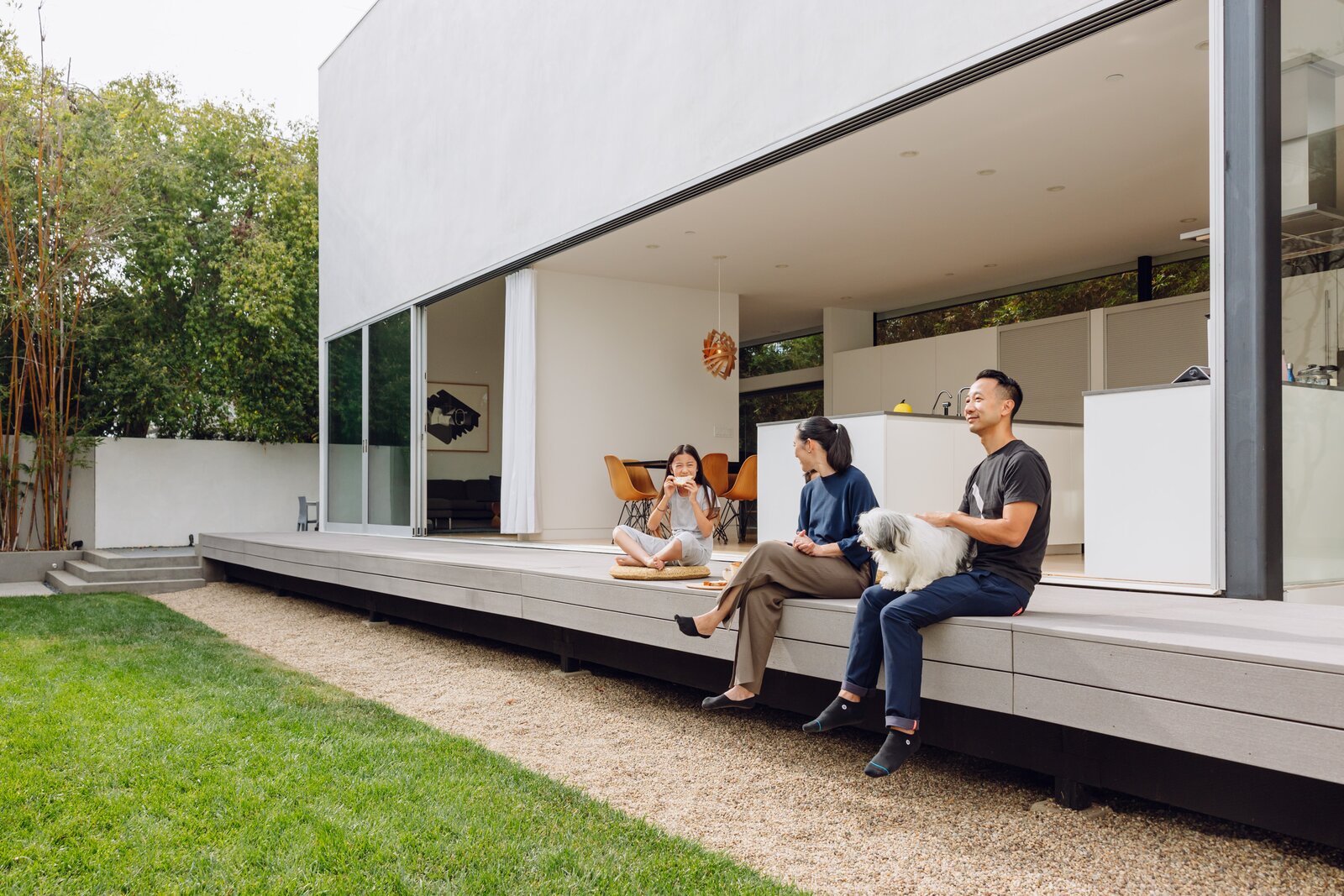 Japan may be 5,520 miles from Los Angeles, but in Culver City you’ll discover a tiny piece of the country in a residence called the L House. David and Mayuko Lai met in Tokyo, Japan, when David lived there during a high school exchange program. The two became pen pals, eventually married, and built this home for their family of five in the spirit of the place where they first met.

"I grew up in Japan, so I wanted to incorporate Japanese design into this house," says Mayuko. The couple perused Japanese architecture books filled with homes that were hundreds of years old to create what David calls a "modern reinterpretation of Japanese elements." 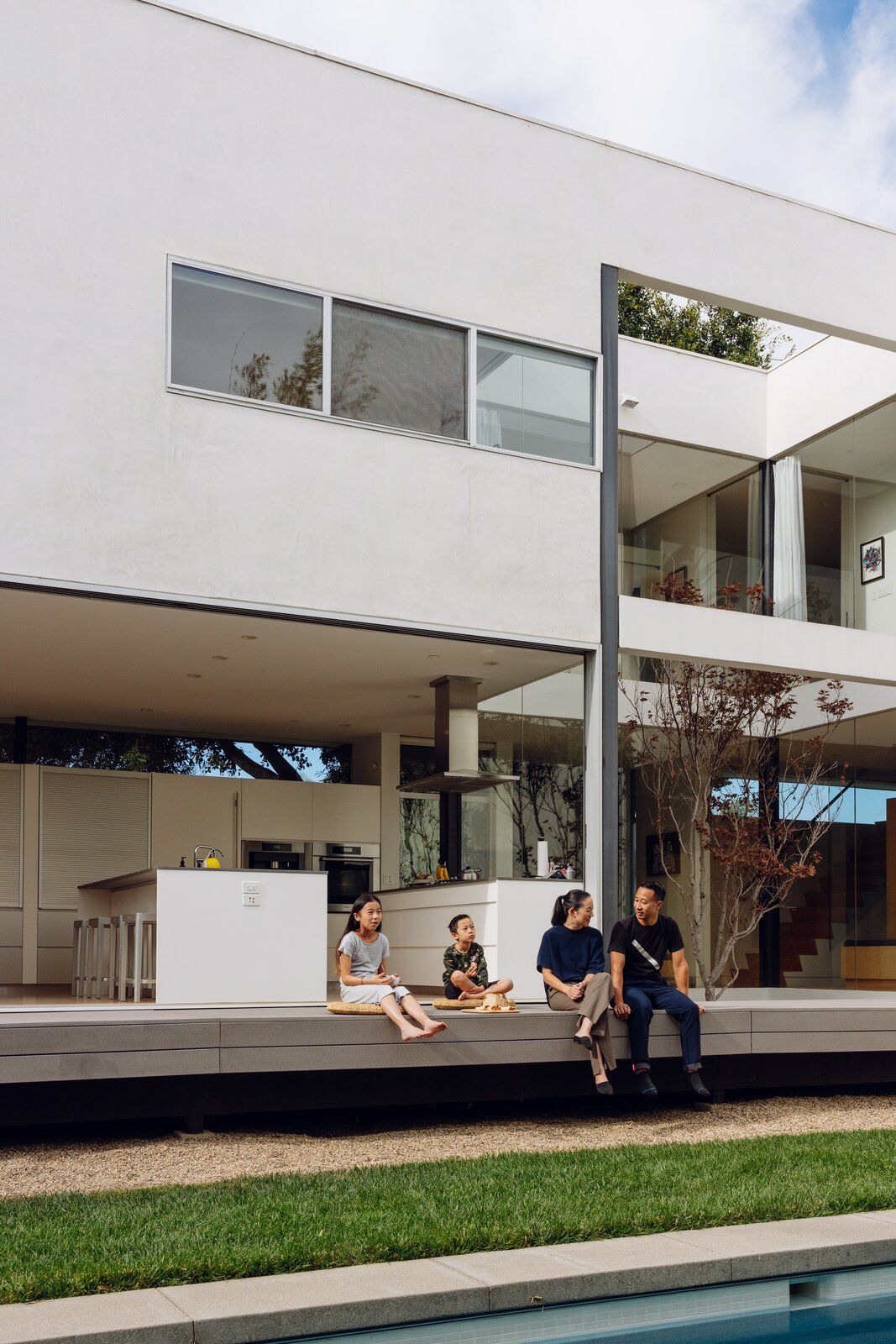 Special care was taken to make the L House appear to float above the ground.

Although the plot of land provided enough room to build a large house, they opted to design a smaller home in which they could creatively utilize every inch of space. As Mayuko explains, "Japanese houses are so small, but they’re really good at thinking about how to use the space." 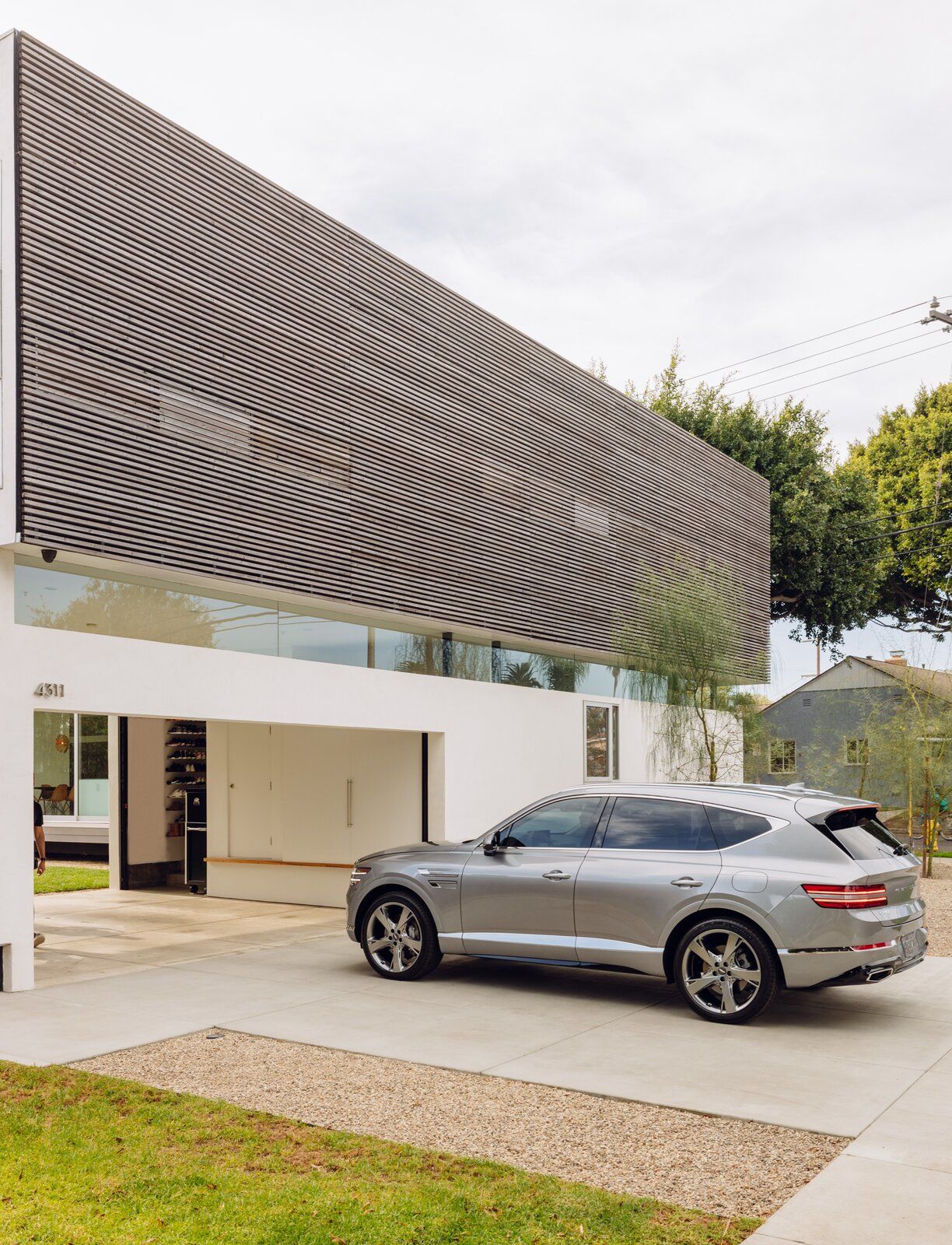 A Genesis GV80 sits in front of the Lais’ Japanese-inspired modern home in Culver City.

As the name implies, L House is shaped like an "L" with the interior courtyard overlooking a lap pool. The top level of the street-facing facade is covered in unsealed larch wood, a material commonly found in Japanese design that naturally patinas and ages to a gray color. Fashioned as a wood screen, it provides privacy and sun protection to the second-floor windows. The home also features small courtyard gardens, like those in Kyoto, and a five-foot engawa deck that floats off the ground. 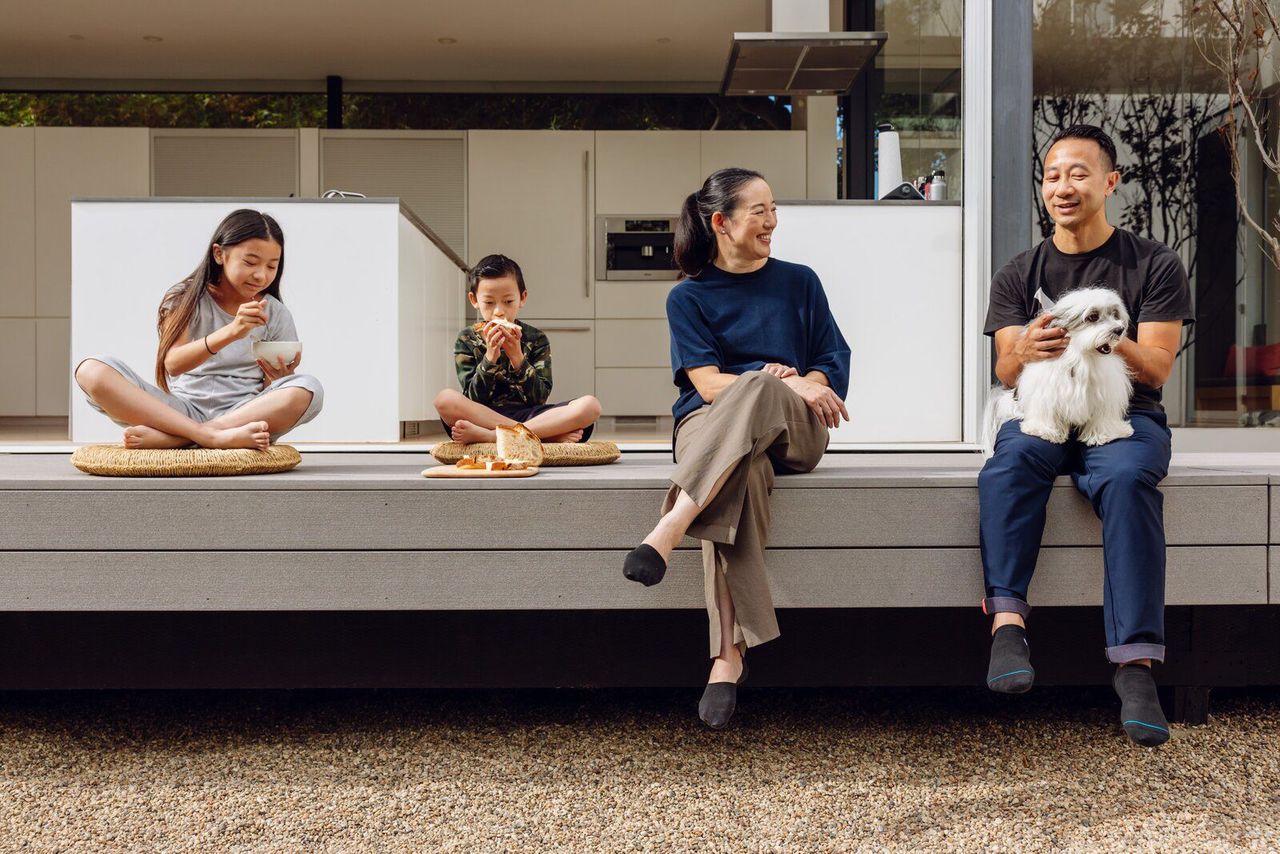 David and Mayuko Lai designed the home to transform and evolve for their family of five.

"The idea of the house floating was a core concept with the architect, and a lot of time was spent really thinking about that," David says.

The interior sawtooth metal staircase is another "floating" design feature. Mayuko and David occasionally sit on the stairs with their dog Panda and wave—while appearing to levitate in midair—to neighbors walking by. 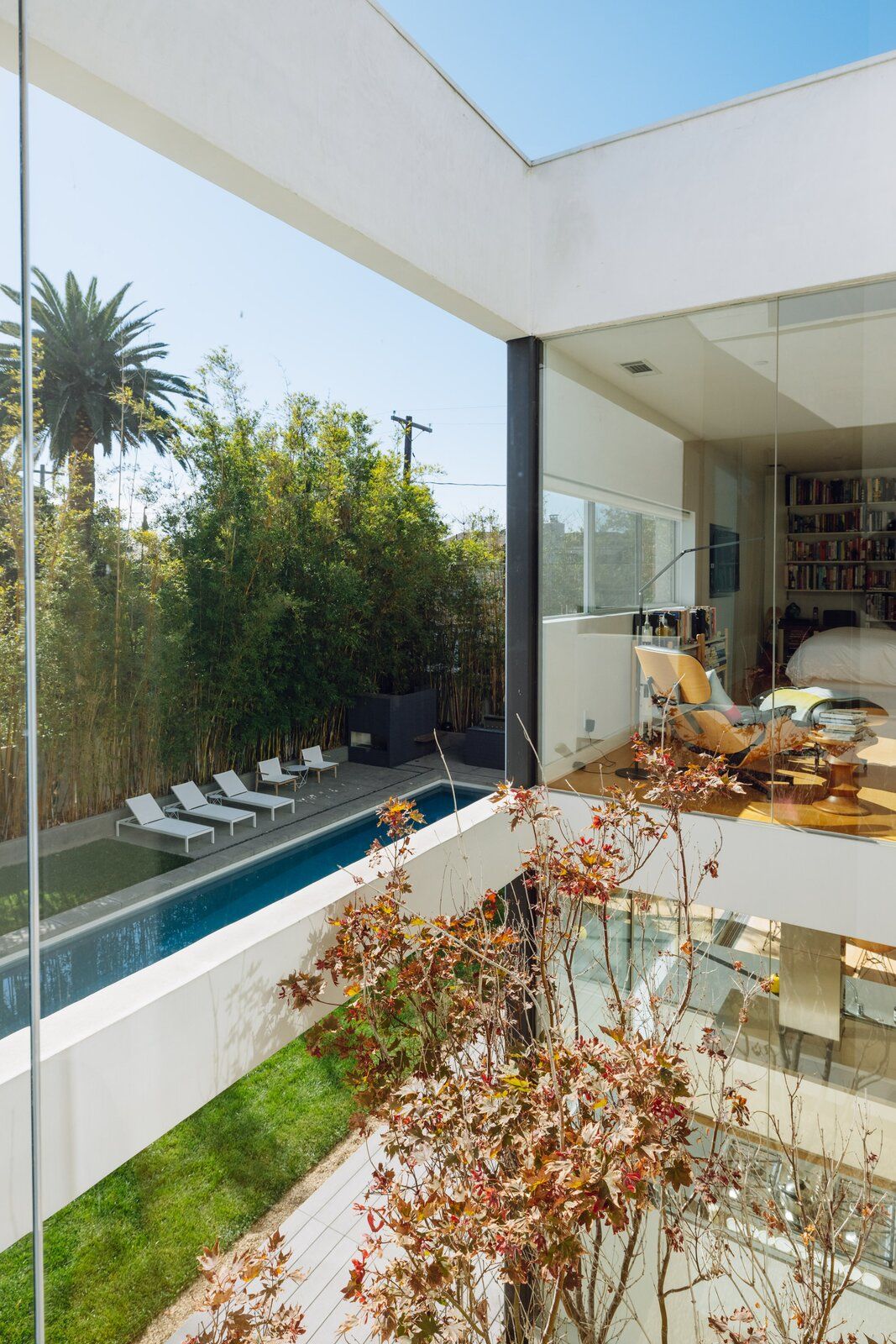 The Lais integrated large glass walls to bring in natural light and views, so they could enjoy the outdoors while inside.

Upstairs are the family rooms, and downstairs, an open floor plan that features neutral tones, simple furniture, and maple floors and cabinetry. A Japanese maple tree that grows in the middle of the home is the grand centerpiece. Floor-to-ceiling glass walls—and what appears to be a complete lack of doors—make the tree visible from most spaces. 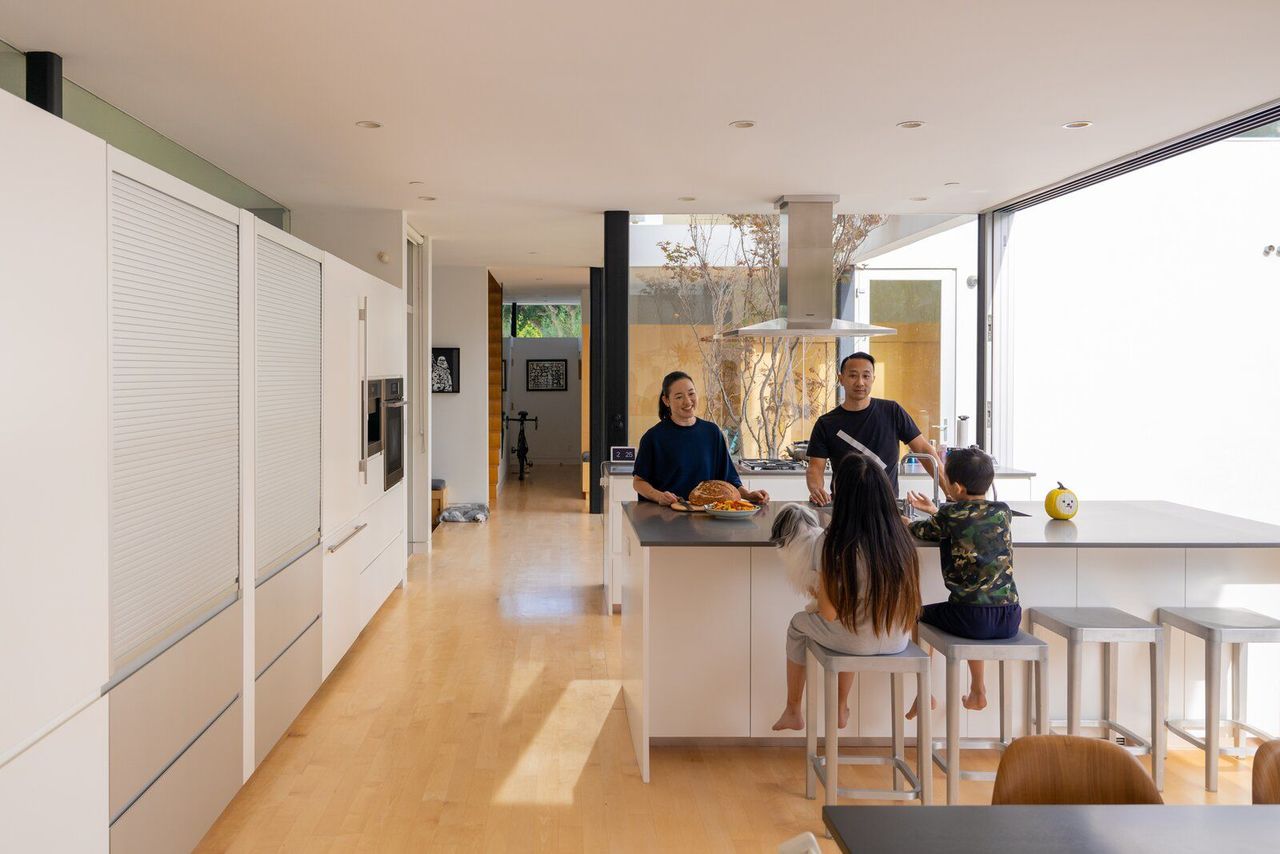 Pocket doors lend an openness to the space that complements the Lai family’s lifestyle.

"For us, having a door is a waste. I thought it would be nice to have a pocket door in each room that we can leave open, so we know what the kids are doing," said Mayuko. "I think that really helps create more openness."

The doors aren’t the only concealed elements of the house. In fact, hidden features are a central tenet of the design. "I think the best design is somewhat hidden," said David. "It's something you experience." The Lais control the pool’s temperature and maintenance through an app on their phone.

Take the home’s technology: The solar panels are hidden on the roof, while cables in the office are tucked behind trays. You can’t see that the pool is connected to the internet and controlled by an app, or that sensors in the bathroom and kitchen detect when someone enters, prompting the tankless water heater to begin heating recycled cold water. Storage has also been masterfully designed to secret away unsightly items. The kitchen is outfitted with aluminum "garage" doors that slide down to hide appliances like the microwave and rice cooker. A concealed hamper in the bathroom delivers dirty clothes right next to the washing machine. In the garage, bikes, cleaning supplies, and other items are hidden behind two big sliding doors.

But the crafty storage elements in the bathroom and garage are not what make these two spaces particularly special. 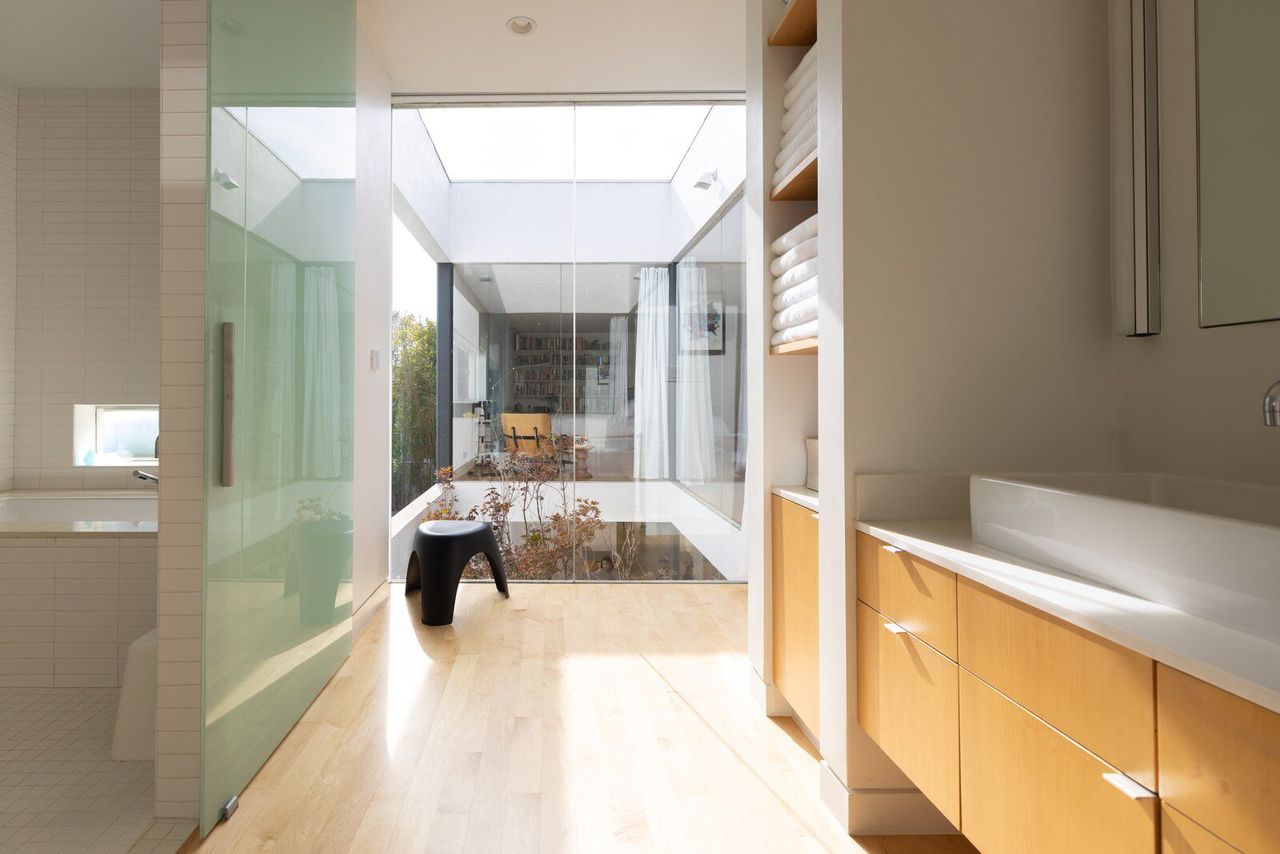 As in traditional Japanese homes, L House has a single bathroom with a large bathtub and separate wash area.

"Instead of having a shower in each room, we just have a central bathroom that all the family uses," said Mayuko. Designed like a Japanese bathhouse, the bathroom has a separate wash area from the shower and bathtub. After seeing a commercial building in Japan with double sliding doors, David Lai decided to install them in his own garage. A Genesis GV80 stands in space, which opens completely to the street and the backyard.

As for the garage, it’s unlike most in that the doors open on both sides. One opening leads to the street, and the other looks onto the pool. This design feature was also inspired by Japan.

"I was in Japan, and we were visiting family and friends, and I remember seeing a commercial building that had doors like that," David says. "It sparked an idea: Why wouldn’t you make a garage like that?" A view of the garage and the Genesis GV80 from the street. The garage occasionally doubles as a pavilion for birthday parties or small events.

Like the pocket doors inside the home, the roll-up garage doors disappear, providing the family with the ability to transform the space into a pavilion for birthday parties, or whatever they need it to be at the time.

From the doors to the hidden storage and larch wood screen, L house was designed in the spirit of the Japanese, who have been crafting highly functional, efficient homes for centuries. The Lais have adapted traditional Japanese design elements in a way that will allow them to continually transform the dwelling to fit their needs for the rest of their lives. 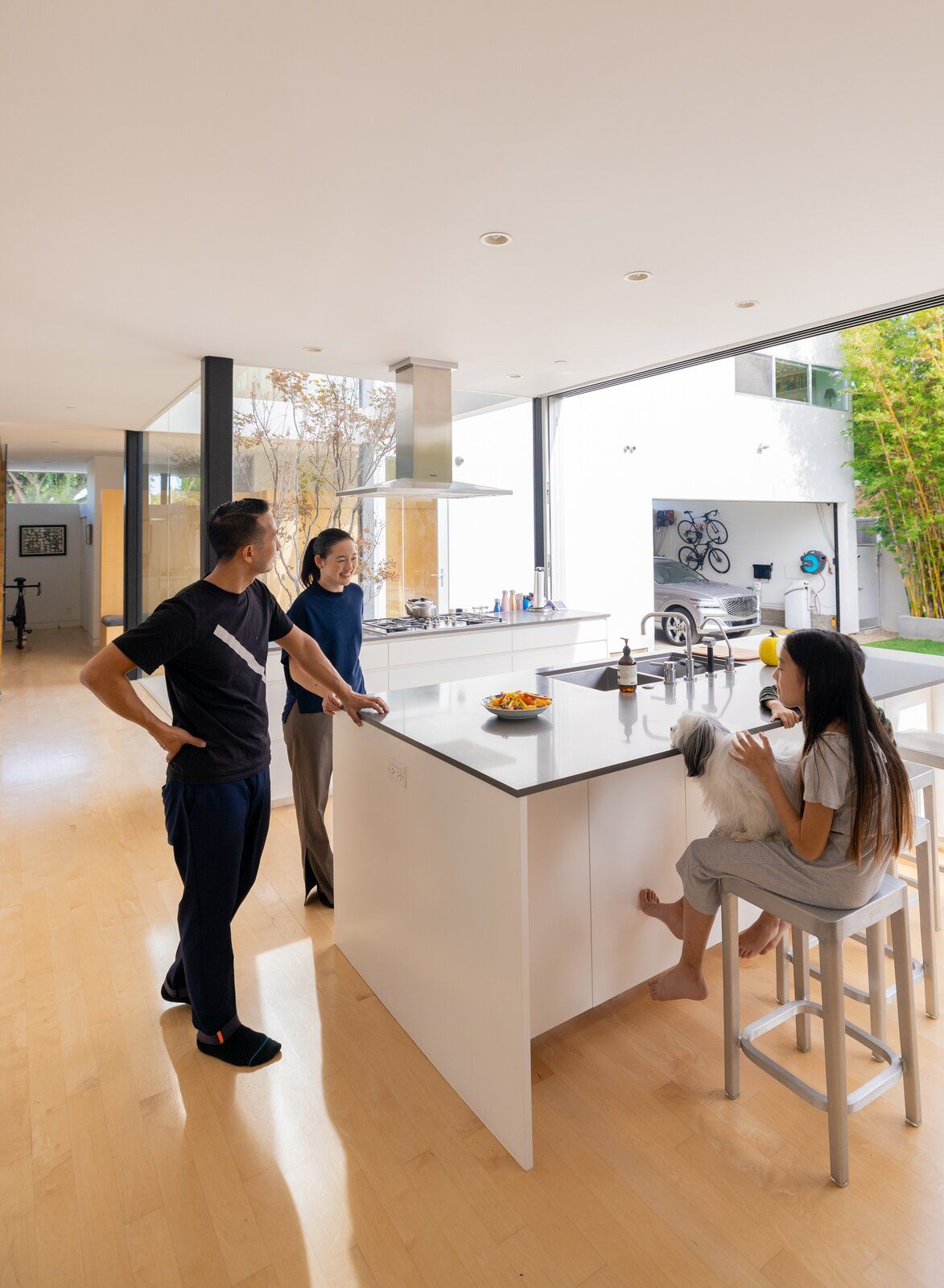 Sliding glass walls open the kitchen to the outdoor courtyard, providing more space for the Lai family to enjoy. The lower level has open sight lines to the courtyard and the garage, where a Genesis GV80 sits.

"I feel like this home is still an experiment," said David. "We’re still learning and changing things as we learn how to live here." The L House is designed to transform and evolve for David and Mayuko’s family of five. A Genesis GV80 sits in the driveway, echoing the home’s streamlined contemporary facade.